Editor’s Note: It will surprise no-one to learn that Andy Green spends a significant amount of time each month in cafés, handling watches – of fairly staggering scope and value – and meeting people. That was pretty much our brief to him when we started working with Andy officially back in the early days of Time+Tide. Go forth. Get buzzed. Take photos. We called the position the ‘Community Engagement Officer’. Whether or not we can take credit for creating the single origin snuffling watch monster he’s become, decorated almost daily in mouthwatering wristcandy, is debatable. But the fact is, we may have, and we feel it’s time we published his diary. Passed on his stories. They’re too good not to share. The column is called Spotted! by AG The idea is that it’s the people and the timepieces he spotted in recent times. If you’re wondering about the exclamation mark, it’s intentional. Have you met Andy in person? There will be passion. If you want to be #spottedbyag you know what to do, drop him a line at andy.green@timeandtidewatches.com We’ll look forward to reading about you right here in months to come! Thanks Andy, and all in our wider community for making Time+Tide what we are – Andrew 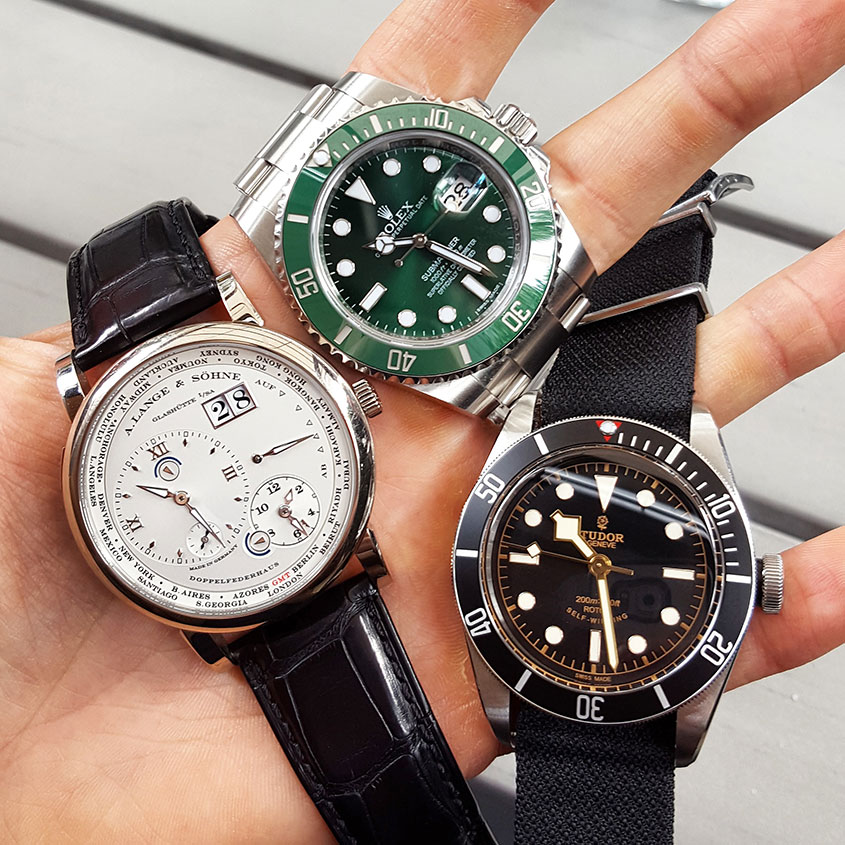 The last four weeks have been busy given that we’re gearing up for the holiday period. Spring in Melbourne. It’s a beautiful thing, horses or not. Early on, I managed to sneak in one last brunch with with @watchJRG and the super-talented tattoo artist, watch nerd and all round nice guy Benjamin Laukis before he shot off for (yet another) tattoo-convention / euro-trip. 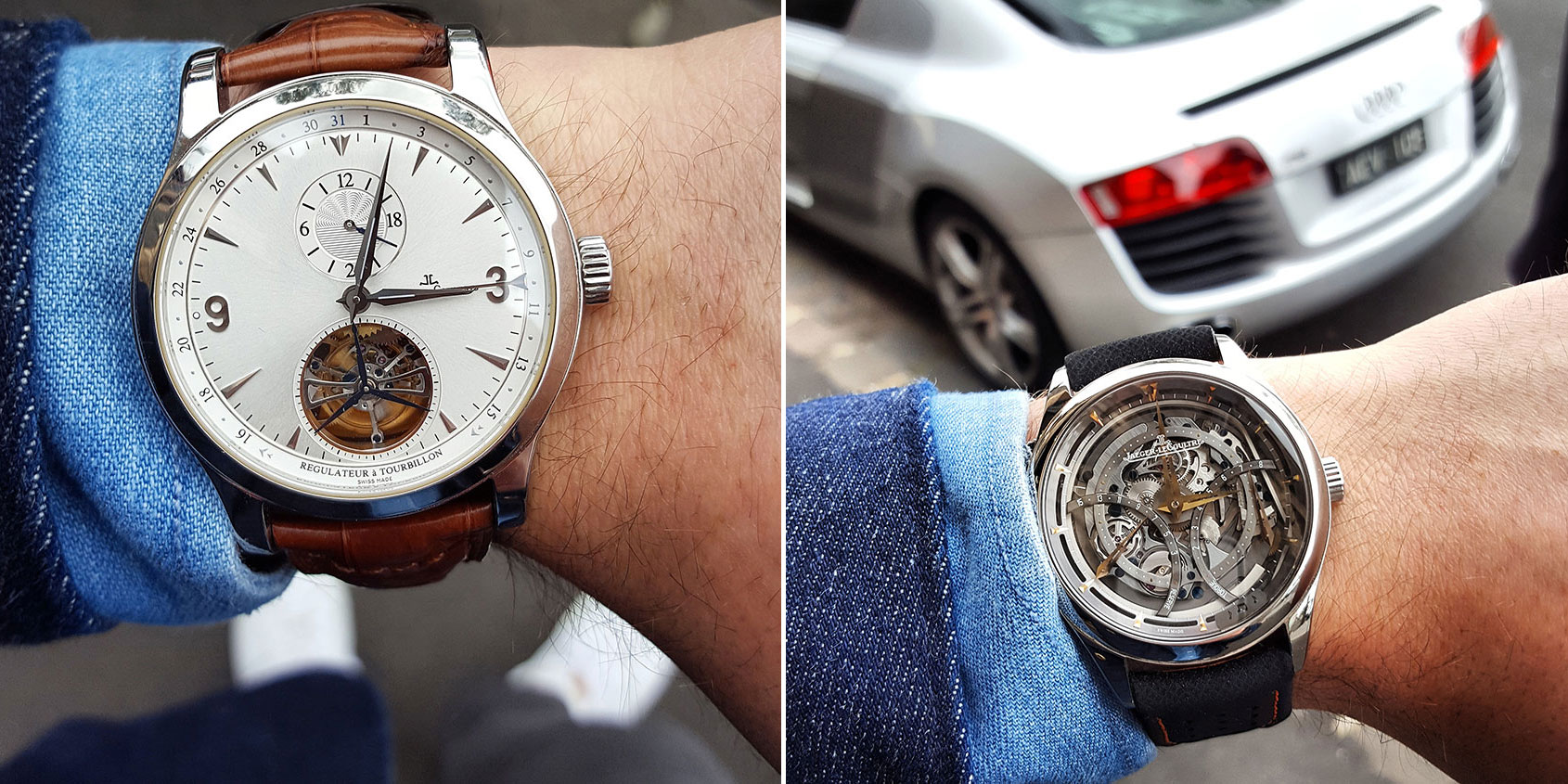 I also stopped past a favourite spot of mine, Dutton’s Garage (it’s one crazy place, but cars and watches go together like hand in glove), and met up with local lads Glenn (@Syn_Chronus) and Frank (@petiteseconde). Both were rocking some of Jaeger-LeCoultre’s more complicated options (the JLC Master Tourbillon Dual Time is Glenn and the JLC Grand Tradition Striking Time is Frank). I tried to trade Frank’s JLC for a Bentley, but he wasn’t that keen. It’s great to see classical pieces being worn by young collectors. 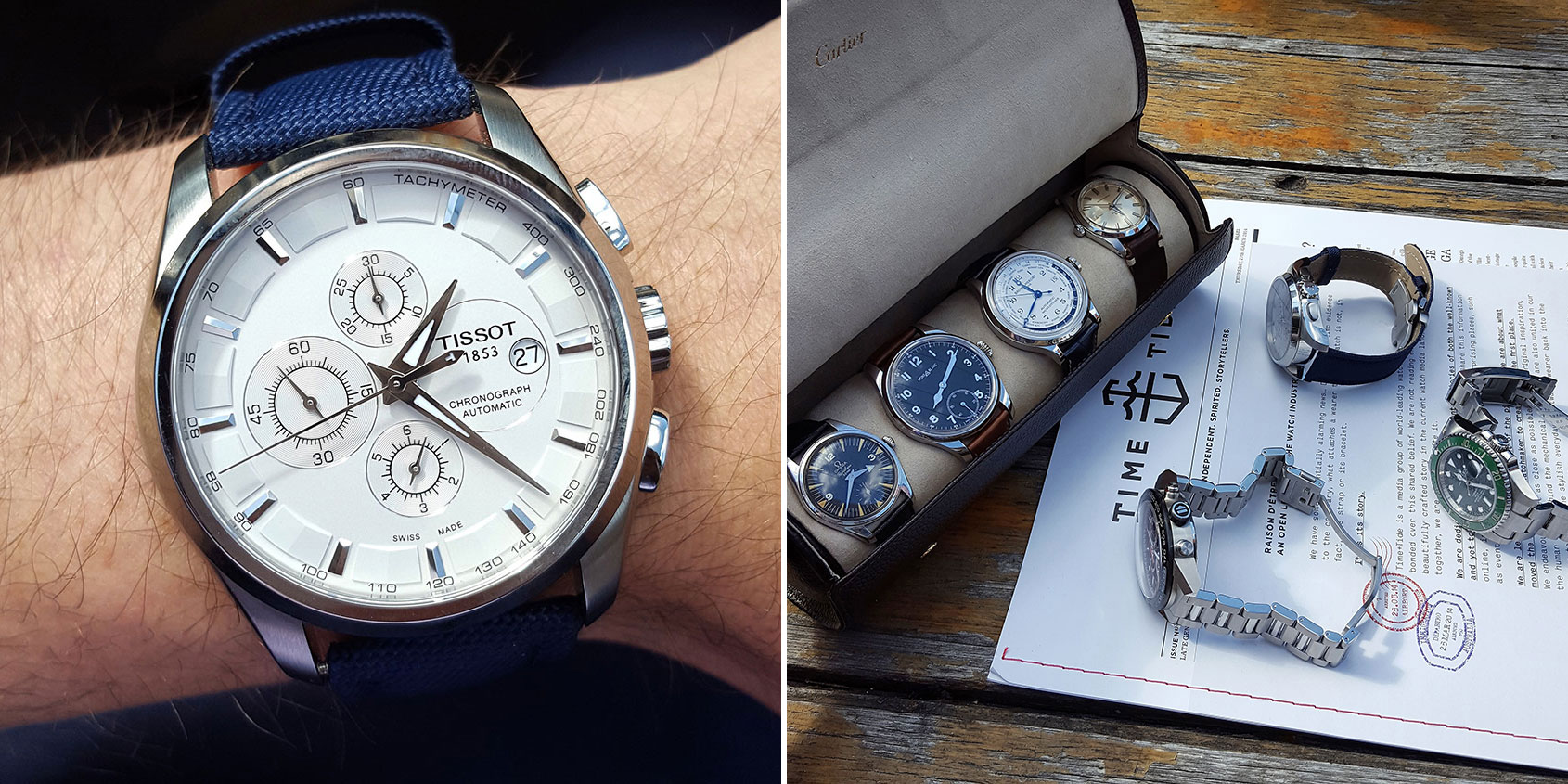 Hawks player Taylor Duryea’s / @docduryea Tissot Premiership Watch, earned in the 2015 AFL Grand Final and a brace of watches we dug out of the T+T safe

Later on in the month, dual AFL premiership player (and legend), Taylor Duryea, swung past T+T HQ, wearing his 2015 Tissot Premiership watch and carrying a couple of his other pieces. Having witnessed the win at last year’s granny from Tissot’s box, it was great to see one in the metal.   I also discovered a new local spot, (with some VERY wristshot-friendly lighting ) which has quickly become my go-to for mini-G2G’s. Hi everyone at Est on Cremorne Street! It wasn’t long before I had a couple of the Calibre 61 lads down for brunch, and got to check out @K1mnKK’s new Audemars Piguet Royal Oak (15400ST) – one of the hottest pieces going round. A few coffees in, and things began to escalate, with Kim leaving one watch lighter than he came, parting with a Submariner. Trades don’t only happen on the stock market you know. 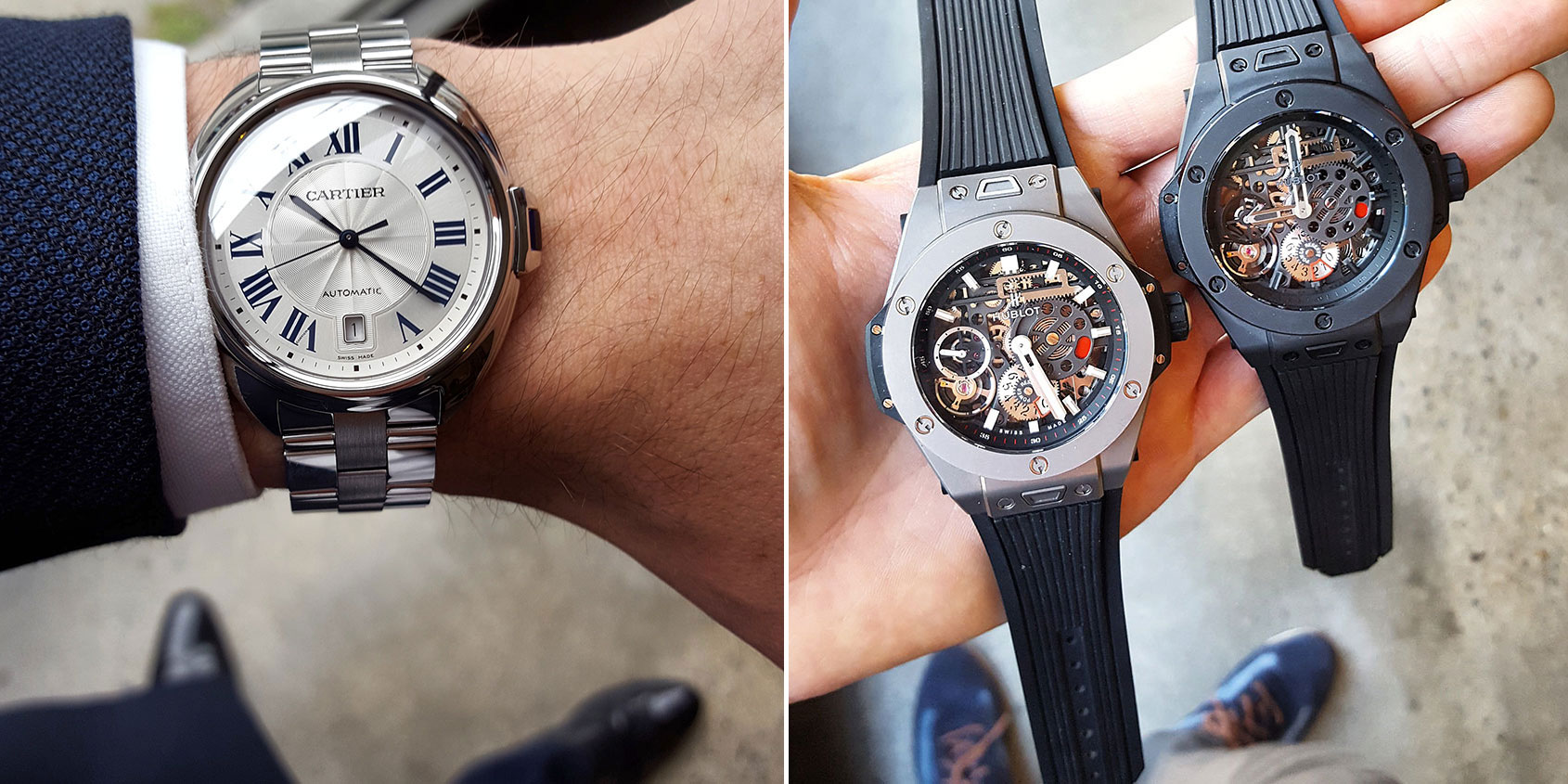 We had another few crazy days/weeks in the office, and on one particular afternoon, I enjoyed the company of a pair (one more and it would have been a ‘gang’) of Hublot Big Bang Meca-10s, as well as the new steel Cartier Cle De Cartier. We also kicked off the Time+Tide 2016 reader survey, which of course included a prize – this year, the choice between a 42mm Oris Divers Sixty-Five in Stainless Steel, or slightly patinated Carl Brashear bronze diver (we had to take it out of the plastic wrap to photograph it, obviously). 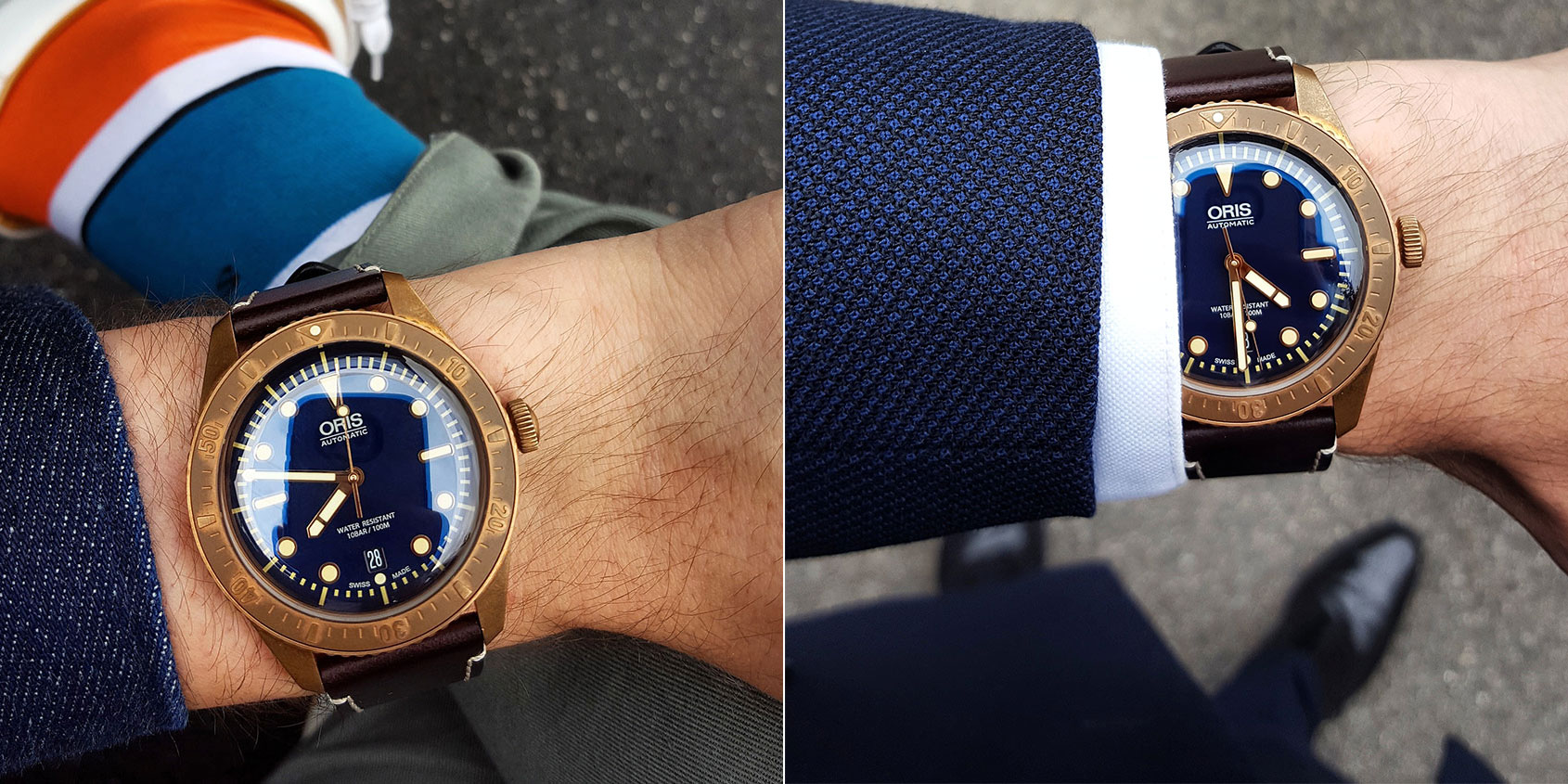 I wrist-tested the Oris Carl Brashear Divers Sixty-Five in Bronze. And I developed feelings.

I’ll be honest, I’d previously overlooked the bronze diver, thinking it would lack versatility, but after a few coffee runs and a formal dinner, I was soon proved wrong. It looks hot with just about anything, including a navy suit. 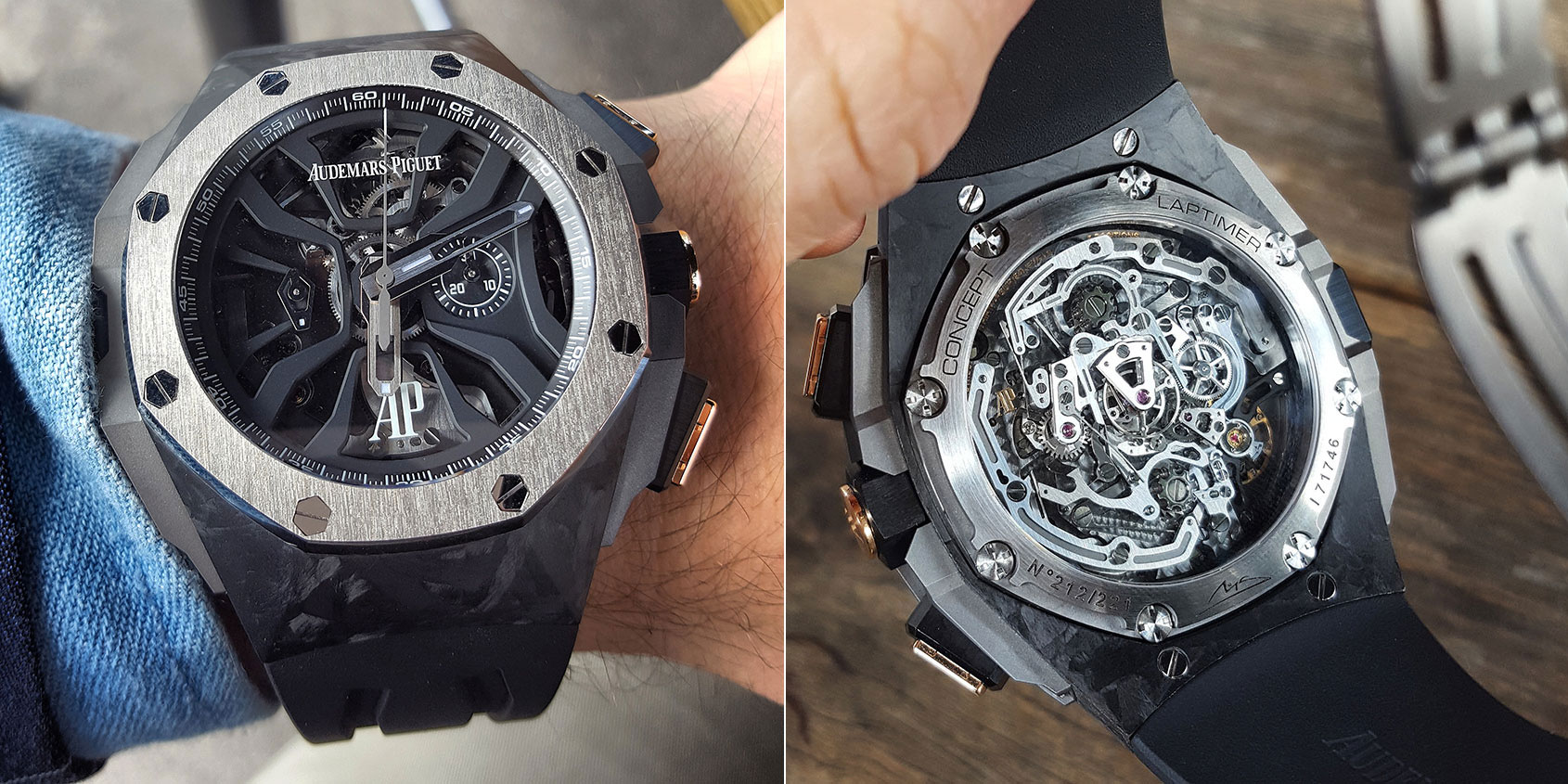 The Audemars Piguet Michael Schumacher Laptimer Concept Watch, limited to 221 pieces. You know the saying, if you have to ask the price….

Another highlight from the diary was the opportunity to check out a friend’s recently acquired Audemars Piguet Michael Schumacher Laptimer Concept Watch. Limited to 221 pieces, it might just be the only one in the country (this is not a drill people). Don’t even bother asking the price. As the month came to a close, Vue De Monde was calling my name. We were there for an Antons Jewellery x Piaget event, and I (finally) got a chance to have a hit with the new Polo S. It was an impressive evening, and from the sounds of things Piaget has a lot on the cards for the next 12 months. 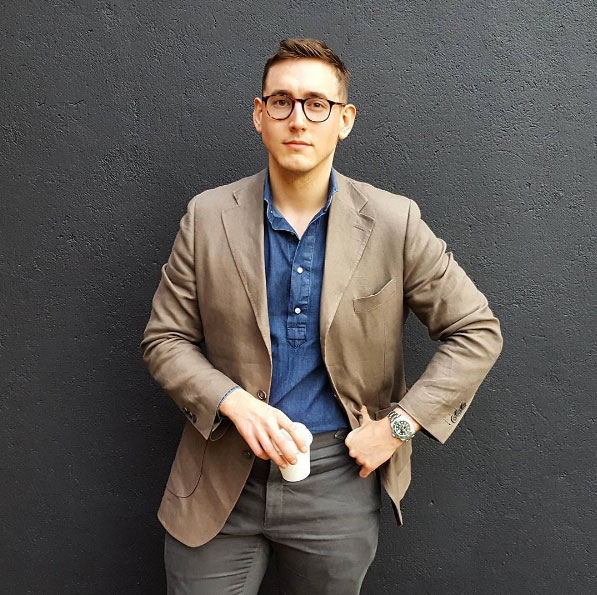 Meet your scribe, Andy ‘linen is the new tweed’ Green