Editor’s note: The Rolex Air-King ref. 116900 is the brand’s entry into their world of professional watches, but it’s also a piece that stands out in the line-up, thanks to its unusual dial layout and colourful logo. We take another look at this now three-year-old watch, below. 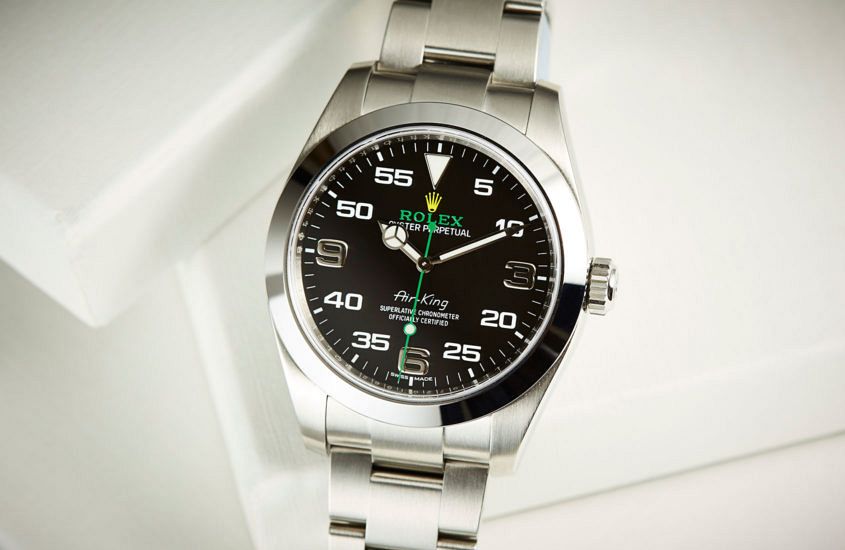 Rolex famously espouses a philosophy of evolution, not revolution – and its product releases are so reliably incremental that you could, well, set your watch by them. Except when they’re not. Every so often, Rolex does something that breaks from its evolutionary mantra. Witness the Sky-Dweller, the platinum Daytona and now, the latest generation of the Air-King. There’s so much new about this watch that the only real link to the Air-Kings of yore is the name, so it genuinely shocked people when it was unveiled at Baselworld, and has polarised opinion since. But now that the watch has started arriving with retailers and making its way onto wrists, even the most vocal of naysayers are beginning to mellow. But is that really so astonishing ? This is Rolex, remember? 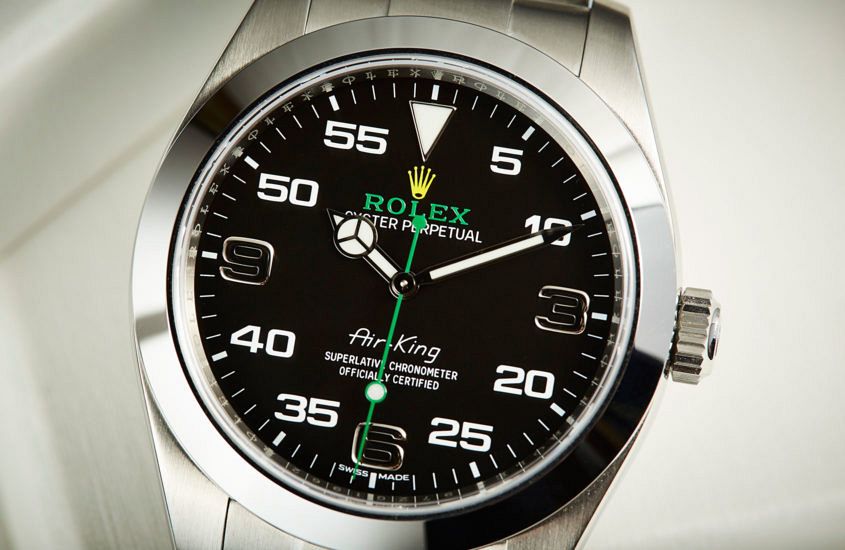 For a time-only Rolex, there’s a lot going on with this dial. To start, there’s the text, all five lines of it – two at the top and three at the bottom. Of special note here is the vintage ‘Air-King’ text and of course the Rolex logo and text, printed for the first time on a watch in two colours. Add to this the familiar applied 3,6,9 numerals and Mercedes handset à la the Explorer. But the most controversial part of this dial is the minute indicators. Rolex says these oversized Arabic numerals are inspired by the watch’s aviation roots, though I find the rebranding of the Air-King into a pilot’s watch tenuous; if any Rolex is associated with pilots, surely it’s the GMT-Master? (What is it with brands releasing non-convincing pilots these days? First Patek and now Rolex. Who’s next – Panerai?) Having said that, the Air-King’s dial does bring to mind an instrument panel, and that’s no accident. 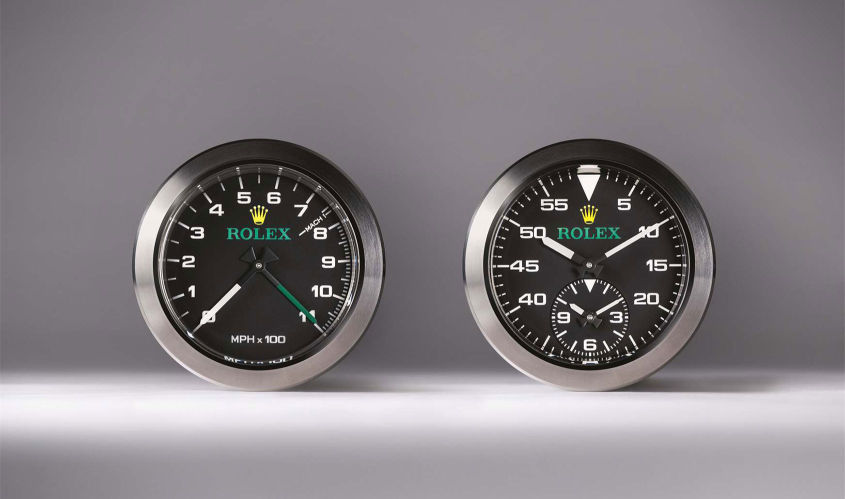 Rolex instruments for the Bloodhound SSC

Back in 2014, Rolex announced it was supporting the Bloodhound supersonic car’s attempt to hit 1000mph, showing us two analogue dashboard instruments that the new Air-King bears a striking resemblance to, right down to the green and gold logo. I have no issue with Rolex trying something new on the design front, but I do find it odd to shoehorn this new design language into such a storied model; there’s no reason the brand couldn’t have come up with a new name – the Speed-King perhaps? And yet for all that newness, all that uncertainty, the dial works. Perhaps it’s thanks to the unshakeable confidence the name Rolex carries, or perhaps  because those who work there are masters of the fine art of watch design. Whatever the reason, after a few glances, and a little time on the wrist – the odd, almost ungainly assurance of the latest Air-King starts to win you over.

The case and bracelet 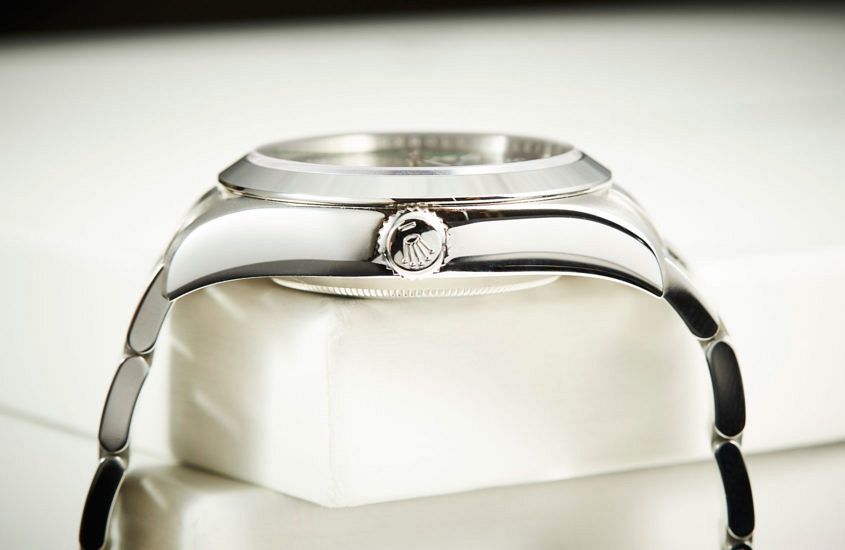 The other big change to the Air-King — and a far more accepted one — is the size of the case. The old version was a decidedly small 34mm; now it’s a more mighty 40mm across, making it the same size and proportions of that other quirky Rolex, the scientific Milgauss. Slipping it on, the thing you first notice about this case is the thickness – its beefiness gives the watch a real presence on the wrist, an instant and solid reminder that this is, in fact, part of Rolex’s professional line of watches. The Air-King comes on the impeccable Oyster bracelet with a folding Oysterclasp, and is everything you’d expect from a Rolex in terms of comfort.

The similarity to the Milgauss continues to the movement, both using the calibre 3131 – automatic with 48 hours of power reserve, and protected by a Faraday cage. The movement meets Rolex’s updated superlative chronometer, meaning it’s accurate to +2/12 seconds per day.  The real drawcard here, though, is the anti-magnetic properties of the movement, which is equipped with a paramagnetic blue Parachrom hairspring. This calibre might not be as flash as those with the new Chronergy escapement, but it’s still an excellent movement with some nice features. 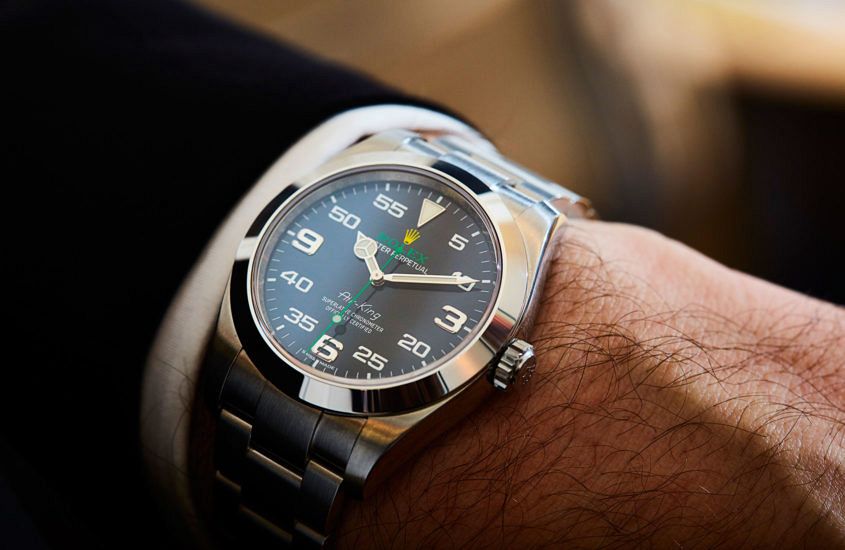 When I first saw the Air-King through the glass at Baselworld, I was taken aback — it was so unexpected, so un-Rolex in its looks — but as time passed I started to appreciate its unique blend of design elements. This is definitely a Rolex aimed at a younger audience, people left cold by the classicism of the Oyster and the ubiquity of the Submariner. It’s a fun watch, but also one that honours the brand’s rigorous legacy and traditions. Only time will tell if the 2016 Rolex Air-King will be remembered as a classic or a quirk, but given how much it’s grown on me in such a short time, I suspect the former.

Oh, you think Rolex is conservative, huh? Check this out.

Looking for your first Rolex, but something with a little more personality than the Explorer or Oyster Perpetual 39? Say hello to the Air-King.

The green and gold logo? The minute track? Both obvious calls, but I suspect removing either element might actually ruin the particular charm of the Air-King. So, I vote for leaving this newest Rolex exactly as is.