Editor’s note: With so many different opulent steel sports watches occupying the marketplace, it’s sometimes easy to forget that one member of the holy trinity of Swiss watchmaking, Vacheron Constantin, has been making their interpretation of a luxury sports watch for more than 20 years now — the Vacheron Constantin Overseas. It’s an impressive collection, and it’s one of the few luxury sports watches that came into the game relatively late compared to the stalwarts of the genre like AP, Patek or even Girard-Perregaux. And yet despite this, it was still fresh and inspired; nothing looked overly derivative or pastiche, it was just a great-looking sports watch. Anyway, a little while ago, our fearless leader, Andrew McUtchen, was lucky enough to spend an entire weekend with Vacheron’s sportiest collection of timepieces, and these were his thoughts. 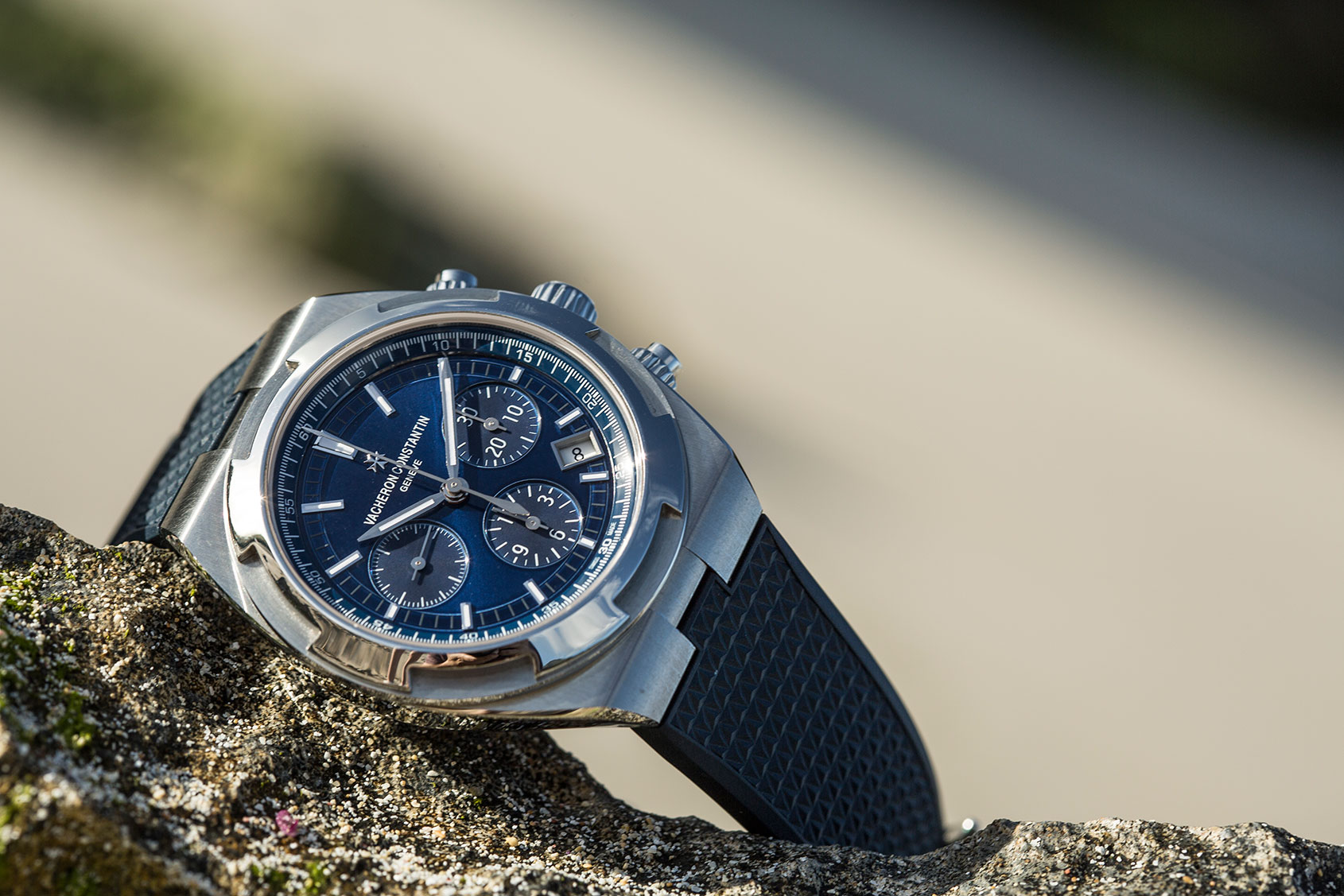 I remember the first Vacheron Constantin I ever laid eyes on. It was in a magazine for an Australian retailer. It was an Overseas model and it was a chronograph, but thanks to an interesting take on the bezel, it didn’t strike me as ‘just sporty’ like chronos can be. It had an edge to it. Literally. The Maltese cross tips cut out of the polished bezel made it dressy and daring. The backstory told in a full-page ad opposite the watch – of a brand founded on an island in the middle of Lake Geneva that’s been in continuous production since 1755 – only added another layer of intrigue. It was almost Da Vinci Code-like in its imagery and storytelling. I was fascinated. 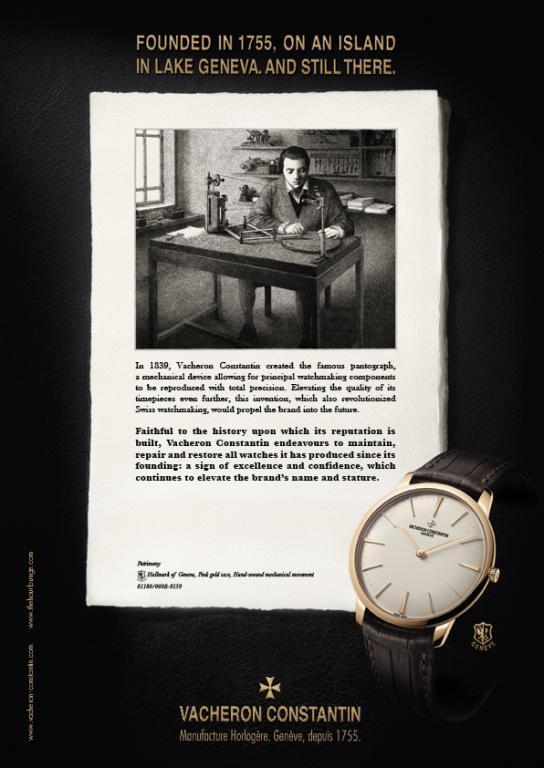 The ad that started my intrigue with Vacheron Constantin, Image from The Hour Lounge

Fast forward to 2016 and several of the elements that first introduced me to the brand are in play. I’m on an island. Lord Howe Island. I’m in possession of the brand new Overseas range in its entirety, including all the interchangeable strap options. All that’s missing is a conspiracy theory, and Audrey Tautou, which is a shame. Over the 48 hours we spent on the island my wrist was exclusively dressed by Vacheron Constantin. I had all those in-between moments that reveal a watch to be truly charming, or a charlatan. These were my thoughts on the Overseas Collection.

My first impression was … Flashbacks! To the above memory. I was glad the collection hadn’t strayed too far from the striking hallmarks of simplicity with nuance, sporty with sophistication. And I was delighted the bezel is largely unchanged. 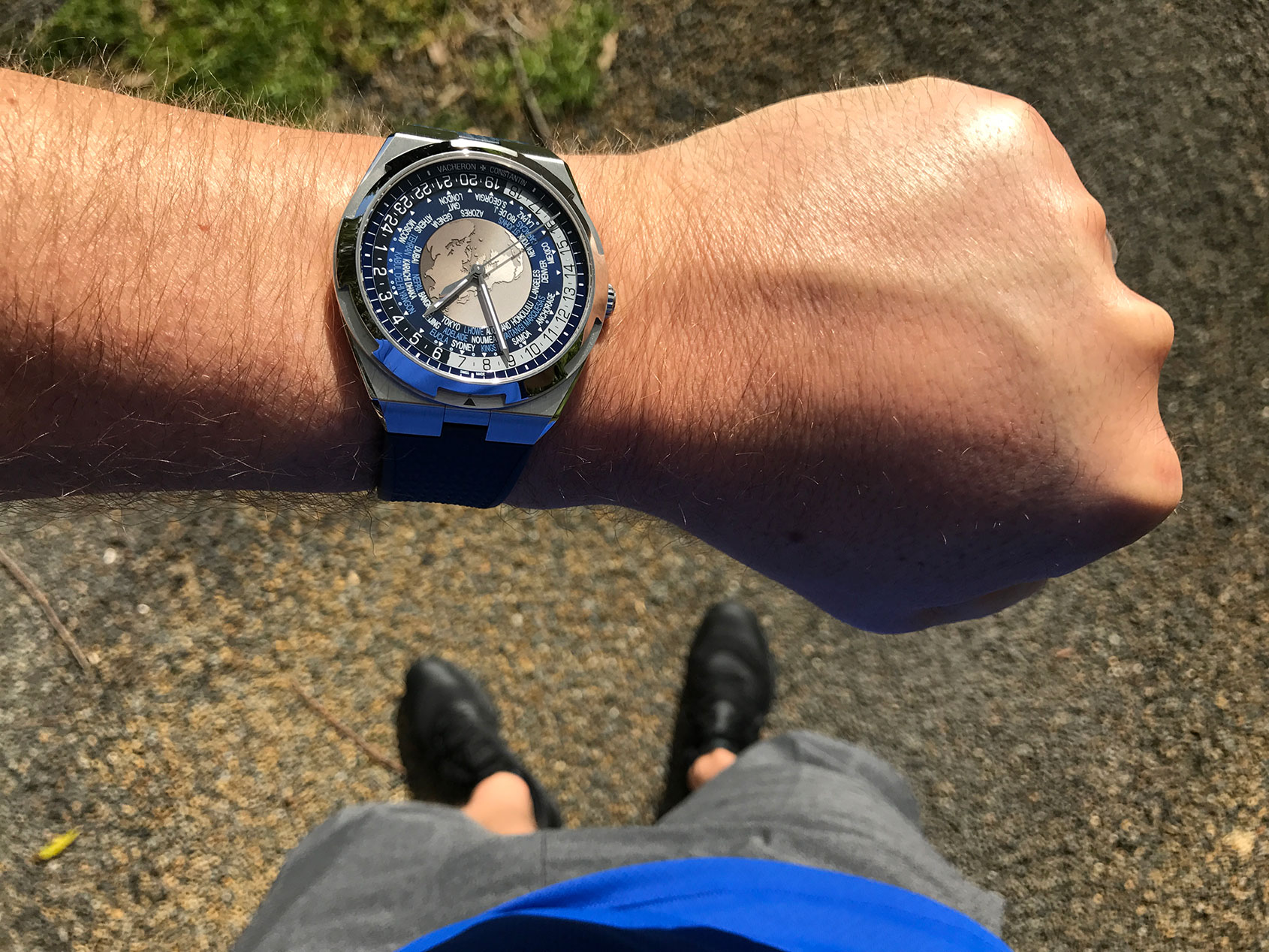 Once I put it on I felt … the quality. That indescribable luxurious on-skin feel that usually comes with Vacheron-level watches. The first model I tried was the Chronograph and the strap was the very supple rubber version – less shaped and contoured than the Rolex Oysterflex (there is no rib inside to keep its shape), but no less comfy. The context was a sun-drenched beach, the mission was not to just look fly, but to give it a genuine out-of-office workout. I know this is not what Hallmark of Geneva steel ‘sports’ watches are primarily used for, but, you know, the strap says exercise, so why not? The fact is it performed beautifully under pressure (no sand scratches), and it was – as I say in the video – unerringly close in shade of blue to the ocean. Same goes for the three-handed automatic we had, which was the same blue. Beautiful.

Looks-wise … It’s masculine and classic across the range, but the feels do change from model to model. The World Time: at first it struck me as busy, but then my eye was drawn to the debossed Northern Hemisphere globe in the centre and the tinted sapphire disc that rotates above it. I am so into this disc. The Chronograph (blue): Dial, dial, dial, dial, it’s incredible. The regular three-hand Overseas. Despite being initially let down by the blank real estate in comparison, it ended up making me swoon the hardest. The ‘active negative space’ of the dial ends up pushing your eye to the applied logo, the bezel, the seconds track with its different blue lacquer finish. 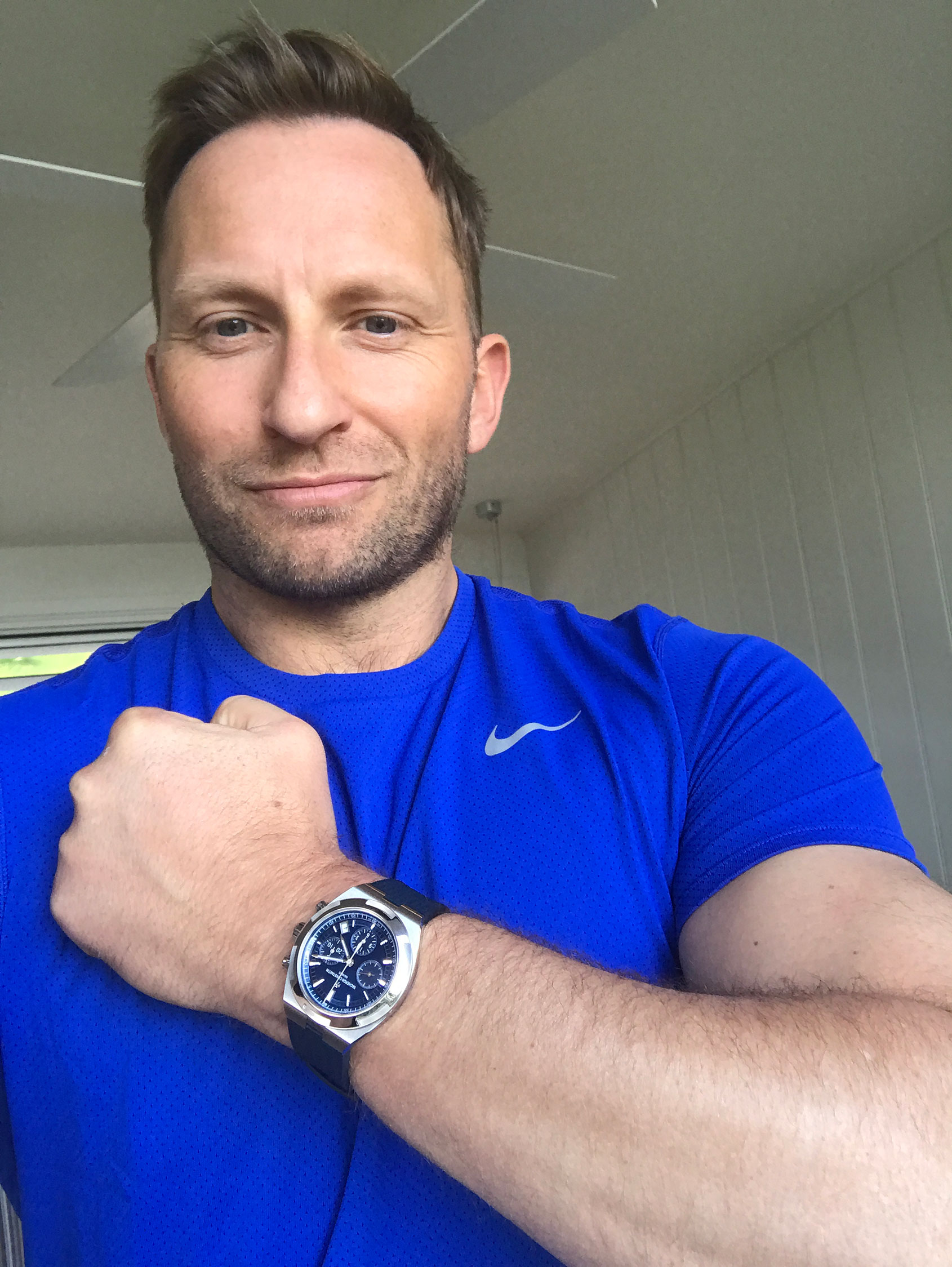 What stood out to me was … the different finishes of the bezel (polished) and the case (brushed), the integrated bracelet/strap, the little touches of things like the applied Maltese cross logo. Over time, the less visible elements, such as the Hallmark of Geneva logo on the base plate, the granulation on the 22k gold rotor and the compass points of the rotor’s design, all had their moment. It’s a watch that saves a lot of its surprise and delight for the second, third and three-hundredth glimpse.

I’d wear this with … The World Time is actually fun to adventure in, if you’re comfortable climbing mountains in a piece of this value. The chrono is another definite contender for a ‘one-watch’, but is less feasible for a tux given the sporting tones. For my money, the time-only version is the most versatile, and switched seamlessly from smart casual for a session feeding fishes in the shallows of Ned’s Beach to black tie that evening. Love navy and black as a colour combination! 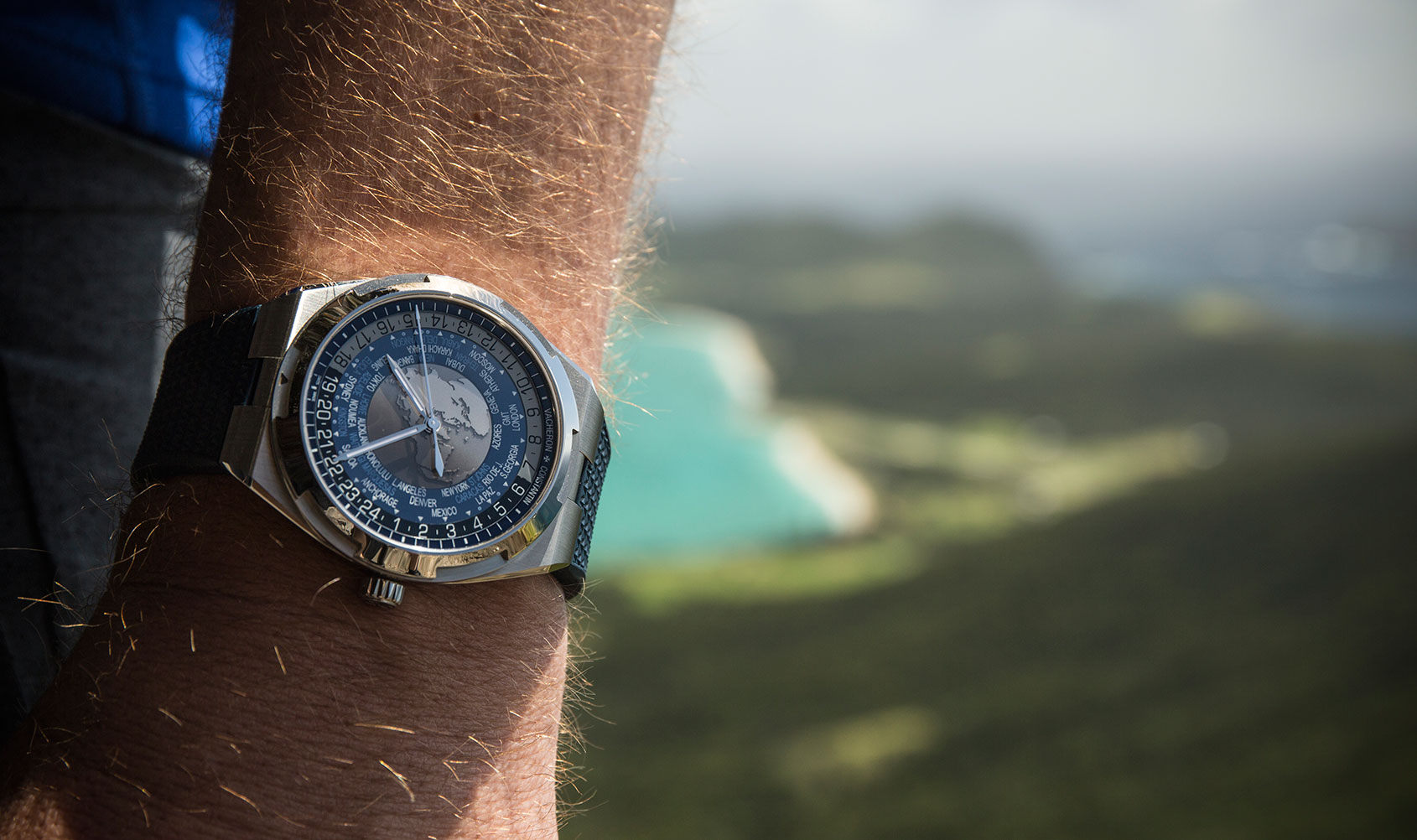 If I could change anything … I’d change the straps. That’s a cheat answer, but seriously, it’s true; being able to change the straps removes a major stumbling block and lets you run wild with your preferred option. These are watches designed with three personalities that all fit. I am actually someone who would use all three straps on regular rotation: croc for formal, bracelet for office days and functions, and rubber for weekends. It’s a brilliant idea by VC and adds several thousand dollars of value in my opinion. The strap change mechanism is the best I’ve tried yet, too. Firm when on, but not sticky to release.

By the end of the week … I was wrestling to pick a favourite out of the three. I landed on the three-hander for the simple reason that it can do more as a ‘one-watch’. However, if you have a deeper collection than mine, and can pursue specific watches for purpose – such as a steel sports watch to share the limelight with an AP Royal Oak, or an elegant World Time to relieve your Patek ref 2523 from active duty – you are going to find two very compelling propositions in the World Time and Chronograph, not least because you can adapt them to their tasks with three strap options.