If you were to travel back in time and ask a circa 2010 horological enthusiast what some of the big players in the mainstream watchmaking game were, there’s a fair chance that Raymond Weil would get a mention. However, a lot has happened in the subsequent decade that’s followed – it could even be argued that the last 10 years have been the industry’s most transformative, full stop. Loads more eyeballs, lots of new watchmakers and a whole heap more punters. Because of these factors, Raymond Weil just hasn’t got the same recognition it once did. No question about it, you don’t see nearly as many on people’s wrists these days. That’s what happens in an increasingly competitive market. 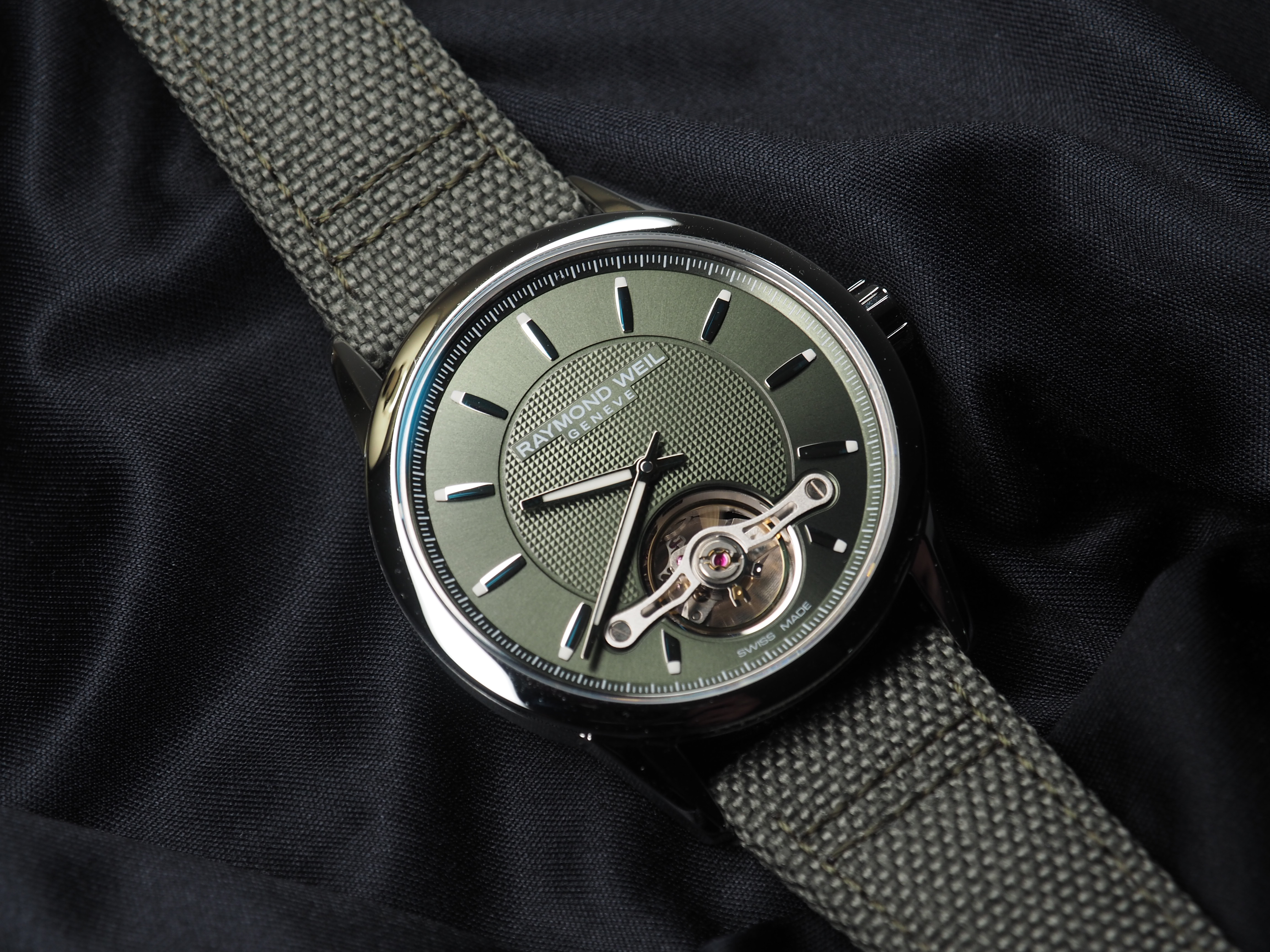 But the brilliant thing about competition is that it has the ability to breed success. As the Roman poet Ovid once said, “A horse never runs so fast as when he has other horses to catch up and outpace.” And in 2020, Raymond Weil is starting to gallop. Their latest effort, the Freelancer Calibre RW1212 in a striking shade of green, proves it, and here’s why. 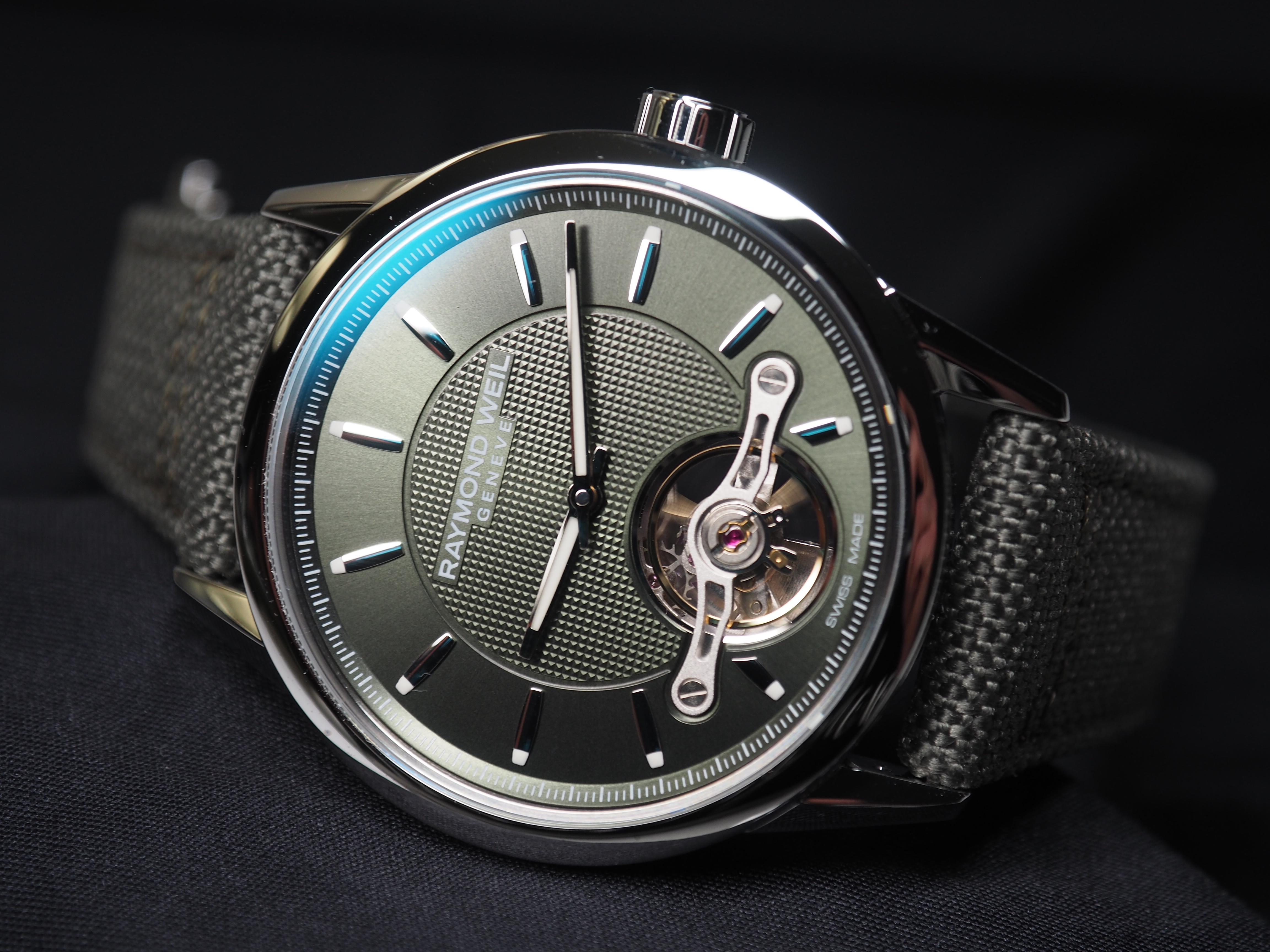 Raymond Weil may well be trying to recapture the fanfare of the watch enthusiast community with this new Freelancer, but they haven’t set about reinventing the proverbial wheel. No, despite measuring in at a modern 42mm across (and 10.6mm thick), the stainless steel case is purposefully round and quite traditional looking. Every upwardly facing element of the case — whether it be the slim, smooth bezel, long contoured lugs or multifaceted crown — are all highly polished. Conversely, the flanks of the case (excluding the bezel) are horizontally brushed. This dichotomy of finishing, while not groundbreaking, has the desired effect – it is a good-looking case. Whether in direct sunlight or a dark and brooding room, the Freelancer gleams with purpose, and it’s satisfying to behold. 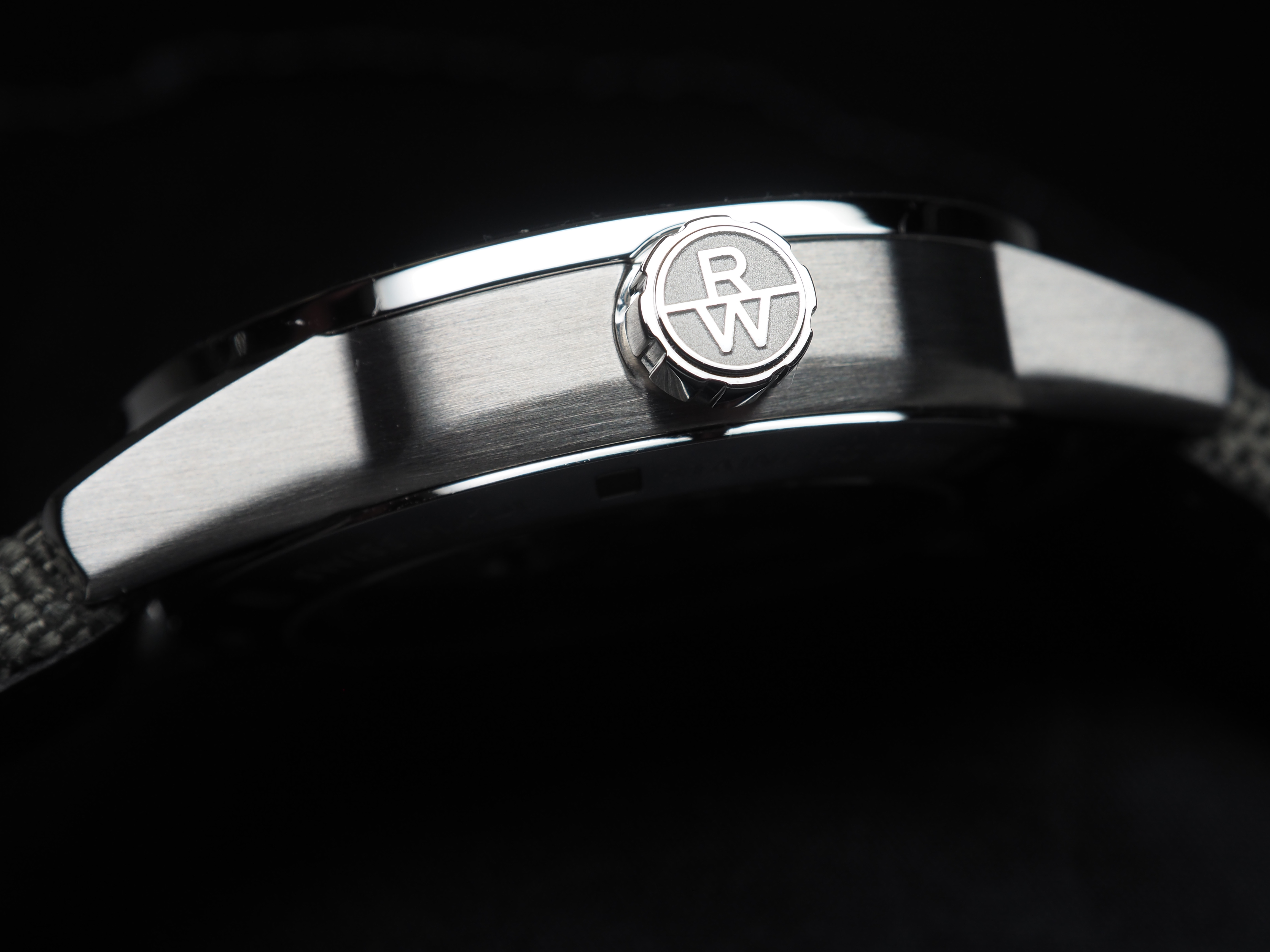 The aforementioned crown is a screw-down job, which goes a long way to helping the Freelancer achieve its 100 metres of water resistance, and while we’re certain that 99.9 per cent of owners won’t be doing any skin diving with this watch on the wrist, it’s a reassuring feature nonetheless. The spherical case is capped with a flat-piece sapphire crystal that sits almost flush with the steel bezel, and the caseback has also been fitted with sapphire crystal, which gives RW a chance to show off one of this watch’s strongest talking points. 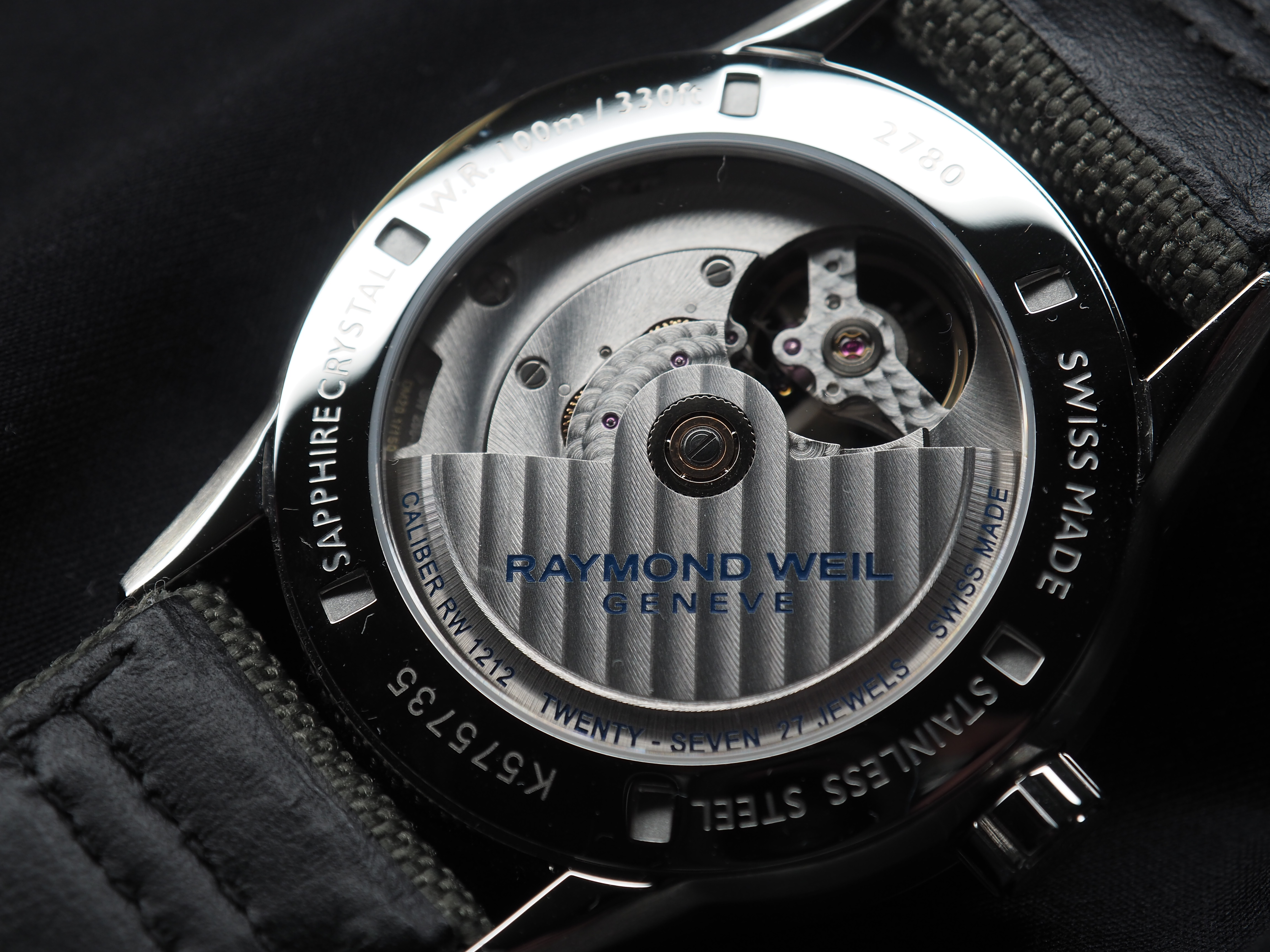 Calibre RW1212 is an in-house designed movement that Raymond Weil has commissioned third-party Swiss giant Sellita to manufacture, so it’s not 100 per cent in-house as per its normal definition but, nevertheless, a respectable piece of horology. It’s nicely finished, with the oscillating weight decorated with Geneva striping and other elements featuring some handsome perlage. Calibre RW1212 offers self-winding, 27 jewels and 38 hours of power reserve. However, the biggest party trick of this movement is its exposed balance wheel, hairspring and pallet lever, which can be seen thanks to an aperture located at six o’clock on the Freelancer’s attractive dial. 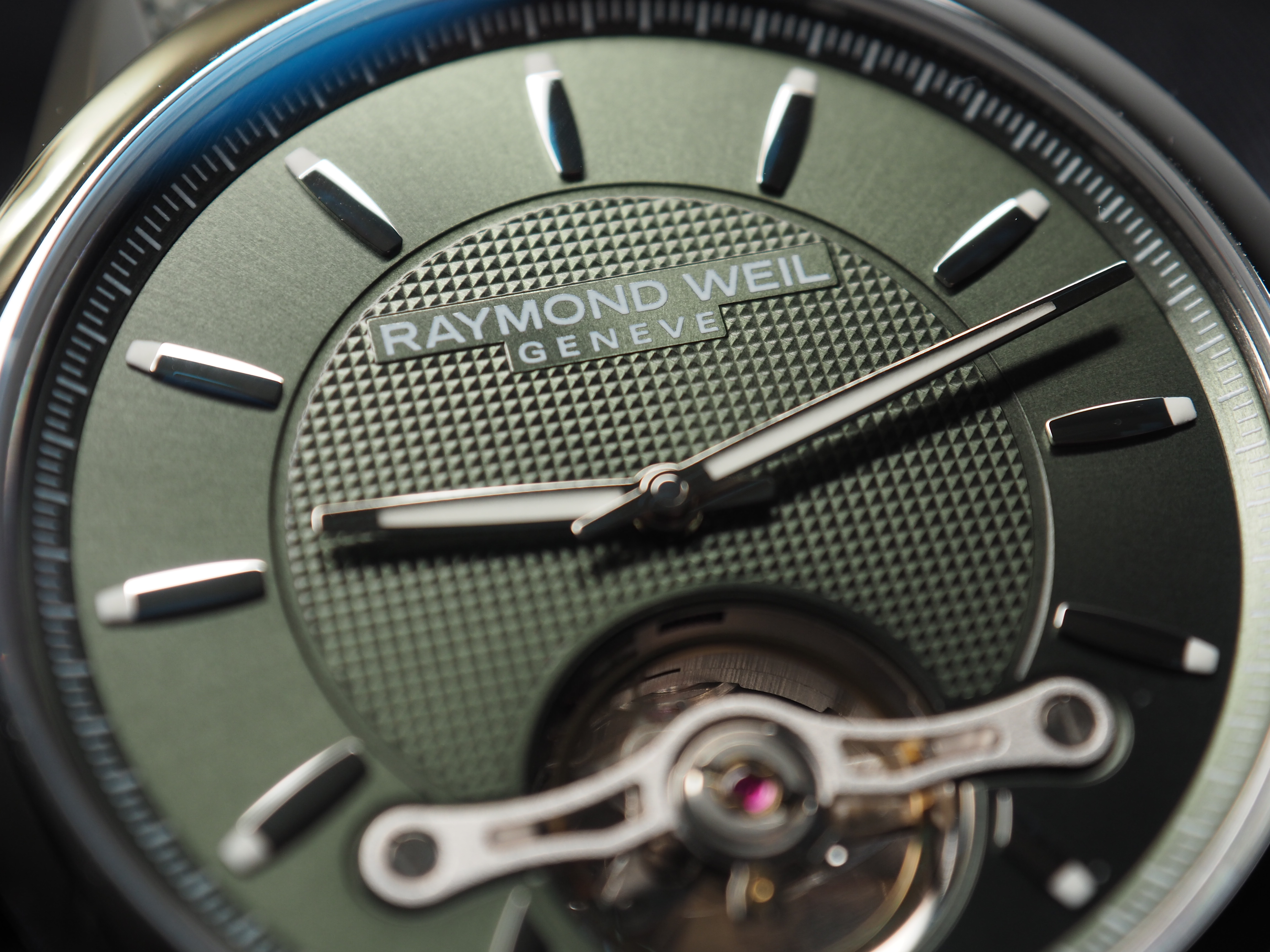 This is easily Raymond Weil’s best dial in recent memory. The particular shade of metallic green they’ve used is quite gorgeous and complex, like a cross between forest and olive green. An inwardly concaved minute track lined with slim white accents is the perfect entrée for what the rest of the dial has to offer. Highly polished applied indices sit atop a radially brushed, matt satin-finished chapter ring, which is then separated by a Clous de Paris guilloche centrepiece that really makes the dial pop. The elongated, slim, polished, barrel-style handset matches the indices seamlessly, and are filled with a soupçon of green Super-LumiNova, which is a handy touch. Some may argue that exposing elements of the movement at six o’clock is a tad contrived but, to be honest, the diminutive aperture and exposed stainless steel bridge add a welcome element of visual complexity and three-dimensionality to what is already a very good-looking dial. 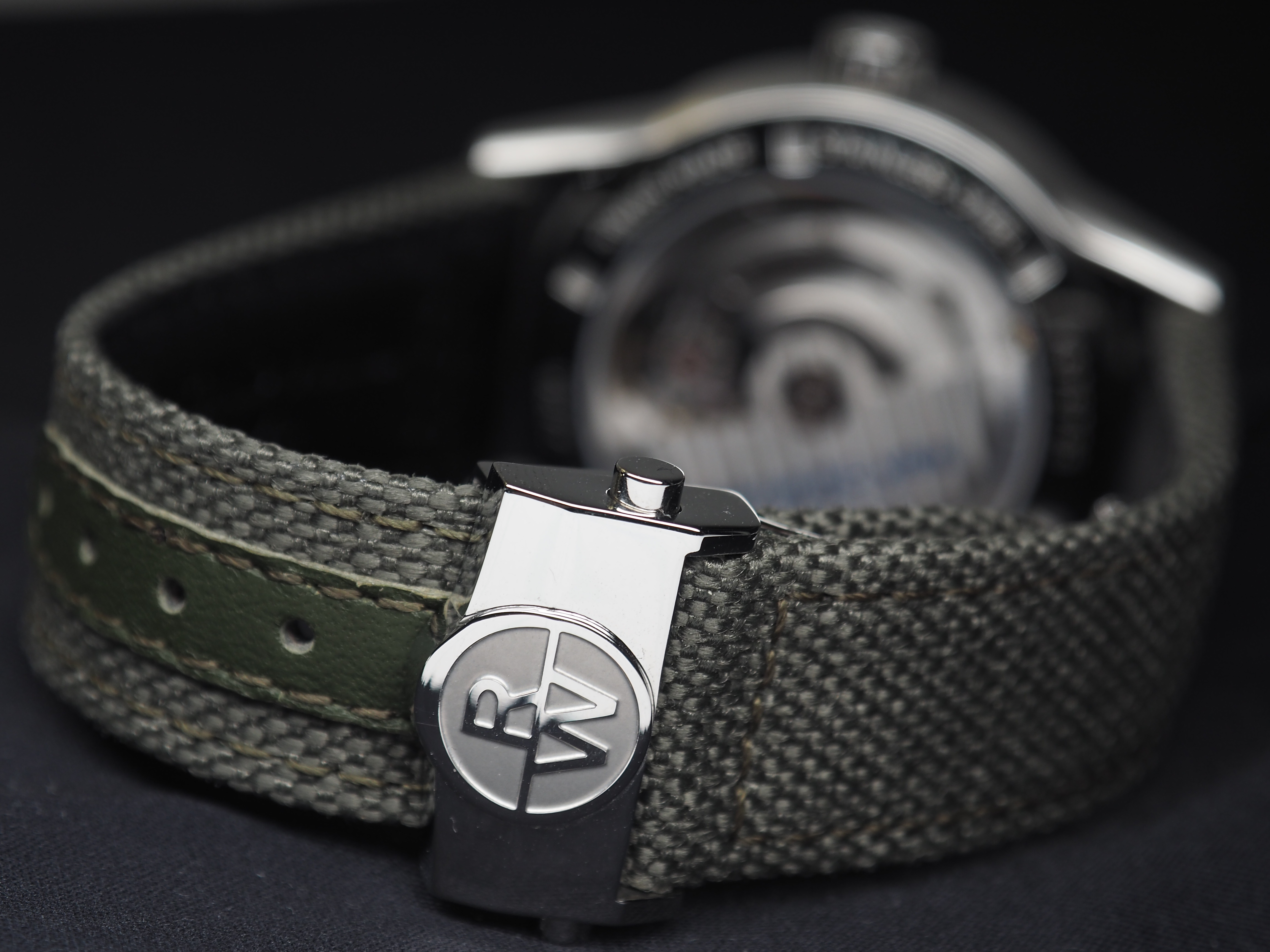 Attached to the conventional case is something very unconventional indeed. Rather than a leather band or steel bracelet, RW has bestowed this Freelancer with a grey-green, textured textile strap, and it serves to accentuate the predominant theme of the watch. The textile strap is accompanied by a polished stainless steel deployant clasp with the RW logo engraved on its surface, and it, too, is a welcome addition, as it elevates the feeling of quality far more than a mere pin buckle would have. 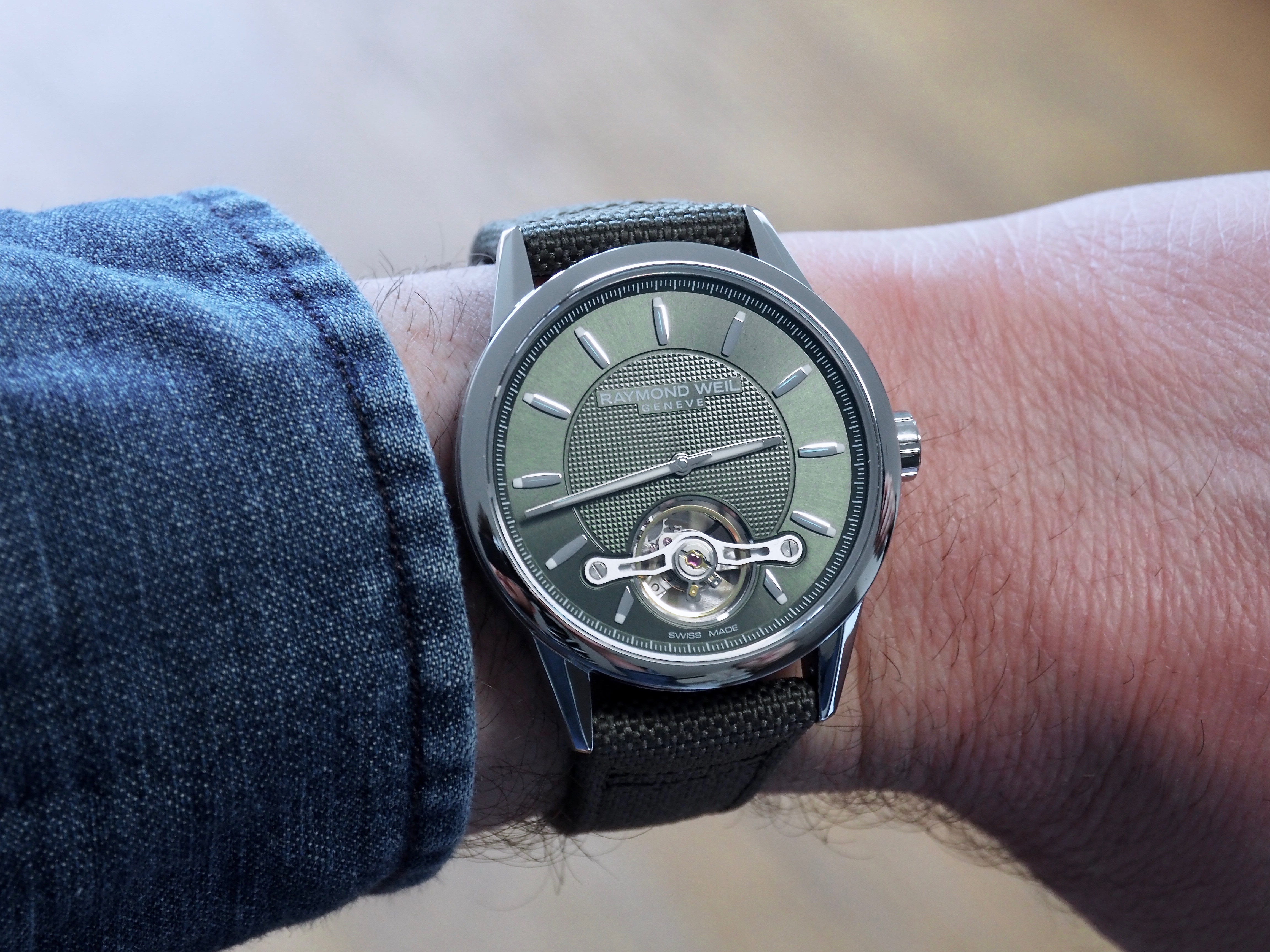 Although there was a small amount of trepidation at the forefront of my mind due to that 42mm sizing, the Freelancer is a satisfying experience on the wrist. That’s mainly down to the relative slimness of the case. It doesn’t feel weighty or overly cumbersome – in fact, the best compliment I can give it is that, after 30 minutes or so on the wrist, you forget it’s there. Or at least you do until you catch a glimpse of that gorgeous shade of green on the dial, and then you’re drawn in all over again. 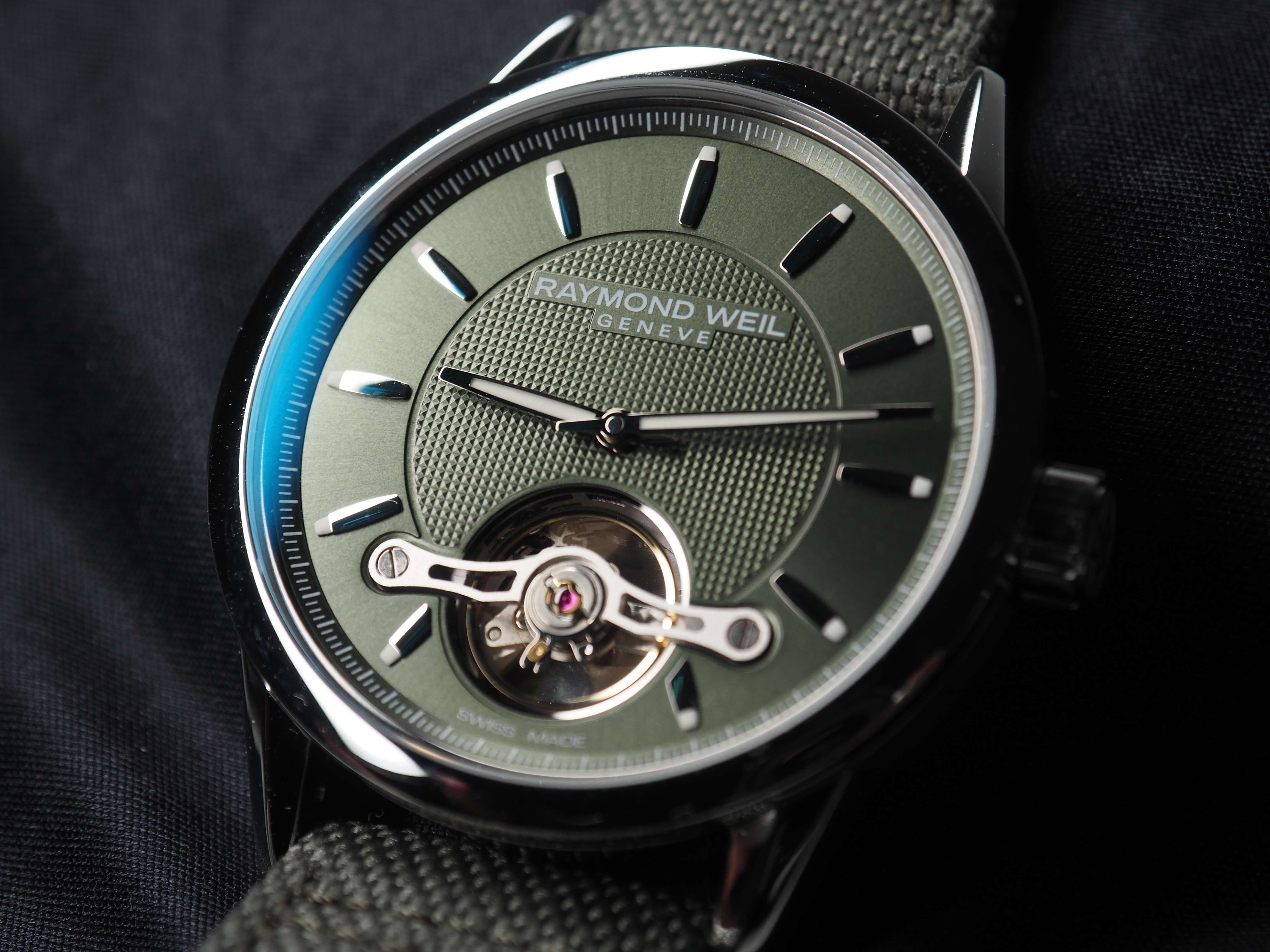 It’s not a watch for every occasion, and you definitely shouldn’t wear it with a suit. But for the sartorial gent who mostly dresses on the smarter side of casual, the new Raymond Weil Freelancer Calibre RW1212 is a solid option. And it’s a model that, in our eyes at least, has rejuvenated the watchmaker … we can only hope this is the first of many more good watches to come from RW.

The Raymond Weil Freelancer Calibre RW1212 in Green is $3150 and is available from the Time+Tide store right now.