Editor’s note: In 2019 heritage reissues are NBD. But back in 2015 the rules of the game hadn’t yet been nailed down. One of the standouts back then (and indeed now) was Oris, with their Divers Sixty-Five — it was a near perfect take. And one worth taking a second look at …

The Oris Divers Sixty-Five really could be a case study as to what a truly excellent vintage reissue should look like – all the elements are there, including classic good looks, fidelity to an historic model, contemporary convenience and credit card-friendly price. 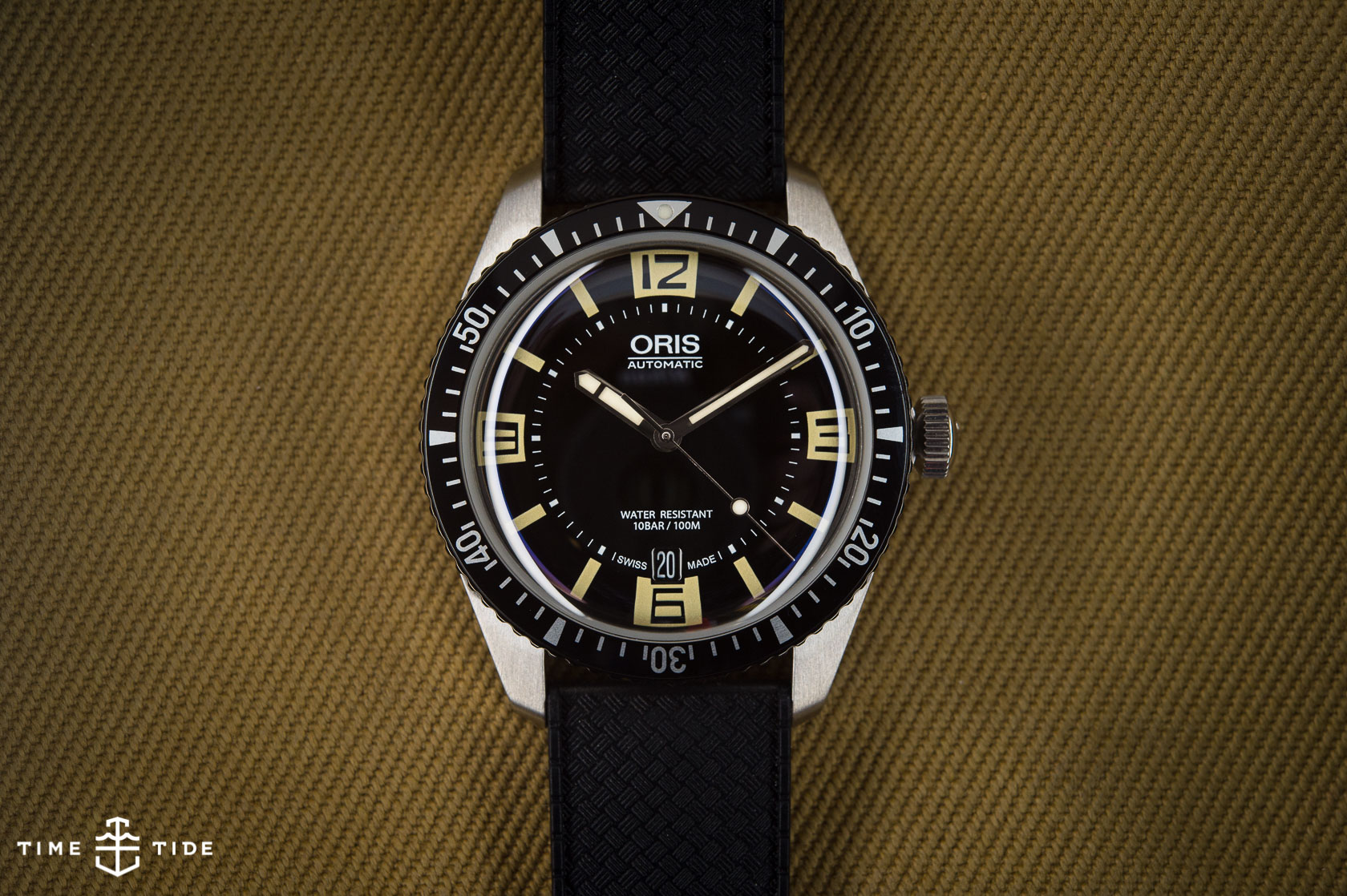 It’s an example of how the Swiss watch industry can, on occasion, be bailed up by David, the little guy. An obscure mid-’60s diver was not meant to be any kind of talking point at the 98-year-old Baselworld fair. But it was. And the small-sized 40mm watch had a big impact. It was one of the surprise hits, and one of the best vintage reissues of the fair.

But if you think about it, we shouldn’t have been too surprised that this watch came from Oris. The independent brand certainly has the capacity to produce quality watches, and this one certainly meets the brand’s “real watches for real people” strapline. Plus, with a history dating back to 1904, they certainly have the archive to rifle through for inspiration. 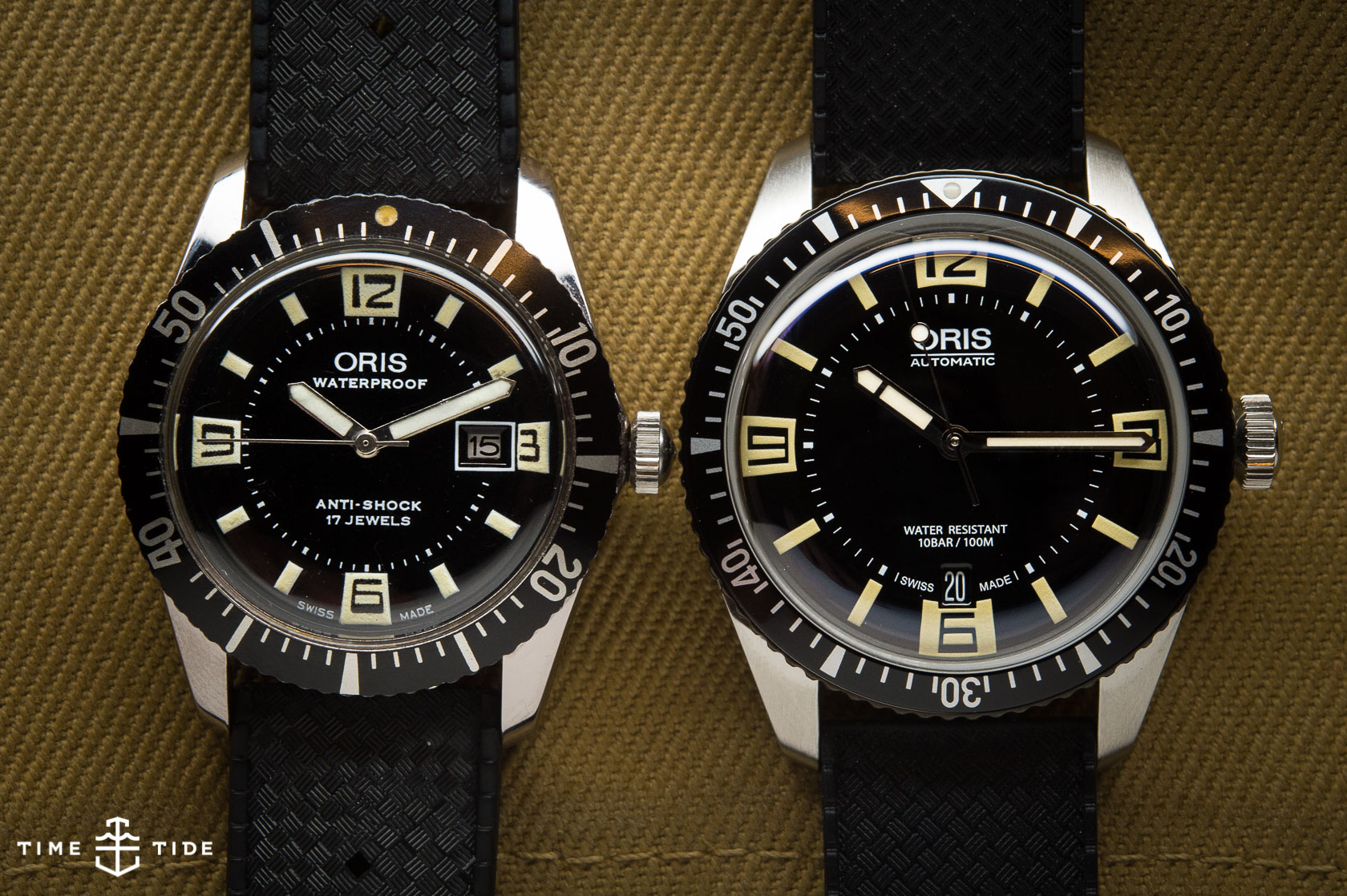 What’s clear when you look at the Sixty-Five is that this is a straight reissue, rather than a heritage-inspired mash-up of several designs. What comes into even crisper focus when you look at it beside the 1965 watch that it takes its name from is just how faithful a reissue it is. The only thing changed about the case is the slight (and reasonable) size increase to 40mm. The bezel has a few minor differences – they’ve added a triangle to the luminous pip at 12 for example. But it’s nice that they kept the aluminium insert and black finish of the original. The strap is a ‘tropic’ style rubber number with a regular tang buckle, which is very comfortable to wear. 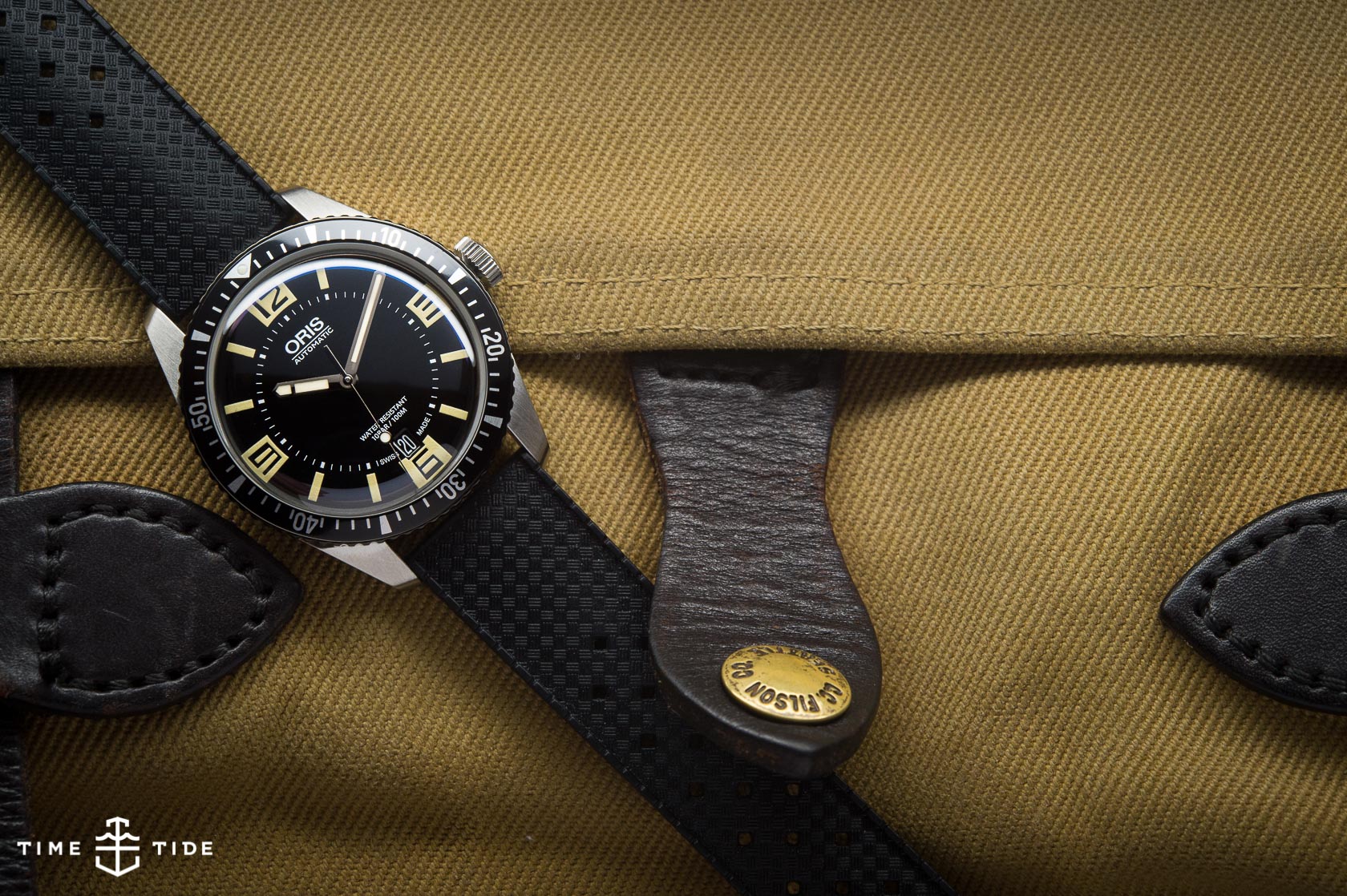 Most remarkable is the dial, which is actually an improvement on the original, with a more discreet date with a black date wheel, which doesn’t eat into the ‘three’ numeral. And something needs to be said about these numerals: it’s a brave choice by Oris to faithfully recreate such a distinctly ’60s typeface – and it is undoubtedly the right move; it gives what is otherwise a fairly straightforward piece some unique personality. 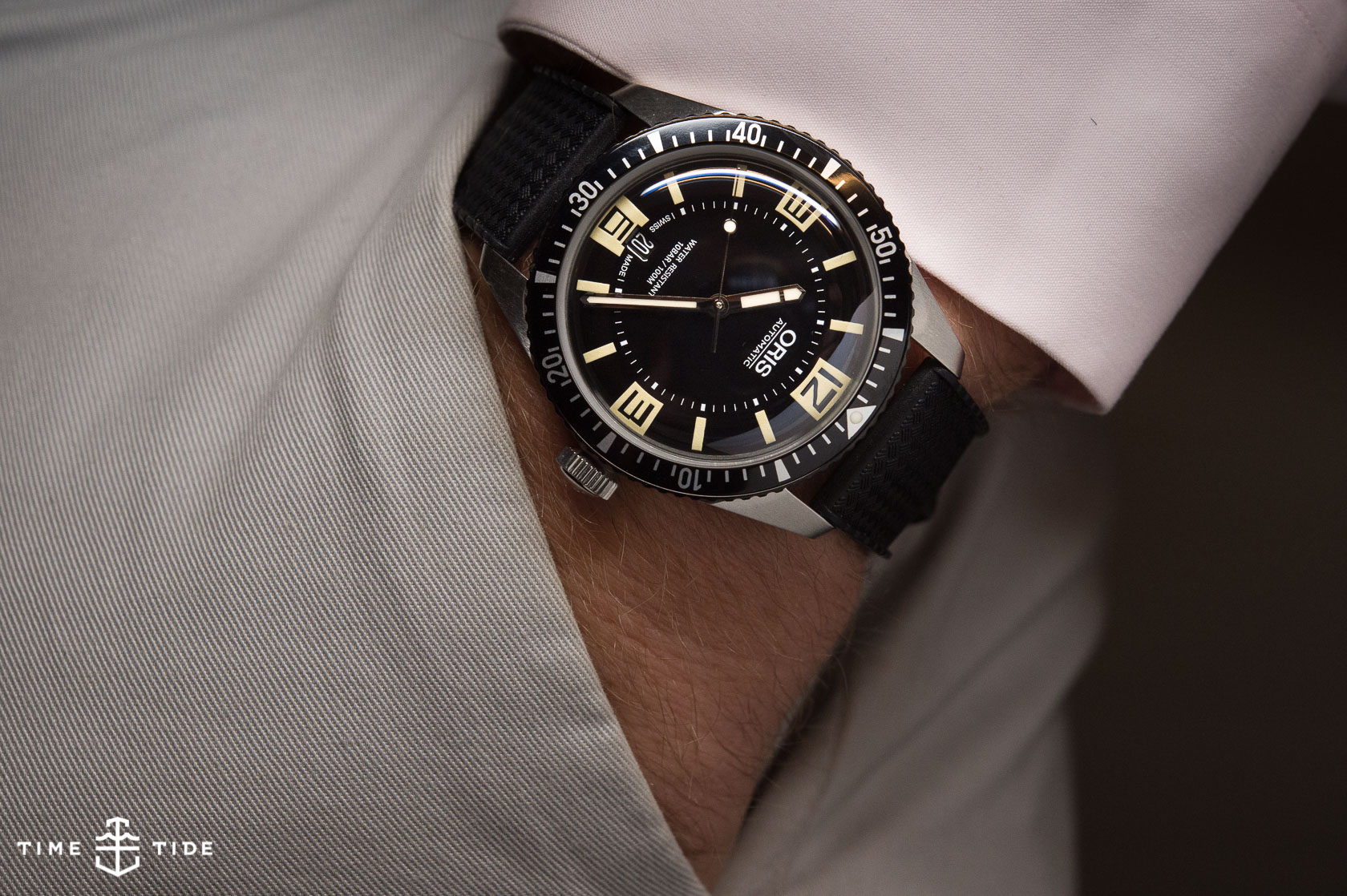 The watch is powered by the SW200 – a Sellita version of the dependable ETA 2824, an unremarkable yet sensible choice. The watch is water resistant to 100 metres, which was the norm in the ’60s dive watch, and makes it more suitable for desk-diving these days. 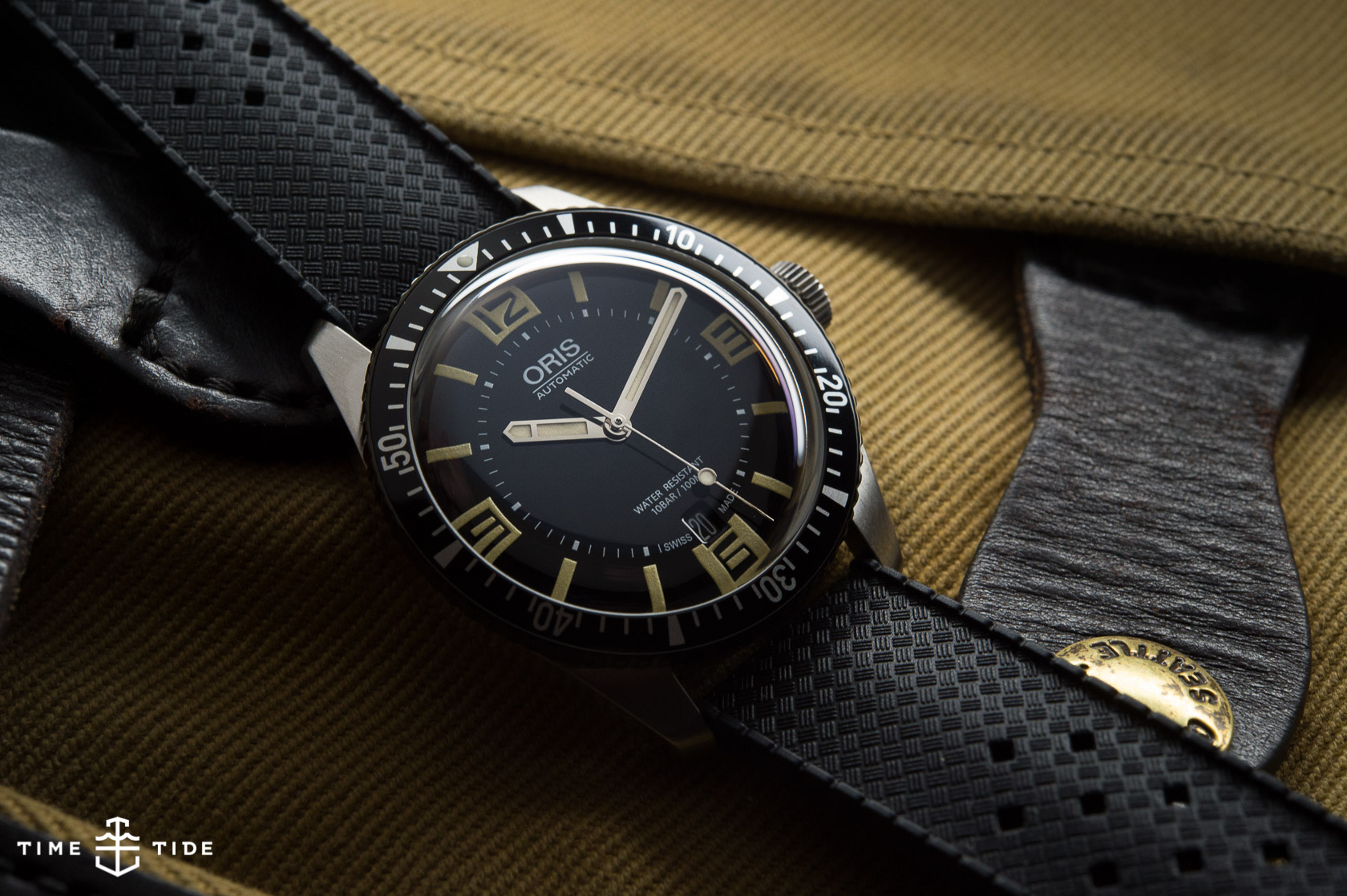 All this adds up to a watch that is a remarkably faithful reproduction – with a few tweaks (notably the size) that bring the watch in line with modern tastes. The other great thing about the Sixty-Five is the price. It has an Australian retail of $2300, which represents excellent value and makes it very competitively priced against watches from the likes of Tudor and Longines. 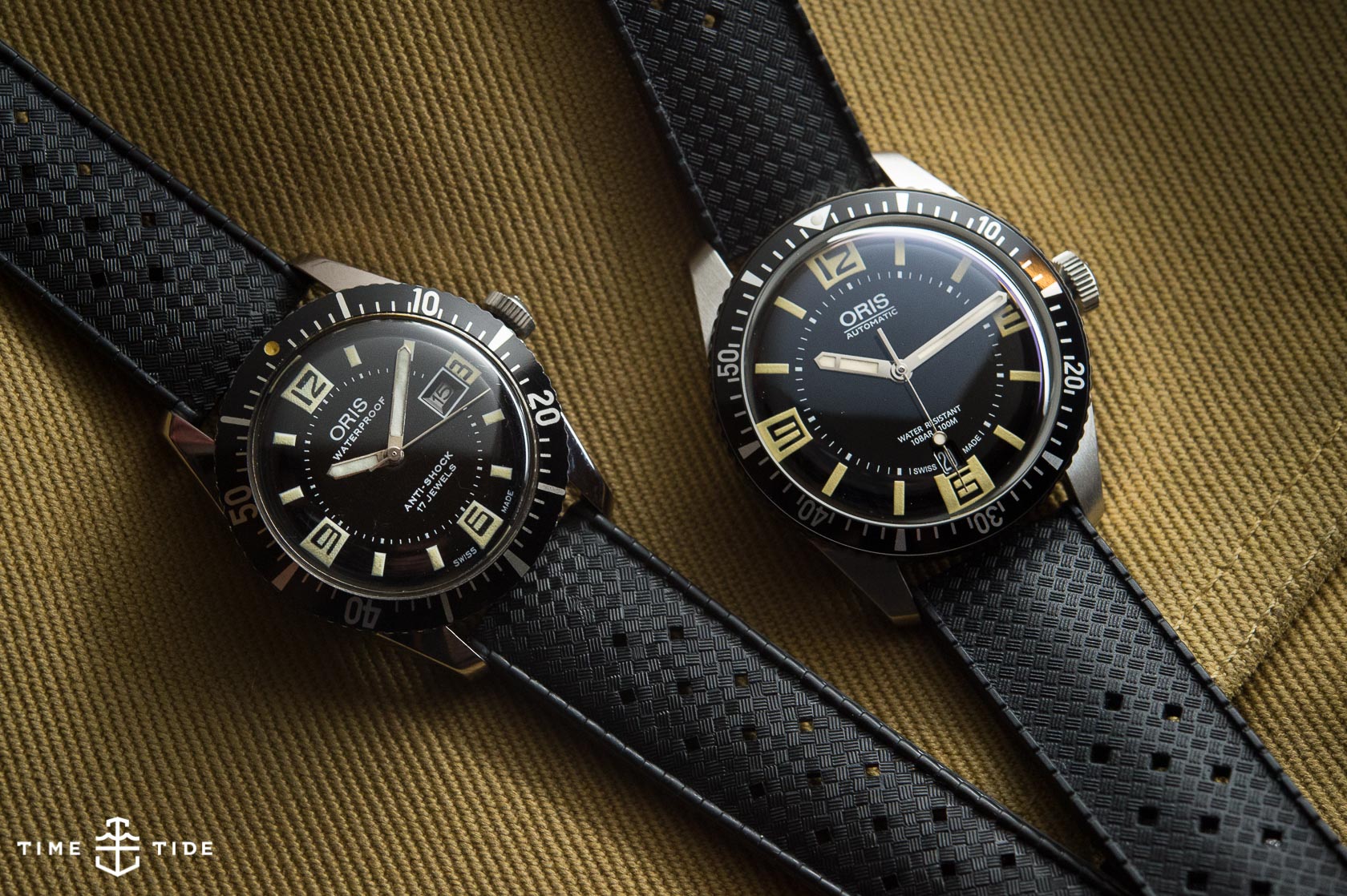 This price-point also explains why there are a few things missing – no bracelet, limited water resistance for a diver and no ceramic bezel for example. In adding these details, Oris would either have compromised the aesthetics or the price, thereby upsetting the delicate balance that makes the Sixty-Five such a great watch.