Editor’s note: It’s no secret that there are heaps of Speedy variants to choose from, and typically we veer towards the more classical versions. Which is why we were so surprised by this Omega Speedmaster Moonphase Chronograph. It’s two-tone, with a silver dial and a green bezel. Not what we’d normally pick. But also, absolutely awesome. 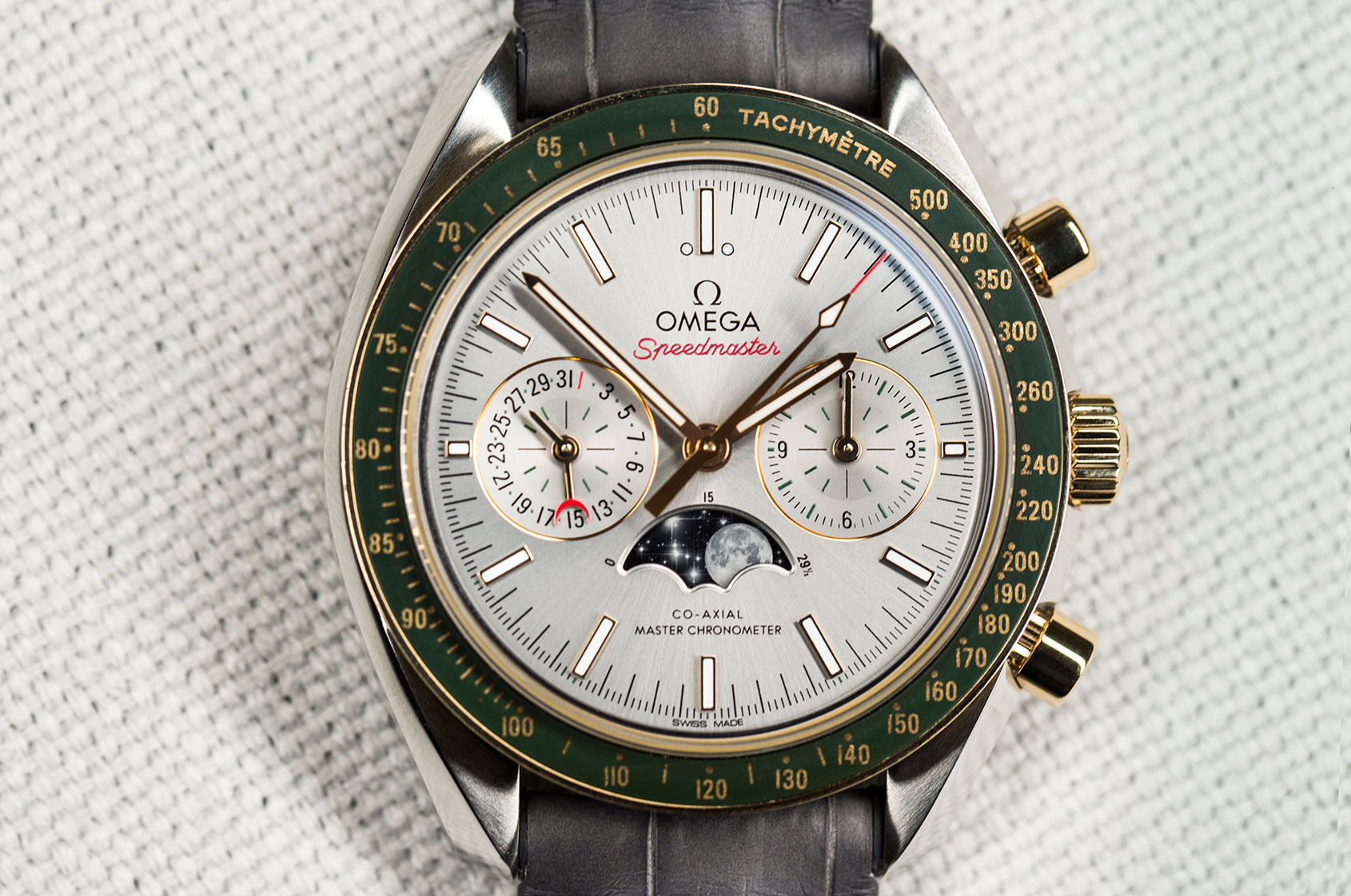 If, at the start of 2016, you’d told me my favourite Omega of the year would be a two-tone Speedmaster (yellow gold, no less!) with a green bezel, I’d have enjoyed a good laugh at your expense. I like a Speedy as much as the next guy, but I like them in the straight-up classical format, à la NASA. Well, fast forward a few months and you’ll have to excuse me as I wipe egg off my face, because here it is, my pick of the Omega 2016 litter – the Speedmaster Co-Axial Master Chronometer Moonphase Chronograph in steel and yellow gold.

For me, the real lesson here is to never truly judge a watch until it’s on your wrist. 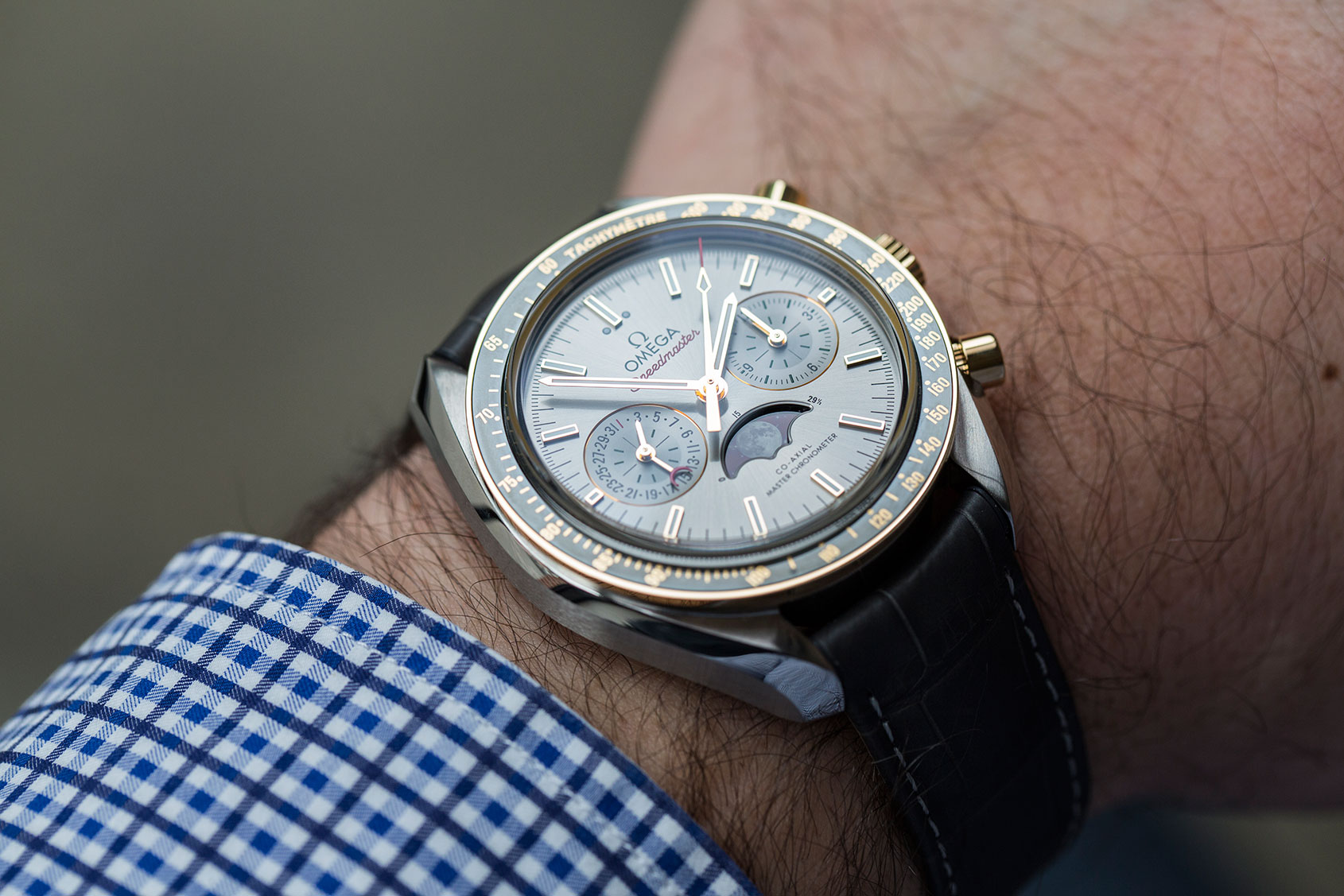 The crush I had on this watch was instant, and real. Earlier this year, I’d seen blue and black versions of the model that were the Baselworld centrepieces, and I liked them. But this was different. There was an immediate, almost visceral reaction as I strapped it to my wrist. 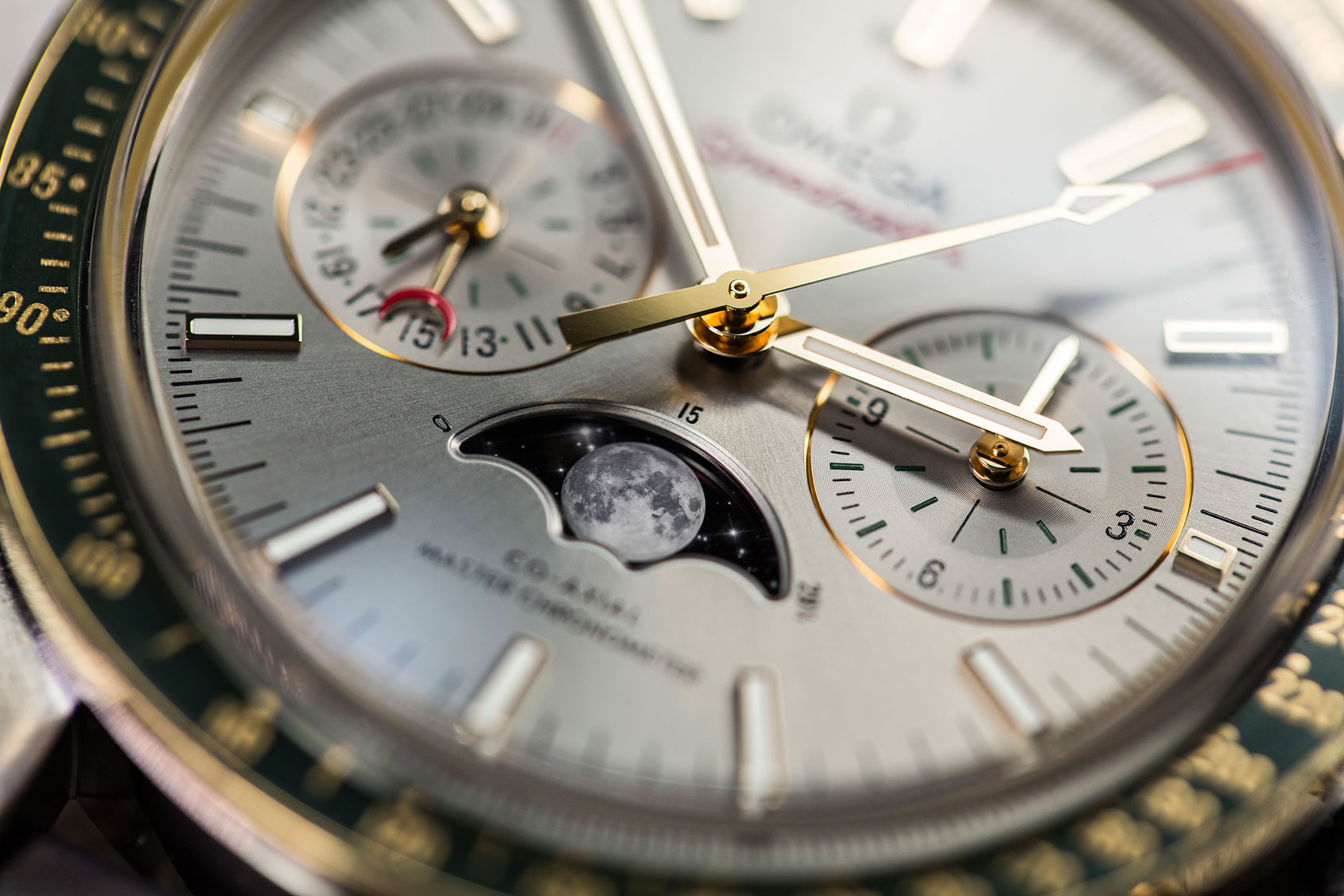 The grey sunburst dial, emerald green bezel insert, and yellow gold crown, pushers and bezel all work amazingly well together, adding up to a hefty dose of flash on the wrist, without being as hardcore as the fully gold versions. It’s also a look that speaks to the model’s heritage, the light dial reminiscent of the so-called ‘Italian-dialled’ Speedmasters of the ’80s, which were available in full steel or two-tone versions, made for Italian and German Markets.

But there’s more to the appeal of this watch than just the colour scheme. There’s the case, which clocks in at a substantial 44.25mm, the smooth grey alligator strap, the Master Chronometer grade Calibre 9904 movement. And then there’s that face-like dial (which appears, in these pictures, to be frowning), with stacked totalisers – 60-minute and 12-hour counters at three, date and small seconds at nine – and of course the show-stealing moonphase. 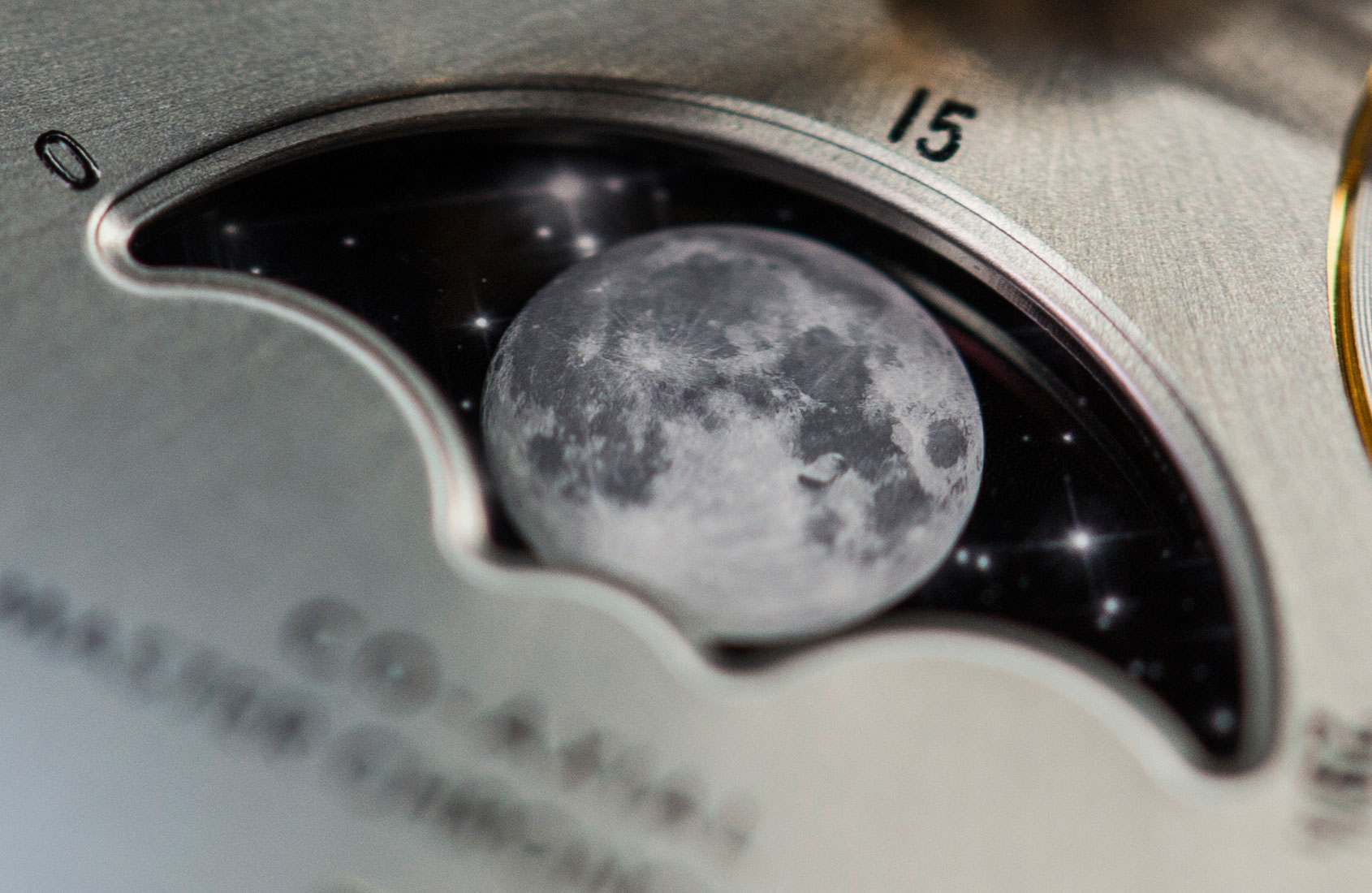 Not only does the starry sky and moon look like something you might have seen transmitted to earth on July 16, 1969, there’s also the boot print near the edge of the Sea of Tranquillity, right where Apollo 11 landed. It’s a cute element that’s done in a meaningful way, rather than coming off as gimmicky. It’s certainly less polarising than the cartoon dog on the dial of the Silver Snoopy Award Speedy. 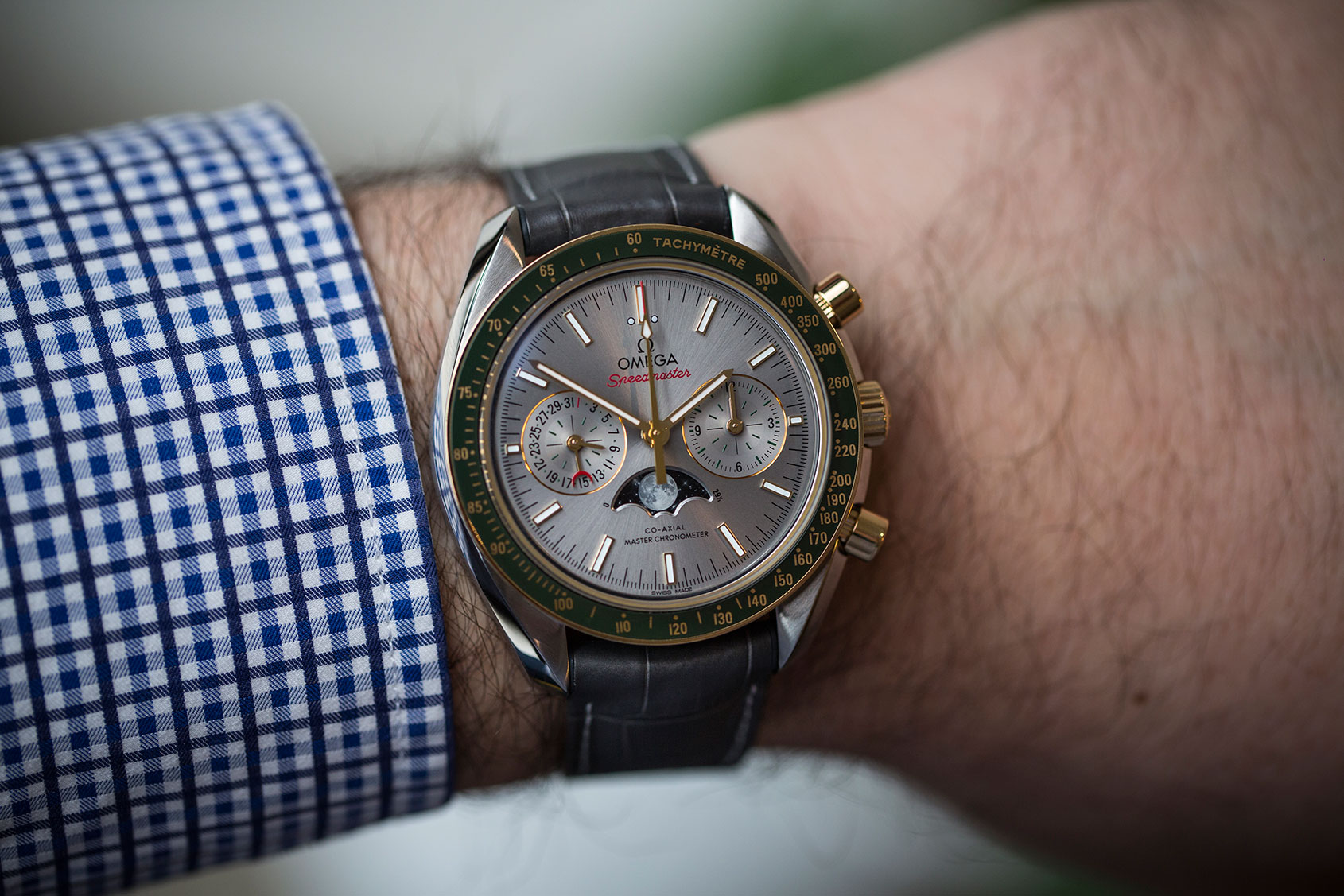 For me, the real lesson here is to never truly judge a watch until it’s on your wrist. If I were just looking at photography, I’d have quickly moved on, and missed out on wearing a great new take on an old classic.