MICRO MONDAYS: The Orator Sportsman Diver is the resurrection of a forgotten ’60s gem

With a name like Orator, you would expect this brand to have a good story behind it. Thankfully it delivers, as one of watchmaking’s forgotten brands that used to share the same limelight as Rolex and Blancpain. Although it’s likely you’ve never heard of the Orator Sportsman, the brand has been resurrected with the goal of honouring its past glory and becoming successful in its own right. The new Orator Sportsman Diver is a near-exact 1:1 recreation of the original watch from the ‘60s, and it’s ready to be a force in entry-level luxury. 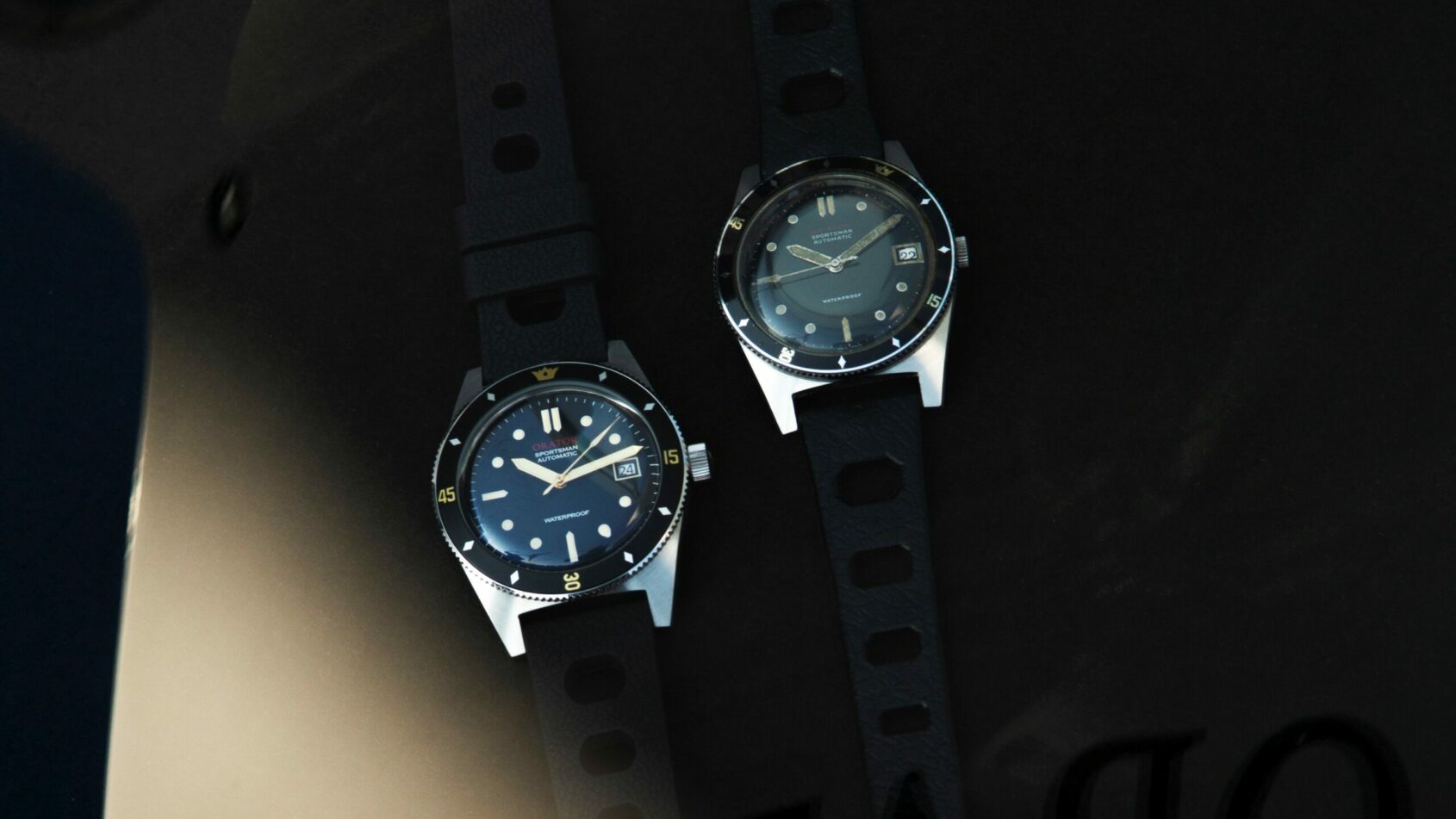 The original Orator brand has been around since at least the 1910s if not longer, although the history is a little murky due to the fact that Orator was one of many names used by Schild & Co — a company founded in La Chaux-de-Fonds by Otto Schild in the 1880s. Their most popular product by far was a pocket watch called Hebdomas, which not only impressed with an eight-day power reserve and gorgeous looks, but also was one of the first watches to popularise showing an open balance wheel on the dial without the whole thing being skeletonised. The Orator name remained as watches evolved, appearing on dress watches, military watches throughout WWII, and finally reaching peak popularity through the Orator Sportsman dive watch in the 1960s. But, despite developing a great reputation as a quality dive watch, Orator fell victim to the quartz crisis of the ‘70s and ‘80s and disappeared from the public consciousness. 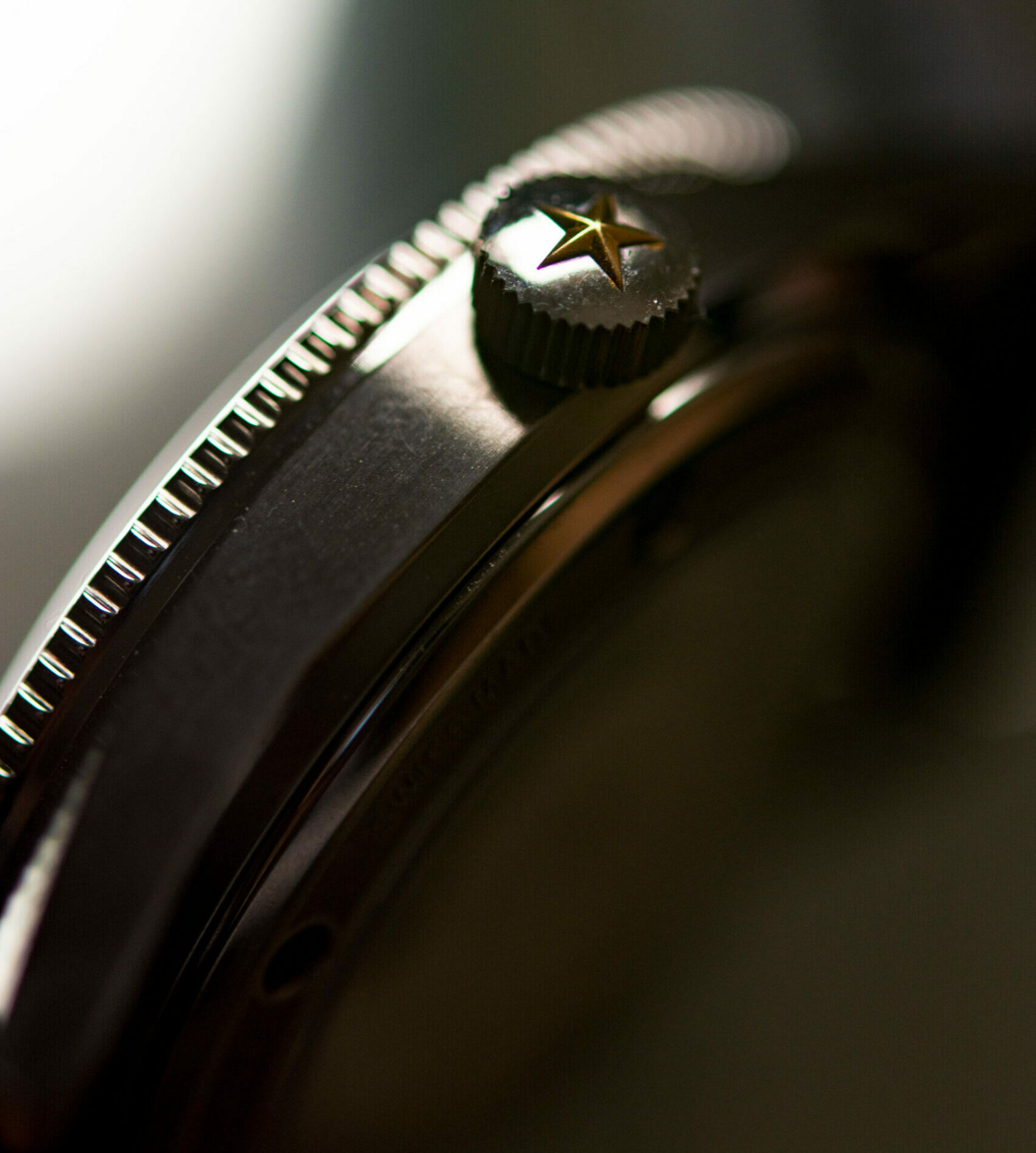 It speaks to the attention to detail of the modern Orator Sportsman that there’s only been one major change to the design, and you wouldn’t even be able to tell unless you held the two next to each other. While the measurements of the 1960s version was a svelte 38mm and 12mm thick, the new version has been beefed up to 40mm and 13mm thick, which is by no means any trouble to wear. The lug-to-lug distance is only around 45.5mm, which is almost deceptively short considering the bold presence of those stocky lugs. 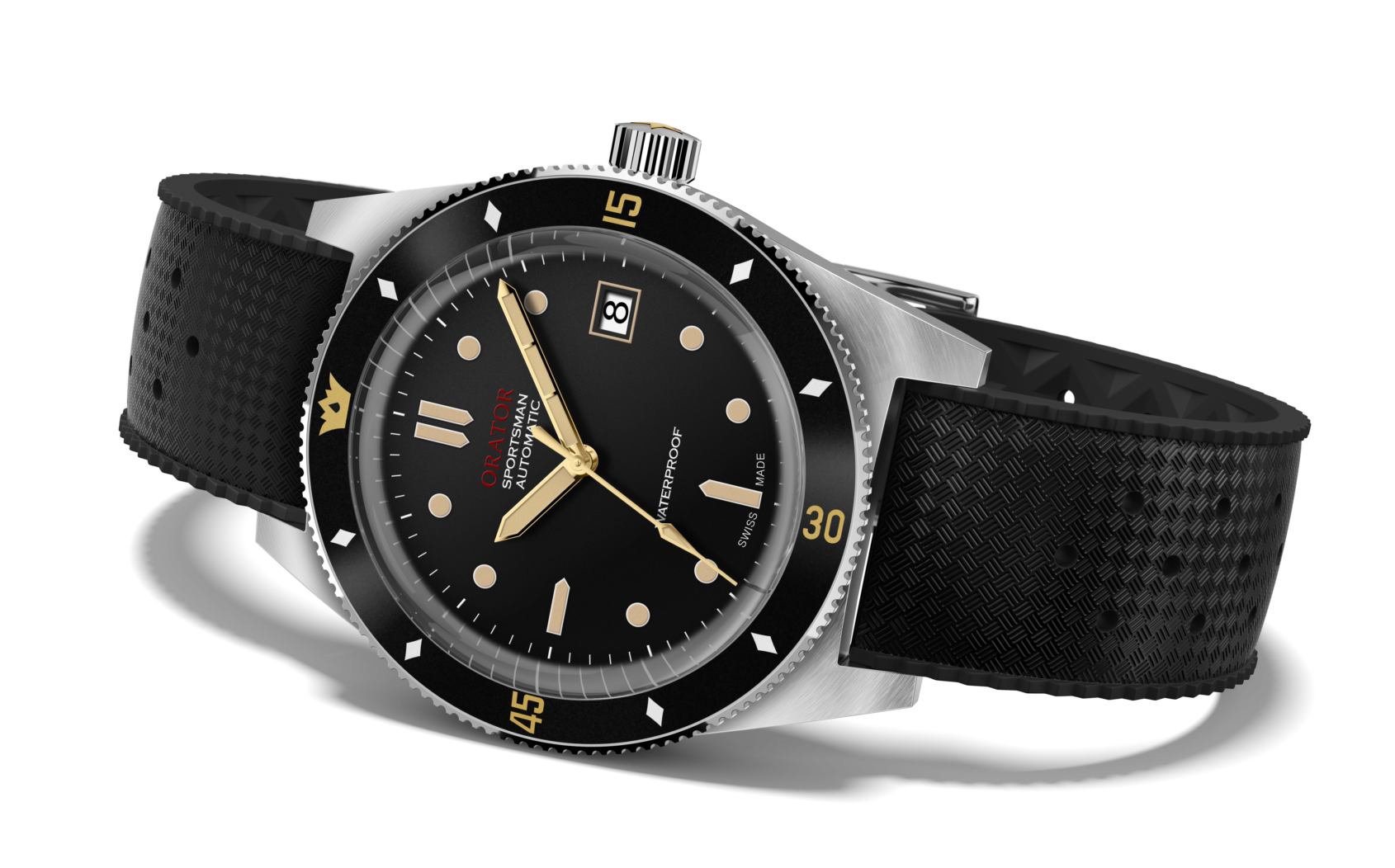 With a skin-diver aesthetic, the lugs appear quite rigid yet sophisticated. Overall, it’s not too dissimilar a design from the famous Seiko 62MAS shape, although there’s definitely enough unique identity behind the Orator Sportsman that nobody will confuse it for an homage. There’s a simple yet well-executed, radial-brushed finish across the surface, and the crown is unguarded. The crown is signed with a beautiful golden star, and screws down to secure the 100m water resistance. It may not be up to the 200m standard we expect for a modern dive watch, but it’s more than enough for the vast majority of swimming activities. 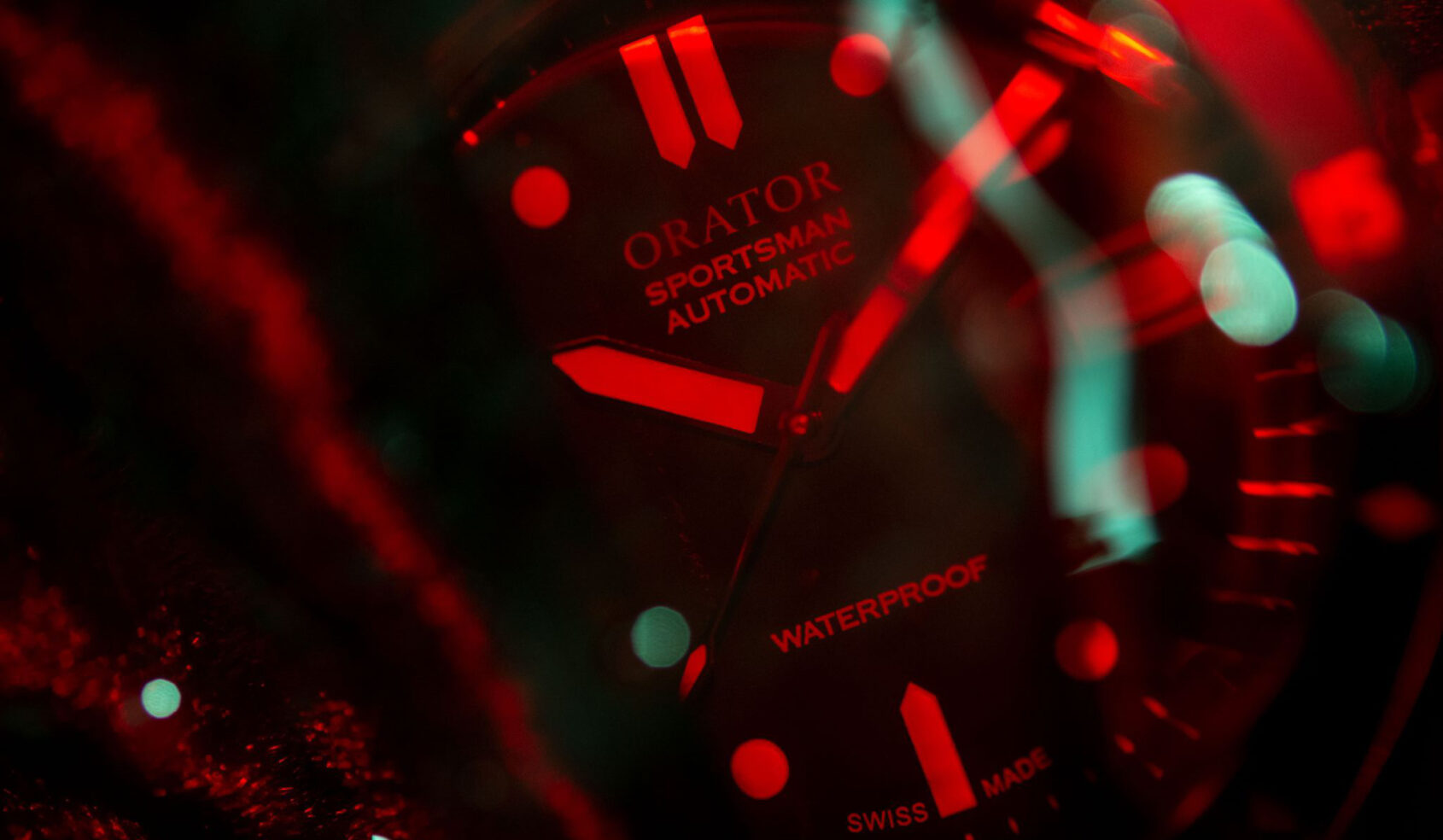 It’s truly uncanny how close they managed to recreate the dial of the original Orator Sportsman, and in such a way that captures the vintage flair without feeling overly dated. The Super-LumiNova used for the hour markers and gilt hands is a rich and creamy beige, while the printing of the white minute track, text, and the date display remains crisp. The Orator logo being printed in red is a brilliant pop of colour, and the ‘WATERPROOF’ text is a bold move considering that most companies don’t want the legal hassle of claiming more than water ‘resistance’. 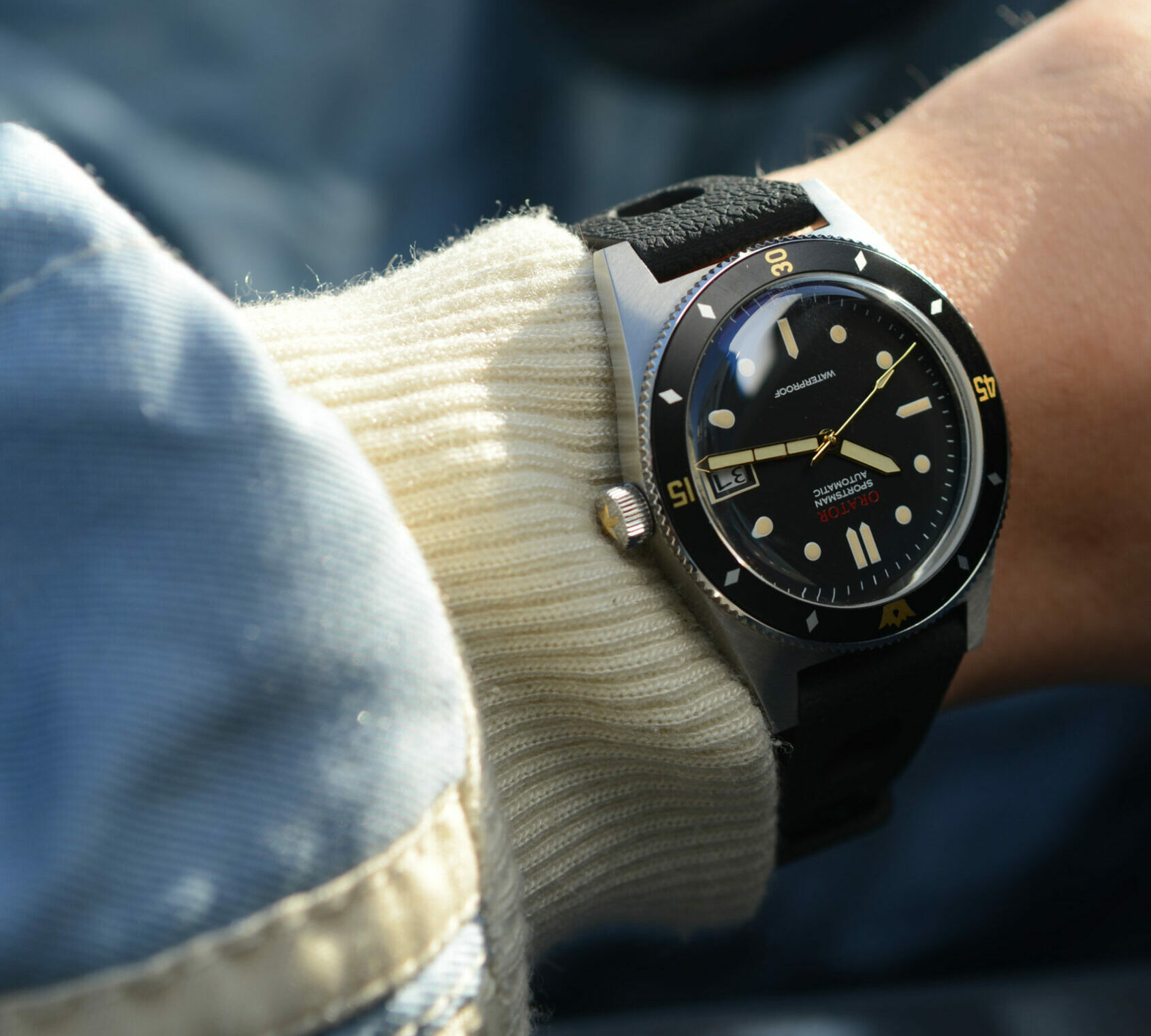 The bezel is perhaps the defining feature of the Orator Sportsman, with the aluminium insert having a few distinct characteristics. The crown at 12 definitely adds to the whole regal identity that the Orator brand name buys into, as do the diamond-shaped indices next to the hour markers. Elapsed time numerals do appear at 15, 30, and 45, although the 30 being flipped to its side to support symmetry is quite a quirky detail. If at the end of the day you’d prefer to have more of a modern twist on the established look, there is also a reference in blue available. 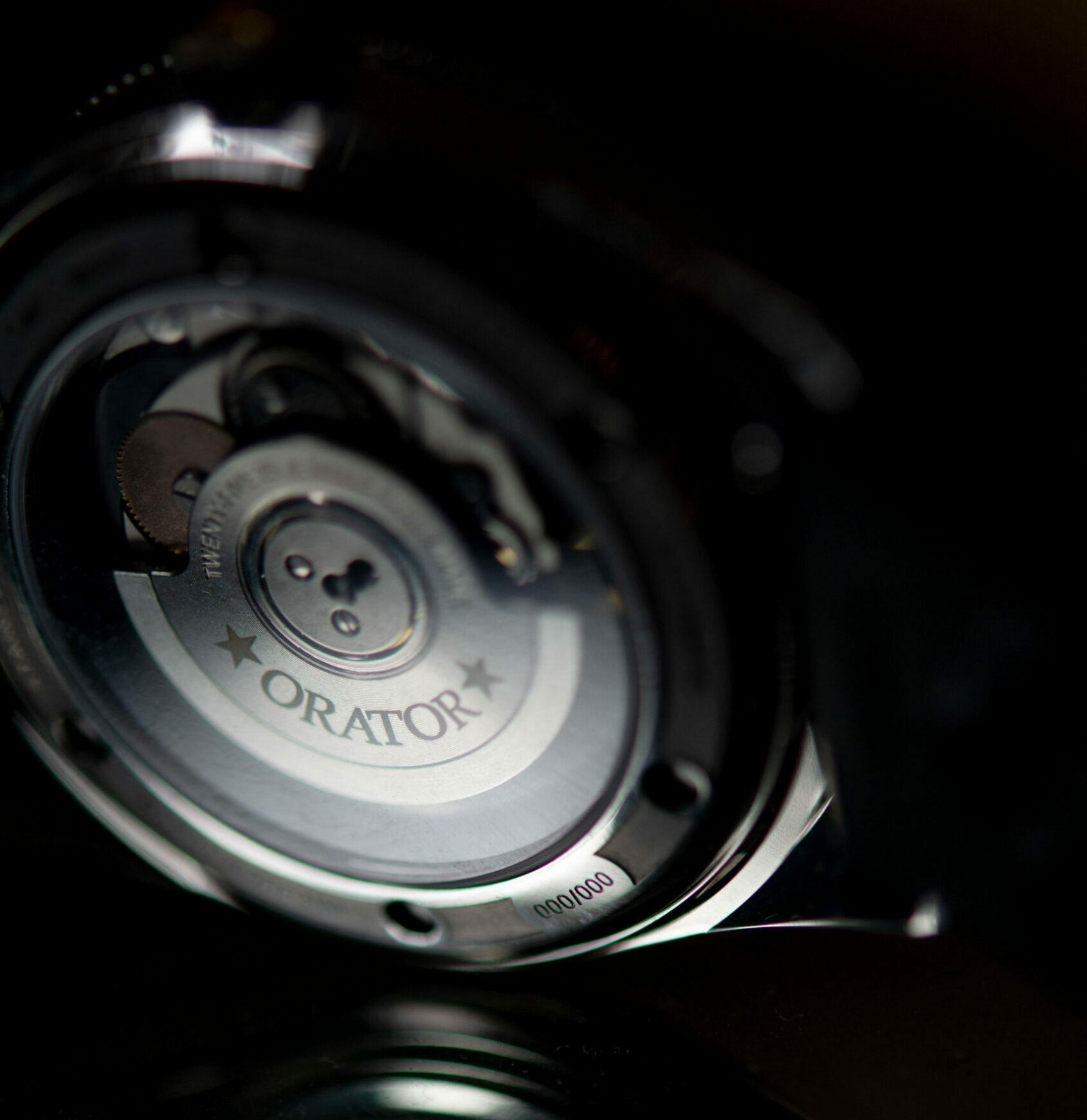 One aspect that definitely wasn’t included on the 1960s watch was a display caseback through which to view a Ronda calibre R150. Introduced in 2016, this automatic movement from the Swiss company Ronda has yet to reach the widespread recognition of similar movements such as the ETA 2824 or the Sellita SW200, but unlike those two, this movement is actually a new design. The specifications are similar though, with a beat rate of 28,800 vibrations per hour across a 40 hour power reserve, and the stated accuracy is also similar running between +/-12 seconds per day. 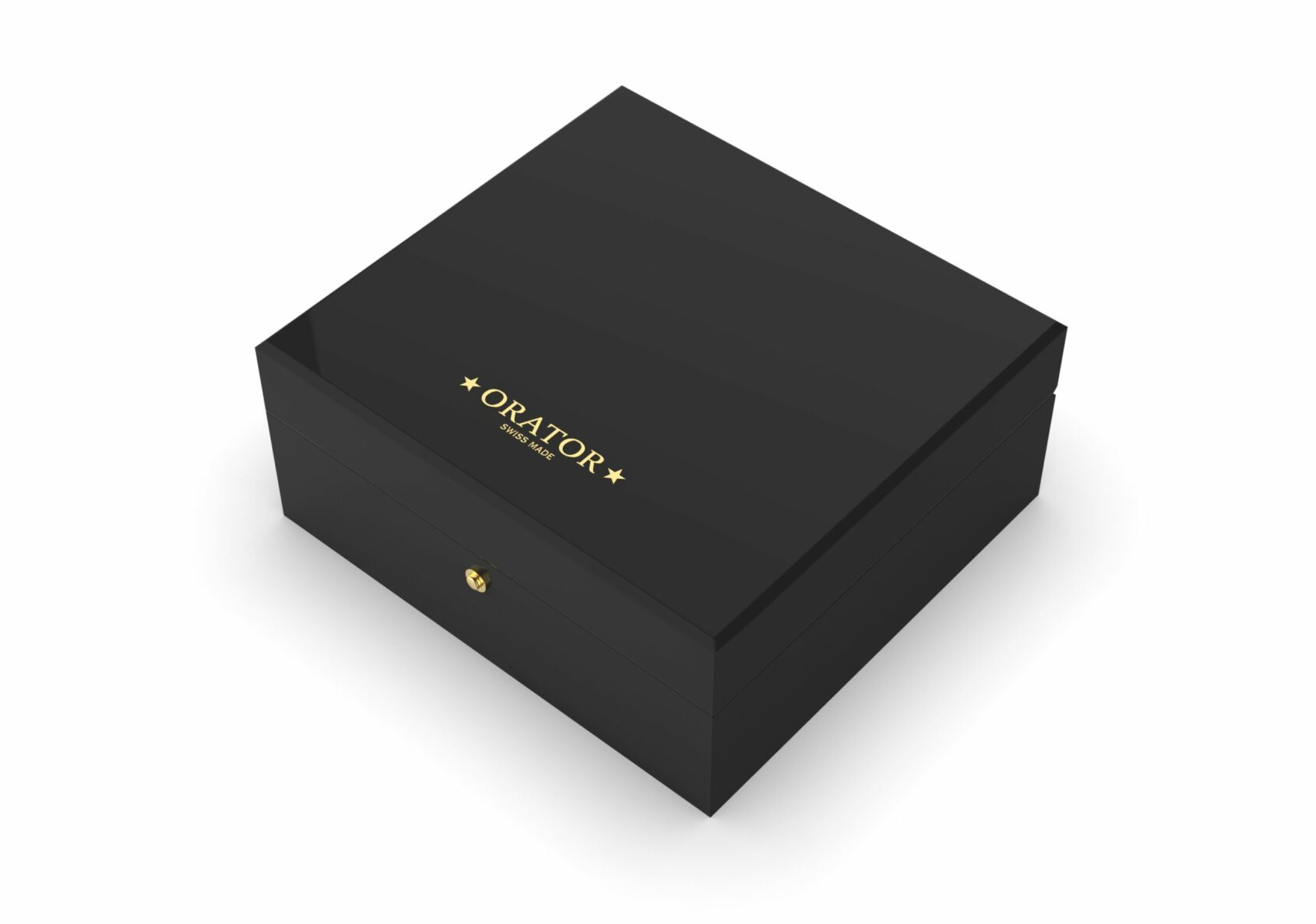 The Orator Sportsman Diver has launched on Kickstarter, and each of the black and blue colour variations will be limited to 888 pieces. Price: Early backers can get the watch for €750 before the price rises to €1,180