The concept of evolution over revolution is more than a catchy phrase, it also shows the dedication that a company has to perfecting a concept. Between the Manhattan, the Skymaster and the Hudson, Maen are a brand of structure and refinement. No detail goes unconsidered, and the result is something both charming and holistic. The latest addition to their catalogue is the Maen Hudson 38 GMT, adding new functionality to their classy diver and tweaking its looks in the process. 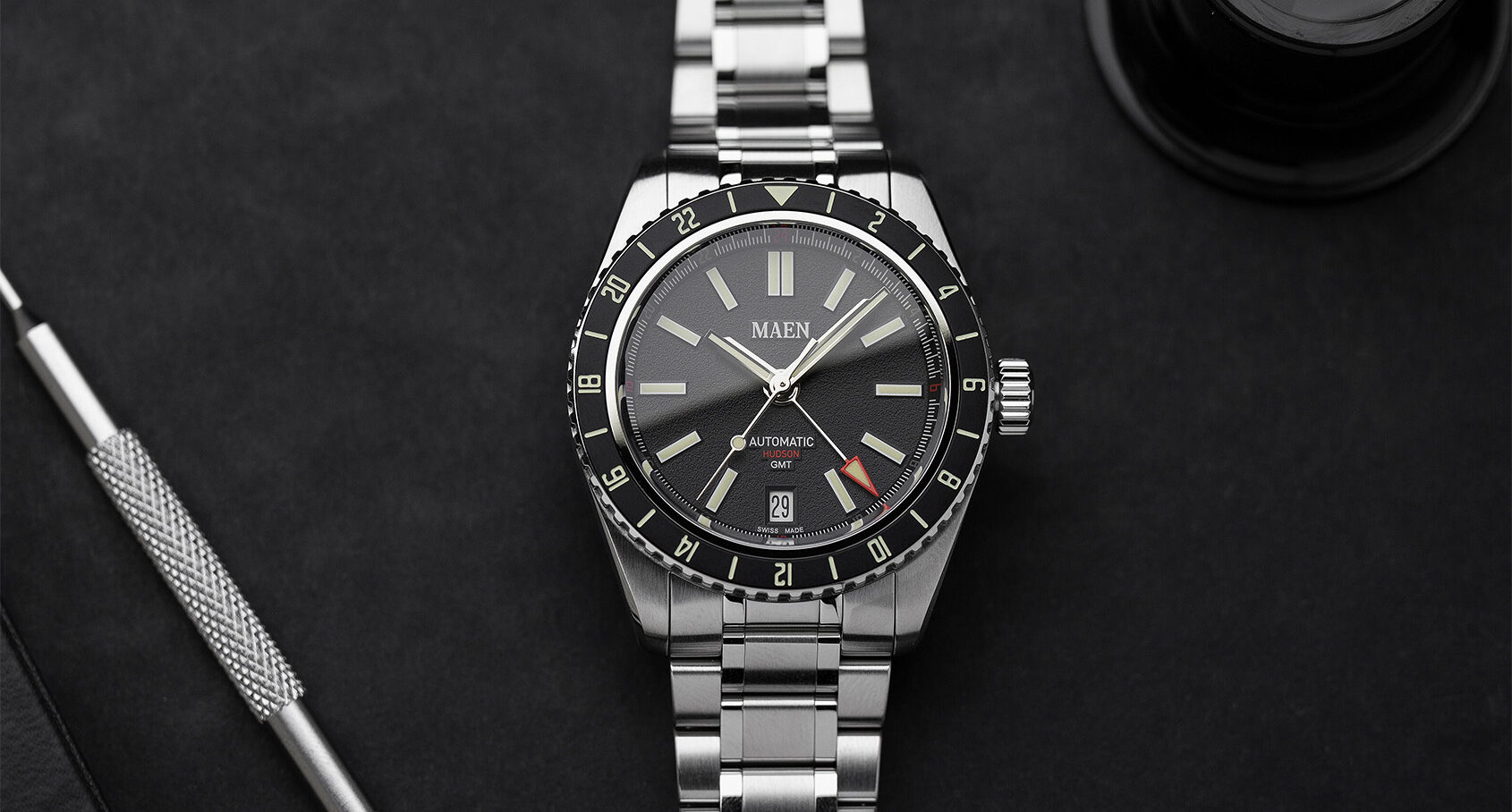 Comparing a Maen Hudson from its launch in 2018 to the current MK4 generation isn’t just interesting, but oddly heartwarming. The original version was a great watch, but four years of development and adaptation to emerging tastes has resulted in something far more special. The water resistance has tripled, the case is more subtly elegant, and the polished details elevate the whole look to that of a watch costing 10 times as much. The vertical brushing along the case is contrasted by polished chamfers, as well as polished surfaces on the bezel and bracelet. That bezel has some extremely nice finishing details too, with brushed tips on each individual grip. 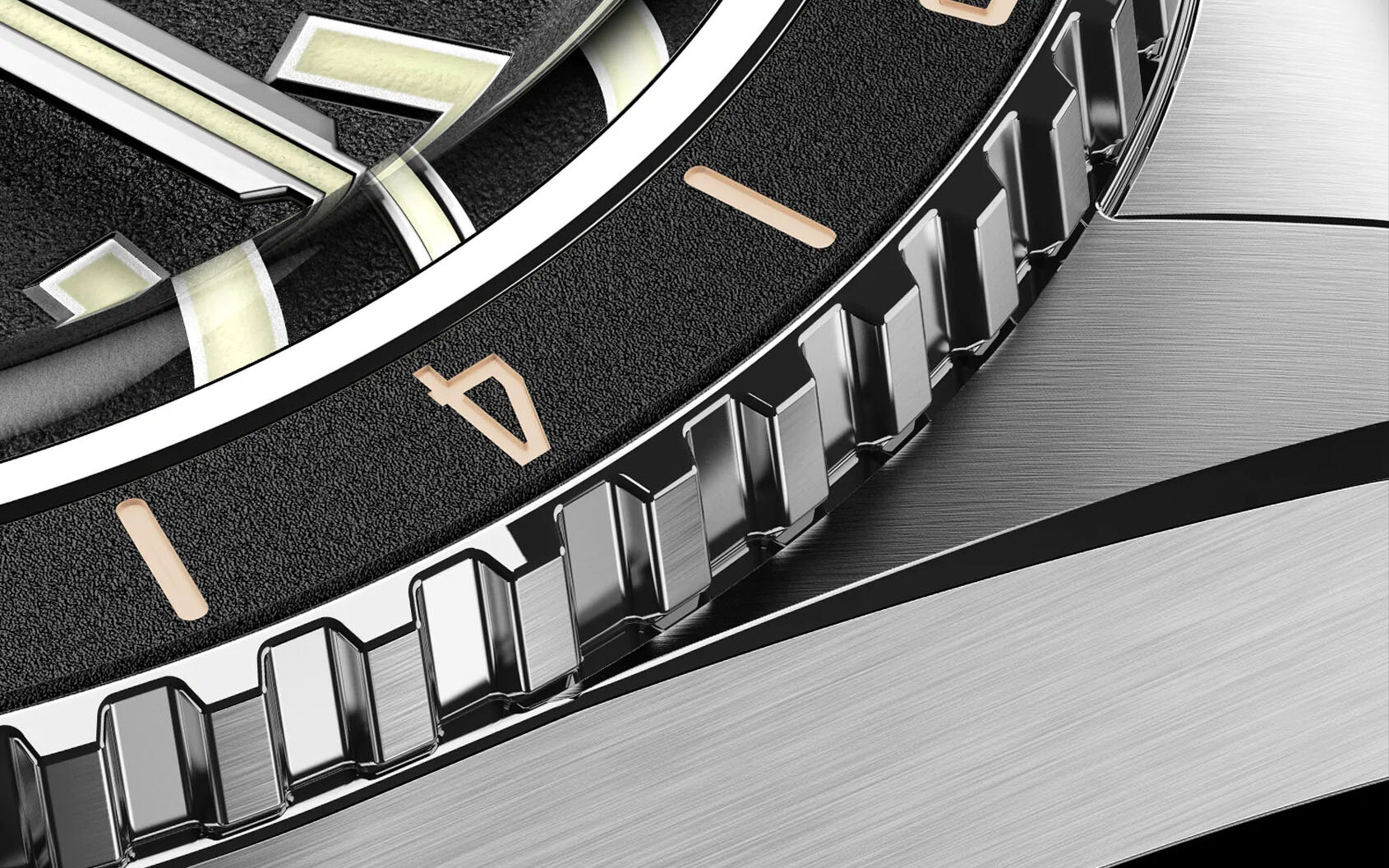 The bezel is the basis for the Maen Hudson 38 GMT’s three reference variations, with each simple insert change altering the personality of the watch considerably. The AGM.01 has a black insert with a sandblasted texture that matches the dial’s matte appeal, with beige 24-hour markers that allow you to track an extra time zone. The AGM.02 takes a more tool-like approach with a steel insert, also carrying that gently stippled texture which is a nice switch up from brushed bezels. The AGM.03 goes for a remarkable root-beer colour scheme with a brown half and gilt details, giving the whole watch a 1970s flair that’s totally mouthwatering. 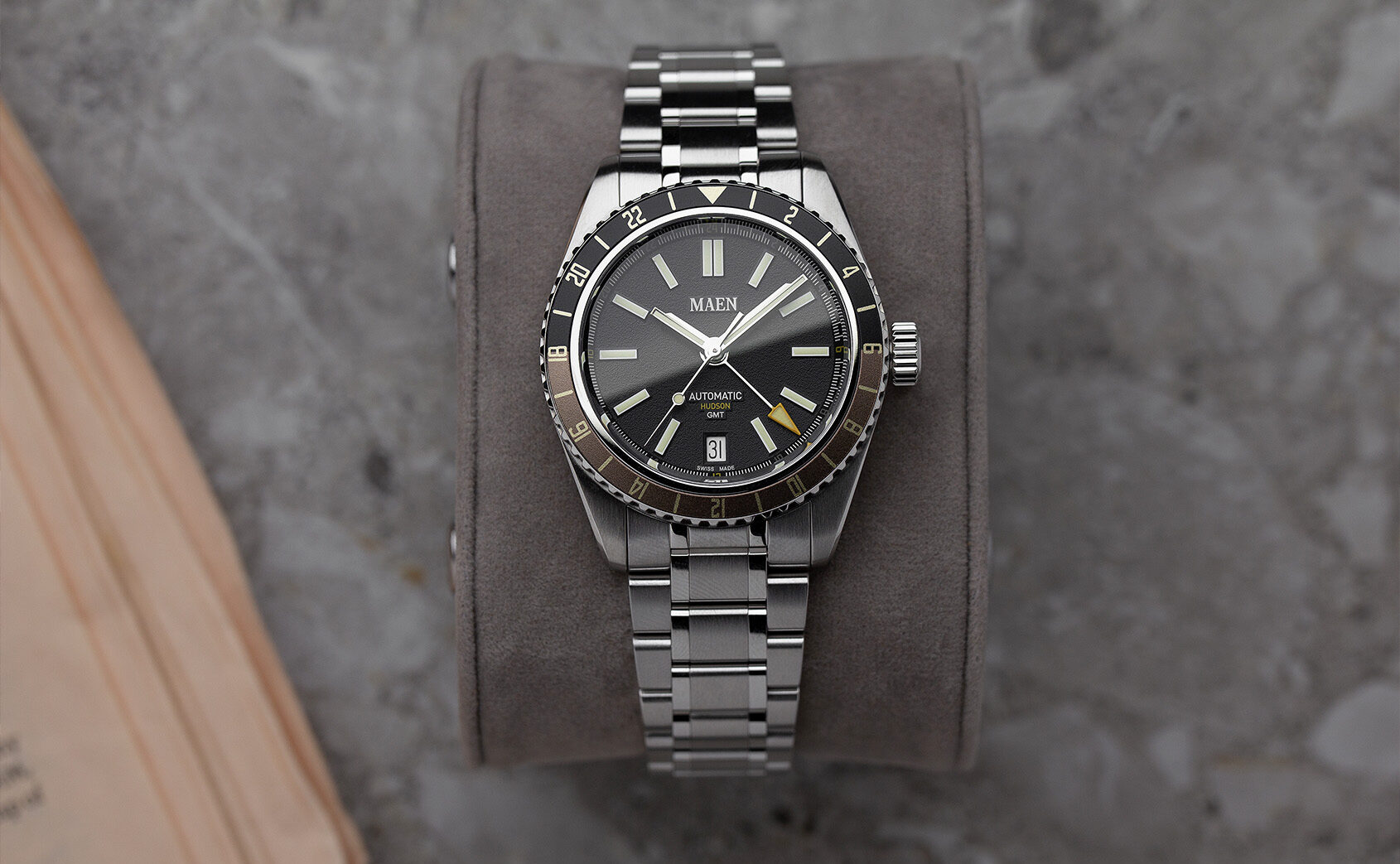 The Maen Hudson 38 had already got the dimensions spot-on with its first iteration, so the MK4 hasn’t wandered far. A 38mm diameter is the perfect size for a sports watch like this with dressy sensibilities, balancing its visual toughness with grace on the wrist. The lug-to-lug retains great wearability across a variety of wrists at 46mm, without the lugs feeling prematurely clipped. Considering the fact that the Maen Hudson 38 GMT uses an automatic movement with both GMT and date complications, it’s impressive that the case is only 12mm thick including a domed sapphire crystal and 300m of water resistance. 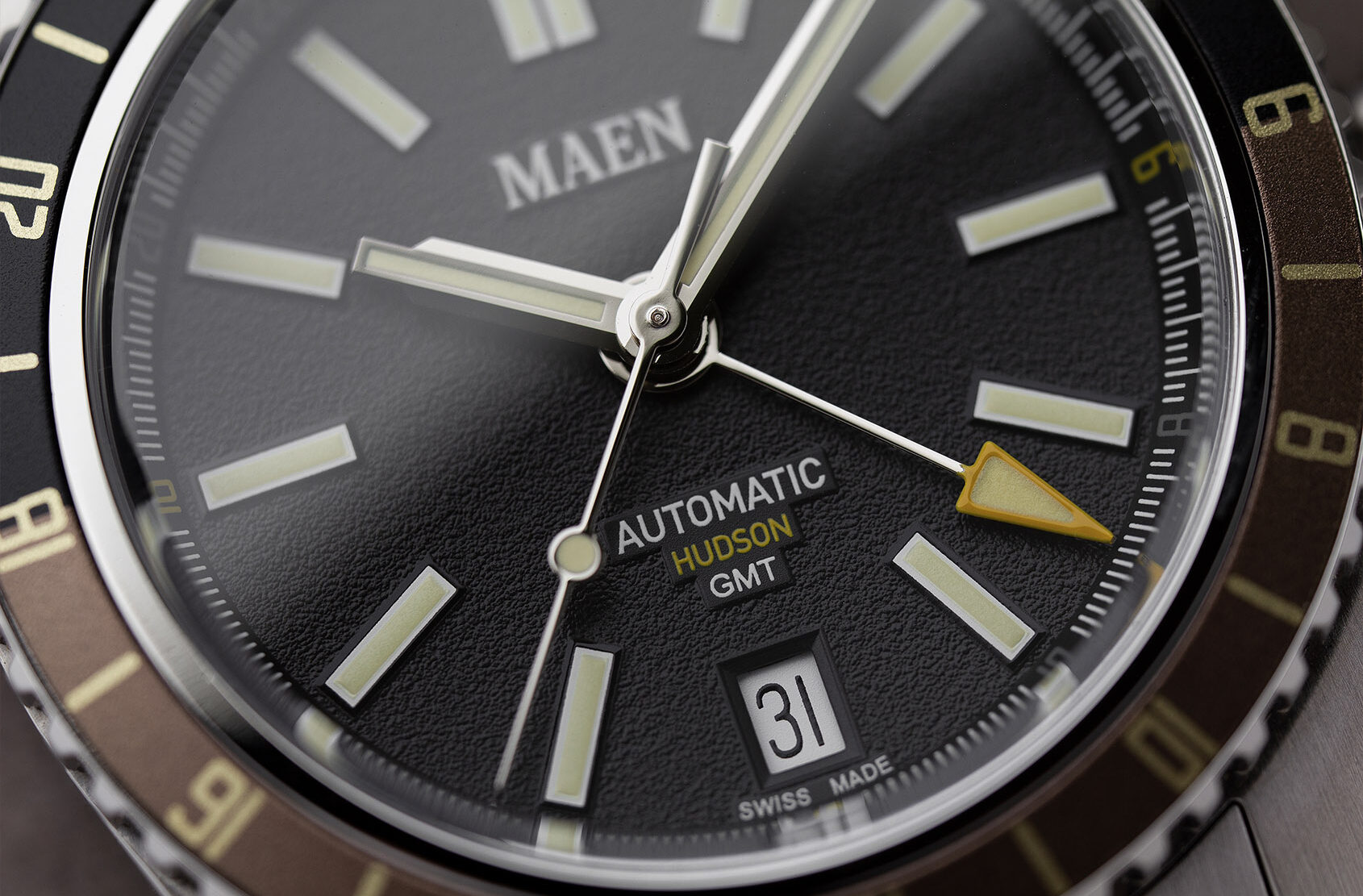 It may be my personal opinion, but I think the dial of the Maen Hudson 38 shines far more with the addition of a GMT hand and a 24-hour bezel insert. The emphasis of the red-tipped GMT hand (orange on the root-beer model) helps to balance out the relative complexity of the hour and minute hands with their beige lume, each shaped like mini-skyscrapers of New York City. Those, and the lollipop accent on the seconds hand, add just enough unique character to the dial for the rest of it to be tastefully simple. Rectangular hour markers are placed around a grey, printed minutes track which also has 24-hour markings and red highlights at the quarters. 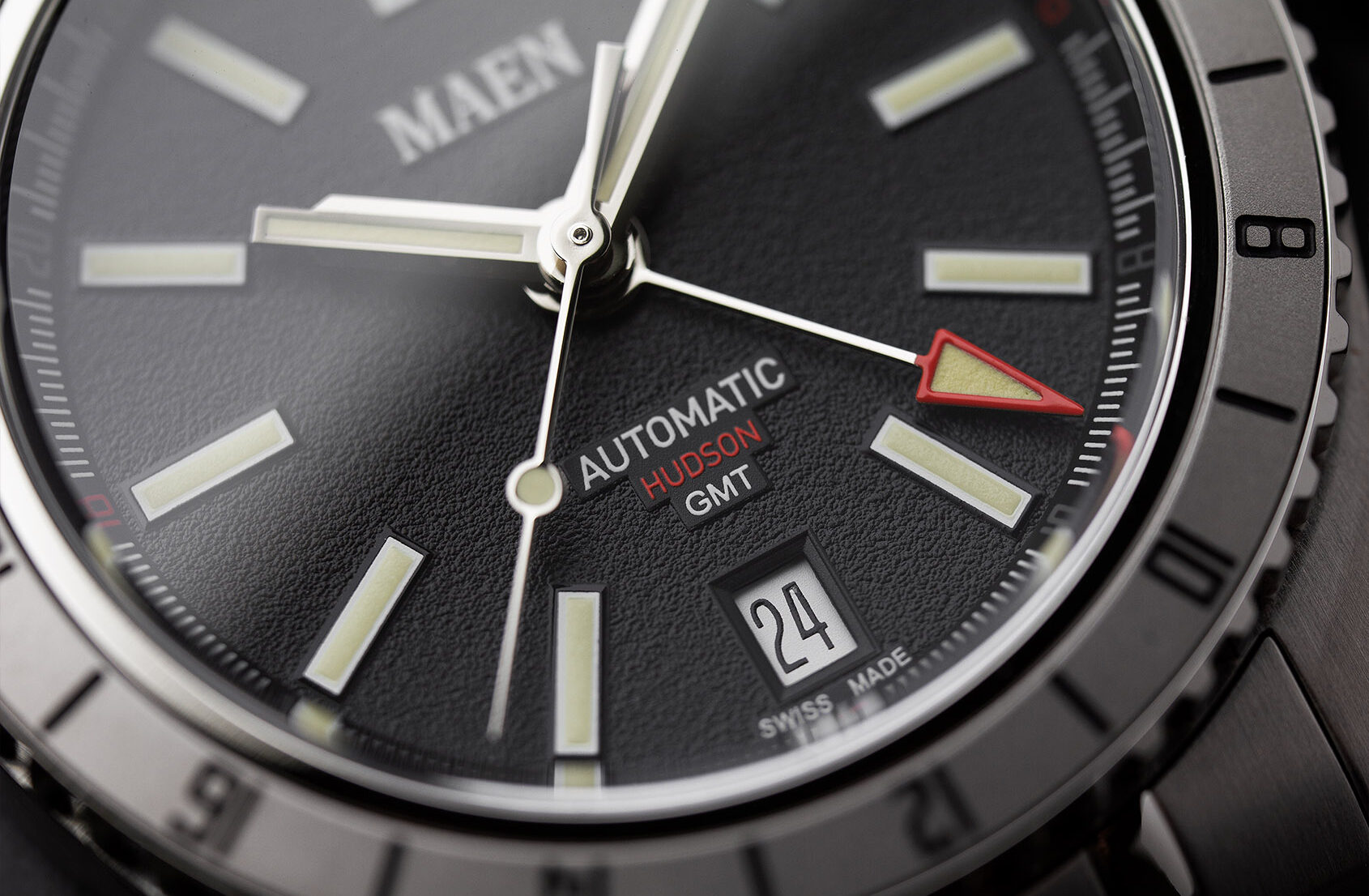 The sandblasted texture on the dial provides a soft graininess that implies age gently without going overboard, and also allows the printed text to seem more crisp in contrast. The Maen logo is nothing special on paper, but the tall serif typeface gets the tone just right for what is ultimately a very respectable watch. The date window at 6 o’clock ensures that the sense of symmetry is never lost, and there’s no awkward trimming of an index which would otherwise feel somewhat clumsy. 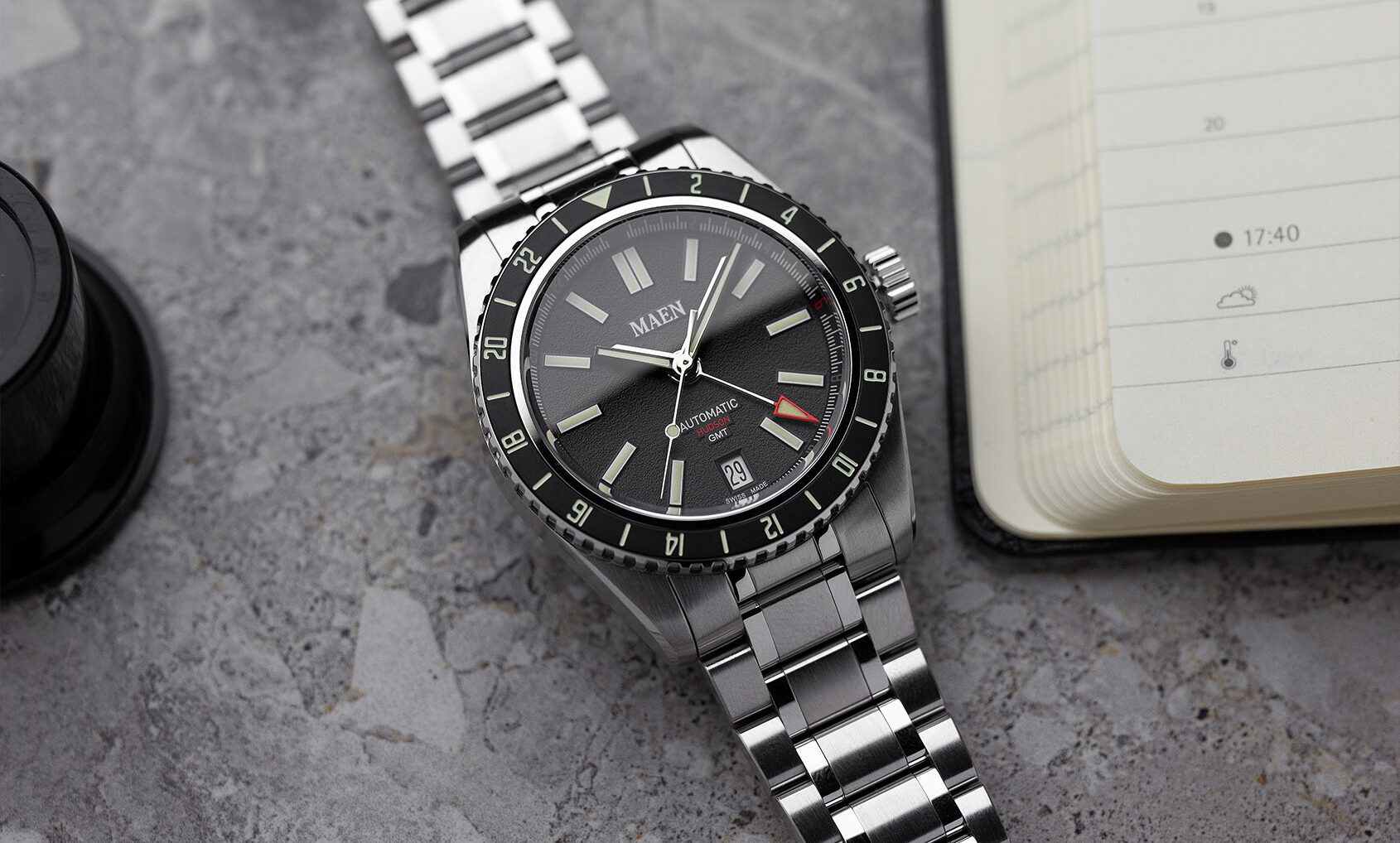 The Maen Hudson 38 GMT uses the Soprod C-125 movement, a calibre that has been picking up in popularity among microbrands especially in the last two years. Owned by the Spanish watch brand Festina, Soprod’s movements have an air of mystery about them due to the domination of ETA and Sellita in affordable Swiss-made movements, but the reports from owners are all seemingly very positive. It’s rumoured that the Soprod C-125 was actually designed by Seiko before Soprod acquired the rights to produce it, but there doesn’t seem to be any concrete evidence for this. Functionally, it’s very similar to the ETA 2893-2, with a quick-set GMT hand, 4Hz beat rate, and a 42-hour power reserve.

The Maen Hudson 38 GMT will be available for preorder from December 7 at a discounted rate. You can sign up for notifications and VIP offers at their website here. Price: $712 USD ($752 USD RRP)