Melbourne isn’t known as a hotbed of horological activity. Indeed, Patek Philippe was founded more than a decade earlier than Melbourne was even recognised as a city. But that hasn’t stopped Melbourne watchmaker John Robert Wristwatches announcing their Archetype collection this week that’s inspired by the dress watches of the 1950s and 60s only with a few modern tricks up its sleeve. As the city is twice as close to Antarctica as it is to Geneva, you might think it’d lack the technical chops you’re used to seeing from well-made Swiss or Japanese watches. But the John Robert Wristwatches Archetype collection proves that the tyranny of distance is a challenge that can definitely be overcome. 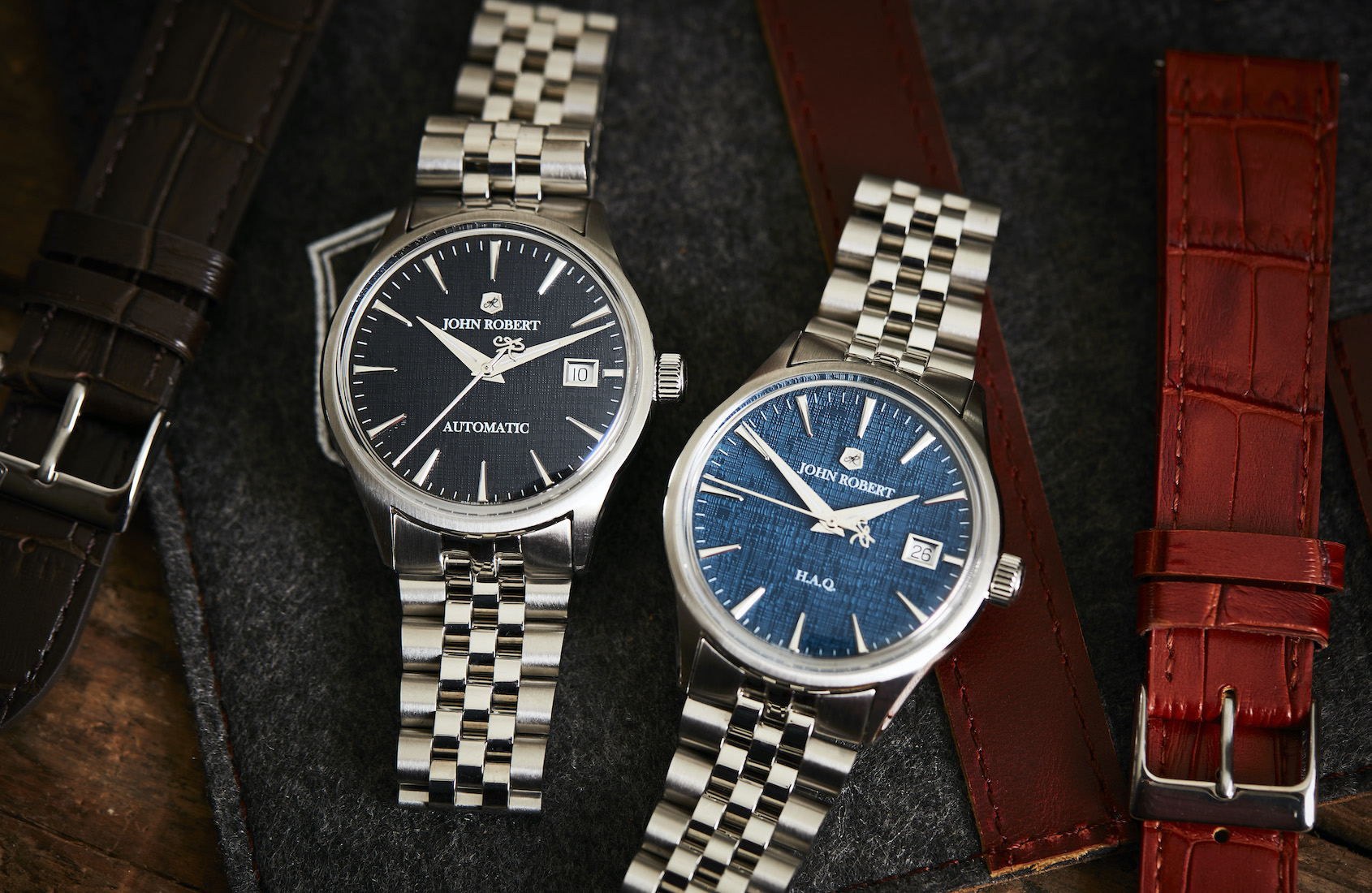 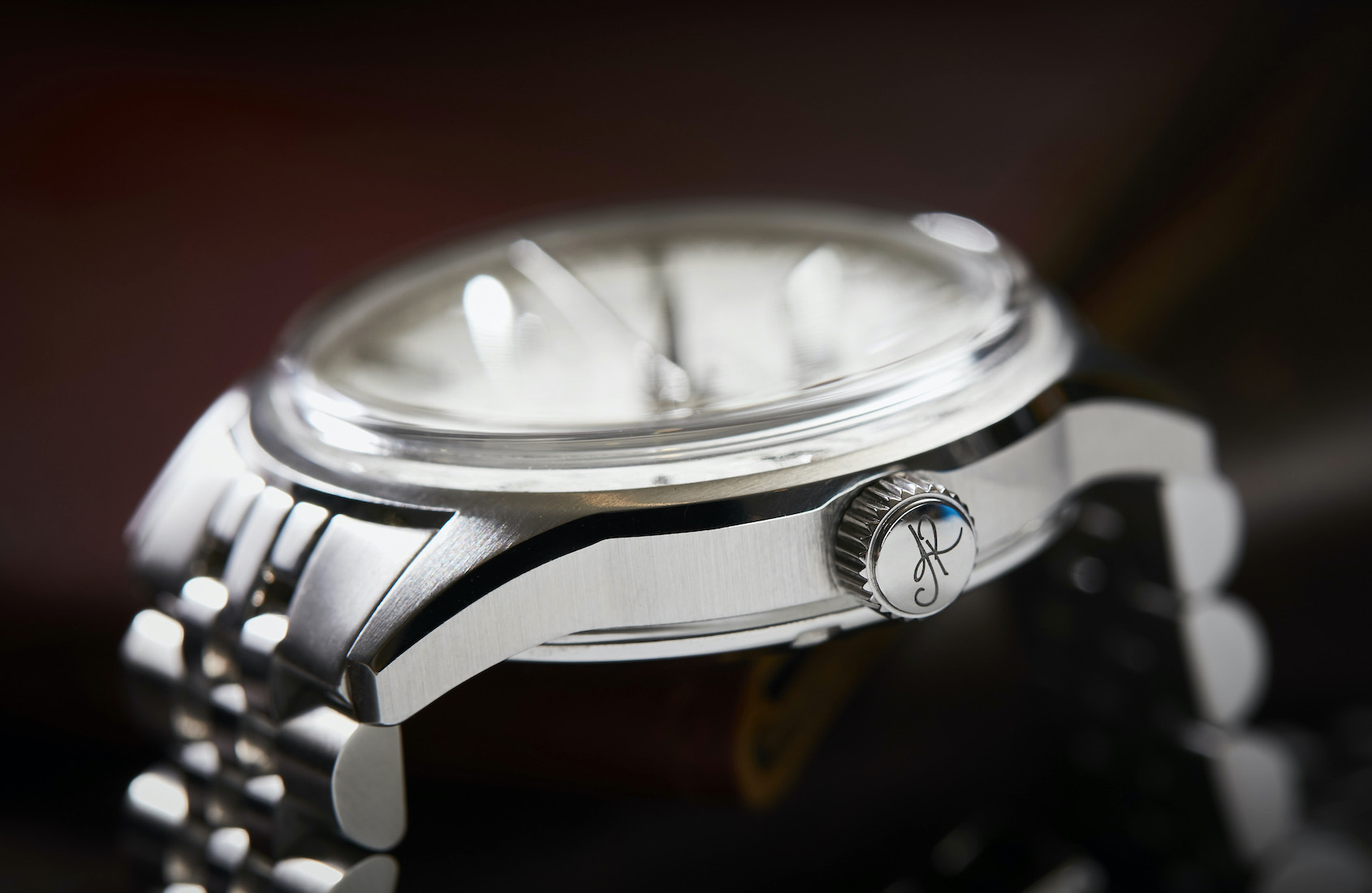 The John Robert Wristwatches Archetype collection offers six different references in total, with an automatic movement or a High Accuracy Quartz (HAQ) caliber all featuring the choice of blue, white or charcoal dials. True to their mid-century inspiration, the 316L stainless steel cases measure 38mm in diameter, with a practical 20mm lug width. 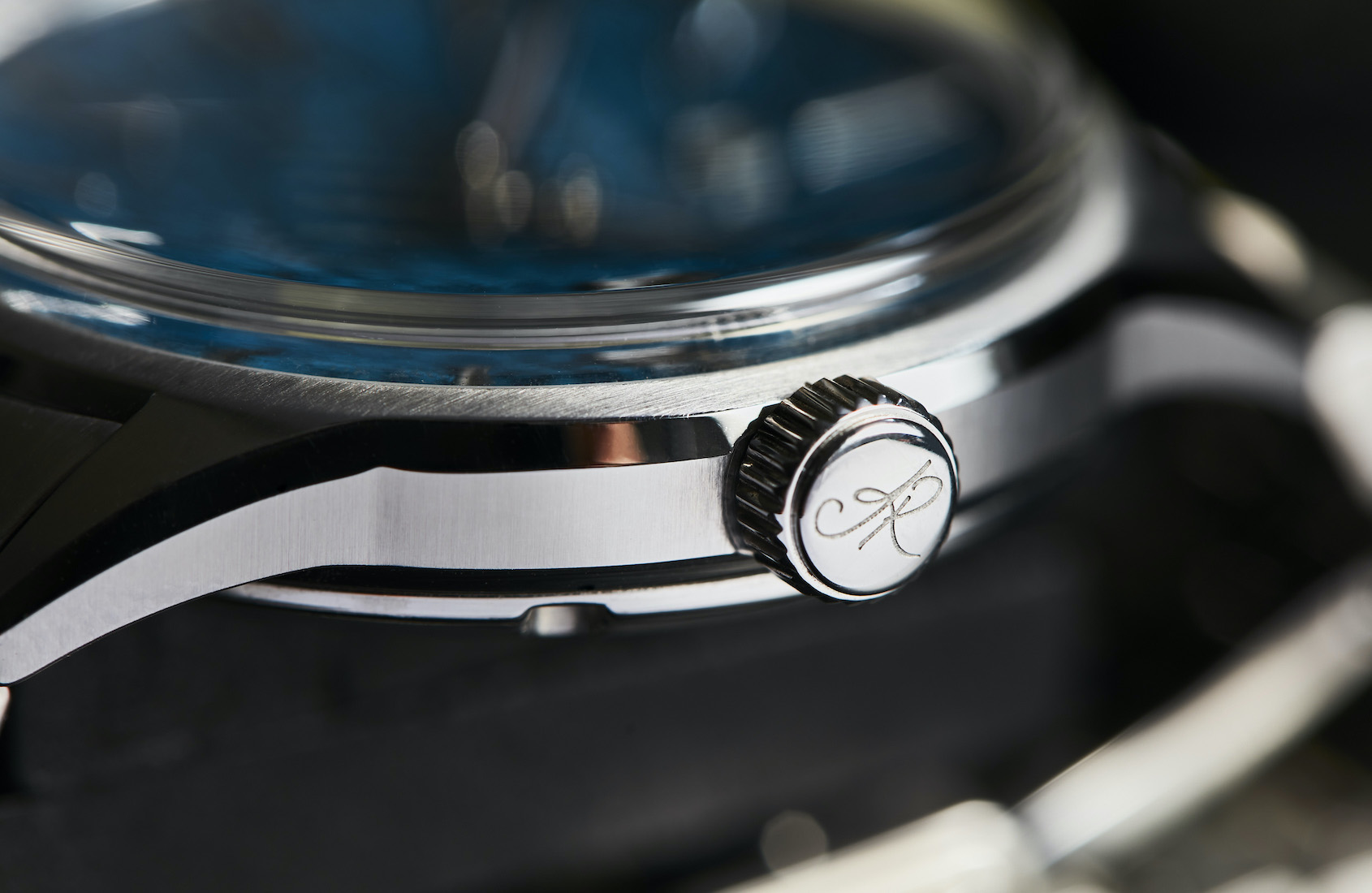 While not examples of ultra-thin watchmaking, the cases are also kept slender with the automatic references measuring 12.4mm thick, while the HAQ sits just 11.4mm thick. All of the watches feature the nice touch of signed John Robert crowns and are both guaranteed to 100m of water resistance. 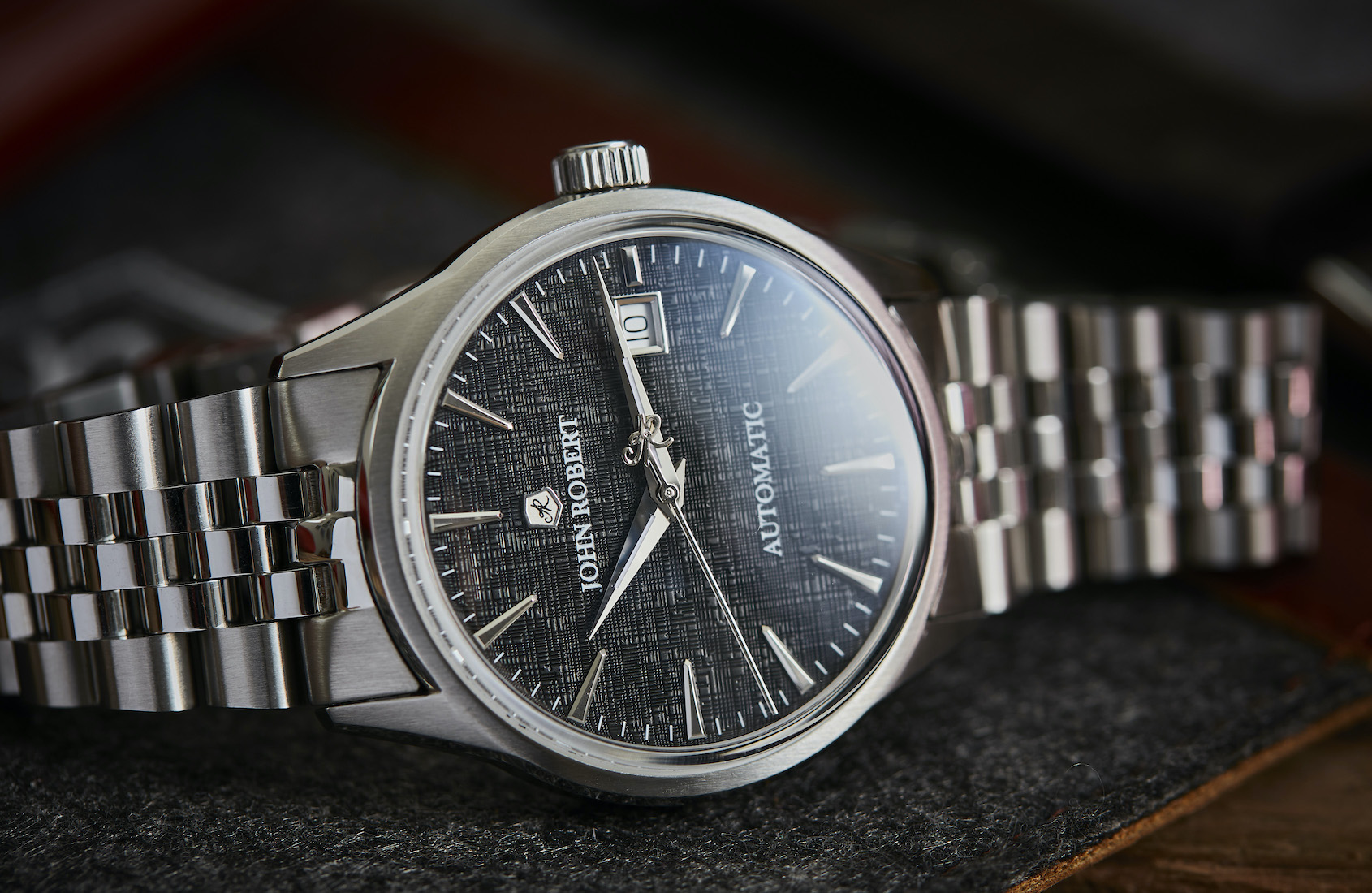 This level of water resistance is a departure from the moisture vulnerable dress watches of the past and is a welcome feature for anyone who has owned a vintage watch and seen that dreaded cloudy crystal over the dial. It also speaks to the more robust philosophy behind what the John Robert team is building with the idea of the “dressy tool watch”. Which basically is a watch that can handle almost anything you’d want to do while wearing it, but can still be dressed up if you wear a suit and tie to work. 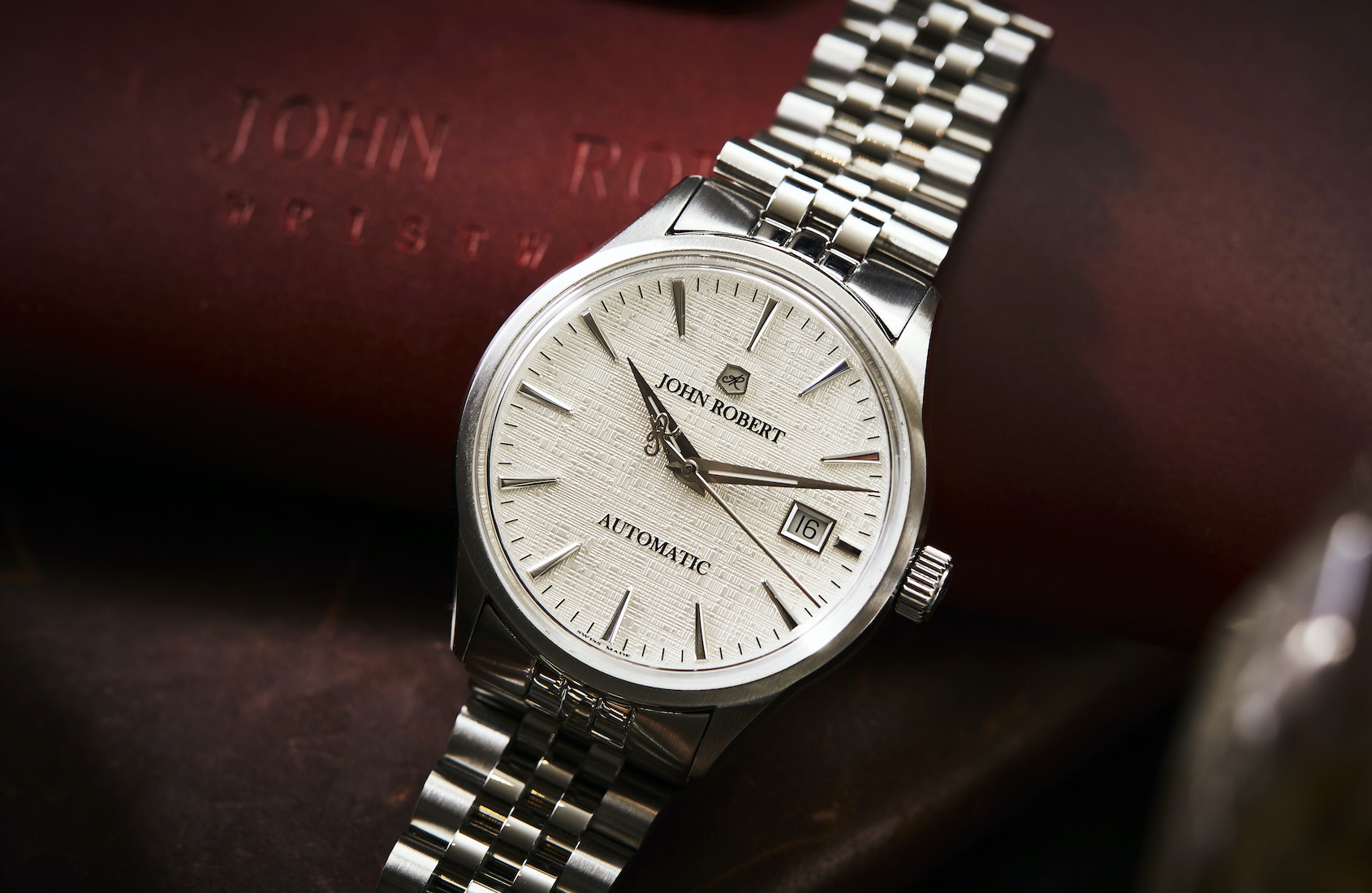 The 10 atmospheres of pressure are guaranteed thanks to a screw-down caseback for both the quartz and automatic versions of the watch. The automatic models feature a sapphire-crystal caseback that offers a clear view of the movement within and the highlights of the specifications around its circumference. 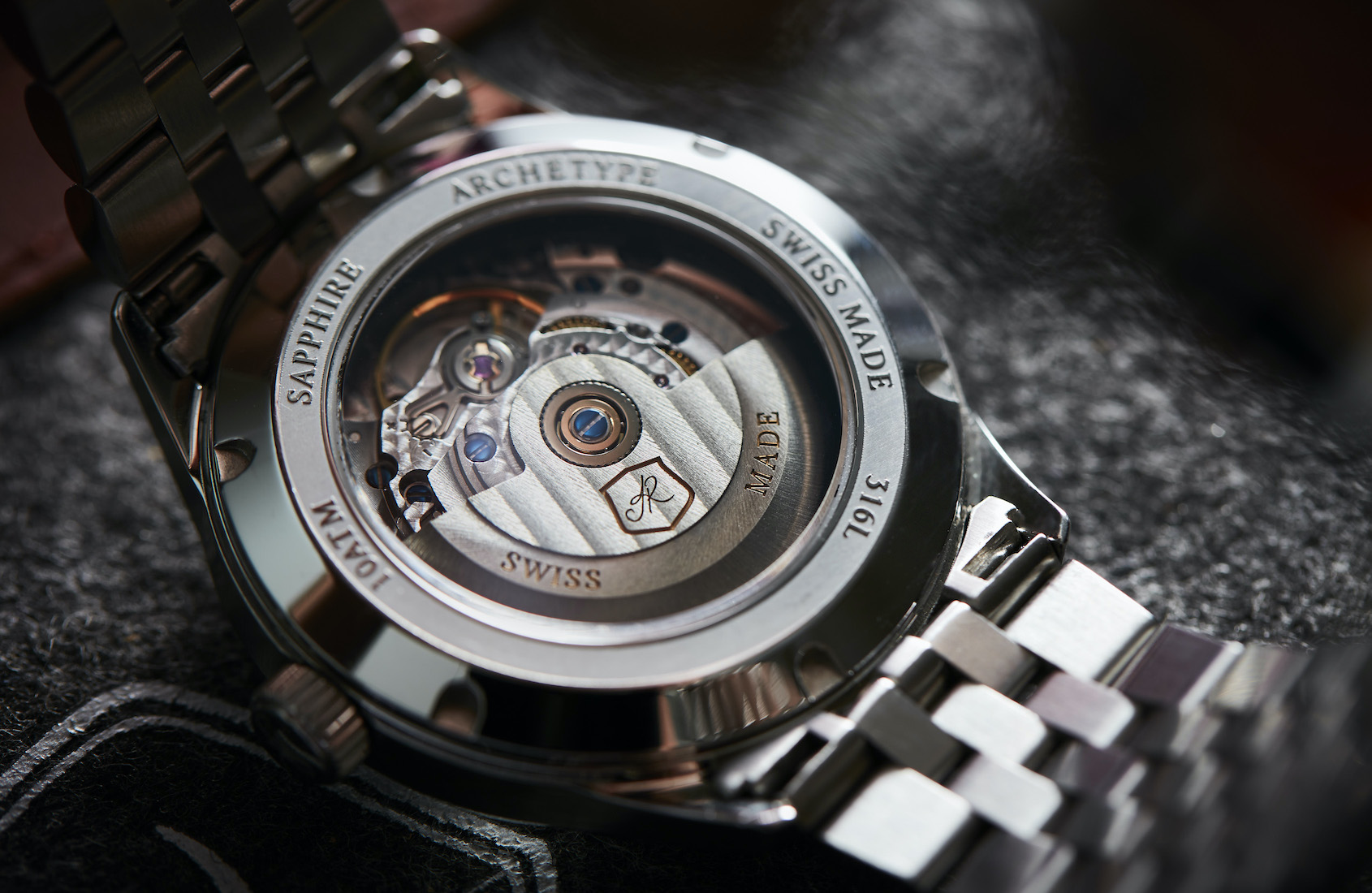 In contrast, the HAQ references feature a closed caseback that proudly displays the polished embossed JR signature logo, with the rest of the steel surface revealing a sandblasted finish. 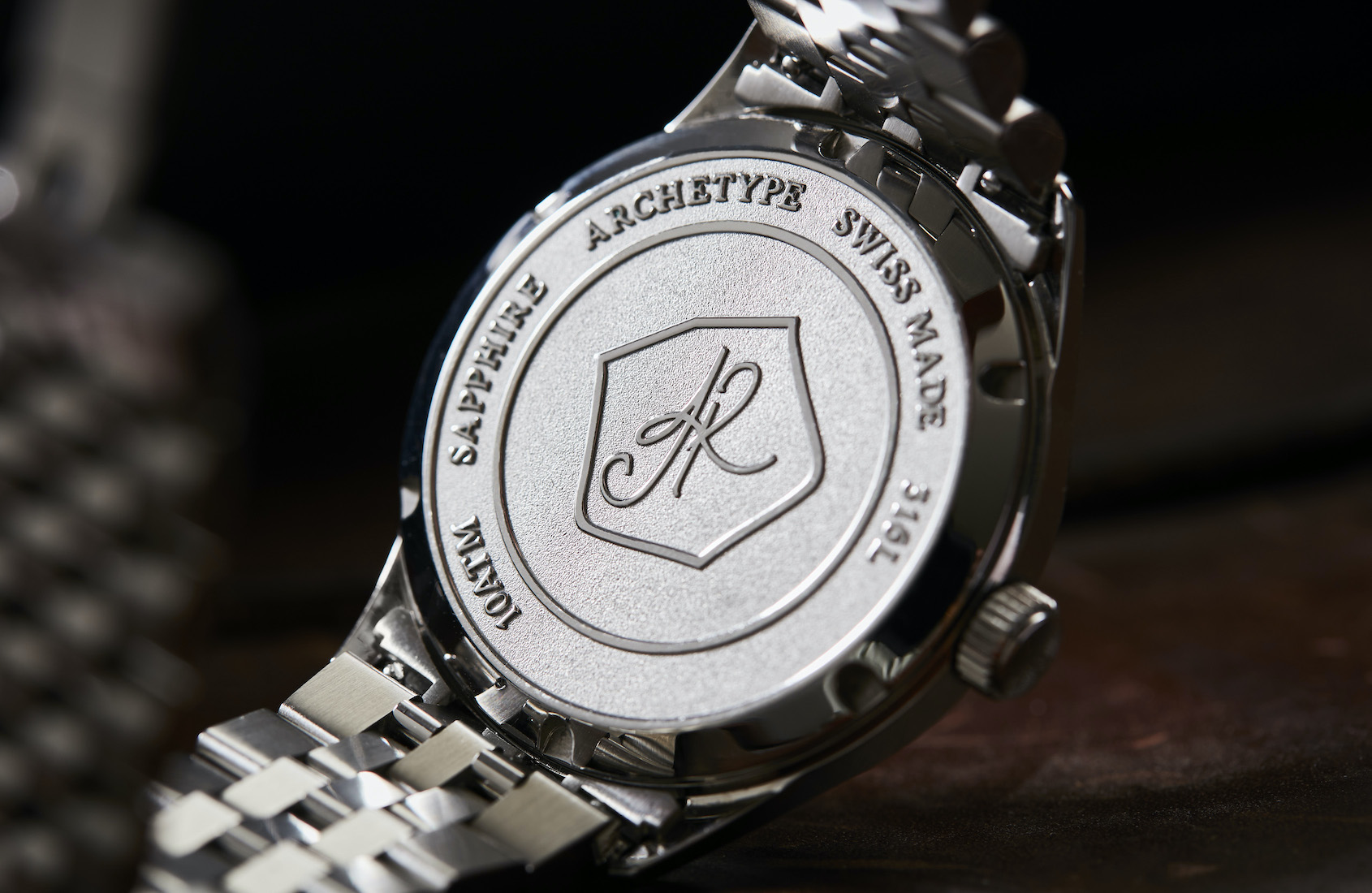 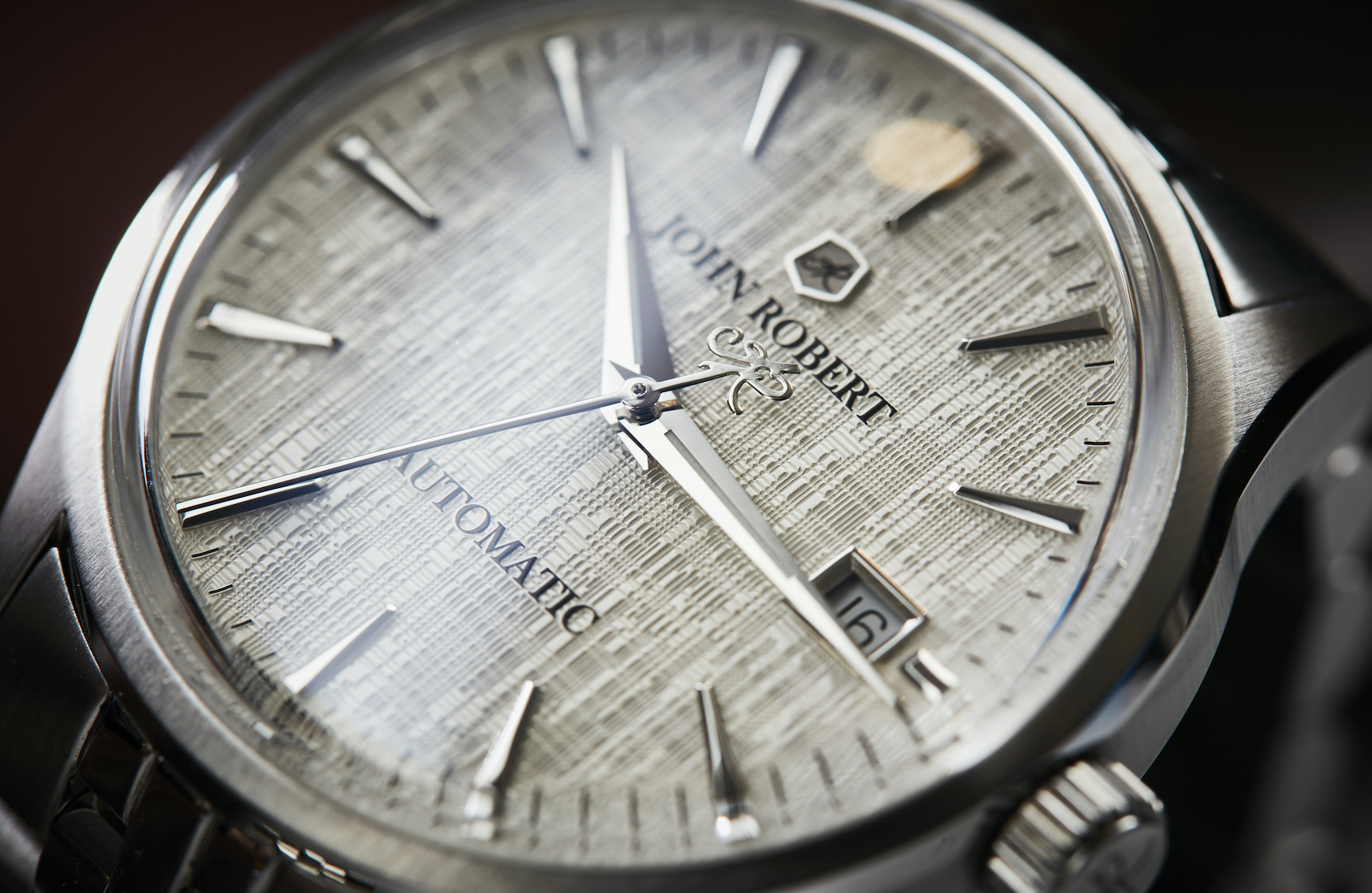 The dials of the John Robert Wristwatches Archetype collection are a real treat, and certainly a step above what you might expect to see on Kickstarter in 2021. They are inspired by the texture-rich linen dials of the past and look faithful to that material from afar, while taking on a much more geometric pattern the closer you look. 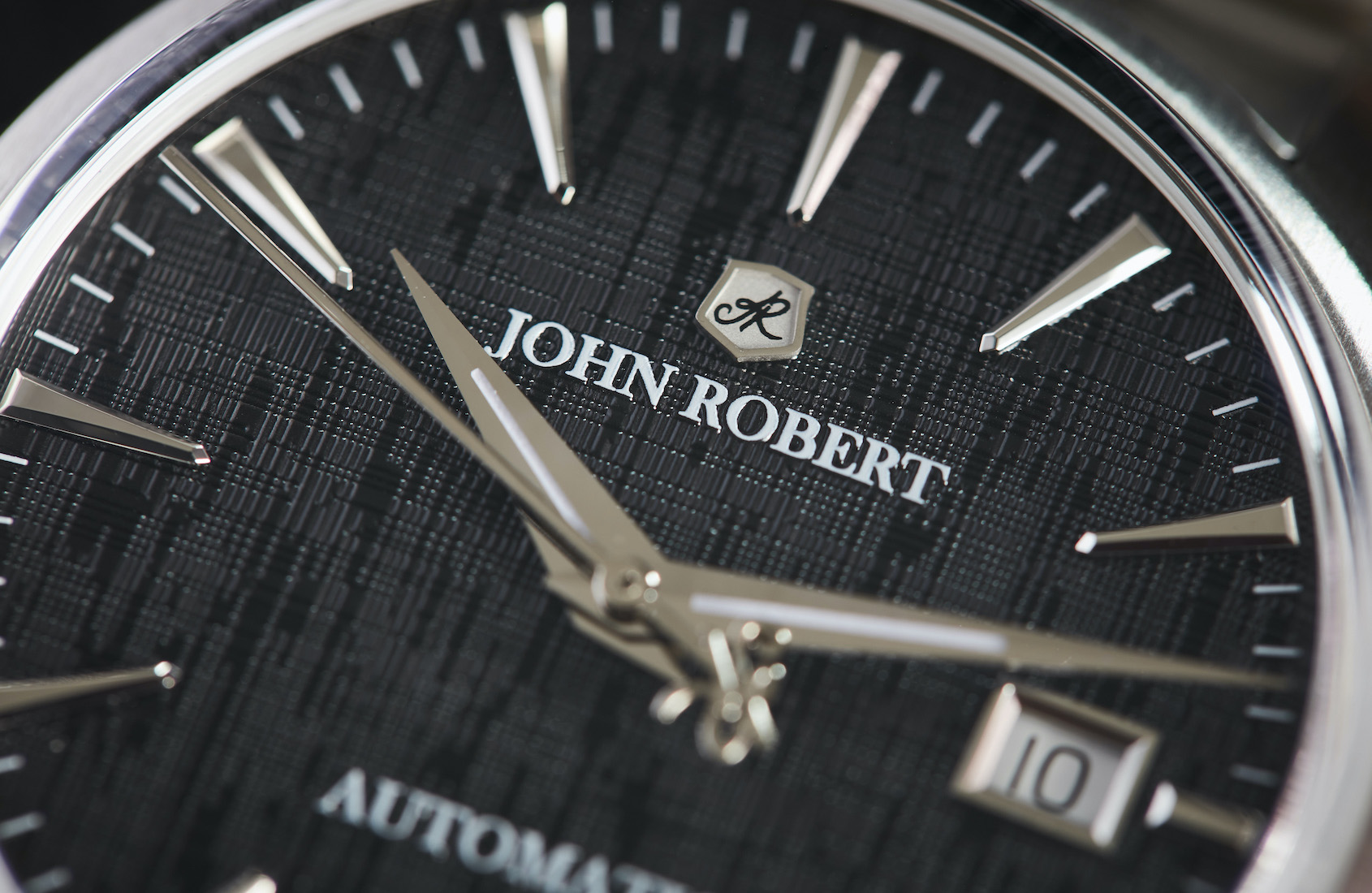 The founder John Barclay actually hand drew the pattern on paper, before it was converted to a format that could be pressed into the brass baseplate of the dial. 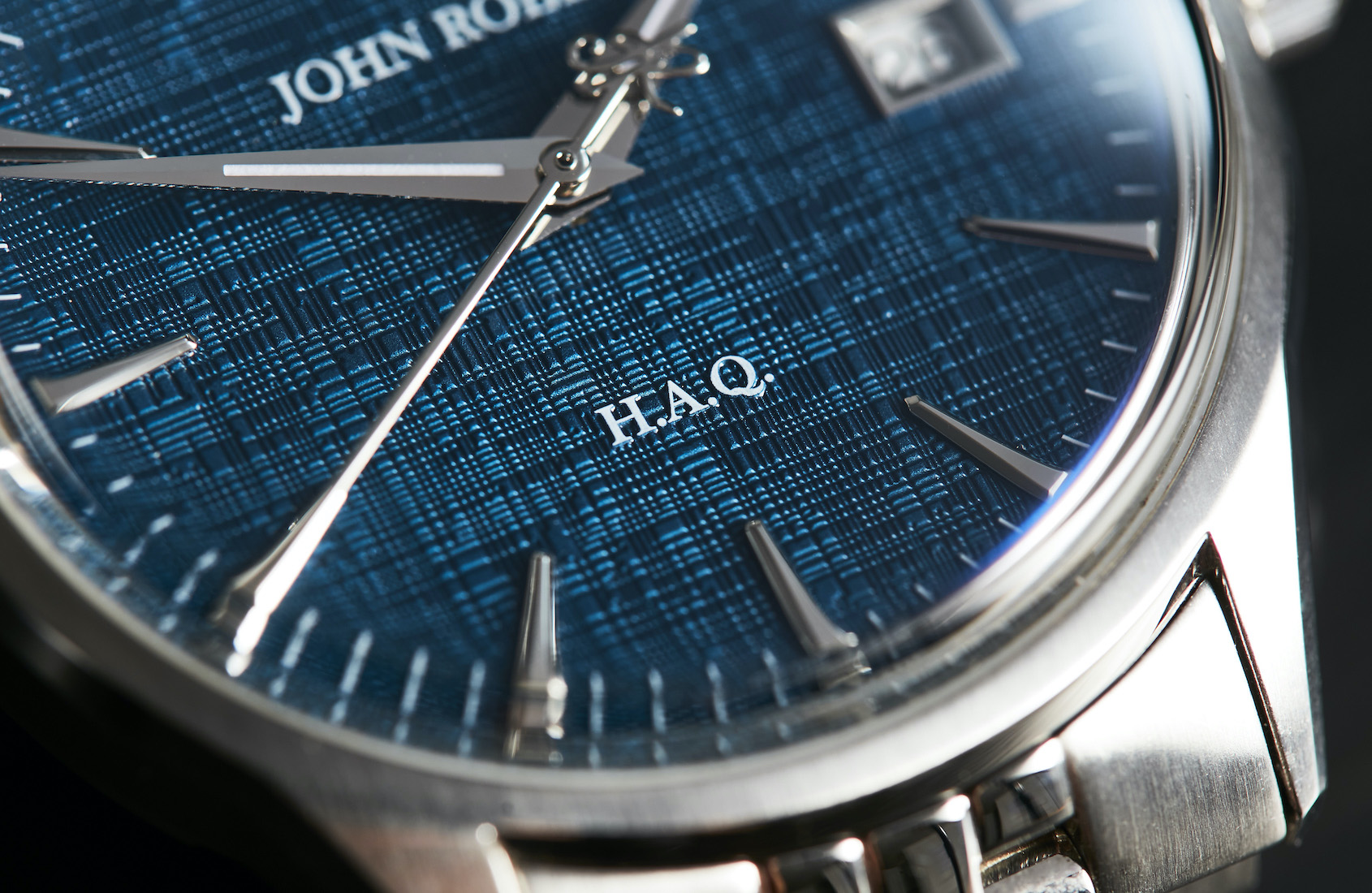 It’s a great example of both the passion and the attention to detail that John has poured into the design of these watches, deeply considering parts of the watch that are unlikely to ever be noticed at a glance. 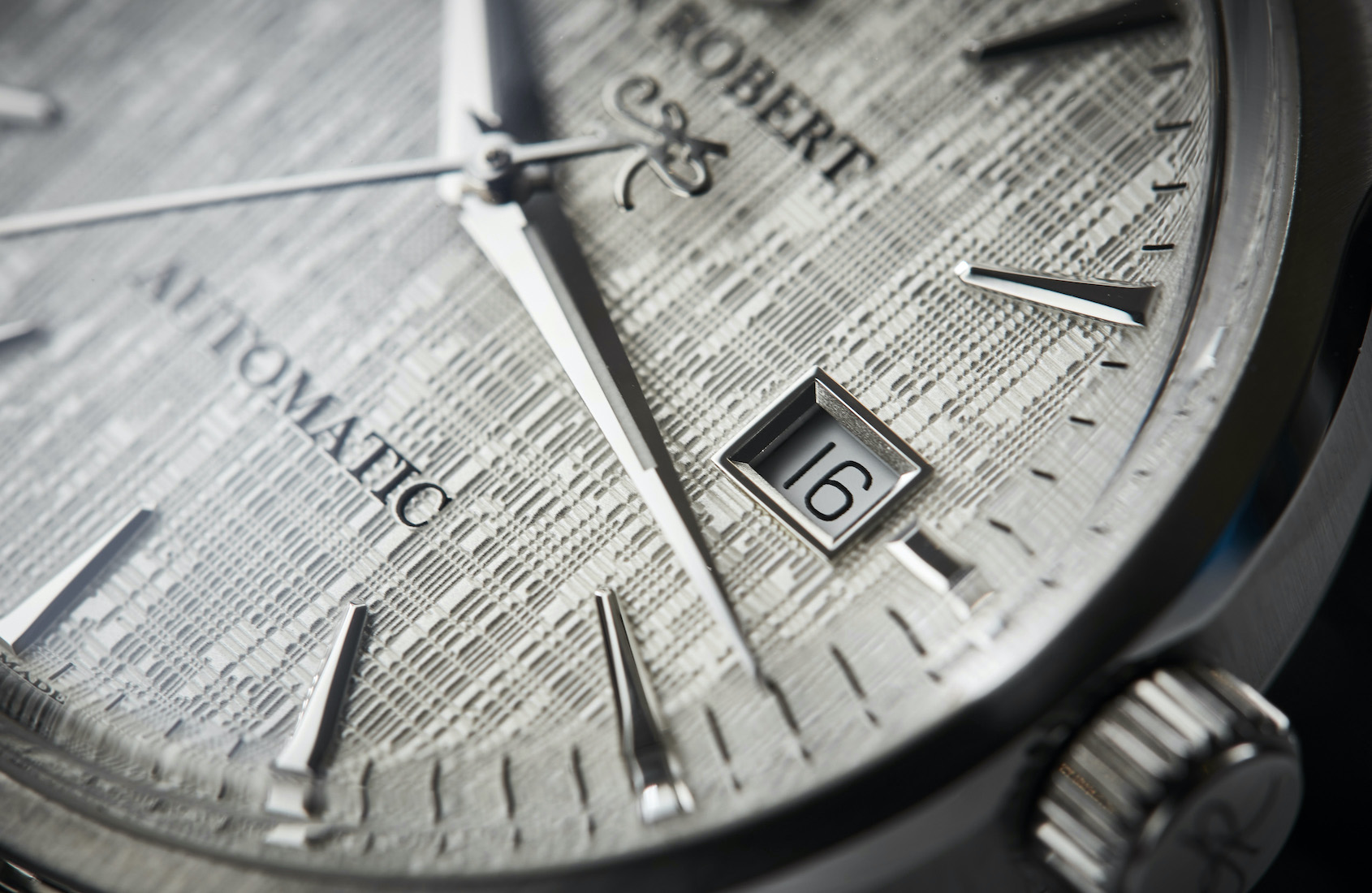 The dauphine hands cut a sharp profile against the dial and work well with the applied pointed hour markers. The only other furniture to be seen is the applied frame of the date aperture and the applied logo at 12 o’clock. 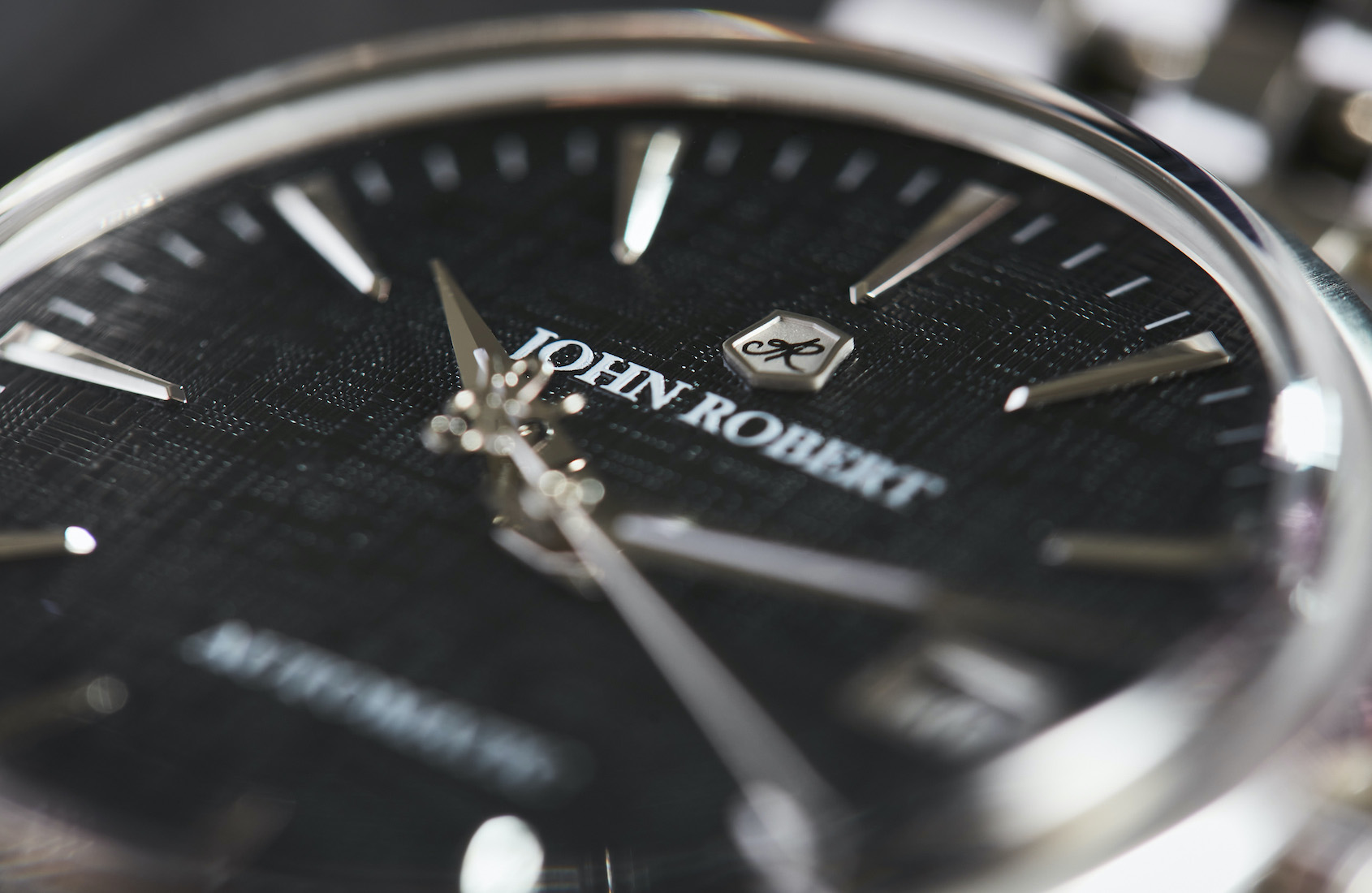 The printed name at the top of the dial and the movement type at the bottom are configured to avoid adding visual clutter and balance each other out nicely. 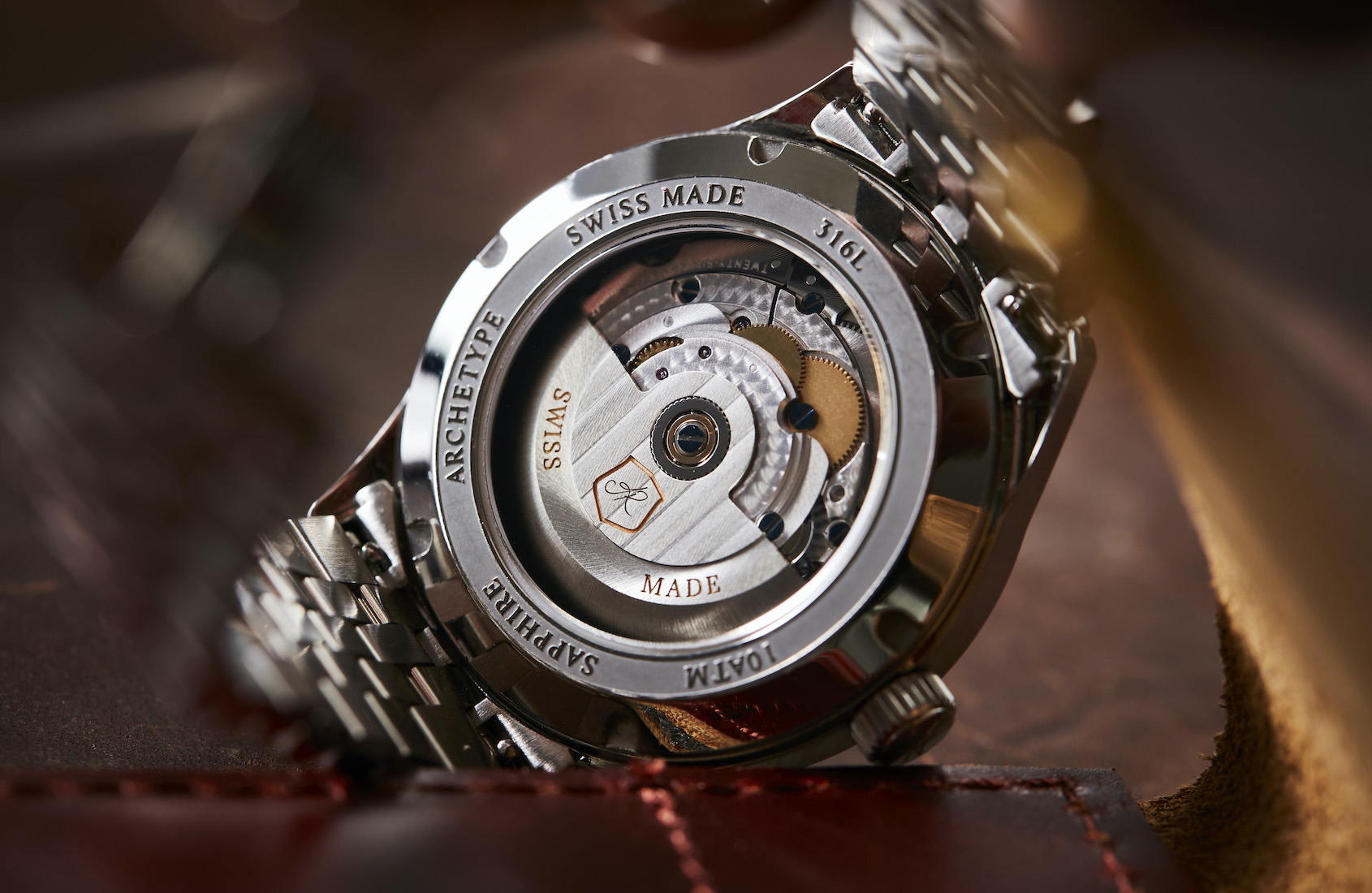 The automatic movement within the John Robert Wristwatches Archetype collection is the everyman Sellita SW200. Swiss-made, simple to service and affordable, the Sellita SW200 is a triple threat that makes a lot of sense for a brand at the beginning of their journey. 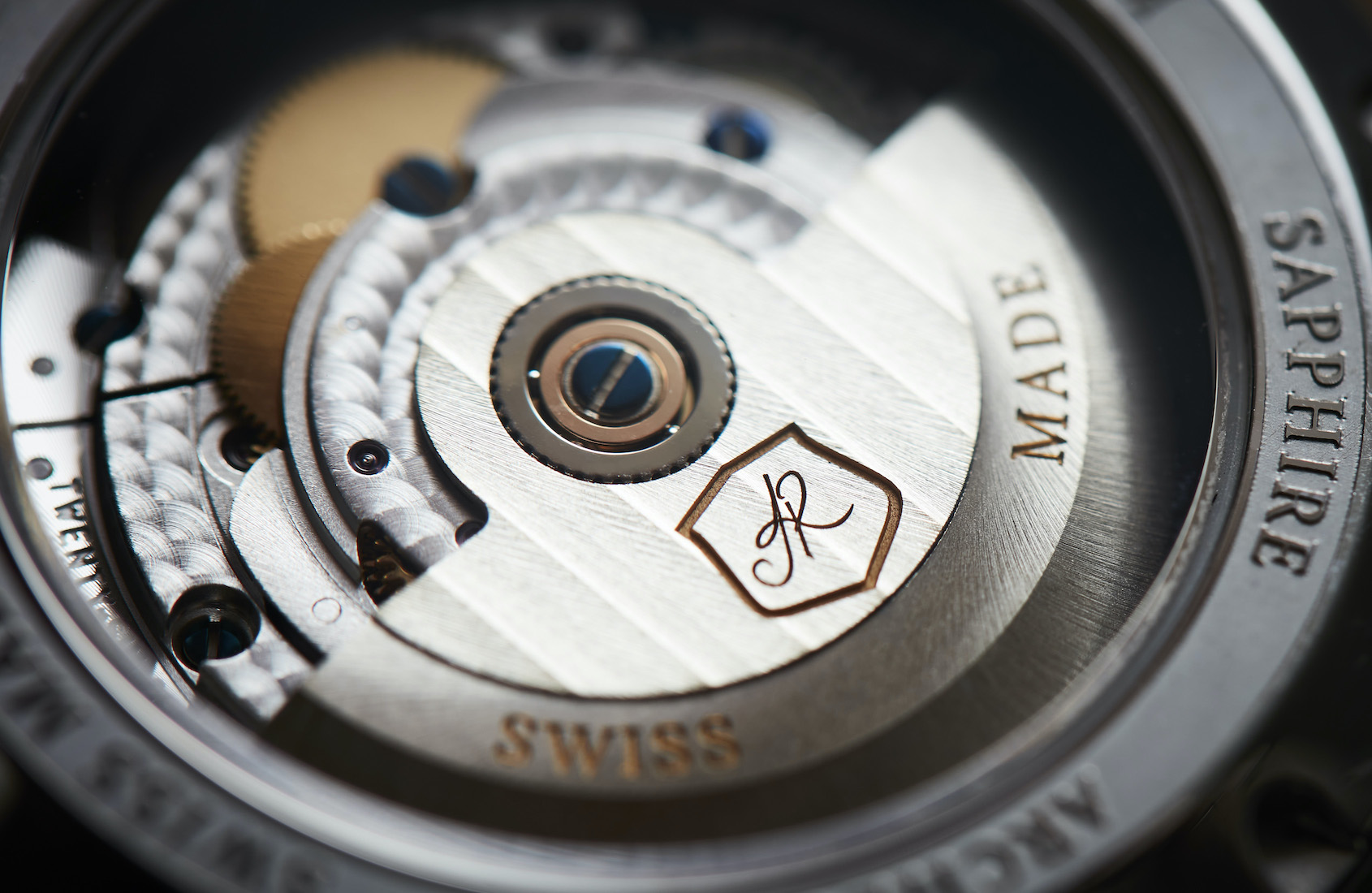 Complete with Côtes de Gèneve, blued screws, perlage and rhodium plating, it’s an attractive movement that deserves the exhibition caseback that it can show off through. 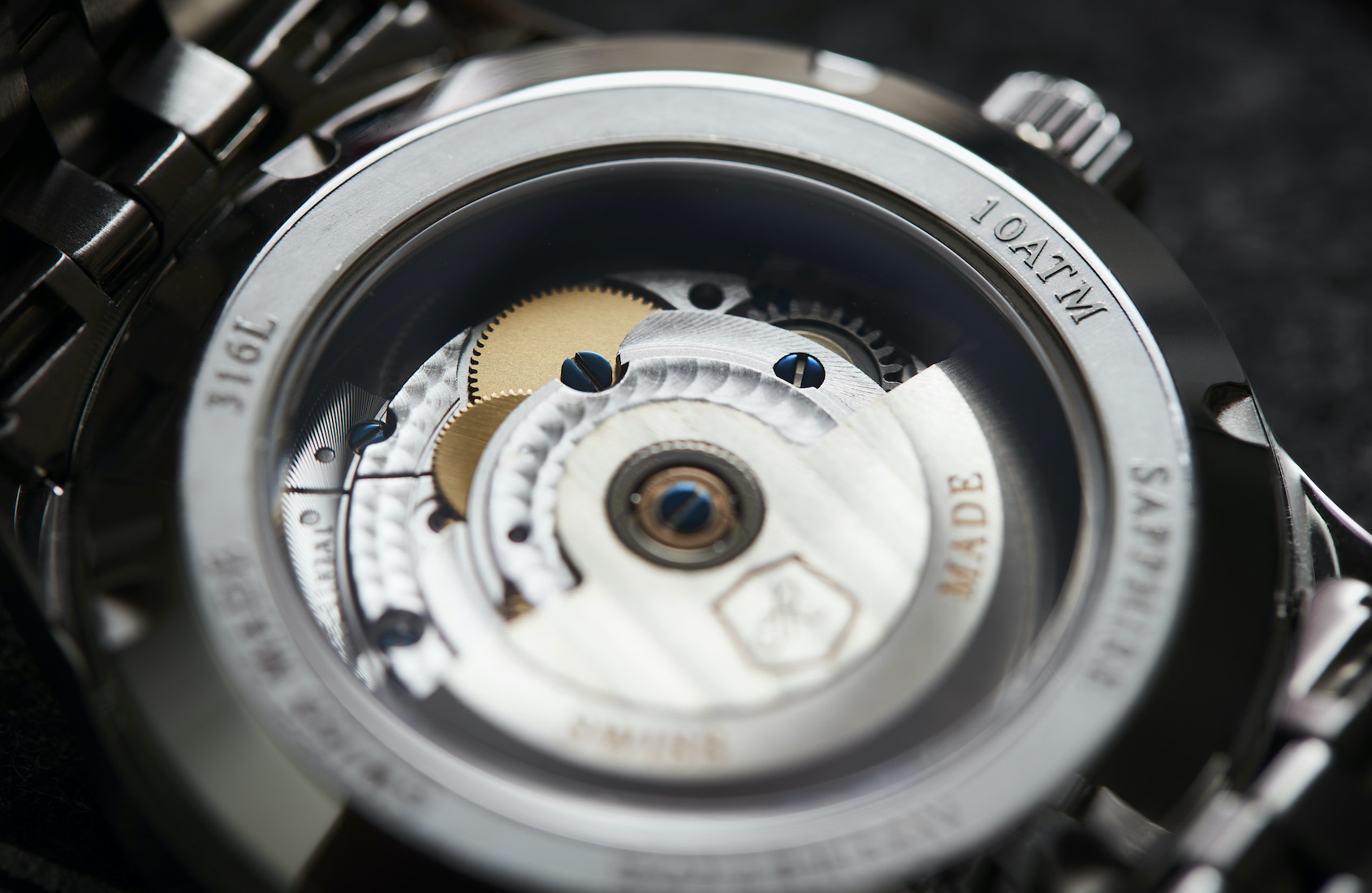 What is arguably more exciting is the caliber within the HAQ references, the ETA E64.111. This isn’t just your everyday quartz movement that’s accurate to within about 15 seconds per month.  Instead it features a thermo-compensating regulator that corrects against changes in temperature, a factor that significantly impacts the accuracy of all quartz watches. 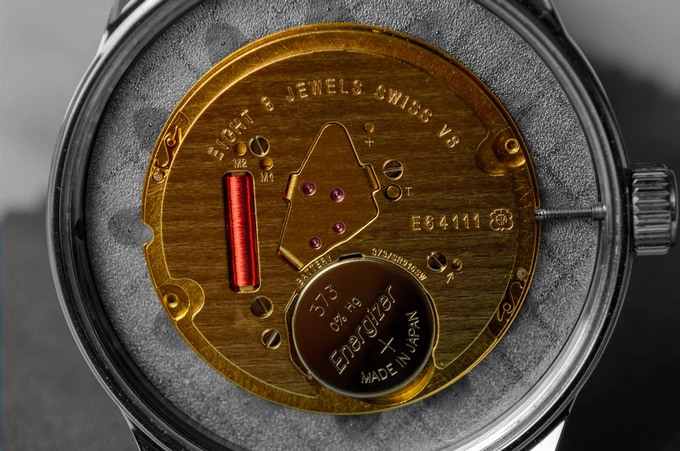 The bracelet and straps 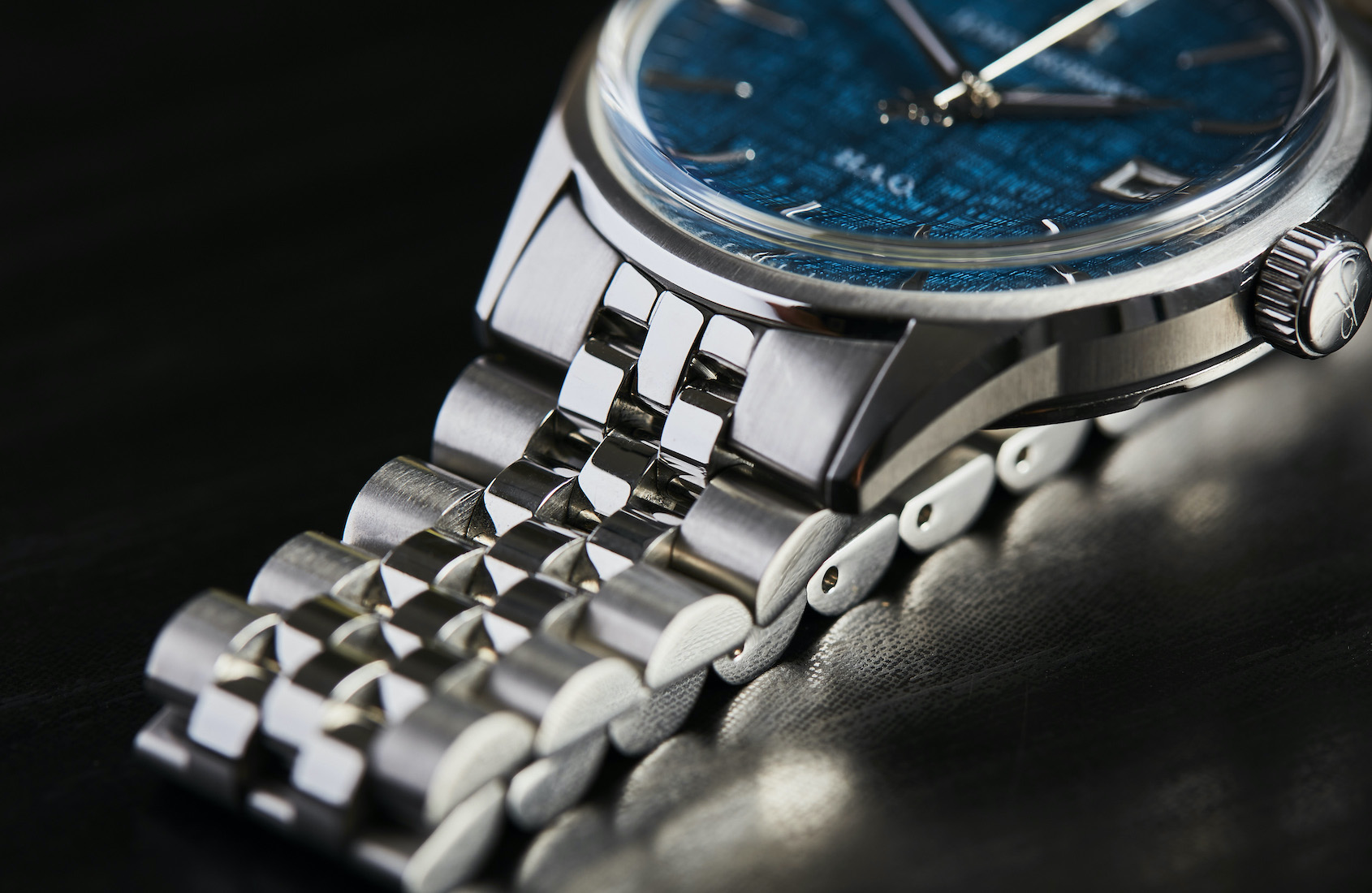 A good test of the quality of any watch is in the bracelet, especially as it is the tactile part of the watch that you will interact with the most. 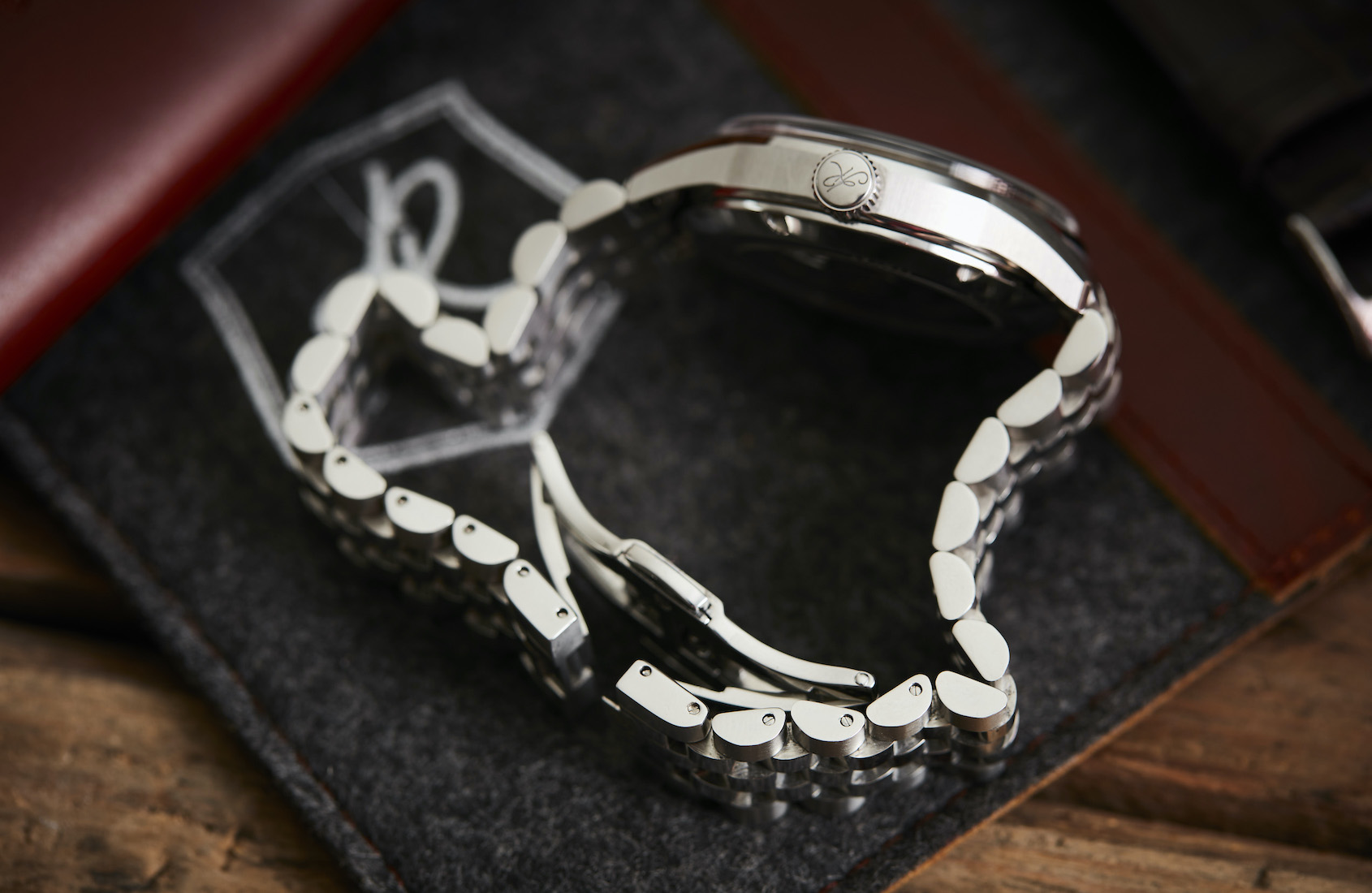 The John Robert Wristwatches Archetype collection are available on a five D-link solid stainless steel bracelet that feature a blend of brushed and polished finishings, and are supremely comfortable on the wrist. 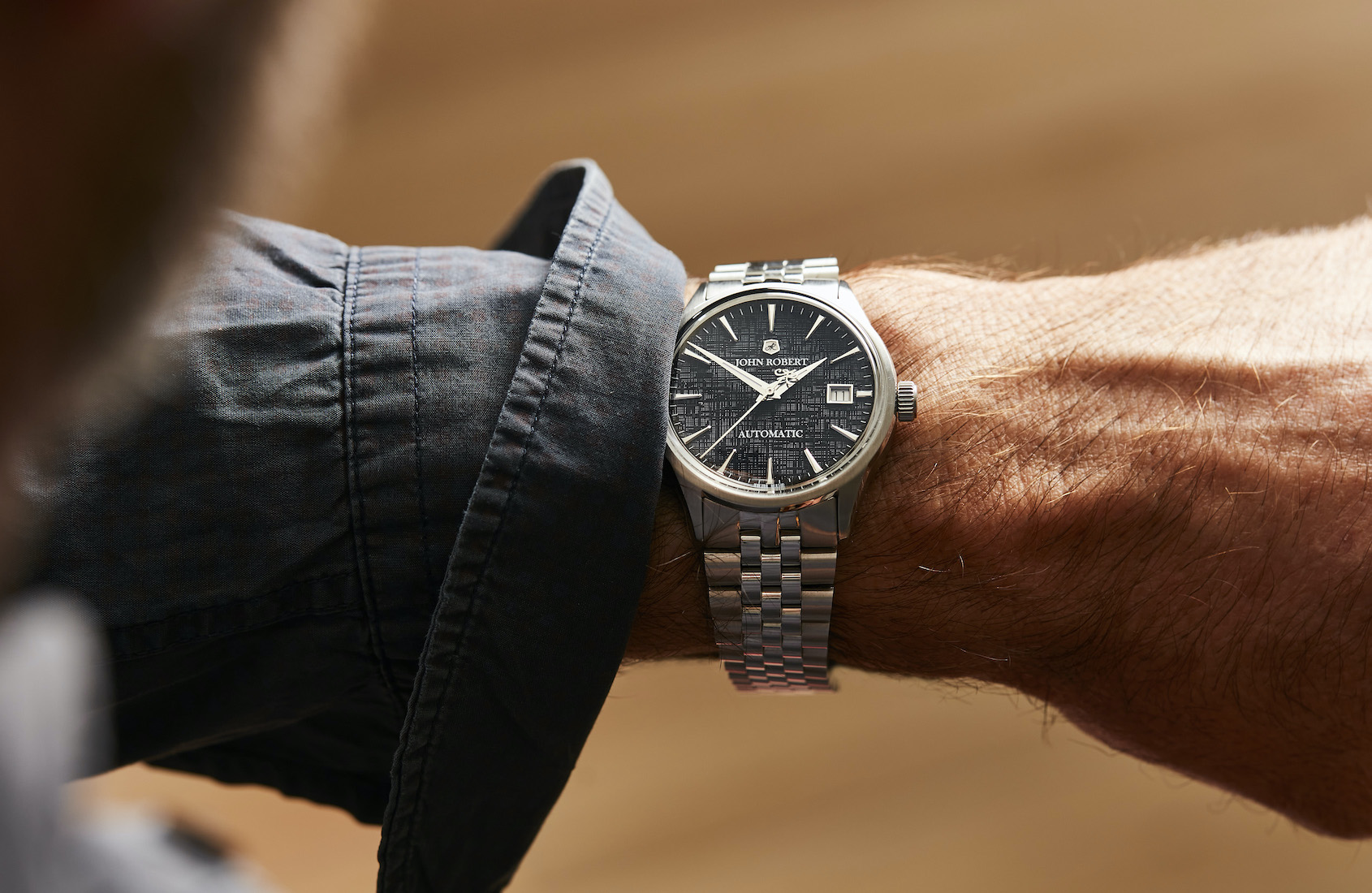 The bracelet tapers slightly toward the invisible double-fold butterfly clasp, which add a feeling of refinement that goes a long way to how much you actually like wearing the watch. The clasp is operated via a secure twin button system, and features a subtle JR logo that is visible when closed. 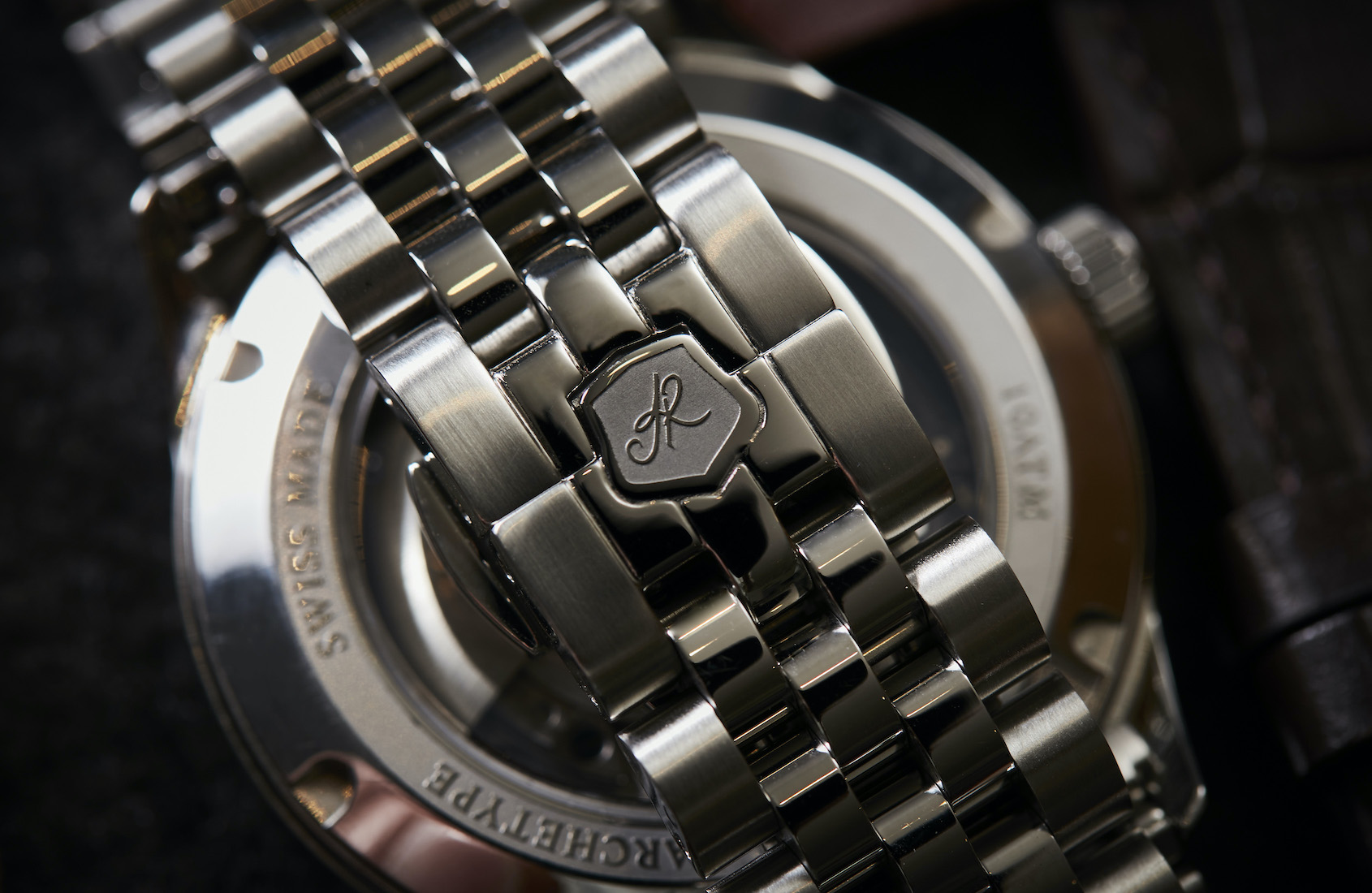 There is also the option of a leather strap, which is a good alternative if you’re looking to dress the watch up a little more. 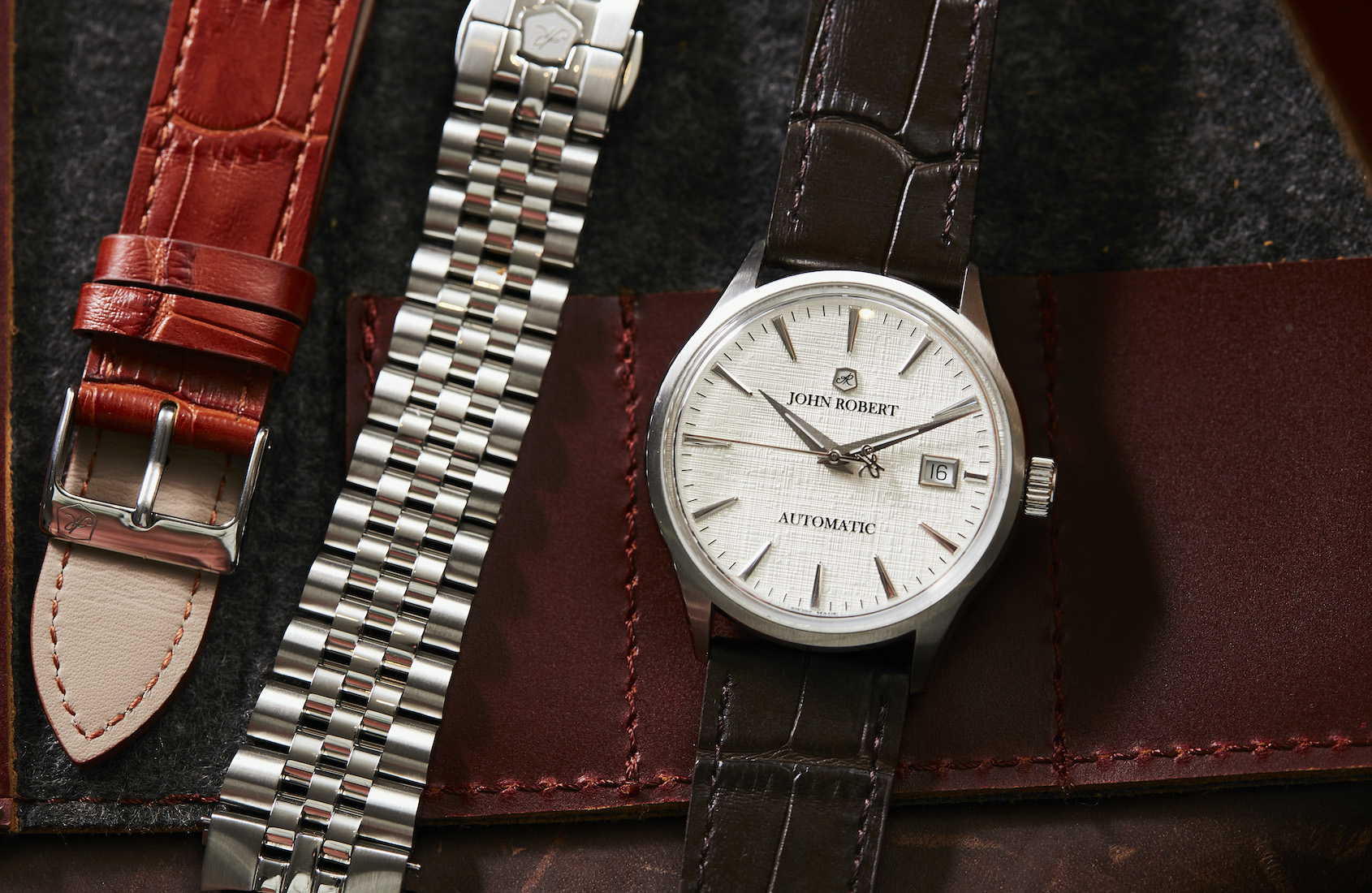 Both the bracelet and leather straps are able to be changed without tools thanks to a quick-change mechanism, which is another well-considered detail that only makes the watch more user-friendly. 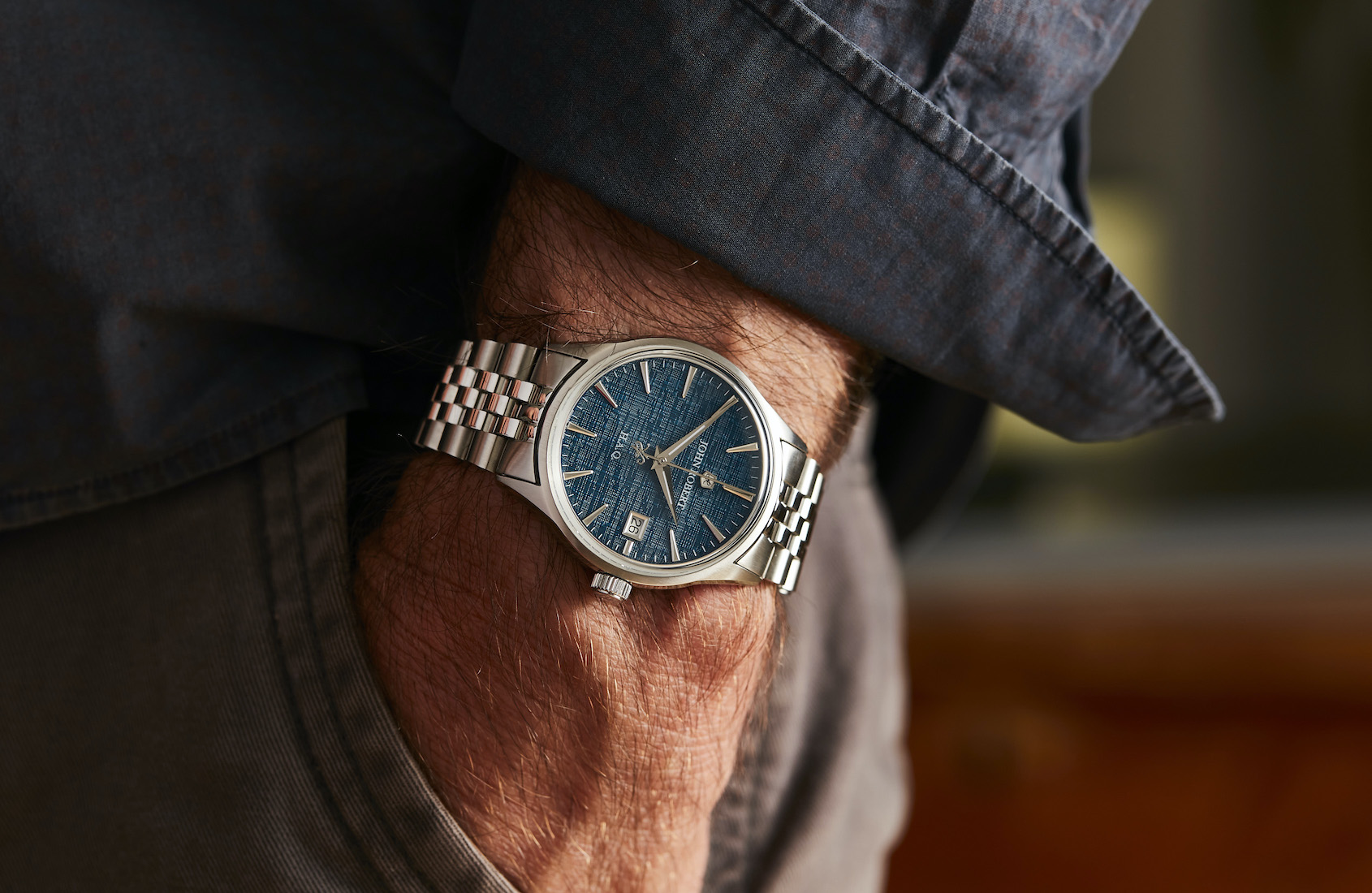 All considered, there is an awful lot to like about the John Robert Wristwatches Archetype collection. The fact that it is the debut collection makes it particularly impressive with clear evidence of every detail being carefully thought out. 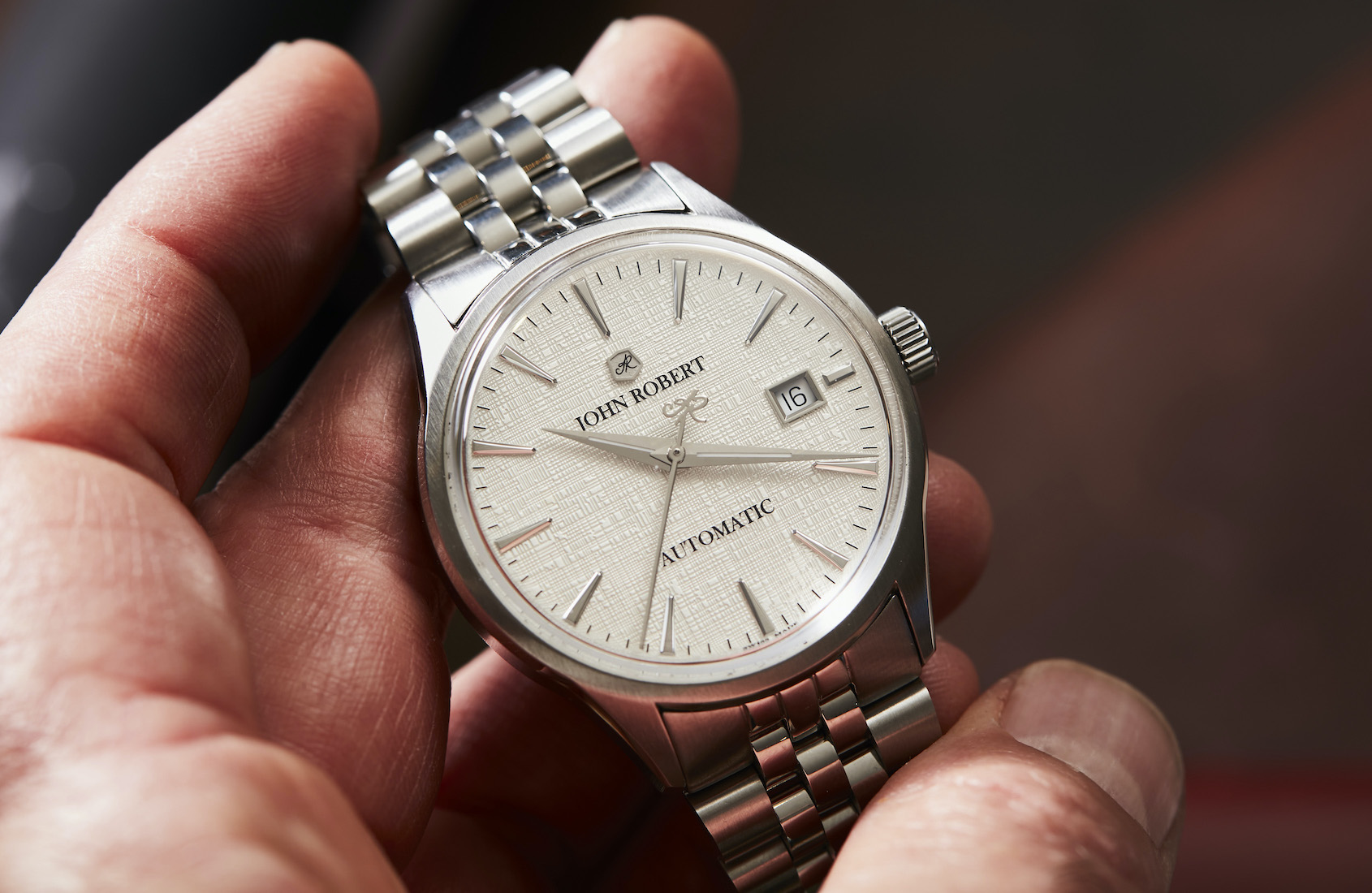 The mid-century inspiration is faithfully executed where it matters and forgotten in the features where it doesn’t, and put together with an attractive vintage case size and a thoroughly practical 100m of water resistance. There is broad scope for tweaks here and there, such as a no-date variant, and different dial tones or textures, but this watch does exactly what it says on the tin. If this is the archetype of the brand, it’ll be exciting to watch what the future holds for John Robert Wristwatches. 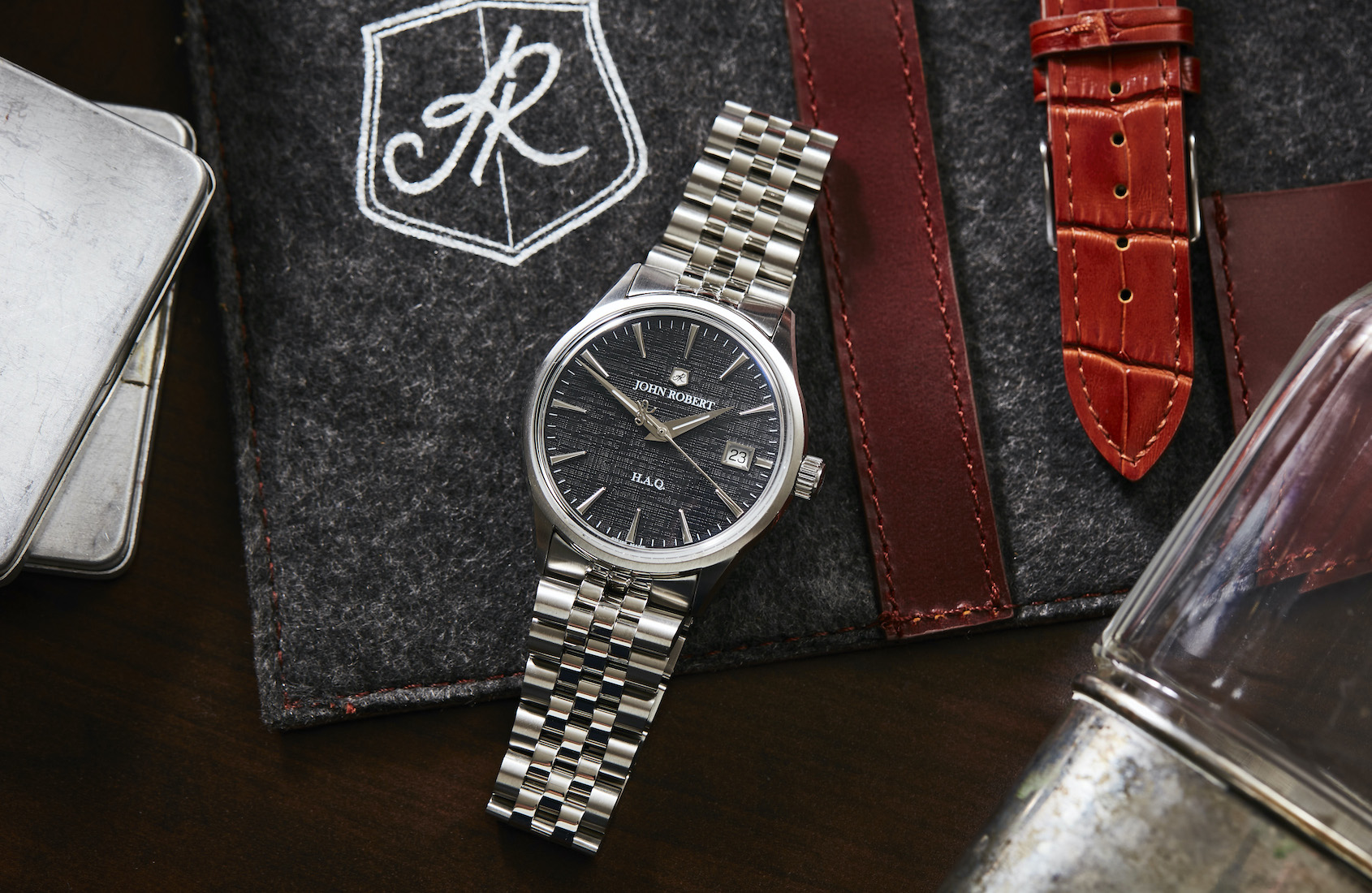 The John Robert Wristwatches Archetype Automatic starts at US$979 and is available for US$789 during the 30-day Kickstarter pre-order.

The John Robert Wristwatches Archetype HAQ starts at US$489 and is available for US$389 during the 30-day Kickstarter pre-order.

Made in partnership with John Robert Wristwatches. However, the opinions expressed in this article are our own in accordance with our Editorial Policy.