MICRO MONDAYS: The Galvin Watch Company Loimu is a funky-dialled sporty watch at a great price

Galvin Watch Company, a notable Kickstarter success, present their newest creation: the Loimu collection. Affordably priced and with a high-beat Japanese automatic movement, the release shapes up as a left-field choice for a great everyday watch. 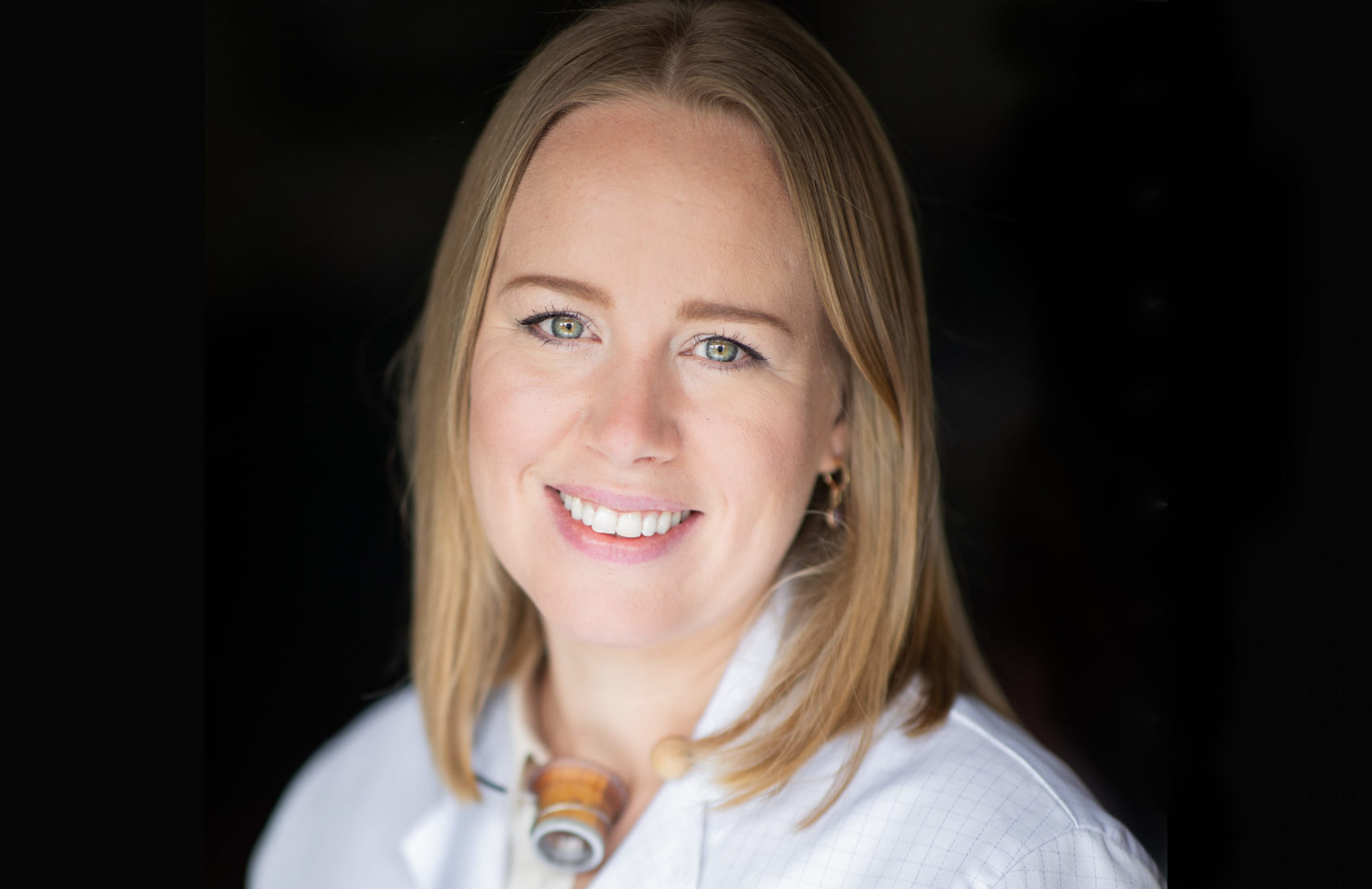 After gaining noteworthy industry experience working for TAG Heuer and Omega, Finnish watchmaker Susan Galvin who’s now based in Sydney, started Galvin Watch Company via Kickstarter.  First up came the Alku Collection, which we reported on in 2020, in which she personally inspected each watch before it was sent to its new custodian.

With the Loimu pieces, GWC hope to expand on the success of the dressy Alku, drawing inspiration from Nordic landscapes and the whirling aurora borealis.

Greens, blues, and purples shoot across the winter skies as charged particles of the solar wind collide with the Earth’s atmosphere. The colours of the northern lights make their way onto the dials of the Loimu collection. Available in black, ice blue, purple, lime green, silver and dark blue, the dial colours are all paired with chilly names.

The intricate sunray guilloche is more apparent on some than others, and really speaks to the watchmaking roots of the brand’s founder. Extra-expressive in the fresh Polar colourway, the blazing waves break against a radially brushed ring containing the lume plots. This leads into a tall chapter ring that gives plenty of depth to the Loimu, playing nicely with the flat sapphire crystal featuring AR coating.

Dark, polished numerals at 6,9 and 12 o’clock are matched by sharp lance hands, their lume plots changing hue slightly depending on the colour of the dial. A gorgeous logo above the pinion marries a polished outline and script “G” against a background matching the dial colour. It’s a great way to incorporate a non-derivative logo in a restrained fashion, without taking away from the dial design. Otherwise completely devoid of text, the dial is balanced save for the framed date window at 3 o’clock.

Loimu is sporty, yet compact on the wrist 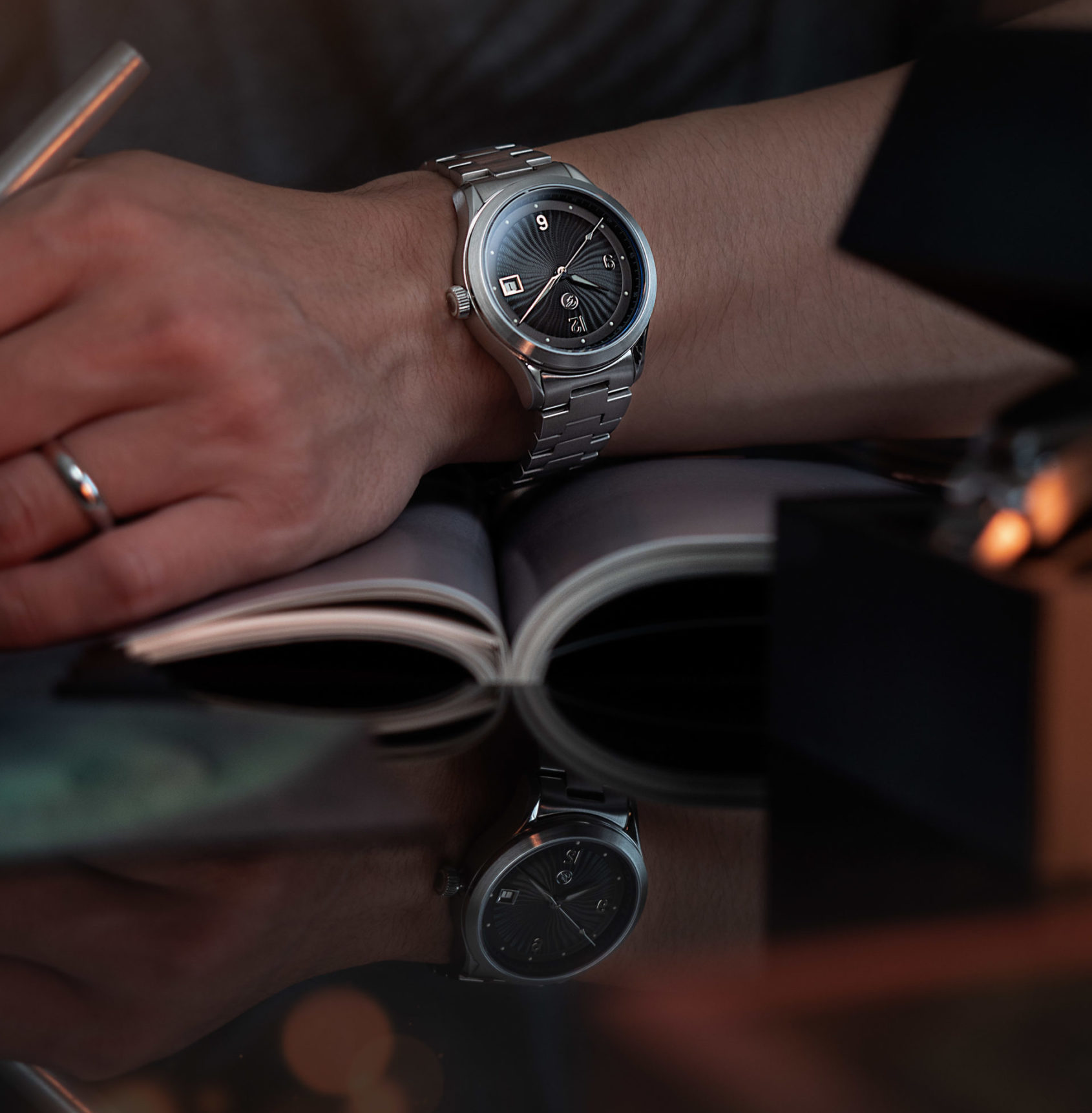 With fine brushing rounding out the sides of this 38mm case, polishing is used to highlight its minimal features, mainly the vertical edge of the bezel leading to the top of the twisted lugs. The short 45mm lug-to-lug will make this a breeze on most wrists, with dimensions similar to a Seiko Alpinist. Completing the dimensions is the 19mm lug width, adhering to the 2:1 ratio of case diameter to lug width, but limiting aftermarket strap options. 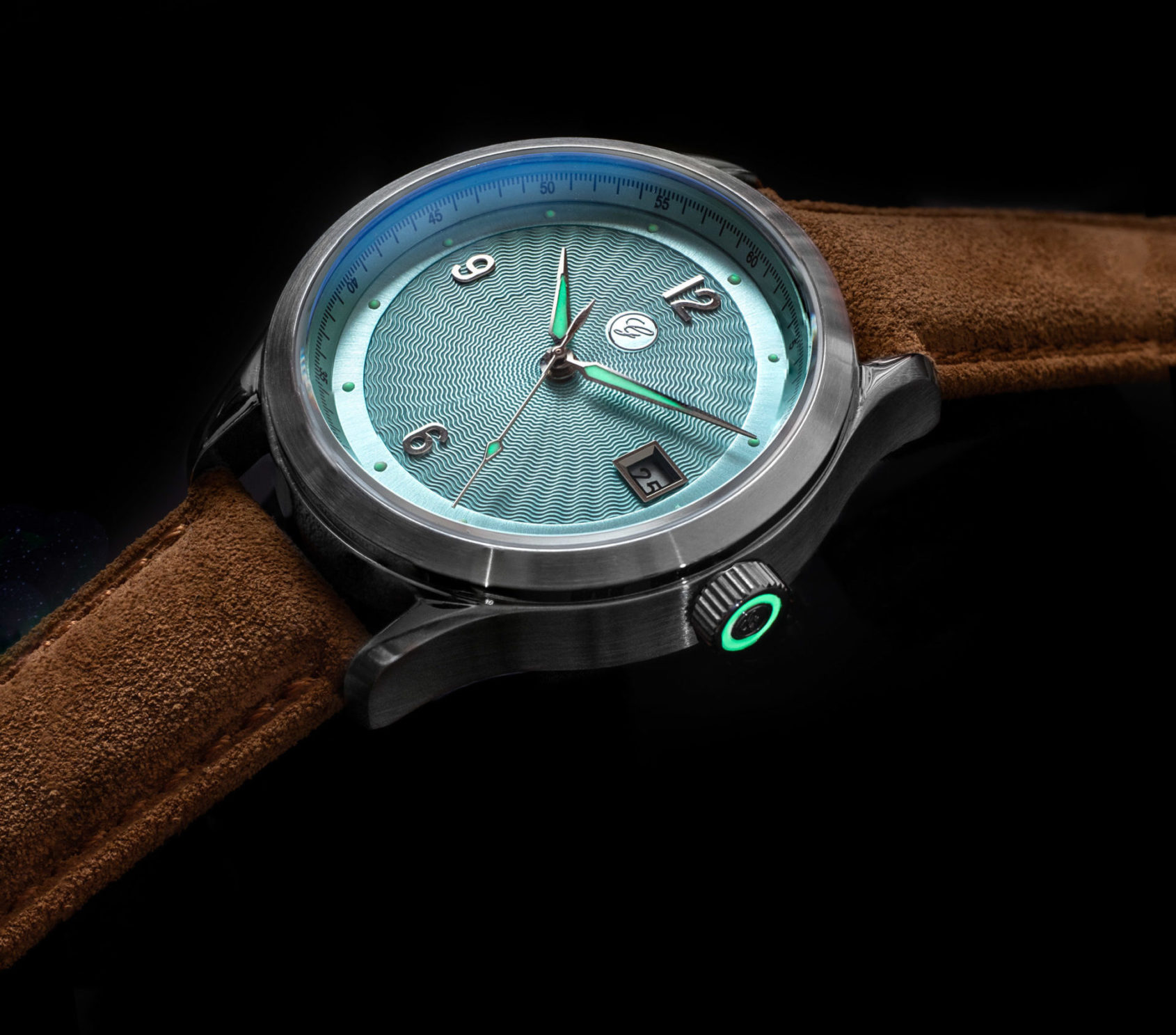 The crown is similarly uncomplicated at first glance, with noticeable knurling for extra grip and a complimentary water resistance of 100 metres. A white lume-filled ring surrounding the GWC ‘G’ logo is a nice oddity and sets this watch further apart from its “big” brand competitors. Flipping the watch over, we’re met by a mirrored machined wave finish adorning the caseback, the “G” being in focus once again, completing the 11.6mm height of the Loimu. I’m not upset about the choice of closed caseback, as the budget for any movement finishing at this low price point is better used elsewhere. 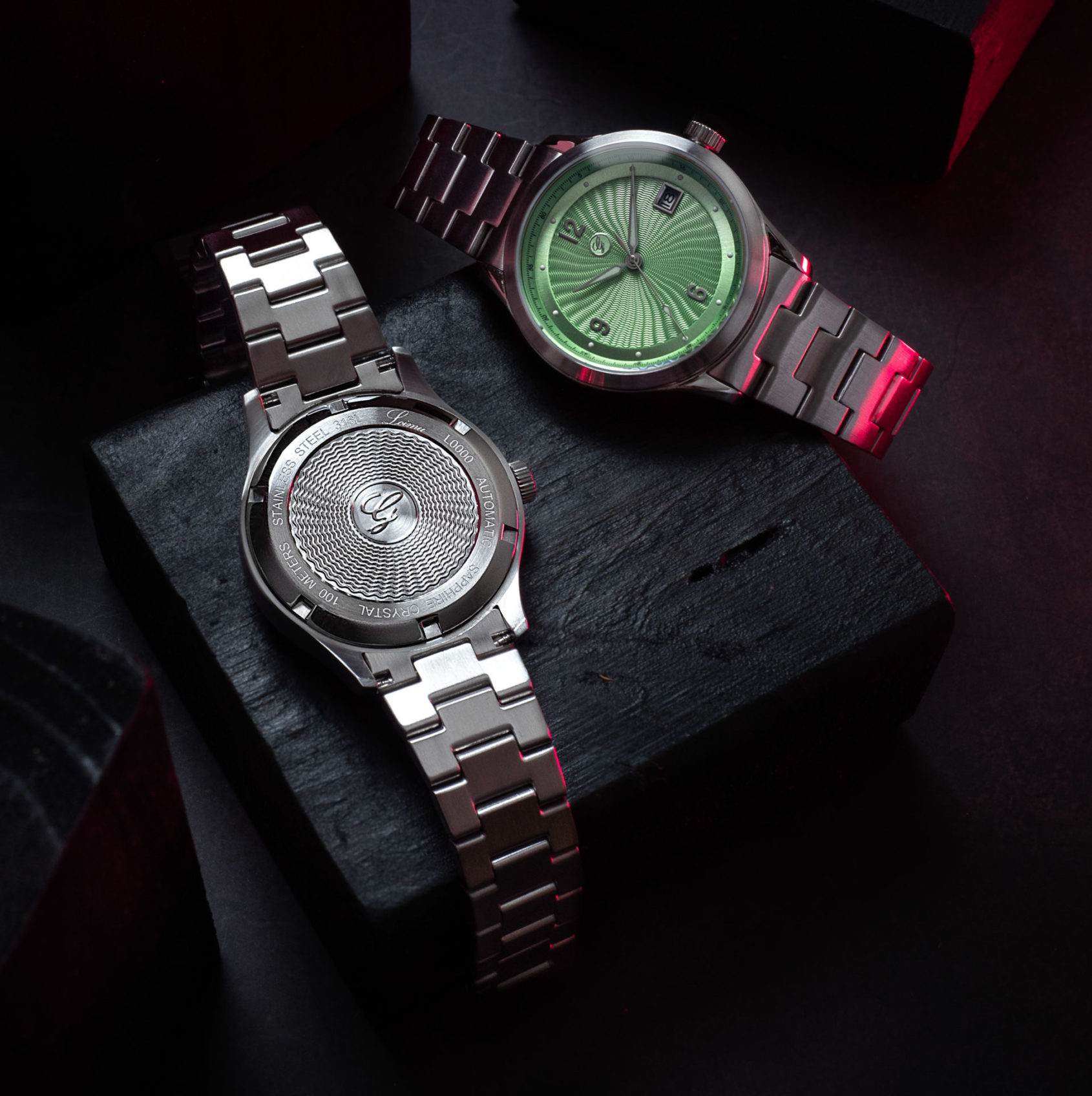 To secure it onto your wrist, the GWC Loimu is offered on a single-link, brushed, stainless-steel bracelet that matches the prominent watch finish nicely, though due to the polished tops of the lugs can appear at odds with the case. A split-pin system is used to adjust the bracelet, which doesn’t feature any half links, with only two micro-adjust positions on the clasp. Nevertheless, the clasp itself is small and unobtrusive, which pairs well with the smaller diameter of the Loimu. Milled in its construction with push-button operation, it completes the quartet of “G” script logos with its laser engraving.

Microbrands, pay attention, this is the way to go 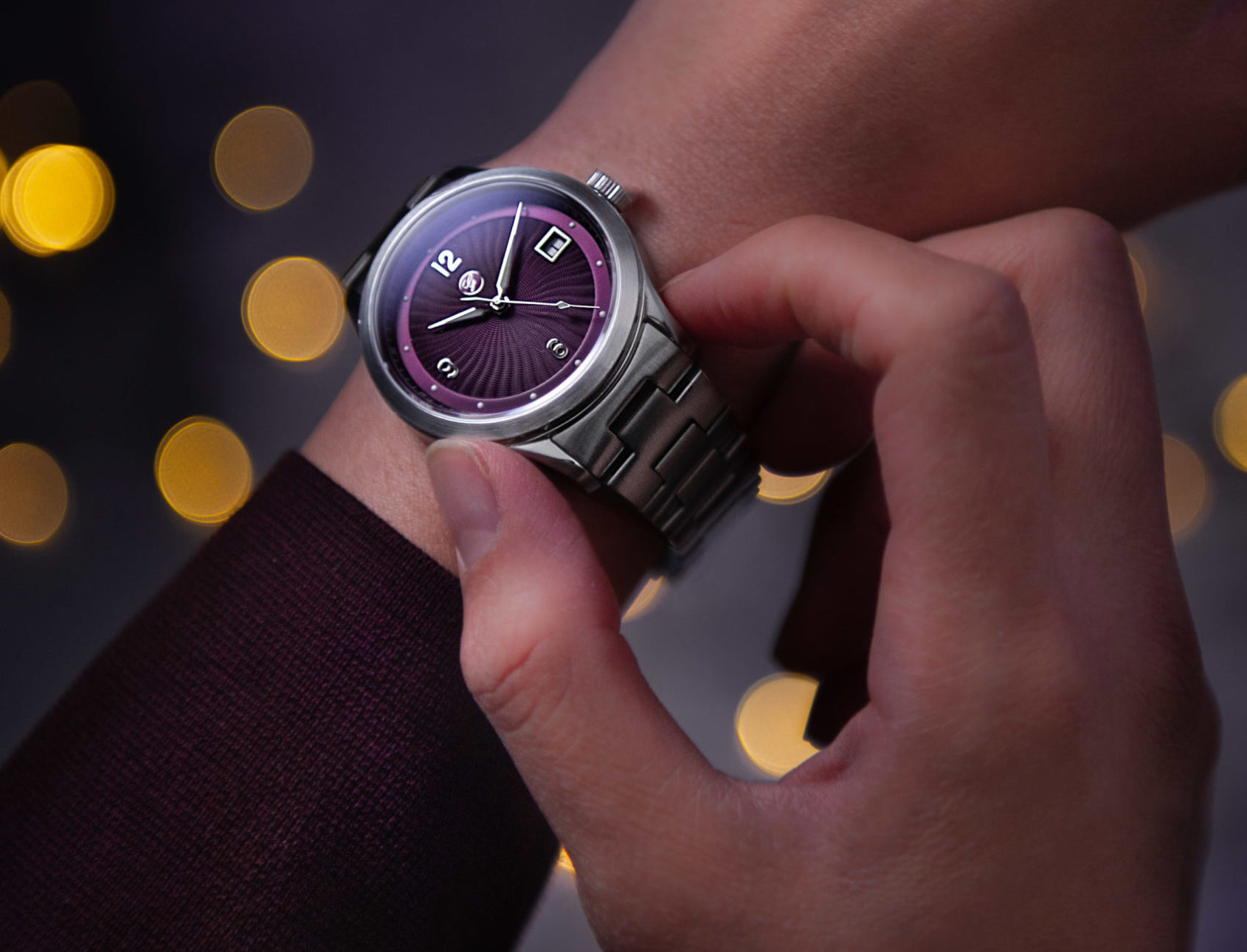 With a smooth eight-ticks per second and only 3.9mm thin, the Miyota 9000-series has seen far more use in the microbrand world since the prices of Seiko’s NH35 variants started to slowly creep up, and rightfully so. Spec-for-spec, it’s on par with ETA’s evergreen 2824, rivalling the higher grade 2892 in thickness. Normally, it’s accuracy range falls within -10 to +30 seconds per day which is perfectly acceptable, but Galvin Watch Company claims that Susan will aim to regulate each Loimu to within 10 seconds per day. That’s a commendable effort and serves as a reminder that microbrands are not to be scoffed at.

I would love for the Loimu to slim down for its next iteration, as the Miyota within will certainly allow it, which would make it more compelling as a great all-rounder. 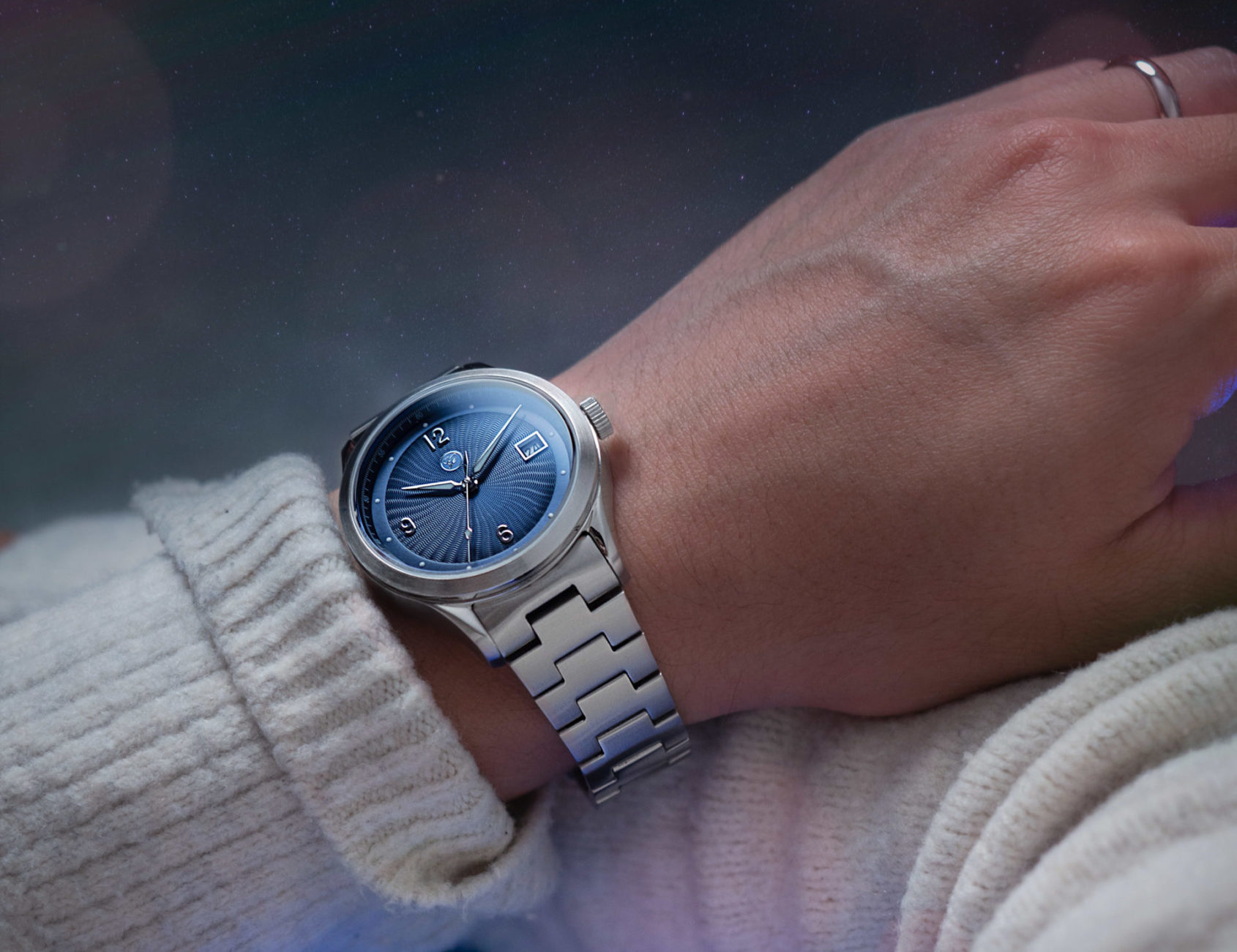 In danger of sounding car salesman-like, this bad boy is a great pick if you’re in the market for a funky-dialled sporty watch with a great movement at a fair price. I’ve been keeping you in the proverbial dark regarding the pricing for the Loimu, though I did make references to its affordability. Being a Kickstarter campaign (an already fully funded one by the way) comes with perks. At the time of writing, the AU$349 Super, Super Early Bird and AU$399 Super Early Bird offers have been sold out, leaving the AU$449 the least dear option.

Once the Kickstarter perks are exhausted and/or the Loimu goes on regular sale, it’ll be priced at AU$679. While I still see it being a success at that price, it will be a new level of competition where the Loimu no longer punches way above its weight, encountering some meaner opposition.

To Susan Galvin and her team, hats off for delivering an exciting novelty from an Australian brand.

The GWC Loimu is available now as part of a Kickstarter campaign. The full RRP is AU$679, check out the Kickstarter to snatch a better deal before it’s gone.