The watches of Michael Jordan, including Ulysse Nardin, Panerai, Rolex and Franck Muller

Michael Jordan is an NBA legend who many consider to be the greatest player of all time, the GOAT, or, if on social media, simply the goat emoji. Jordan won a total of six NBA championships with the Chicago Bulls and is nicknamed “Air Jordan” and “His Airness” for his ability to hang in the air on the way to the basket. Stopping time.

When it comes to timepieces, Jordan has shown an eye for purchasing models that have been less known to the masses at the time. As one commenter on an Instagram thread put it, “When you’re the goat, you don’t have to follow the herd.”

Probably one of the coolest finds of 2020 that I uncovered was Jordan sporting a first generation A. Lange & Söhne Datograph in platinum on matching platinum bracelet back in 2002. The Datograph was a revelation when it was unveiled at Baselworld 1999 and at the time not too many people would have been aware of the brand in the early 2000s. Seeing MJ rocking one in 2002 was definitely eye opening!

At 6ft 6 inches, Michael Jordan is a tall guy and can make a relatively normal sized watch appear to be way smaller than it is. I came across a photo of Jordan sporting a less commonly seen Franck Muller Long Island Perpetual Calendar in 18k yellow gold. With case dimensions of 33x55mm, MJ pulls off the large size watch with ease.

You don’t often spot a Ulysse Nardin on the wrist of a celebrity, let alone two different complicated models! The first model is a Ulysse Nardin Royal Blue Mystery Tourbillon in platinum, with 48 white diamonds and 12 blue ones on the inner chapter ring of the watch. The watch came on a blue leather strap and the other edition was a full blinged-out version, but it seems MJ managed to get a plain factory bracelet made for it. Also note he appears to be rocking Patek Philippe Calatrava cufflinks with his shirt. 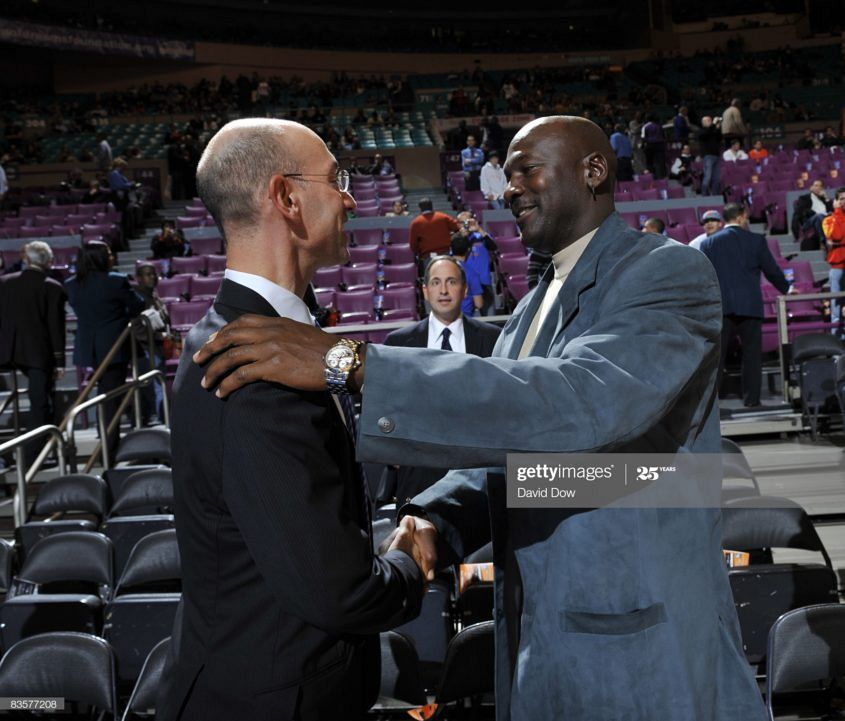 The second model is a Sonata Cathedral, which is a dual time zone watch with an alarm and countdown function, with a cathedral gong. One serious watch that you don’t see every day, again showing that MJ buys timepieces not on the radar of most.

His Airness owns a few timepieces from Panerai. The military-inspired pieces, with their larger case sizes, are a good fit for Jordan. The first is a PAM 172 Luminor Marina with a 44mm case made from Tantalum, which is a rare metal with a blueish-grey hue.

The second Panerai I spotted him with, is a limited-edition PAM 266 Radiomir 8 Days “Cellini” made for Cellini Jewelers. It features a blue dial and a manually wound in-house movement with 8 days of power reserve.

The final Panerai is a PAM 425 Radiomir with a 47mm steel case, which once again looks “normal sized” on Jordan’s wrist. The dial of this PAM is different to others, as it has a dot and lines for the hour markers. It is manually wound and has 3 days of power reserve.

A lot of modern NBA players have Audemars Piguet Royal Oaks in various guises. After all, it is such an iconic watch in horology. In the case of Michael Jordan, he chose a less known model from the AP collection, the Millenary. This has always been a polarising model, with its rounder case and dial. It fits MJ very nicely.

A classic Cartier Tank or Santos in their XL sizes still would look a little small for Michael Jordan, so he opted for the 42mm Ballon Bleu in white gold and matching bracelet with a diamond bezel and a white dial with Roman numerals.

Michael Jordan didn’t choose a regular steel GMT-Master II, instead he opted for the 18k yellow gold model with factory bezel consisting of diamonds and sapphires and with diamonds in the lugs.