Collaborations, no matter the context, are fraught with the potential of being, more often than not a curious reduction in the individual talents involved. Instead of following the apparent logic that it may be ‘twice as good’ as the individual party’s work, it’s commonly quite the opposite. Half as good, if that. And consequently, neither party wins. Allow me to present “Cruisin’” by Huey Lewis & Gwyneth Paltrow as Item A for the prosecution.

Sometimes, though, against the odds, two parties can come together and the effect is not a doubling, or a redoubling of the artistic life forces, but an exponential fireworks display of magic. That’s how I’d describe indie watchmaking juggernauts H. Moser & Cie. and MB&F helmsmen Edouard Meylan and Maximilian Büsser’s H. Moser x MB&F Endeavour Cylindrical Tourbillon and MB&F x H. Moser LM101. 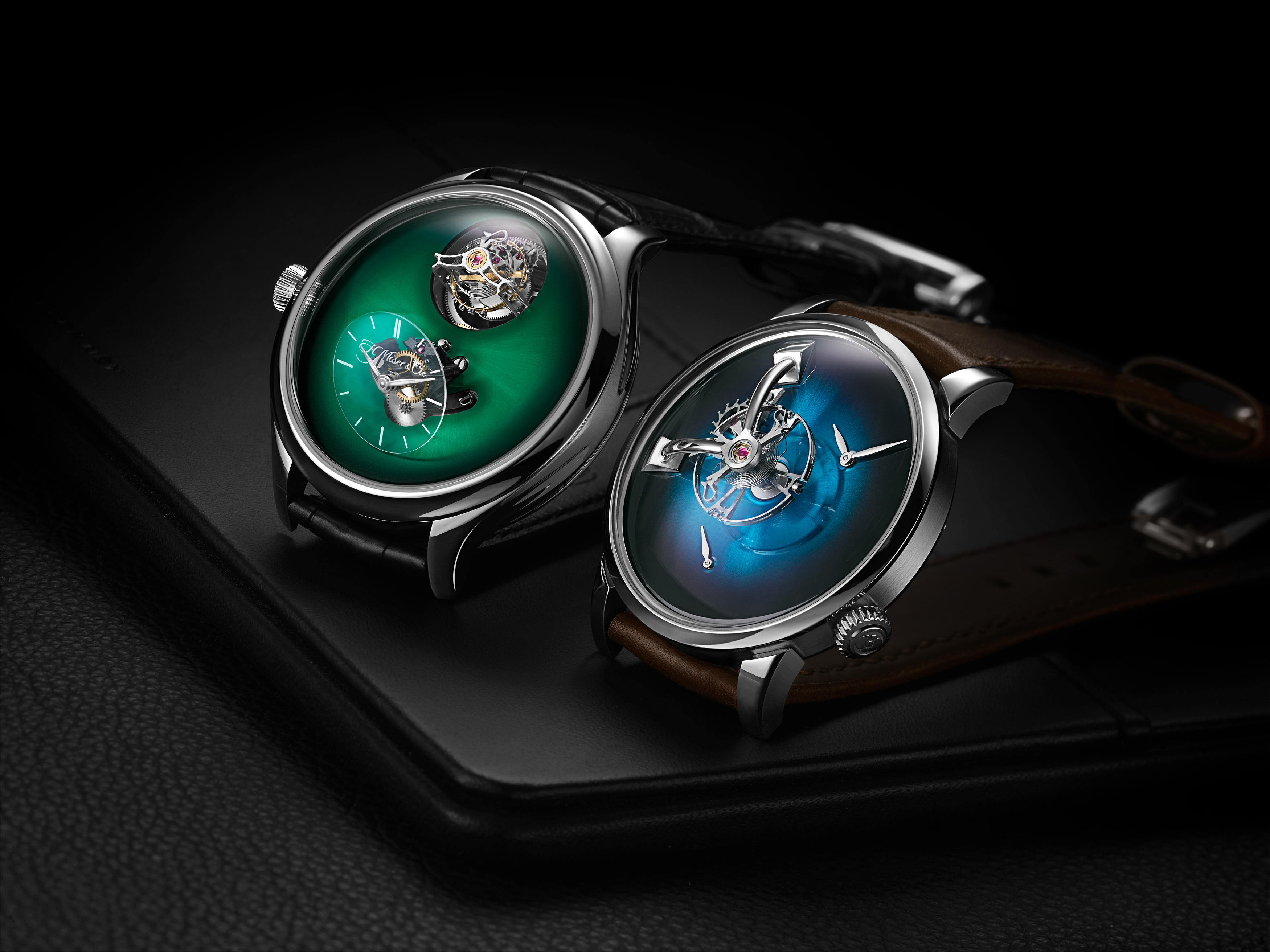 How did this creative joint venture come about? Well, as Büsser explains, “When I called Edouard to tell him that I wanted to collaborate on a creation, I mentioned that I really liked the double balance-spring, the Moser fumé dials and the Concept watch series. Edouard immediately told me that he would let me borrow these features, but on condition that he could also reinterpret one of my machines. After an initial moment of surprise, I gave it some thought. Being 50 per cent Indian and 50 per cent Swiss, I am firmly convinced that mixing DNA creates interesting results, so why not try the experiment in watchmaking? I therefore agreed and suggested the FlyingT model, which is particularly dear to my heart.” 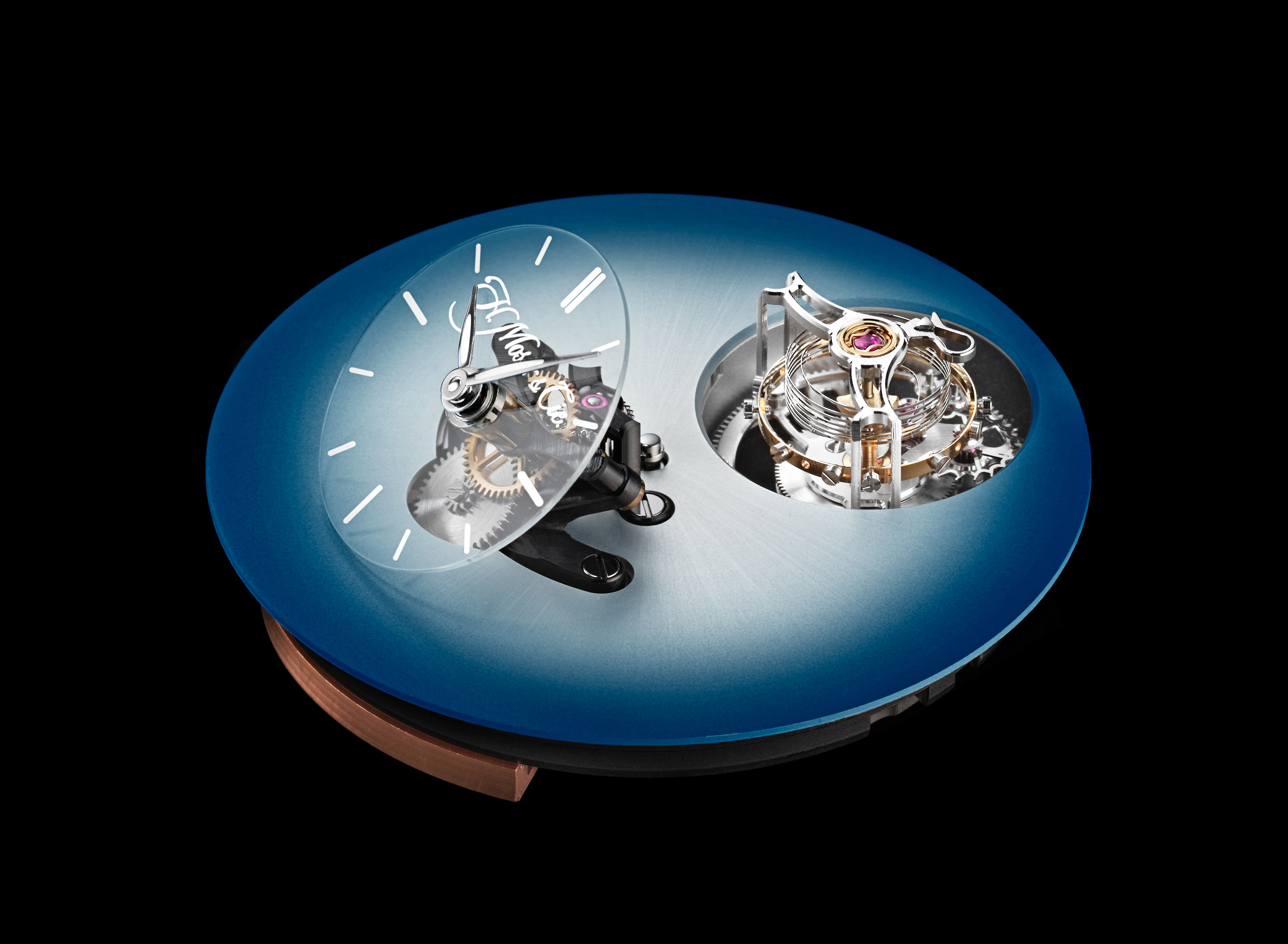 It wasn’t a cold call made out of the blue by Max either – Meylan and Büsser’s bromance is long and richly endowed – it is actually one that spans many years. And it’s a relationship that has already stretched into each other’s professional lives, with Precision Engineering AG, a sister company of H. Moser & Cie, providing all of MB&F’s balance springs. 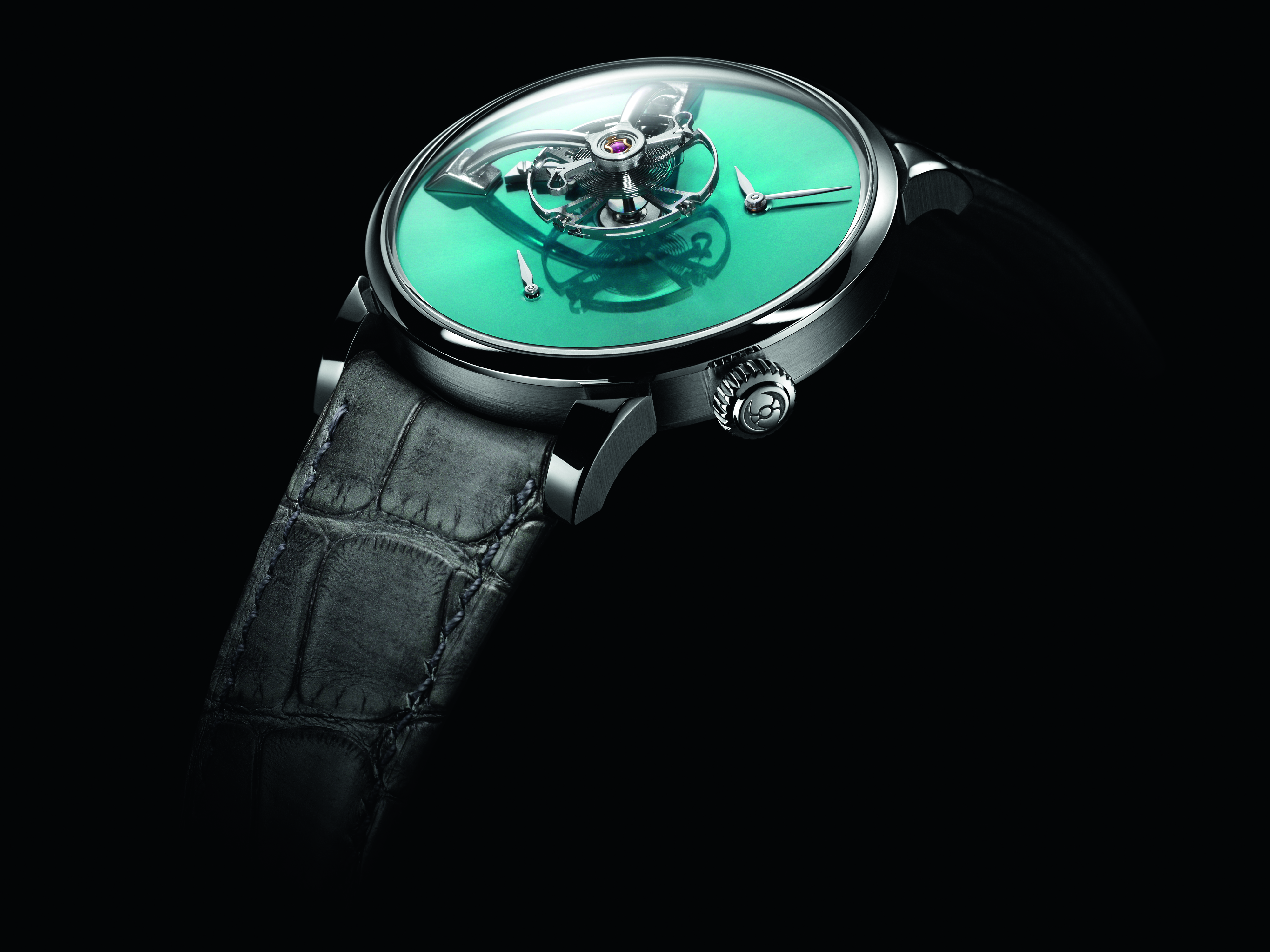 This level of cooperation is unprecedented and very exciting, so let’s take a closer look at each of the watches. 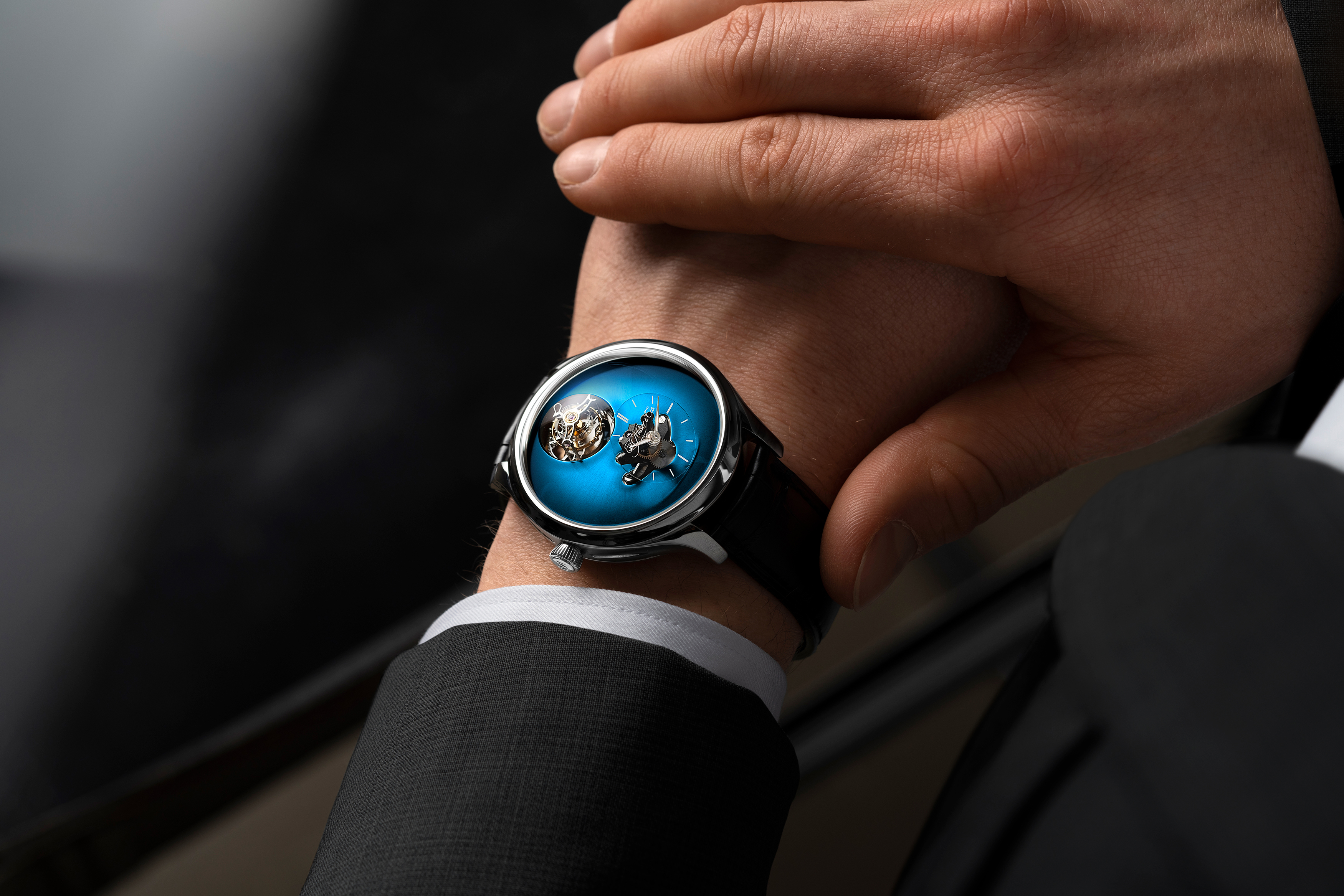 The first is the H. Moser x MB&F Endeavour Cylindrical Tourbillon, which is essentially a “Moserised” interpretation of MB&F’s iconic FlyingT. It’s a very extroverted timepiece … but in a good way. In fact, I may actually like it more than the regular FlyingT (“regular FlyingT”, I know, an absurd sentence). 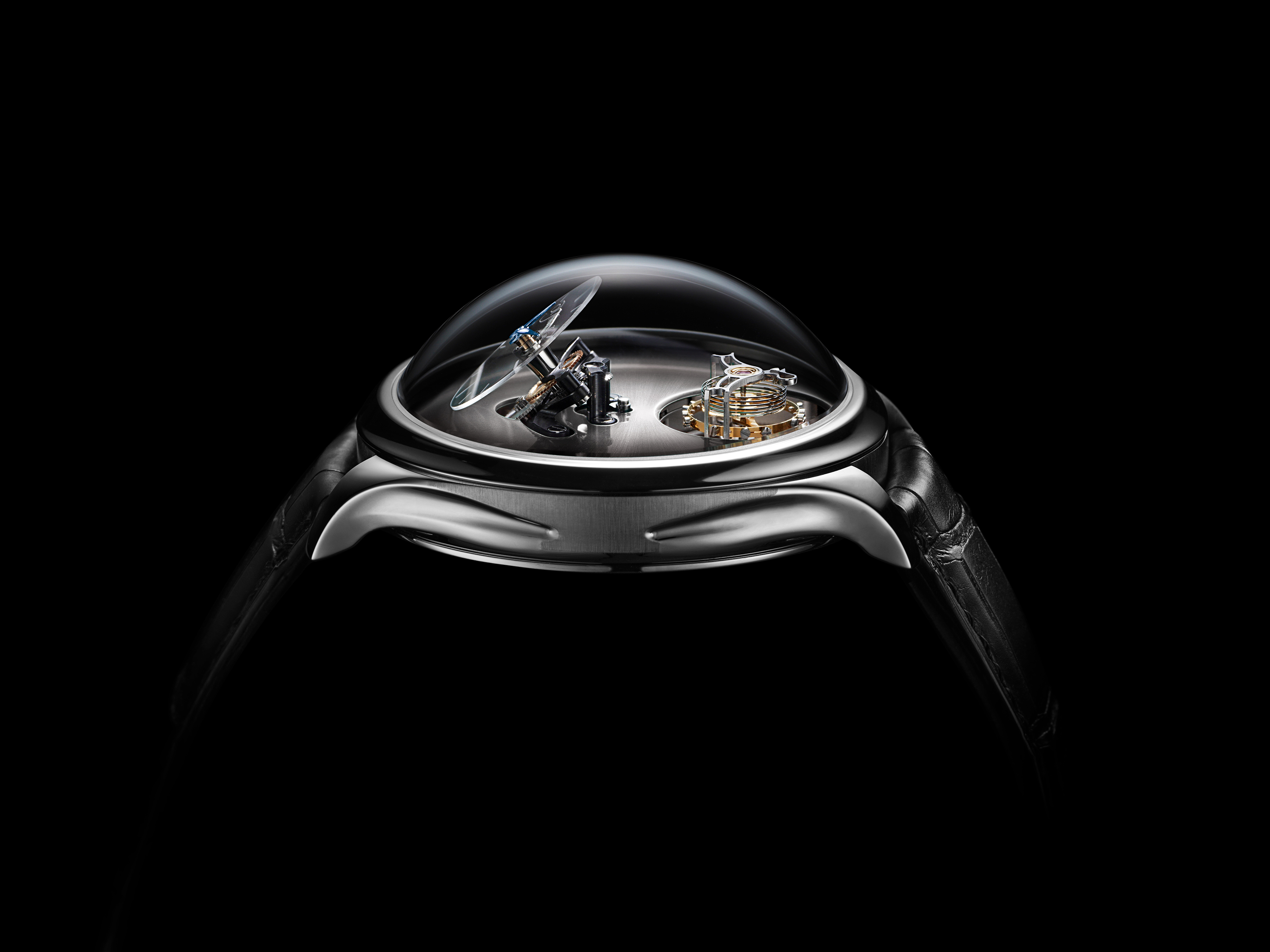 One of the biggest changes is that this new timepiece, as its name suggests, borrows Moser’s ever-popular Endeavour case design. That means a beefed-up case size of 42mm across, as opposed to MB&F’s FlyingT, which measures in at just 38.5mm. This extra real estate appears to have done wonders for the overarching aesthetic of the watch, especially considering that its extra size appears to have softened the visual blow of the bulbously domed sapphire crystal. That’s no mean feat either, as the whole watch is, weight for it (pun intended), a whopping 19.5mm thick.

Mind you, the domed crystal is obviously there for a reason, as it allows the vertical sapphire plate, angled at 40°, to sit proud of the dial, creating the famed 3D appearance of the original FlyingT. Equipped with Moser’s manufacture Calibre 810, the haute horology on display is almost otherworldly, which is exactly what you’d expect these two watchmakers to create. The highly complicated movement’s pièce de résistance is a one-minute flying tourbillon, which is visible thanks to a ventricular aperture located at 12 o’clock that looks like something akin to a mountain rising out of the sea. Spectacle at its finest. The Calibre 810 features a cylindrical balance spring, Breguet overcoil and 72 hours of power reserve. Just 75 examples of the H. Moser x MB&F Endeavour Cylindrical Tourbillon will be produced, and they’ll be spread across five different iterations of 15 examples each, which will feature different dial colours including Funky Blue fumé, Burgundy fumé, Cosmic Green fumé (our favourite), Off-White fumé and Ice Blue fumé dial. As for price, well it’s this or a Porsche Cayman ($79,000 USD) -maxi or micro machine, the choice is yours. 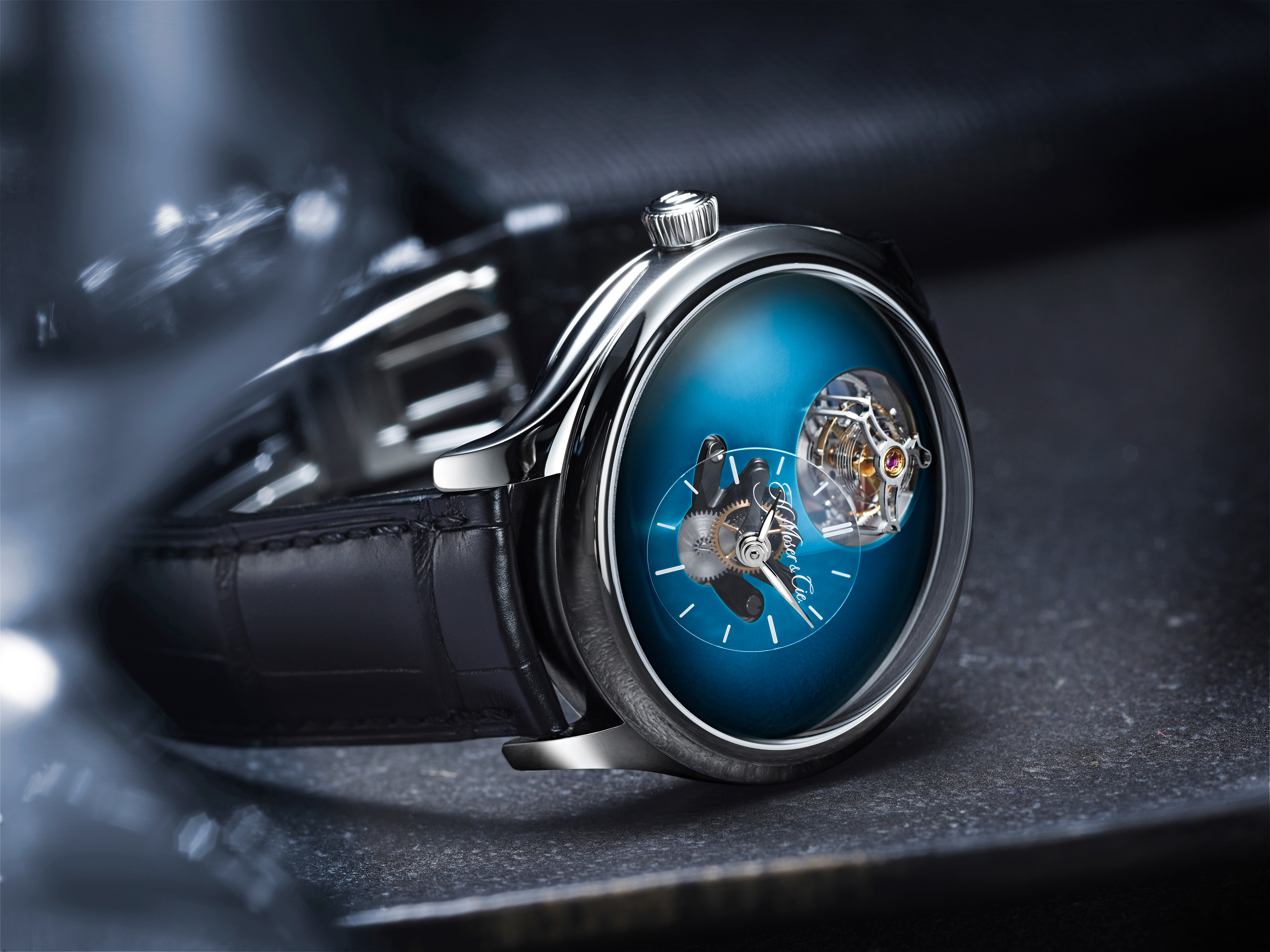 The second baby is the LM101 MB&F x H. Moser. As far as Legacy Machine 101s go, this may well be the nicest example to date. Unlike other iterations of the famed model, Büsser has decided to ditch the normal floating sub-dials of the LM101 in favour of an incredibly minimalist display that just shows hours, minutes, power reserve and the large centrally mounted balance wheel, which are all set against a quintessential Moser fumé dial. The stark beauty of this simplistic design appears to be a real winner, and one that perfectly exemplifies the characteristics of both watchmakers. Dimensionally, the stainless steel case remains unchanged from other iterations of the LM101, still measuring 40mm across and 16mm thick (thanks mostly to a very spherical sapphire crystal). 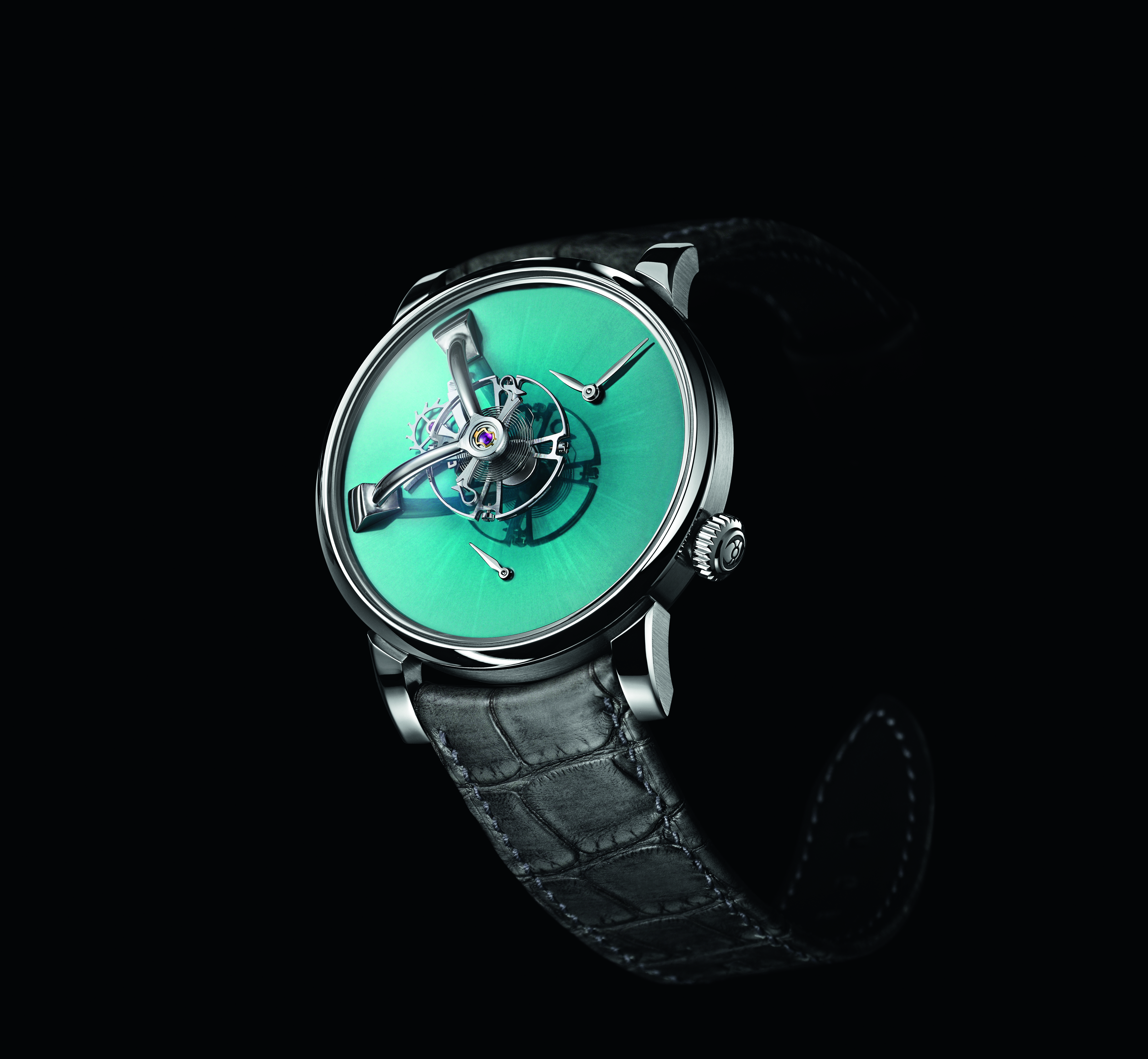 Inside the familiar case is the same manufacture movement found in other LM101s – the LM101 Engine. This talented effort of horology is manual winding, beautifully decorated, has 221 components, 23 jewels and a power reserve of 45 hours. Limited to just 60 pieces in total, the timepieces will be spread across four different dial iterations of 15 examples each that will comprise Funky Blue fumé, Cosmic Green fumé, Red fumé and Aqua Blue fumé (which are being made exclusively for the retailer Ahmed Seddiqi & Sons). The price of the LM101 MB&F x H. Moser is $52,000 USD, which, given the current gross inflation of certain steel sports watches, could actually be considered a very strong value proposition. 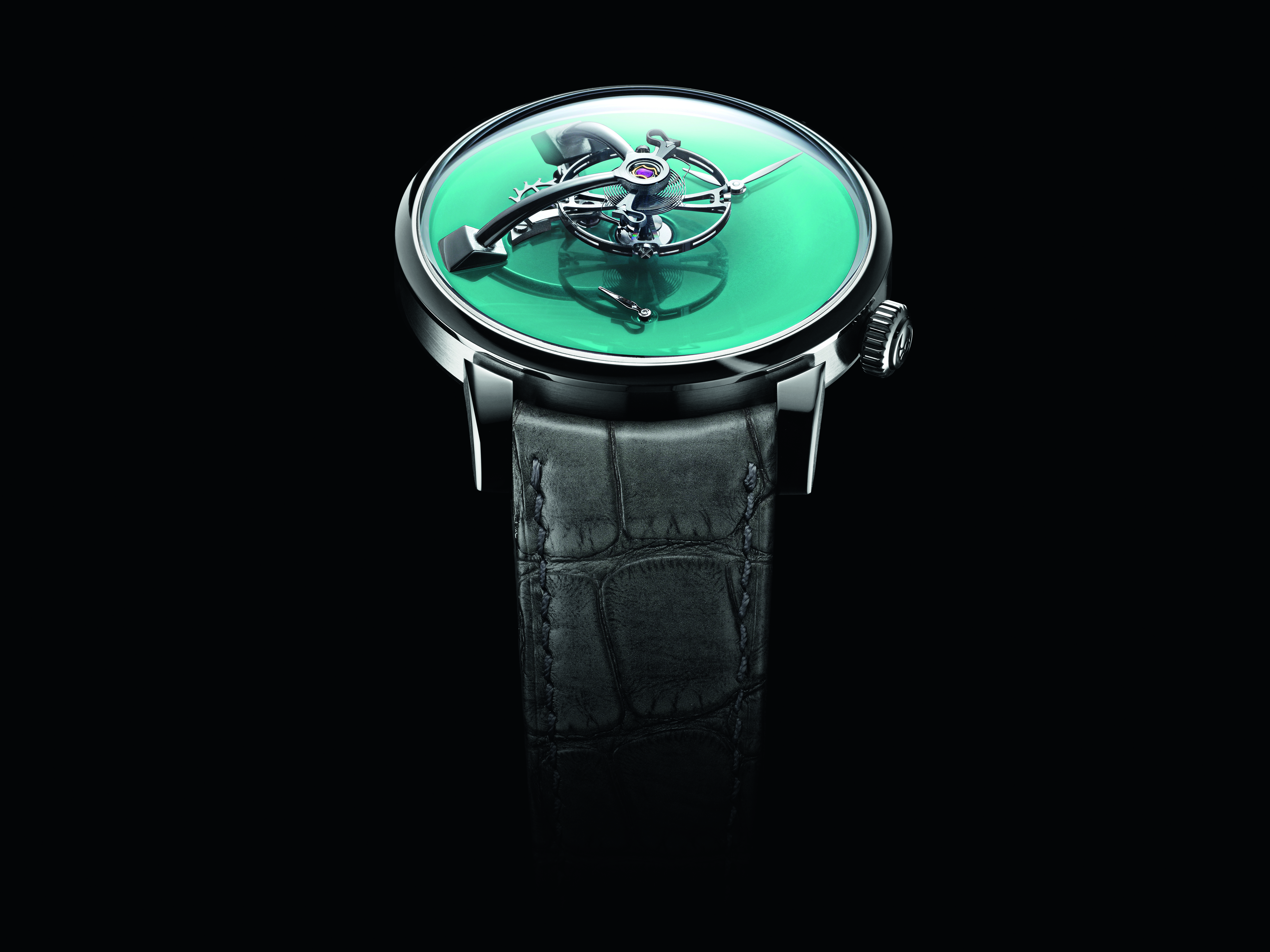 This has been a surprising move by both Moser and MB&F, and it comes with dangerous levels of electricity. It’s genuinely electric to see watchmakers come together to create unique and novel creations. Now I’d just like to see them collaborate on something that is perhaps a touch more accessible to mere mortals like myself. A man can dream.