“In terms of haute horlogerie complications we could do anything we like at Louis Vuitton – and we certainly have the means to do so. But that’s not our approach. What we do is deeply rooted in classical horology, but every piece needs to have an original twist that has real meaning for the Maison.” So says Michel Navas who, together with Enrico Barbasini, is the technical brains behind Louis Vuitton watchmaking.

The Escale Time Zone perfectly illustrates this. Introduced in 2015 (with a version in tones of blue and grey last year), it looks unlike any travel time watch that preceded it. Or, more precisely, that preceded Louis Vuitton’s Escale Worldtime, released a year earlier. 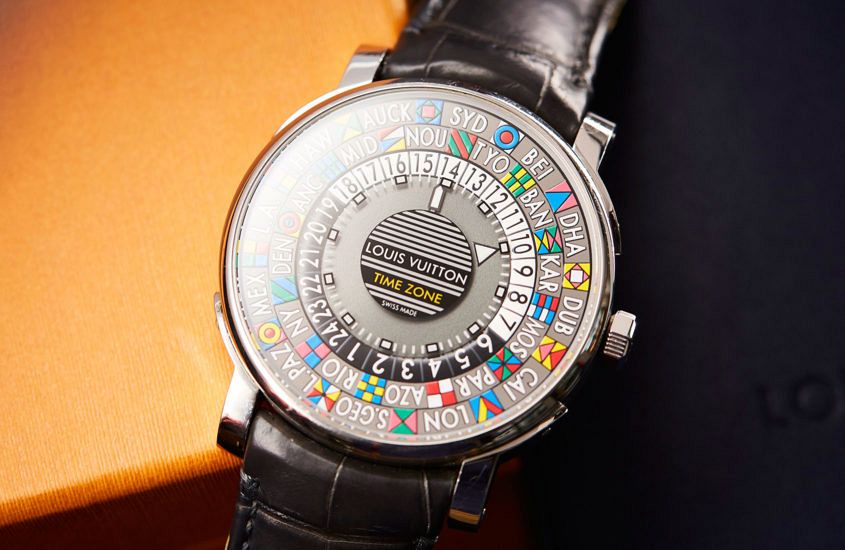 Time Zone is, by the way, almost a misnomer: the term usually means a second (or in rare cases third) time zone display – a GMT in other words. But this is a true world time watch. Clearly, though, it needed a different name to distinguish it from its big brother.

The technical underpinnings are entirely classical – it’s essentially the same as the complication invented in 1931 by Louis Cottier (and improved by him in 1953), which made it possible to view the time in 24 zones simultaneously.

However, the expression is totally original – the vivid and playful dial a radical departure from the usual world map surrounded by city names. To be fair, that became the default design because it’s a great aid to visualising world time, but has become a bit of a cliché.

The multi-coloured emblems are reminiscent of maritime signal flags (Louis Vuitton was deeply involved in America’s Cup sailing until a couple of years ago) but they also hark back to the firm’s history as a trunk-maker. Back in the 19th century, Louis Vuitton would create unique personal ID badges for the luggage of clients who didn’t have their own coat-of-arms – simplified emblems distinguished by geometric shapes and bright colours. For the watch dials, the same principle has been used to create a ‘badge’ for each city. 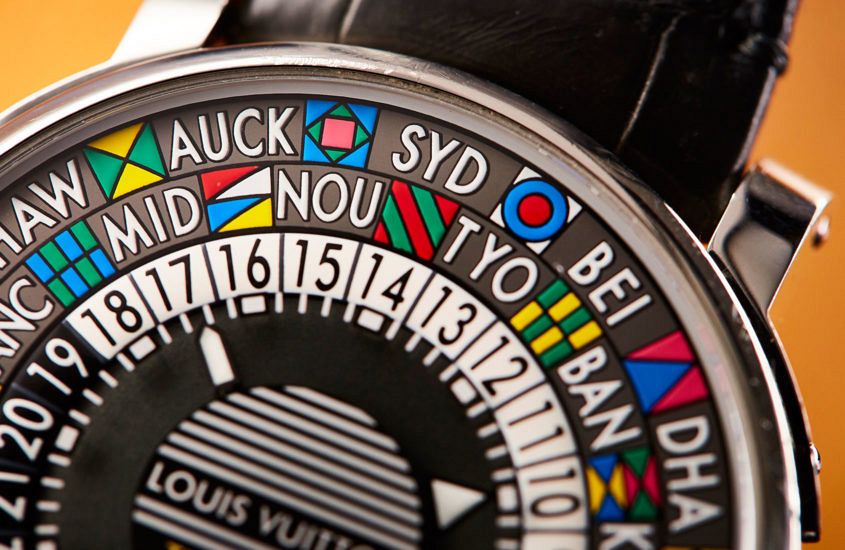 But the Time Zone is not just a pretty face: Louis Vuitton’s evolution in high watchmaking is a world away from the fashion watches that can be a cash cow for any big luxury brand, and that’s thanks to Navas and Barbasini. Among the most inventive watch developers of their generation, they have worked together for more than 30 years – at Gérald Genta (during Genta’s heyday as a creative, independent brand) and Patek Philippe (in the high complications division) before moving on to Franck Muller (where they developed Crazy Hours) and then starting their own business. In the early 2000s they were the B and N of BNB Concept, a highly regarded independent movement-developer for other brands – including Laurent Ferrier, a fellow Patek alumnus. They left to set up La Fabrique du Temps in 2007 (the third member of the BNB triumvirate, Matthias Buttet, is now with Hublot). 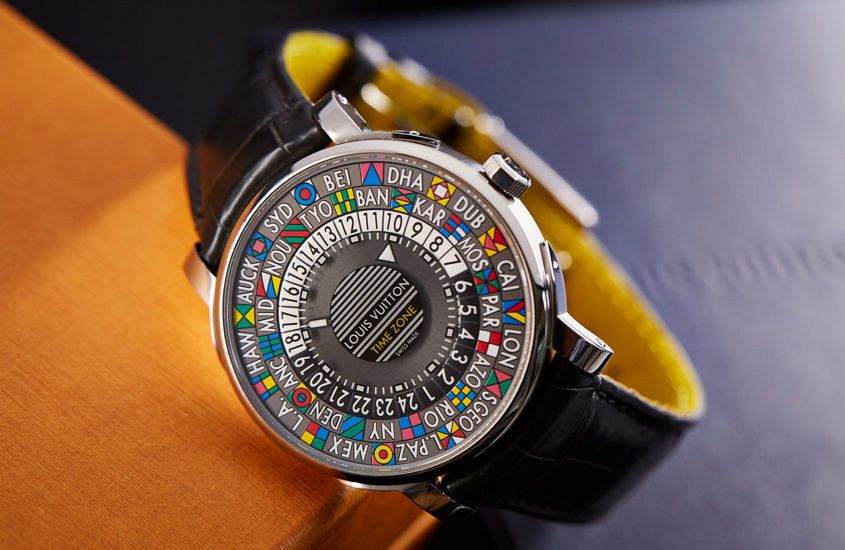 Although Louis Vuitton had been a client from the beginning – the Spin Time (launched in 2009) was the first fruit of that collaboration – many were surprised when it bought La Fabrique du Temps outright in 2011. Not least, Navas and Barbasini: “We have more creative freedom than we ever imagined we would,” says Navas. “In fact they want us to really go for it – so long as it embodies the essence of Louis Vuitton.” The outcome, so far, has ranged from the Tambour Twin Chrono of 2013 (which allows two elapsed times to be calculated simultaneously) to the Tambour Moon Mysterious Flying Tourbillon of 2016, with its ‘floating’ linear movement (and Geneva Seal certification) – and, of course the Escale series.

So, back to the watch: given all the information it needs to display, a world timer dial can’t help but be busy – so, rather than trying to reduce that, Louis Vuitton’s designers have made it a virtue. With its bold graphics, startling colours, iconoclastic style, it’s polarising, for sure – and it’s very refreshing to see aesthetic conventions being overturned. 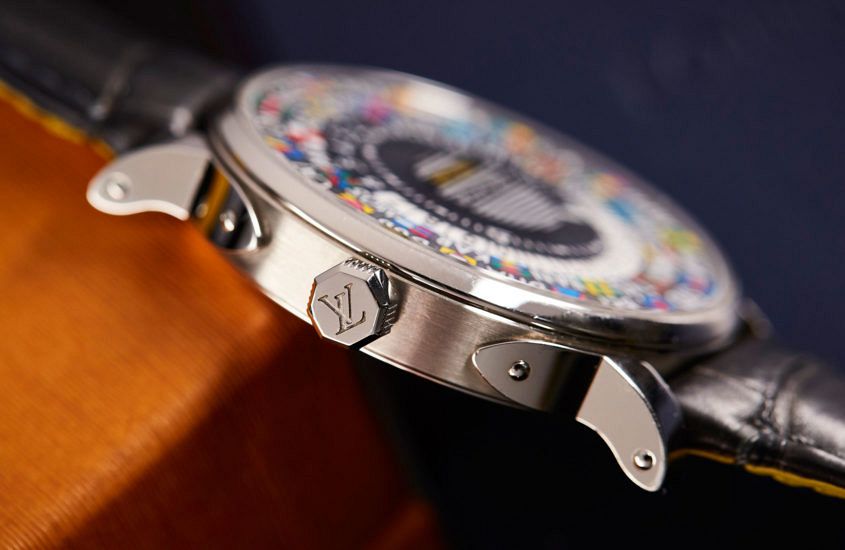 The Time Zone presents the key attributes of the Escale Worldtime in a smaller and slimmer (39mm x 8.4mm) version of its big brother. And in its degree of hand-crafting, it is much, much simpler – all of which means that it’s a tenth of the price. There’s an important distinction here: simplified doesn’t really mean watered down, it just means that priority is given to certain core attributes.

Where the Worldtime dial was a masterpiece of miniature painting (50 hours of painstaking hand craft to apply the 38 different colours), the Time Zone dial is transfer-printed, using a slightly simplified colour palette. However, the quality of printing is such that there’s still a subtle relief-effect to the coloured emblems.

As world time watches go, it could hardly be more user-friendly. To set your local time, you simply turn the crown backwards or forwards to position the city name at 12. The times in all other zones can then be read from the 24-hours disc – which is also marked with day and night sections to avoid confusion. 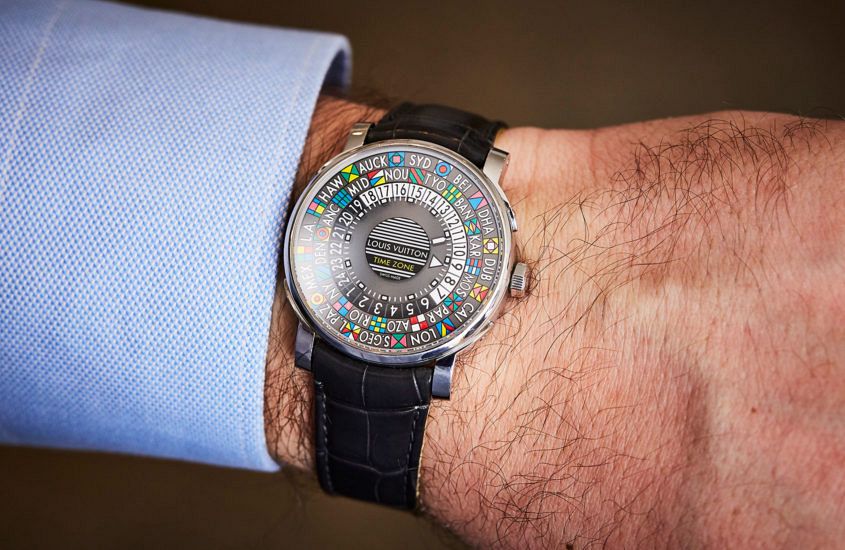 Reading the local time is more intuitive (or at least, more familiar to our analogue-dial-trained brains) than the Worldtimer, using hands rather than a fixed pointer for local time. But here’s another twist: while the minutes hand is attached to a central axis in the conventional way (covered by a disc at the centre of the the dial), the triangular hour hand has been applied to a disc so that it appears to float – in a manner reminiscent of mystery clocks.

Rather than the in-house calibre LV 106 used for the Worldtime (with the high cost that entails), the Time Zone’s movement is the ultra-reliable ETA 2829, coupled to a module developed and produced in-house by Navas and Barbasini’s team. (The pair remain very hands-on watchmakers, by the way – and assemble at least some of the first production run of any new model, to catch any potential bugs before they become an issue for their watchmakers.)

Although the caseback is sapphire, it doesn’t reveal the movement (having no need for fine hand-finishing also cuts a significant amount of cost). What it does show is a large LV logo, very neat and tidy. 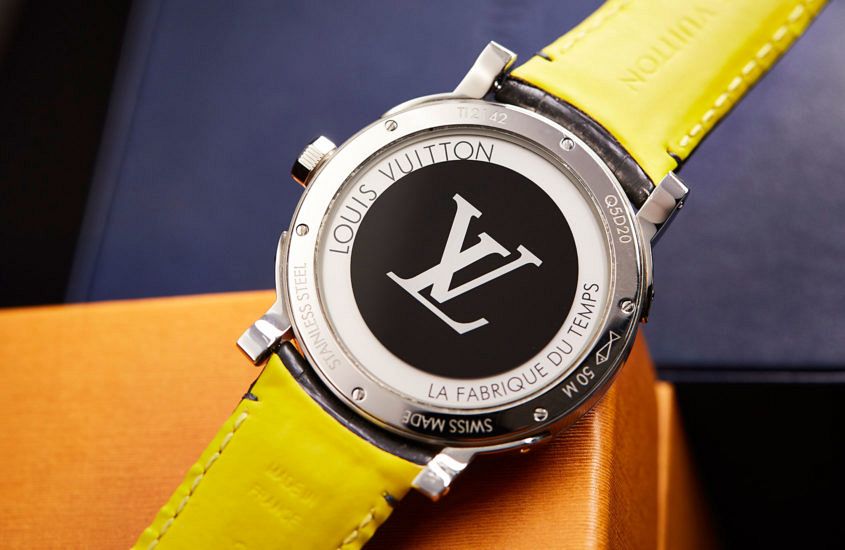 The Time Zone case is steel – lighter, sturdier and less expensive than the white gold of the Worldtime – but with all of the same details and finishes. The lugs are attached by screwed brackets inspired by the metal reinforcements on the corners of trunks, and their polished surfaces contrast very well with the brushed case band. Another nice detail is the use of curved spring bars to ensure that the end of the strap hugs the curve of the case.

For any of you still labouring under the misguided impression that Louis Vuitton doesn’t produce “real” watches, the Escale Time Zone is a (very) long way from a fashion watch – and its playful aesthetic proves that totally legitimate horology doesn’t have to look po-faced. Best of all, it’s a very useful watch – not only for frequent fliers, but for all of us who have friends, family or business relationships on different continents.

Made in partnership with Louis Vuitton. However, the opinions expressed in this article are our own in
accordance with our Editorial Policy.