I’m just going to say it. Nowadays, no one actually “needs” a chronograph. I mean, really, how often does the need for a stopwatch arise? And if it does, we all have those smart little assistants in our pockets (gasp! blasphemy, I know). However, there’s a certain mechanical allure to the humble chronograph watch. No other complication requires quite as much interaction from its owner. From the compressing of a little pusher with our fingertips, to feeling the click of tiny levers and gears inside before the second hand races off. There’s a reason the chronograph is considered a must-have for any watch nerd. Every year we see a plethora of new chronograph releases, and this year we’ve picked 11 of our favourites. 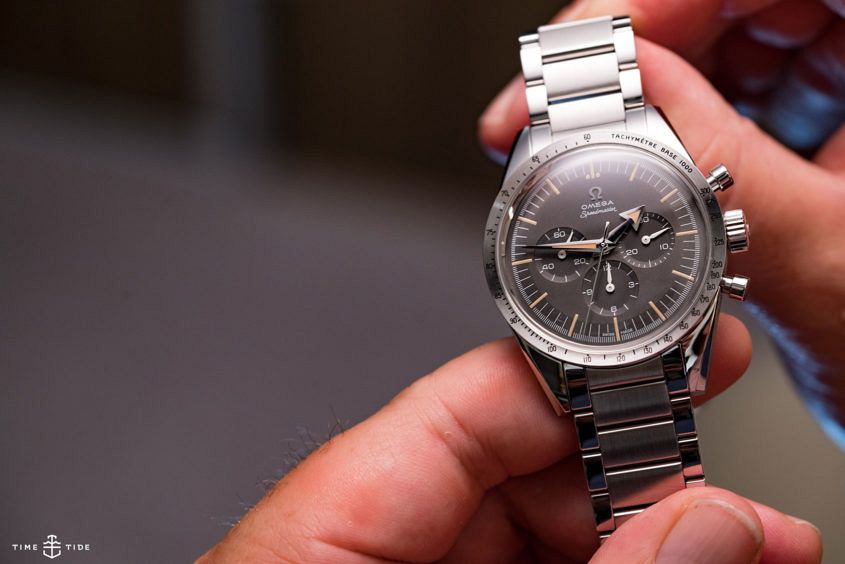 This is anything but just another limited edition of the iconic Speedmaster. To celebrate the icon’s 60th birthday, Omega wanted to do something special, and the result is this pitch-perfect reissue. Sized at a faithful 38.6mm with broad arrow hands, an applied logo, and even a “dot over ninety” bezel. It’s as close as you’ll get to owning the one that started it all, without shelling out a six-figure sum. RRP $9725 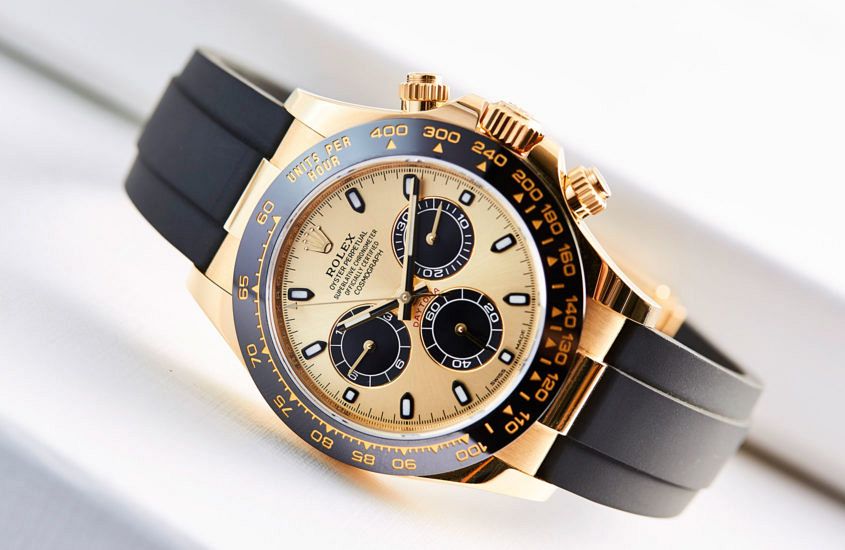 Last year, the motor-racing icon was upgraded with a Cerachrom bezel. And this year, Rolex have substituted the steel case for some gold, and paired it with their ergonomically perfect Oysterflex rubber bracelet. Sport meets luxury, and black meets gold. RRP $34,900 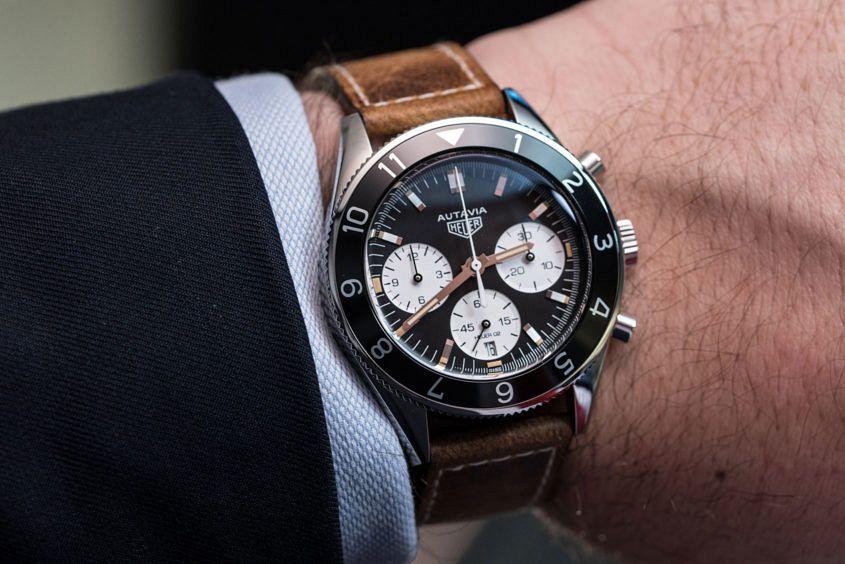 A modern chrono in pure vintage Heuer styling. With a reverse panda dial and a handy 12-hour bi-directional bezel, it’s the Autavia we all asked for, but with an added extra we weren’t expecting. The new 80-hour Heuer-02 movement, which you might recognise as the shelved Tag Heuer Calibre CH-80 from 2014. We voted and they delivered. RRP on leather, $6600; on bracelet, $A6800 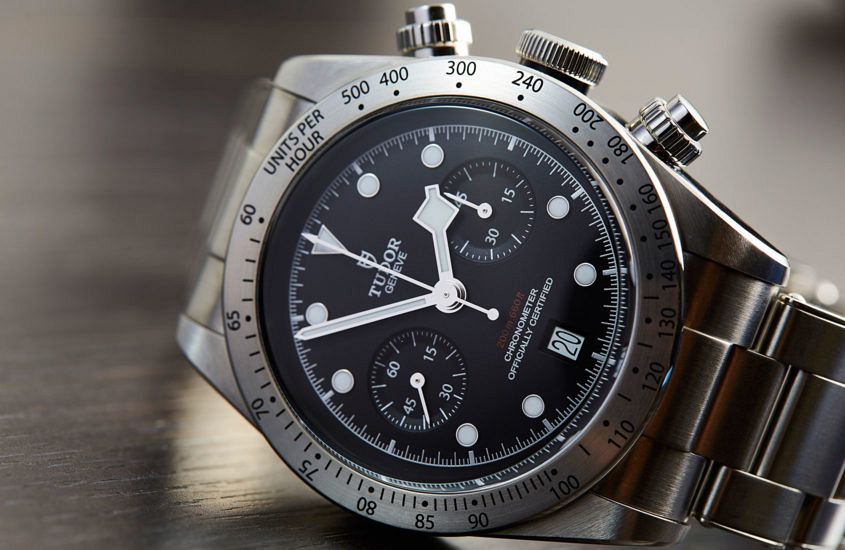 The polariser of the year. But no matter which side you’re on, there’s no doubting how impressive and important the Black Bay Chrono is for Tudor. It not only expands their ridiculously popular Black Bay collection but also shows their might as a manufacturer – with their first in-house chronograph movement made in collaboration with Breitling. RRP on leather, $5690; on bracelet, $6070 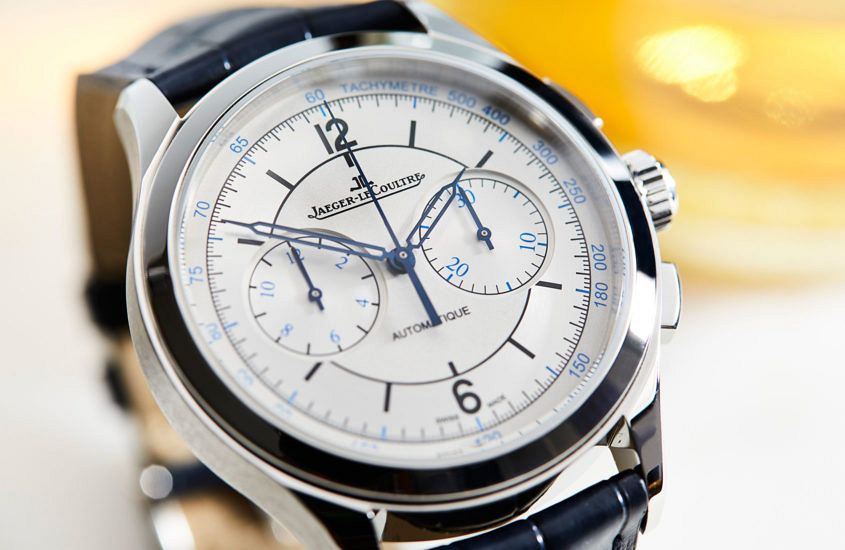 Using their impressive history as inspiration and digging into their vast in-house movement catalogue, JLC this year released the Master Chronograph. A smart and harmoniously balanced design that’s clearly retro inspired but not overtly so. Then, of course, there’s its in-house Calibre 751G movement, a 65-hour dual barrel column-wheel chronograph. RRP $11,700 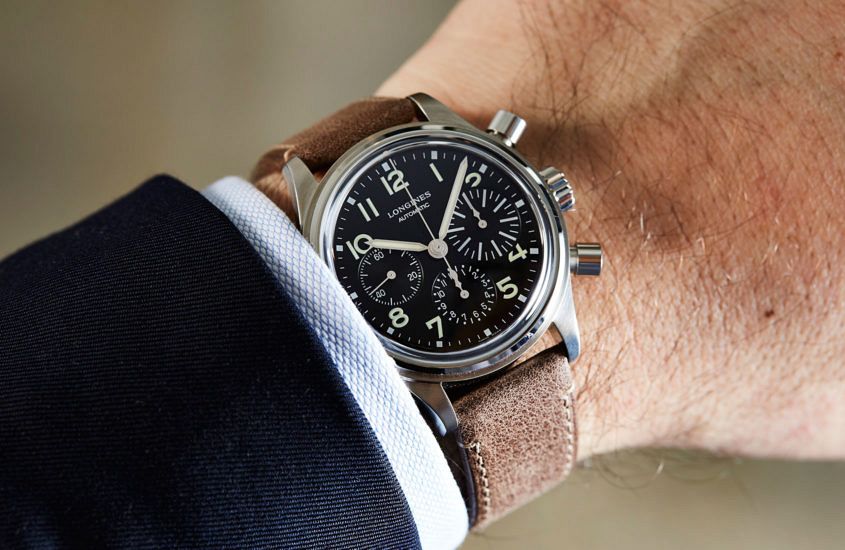 I’ve said it before, and I’ll say it again: no one does heritage revivals better than Longines. The Avigation BigEye recently won “Revival of the Year” at the Grand Prix d’Horlogerie de Genéve, and it’s easy to see why. Not to mention the column-wheel chronograph movement with a power reserve of 54 hours beating away inside. All for less than four large. RRP $3450 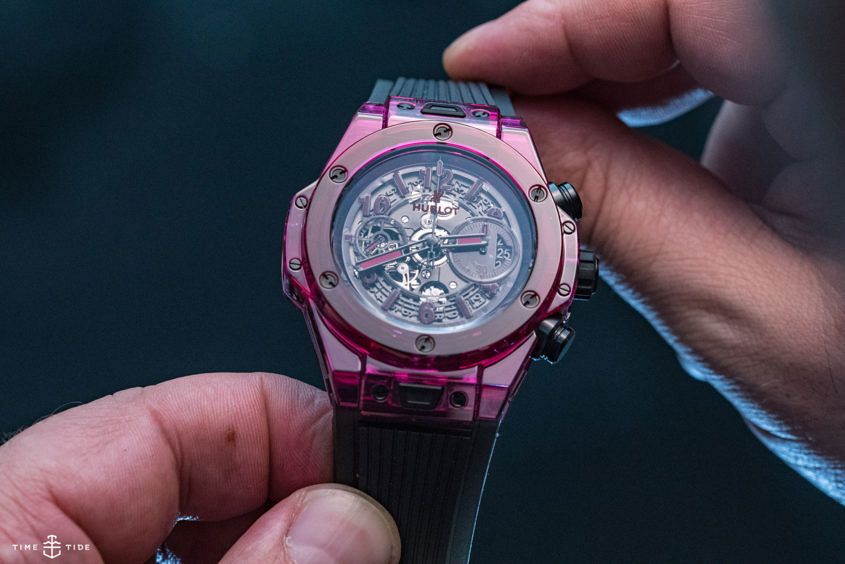 This sapphire Big Bang is clearly (no pun intended) not for everyone. But there’s no denying its cool factor, and not just because of its bright and bold looks. You see, the sultans of sapphire have made a statement — these translucent crystal cases are here to stay. Limited to 250 pieces, RRP $95,000 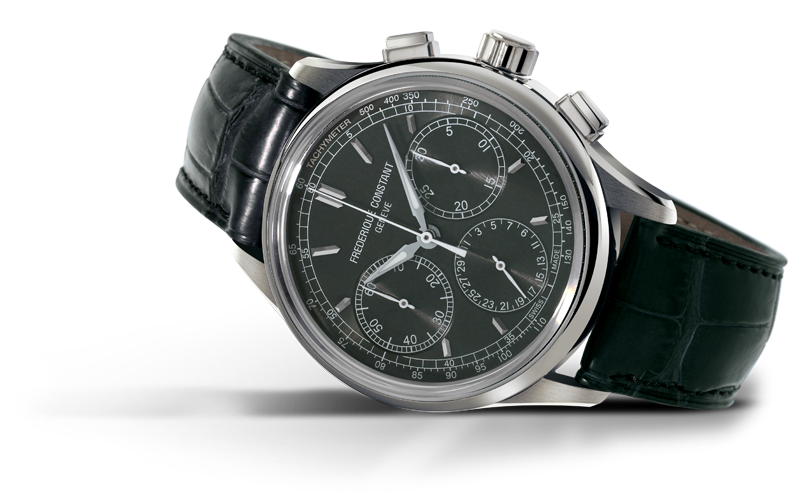 FC have upped the value stakes with their latest. A classically handsome three-register chronograph, powered by an in-house movement, six years in the making. With a flyback function, a unique star-shaped column wheel, and a clever new clutch system. The best thing is the price tag. RRP 3695 Euro 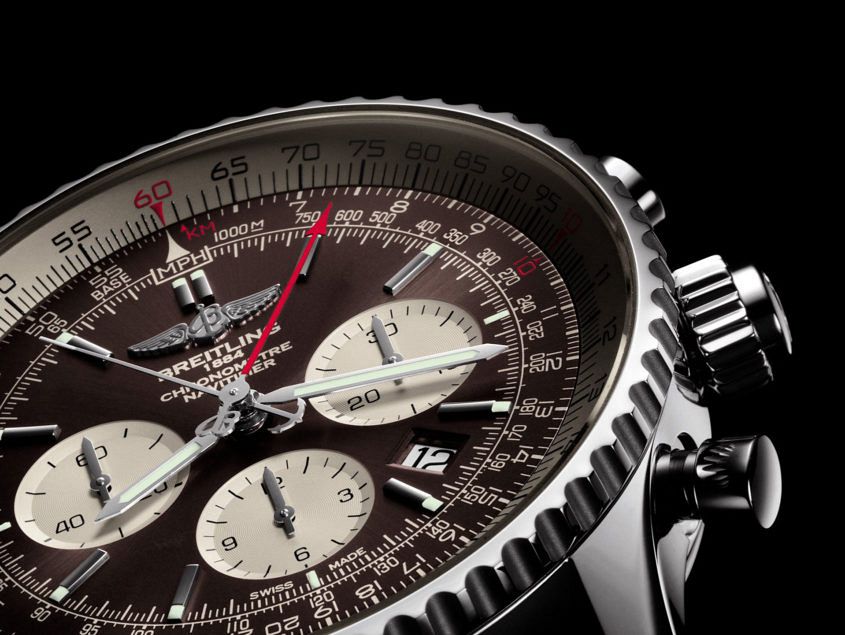 With a sultry bronze-coloured dial, and featuring, for the first time ever, an in-house split seconds chronograph. The iconic Navitimer is even more the undisputed hero of the skies. Its calibre B03 movement has been fully developed by Breitling, and is based on the calibre B01 that they recently shared with Tudor. RRP $14,980 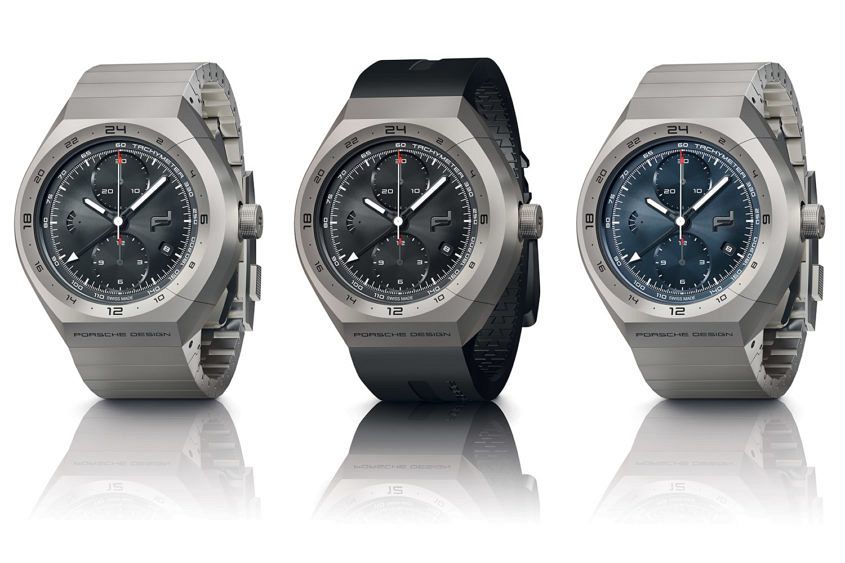 Porsche Design are one of the few brands that can openly boast about a link to motor racing. With a sleek case design that harks back to the brand’s early days and their pioneering use of titanium. The design of the Monobloc Actuator is inspired by the engines of race cars, and features a hidden chronograph rocker switch built into the side of the case, as well as a handy second time zone display. Perfect for the 24-hour motor race fan. RRP 6450 Euro 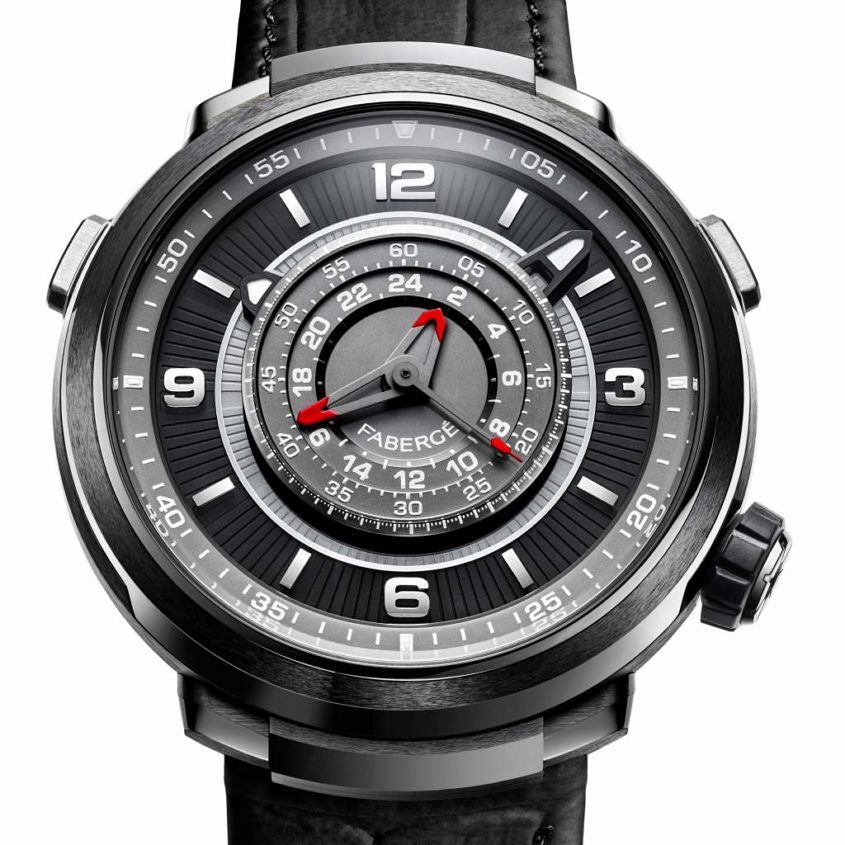 Better known for their elaborately bejewelled eggs, Fabergé brought the heat this year with a revolutionary new take on the chronograph. The dial and its sub-dial-less design may take centre stage. But turn the Visionnaire over, and you’ll see why it made the list. The groundbreaking Agenhor AgenGraphe movement inside. With a host of technical innovations, Agenhor have reinvented the chronograph. RRP in steel $55,492, rose gold $63,535