There’s a watch out there that could genuinely change your life. It could make you happier, healthier and more successful. It could help you regain a sense of control in these messed-up times and add some much-needed pep to your step. The best part? You can pick one up here for the princely sum of $150.

The watch in question is a Timex Ironman T66801 and it belongs to Jocko Willink, the man that Tim Ferris famously dubbed “the scariest Navy SEAL imaginable”. 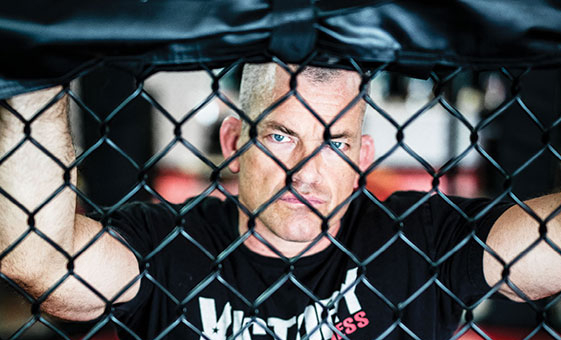 Willink is certainly an intimidating customer. He’s a 104kg man-mountain with a permanently fresh buzzcut and a black belt in jiu-jitsu. The 48-year-old is also a bona fide legend in the Special Operations world. The former Navy SEAL commanding officer led the most decorated special ops unit in the Iraq war (American Sniper Chris Kyle was their point man) and would later oversee the military training for all the SEAL Teams on America’s west coast.

Since retiring from the military, Willink co-founded Echelon Front, a multi-million dollar leadership and management consulting company. He’s subsequently published a succession of bestselling books including Extreme Ownership: How U.S Navy Seals Lead and Win and Leadership Strategy and Tactics, as well as launching The Jocko Podcast, a highly successful weekly chat about kicking goals in business, war and relationships (it turns out you can apply disconcertingly similar principles to these very different realms).

Willink’s life philosophy is brutally straightforward. In a nutshell, he propounds that you can become a fully optimised version of yourself by getting up earlier, working out more, sticking resolutely to your values and pushing hard to achieve your goals. His guiding mantra: “discipline equals freedom”. 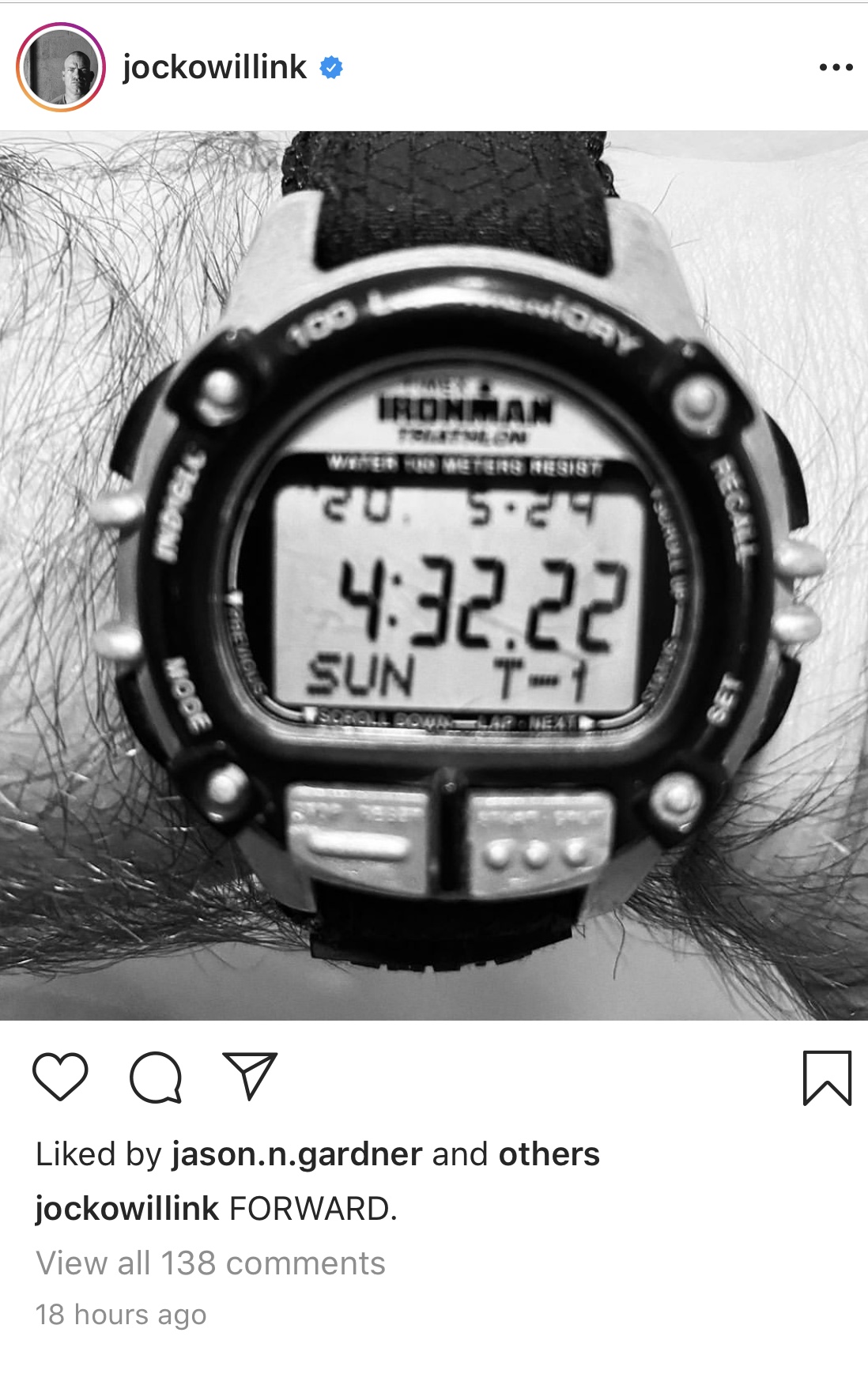 This creed is most glaringly visible in Willink’s commitment to waking up early. “The test is not a complex one,” he writes in Extreme Ownership. “When the alarm goes off, do you get up out of bed, or do you lie there in comfort and fall back to sleep? If you have the discipline to get out of bed, you win—you pass the test. If you are mentally weak for that moment and you let that weakness keep you in bed, you fail. Though it seems small, that weakness translates to more significant decisions. But if you exercise discipline, that too translates to more substantial elements of your life.”

To demonstrate this commitment (and give his 1.3m Instagram followers a regular dose of seize-the-day motivation), practically each morning on social media he posts a new image of his Timex watch. The picture not always shot in pin-sharp focus and the dial is noticeably scratched. More importantly, however, it displays the time when Willink attacks the day. He gets up at 4.30am. Every. Single. Day. 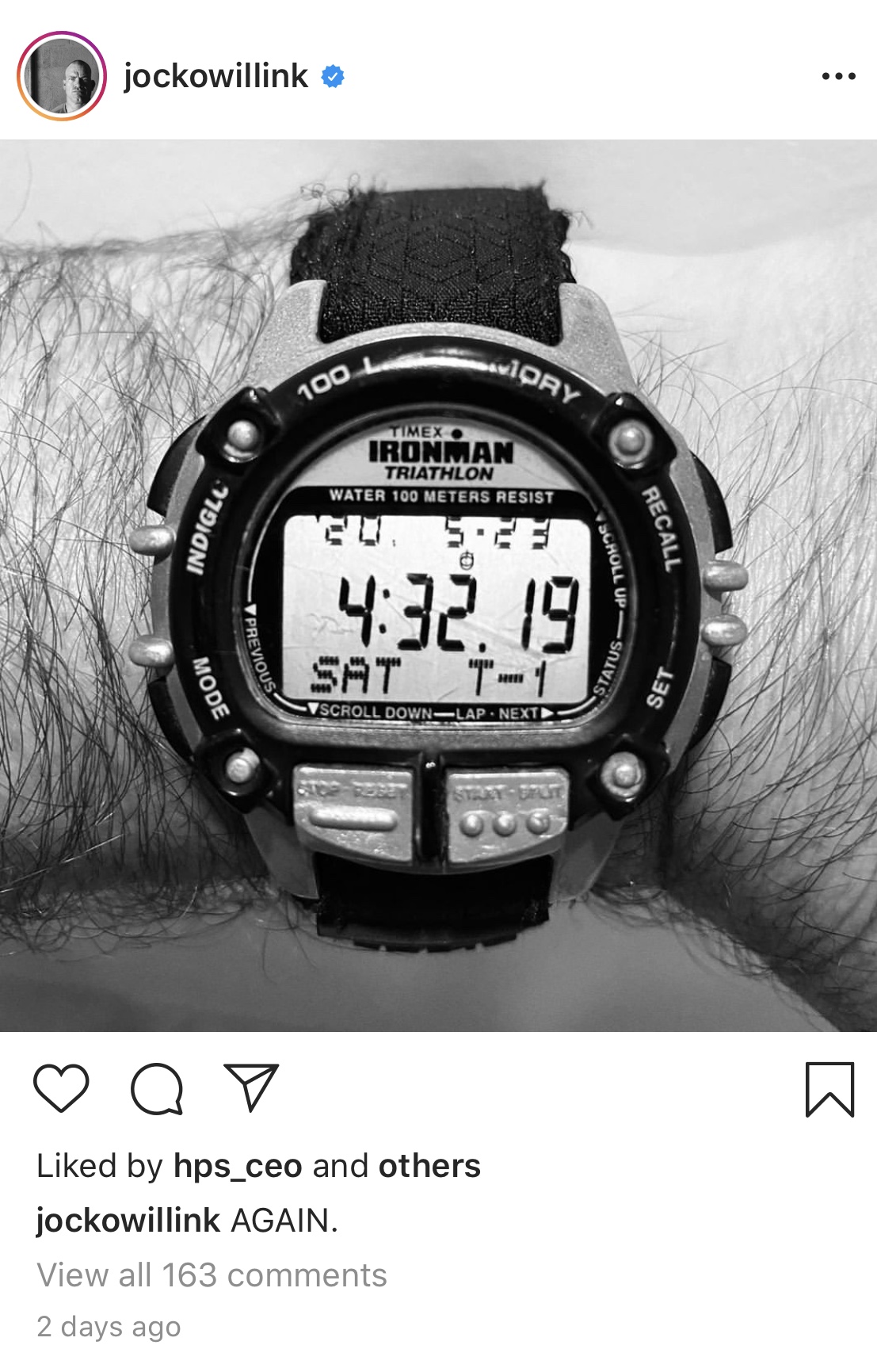 This rise-and-shine habit became engrained when Willink was just a young SEAL and noticed that the highest performers he served with were invariably those who woke up earliest to steal the edge on the slumbering competition.

Consequently, every morning Willink gets up before dawn. He throws on his workout gear that he’s laid out the previous night to ensure that he’ll start exercising as soon as possible no matter how he feels. Then he heads to the home gym in his garage and starts to smash the weights, following a four-day workout rotation (pull, push, lift, squat) supplemented with core work and intense cardio. 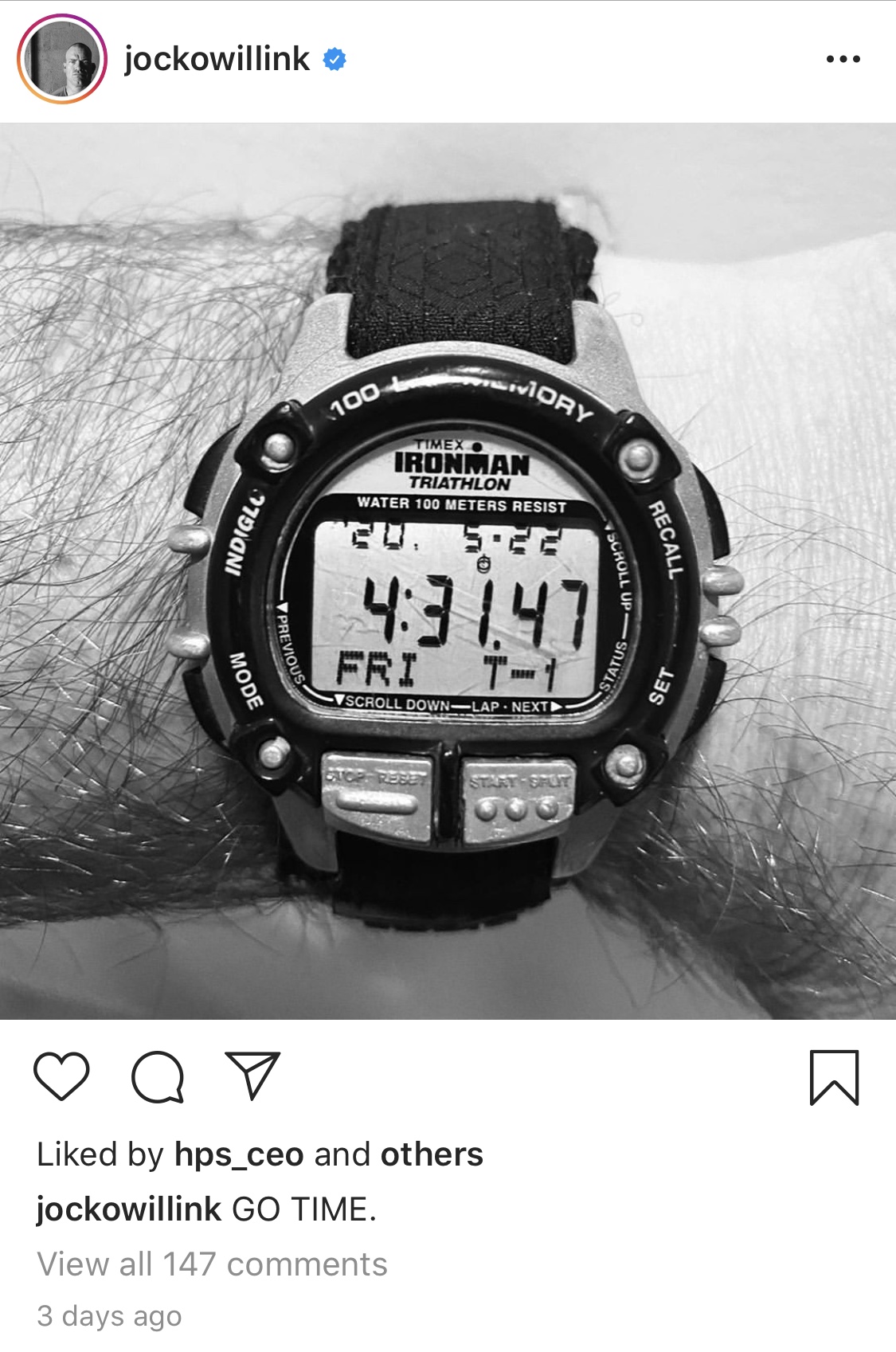 Writing in Discipline Equals Freedom: Field Manual, Willink explains: “Don’t expect to be motivated every day to get out there and make things happen. You won’t be. Don’t count on motivation. Count on Discipline.”

This ruthlessly no-nonsense approach underpins every aspect of his life. Convinced that discipline and productivity are mutually interdependent, he writes a to-do list every night that he dives into with single-minded focus after his morning shower. (Writing the list beforehand is crucial, Willink suggests, as rather than waste time pondering your options, you can then proceed on auto-pilot in the mornings.) 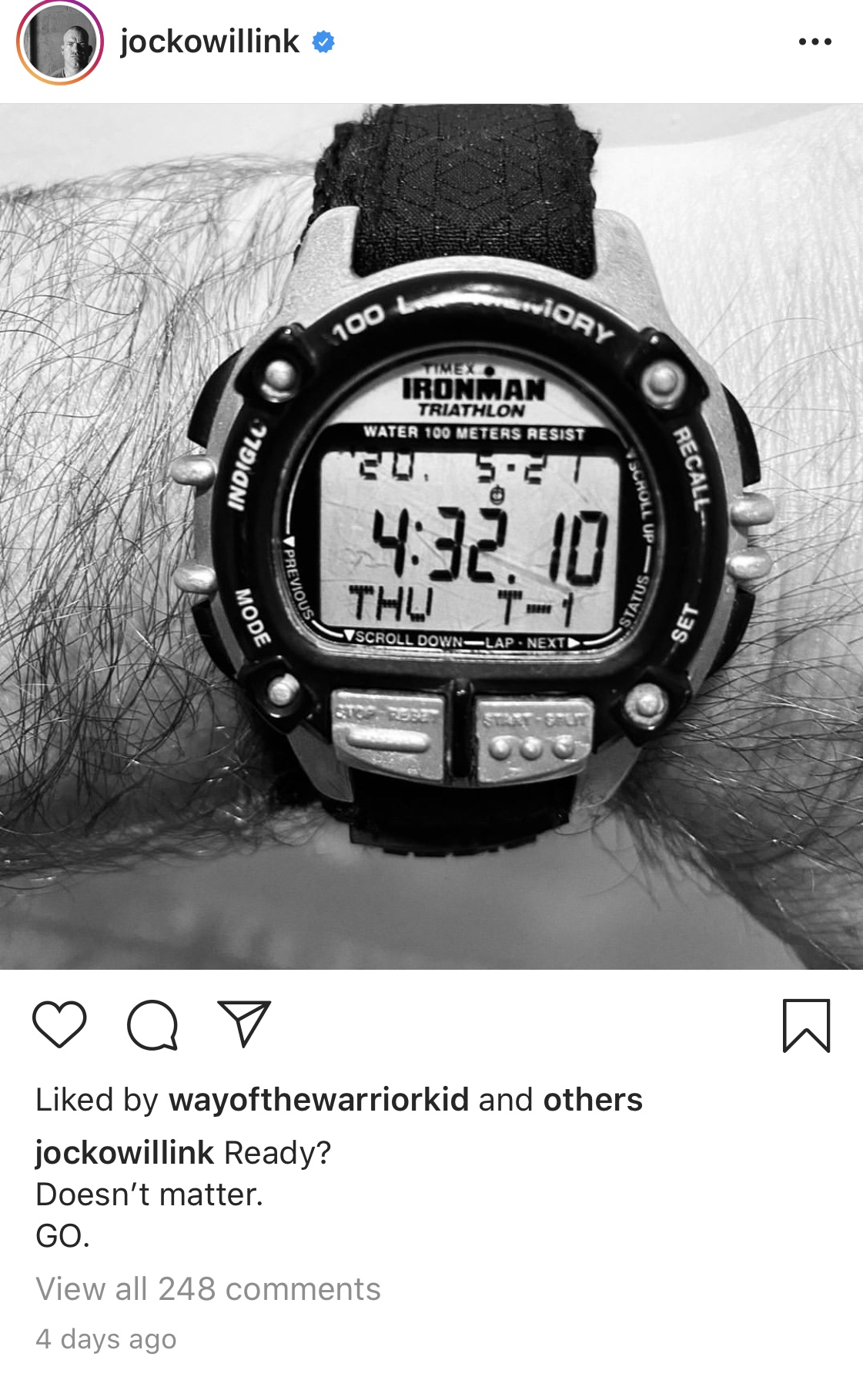 His other guiding belief is in taking responsibility and making things happen yourself. It’s an idea he articulated with characteristic directness while guest presenting the Tim Ferris Show.

“Here’s the reality,” Willink insisted, “that idea isn’t going to execute itself, that book isn’t going to write itself, those weights out in the gym aren’t going to move themselves … Stop researching every aspect and debating the pros and cons – do it now. Get after it. Here. And now. Put your workout clothes out the night before. Set your alarm for 4.30 and when the alarm goes off – get up.” 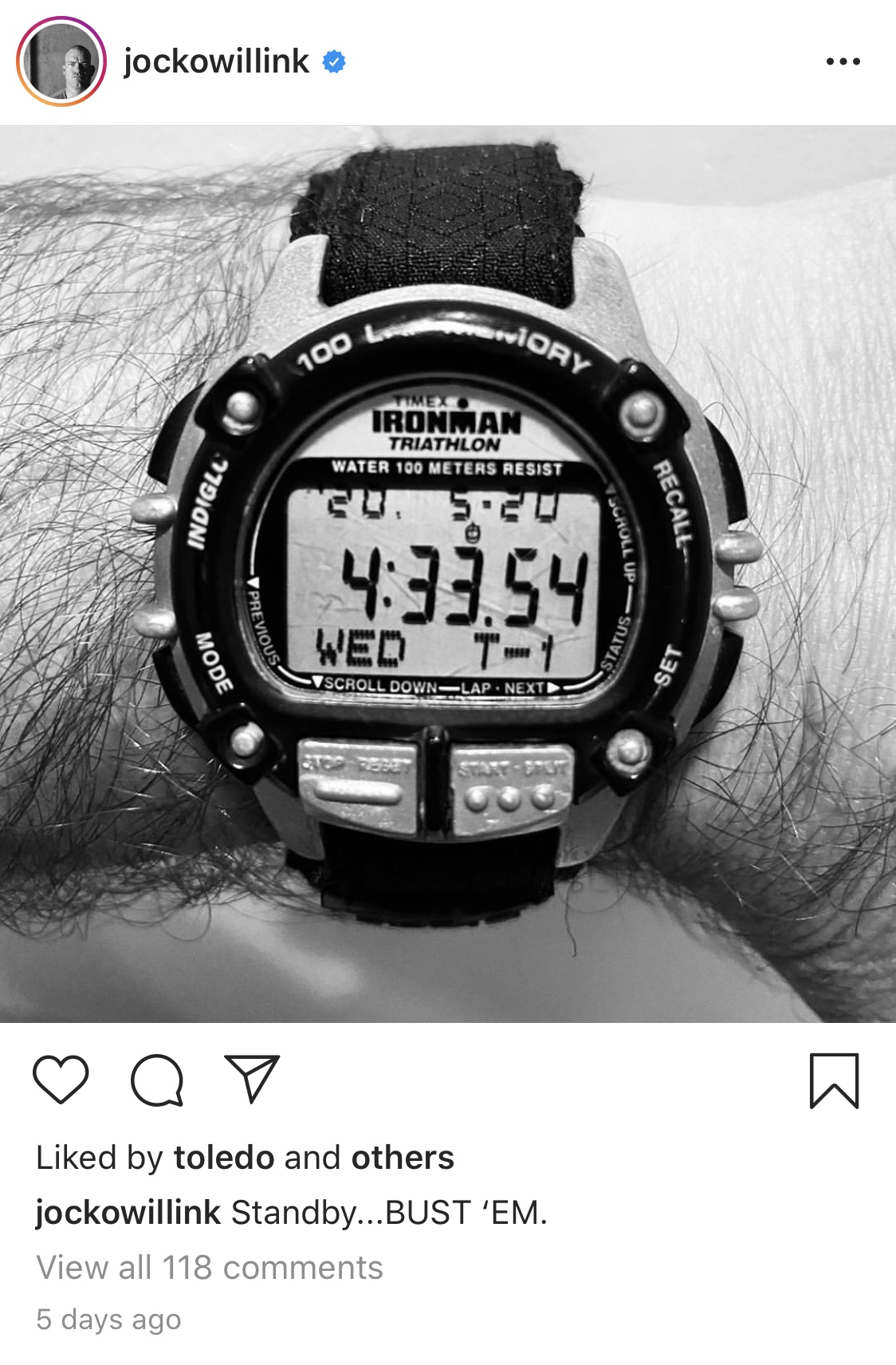 Let’s face it: nearly all of us could benefit from a touch more of this up-and-at-’em mentality. Most of us dawdle and procrastinate. We allow ourselves to get hopelessly sidetracked and disappear down endless YouTube wormholes. Either we lack the clarity of vision to form a coherent plan of action or the conviction to muster the necessary wherewithal to follow things through.

Most of the time, this is why we’re not as successful as we’d like to be. It’s why we haven’t managed to nail our life goals or become ludicrously wealthy. Most of the time, deep down, we know what we need to do. Yet somehow we just fail to make it happen. The appeal of Jocko Willink to us half-arsed mortals is that he represents a simple antidote to our failings.

The image that encapsulates this ethos is Willink’s Timex with the screen frozen at the same ungodly hour over and over again. What the watch is telling you is to defy the call of the snooze button. Get up! Execute your plan! Take control of your life!

As empowering messages go, it’s simple yet profound. You can take advantage of it, too, Willink insists. Starting tomorrow at 4.30am … 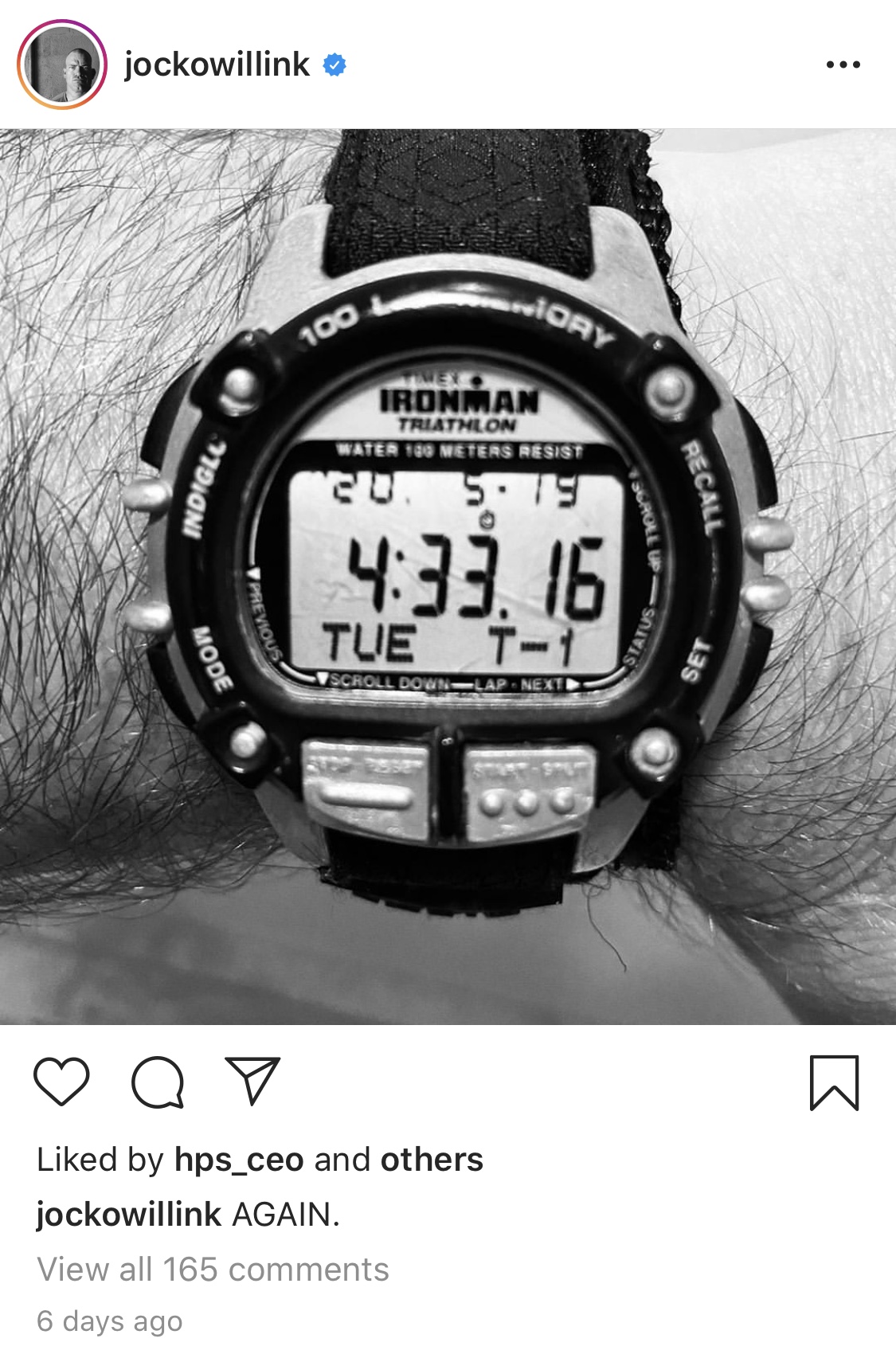