The Tissot PRX Chronograph is finally here, and (spoiler alert) we love it

These introductions usually serve as contextualisation of the watch we’re about to cover. With the Tissot PRX Chronograph, however, I have an inkling that such formalities are somewhat irrelevant. After our brief, near over-excited introduction some months ago, we’ve been eagerly awaiting the release of the bigger brother to the time-only model. Tissot have launched the PRX Chrono into the sparsely occupied space of value-aware Swiss chronographs, with most competition coming within the Swatch Group themselves. Powered by ETA’s own extensively modified Valjoux movement, the PRX Chrono is a cracker on paper. Let’s see how it holds up in the metal.

Things are not quite as they seem dial-side

In the past, Tissot has paired its Valjoux-powered chronographs with a slew of sub-dial orientations, choosing the most classic of all for the PRX Chrono — a triple register layout at 3, 6 and 9. The vertically brushed electric blue dial differs greatly from the stock photos — appearing as a deep, abyss blue in most lighting scenarios. Catch it at just the right angle, though, and the texture and colour pop vibrantly. With a lumed and legible baton handset, the dial doesn’t appear cluttered, as Tissot chose slender hour markers to contrast against the wide hands. Completing the package is a silver, circularly-grained minute track that matches the finish of the sub-dial frames. 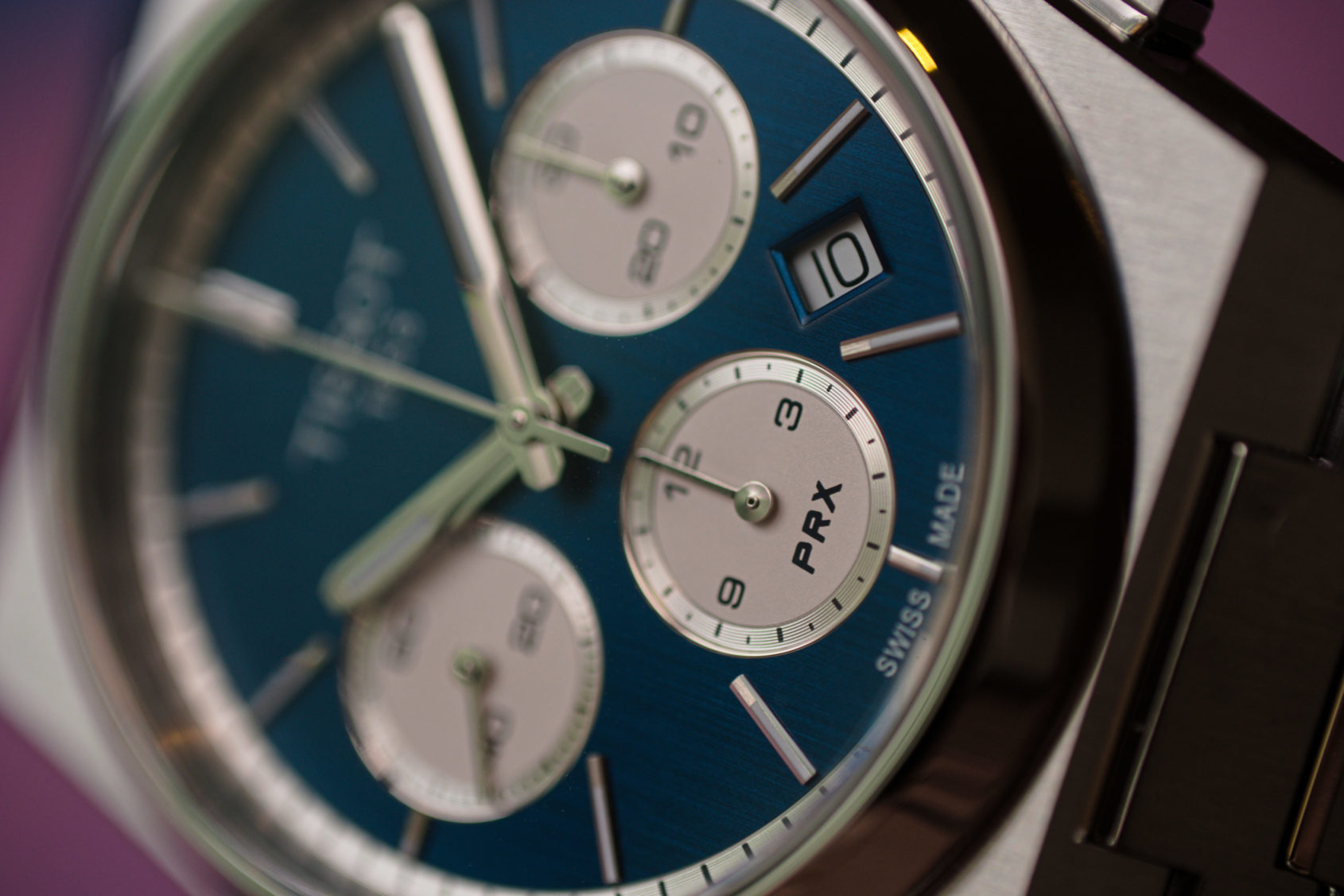 I was pleasantly surprised to see how well the finish holds up under high magnification as well, with crisp printing and smooth edges to the hands. Though I’m one of those no-date-at-anywhere proponents, I was glad to see a chamfered frame to the date window. The circular graining on the outer edges of the sub-dial act as a nice step-down, combining well with the frosted finish of the sub-dials’ inner portions. The aforementioned printing is not only well-executed, but also done with restraint. Tissot avoided overbranding the PRX, choosing a rather subtle script at the base of the hour totaliser. My only wish for the dial of the PRX is a revival of a period-correct logo — just how cool would it be with the square serif ‘T’ logo of the ’70s?

Owing to the increase in the size of the movement, we expected the PRX Chronograph to bulk up in case size … and bulk up it did. With a diameter of 42mm and a lug to lug of 53mm, owing to that non-articulating first link, it’s a proportional increase in size to its 40mm sibling. The most significant size increase, however, is in height and weight. At 15.3mm thick and weighing in at 184 grams, this one is certain to better suit wrists that are 6.5 inches or more. While I could easily get away with it on my 6.1-inch wrist, I had to take out a fair few links from the bracelet, resulting in a top-heavy feel on-wrist.

As for the actual construction of the case, I am once again very pleasantly surprised. The PRX always was an outlier in terms of its finishing for the price, and while the significantly pricier Chronograph doesn’t bring about any notable improvements, there are few things that it could improve on. The polished chamfers cresting the edges of the angular case are as sharp as ever, most noticeable on the wide, sloping bezel. I love the asymmetrical nature the case gets from the rectangular pushers and large crown. 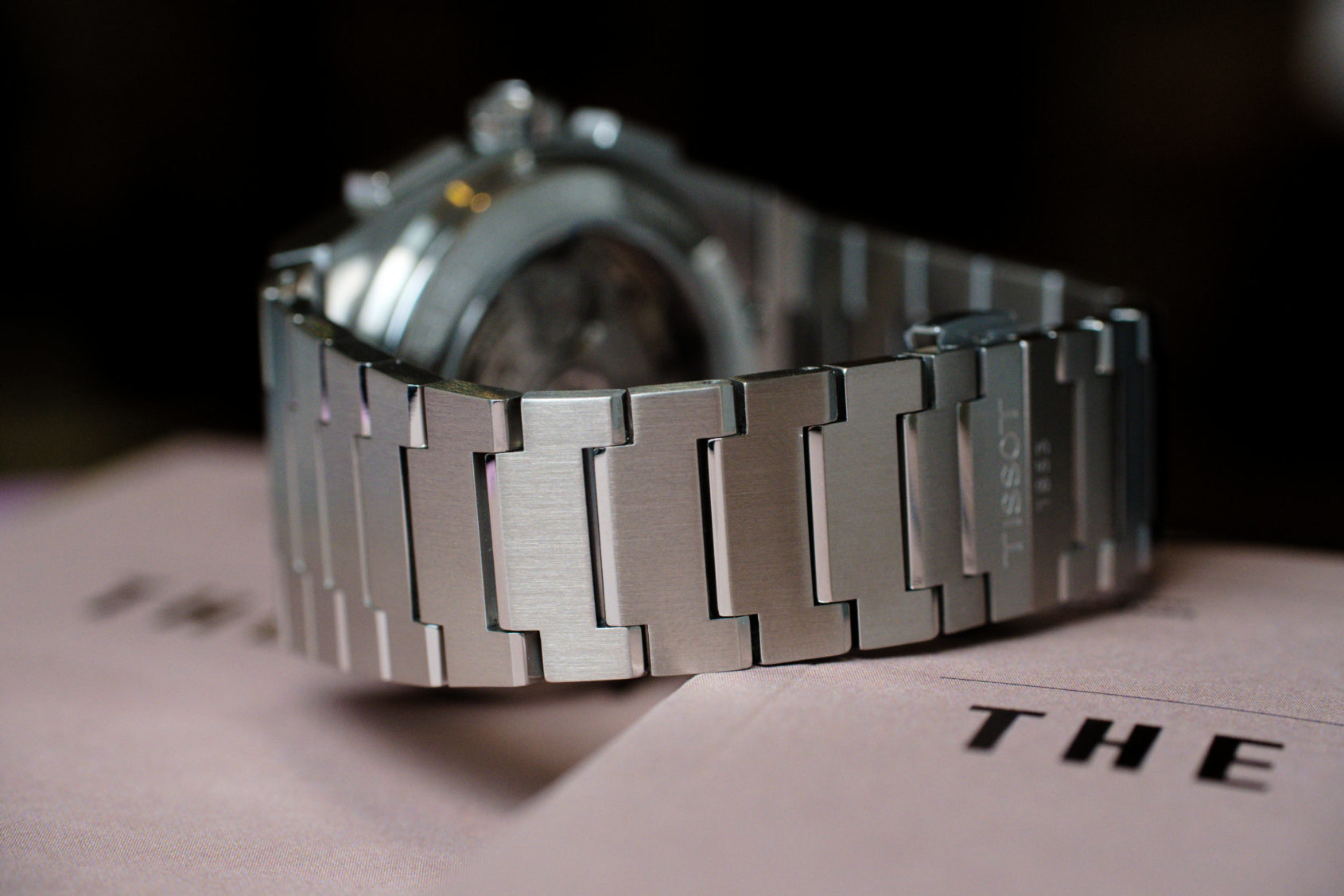 The bracelet continues the if it ain’t broke, don’t fix it trend, though it has been slightly redesigned to suit the larger size of the PRX Chronograph. It’s as comfortable as ever, though, while it also offers several half links to make up for the lack of micro adjustments on the butterfly clasp. At this price point, I wouldn’t object to screws instead of push pins that hold the bracelet together, though if their exclusion helps to keep costs down, I’m all for it. It should be noted that the bracelet retains the quick release seen in previous PRX models. I’m already daydreaming of the PRX Chrono on a wide, thick, supple leathe… alrighty, got to steady myself.

Powered by an icon 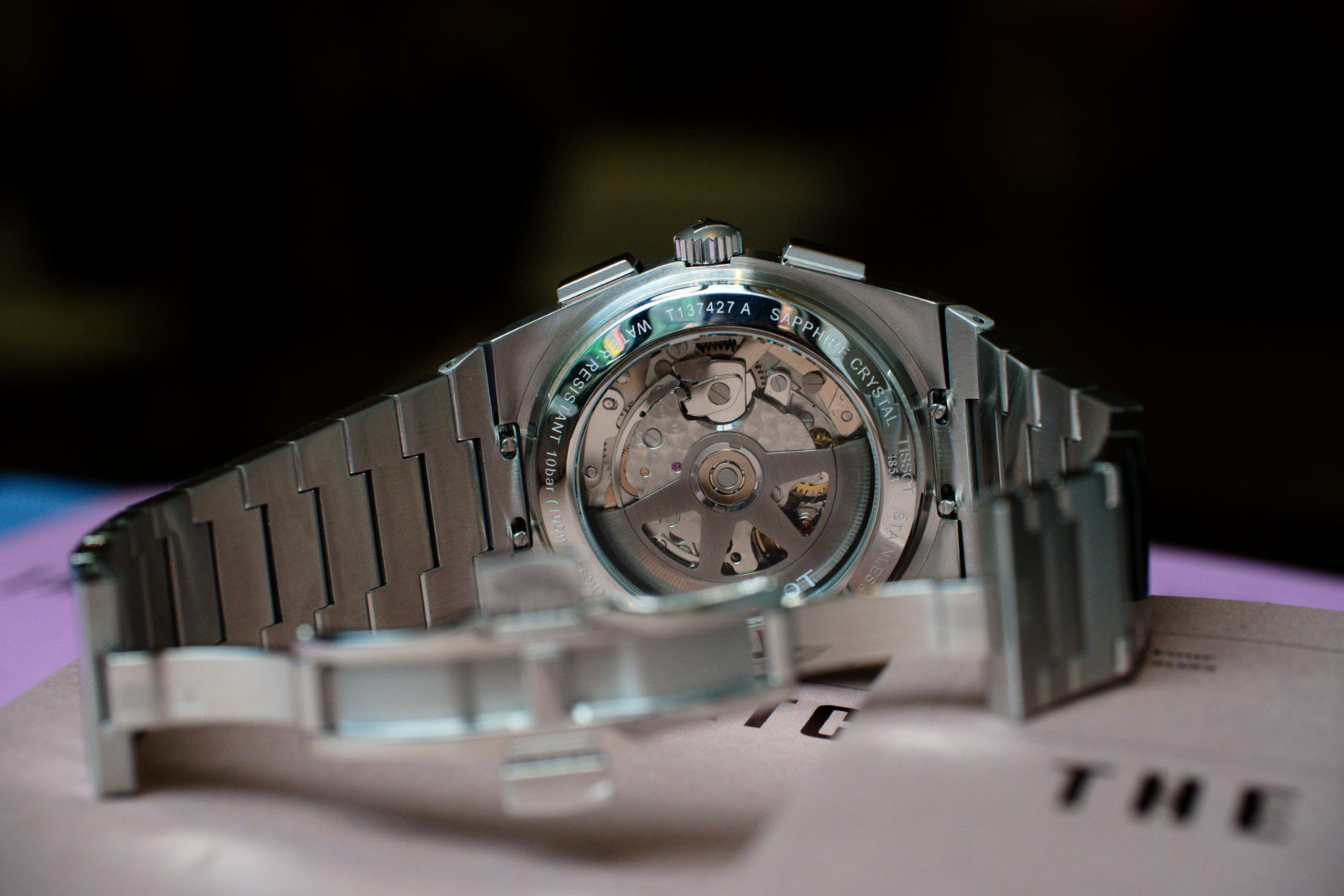 Flipped over, the display caseback gives us a look into the ETA A05.H31 movement — a modification of the iconic, and deserving of that moniker, Valjoux 7750 (7753, if we’re being pedantic). Given a modern look with its dark-finish skeletonised rotor, it has other pleasant finishing with machine-applied perlage, providing a total of 60 hours of power reserve. It’s a cam-operated chronograph, though I’ve no qualms with the smoothness and operation of the pushers — the feel was secure and satisfyingly clicky. One tidbit to note is the lack of a date adjustment position in the crown, as it was relocated to a corrector pusher at 10 o’clock. This isn’t my favourite integration, as depressing it requires a small pin, while also disturbing the clean sides of the case. 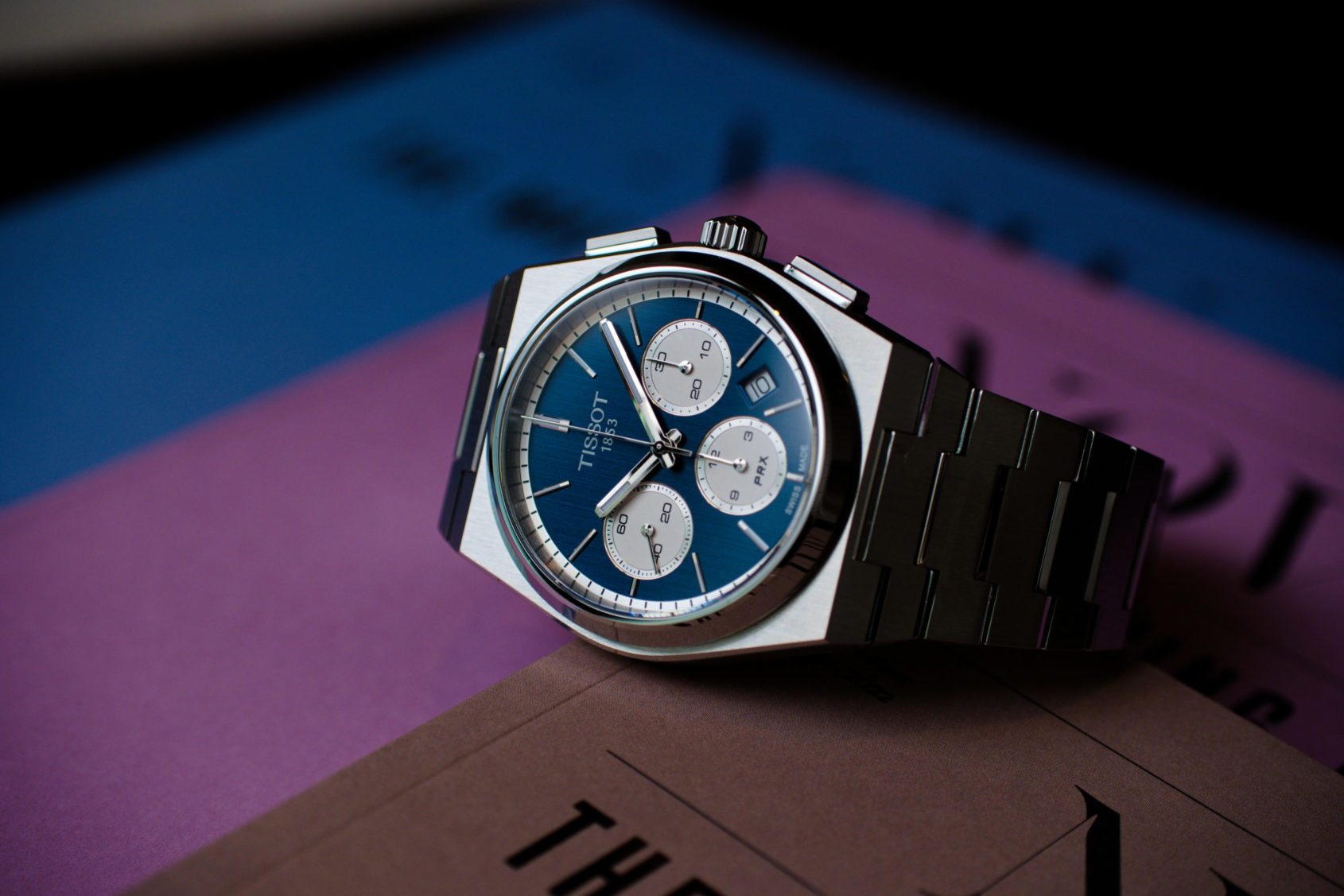 The PRX Chronograph is sure to follow on the success of the three existing PRX lines, and for good reason. It offers a frankly beautiful design, with great construction and a well-specced movement at an approachable price point. Its main claim to fame, however, isn’t simply in its physical features. Like the rest of the PRX family, it’s a desirable watch that you can actually get without sacrificing your first born to an AD, hoping they look down upon you favourably.

The Tissot PRX Chronograph is available for order from Time+Tide. Purchase the blue dial here or the silver dial here. Price: AU$2,775