Although it’s never really taken off as an uber-popular complication like a chronograph or moonphase, the alarm function of JLC’s Memovox watches has, since they were first unveiled in 1968, been exceedingly practical. But it’s a complication that’s usually been found in the watchmaker’s daintier, and perhaps less practical, dress watches. This has meant that one of the sharpest tools in JLC’s shed has remained pigeon-holed, and off limits for those who prefer a sportier, bolder option.

That is, until now. Introducing the Jaeger-LeCoultre Polaris Mariner Memovox, a bulletproof stainless steel diver’s watch that — as its name suggests — houses the brilliant Memovox alarm function. This is an exciting watch from JLC, so let’s take a closer look. The top-line development here is that this model – a boutique only exclusive in Australia – blends two of Jaeger-LeCoultre’s worlds in one watch. The borderline aggressive sportiness of the Master Compressor range, for example, with the refined, superbly finished elegance of the current Polaris range.

If the existing Polaris range went to Oxford for a second degree after attaining their first, this sibling went to the gym.

If the existing Polaris range went to Oxford for a second degree after attaining their first, this sibling went to the gym. Then it went free diving. If you’ve sought a little more swagger, a little more muscle (it is, as you will find, not lacking in the heft department) this is 100 per cent the model for you. And it will change what you think of Jaeger-LeCoultre, and their seriousness about shaking things up in releases to come. It’s exciting. 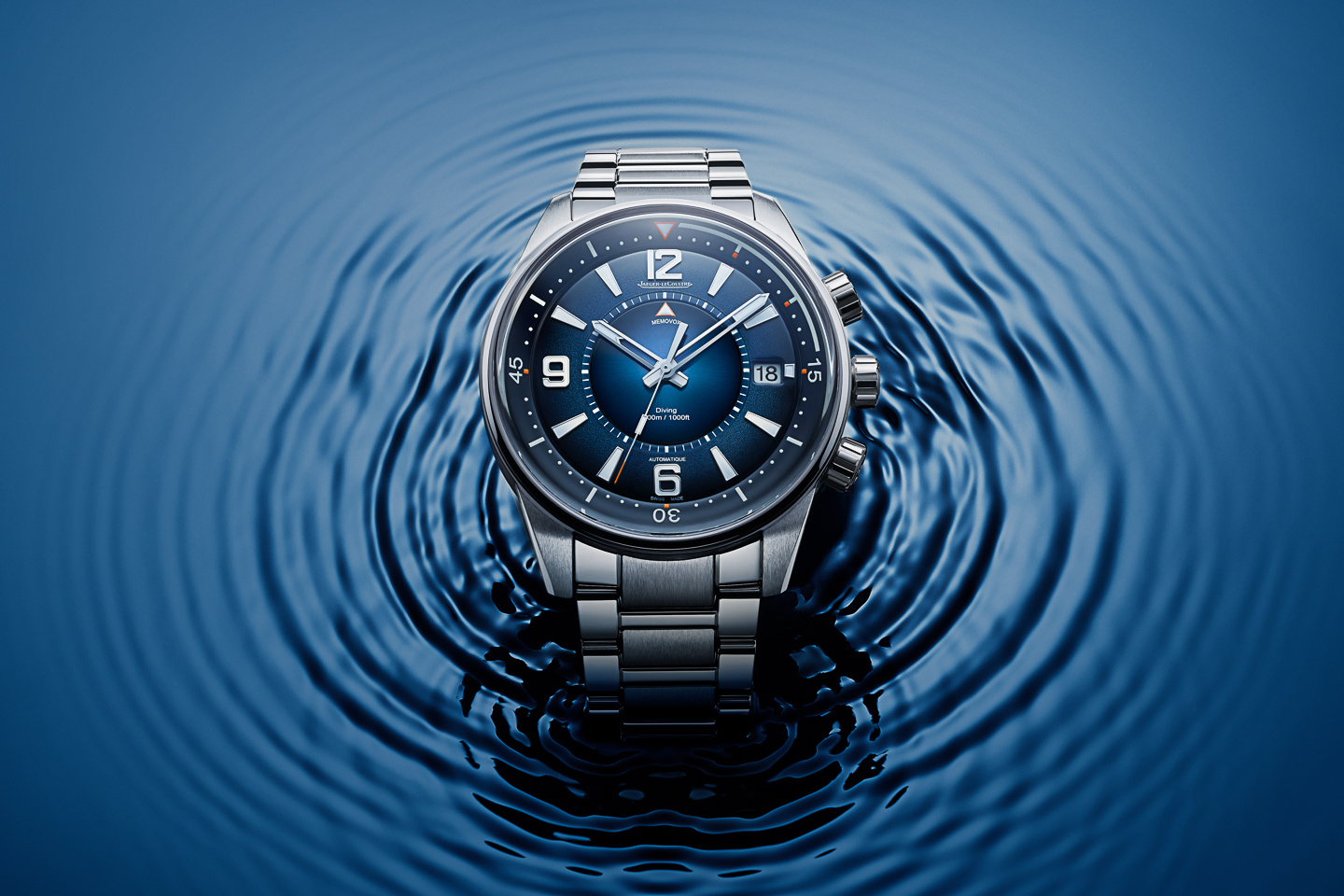 It may well be a dedicated tool watch that’s capable of 300 metres of water resistance, but the 42mm x 15.63mm stainless steel case, according to JLC, walks a tightrope between sportiness and elegance. And it nails the death-walk. The multifaceted case finishing, short, curvaceous chamfered lugs and inoffensive spherical body give wearers an impression of opulence and a dynamic go-anywhere spirit. The three crowns attached to the case’s right flank, at two, three and four o’clock — which control the alarm, inner unidirectional rotating bezel and time and date respectively — further enhance the real-world usability of the timepiece, as well as punctuating its sporty intent. And, for the first time in a JLC Memovox dive watch, the Mariner is sporting a sapphire crystal caseback, as well as a front-facing, domed sapphire crystal. 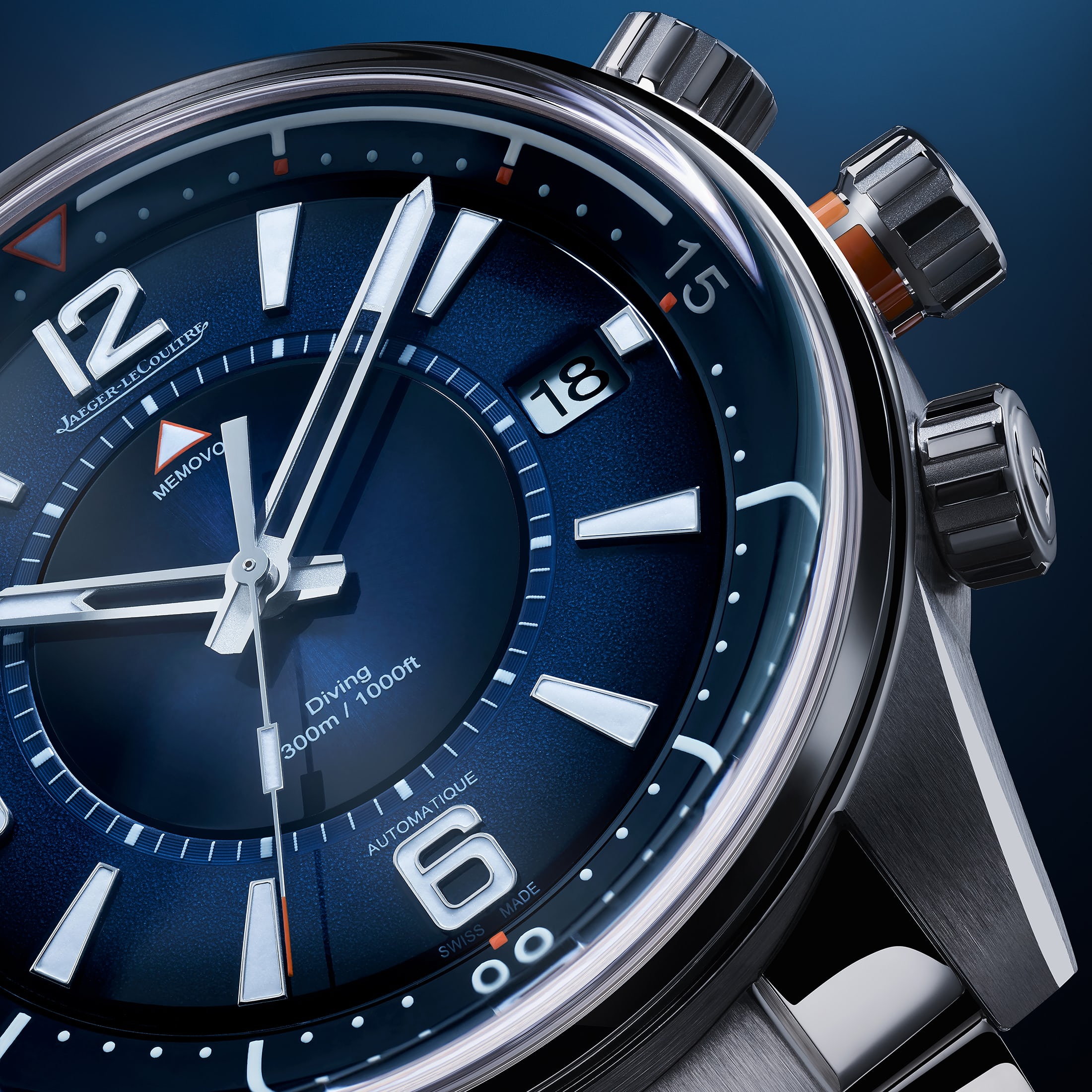 Calibre 956 is a pretty prolific movement in the world of horology, and can trace its roots all the way back to the first Memovox calibres of the ’50s. First launched in 2008, the self-winding masterclass has undergone several improvements in the 12 years since its inception, and whether it be performance or finishing, it’s exactly what you’d expect from the “watchmaker’s watchmaker”. These features include a 15 per cent overall thinner movement, thanks to a new peripheral gong, 23 jewels, 28,800 vph and 45 hours of power reserve, as well as a gorgeous skeletonised oscillating weight that features both the JLC motif and Côtes de Genève decoration, which complements the various other components of the movement. 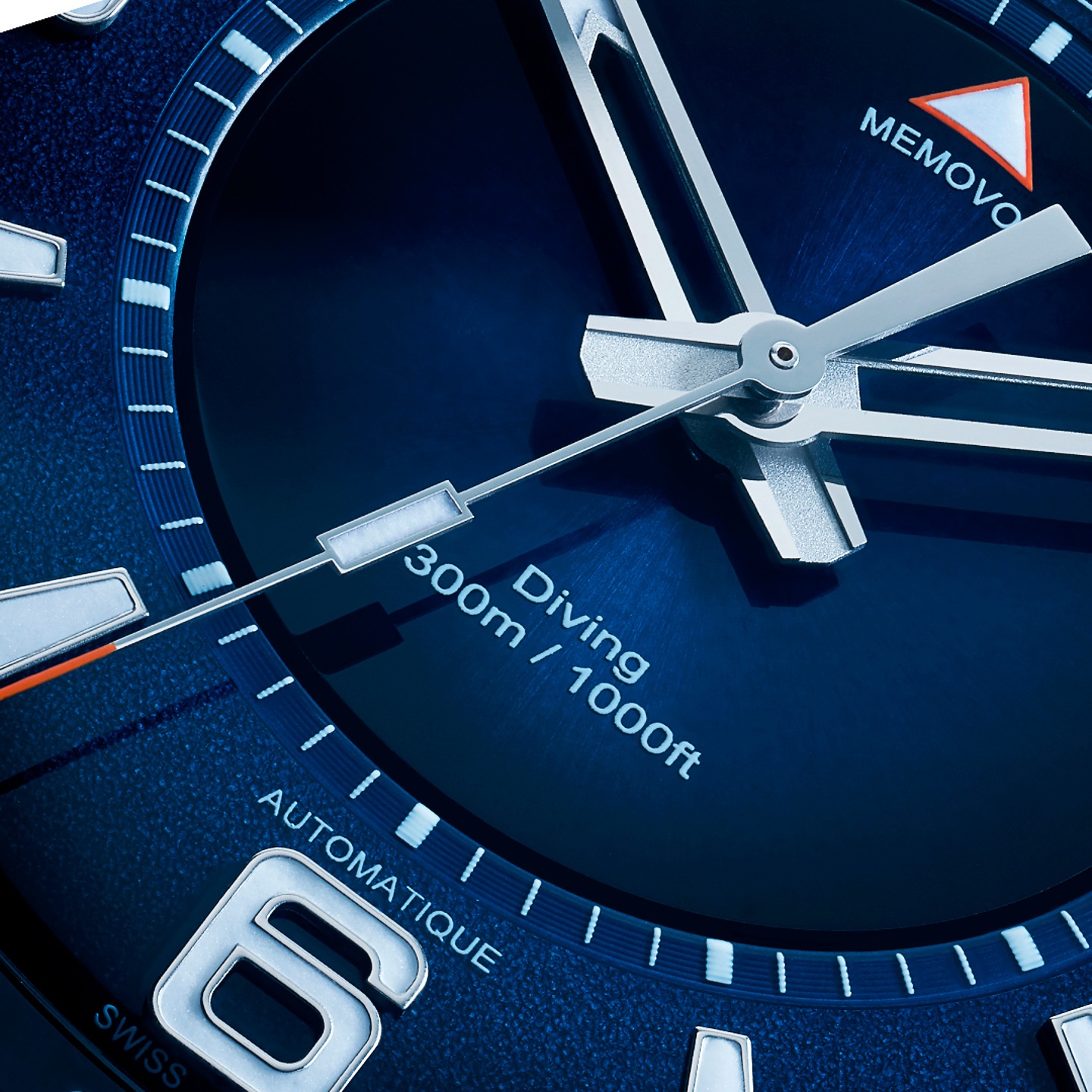 The gradient-blue dial of the Mariner Memovox is nothing short of stunning, with three distinctly different concentric circles creating a profound overall aesthetic. The inwardly concaved rotating bezel is a flat, opaline inky blue that’s contrasted with white highlights and splashes of orange that make for a sweet combo. Inside the bezel is a granular, stunning dégradé-style surface that sees colour bleed from its centre. A diminutive, concentrically patterned railway track sits inside the gritty central ring, and inside that is a handsome sunray brushed blue central disc that’s contrasted with the bright orange centring arrow of the Memovox function. Couple these attributes with the trapezoidal indices and bold numerals at 12, six and nine o’clock, as well as a razor-sharp, semi-hollow pencil-style handset, and you’ve got a dive watch with one of the best dials in the game. 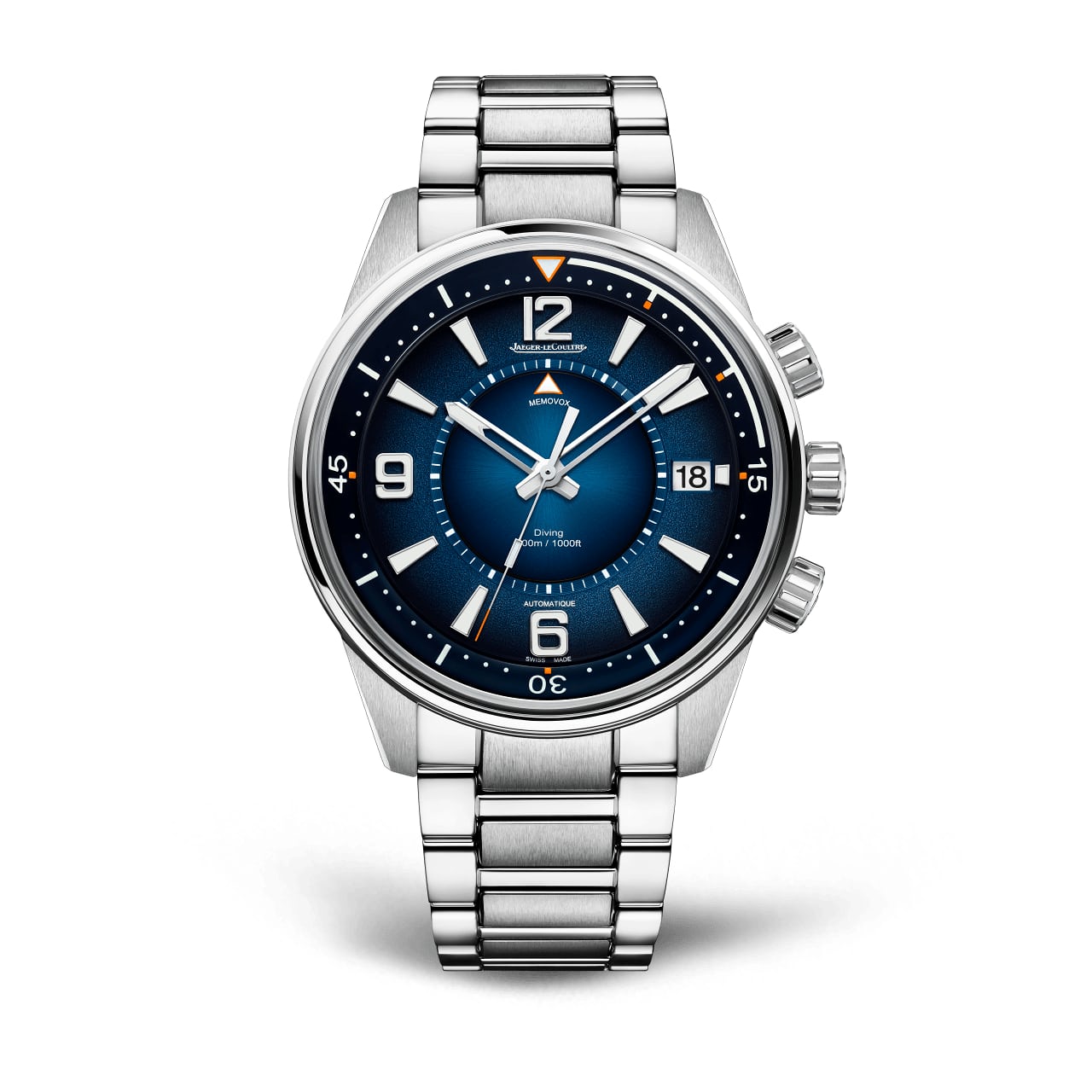 The luxury steel dive watch has been paired with a stainless steel tri-link bracelet that impeccably balances the predominant ambiance of the timepiece. The central links are vertically brushed, providing great continuity with the lugs and also giving a tough utilitarian look that needs to be present on any good sports watch. The outer links, on the other hand, are highly polished and match the bezel and the chamfered edges of the lugs. The resulting juxtaposition is a finely balanced appearance that will ensure the Polaris looks right at home on the wrist of someone in a boardroom, or the bedside table of a six-star hotel.

Finally, JLC has created a modern dive watch equipped with the Memovox movement. The Jaeger-LeCoultre Polaris Mariner Memovox presents as a unique offering in the luxury dive watch space, and if you’re thinking about purchasing one of this watch’s more traditional contemporaries, I’d think again.

The Jaeger-LeCoultre Polaris Mariner Memovox, Ref. Q9038180, has a recommended retail price, in Australia, of $27,300 and is available from JLC boutiques and authorised dealers.