Editor’s note: When it was first released back in 2015 (was it four years ago already?!), the IWC Portugieser Annual Calendar was hot. And while there’s been a lot of watches (including many more Portugiesers), the years have not diminished the appeal of this big business watch.

The headline act in IWC’s 2015 line-up is the Portugieser Annual Calendar, an assured new take on an old favourite.

Will people want a watch that’s more than a complete calendar, but not quite a perpetual? 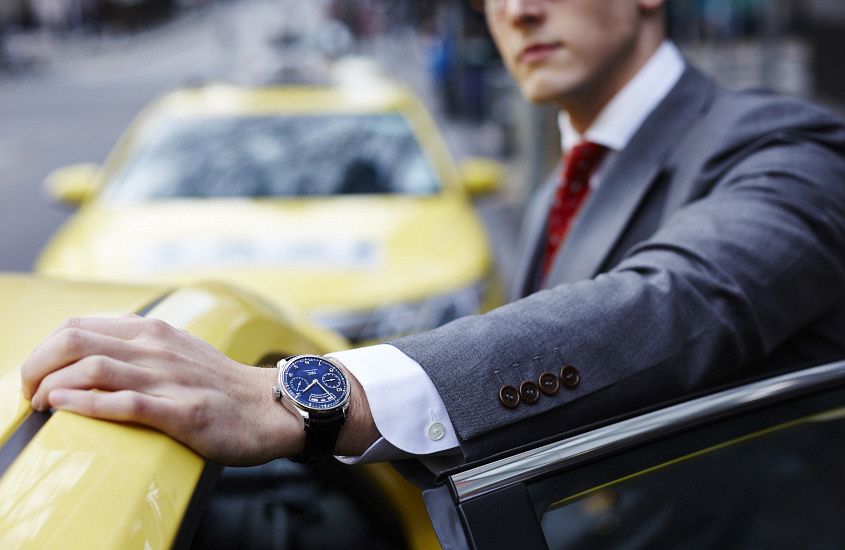 IWC have declared 2015 to be the year of the Portugieser, and the star model in the fully revamped (and re-branded) line is the Annual Calendar. The Annual Calendar is a big, beautiful watch featuring the brand’s first ever annual calendar complication, and a brand new in-house movement. 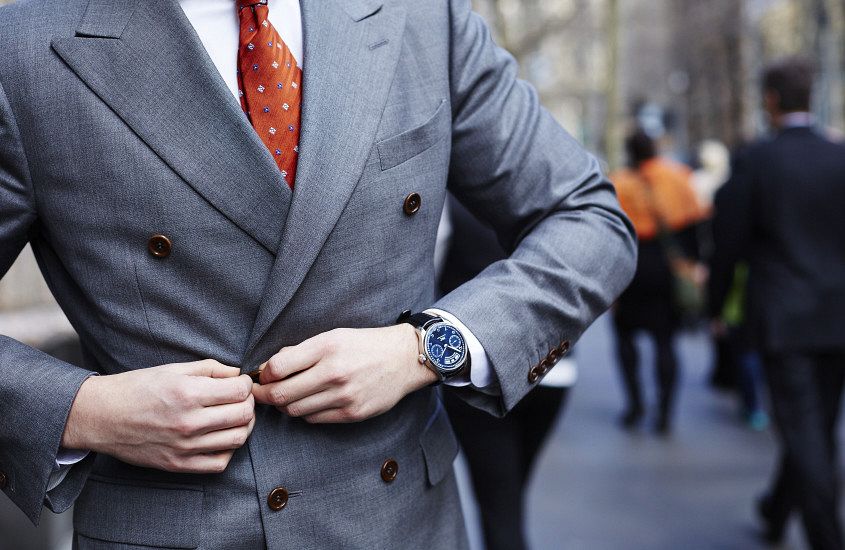 This is an impressive watch on many levels, and paradoxically, the greatest thing about it is perhaps the hardest to articulate. The best description I can come up with after wearing it for a week is that the Annual Calendar has a strong personality. Some watches can have all the right stuff, yet still come off cold and calculated. Not so this Portugieser, all the elements (and even some of the quirks) come together to create a watch that you can’t help but enjoy wearing. And (spoiler alert) that’s what makes it such a good watch. 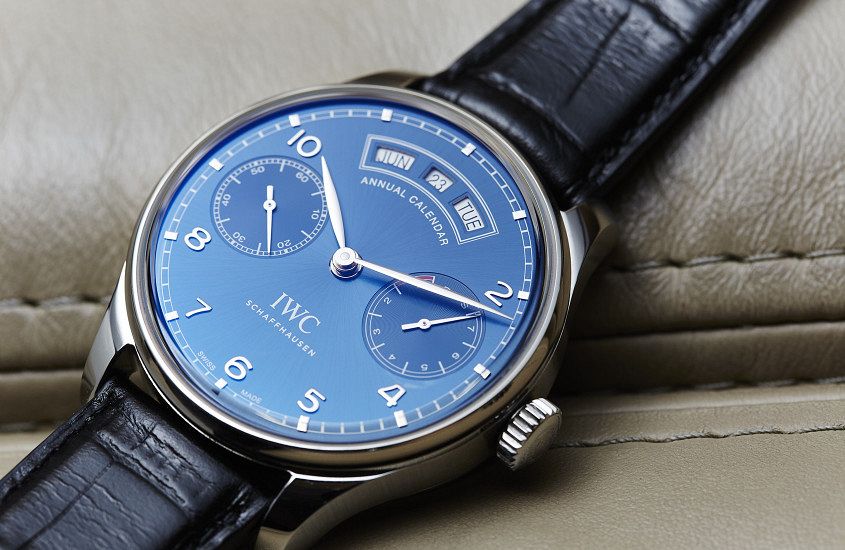 There’s no escaping that the Portugieser is a beast in terms of its size. For something sporty, the 44.2mm case width might slide under the radar; however, given the dressier looks of the Portugieser, that proportion places it firmly at the top end of the size spectrum. That’s OK though – the bold, contemporary (yet historically accurate) size is a large part of its appeal. If the same watch clocked in at 38mm it would be a completely different (and I suspect much less appealing) proposition. 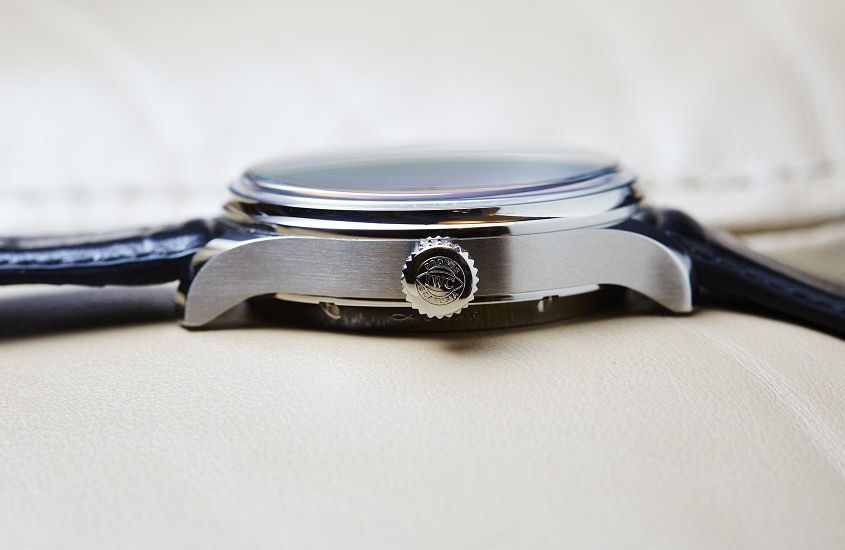 What’s good to see, though, is that even though it’s big, IWC have gone to considerable effort to ensure it’s more beauty and less beast. The crystal has been upgraded to a high-sided glassbox sapphire, giving the dial a deeper, more balanced appearance. The thin bezel is concave, a clever bit of optical trickery that makes the case appear slimmer. 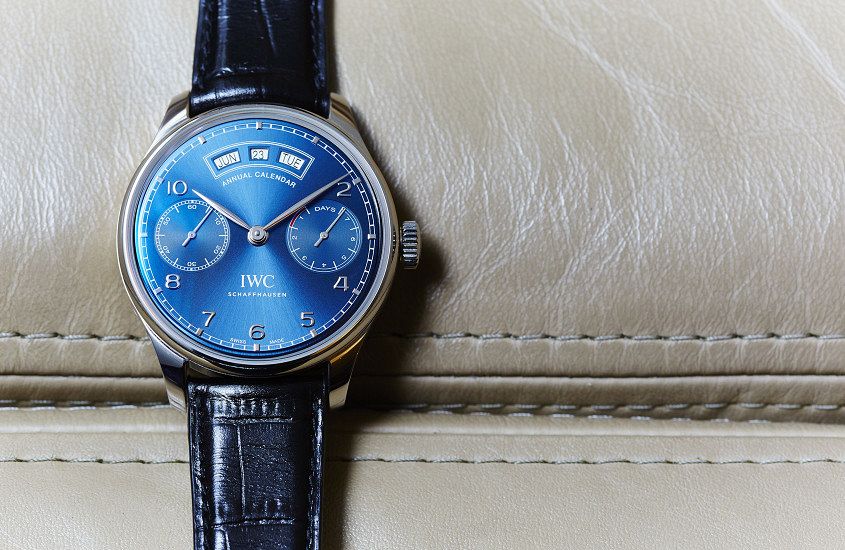 When it was announced prior to SIHH this year, it was the dial of the Annual Calendar that attracted the most comment and criticism. The criticism wasn’t directed towards the rich blue sunburst dial, which is a thing of beauty and will be a surefire hit. Nor was it aimed at the feuille hands and applied Arabic numerals that are so iconic on the Portugieser line. Rather it was the implementation of an annual calendar complication itself that was the focal point of debate. The main issues are the month/date/day layout, and the fact that the dial reads ‘Annual Calendar’. Naturally, IWC have explanations for both these decisions. According to them the date layout follows the American style to honour F.A. Jones, the American founder of IWC. I’d buy this explanation if the date layout was day/month/date, but I’ve never heard anyone (American or otherwise), say the date as June 23rd, Tuesday.

I am more convinced of IWC’s rationale behind the ‘Annual Calendar’ text. While it might at first glance seem redundant there’s actually a good reason for it being on the dial. An annual calendar complication automatically corrects the date for months with 30 or 31 days. You only need to pull out the crown and flip the date over at the end of February. It’s a cut above a complete calendar that requires manual adjustment at the end of every 30-day month. So from this perspective the text differentiates this model, with IWC’s new movement (of which they’re justifiably proud) from less complicated competitors. 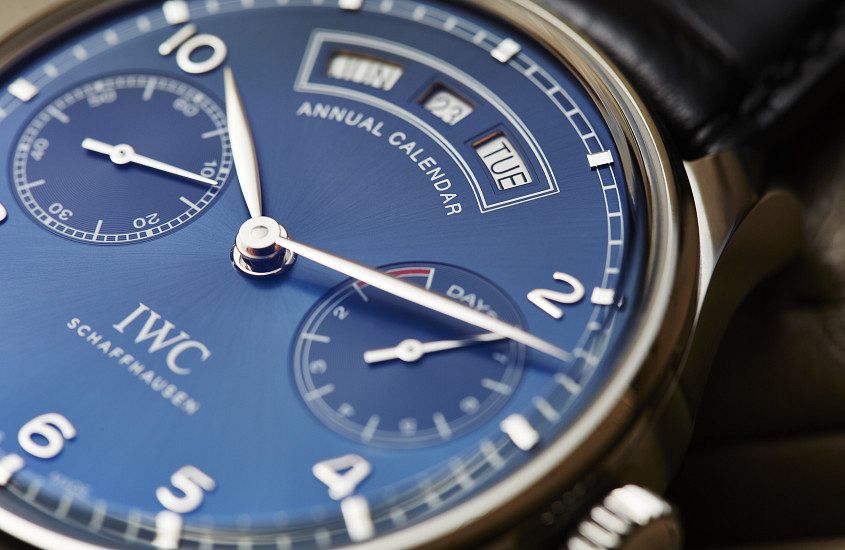 Regardless of what you think of the text and layout, I don’t think many people would say that the calendar doesn’t look good. The three apertures are framed in a broad arc (which, looked at from the right angle makes for a very smiley watch) quite unlike any other date display. There is plenty of space on the dial to accommodate the calendar in a well-balanced manner, and the unusual display adds a great deal of charm to an already appealing watch. After a week of wearing the Annual Calendar it would now be my Portugieser of choice – by a long margin. 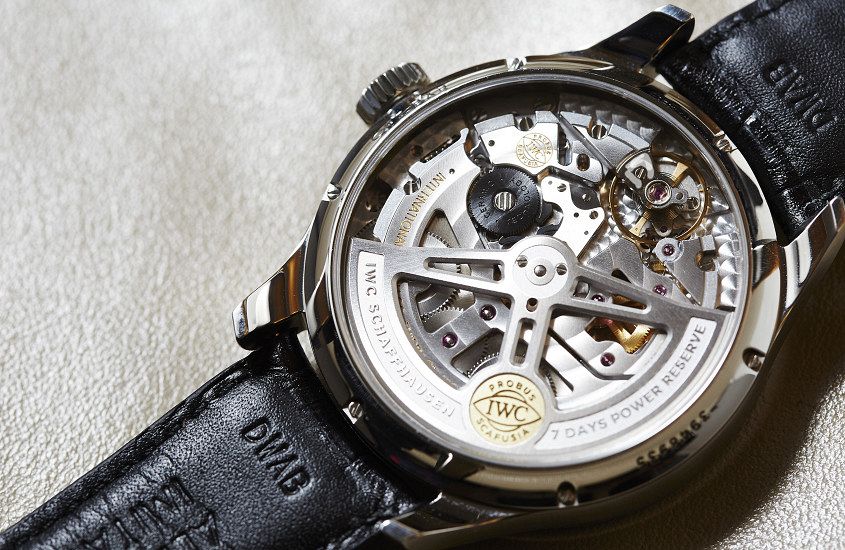 At the heart of this watch is the movement. Of course the movement is usually at the core of a watch, but in the case of the Annual Calendar it’s more than that. The watch is powered by the Calibre 52850 – and is IWC’s first movement with an annual calendar complication. As I mentioned earlier, an annual calendar represents a significant technical step up compared to the more common complete calendar complication. While this is a noteworthy achievement, it is not the main reason why the Cal. 52850 is important. It’s important because it’s part of IWC’s next generation of big in-house movements, the 52000 series. 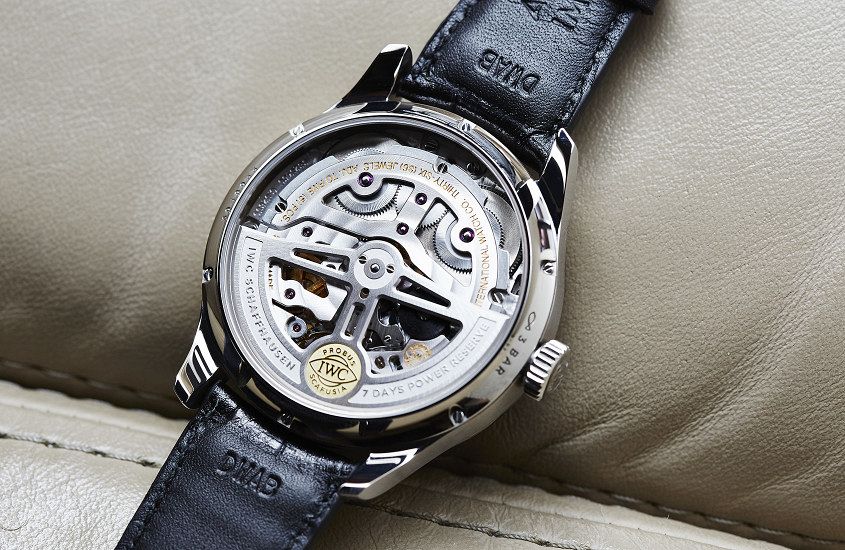 Investing in a new movement isn’t a decision that a brand takes lightly; each movement represents a huge investment of time and money. So IWC are hoping that the brand new 52000 will pay off. And while from the dial side a Portugieser with the new movement looks practically identical to one with the older Calibre 5000, the reality is that this is a significant upgrade. Beat rate is increased to 4Hz; an extra barrel has been added for stability and to guarantee the seven days of power reserve. The winding wheel and pawl, as well as the rotor bearings, are now made from ceramic. This is because over the last 10 years IWC noted higher than acceptable wear in these parts on the old movement, and their solution is to integrate hard and slick ceramic components for the first time. In addition, the rotor has been redesigned, and the architecture has been reconfigured to show off the movement. The overall finishing has been significantly enhanced. The resulting movement is technically impressive and visually beautiful.

The bigger picture here is that IWC are preparing for the future. They’re significantly expanding their watchmaking facilities and scaling up in-house capacity. The Cal. 52850 is an important step in this process. It’s a movement that adds to the brand’s prestige, and will also serve as a flexible base for whatever modular complications they might develop in the future. We can expect to see a bigger focus on in-house movements, both simple and complex coming out of Schaffhausen in the years to come. 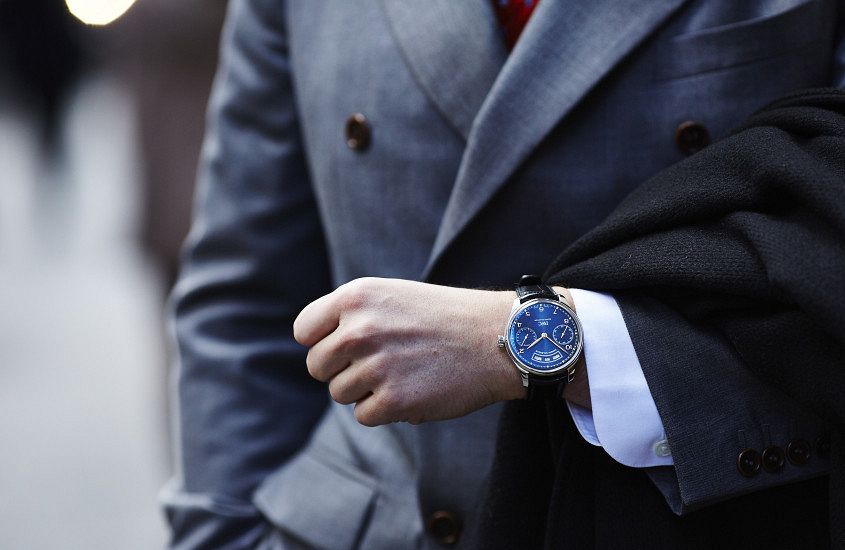 My first impression of this watch was that it was big. Like, sports watch big. Non-watch friends noticed it on my wrist and were impressed by the beautiful dial and large expanses of polished steel (my watch friends were more impressed by the movement). The Portugieser makes a statement just as loud as any Hublot or Panerai, though for all its bulk it speaks a more elegant language than either. And while I had to get used to the size (especially the size in the context of a dress style watch), the dial was love at first sight. I’m a big fan of blue watches because they can be conservative and yet not devoid of personality, and the dial on the Annual Calendar is one of the best I’ve ever seen. And it looks just as good from behind. The depth of the movement and the quality of the finish are really shown off in the best possible light behind the expansive sapphire display back. The combination of wrist presence, good looks, and great mechanics makes the Portugieser Annual Calendar a compelling proposition. 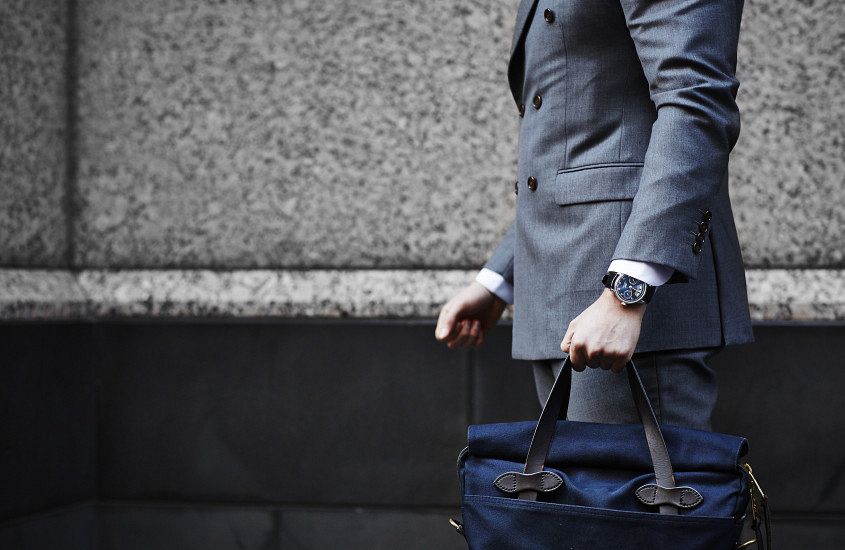 Does the new Cal. 52850 justify the high sticker price, or are you better off holding out for a perpetual?

The Portugieser is a go-to watch for the contemporary corporate warrior, and while the entry-level pieces are very popular, someone wearing this distinctive blue-dialled Annual Calendar will stand out from the suited pack.

It’s an obvious answer, but it’s really the only answer. The date. I would love this watch so much more with a day/date/month display.

The blue-dialled Portugieser in steel has a retail price of $29,100