What’s the biggest difference between Patek Philippe and Audemars Piguet? For me, while both manufactures embody the best of traditional watchmaking, Audemars Piguet does a far better job of re-interpreting their tradition towards modern sensibilities and bringing their creations to a younger demographic. It’s the 50th anniversary of the AP Royal Oak this year, and we saw Audemars Piguet bring the aesthetics of the modern Extra-Thin “Jumbo” closer to the original 1972 design than ever before. But today we have a fresh vibe and aesthetic in the Royal Oak line thanks to AP collaborator and jewellery designer Carolina Bucci. 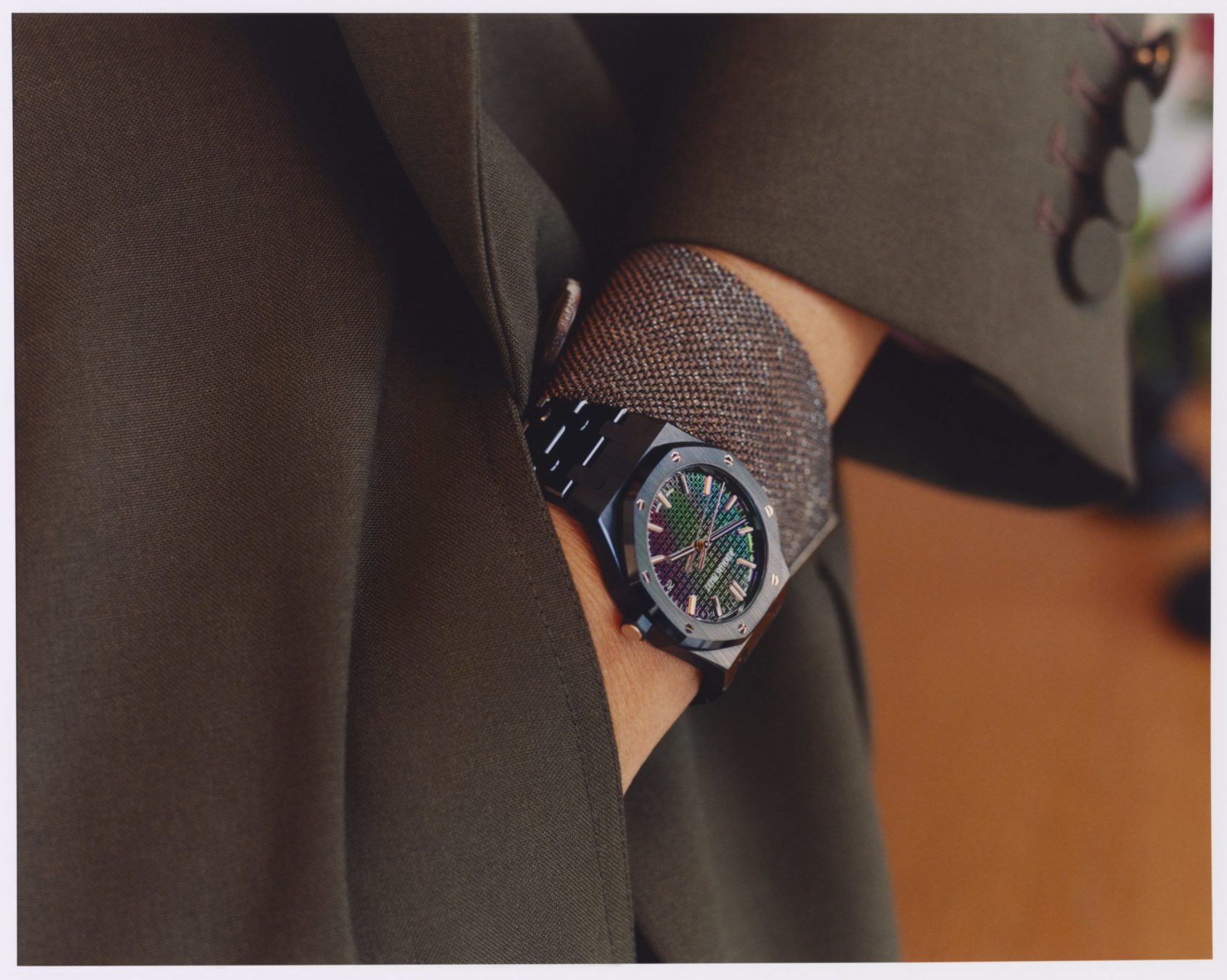 While previous collaborations leveraged frosted gold cases, this time around we have a much more stealth look thanks to the black ceramic and bracelet. That being said, this moodier backdrop serves to make its iridescent rainbow sapphire dial pop that much more. It is a really clever way of incorporating a rainbow aesthetic, a popular look amongst watch collectors, that has me wondering: is the new Audemars Piguet Royal Oak Selfwinding 34mm Carolina Bucci Limited Edition the best rainbow watch design ever made?

A subtle yet striking rainbow effect 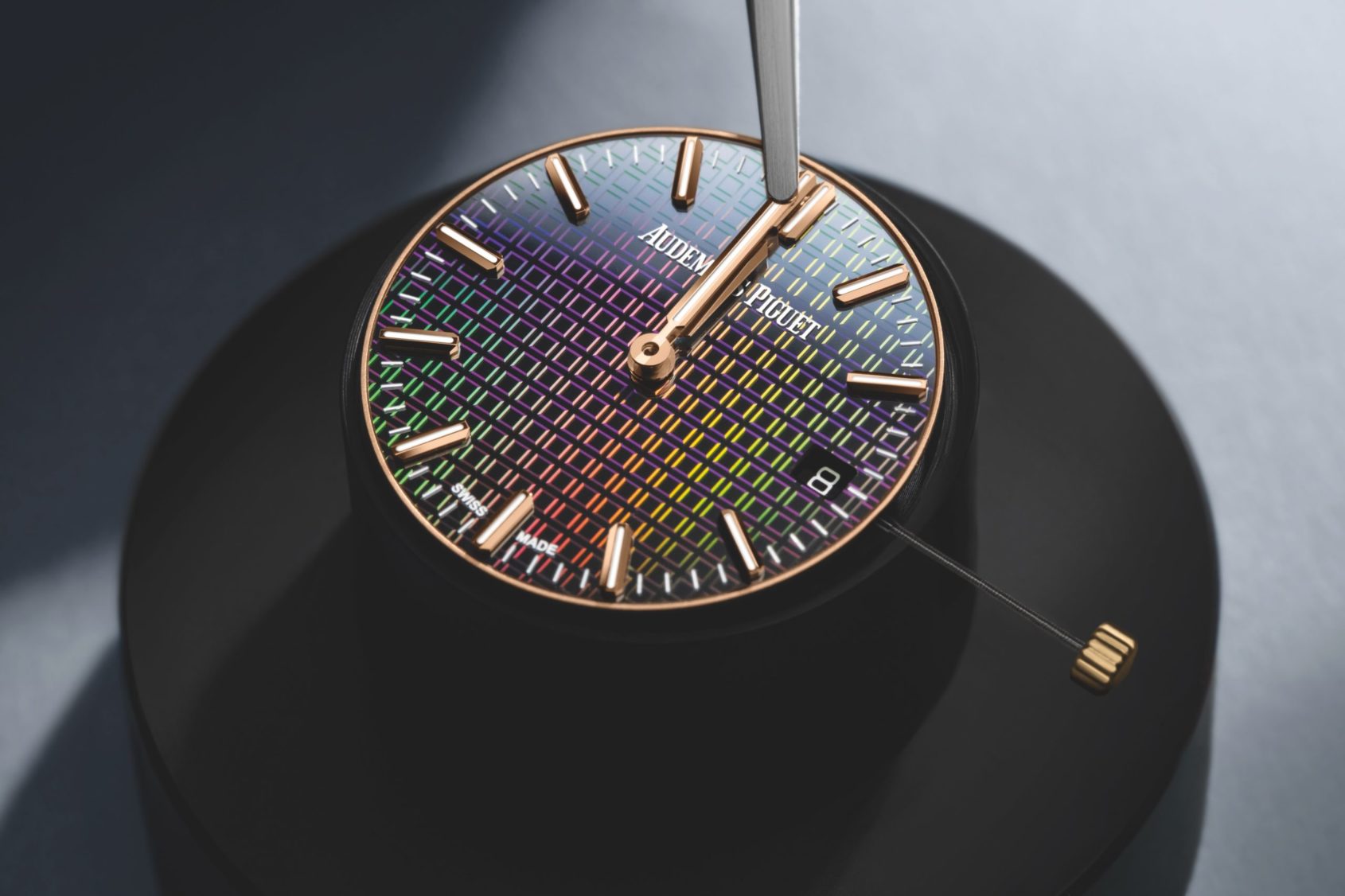 To answer this question, we have to dig into the manufacture of the dial. Audemars Piguet explains: “At first glance, the dial appears black, but on closer inspection it reveals a multi-coloured spectrum that brings the Tapisserie effect to life in the ever-changing light. To reach this result, a sapphire plate adorned with little squares achieved through micro-structuring is added on top of the brass dial plate to create rich rainbow-coloured plays of light. A golden metallisation, specially developed for the occasion, is also applied onto the back of the sapphire plate to create a mirror effect and shines light onto the dial. The pattern of iridescent colours varies from dial to dial, making each design unique.” 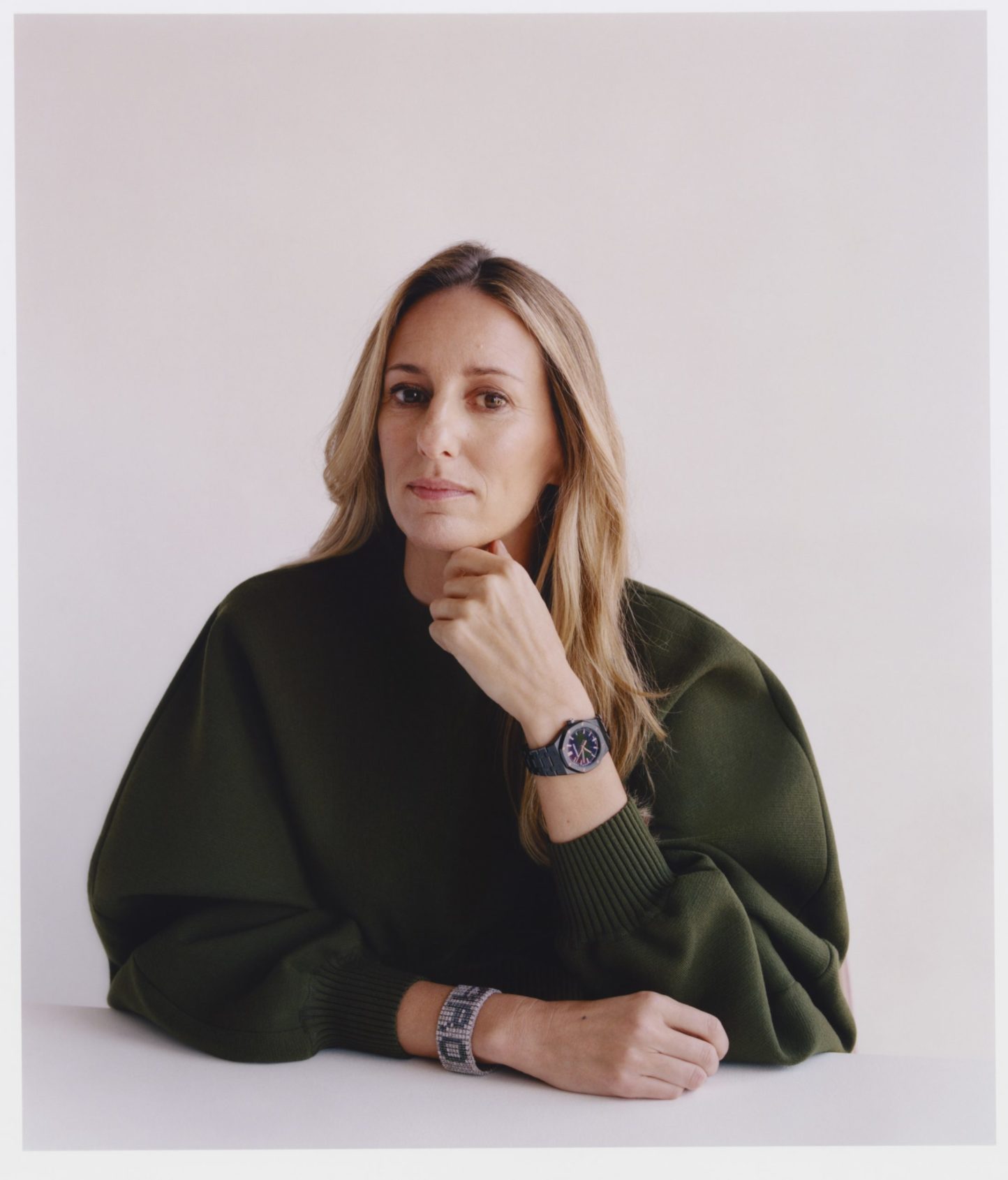 “I wanted to place a rainbow in the most unexpected of places, a little like when you see oil floating on a puddle in a city street… So here you have every colour of the spectrum on a canvas that is completely black, which is itself the absence of colour.” – Carolina Bucci, Jewellery Designer 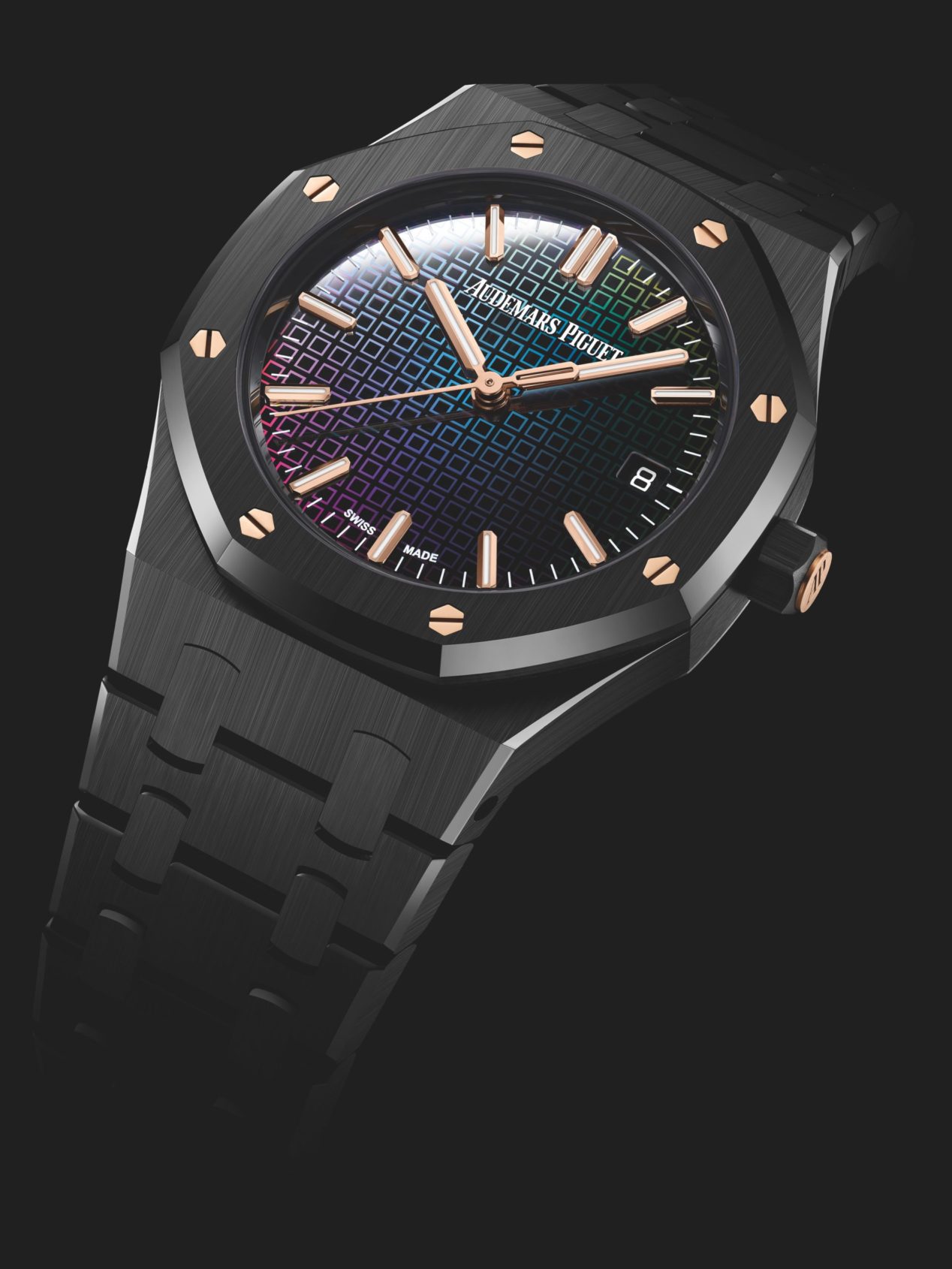 What really hits home for me is the balance at play here. It is largely the same Royal Oak we are already familiar with, externally speaking every bit the same as the Royal Oak Selfwinding 34mm Black Ceramic I was already a big fan of. It carries the same 34mm x 8.8mm dimensions, pink gold accents on the hands, indices, and bezel screws, and the same exquisite case and bracelet finishing comprised of rich vertically brushed lines and mirror polishing to the sharp bevels and articulating facets. The dial even leverages a Tron-like modern take on the Tapisserie pattern, a tribute to the signature dial texture of the Royal Oak. But its novel usage on a sapphire disc, as well as the unexpected iridescent rainbow hue, brings it comfortably out of the standard AP Royal Oak playbook. The result is a rainbow aesthetic that is neither too safe nor too bold, a harmony of familiar and fresh elements only a trained third eye like Bucci’s could offer. 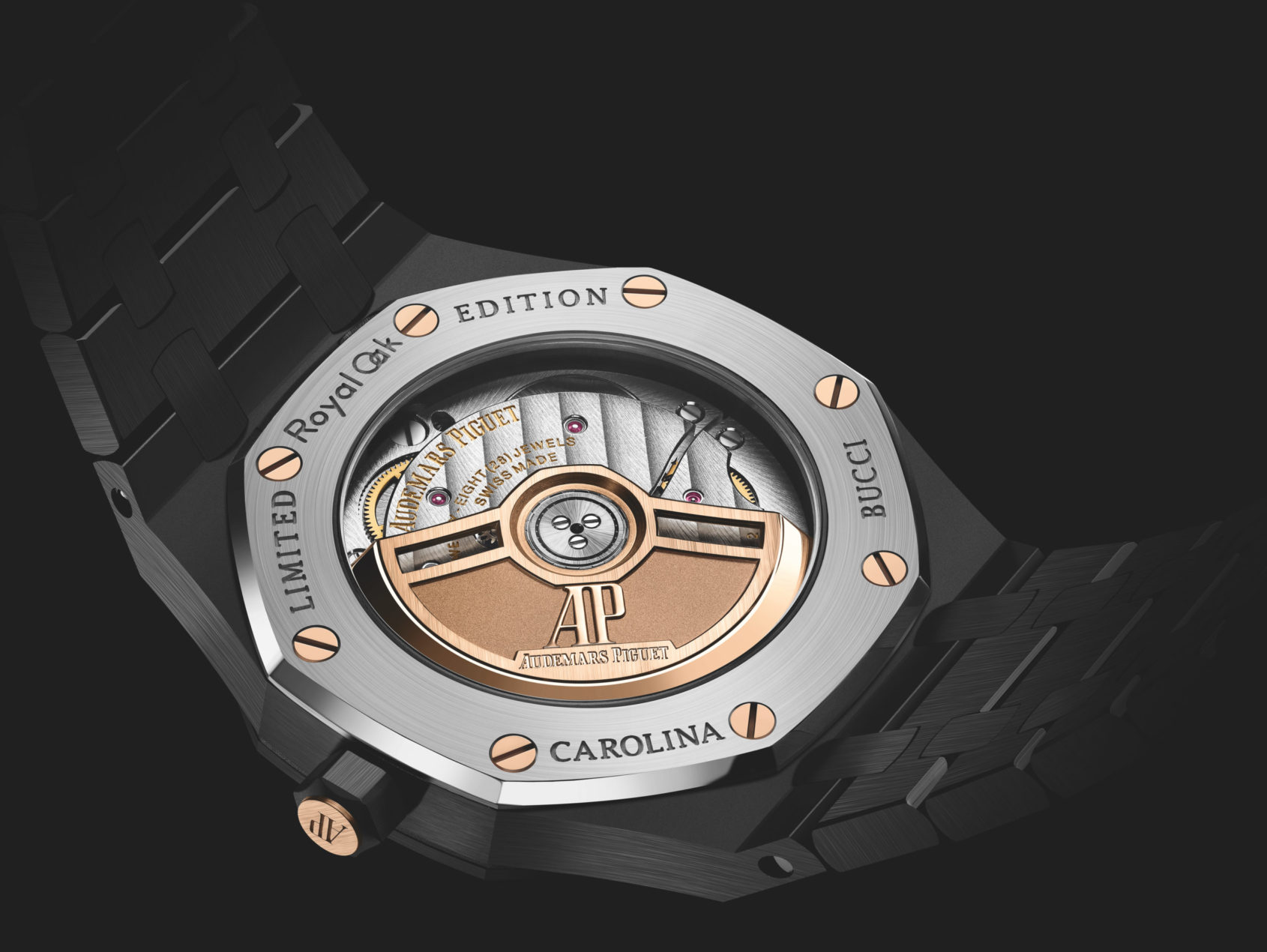 While it is her tribute to the 50th anniversary of the Royal Oak, the new AP Royal Oak Selfwinding Carolina Bucci Limited Edition does not have a 50th anniversary winding rotor. Like other 34mm designs, the watch is powered by the Vaucher-based automatic calibre 5800 – decorated to Audemars Piguet’s high standards and offering 50 hours of power reserve.

So… is it the best rainbow watch ever made? 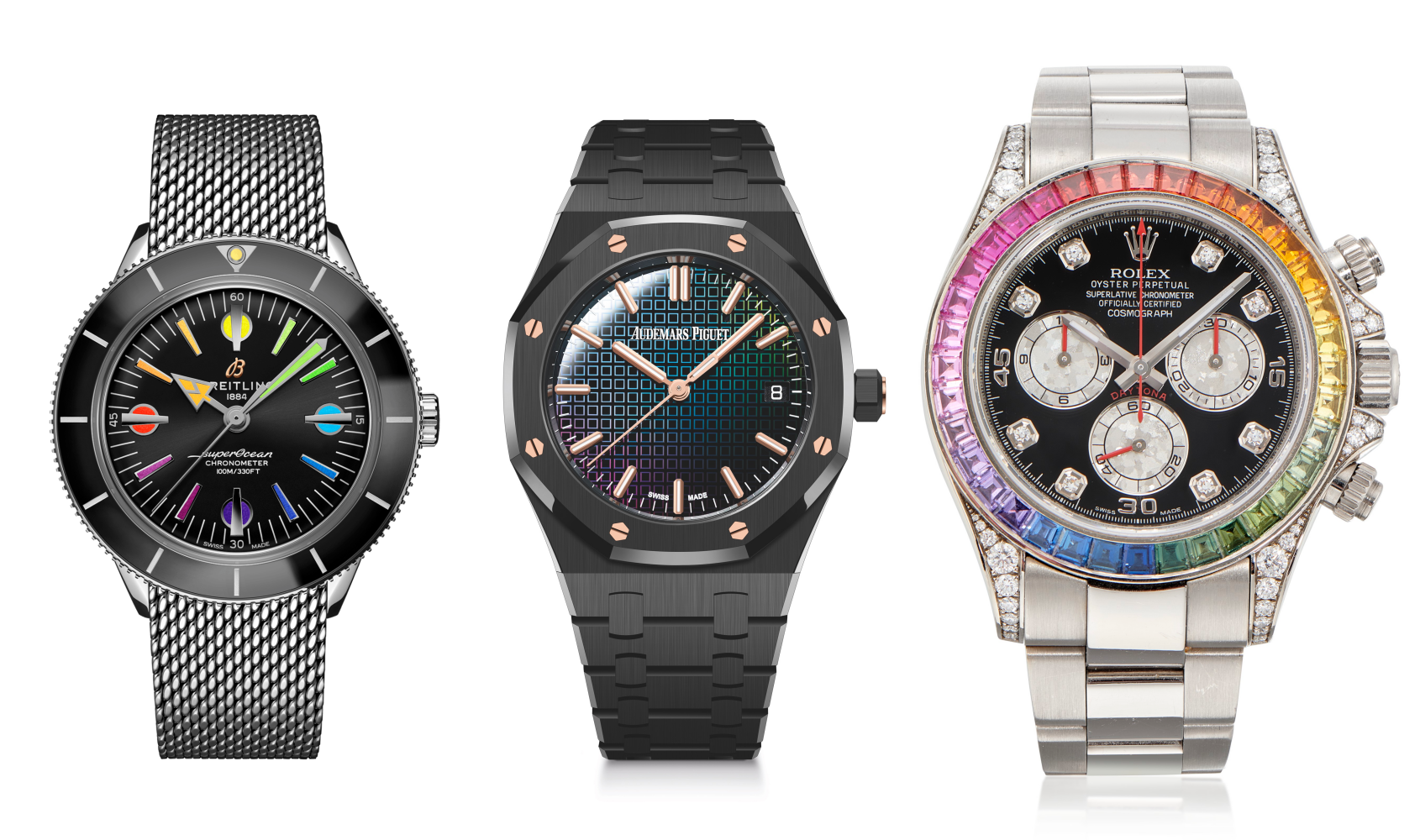 The goldilocks analogy is all too familiar, but it really describes how and why this rainbow release has such an impact on me. There have been rainbow designs, such as the limited edition Brietling Superocean ’57 with rainbow-coloured indices that, while nice in appearance, are perhaps too cold. Sure, there is a jolt of colour, but it doesn’t have the glamour and awe of higher-end rainbow watches. Then again, I find timepieces such as the coveted rainbow Daytonas from Rolex to be too hot. The diamond and gemstone combination is a lot to take in, and can attract more attention than some would like. With the new AP Royal Oak Selfwinding Carolina Bucci Limited Edition, the temperature is just right in my book. The subtle yet striking incorporation of the rainbow colour palette, the manufacturing process to make it happen, and its strategic framing within an all-black aesthetic achieves a perfect balance in my opinion. Its forward-thinking glamour and pizzaz does not demand attention, yet receives it anyway. Clearly complex to construct, yet effortless in capturing a gaze, I am convinced this is the coolest kid on the rainbow-watch block. 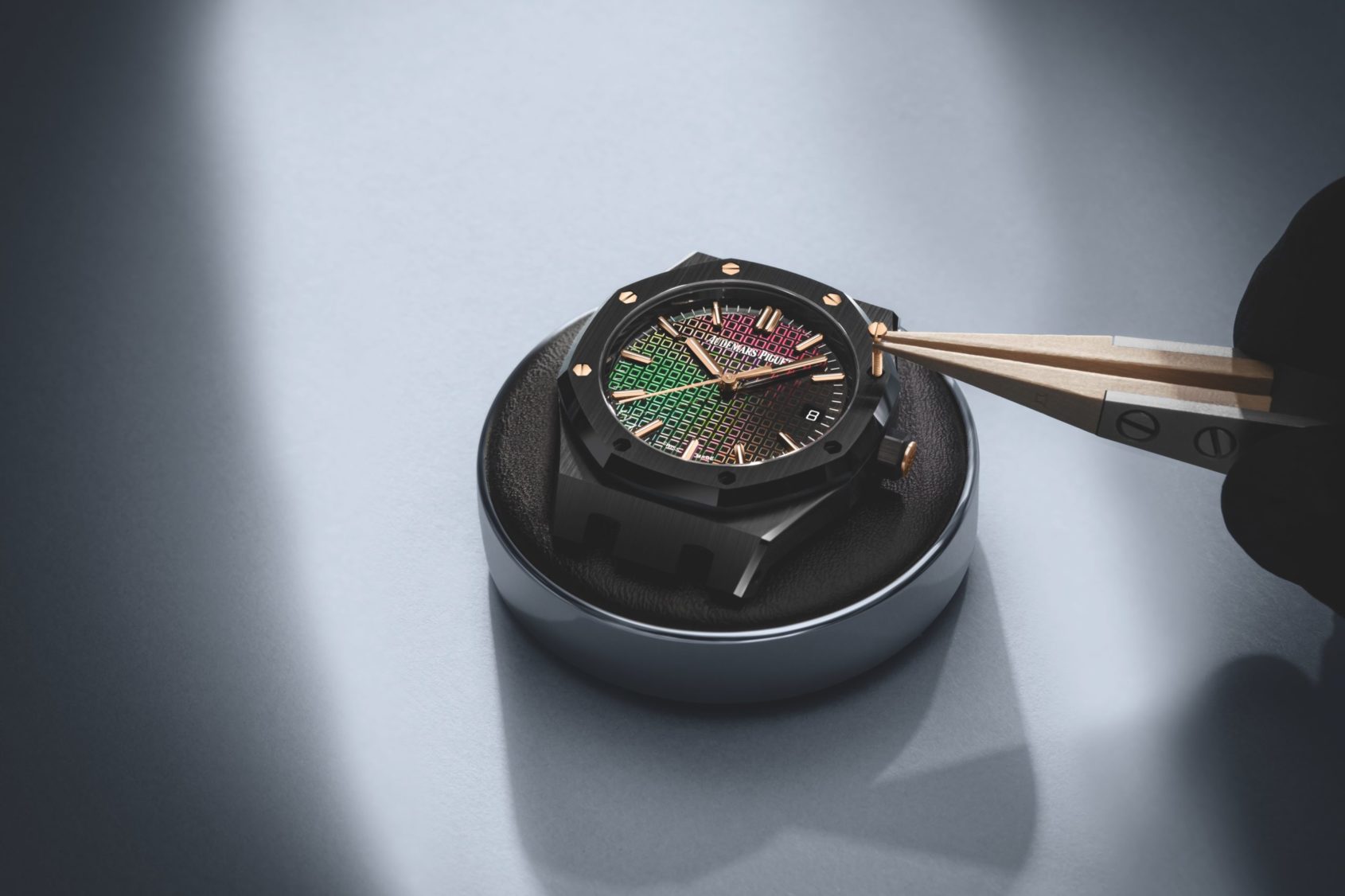