Omega’s lines between utility and luxury are ever-blurring, and increasingly confusing to people who like to categorise watches into strict genres and tropes. The truth is, the centuries-old Swiss powerhouse is constantly proving that you can have high-performance, high-specification and high-flex wristwatches without spending anywhere near as much as the competition. More to the point: if you want one, you can actually walk into a boutique and buy one. The Seamaster Diver 300M Chronograph Gold Titanium Tantalum is just the latest piece of evidence that Omega’s momentum isn’t stopping anytime soon. 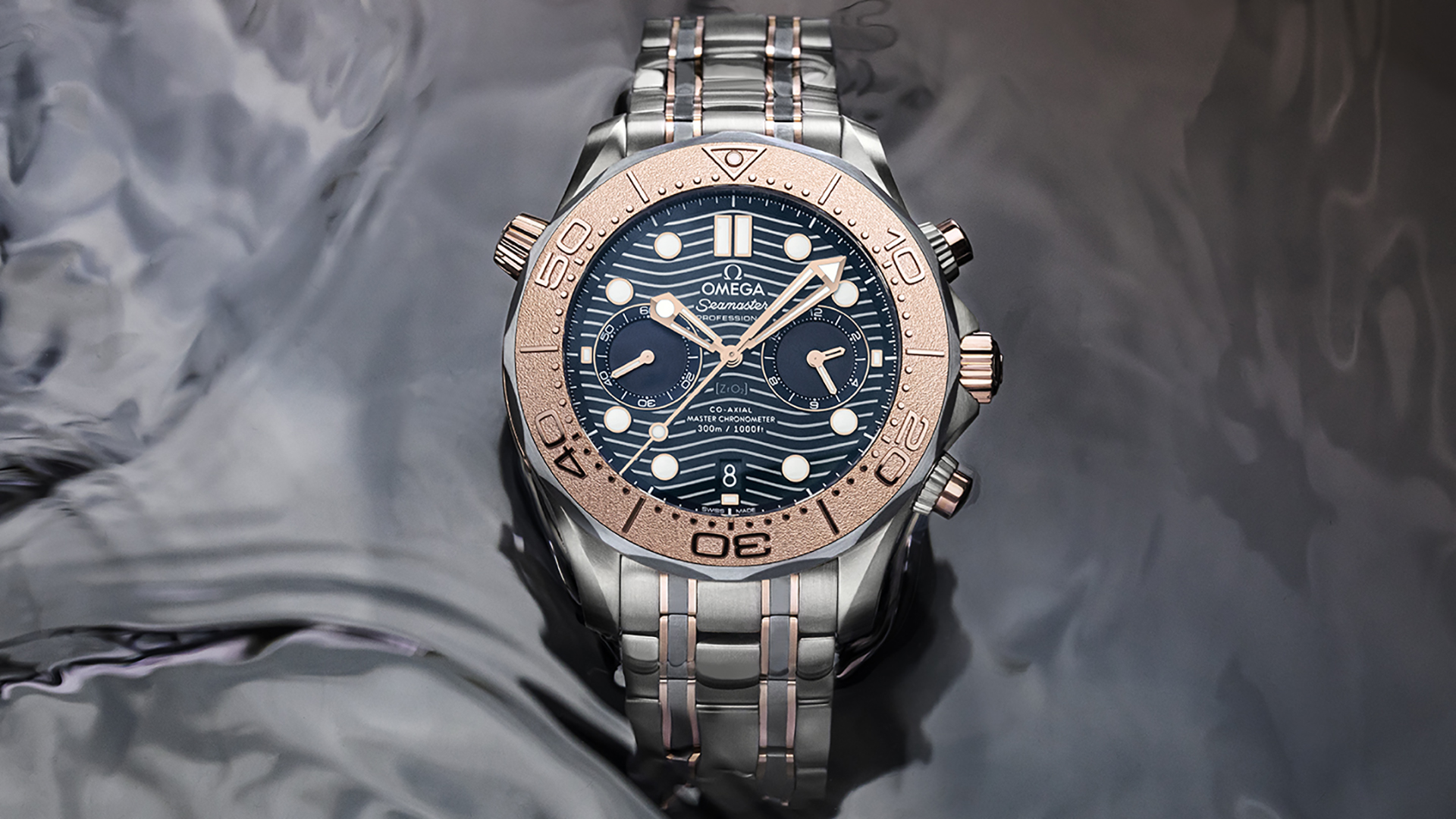 The overall impression of the watch is far from shy. As much as Omega tends to keep one classy step ahead of the word ‘gaudy’, this tri-metal beast certainly comes close. The embossed and stippled surface of the Sedna gold bezel is positively glitzy, creating an intense texture that not only adds a tactile satisfaction but also plays with the light in a rather glamorous way. The ring of tantalum, which forms the scalloped bezel, is certainly one of the most distinctive grey-toned metals in existence — the nearly pastel-blue tones neatly tying the case together with the navy blue wave dial, which extends the watch’s wrist presence all the way to its 44mm edges. The blue hue is slightly less obvious with the bracelet’s even links, although it still offers an evident contrast between the titanium odd links and the Sedna gold train tracks running down the bracelet’s length. 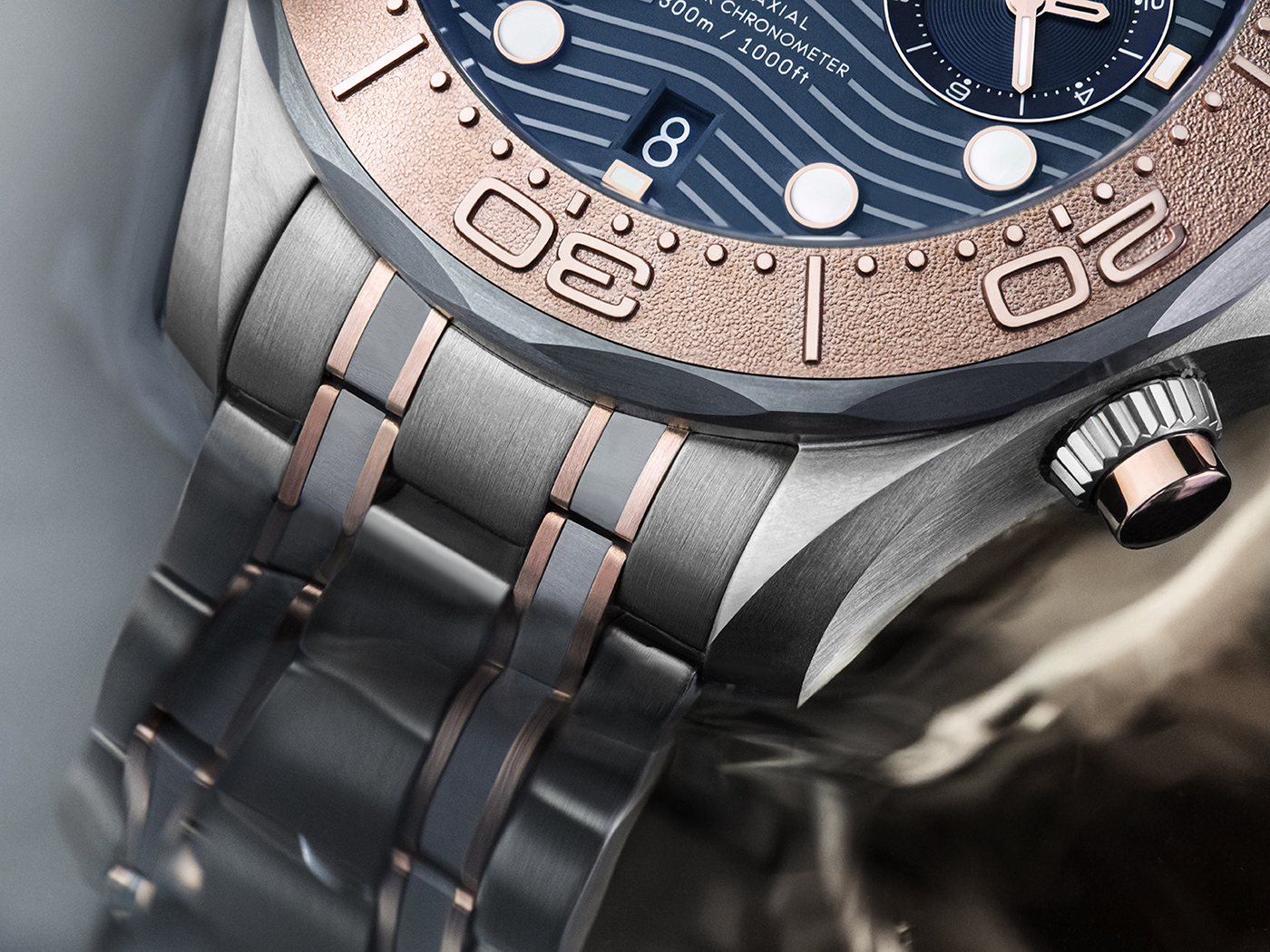 Between the wave dial, the textured bezel and the sub-dial rings — which even look like tiny bezels within the watch itself — you may assume that legibility would become an issue. Thankfully, the inherent design of the Seamaster Diver 300M range just begs to be checked and understood. The pure white luminous markers act as beacons in the daytime as much as they do when glowing in darkness, and the bold broadsword hands are perfectly proportioned. The crisp minute and seconds track around the dial’s perimeter is met by the lollipop seconds hand for quick and accurate reading, while the colour-matched date window is wonderfully integrated at 6 o’clock. 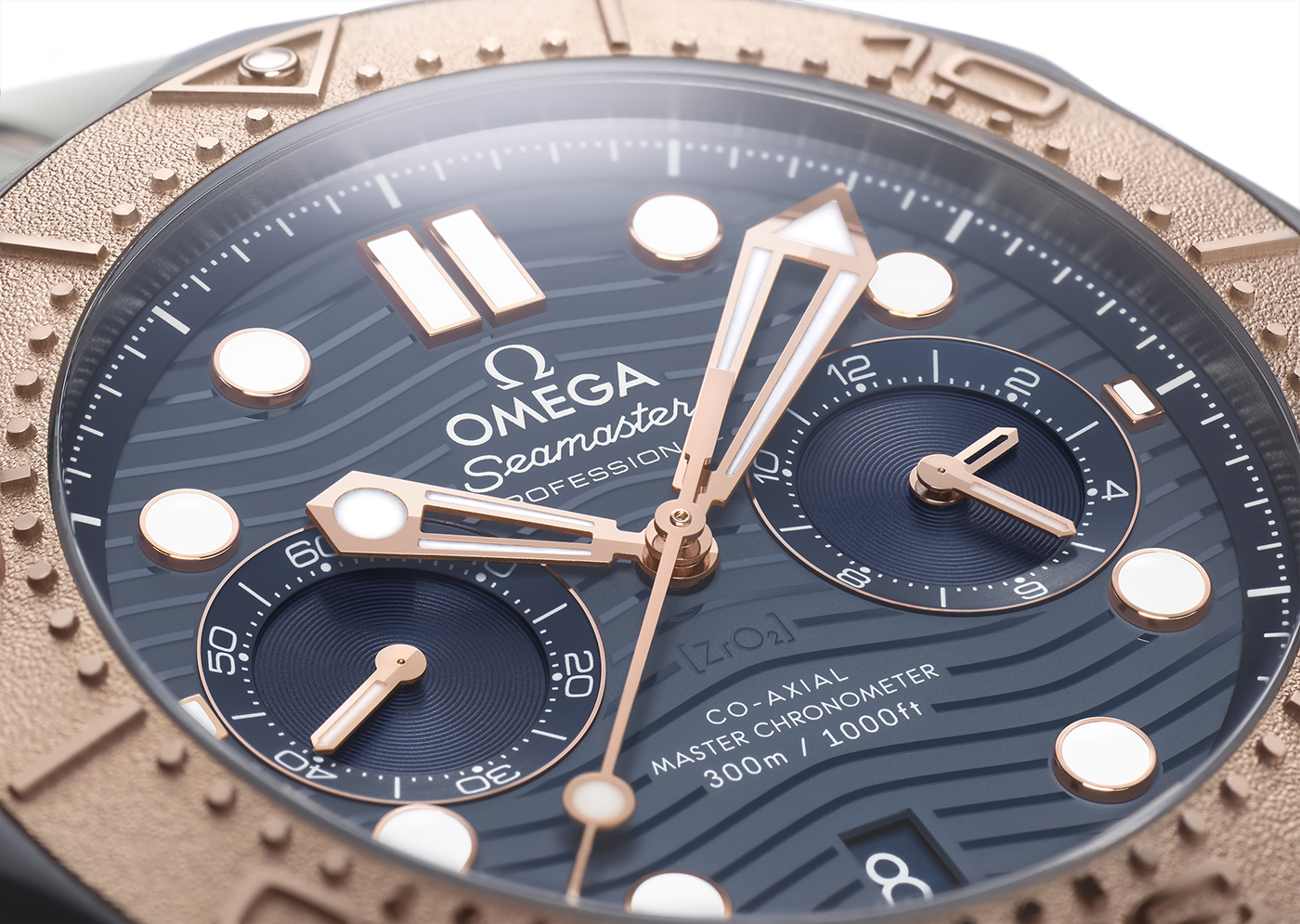 The movement lies behind a laser-etched hippocampus. Since the introduction of Omega’s in-house movements and display casebacks, the loss of the regal seahorse has been a contentious point among old-school Omega fans, so it’s good to see the honouring of their insignia — and done in a way without sacrificing the attractive view of the Calibre 9900. The latest and greatest chronograph movement from Omega is a behemoth, requiring the 300M’s case to be expanded to 44mm to accommodate it, but the features more than make up for it. With a column wheel, vertical clutch and dual mainspring barrels granting a 60-hour power reserve, it’s already up there with the specifications you’d expect from a high-end chronograph. Alongside its bi-compax sub-dial arrangement, with running seconds on the left and a combined minutes and hours dial on the right, the 9900 also allows for independent adjustment of the main hours hand for GMT functionality. 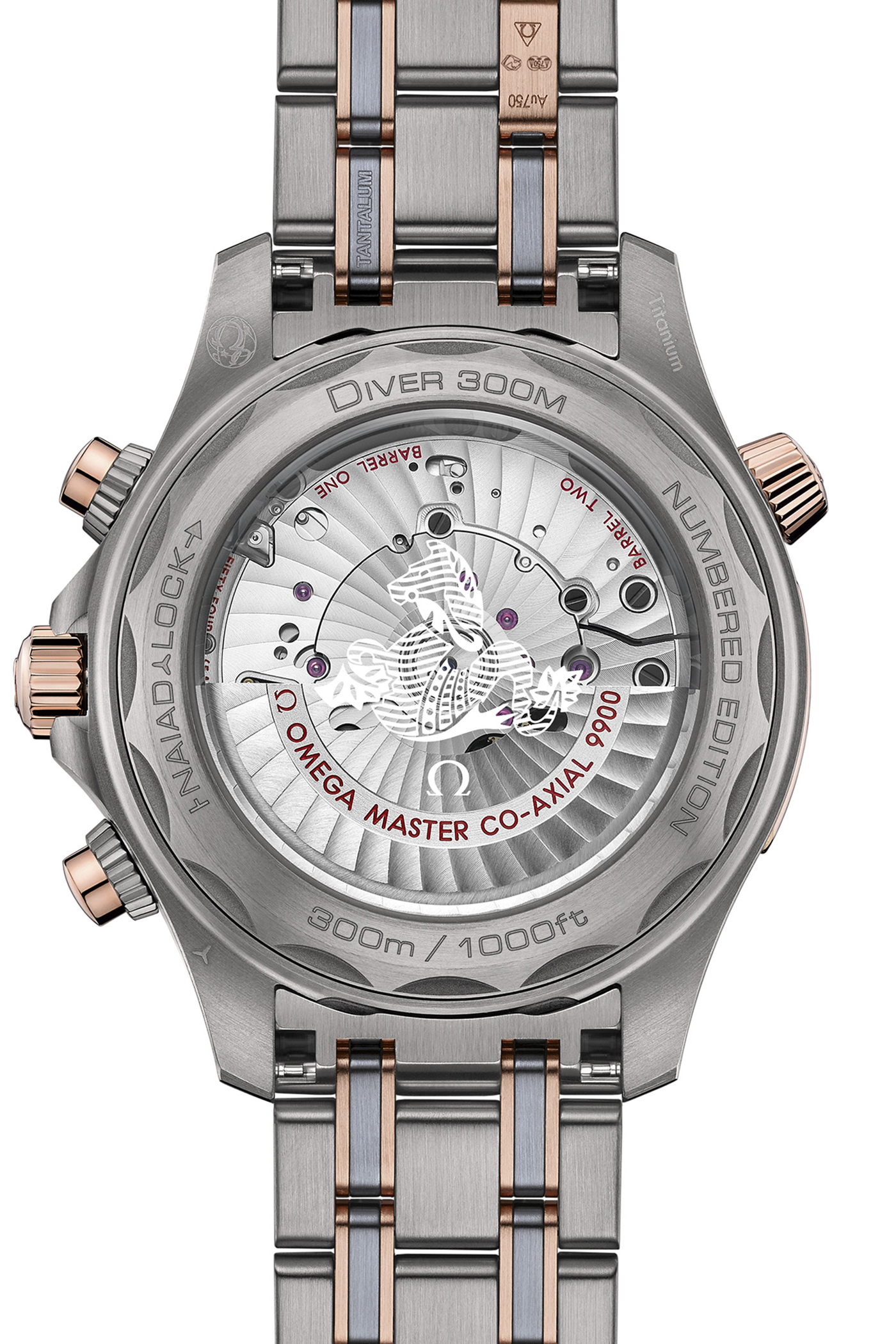 The reliability of the movement also can’t be understated, as it’s a Certified Master Chronometer approved by METAS. With Omega’s Co-Axial escapement design and a titanium balance with silicon balance spring, the entire watch is subjected to numerous gruelling tests to ensure its magnetic resistance up to 15,000 Gauss, water resistance down to pressures of 30ATM, and timekeeping below +5s per day. The beat rate of 28,800 vibrations per hour provides the characteristically Swiss smooth sweep. 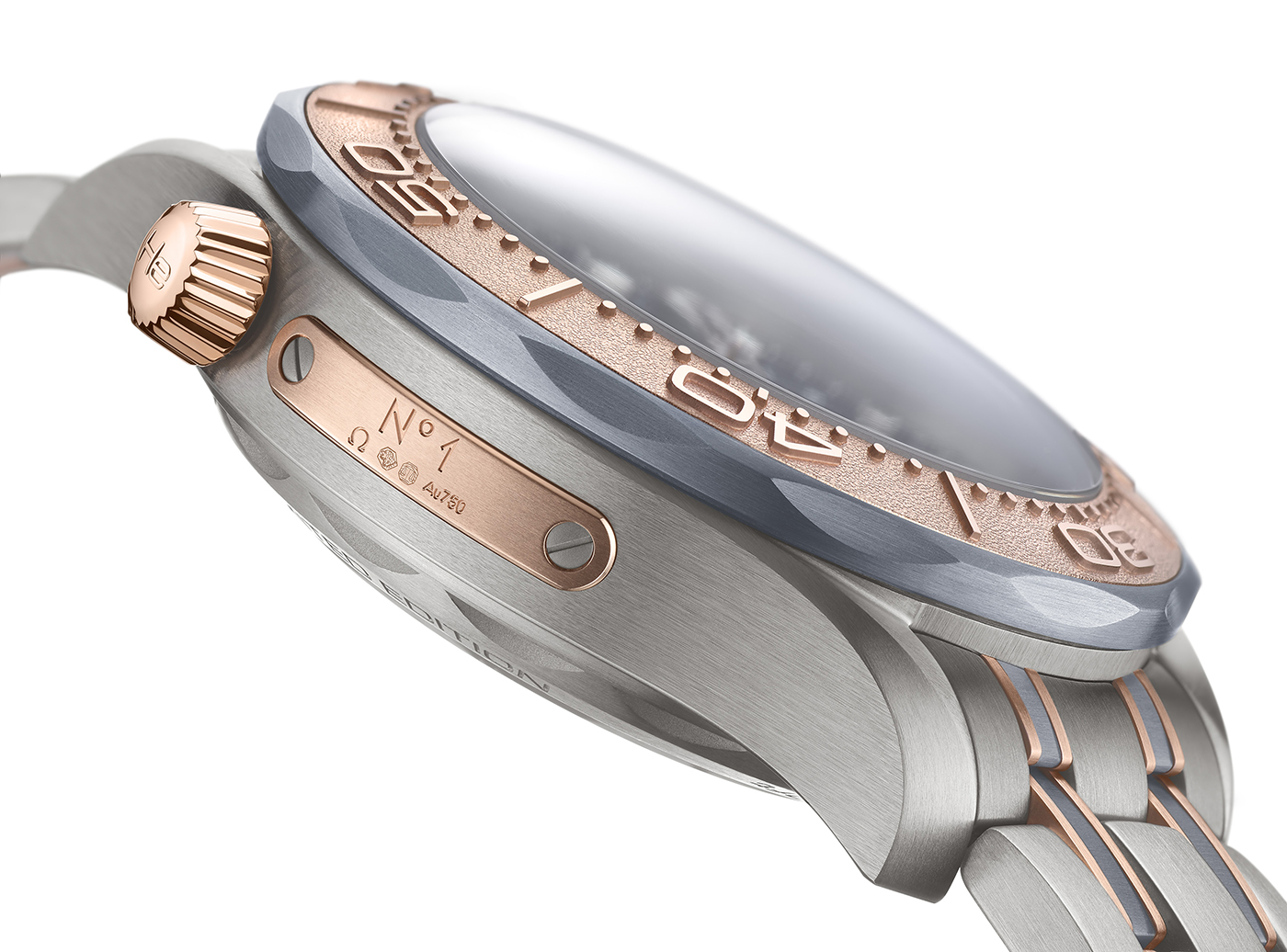 For an Omega packed with precious metals and a range-topping in-house movement, it shouldn’t be too surprising that the price comes in at just under $30,000AUD, which is nearly triple the cost of the basic steel-on-steel models with the same movement. You do also get the rather unconventional box, which is designed to look like the watch’s caseback — complete with etched hippocampus. As with most Omega releases of the last few years, the price seems to accurately reflect the piece you receive, as opposed to being either a bargain or overpriced. If you’re looking for an impression-making luxury diver, capable of surviving the harshest ocean as well as the eyes of judgemental peers, then it’s hard to go wrong with this watch. 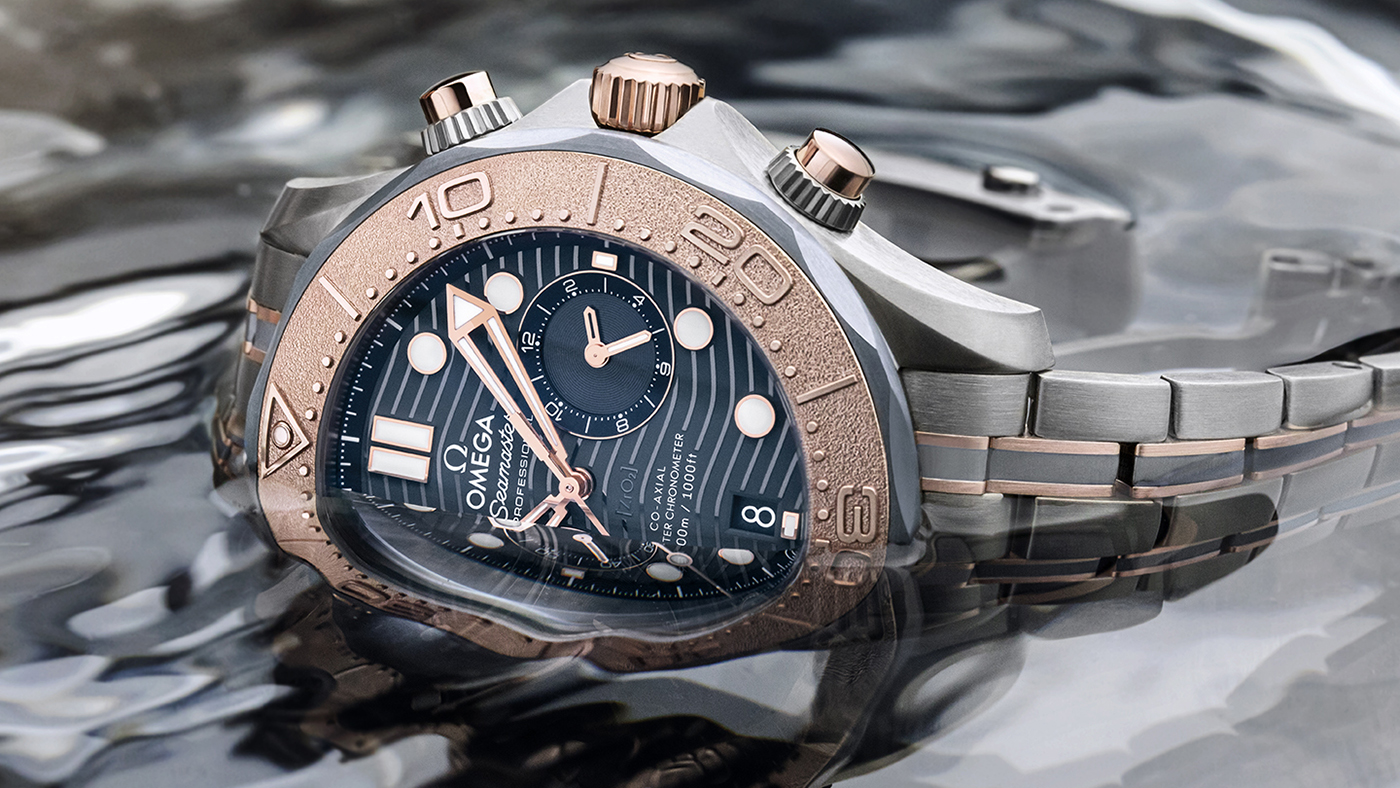 The Omega Seamaster Diver 300M Chronograph Gold Titanium Tantalum is AUD$29,875, and is available from mid-November.