Back in the 18th century, Pierre Jaquet-Droz wowed the courts of Europe with his Automates – three humanoid dolls, about one-third life-sized, that could variously write, draw and play music with uncannily lifelike gestures. Intended to promote his clocks and watches, and powered by scaled-up versions of mechanical watch movements, they were a stroke of marketing genius – as well as a remarkable demonstration of his skills.

Eighteen years ago, when Swatch Group revived Jaquet Droz, it harnessed that legacy – developing automata on the minuscule scale needed to fit inside contemporary watches. This meant men’s watches, as Jaquet Droz had no collection specifically for women in the first 13 years of its modern existence.

Then came the Lady 8 collection. Launched in 2013, its design adopted the brand’s signature figure-of-eight but rather than confining it to the dial, expanded it to create a sculptural double loop. The watch-case itself formed the larger circle and an extension formed the smaller, upper circle of the eight. Within that smaller circle lay a pearl or a polished stone, set invisibly so that it could be rolled this way and that, under the fingers – like a very sophisticated and sensual fidget toy.

Two years later, Lady 8 arrived with its own specially developed automation: a domed sapphire crystal replaced the gemstone bead, and beneath it lay a beautiful automaton: a lotus flower that opened and closed – giving the Lady 8 Flower its name.

This year has brought two new variations of the ‘Flower’ – one in white gold, one in rose gold, each in an edition of just eight pieces. A pusher at 2 o’clock sets the automaton in motion: the eight petals of the lotus bud begin to open, their textured outer surface gradually revealing the mirror-polished inner surfaces. In the centre, a briolette-cut diamond or sapphire spins on its axis, catching the light, its sparkle reflected and multiplied by the petals. This entrancing mechanical ballet lasts for just eight seconds – as fleeting as the beauty of a perfect blossom.

Inside the 35mm case is a self-winding mechanical movement, calibre JD 615, which provides a power reserve of 38 hours. Three sapphire crystal windows in the case-back allow you to enjoy the movement of the platinum winding rotor – which is decorated with a guilloché fan pattern – and various other elements, including the wheels that drive the automaton. 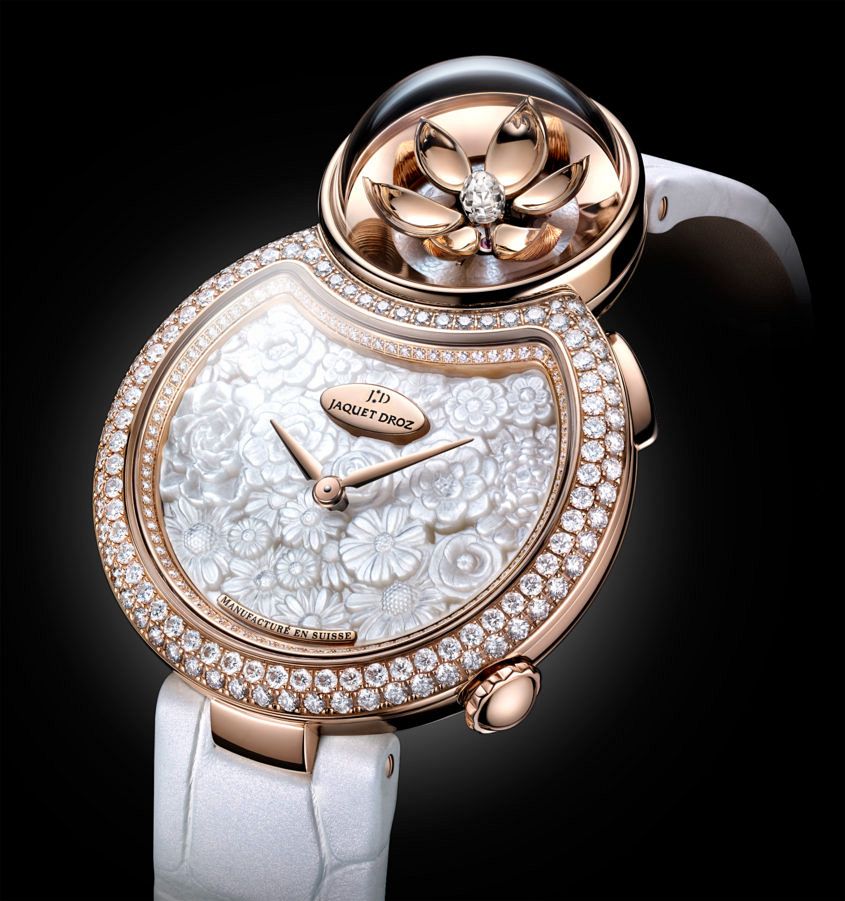 Complementing this mechanical beauty, the dials are a gorgeous testament to the skills of Jaquet Droz’s decorative artists. On the white-gold model, lotus leaves are rendered in grand feu enamel, the different shades of blue (achieved by using a different amount of enamel powder for each firing) create a magical illusion of depth – as if the leaves were overlaid on top of each other, rather than simply sketched in outline on a single surface. Among them nestle lotus flowers and buds, engraved in bas-relief.

On the red gold version, the rich colour of the polished metal is offset by a dial in glowing white mother-of-pearl, hand-carved to create a delicate pattern of flowers that spreads across the surface like a particularly lush, three-dimensional piece of guipure lace.

While the Lady 8 Flower is a major statement piece, its petite little sister is equally charming – just a little more modest, perhaps even a little more playful. Its 25mm case feels more intimate – a softer and more girlish take on femininity. 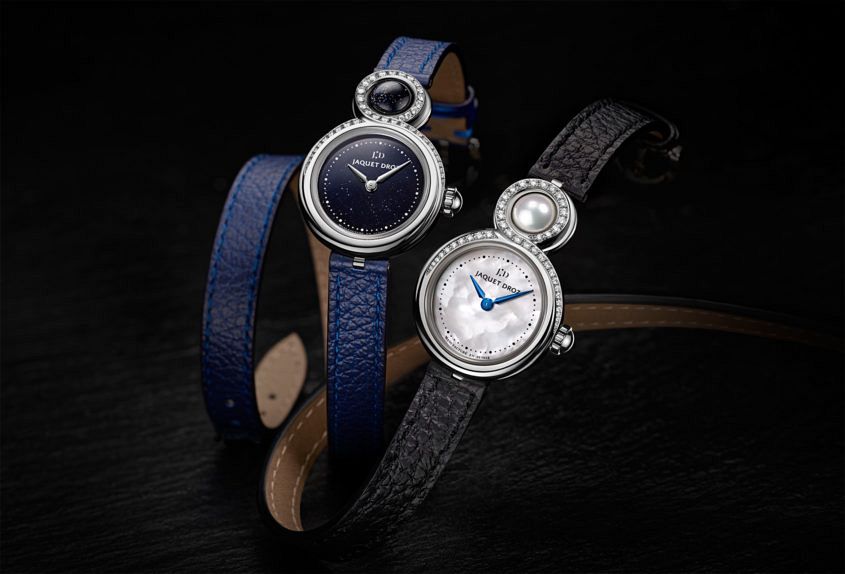 In place of the automaton, the Petite model adopts the mobile gemstone bead of the original Lady 8 – placing the visual focus firmly on the dials and gem-setting. And what a choice of dials: in the red gold case, we have white or copper-coloured mother-of-pearl, finished with a circular-grained pattern that creates an optical effect of beautiful, pillowy clouds as it catches the light. In the stainless steel case, the choice is white mother-of-pearl (with the same circular-grained finish) or sparkly midnight-blue aventurine. 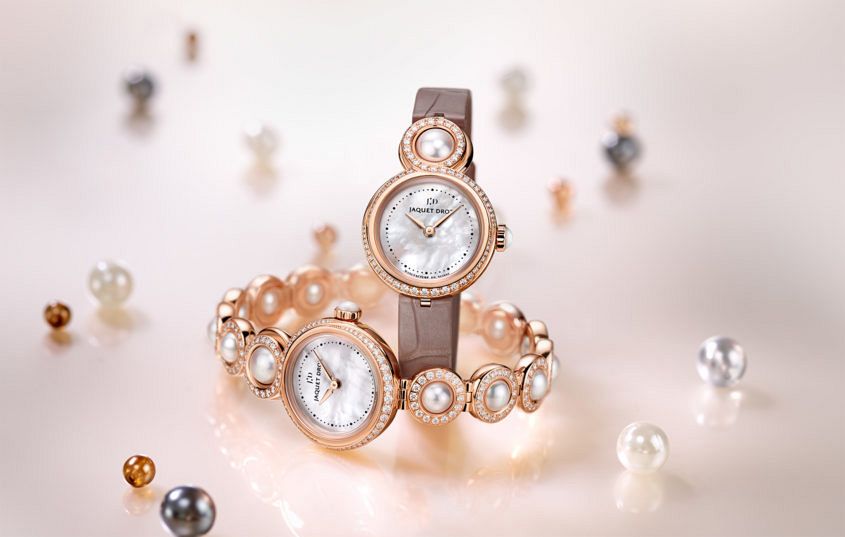 Each model has its own strap or bracelet, carefully designed to complement the case and dial. The two steel pieces have chic double-wrap straps in grained calf leather, while the red gold offers a simple option of a single-wrap alligator strap or a gold bracelet comprising diamond-set circular links with gemstone beads at their centre – pearls with the white dial and jade with the copper-coloured dial, the latter in an edition of eight pieces only.

It’s worth noting that, unlike many watch brands, which default to quartz movements for all of their “ladies-size” watches, Jaquet Droz is mechanical all the way. Extra kudos for that. The movement in the Lady 8 Petite – seen through the sapphire case-back – is the same self-winding calibre JD 615 as in the Lady 8 Flower. This, then, is a very feminine-scaled watch for women who don’t want to compromise on either style or watchmaking substance.