Jaeger-LeCoultre is widely regarded as making some of the finest dress watches on the market. But for those not familiar with the Le Sentier firm’s full collection, JLC also makes a very good stainless steel sports watch – the Polaris. And now the legacy watchmaker has decided to up the ante with the Polaris, broadening its breadth of abilities and unveiling an entirely new model aimed squarely at taking on some of the best steel dive watches on the market. Introducing the Jaeger-LeCoultre Polaris Mariner Date. 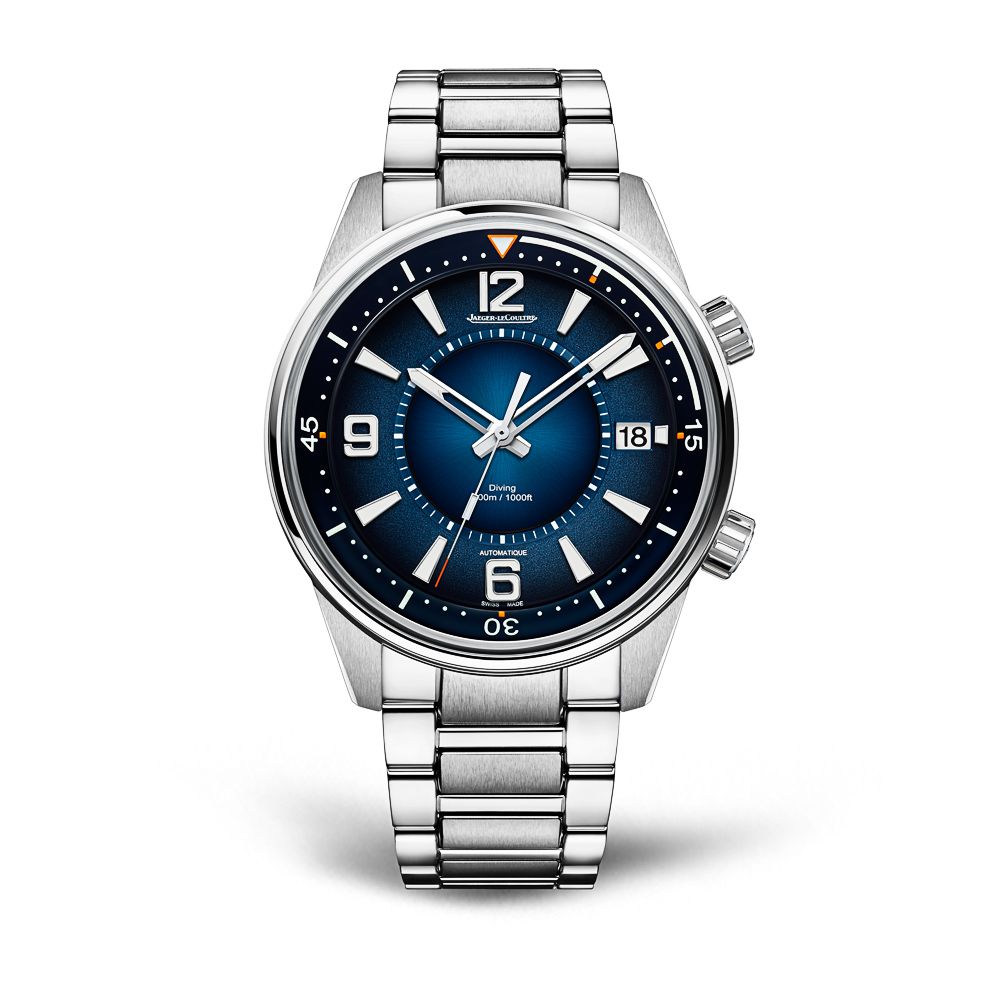 JLC has described the new Mariner as being both sporty and elegant, and, to their credit, the 42mm x 13.92mm stainless steel case of this watch appears to be exactly that. Short, tapered lugs, with a decent amount of inwardly concaved articulation, give way to a simple and round body that looks inoffensive yet purposeful. The aforementioned lugs are horizontally brushed, which definitely gives off a dynamic aura; however, the lugs’ edges are chamfered, and the plain steel bezel is also highly polished, so there’s visible opulence on offer too.

Now, a dive watch without a rotating bezel would be about as useful as an oxygen tank without O2, but don’t fret, because JLC hasn’t forgotten this lifesaving tool. No, they’ve merely enclosed it inside the diverse case, ensuring that it can never be accidentally knocked out of position and therefore never display the wrong information. To adjust the inner bezel, wearers need simply to unscrew the crown located at the two o’clock position and adjust accordingly. The secondary crown, located at the four o’clock position, does exactly what you think it does – adjust the time and date.

Dual-crown watches aren’t exactly an easy thing to pull off, but JLC has more than its fair share of experience with this particular style, and as you can tell from the photos, they’ve succeeded with the way this watch looks. Being a fit-for-purpose dive watch, the fetching appearance of the Mariner Date has been backed up by 300 metres of water resistance, and JLC has also decided to fit the watch with a box-style domed sapphire crystal that sits a few mill proud of the case. The rear of the watch has also been given the sapphire treatment, with a display caseback that shows off what has to be one of the best movements found inside any dive watch. 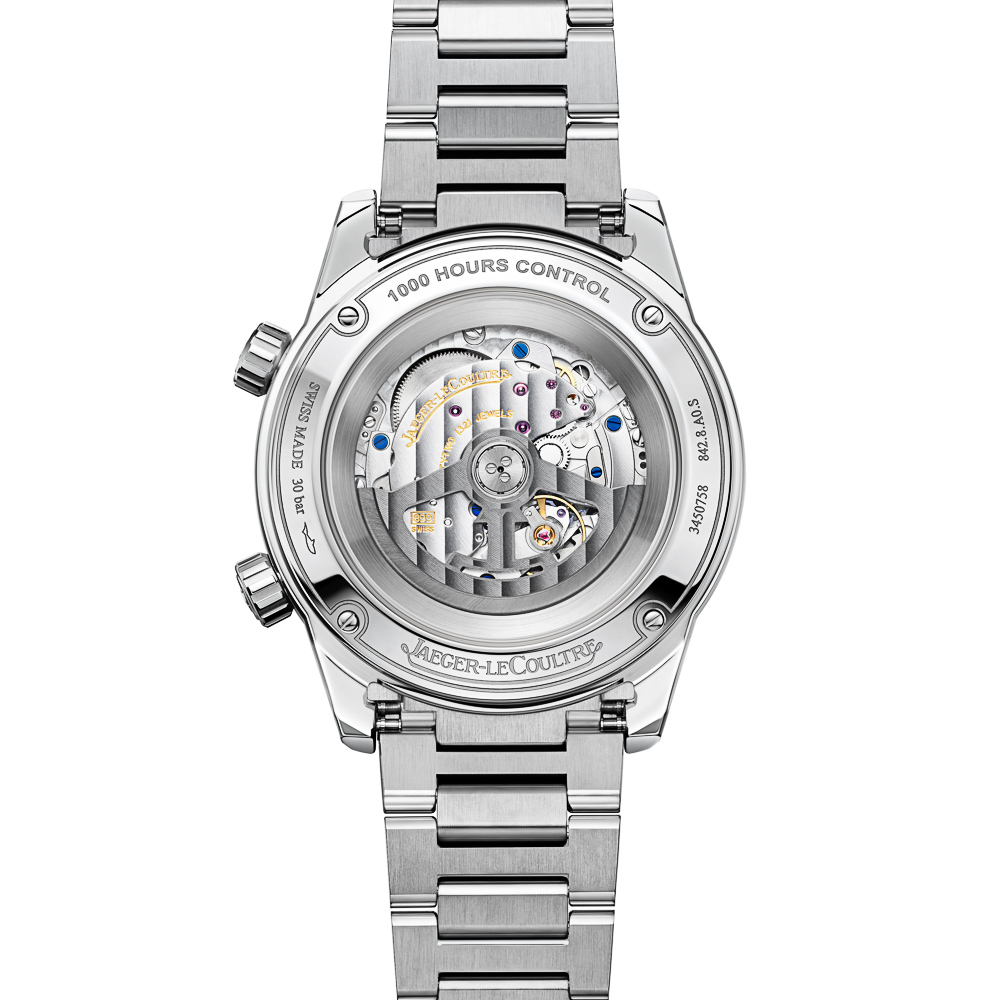 The newly redesigned Calibre 899, which features a reshaped escapement, new silicon components, and screws hewn from titanium, is a self-winding par excellence of Swiss watchmaking. The movement features some attractive finishing, such as a skeletonised oscillating weight replete with JLC motif, and the technical specifications needed to back up the beautiful looks. We’re talking 32 jewels, 28,800 vph and 70 hours of power reserve. Jaeger-LeCoultre has been nicknamed the “watchmaker’s watchmaker” for quite some time now ­­– they’ve made movements for just about every high-end marque in the game. This movement clearly demonstrates why this is the case. 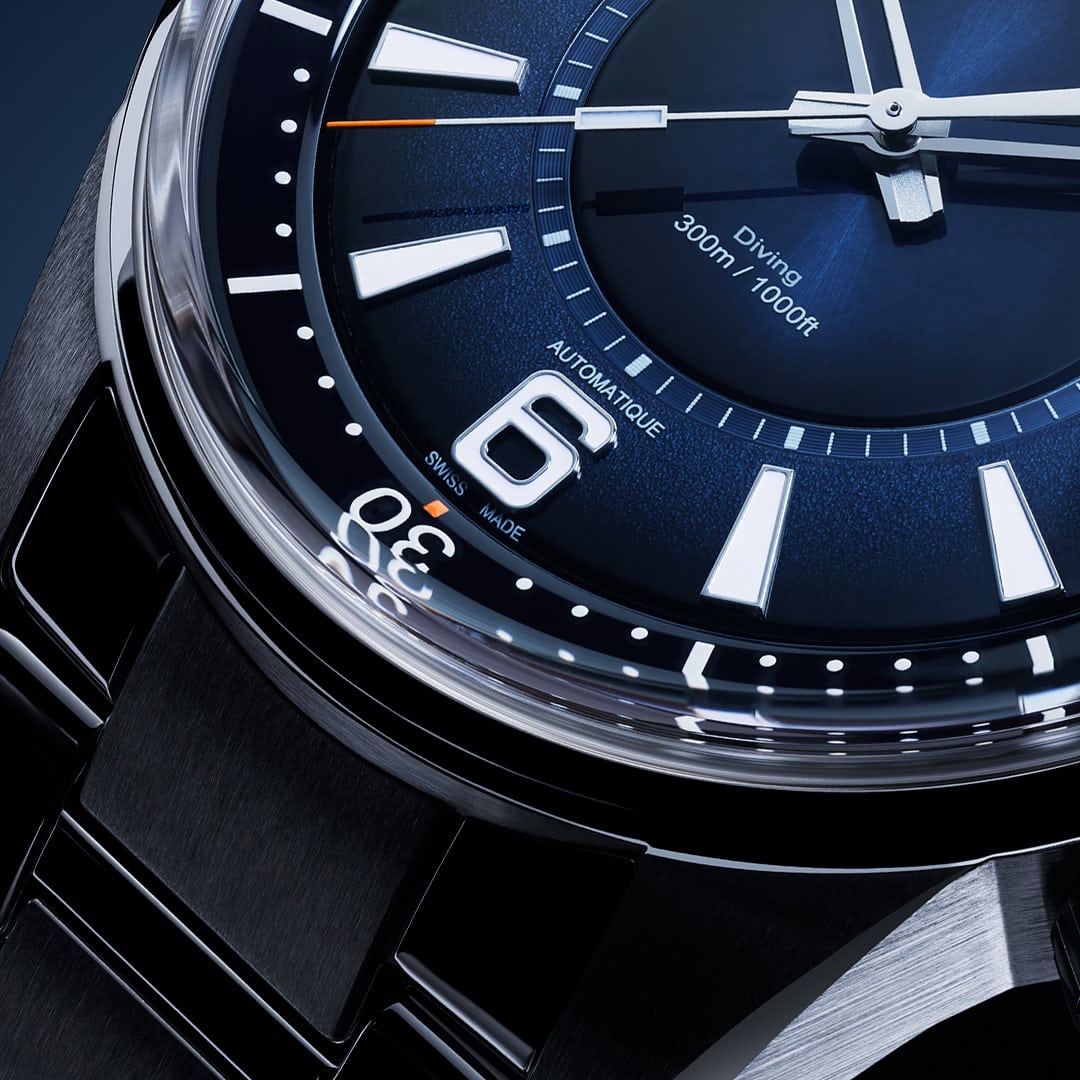 Another very strong selling point of the Polaris Mariner Date is its dial. Just look at it. Gradient-blue and gorgeous, the three distinctly different concentric circles is a striking design we’ve seen in other models, but the subtle tweaks JLC have made to this model are a real highlight.

The inwardly concaved rotating bezel is a flat, opaline inky blue that’s contrasted with white highlights and splashes of orange that make for a sweet combo. Inside the bezel is a granular, stunning dégradé-style surface that sees colour bleed from its centre. A diminutive, concentrically patterned railway track sits inside the gritty central ring, and inside that is a handsome sunray brushed central disc that brings the whole ensemble together with aplomb. Combined with trapezoidal indices and bold numerals at 12, six and nine o’clock, as well as a razor-sharp, semi-hollow pencil-style handset, this is a dial that has a great deal going on, but, boy, does it work! 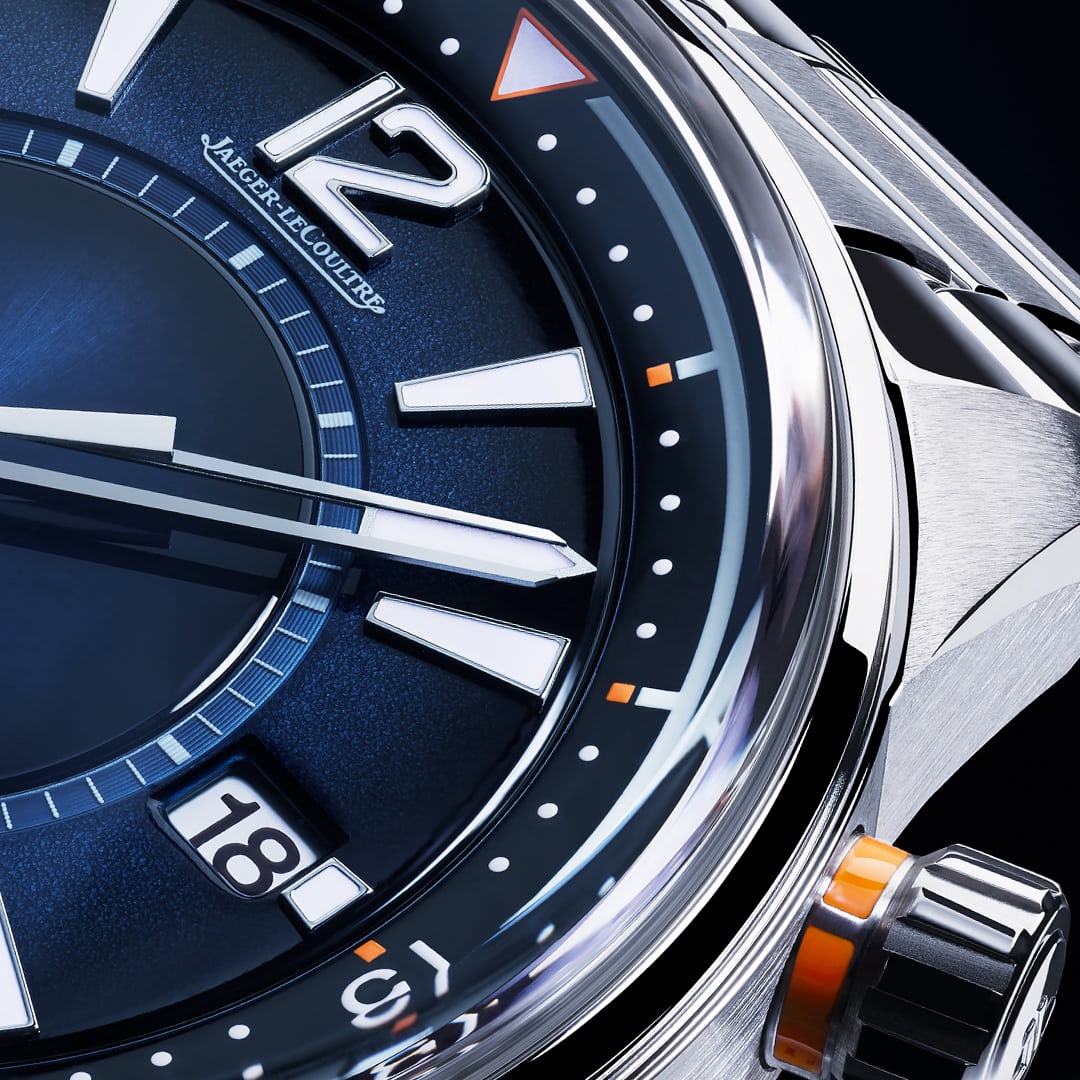 The steely dive watch has been paired with a stainless steel tri-link bracelet that perfectly matches the predominant mood of the timepiece. The central links are vertically brushed, providing good continuity with the lugs and also giving a tough utilitarian look that needs to be present on any good sports watch. The outer links, on the other hand, are highly polished and match the bezel and the chamfered edges of the lugs. The resulting juxtaposition is a finely balanced appearance that will ensure the Polaris looks right at home on the wrist of someone in a boardroom, or poolside at a six-star hotel in St. Barts. 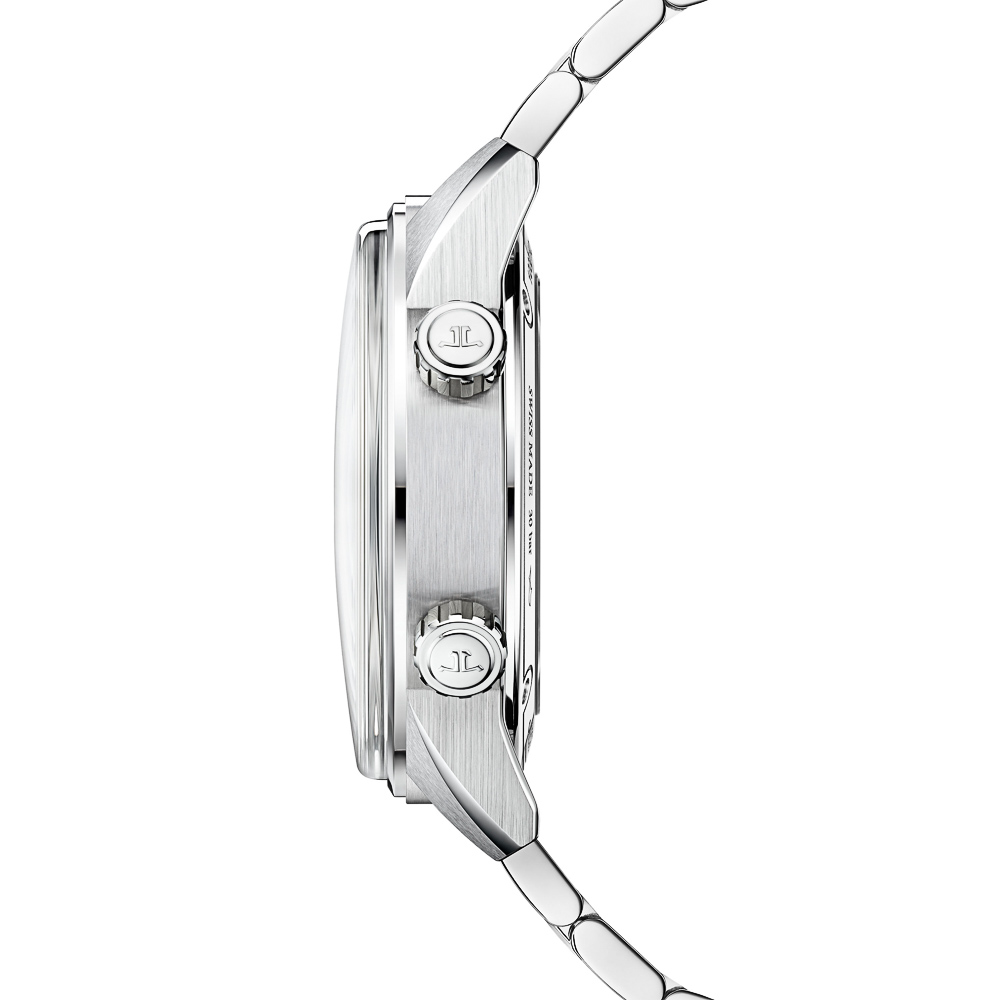 The Jaeger-LeCoultre Polaris Mariner Date is a welcome addition to the Polaris family, and JLC now has a dive watch that can more than hold its own among its Swiss dive watch contemporaries. It is a tad bigger than some of its notable rivals, but due to its shorter lugs that contour around your wrist, the watch doesn’t wear anything like as big as its on-paper dimensions. And the dial … just wow. Keep it up, JLC, you’re on a roll.

The Jaeger-LeCoultre Polaris Mariner Date, Ref. Q9068180, has a recommended retail price, in Australia, of $17,400AUD and is available from JLC boutiques and authorised dealers.