This year is a big one for Grand Seiko as it is the 60th anniversary of the brand, a number already made special with several limited editions. Over the last few days they have released several more, one of which is arguably their most impressive dive watch yet. Say hello to the Grand Seiko SLGA001, a titanium diving watch that is powered by a brand new Spring Drive movement, and is water resistant to 600m. 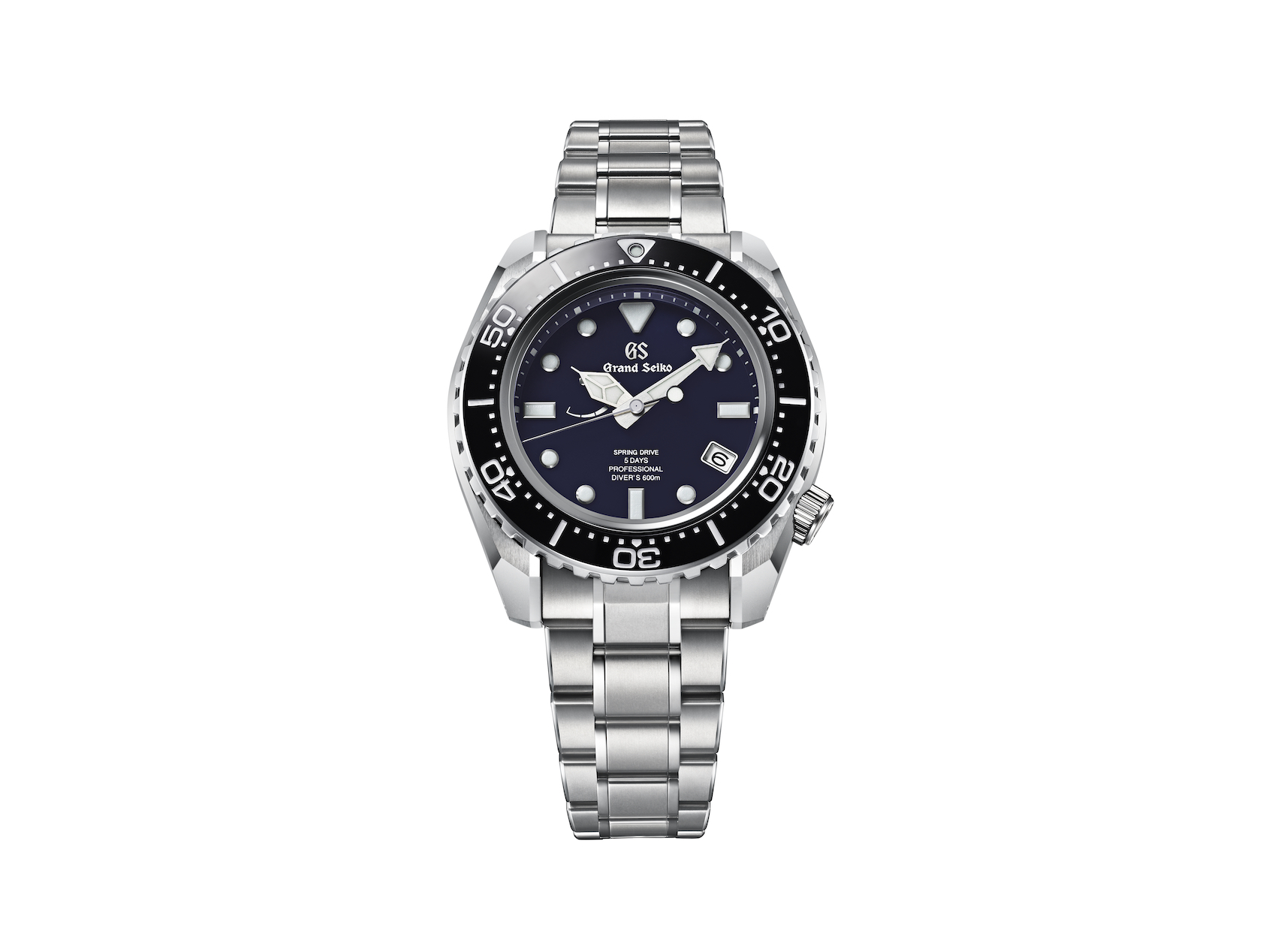 Before we get to why the new movement is important, let’s focus on the case and dial. At 46.9mm x 16mm, the dimensions are initially daunting for anyone with wrists smaller than Dwayne Johnson, but they are actually significantly less hefty, thanks to the material of the case and bracelet. The watch is made of a special high-intensity titanium, which is 40 per cent lighter than the typical steel used in watchmaking, and has the added benefit of basically being impossible to scratch. 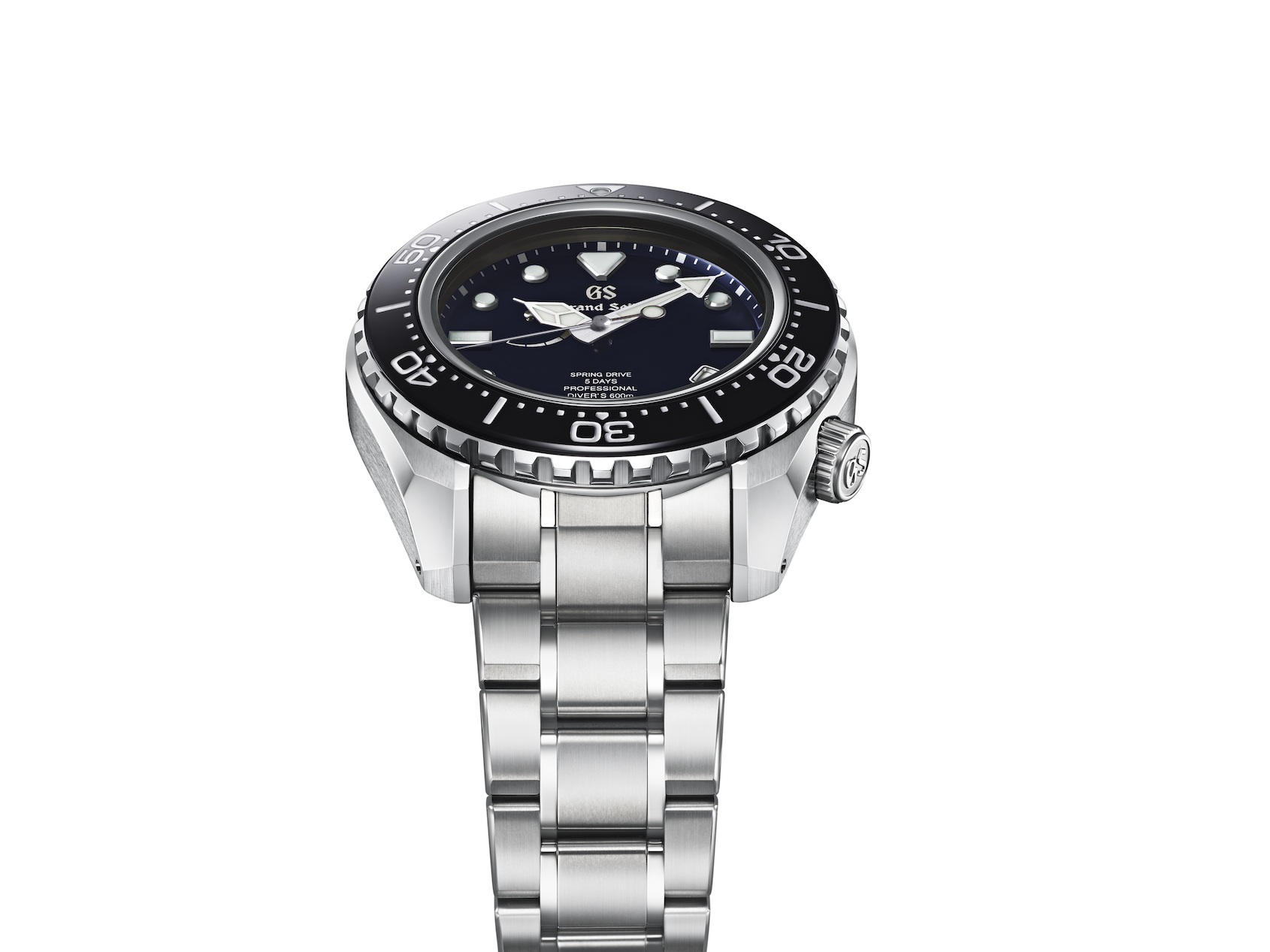 This reduction in weight would contribute to a reduced sense of bulk on the wrist, which has sometimes been the feedback for the larger dive watches produced by Grand Seiko. The shape of the SLGA001 case features relatively short lugs, which make this watch — as well as watches such as the Prospex “Turtle” collection — wear significantly smaller than their dimensions might suggest. The dial is a deep matte blue that reminds of the inky deep that this watch was made for, and is punctuated by the LumiBrite-filled hour markers and hands. 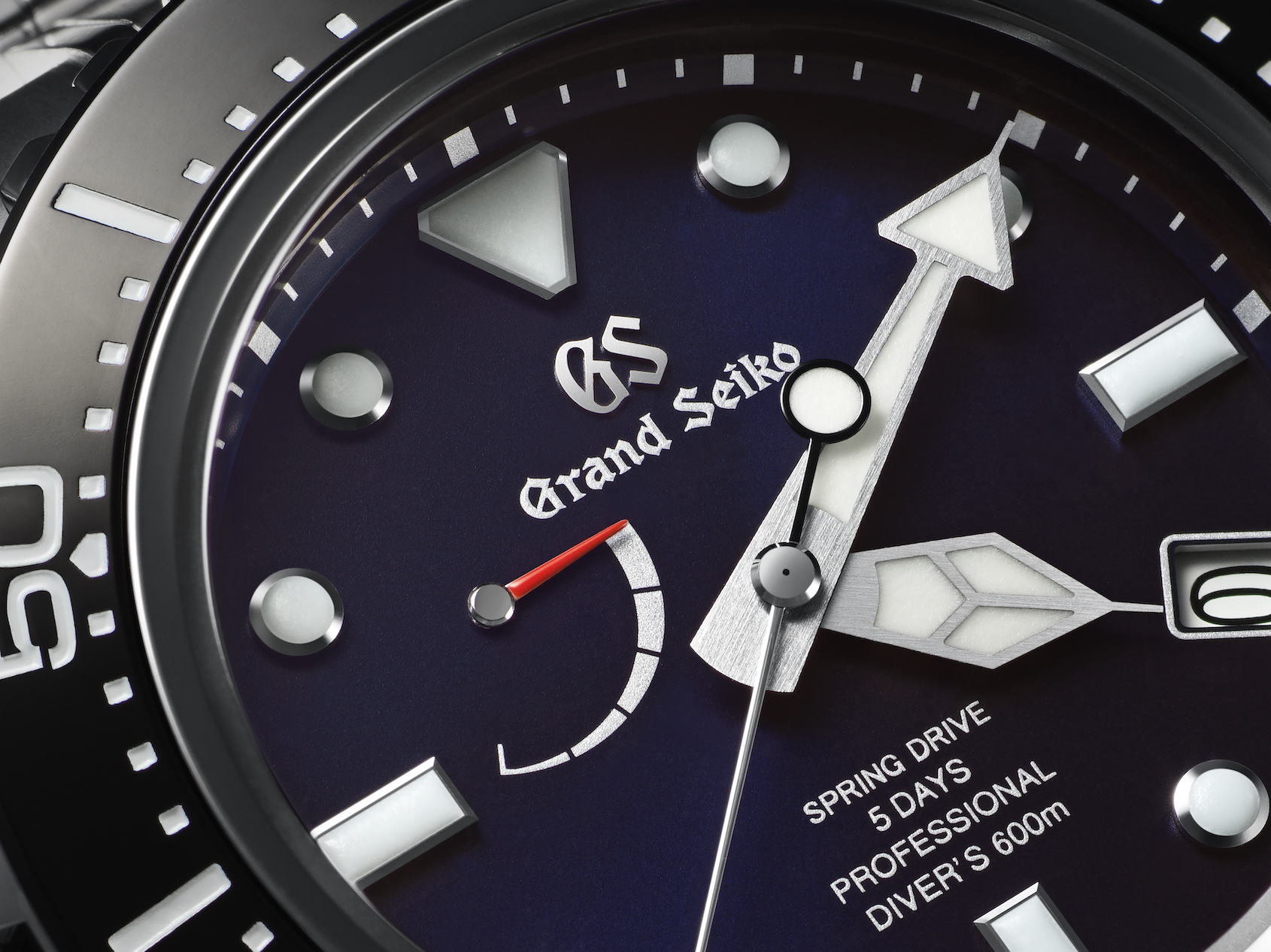 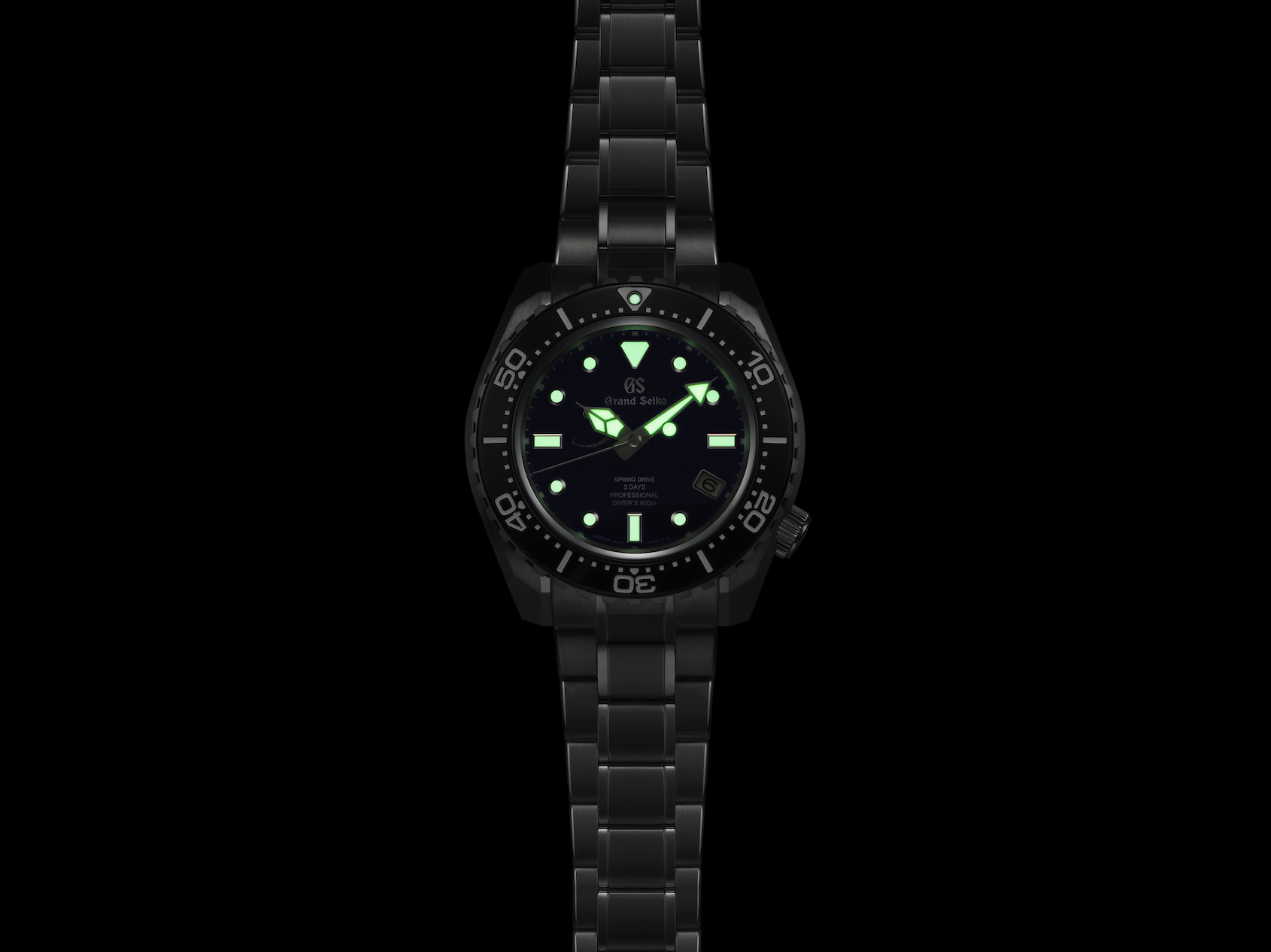 The new Spring Drive movement powering the Grand Seiko SLGA001 (see our detailed explanation of how the Spring Drive movement works right here) is a feat of engineering that shows the commitment of the brand to continued development in environment-specific watchmaking. Not only is the movement slimmer (yes, 16mm tall is a full 1mm slimmer than the SBGH255, the only other Grand Seiko water resistant to 600m), but the power reserve is extended to a full 5 days (120 hours), thanks to an additional mainspring barrel, and the watch is more shock resistant thanks to a single-piece central bridge. 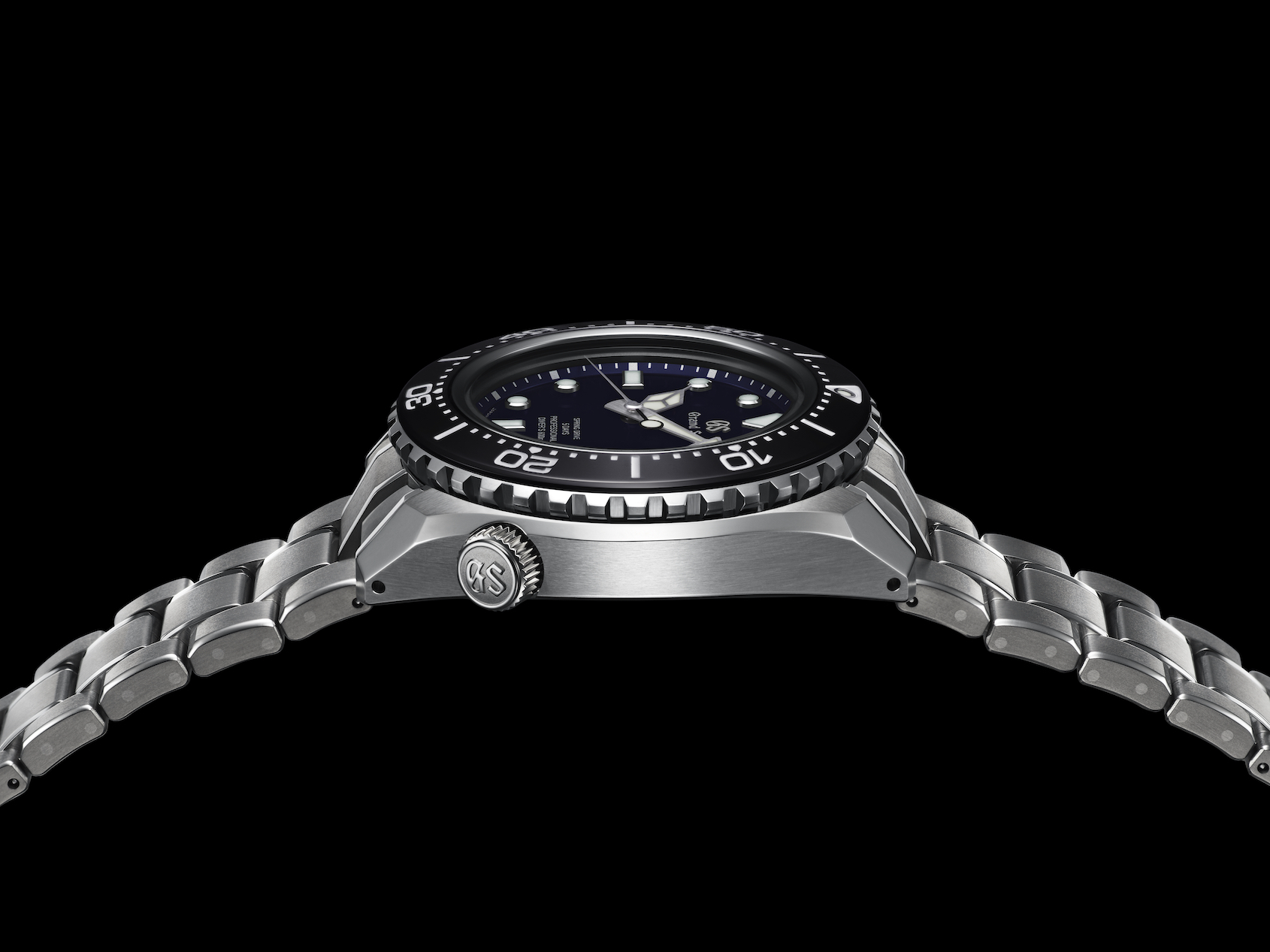 If that wasn’t enough, they have improved the accuracy of this Spring Drive movement ±0.5 second per day (±10 seconds per month), thanks to the vacuum-sealed and thermo-regulated quartz oscillators, which are highly sensitive to temperature change. This is technology we have seen in the quartz Grand Seiko 9F movements before, as well as the three-month ageing process of the quartz crystals, but it is the first time it has been applied to a Spring Drive movement. 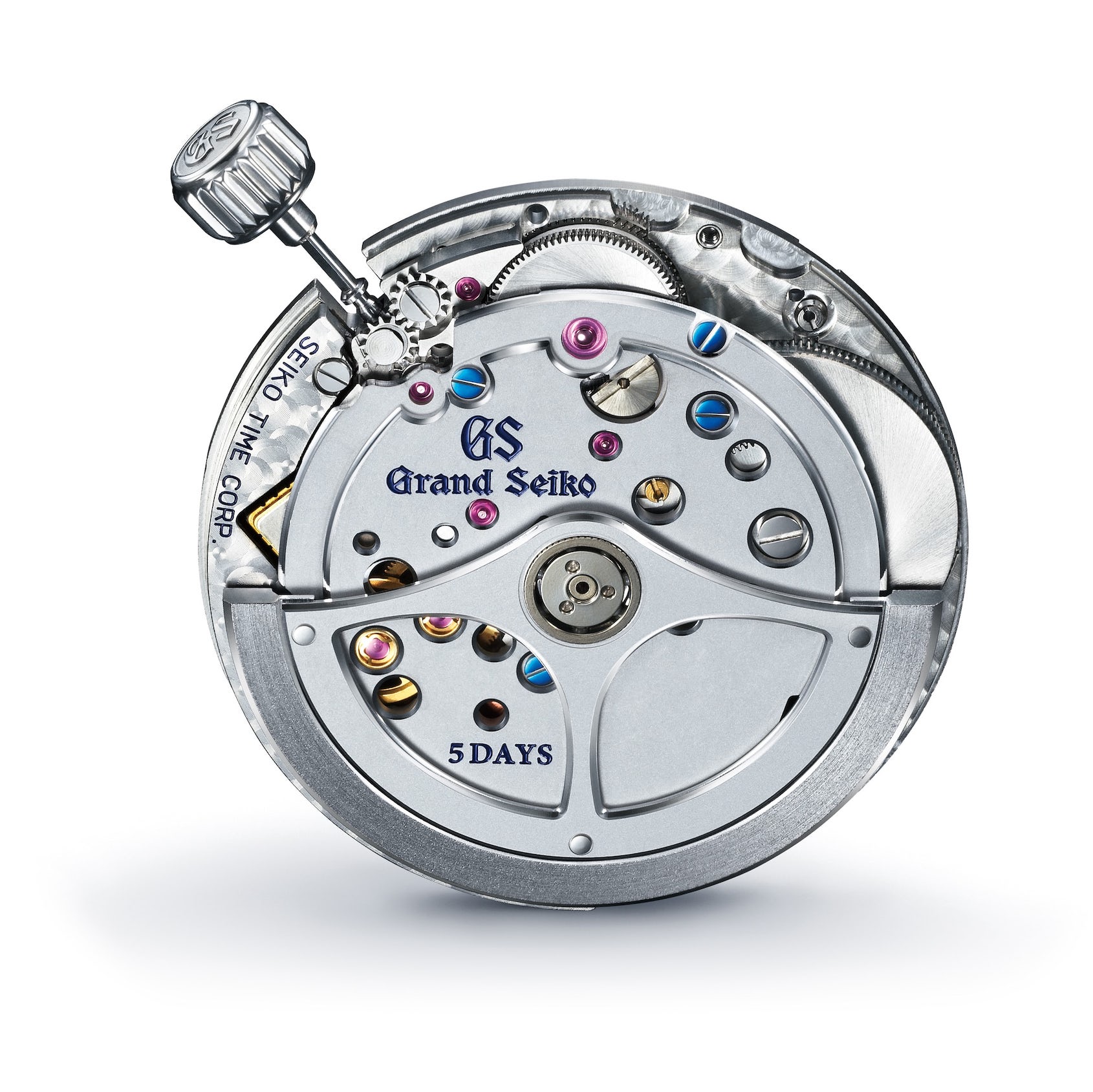 Every angle of the Grand Seiko SLGA001 has been considered, in typical style of the Japanese watchmaker, to be better than any previous examples of the watch. As a package, it is thinner, tougher, longer-lasting, deeper-diving and more accurate than its predecessors, as well as having the same distinct, heavily faceted, Grand Seiko design language that we know and love.

The Grand Seiko 60th Anniversary Limited Edition Professional Diver’s 600M SLGA001 is limited to 700 pieces worldwide. It is anticipated to reach boutiques in August and has an RRP of $16,500 AUD.