Not the zingiest name I’ve come across, I must admit. Is this a statement, an actual watch – or something stolen by an Area 51 engineer from an alien craft?  It might be all of the above and, boy, it’s brash and edgy (pun intended). Consider this an ongoing story as much as it is a watch. While everyone is staring goggle-eyed at the bold architectural structure with its bombardment of colours and textures, I will endeavour to explain the mission of this Garbage Watch. 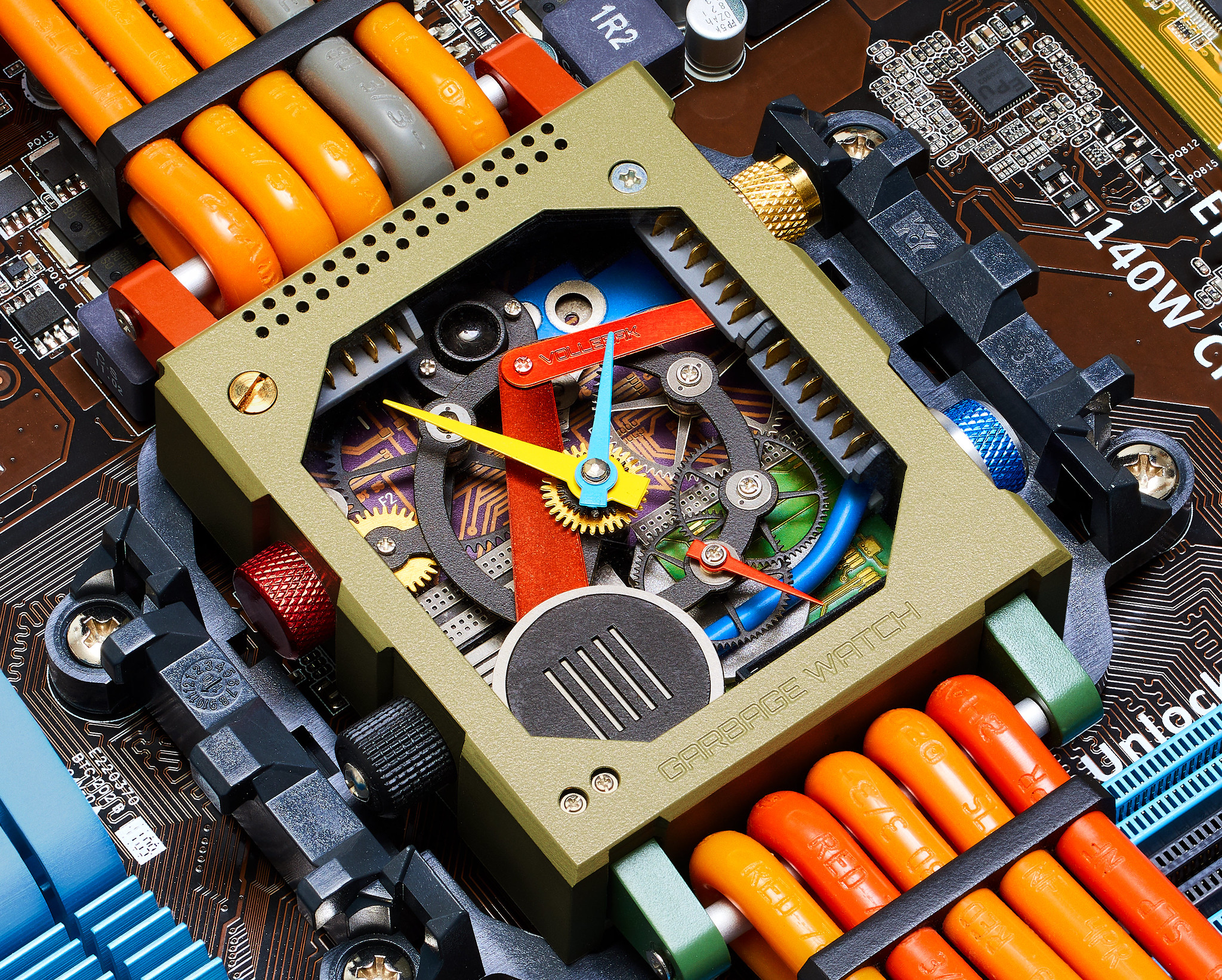 Vollebak is at the cutting edge of high-tech fashion, and this is their first watch. In their catalogue you’ll find the Carbon Fibre T Shirt, engineered with 120 metres of carbon fibre and an indestructible graphene-coated jacket. This is no purveyor of sartorial chic in the traditional sense, but part of the future of the garment industry. 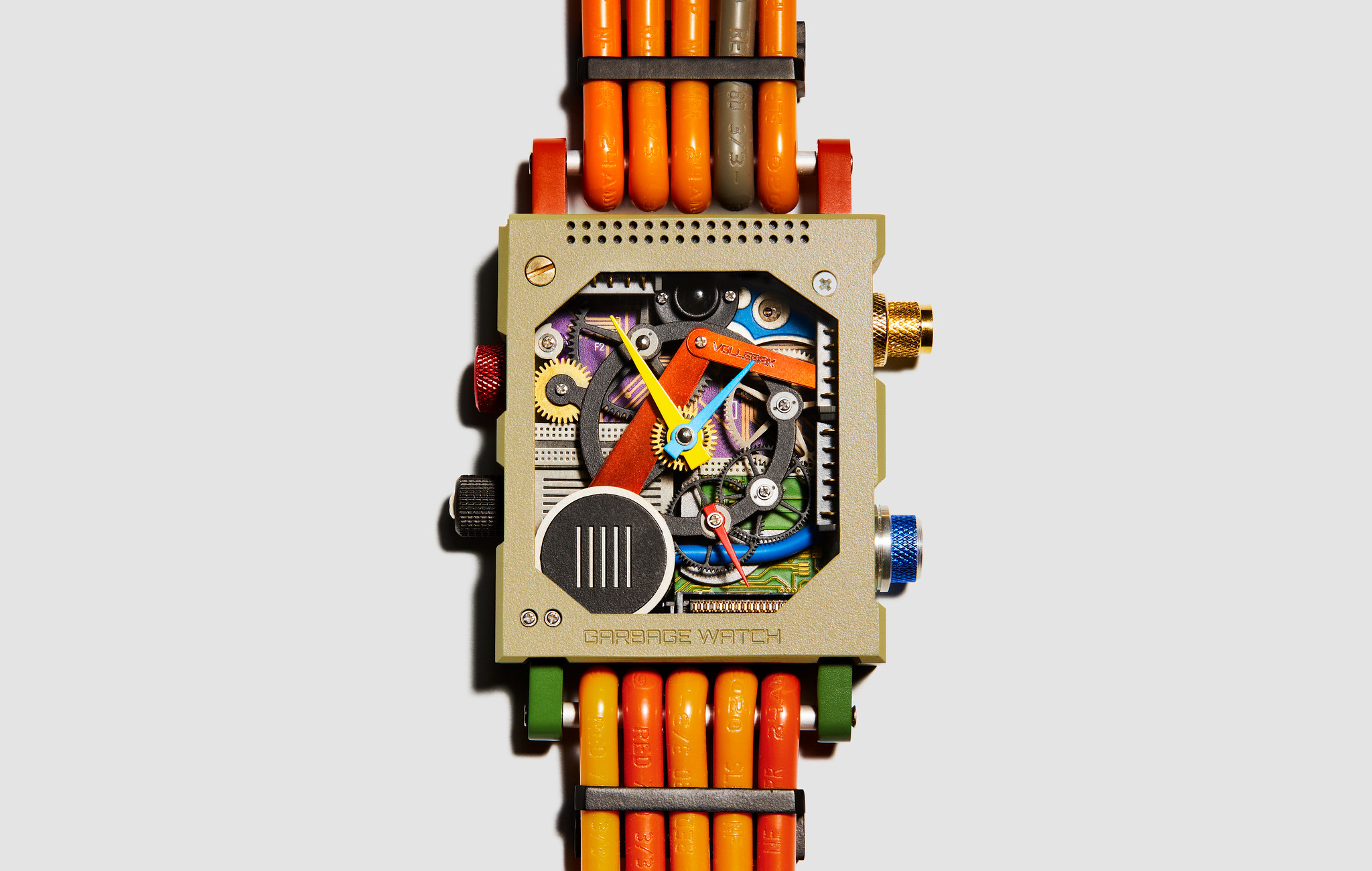 The Garbage Watch is a collaboration with Re-Made, a holistic recycling project from the design gurus at Wallpaper*, and more than the sum of its recycled parts. 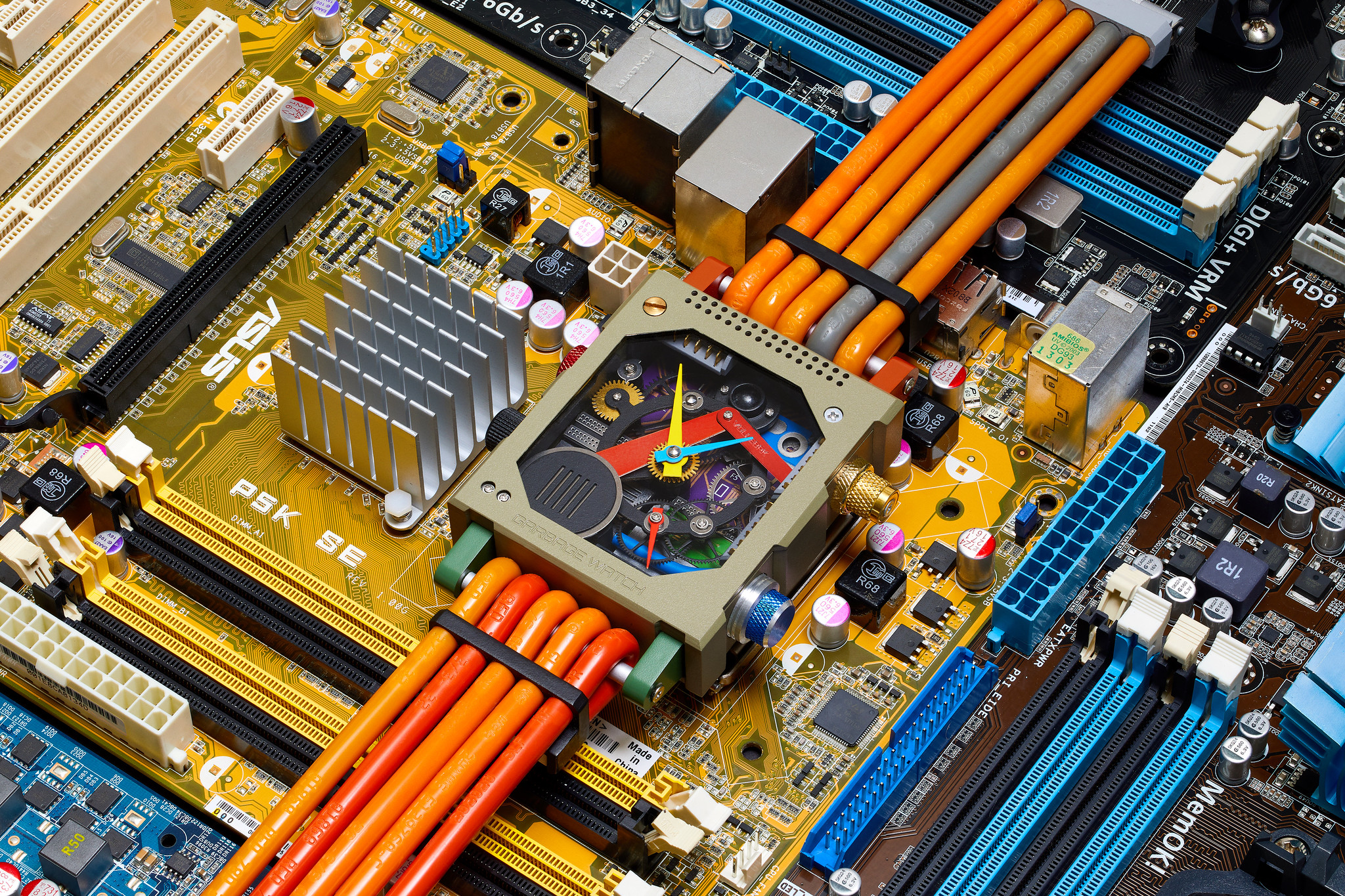 The watch will be ready for delivery in 2021 – with a waiting list sign-up initiating a journey through the design, recycling and production process concluding in a major talking point of a watch, with an intrinsic value. This watch is addressing a big cause: recycling the most damaging waste products known today, namely the 50 million tonnes of consumer electronics waste produced yearly. 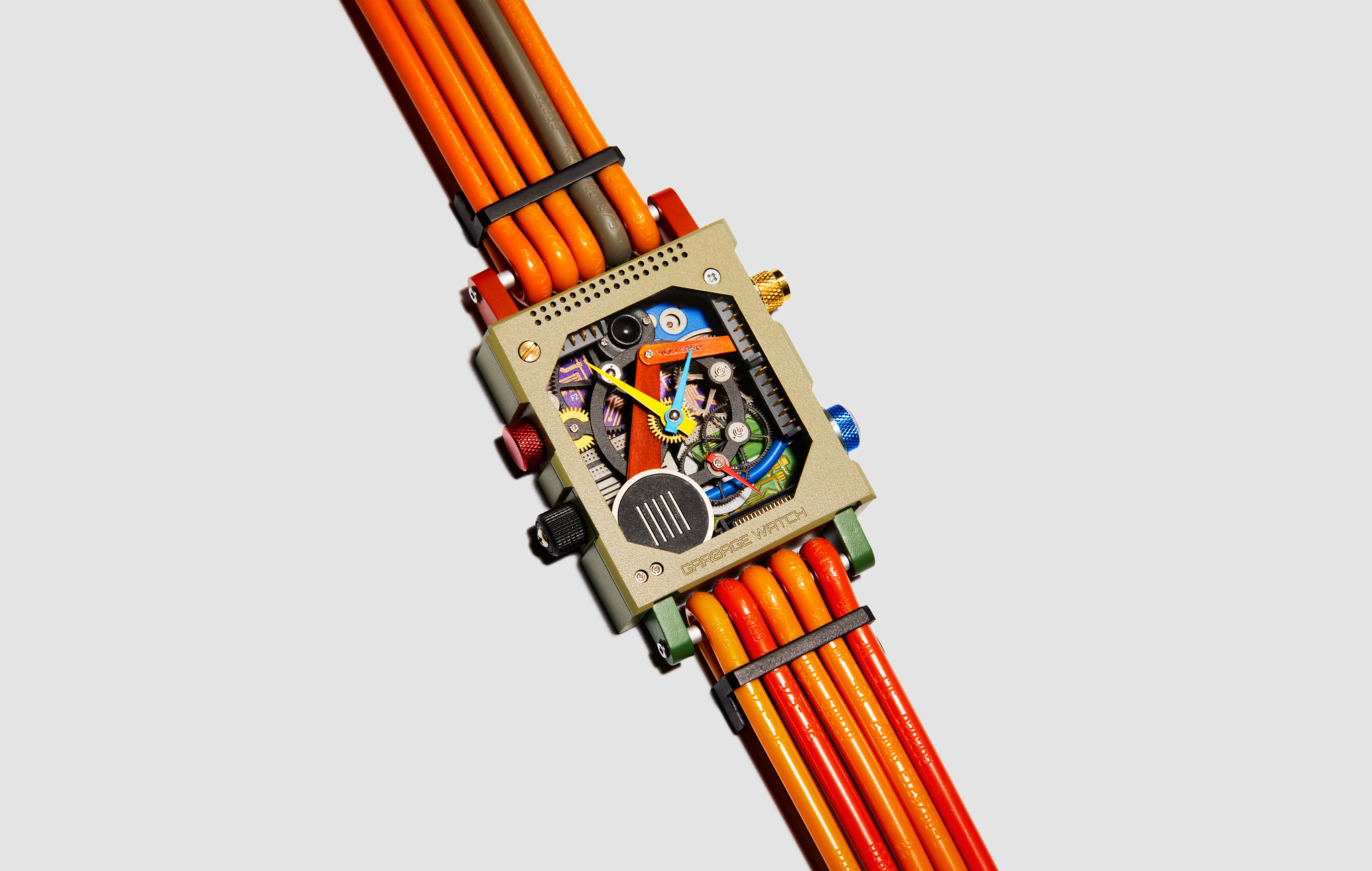 The watch itself is a brightly coloured mashup of electrical wiring, odd screws and parts from motherboards and microchips. The skeletonised dial reveals a time-only watch with a charming small seconds register at 5 o’clock and what looks like a mechanical movement based on a circuit board base plate, though this remains a mystery. With the watch being at the prototype stage, neither the size nor the details of the movement has been revealed. The movement parts are playfully arranged, and though I seem to notice some non-engaging cogs, we are still hoping for a mechanical movement. For the OCD-afflicted, the four coloured crowns and push buttons are disturbingly off-centre and odd looking, and we are also left guessing as to any extra functionality. But in their varyingly anodised, polished and knurled finish they look damn good nonetheless. 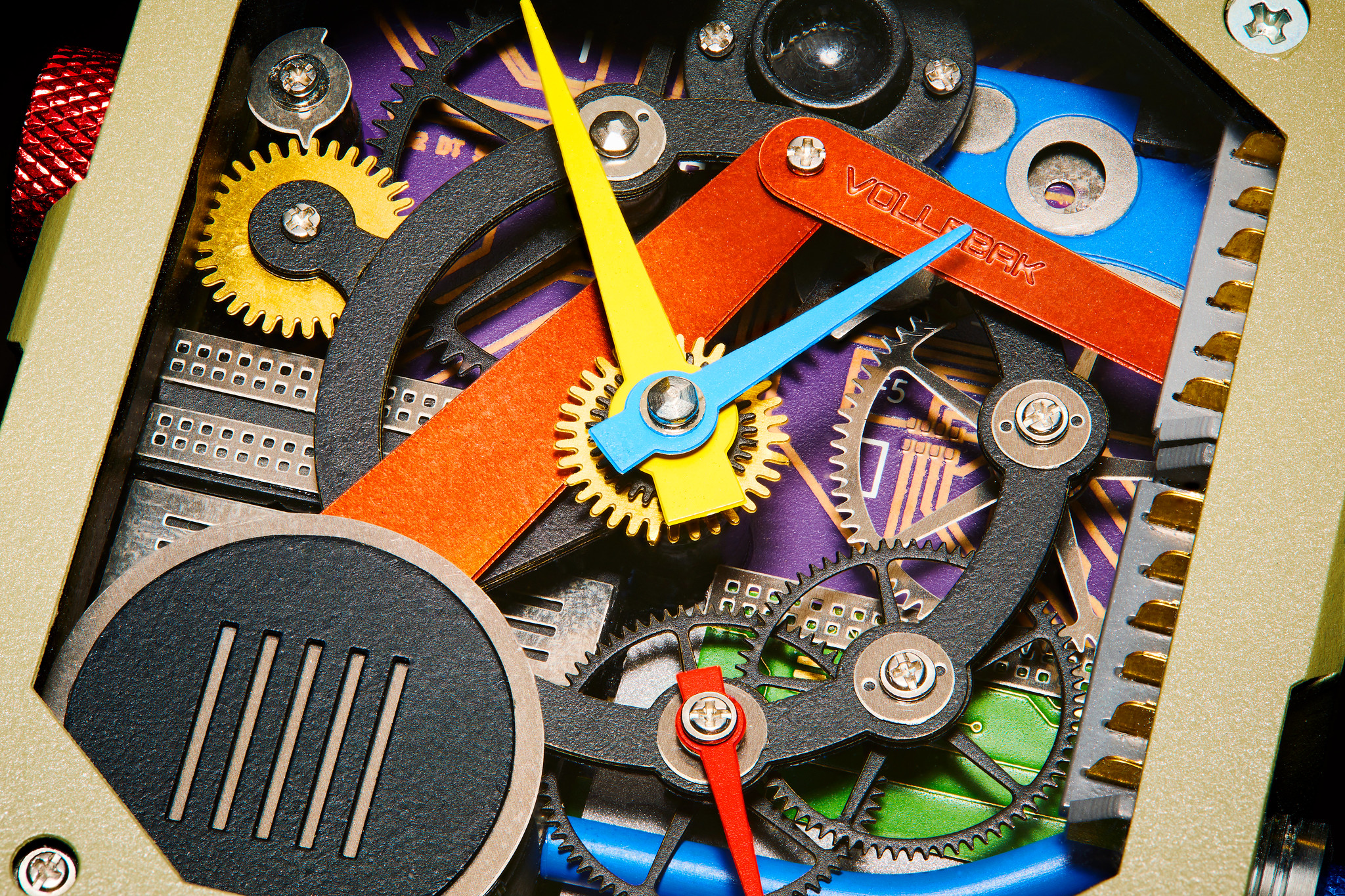 The heart of the Garbage Watch is a solid quartz movement under the caseback, with the case itself being a thick chunk of futuristic tooling. There is an architectural and rough industrial vibe underlined by a stamped logo, and the image is one of indestructibility. Simple but nice detail work endows the matt-lacquered surface with chamfered edges, a matt greenish colour and an octagonal dial opening. The case is bolted together from the front with odd-sized screws of different colours, a form follows function adage underlining the source of the materials. It would not look out of place on the wrist of Arnold in the dystopian sci-fi Total Recall from the ’90s and will grab the attention of anyone within 10 feet. 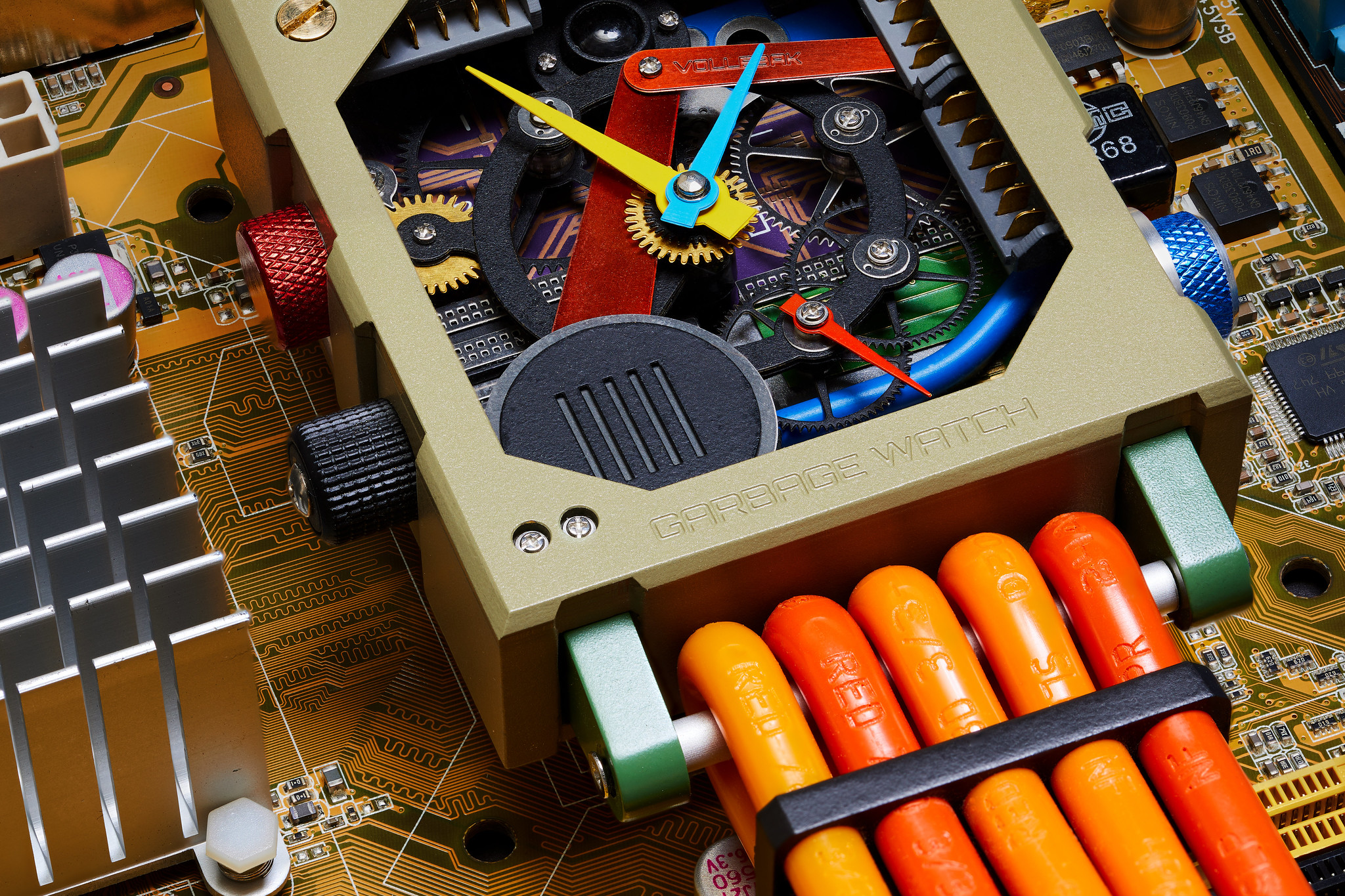 The “strap” is five charmingly cobbled-together electrical cables of odd colours, fixed to the blocky case with green and red lugs top and bottom, with an interesting-looking simple buckle. But, at the end of the day, view this more as a bold mission statement. It’s a tough yet charming piece of horological ice-breaking material, and maybe the benefits are two-fold? Engaging in a necessary dialogue with your friends and colleagues on the important backstory – while at the same time converting young environmentally focused smartphone addicts to the joys of horology. Mission complete.