Editor’s note: In the latest episode of Watch & Chill, we happen on the subject of Royal Oak Concept models for women, and after again seeing the footage of this extraordinary stepped dial sparkle machine, we had to give it its own post, and exploration.

Ask the average person what the purpose of a watch is, and they’ll say: ‘to tell the time’. Well, in the upper echelon of luxury watchmaking, this hasn’t been true for a very long time. Just as owners of supercars rarely reach their top speeds, the purpose of making a watch with absurd accuracy and attention to detail is the pursuit of perfection for perfection’s sake. There aren’t many better examples of this than the tourbillon complication, a work of intricate innovation that has been honed for more than 200 years, despite being technically unnecessary for the last century. So, if you take one of these useless features and put it into a watch with no dial markings, what do you end up with? The answer is one of the most visually striking fashion statements to be released in 2020 so far — the Audemars Piguet Royal Oak Concept Frosted Gold Flying Tourbillon. 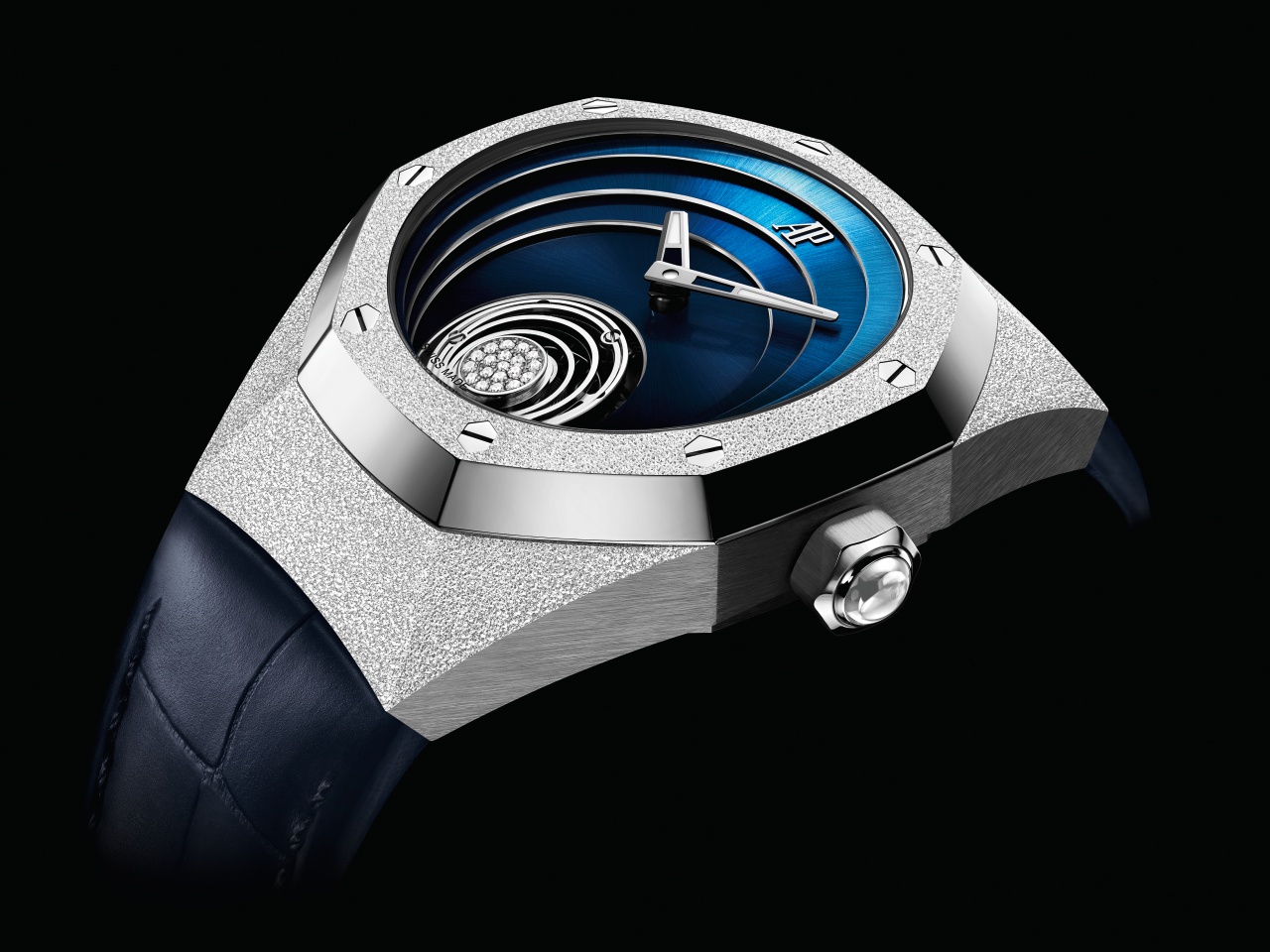 The Royal Oak Concept line has always been divisive and futuristic in intent, representing an even more extreme realisation of the original Genta design than the Offshore series, giving the artisans at Audemars Piguet a chance to flex their creativity and craftsmanship. The previous releases aimed at women have been eye-catching, but bombastic displays, with iced-out diamond cases, and openwork dials similarly encrusted with jewels.

To say the new Frosted Gold Flying Tourbillon models are restrained would be an overstatement, but they do represent much more of a classical elegance, rather than a bedazzling light show. The dial is deep in many ways, most obviously being the segmented circular layers. These not only create physical depth, but also cast extra shadows upon the sunburst blue dial, extending the contrast between the light, cold, baby blue, to the abyssal navy hues within the crevasses. 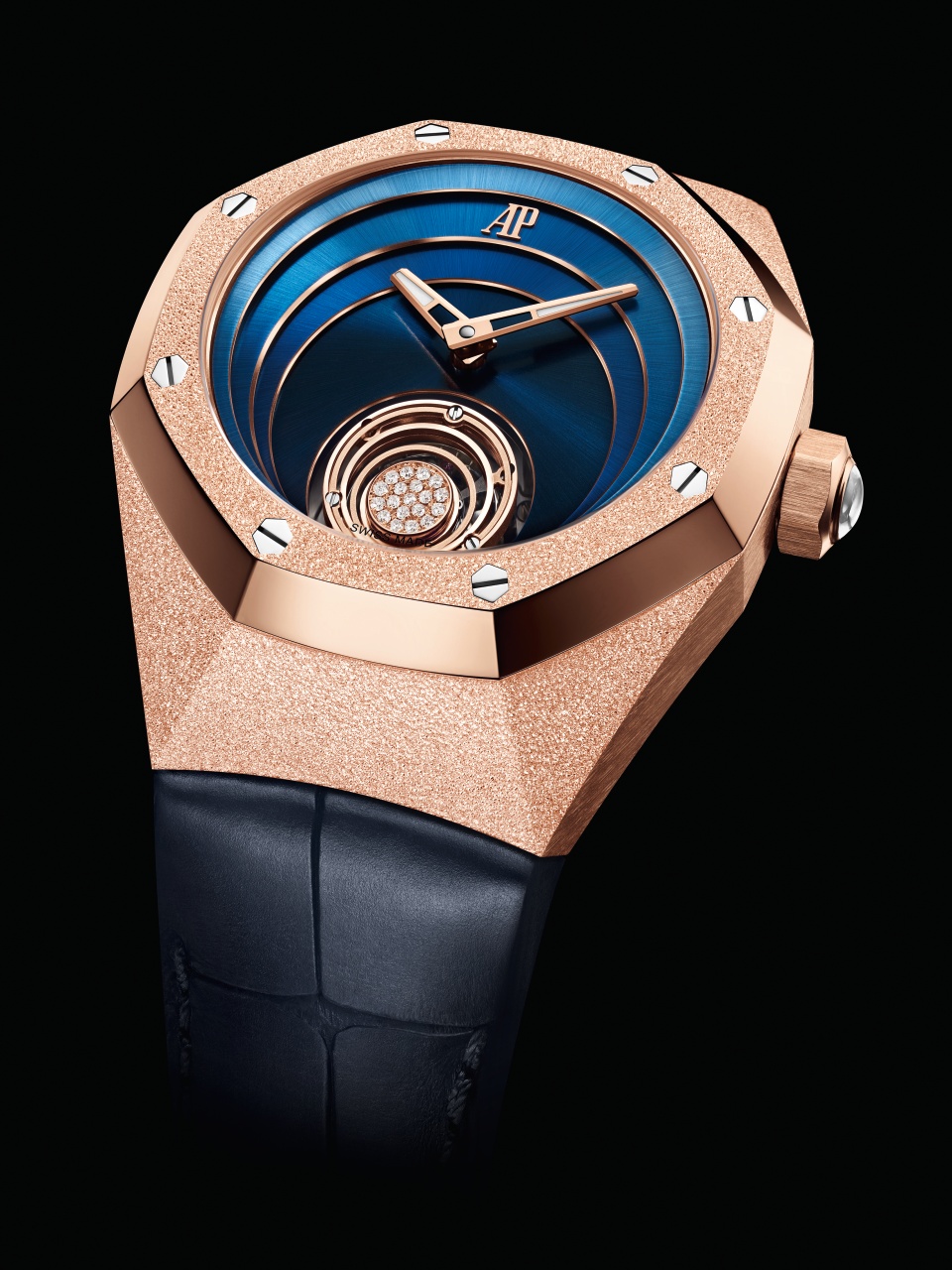 The 38.5mm case, in crisp white gold or sumptuous rose gold, has been given a hammered texture on the front surfaces, the stippling adding a hint of that glimmer that diamonds would give, albeit in a much more subtle way. The monolithic sculpture of the case makes it look as though it’s a giant, but its 11.9mm thickness and extreme curvature does make it very wearable. The sapphire crystal is also domed to match the profile of the case and bezel, which gives it a truly mystical distortion when viewed at lower angles. 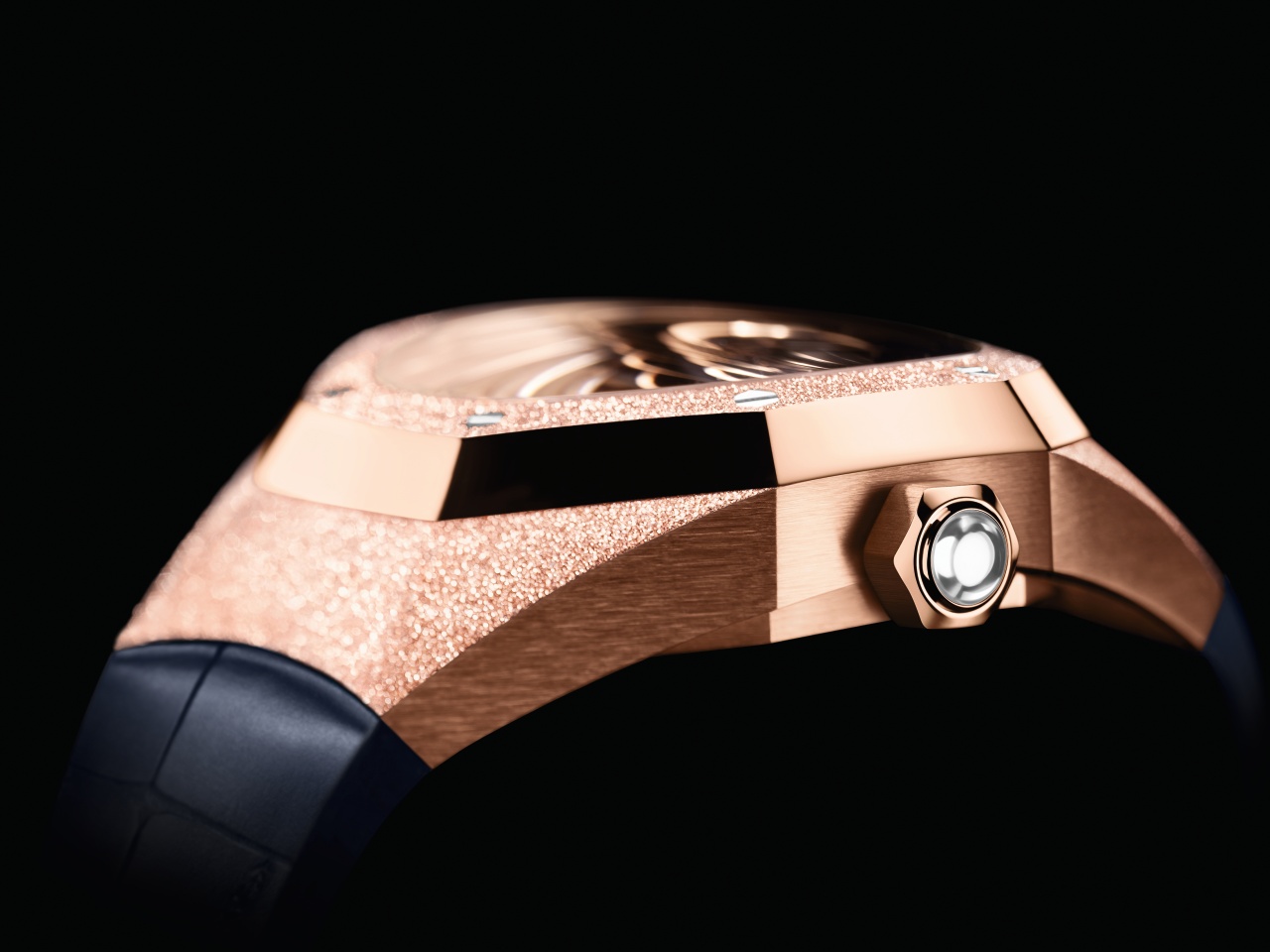 Of course, the real star of the show is the Flying Tourbillon. Continuing the theme of offset circles, the diamond-set cage rotates like a seconds hand, but instead forging a hypnotising display that could easily occupy the viewer for long stretches of time — perfect for procrastination. Combine that with the manipulative distortion of the crystal and the dancing of light on the case and dial, and you have the perfect recipe for a true spectacle whenever you move your wrist. 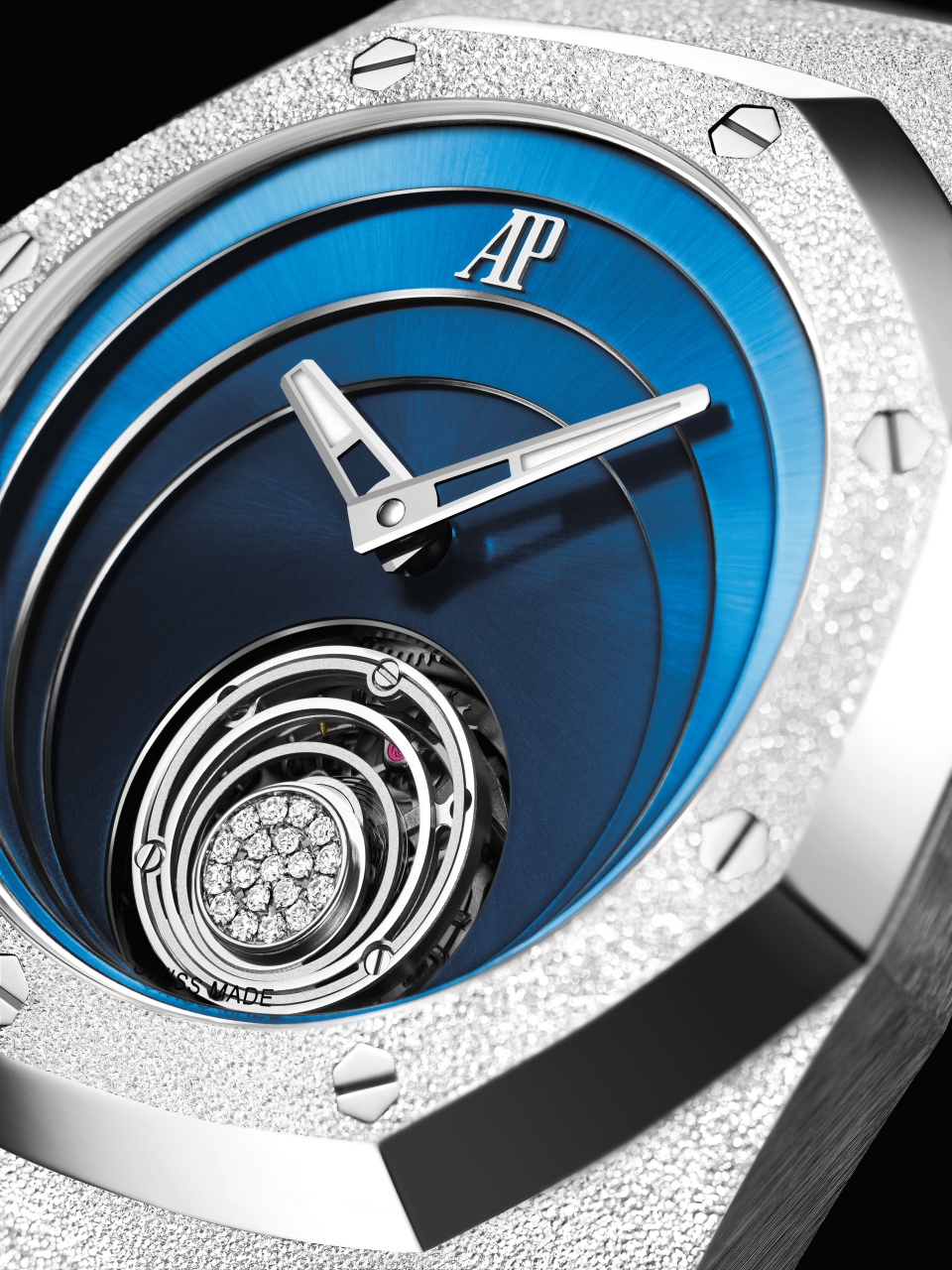 The display caseback is a visual feast, too. The hand-wound calibre 2964 isn’t decorated in the usual perlage and Geneva stripes we’re used to seeing on high-end Swiss movements, but a clinically machined architecture of circular segments with a hammered inner section and raised brushed edges. Along with the exposed mechanisms and surprising lack of jewels on display, this gives a surprisingly industrial and art deco impression. 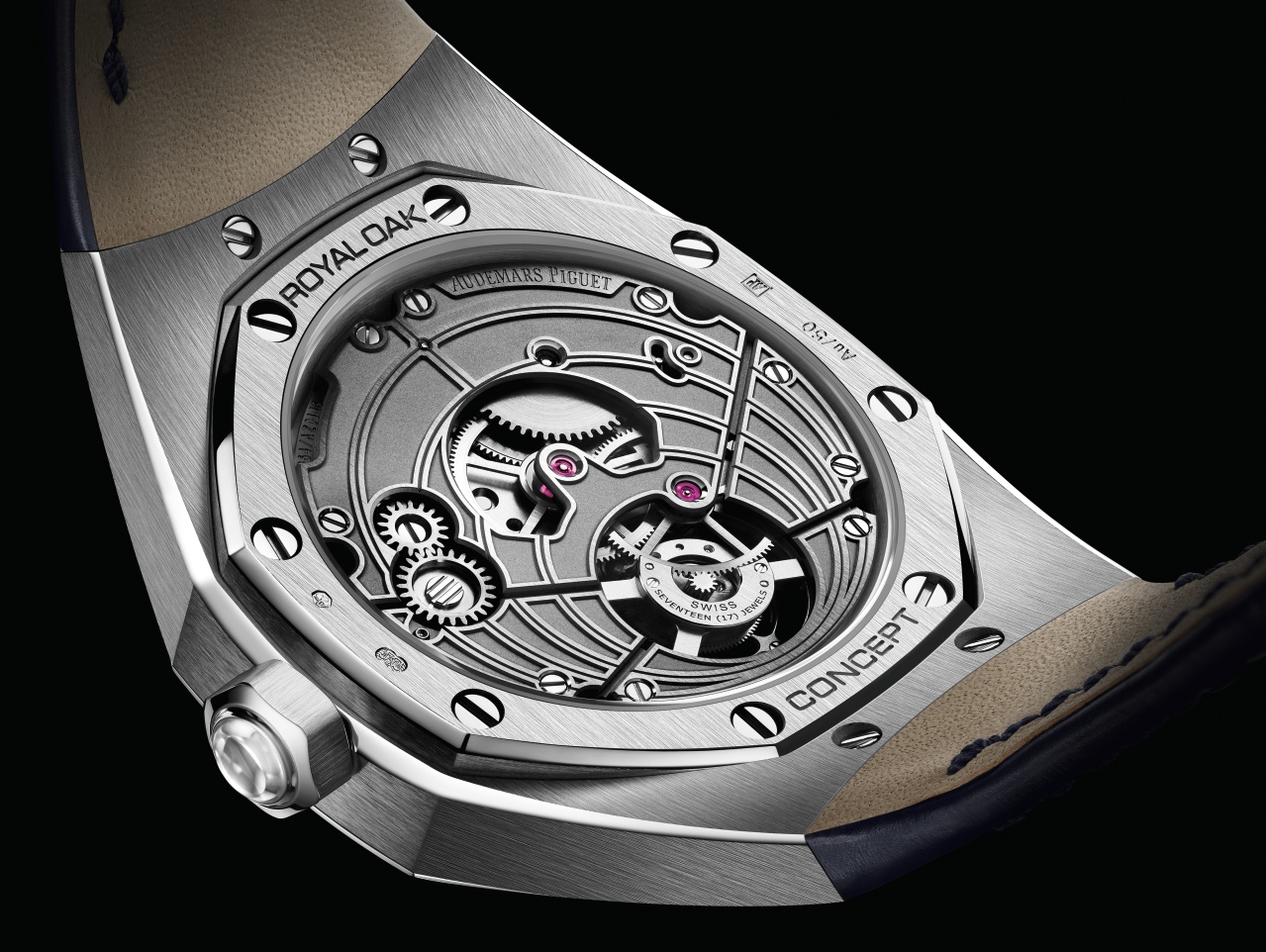 As much as this timepiece is marketed as a ladies’ watch, its dimensions and visual effect don’t completely rule it out from being unisex, as long as you’re okay with a bit of bling. The feminine aspect is certainly present, though the handset in particular, along with the classically brutish bezel and crown, make it far from dainty. The watch is supplied on an all-blue alligator strap with a matching gold buckle, and also comes with a glossy blue rubber strap should you wish to make it look a bit more sporty. 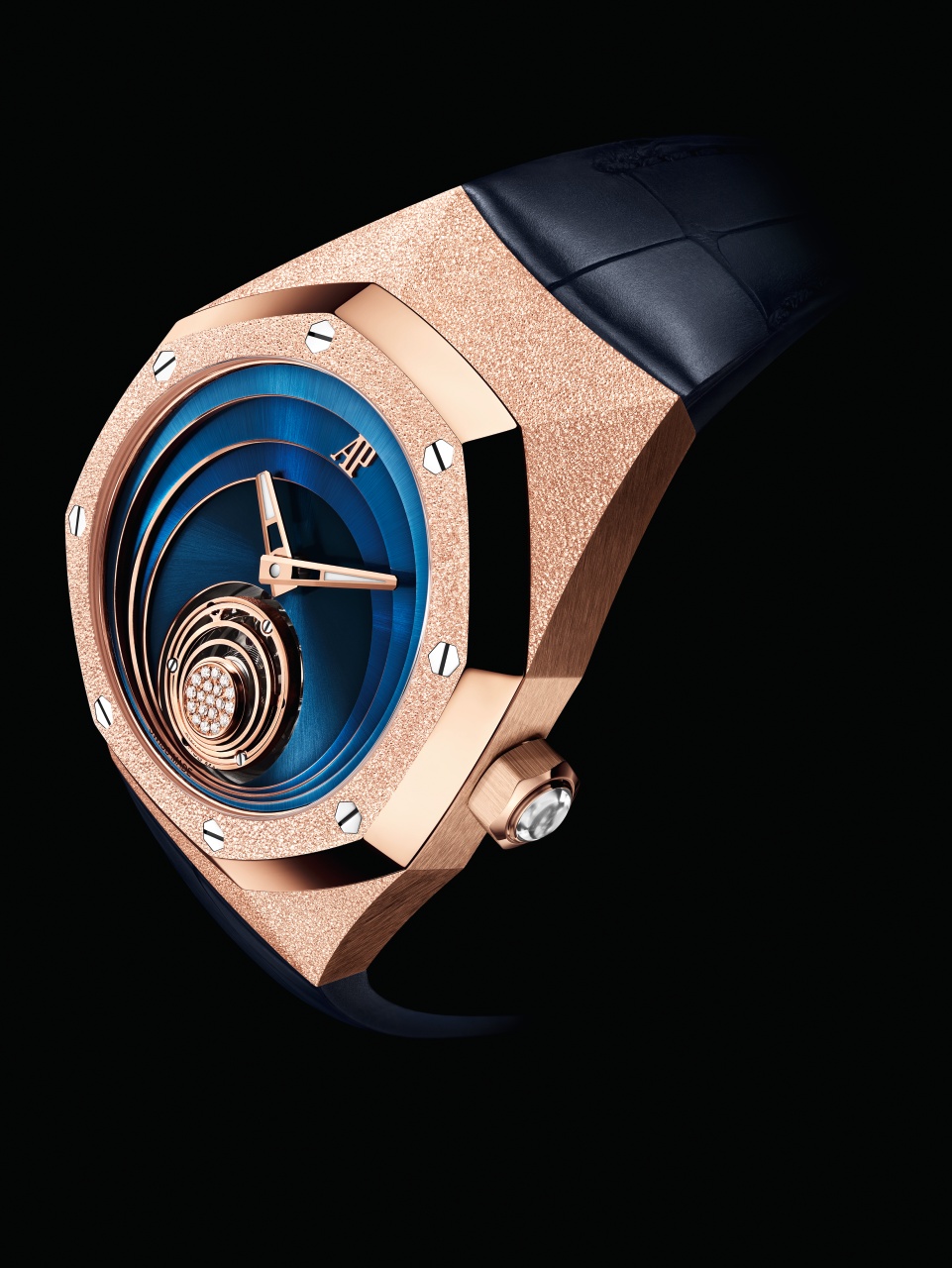 So while the Audemars Piguet Royal Oak Concept Frosted Gold Flying Tourbillon does fill the criterion of simply telling the time, it does so in such a supremely elegant and articulately designed manner that the time-telling almost becomes secondary. Almost.