The Rolex brand is older than the city of Canberra, a fact that shows not only Australia’s youth, but, by contrast, just how old watchmaking really is. It also surely makes Canberra one of the least likely places on earth to find someone in their mid-20s making a tourbillon pocket watch. Enter Reuben Schoots … 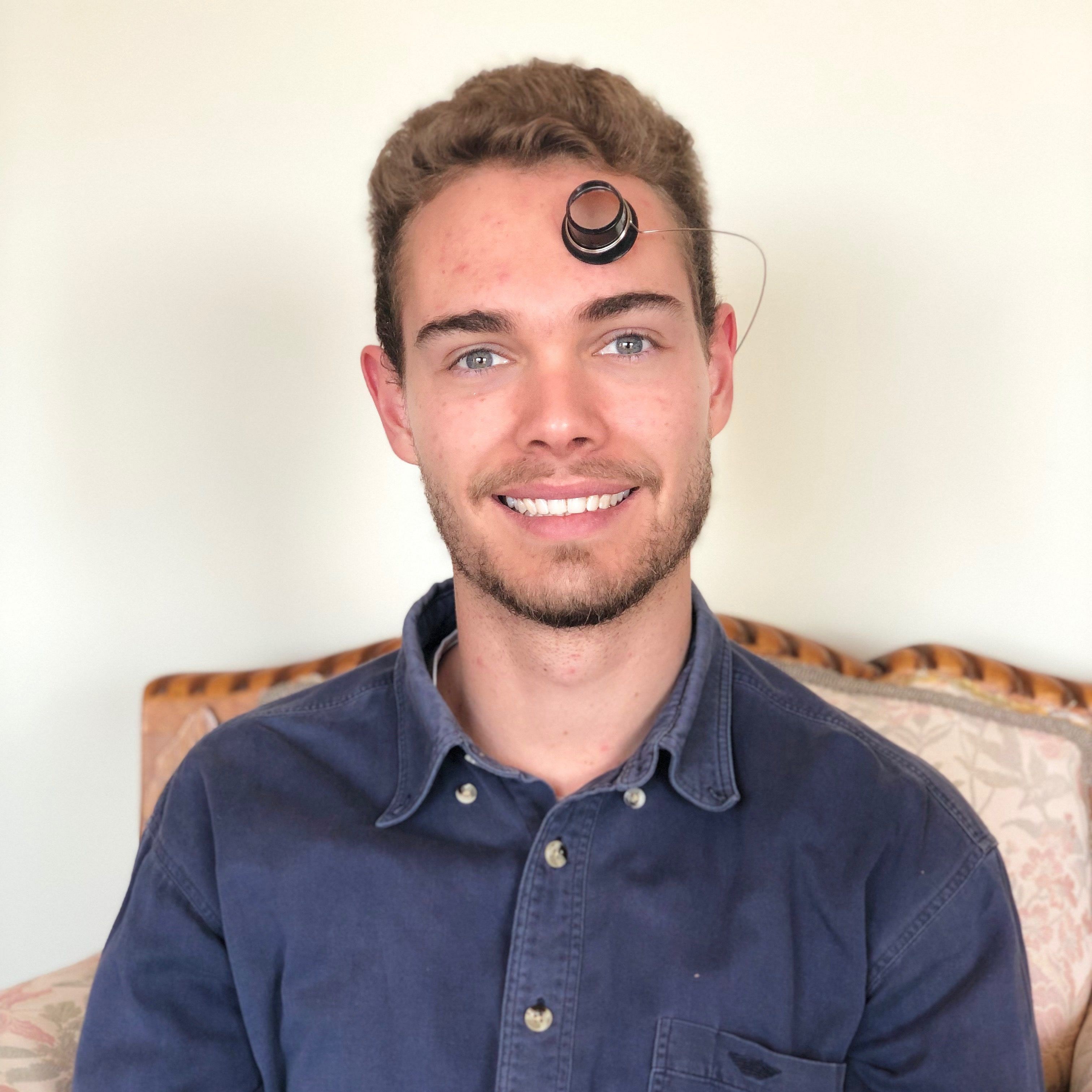 Hidden away in his workshop, Schoots is working on a project that has likely never been attempted before in Australia. He is creating a pocket watch following the George Daniels method. That means entirely by hand. His prediction is that the watch will take around 3000 hours to complete, a pace that probably outstrips the bureaucratic processes of the nearby Parliament House. 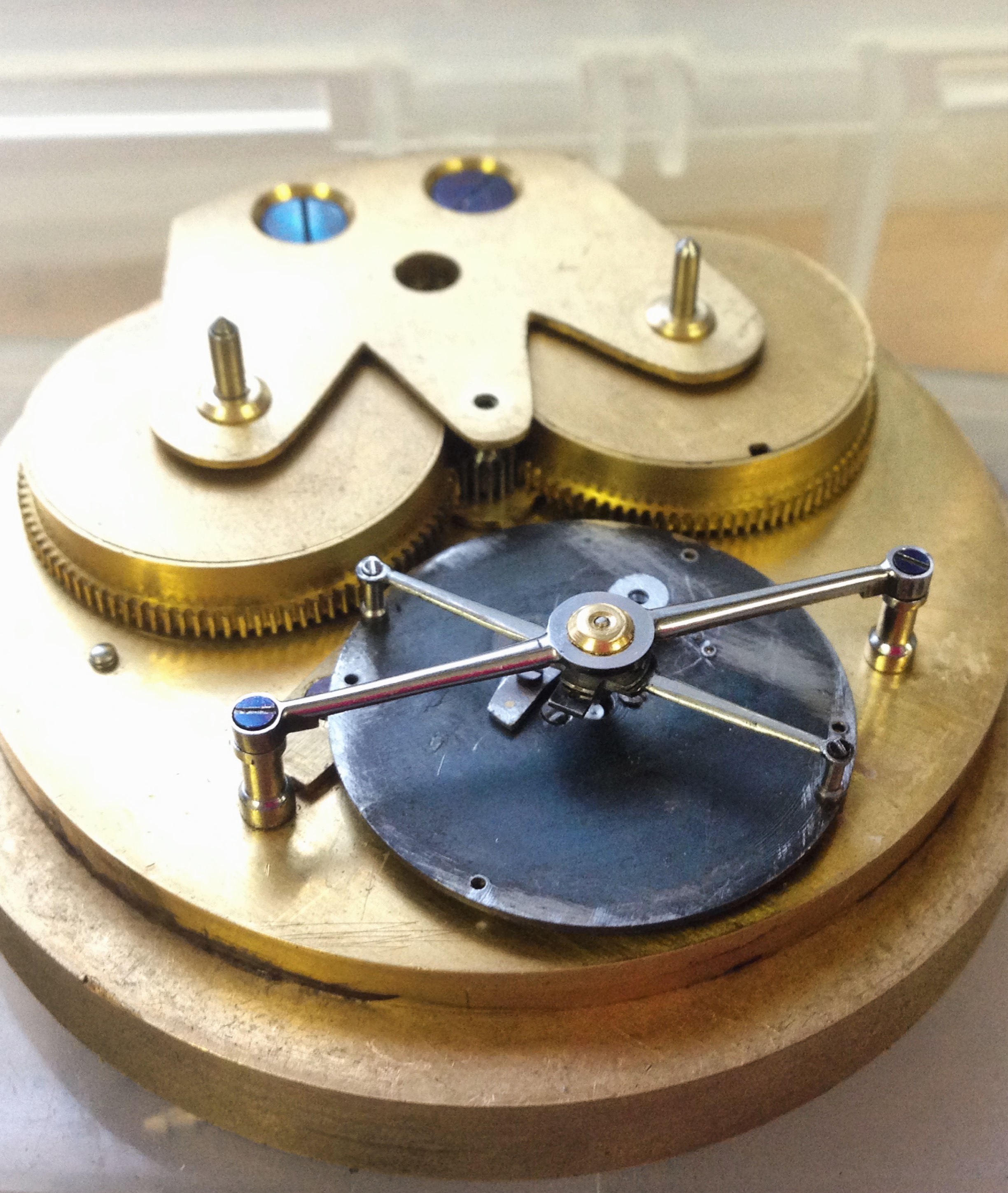 What is most interesting about this likely to be first-of-its-kind mission is that it is being undertaken by a 26-year-old who seems to possess the patience of a Stoic philosopher. He has been interested in mechanics since a young age, helping his dad with the restoration of a 1961 Triumph TR4 when he was just eight. While there are obvious similarities between vintage cars and vintage watches, it was almost by accident that Schoots was introduced to horology. 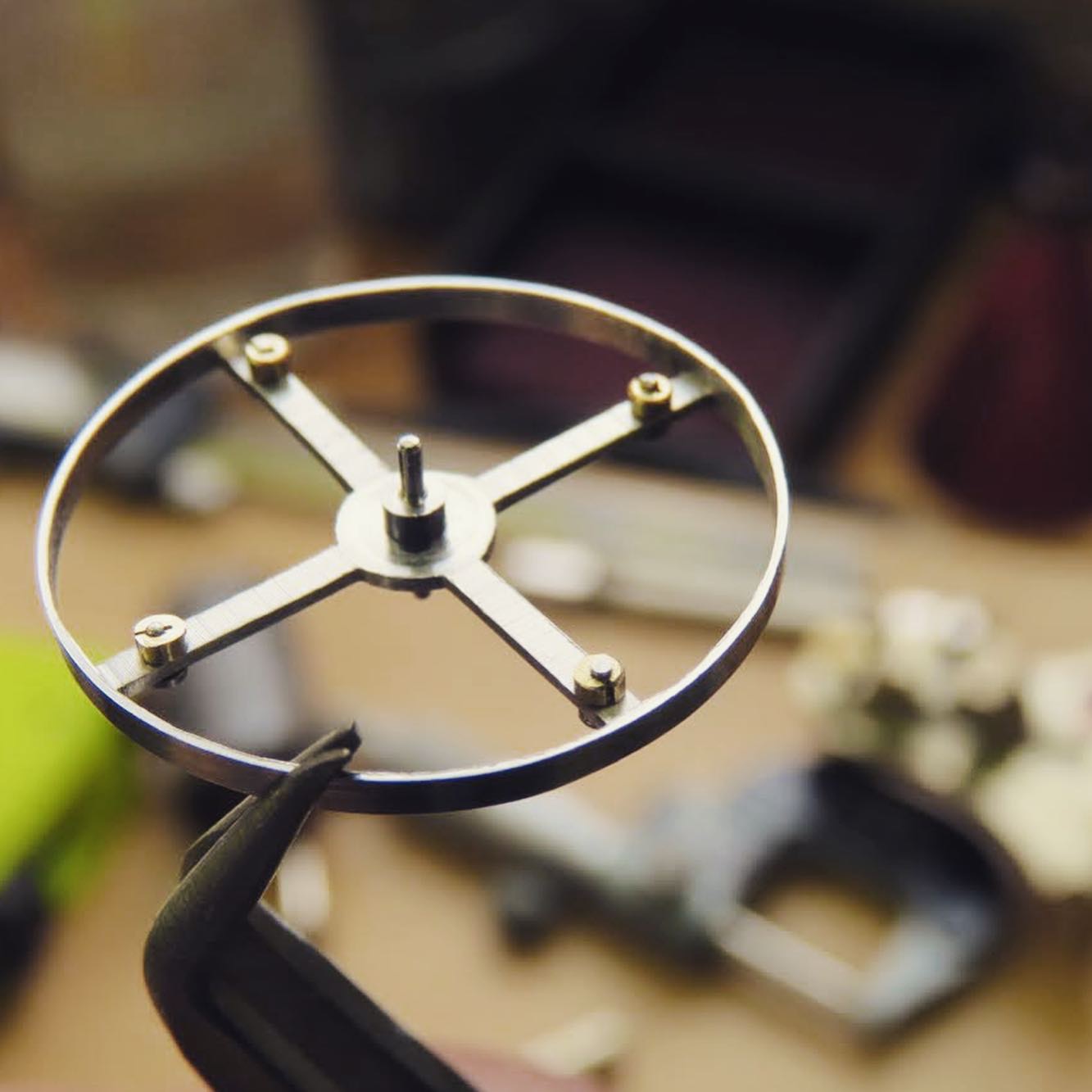 “I travelled to South America in 2015 and caught a tropical virus that damaged my immune system,” he says. “It took me over two years to recover. It gave me a lot of time to spend thinking about life, and what I would do with that life if I had an opportunity to be back to full health.” 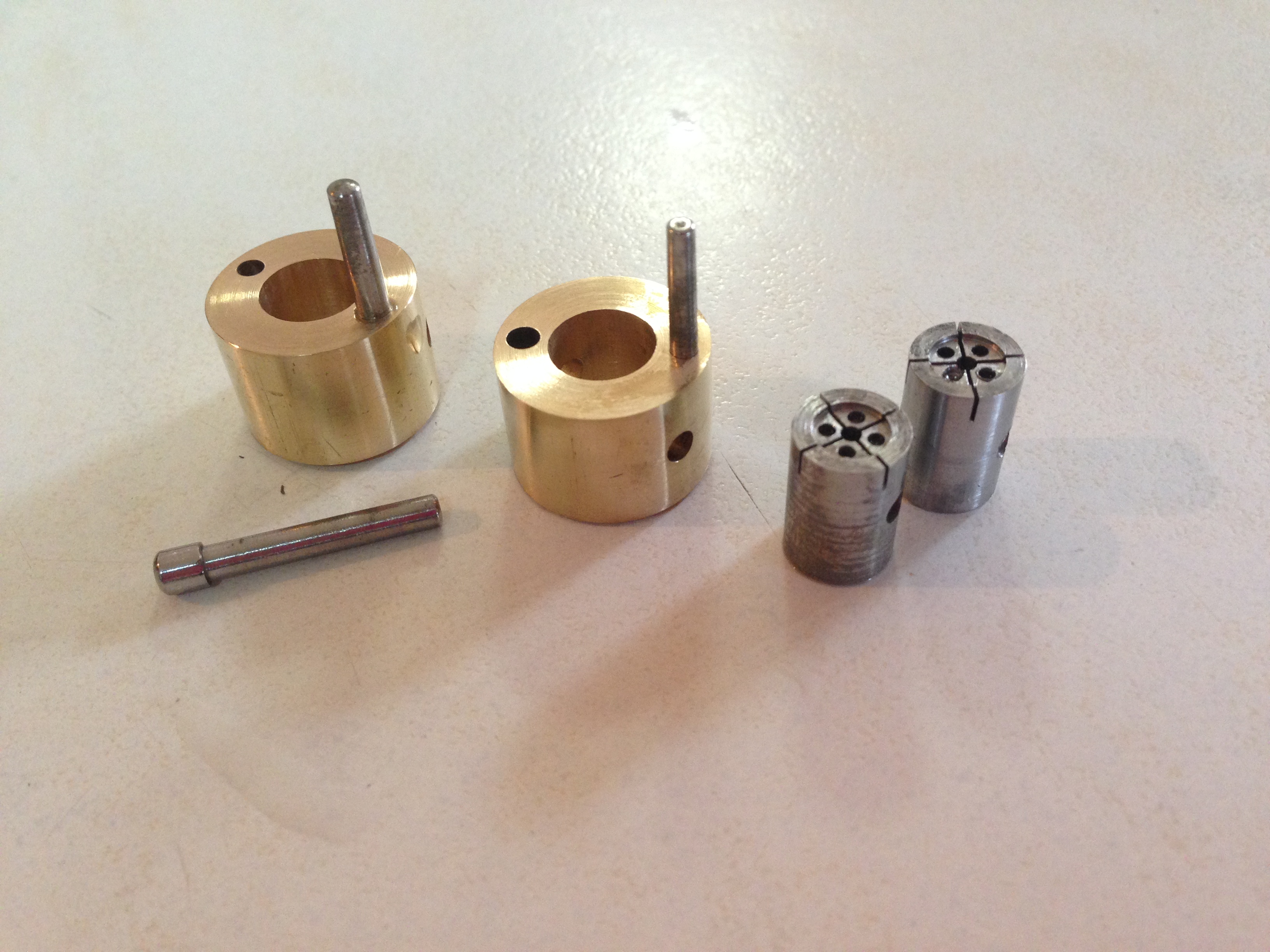 Punch, stamp and die made by hand to punch escape wheel blanks.

During his recovery period, a friend loaned Schoots a book on watchmaking, which he devoured. It didn’t take long before he came across the work of George Daniels, and his ambition then began to take shape.

“It came down to wanting to do something meaningful, that could become a lifelong challenge. Once I discovered George Daniels, that’s when things really changed for me. It was immediately apparent in that moment that watchmaking was what I wanted to be doing.”

His passion for Daniels’ method comes from Daniels’ ability to combine the greatest watchmaking innovations of the past two centuries with what he considers to be the most beautiful designs of all time. In a blending of form and function, Daniels was an example “of a man who was an artist, so he knew how to make something beautiful, but he was also a mechanical genius”. 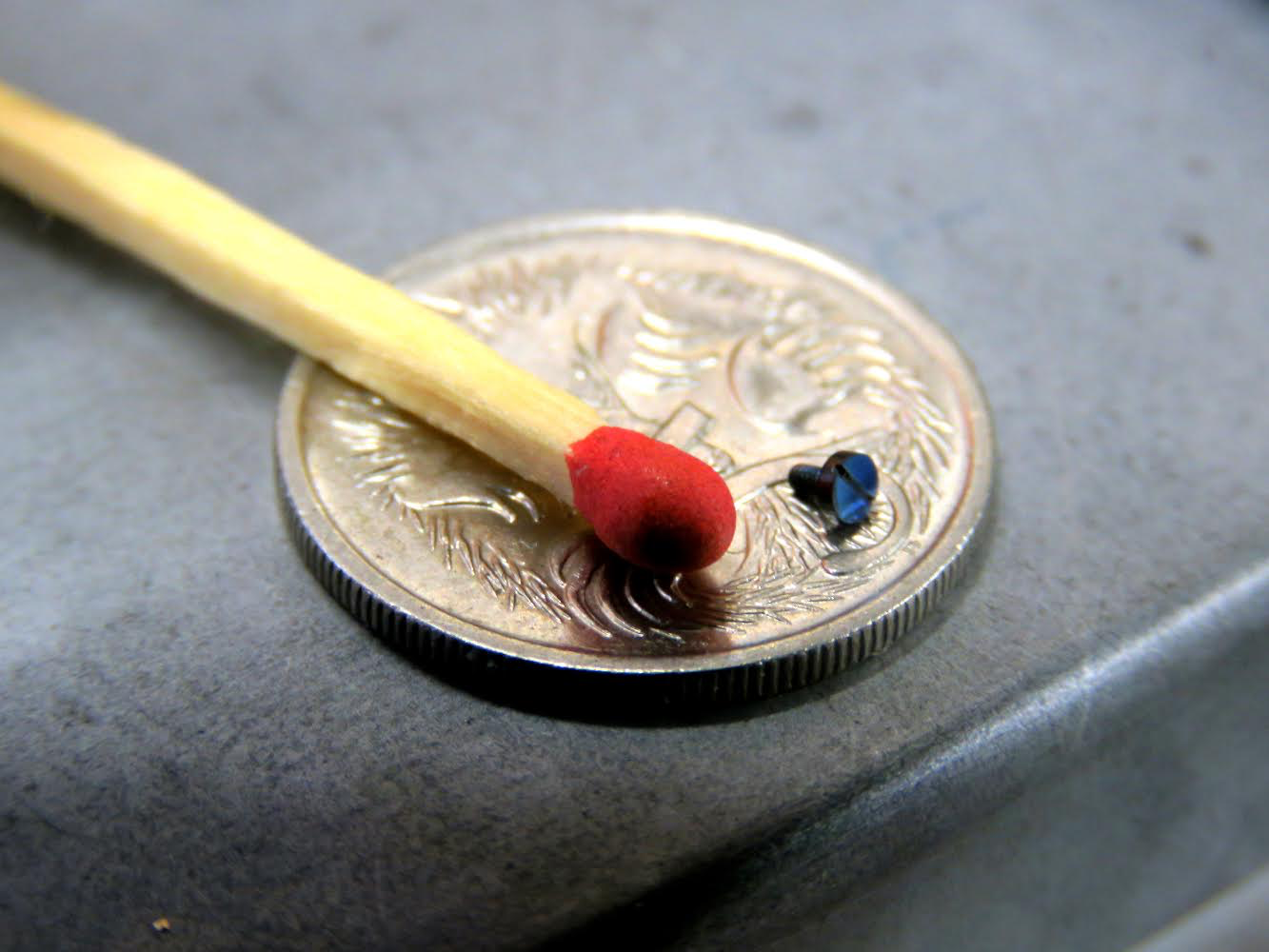 A 0.74mm flame blued screw with a match for scale.

As Schoots returned to full health, he reached out to the local community of watchmakers, and found tremendous support for his vision. It was here that he found his mentor.

“I met a man called Lindsay Drabsch, who was an engineer at the CSIRO. His job was basically to solve engineering problems that no one else could solve, generally by building his own tools and machines.

“We got chatting about what I was trying to do, and he offered to show me his workshop. He’s definitely another George Daniels character in my life.” 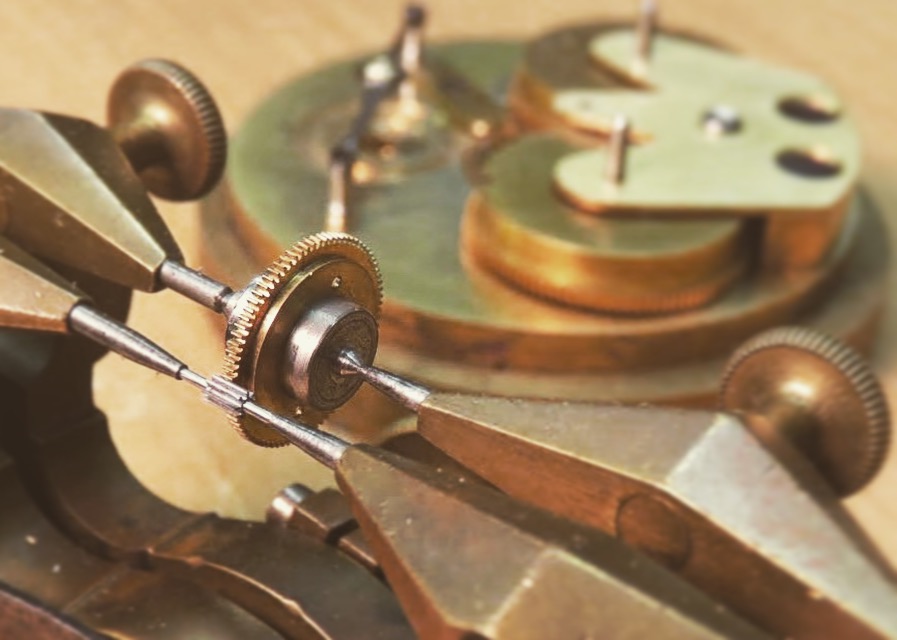 Making the fourth wheel of the movement.

Evidence of Drabsch’s brilliance can be found as far back as 1997, when the New Scientist covered his invention of a machine that helped with the classification of insect species. Drabsch is clearly not your average engineer.

“If I need to make a specific part, I can go to Switzerland and get a second-hand machine for 30 or 40 thousand dollars, or I can speak to Lindsay. He is the kind of guy who goes, ‘Cool, I know how to make that.’ We have made almost all of my tools, which has been invaluable experience in itself.” 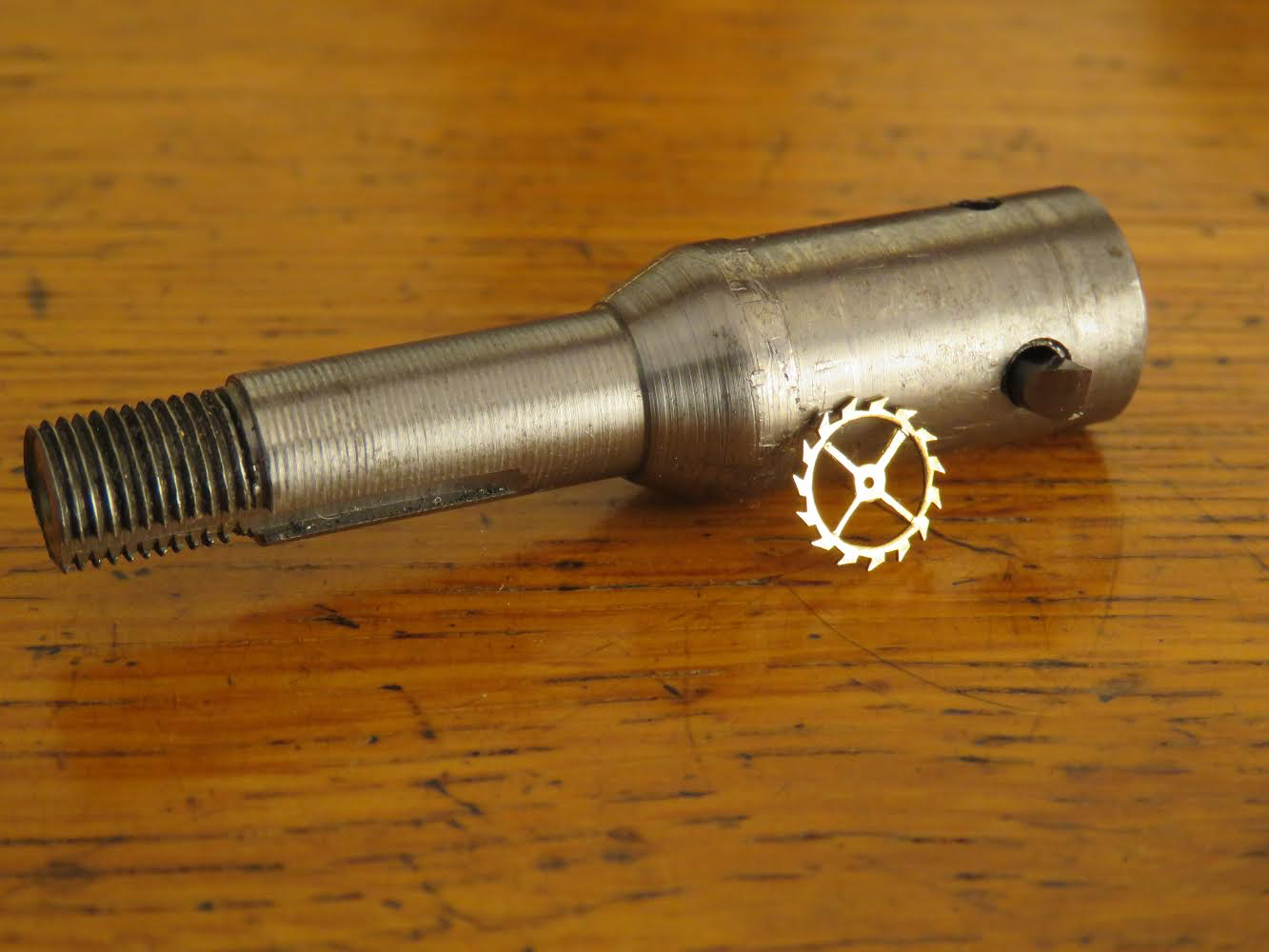 Having a brilliant mentor has helped Schoots’ progress, but it has still been filled with challenges. Observing his response to the hurdles that he has had to overcome, you are reminded that Schoots is a man who has been forced to consider life as an impermanent situation.

“There are lots of things I’m learning about the mindset of responding when something is hard. Most people start thinking that thing is impossible; it isn’t, you just have to walk away and think about it.

“Without a doubt the escape wheel is one of the most difficult things to make in a watch. I don’t know how many of them have ever been made by hand in Australia, but I doubt more than five. Honestly, I’d like to say it didn’t take me too long, but I’ve been thinking about it or working on it for six months.” 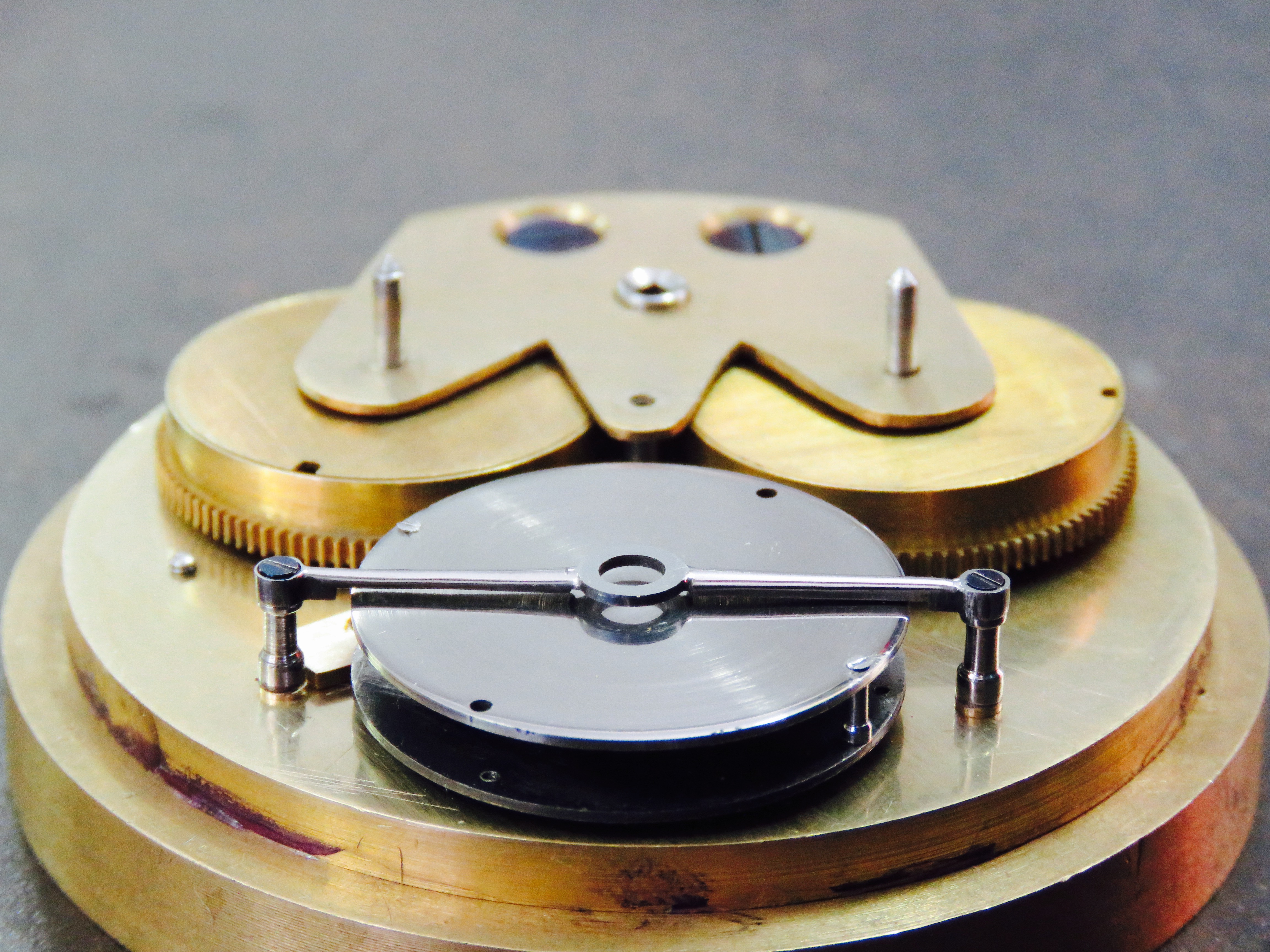 The back of the pocket watch movement.

“Making watches by hand is a big deal. If you analyse the situation, you say, ‘It’s going to take me three years of full-time work to make a watch,’ which is a big gamble. However, looking at the watch industry over the last 50 years, from when the quartz crisis occurred to when Daniels revived the mechanical timepiece, and where it is now, the industry is bigger than it’s ever been. 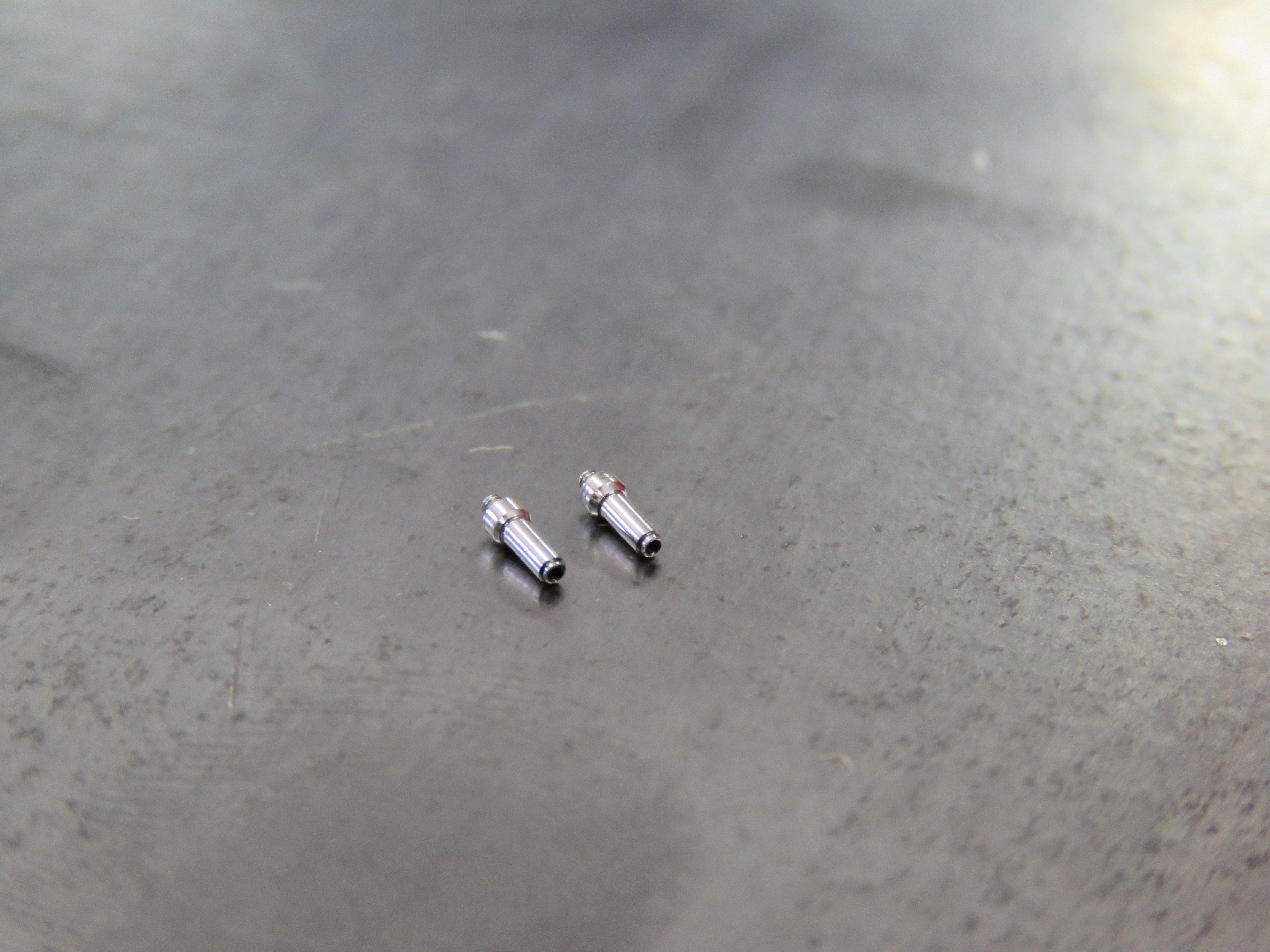 Tourbillon carriage pillars. They are 0.9mm in diameter at the widest point.

“No one thought mechanical watches would survive. If you asked people in the early ’90s, they would have told you that watchmaking was finished. But now there are successful watchmakers like Roger Smith, which makes me really think it’s possible. There are plenty of wealthy collectors in the world, and I feel like if you’re offering a product that is truly different and truly handmade, a collector will want that. And that’s a gamble I’m willing to take.

“My biggest goal is to help keep watchmaking alive and contribute to the world of horology. I really want to be making handmade watches without automated machinery, just like Daniels and Breguet did. I find something really beautiful in how long the process takes, because there is so much meaning to be extracted from the journey. I like the idea that you can sit down for a while and make something tick. Handmade watches in Australia is what I want to be doing.” 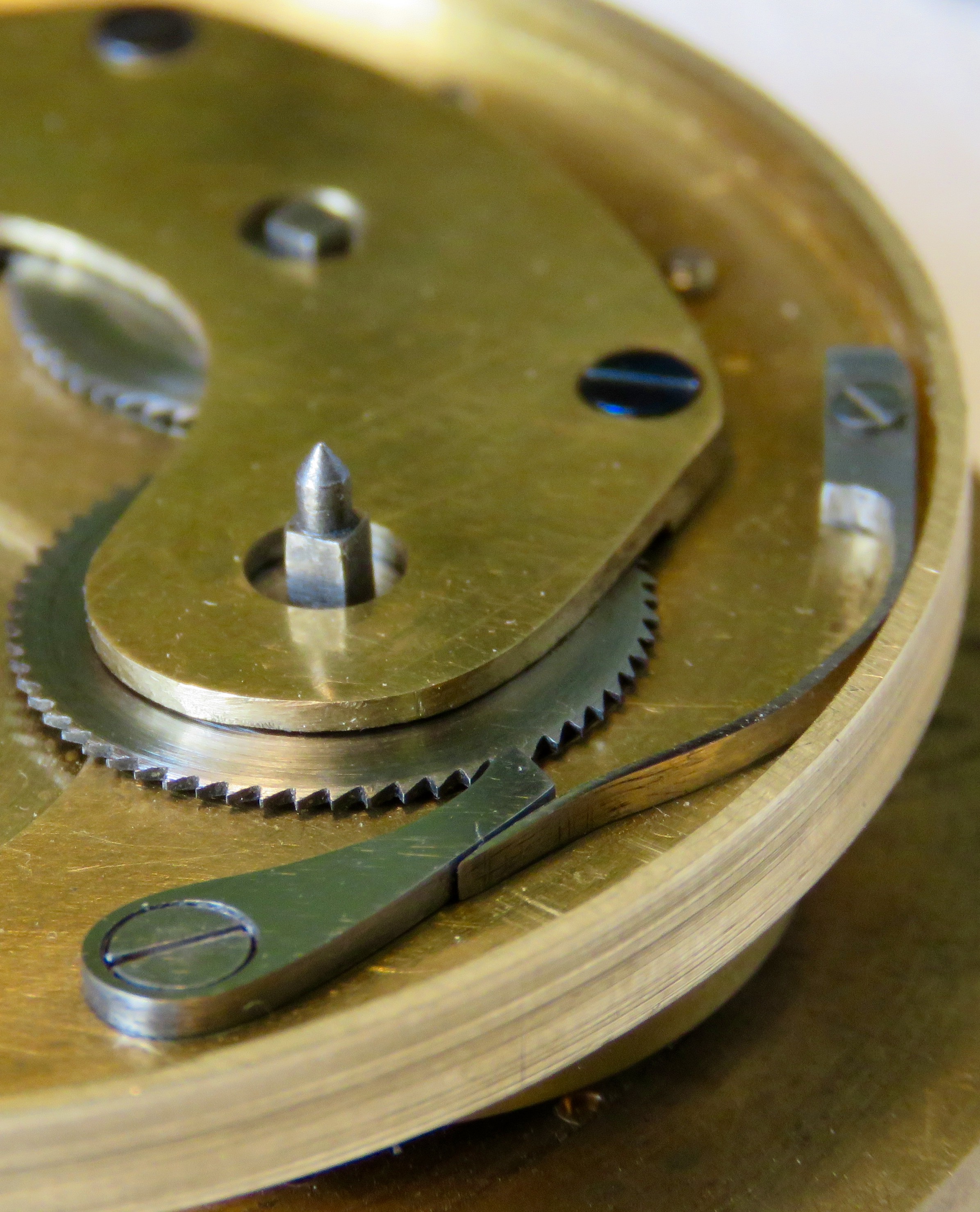 Dial side of movement – click/winding works.

On the more immediate horizon, however, Reuben Schoots is hoping to receive a blessing from the living steward of the Daniels method.

“At some point, I will also have to make a visit out to the Isle of Man, to try and receive rite of passage from Roger Smith,” said Schoots. “I’ve spoken with him briefly, and I know that once I finish this pocket watch, he is interested in taking a look at it.”