With a slender profile, top-notch movement and a dial to die for, the Slim d’Hermès has a lot more going for it than just the name. 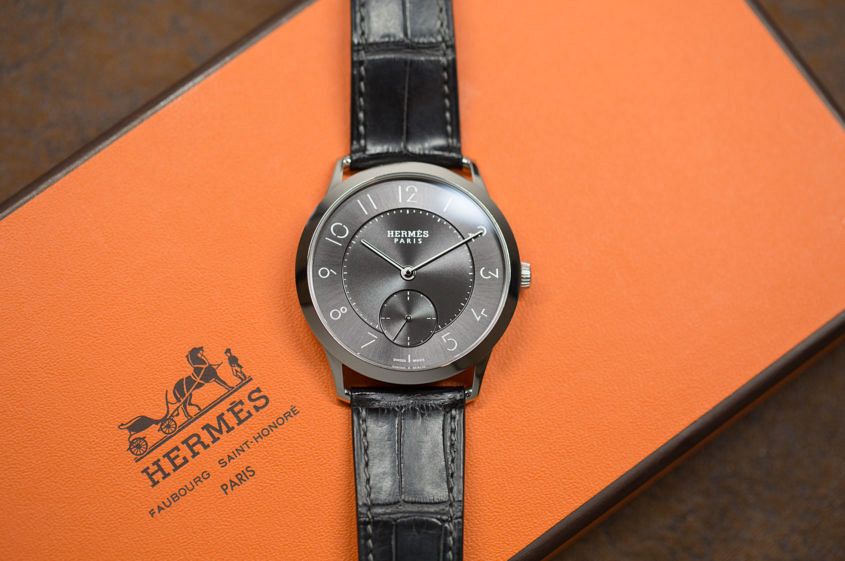 Hermès might be better known for its much-coveted Birkin bags than high-end horology, but the Slim d’Hermès looks set to change all that. First unveiled in 2015, the watch has evolved this year with two new dial variants in slate grey and blue – and when we tried to assign this piece, both Ceri and Felix wanted it, and wouldn’t let it go. Our first solution was to let them wrestle it out on the office floor, which would have produced some compelling video footage, but then we remembered we’re grown-ups. So, instead, here they are comparing notes on how the French house’s confident, characterful timepiece might well be the start of a new chapter when it comes to fashion brands playing in the watch world. 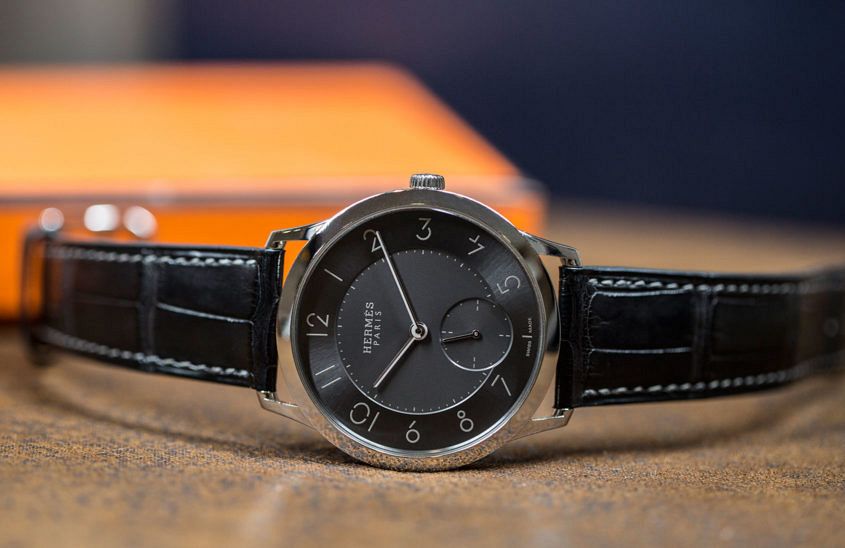 Felix Scholz: Hermès has made a few interesting watches in their time, notably the Dressage L’Heure Masquée, Le Temps Suspendu and the Arceau – and the super-straight Slim plays it safe in comparison. This isn’t a bad thing. Prior to the Slim, I’m guessing the largest market for Hermès watches would have been people who loved the brand first and foremost. This watch is different – it’s a legitimate and interesting alternative to offerings from Piaget, JLC, Cartier et al. 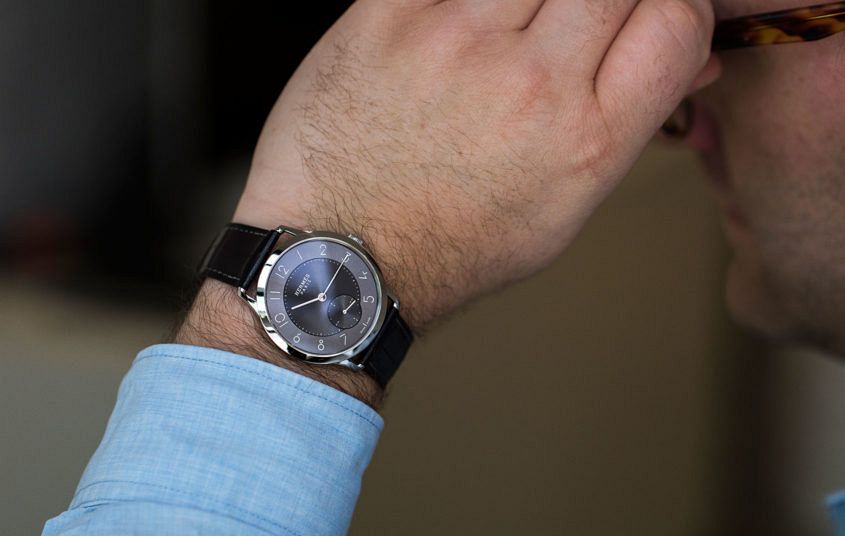 Ceri David: I agree, it’s brilliant to see how well this has been executed. Far from the concept of just a ‘fashion watch’ – which was never much more than an accessory – this is the genuine article. Sleek and minimal, as the name suggests, it’s by no means flat, and it definitely has presence on the wrist. I found the 39.5mm to be a fairly unisex size, though Hermès also offers a smaller version with a white dial, for the really teensy-wristed. I prefer more of a statement, myself, so I could see myself buying this model for my husband on the (unstated) proviso I could borrow it from time to time. 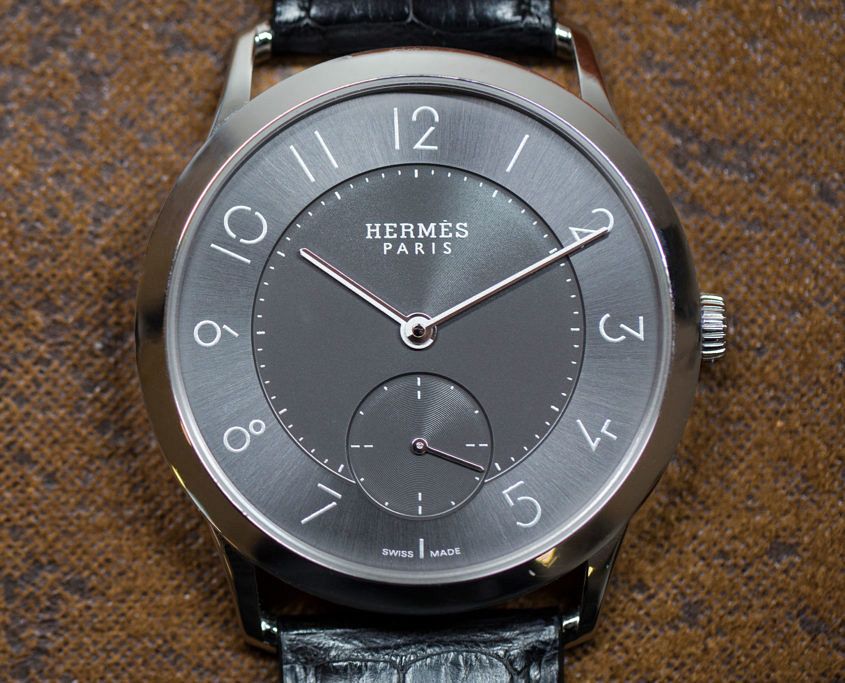 CD: There’s a real sense of space on this dial, which is uncluttered without venturing into ‘boring’. A lot of that is down to to the font – created for Hermès by French graphic designer Philippe Apeloig – which is just beautiful, really expressing the artistic playfulness the brand is known for. Seriously, I could gaze at that number 3 forever. Meanwhile, the minute markers make it easy to tell the time at a glance, so it’s far from just pretty. 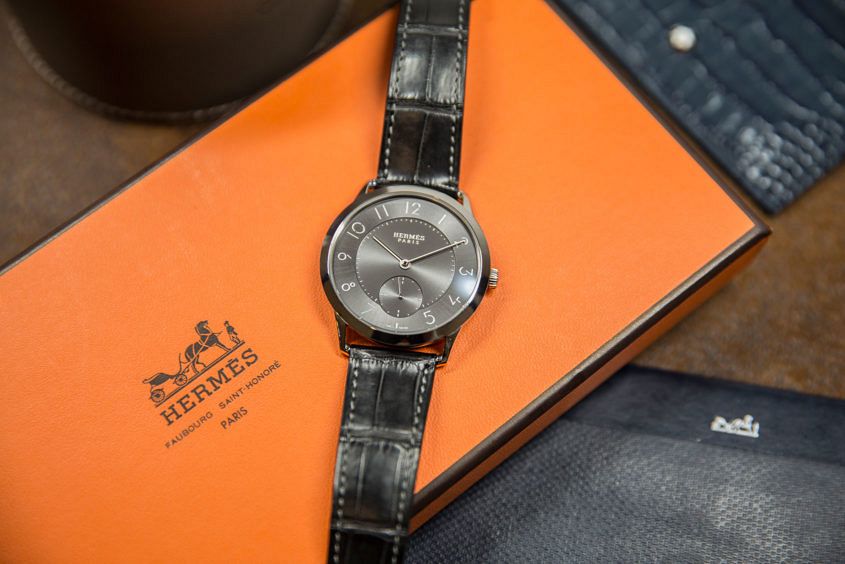 FS: True – that typeface is the real standout of this watch, and it goes to show what’s possible when you design a classical watch without the constraints associated with a few hundred years of Swiss tradition. That’s why, for me, big fashion houses like Hermès, Louis Vuitton and Chanel are a breath of fresh air in high-end watchmaking at the moment. But even if we took the typeface away, the dial holds up. The slender hands are the perfect length and razor sharp, and there’s a good mix of dial textures – concentric circles in the centre and subdial contrasting with radial sunburst in the outer dial section. 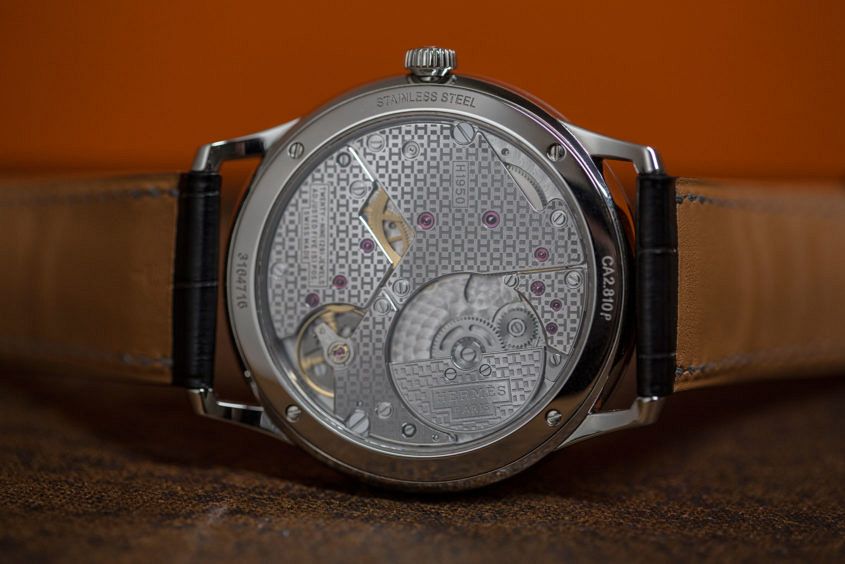 FS: Happily, to go with a dial and case this accomplished, the movement is just as impressive. The H1950 is the brand’s own calibre, developed by Fleurier-based Vaucher – a high-end movement maker that Hermès happens to own a 25% stake in (Parmigiani’s parent company owns the remainder). The micro-rotor powered H1950 is a far cry from the stock ETA movement you might expect a fashion house to use, coming in at an impressively svelte 2.6mm high. Power reserve is 42 hours, and it looks lovely, thanks to the hand-chamfered edges and decidedly non-traditional ‘H’ motif.

CD: I’ll defer to you when it comes to the mechanics, but it’s fair to say the movement looks good too, right? I love that when you flip the watch over, the art-deco vibe continues thanks to all the minuscule H’s etched across the components. Some people (watch purists, perhaps?) might find this too busy. I think it’s really striking. 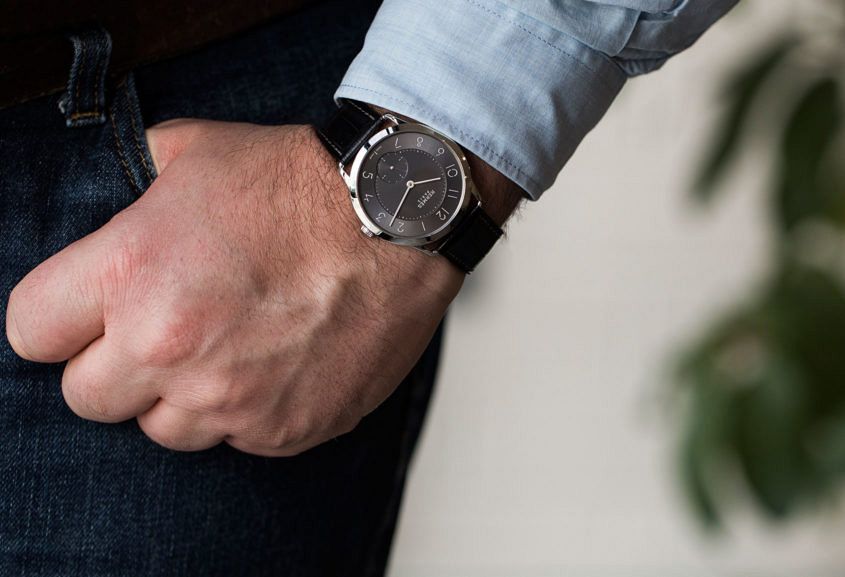 CD: With the brand’s roots in saddlery and equestrian goods (leather and buckles and straps, oh my) you’d expect perfection here. And that’s what you get, in soft, supple, matt graphite alligator lined with the traditional Hermès burnt orange. And there’s no new-fangled deployant. Just an elegant, stirrup-inspired buckle, with a curve that hugs the wrist.

FS: Sadly I’m not as familiar with Hermès leather goods as I’d like to be, but I’ve encountered a few watch straps in my time, and this is one of the nicest I’ve handled – certainly the best ‘stock’ alligator strap. You pay a premium for Hermès leather, but based on this I can see why. 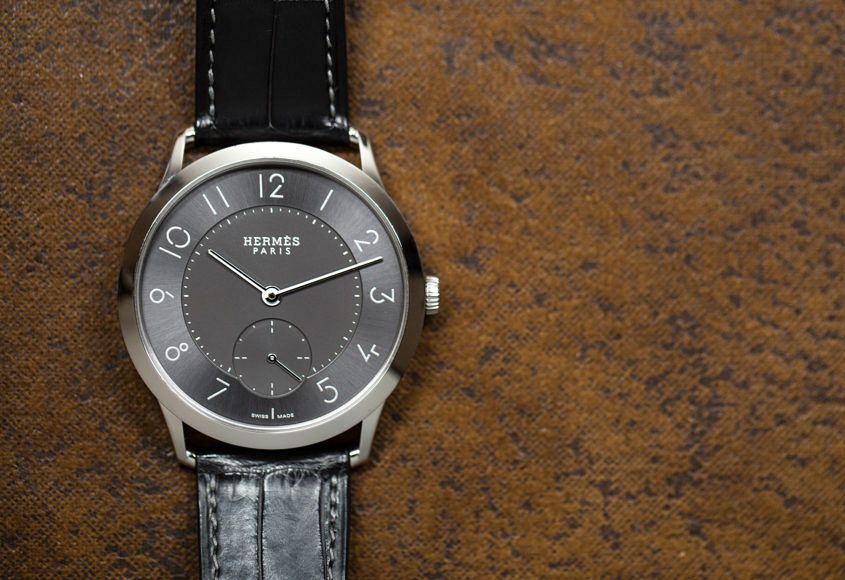 CD: This is a beautiful match for a well-tailored suit, whether for work or something more formal in the evening, but I’d say it would add a very polished finishing touch to a casual weekend outfit, too. And by the way, that means a fine-gauge polo shirt and chinos – not boardies and Crocs. Still, surprisingly versatile for a dress watch.

FS: Hermès has hit all the right notes here – the Slim has a distinct personality and style that clearly sets it apart from the mainstream of Swiss watchmaking, but has the quality and finishing to directly compete. All up it’s a compelling offering. If I was in the market for a slim dress watch at this price point, I’d consider it.

See this font? It was designed just for Hermès….

Someone looking for an ultra-slim watch with a little extra personality – or the person who just loves all things Hermès.

In certain lights and angles, legibility is an issue with the grey on grey dial. But if that’s a deal-breaker for you, there’s always the blue and opaline silver options.