Wardrobes need to be refreshed with the changing of seasons, houses occasionally need a lick of paint, and watch collections need to be revitalised every now and then to avoid getting stale. That revitalisation is exactly what we’re getting this year with the new TAG Heuer Aquaracer Professional 300 collection, which has been modernised with a number of key changes, some bold and some more subtle. 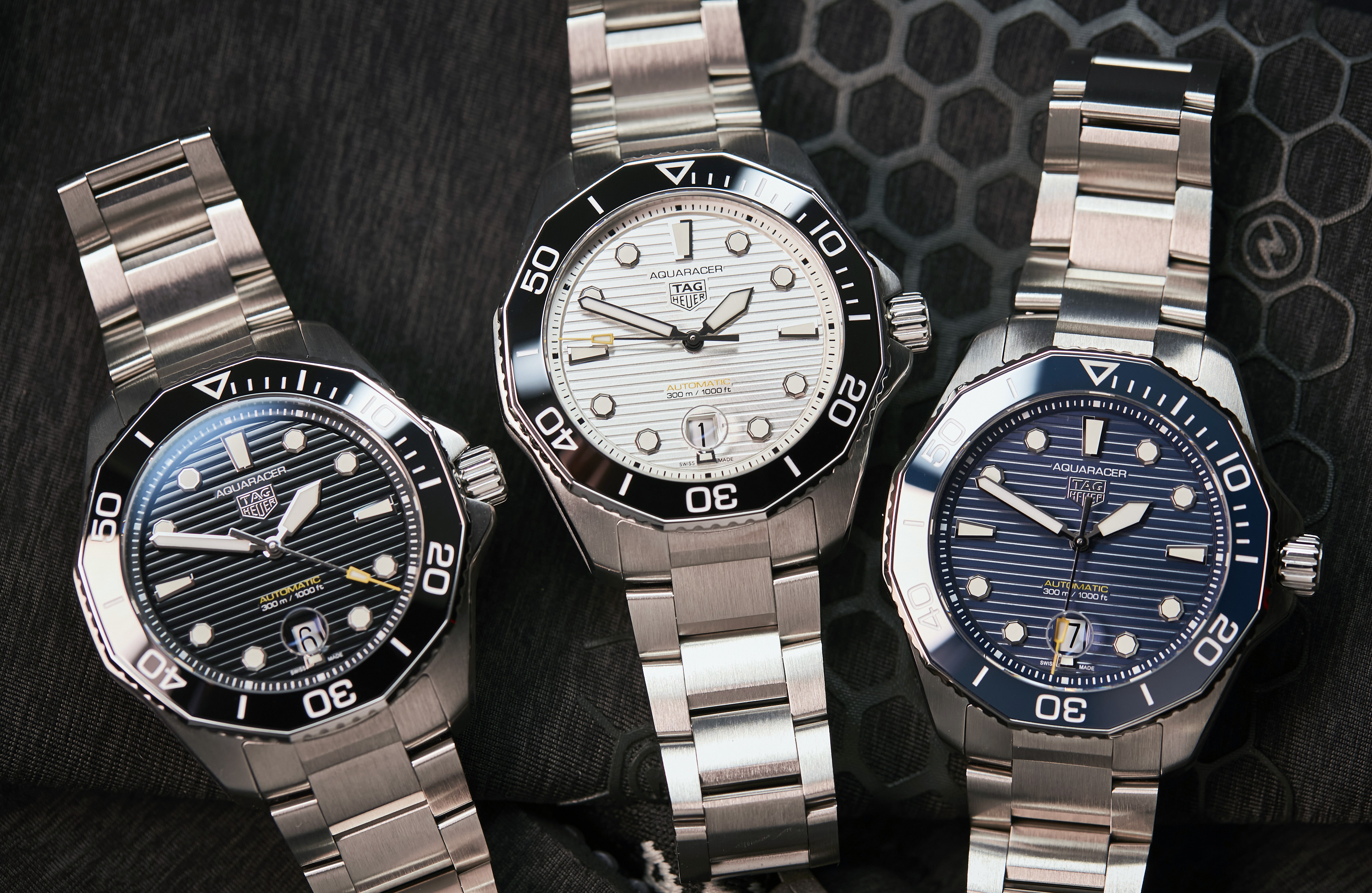 While the overall look and feel of the watch remains relatively consistent with the previous collection, the devil is really in the details that you can’t see from across the room. With updates to the dial, case, bracelet and more, there’s a lot to consider in this TAG Heuer Aquaracer Professional 300 collection, especially when it comes to the more specific features of this latest generation dive watch. 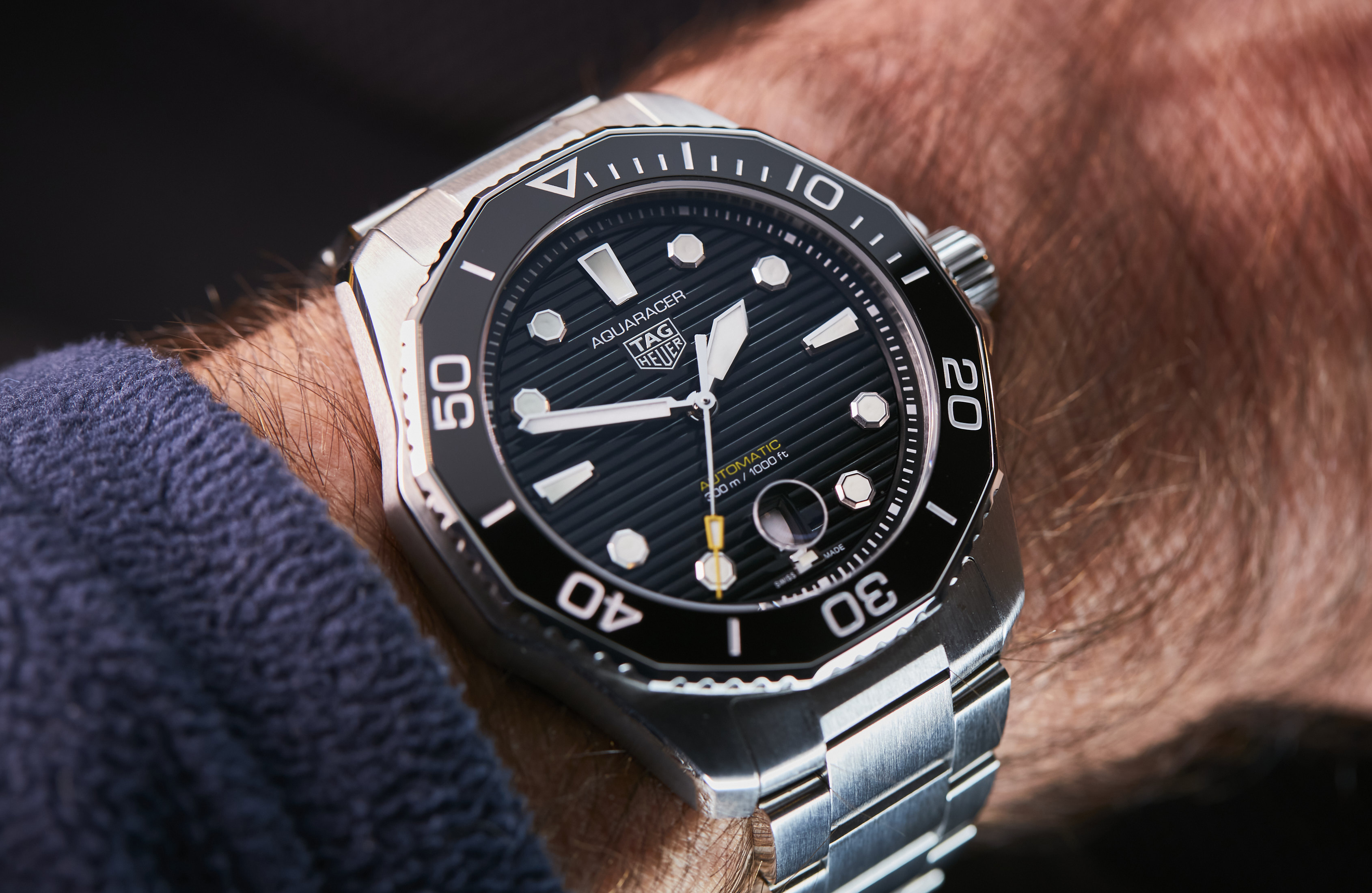 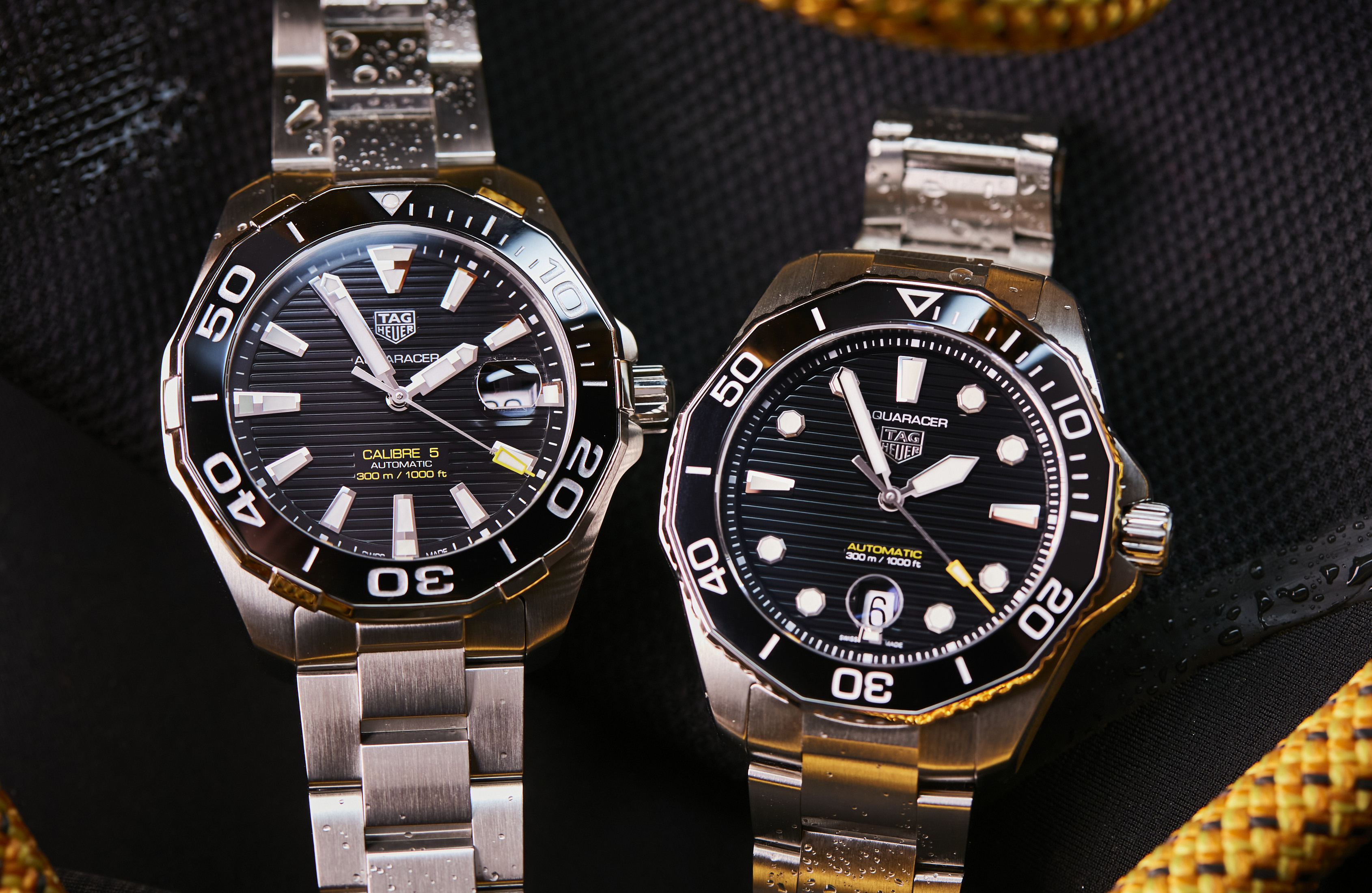 The older generation Tag Heuer Aquaracer on the left, next to the new 2021 version on the right.

Three of the new references within the TAG Heuer Aquaracer Professional 300 collection feature the same 43mm stainless-steel case – the other is hewn from sand-blasted titanium. All of them share a slightly updated design that feels much more contemporary. It is the fifth generation of Aquaracer this year and the cases are slightly thinner than the fourth generation at just 12.4mm down from 13mm. 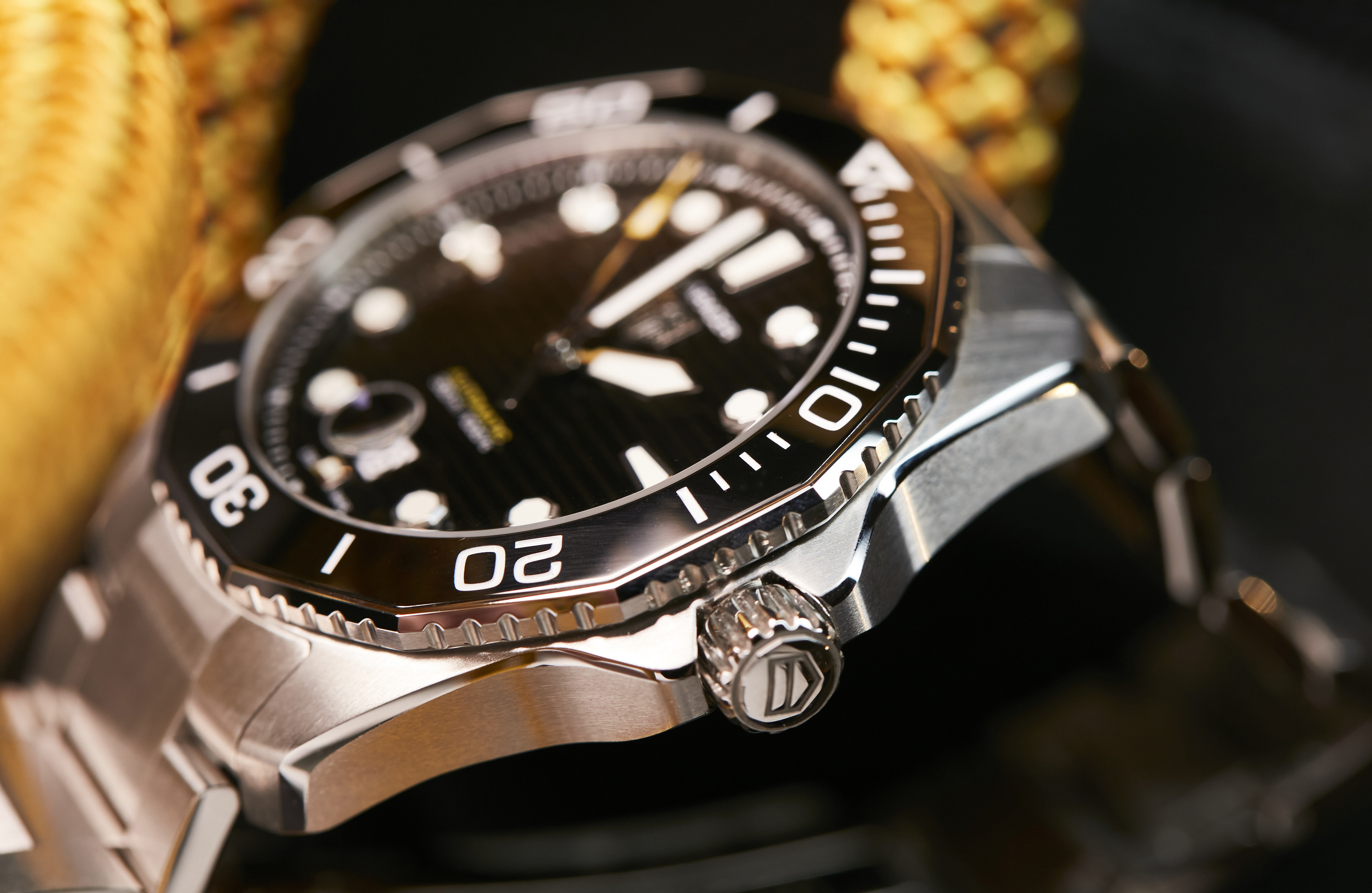 The lugs are also slightly shorter, making it wear smaller on the wrist despite having the same diameter as the previous generation. The lugs feature brushed finishes to their surfaces, with the exception of a polished angled facet that emphasises the flanks and tops of the lugs. 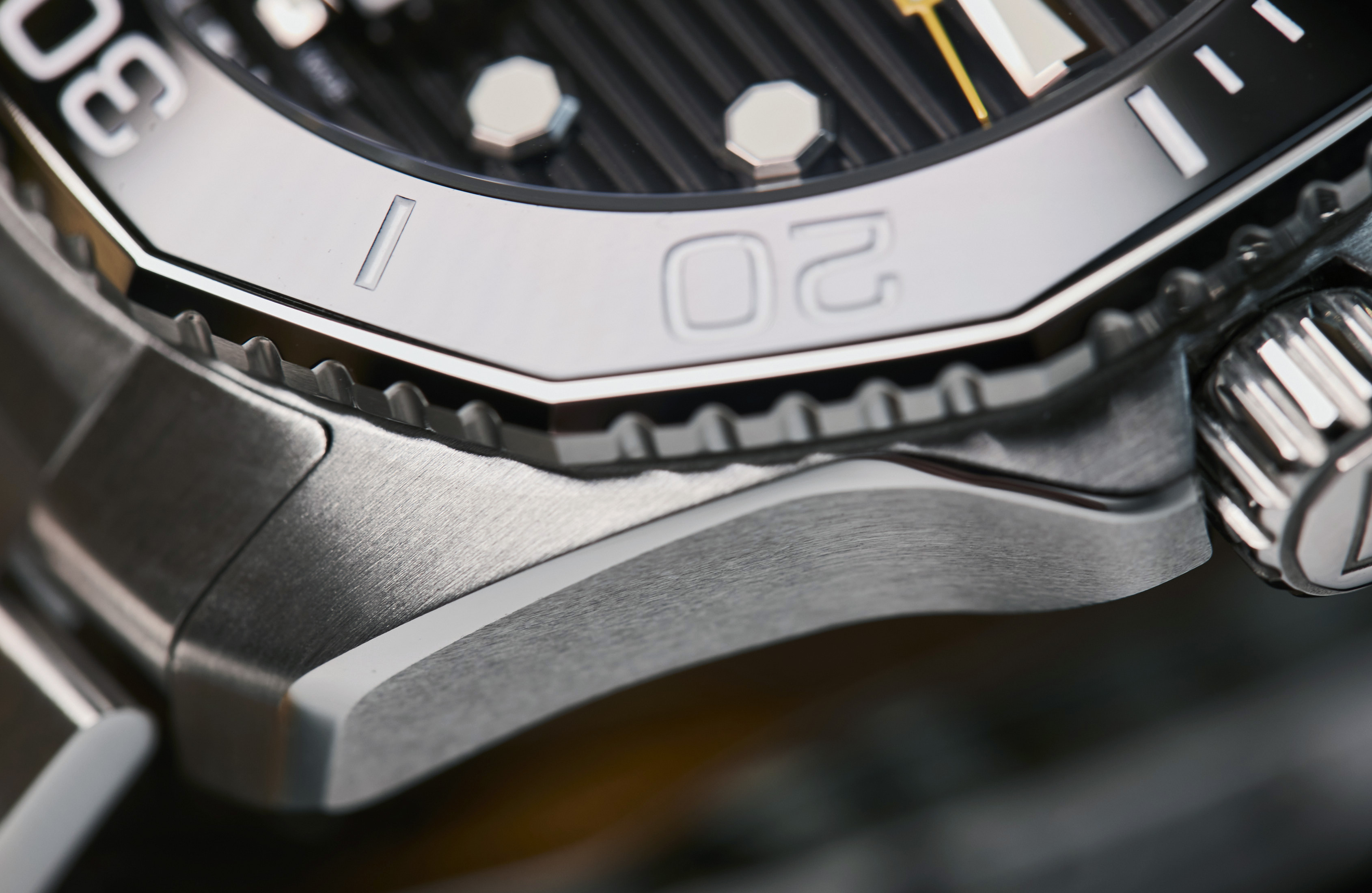 The crown guards are slightly more prominent, which actually serves to soften the visual impact of the crown, while the ceramic bezel has been redesigned to feature smaller, but more frequent knurls around its circumference for ease of gripping. 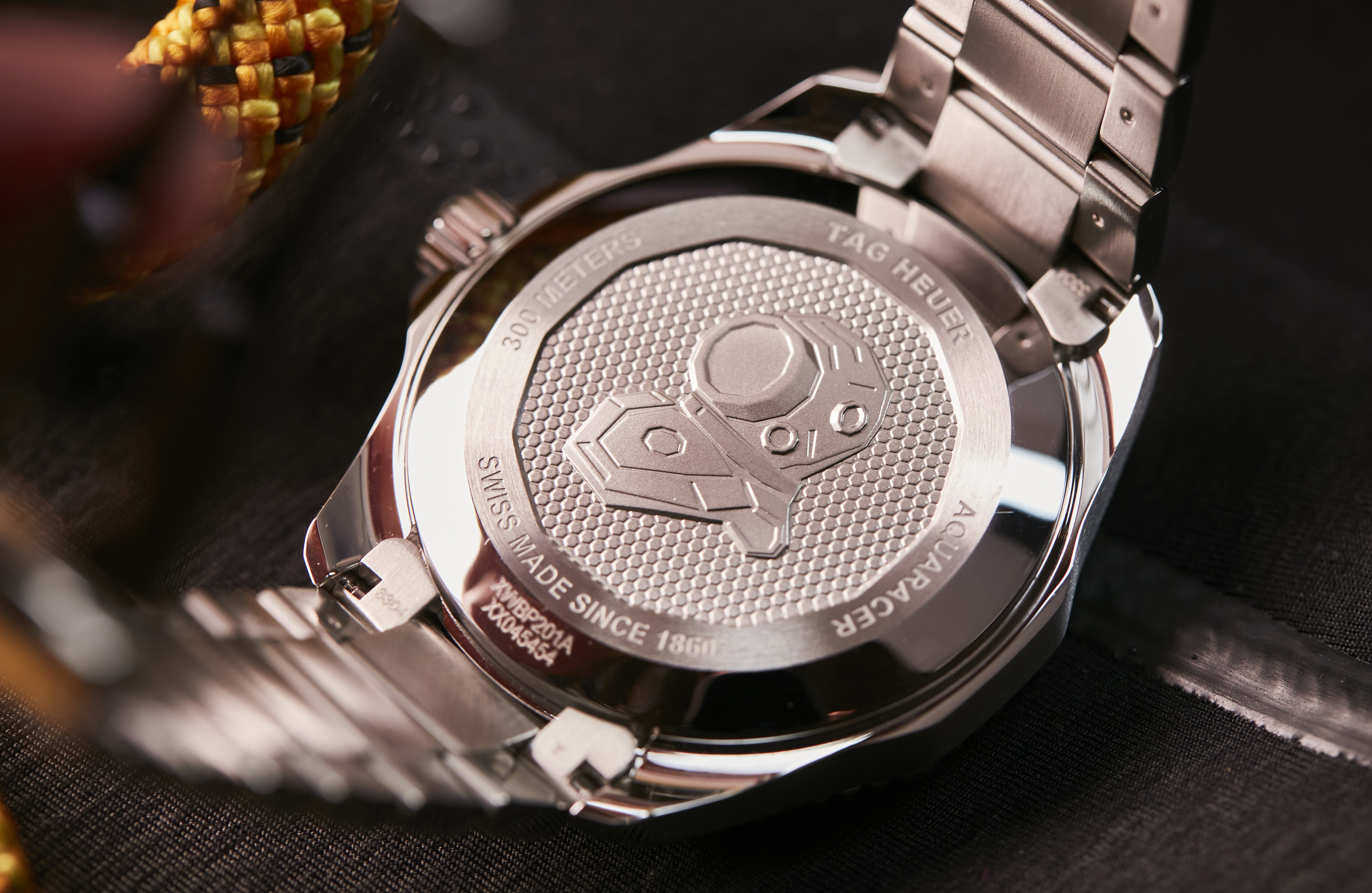 Both the caseback and crown screw down, guaranteeing the TAG Heuer Aquaracer Professional 300 collection to 300m of water resistance, with a charming historical diver depicted on the caseback. 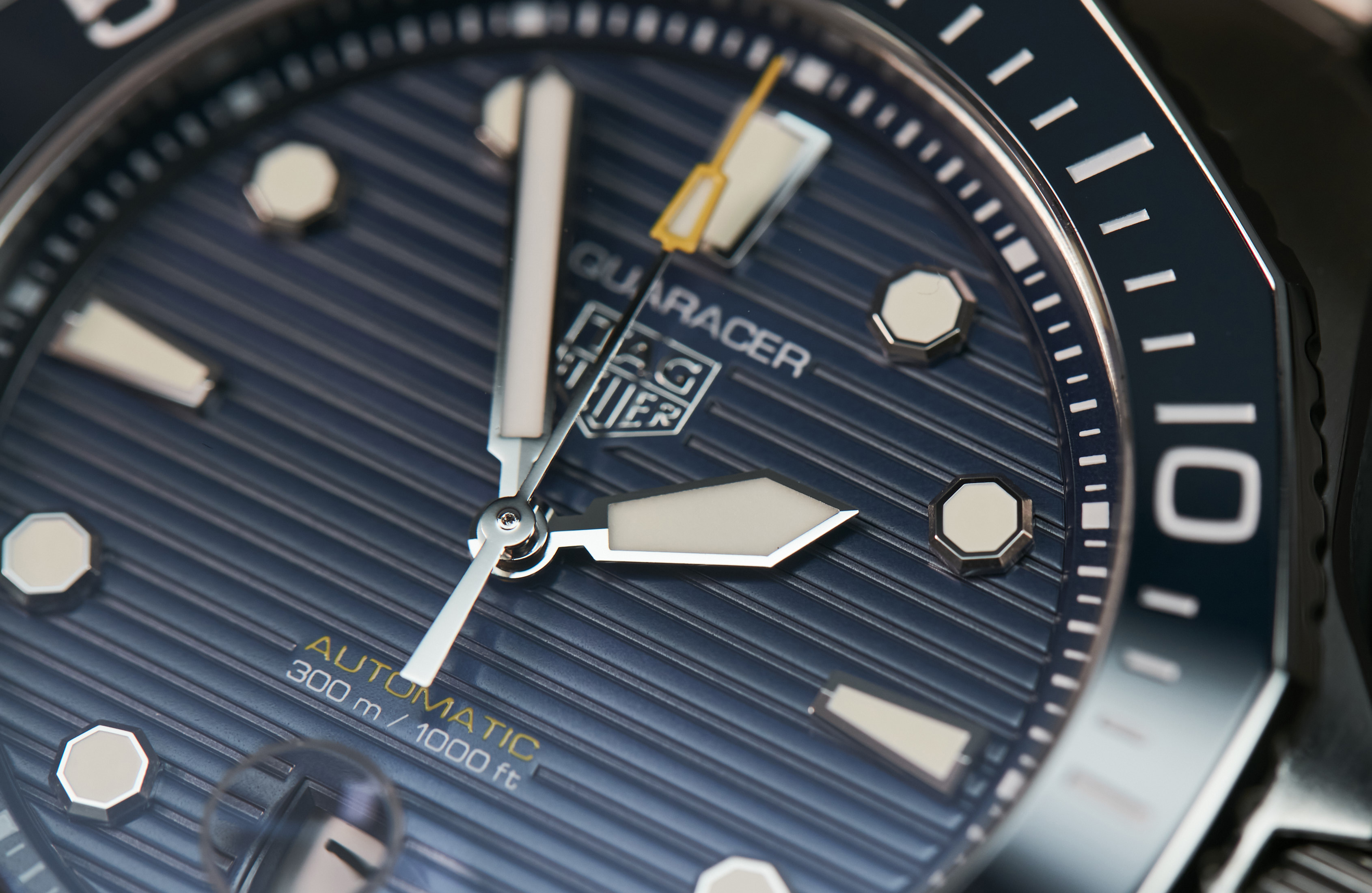 There are four different dial options in the new TAG Heuer Aquaracer collection: black, blue, white and green. Each of them feature matching ceramic bezels that frame them nicely, but are otherwise the same. 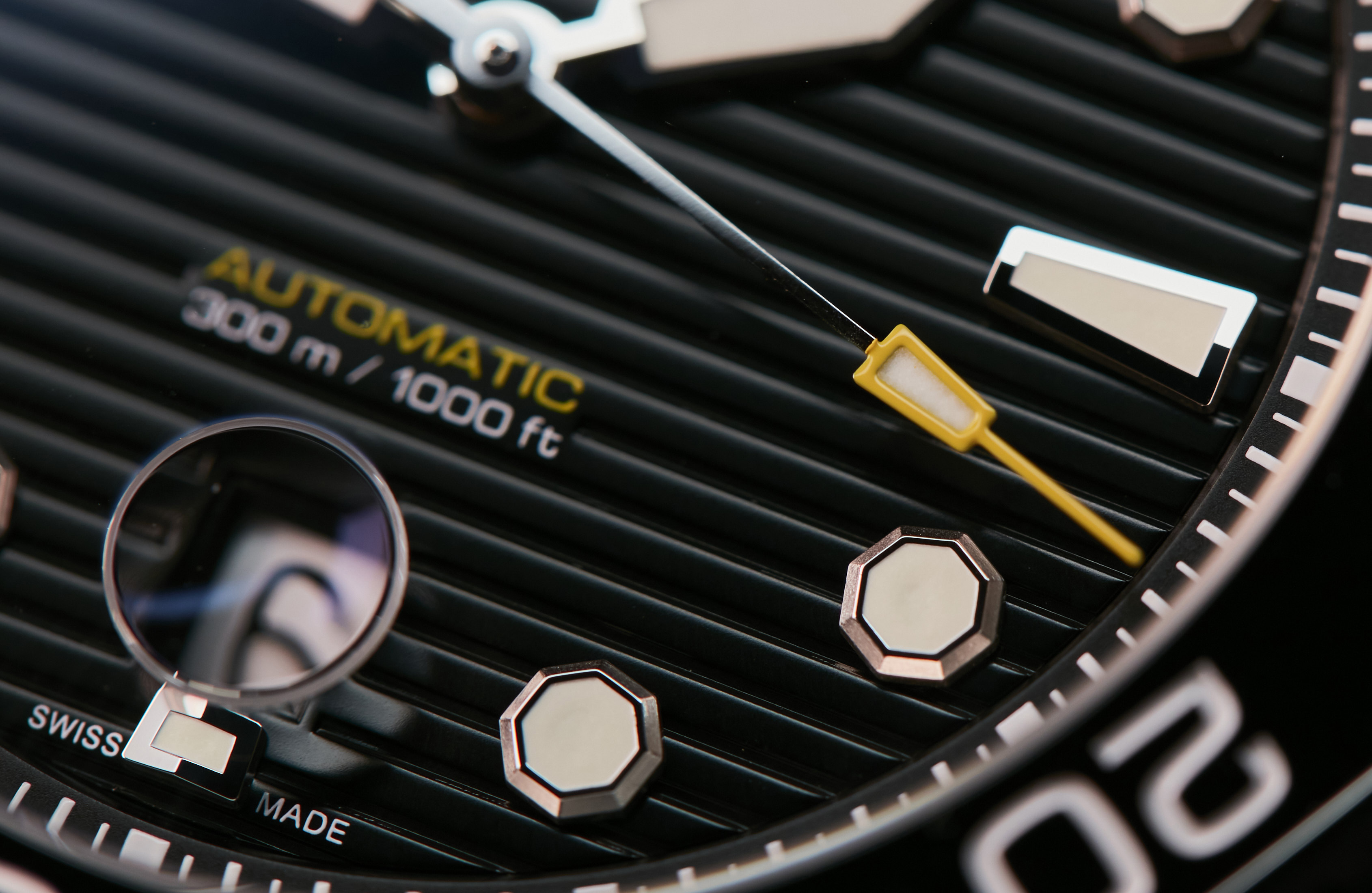 The dials feature the horizontally striped Aquaracer pattern across them, interrupted only by the logo at 12 o’clock and the hour markers. The hour markers have been updated from the previous generation that featured elongated trapezoidal markers, while the latest generation keeps them for the markers at the cardinal points, while the rest are octagonal in shape. 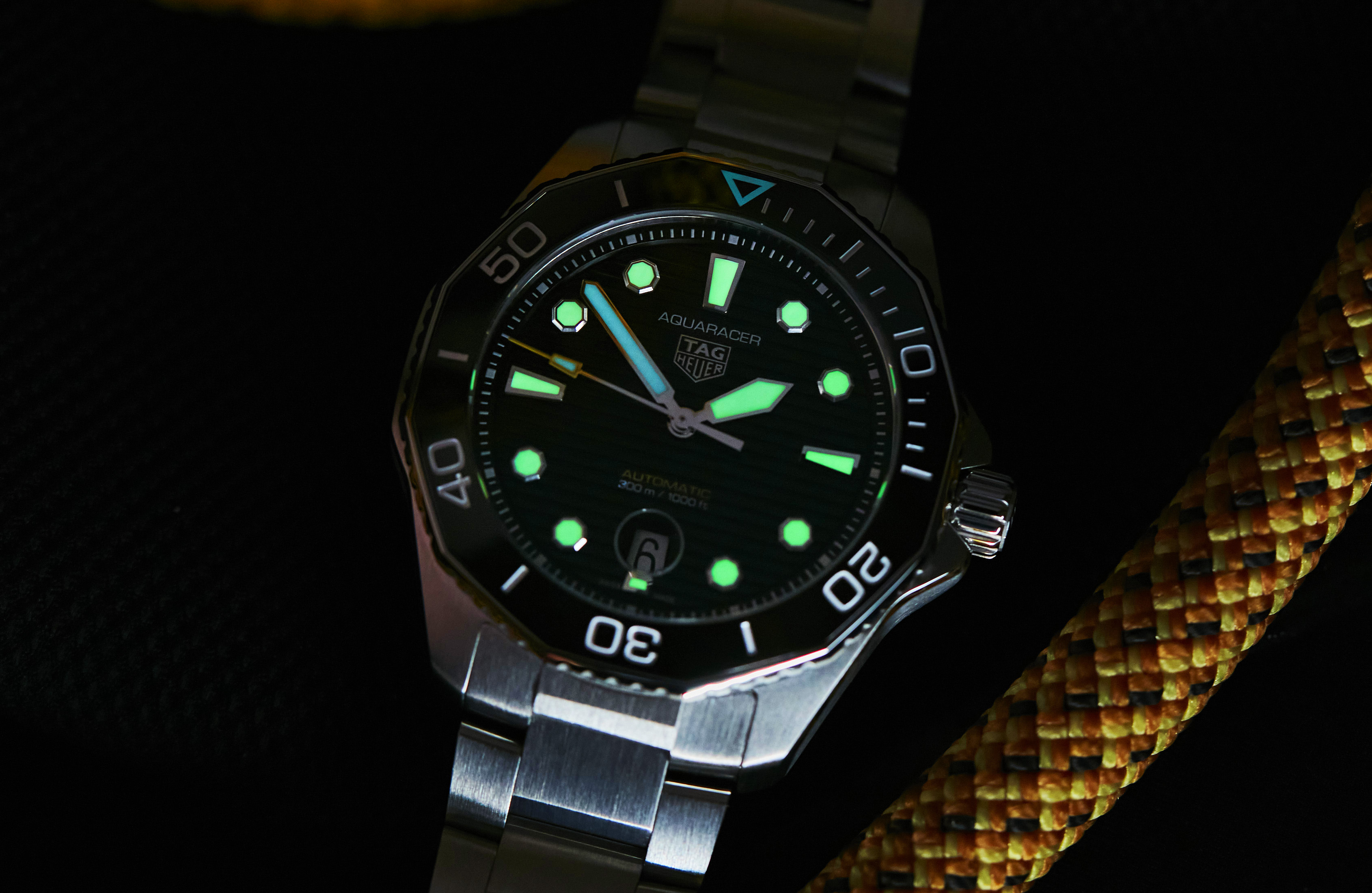 All of the hour markers and the classical sword shaped hour hand are filled with generous helpings of green Super-LumiNova, while the bezel marker, minute hand and seconds hand feature contrasting blue Super-LumiNova. Legibility is clearly a high priority for TAG Heuer in this collection and they have achieved that goal very well. 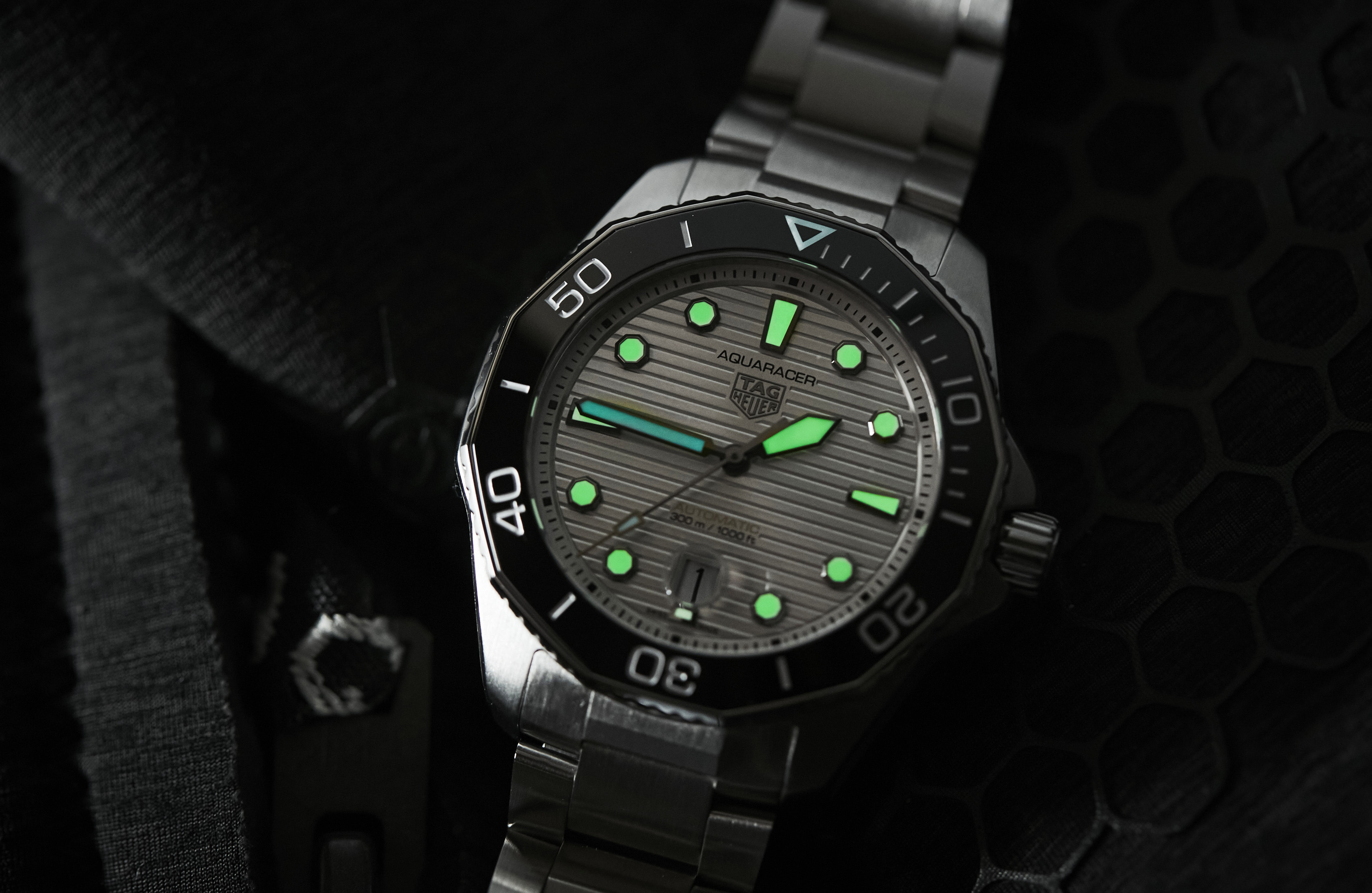 The final and most appealing dial update (at least where visual symmetry is concerned) is the new placement of the date window and cyclops lens at 6 o’clock. 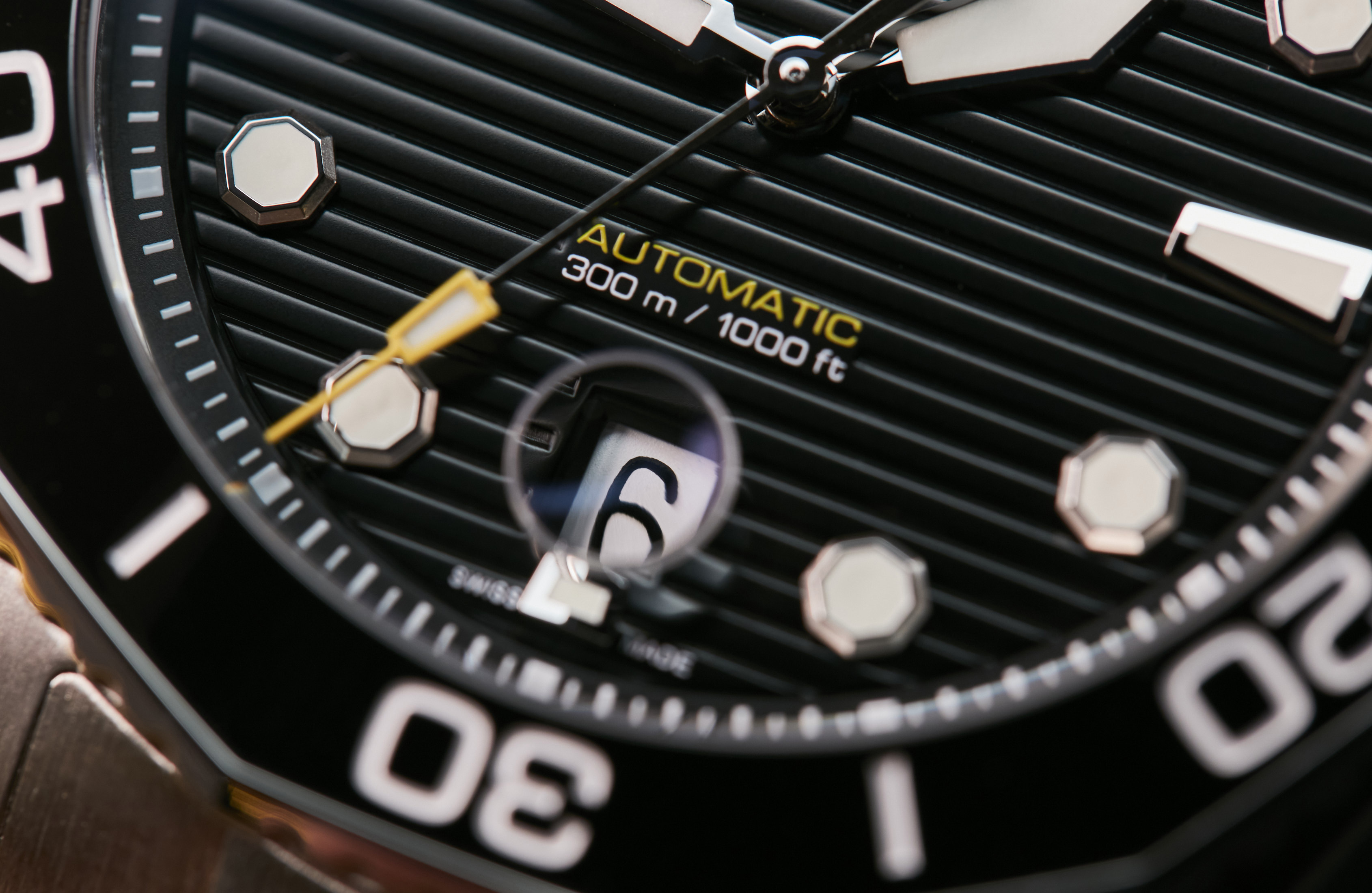 This is something we’ve seen a lot on the dials of modern TAG Heuer chronographs, a design decision that works well, so it’s good to see the Aquaracer collection getting the same treatment. 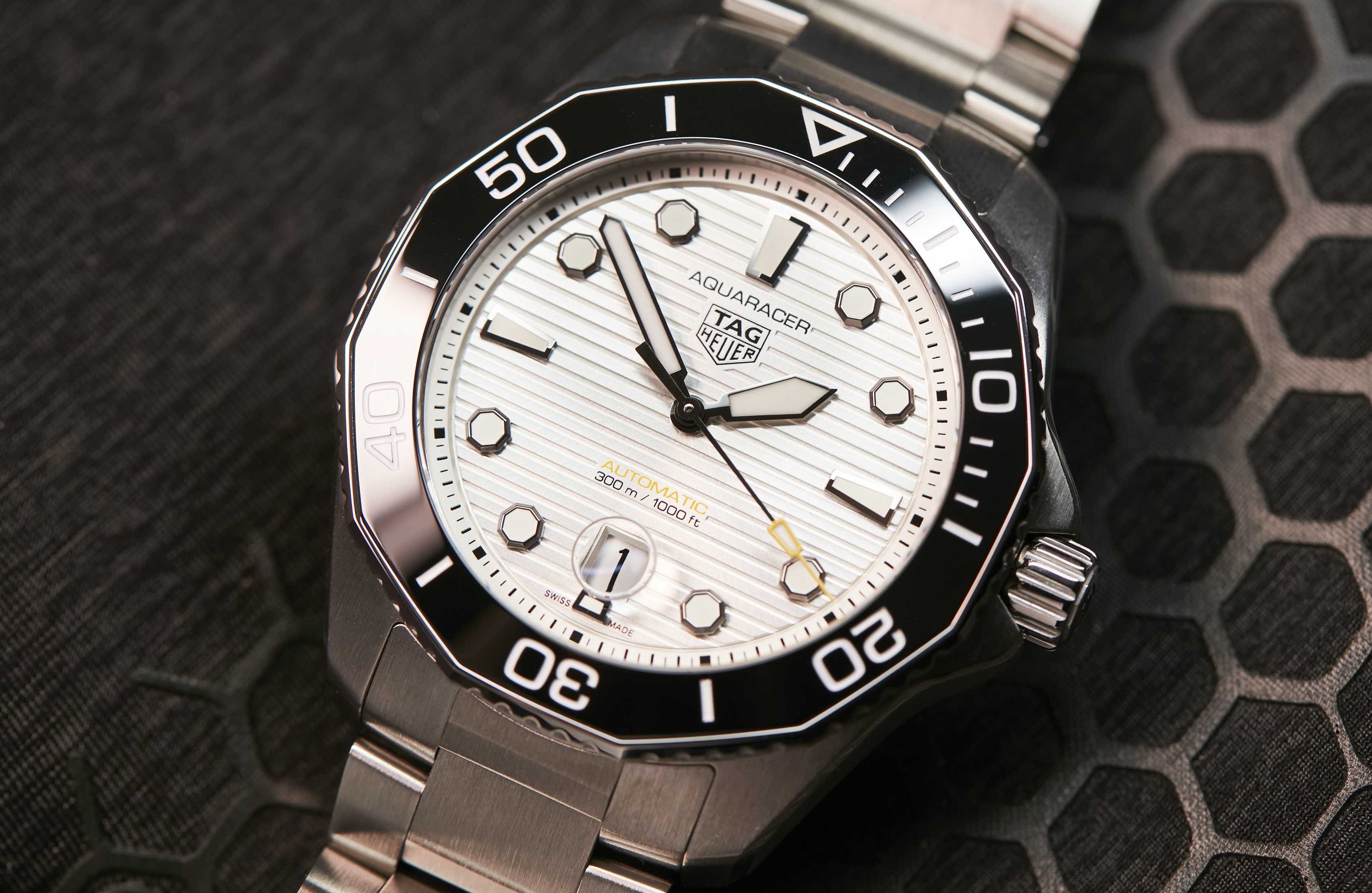 Housed within the new TAG Heuer Aquaracer Professional 300 collection is the tried and true in-house Caliber 5 Automatic movement. This is a long-time TAG Heuer workhorse movement, beating at 28’800 and offering a power reserve of 38 hours. While this is a little behind most modern automatic movements, it’s more than enough if you wear the watch on most days. 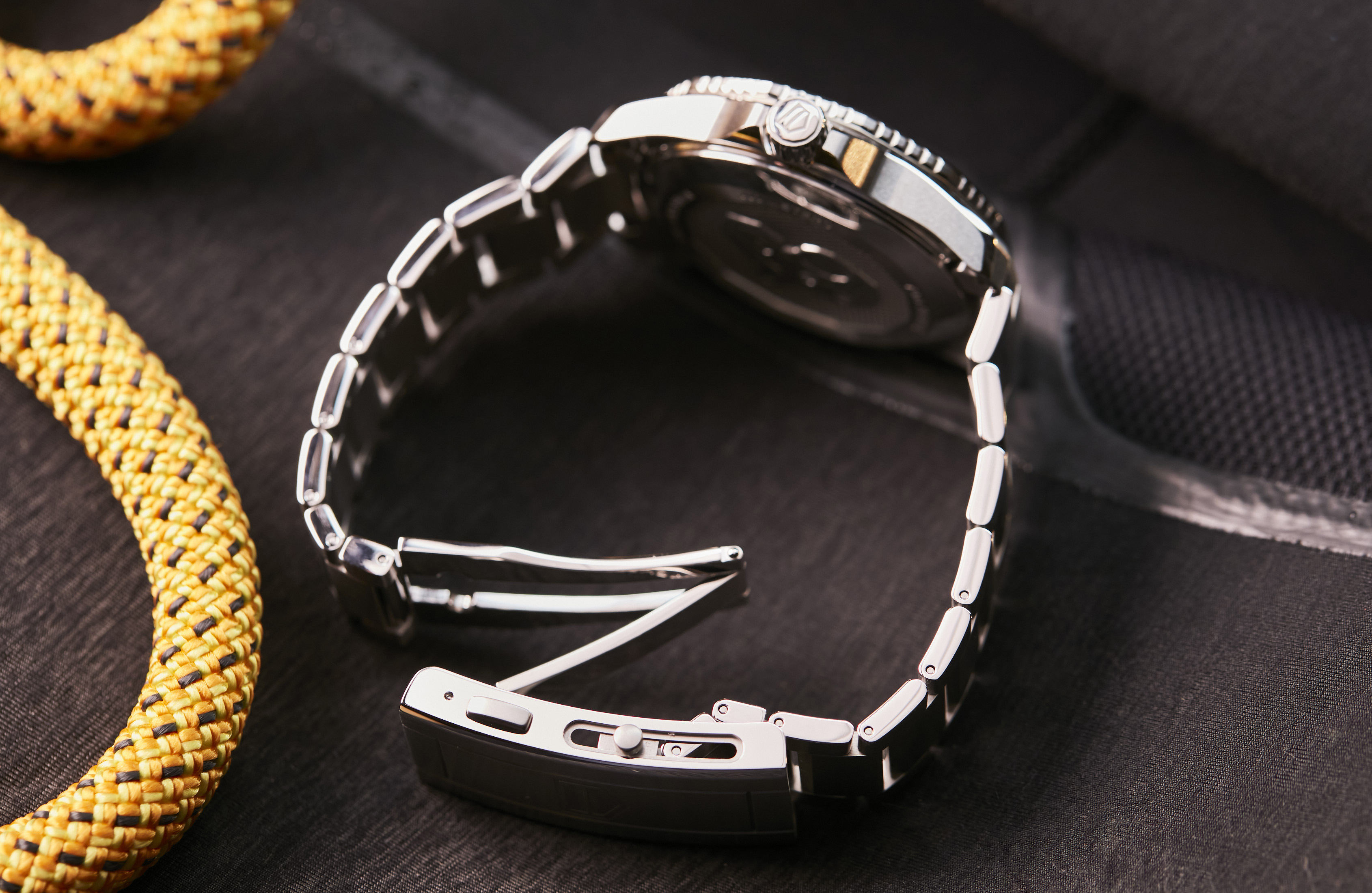 The bracelet is undoubtedly one of the best improvements that we get in the TAG Heuer Aquaracer Professional 300 collection. Not only is each link thinner, which significantly reduces the overall weight of the watch, but it also has a very nifty micro-adjustment system that can expand or contract up to 15mm. 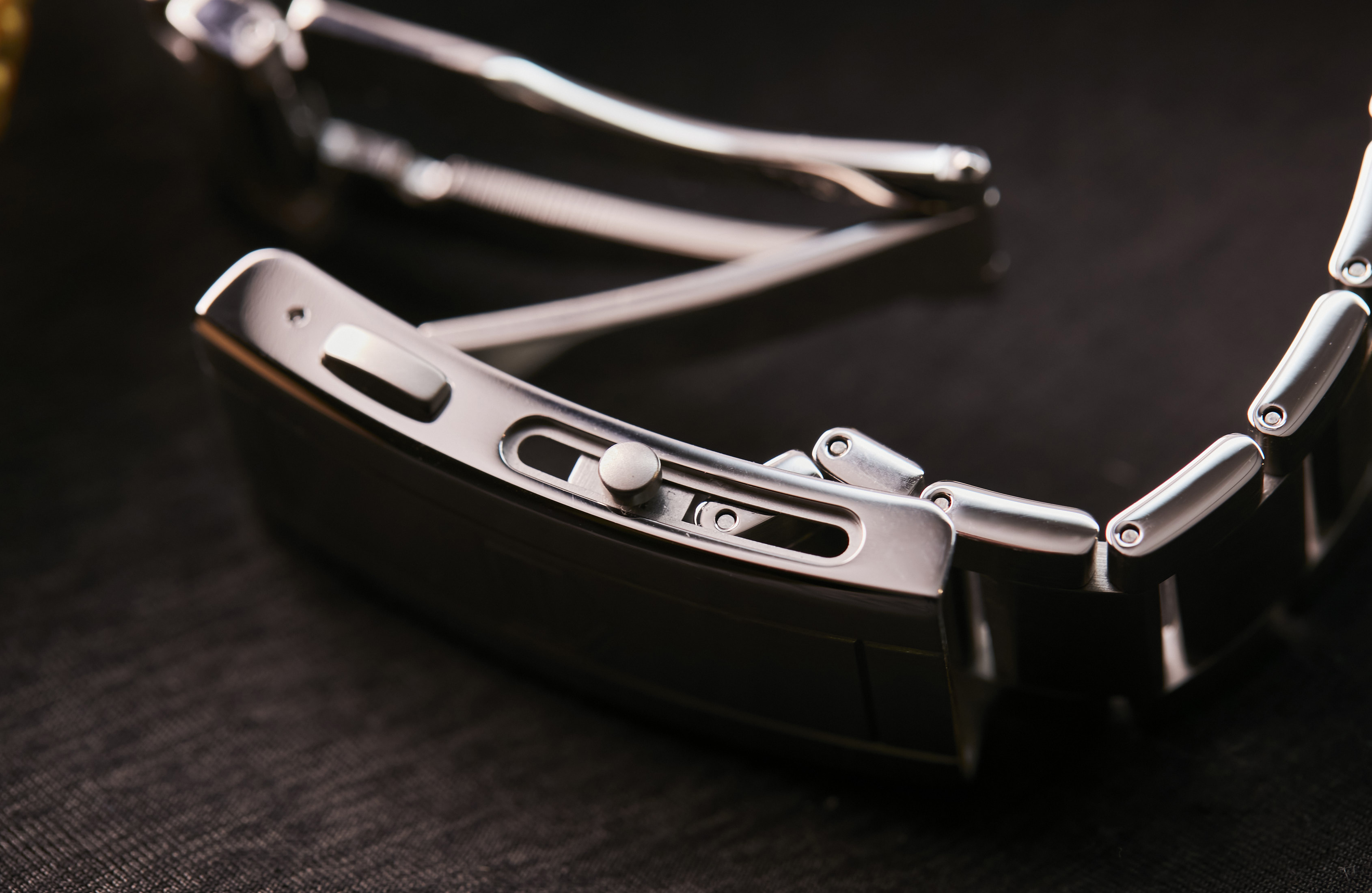 Of the four buttons that you’ll find on the clasp, two can be pressed to open the clasp when you’re putting on or taking off the watch, while the other two release the micro-adjustment system in either direction. The bracelet also tapers from the lugs to the clasp, reducing the weight, but also just making the watch feel more refined and considered when it’s on your wrist. 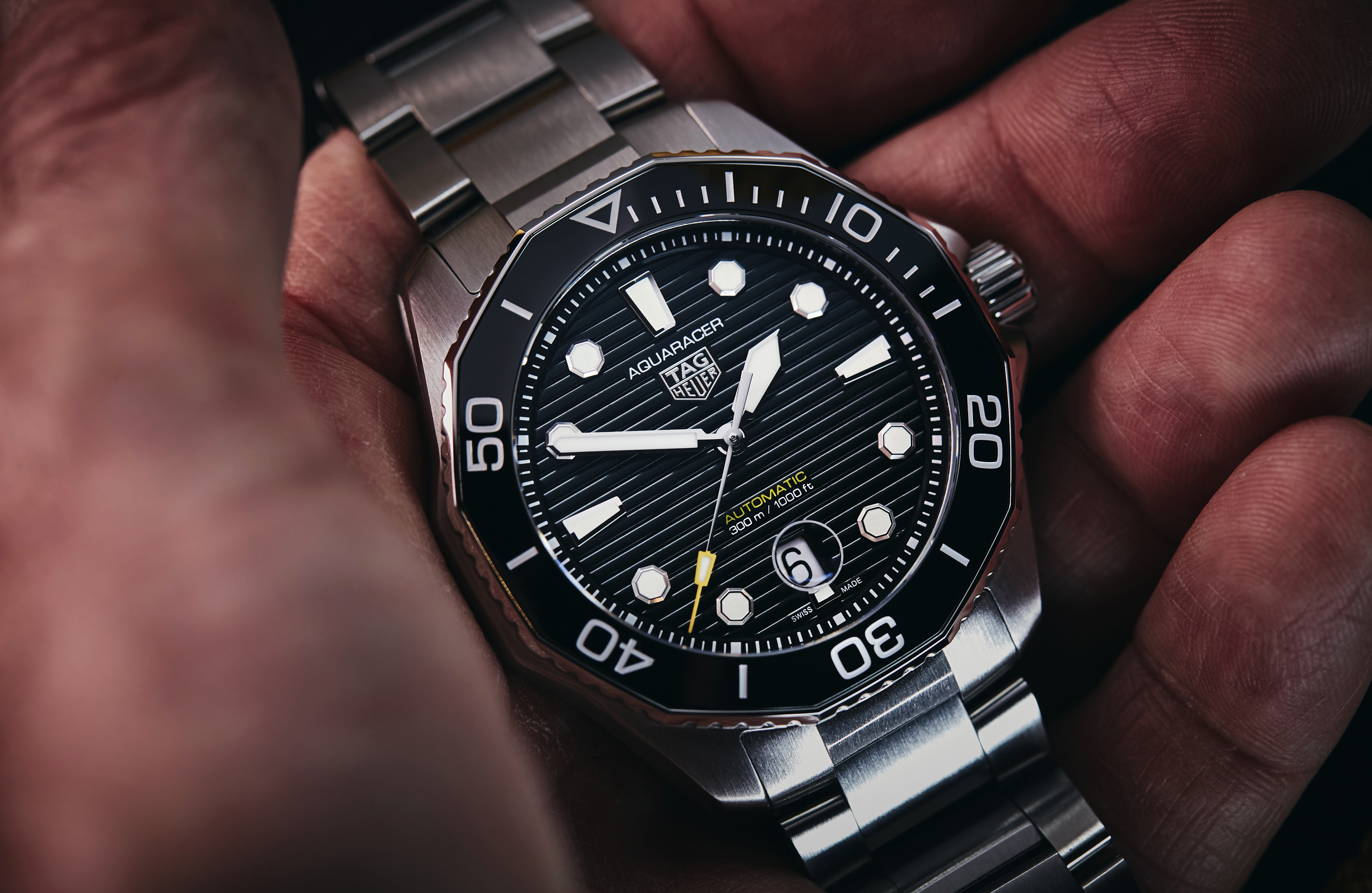 Sure, this isn’t an entirely new concept that TAG Heuer are offering here, but it isn’t meant to be. It is a refinement on a successful classic. A contemporary evolution of the La Chaux-de-Fonds based watchmakers robust and reliable dive watch. All of the changes are ones that are meaningful, from the added balance that the 6 o’clock date window provides, to the improved comfort of the bracelet thanks to the new ergonomic clasp. 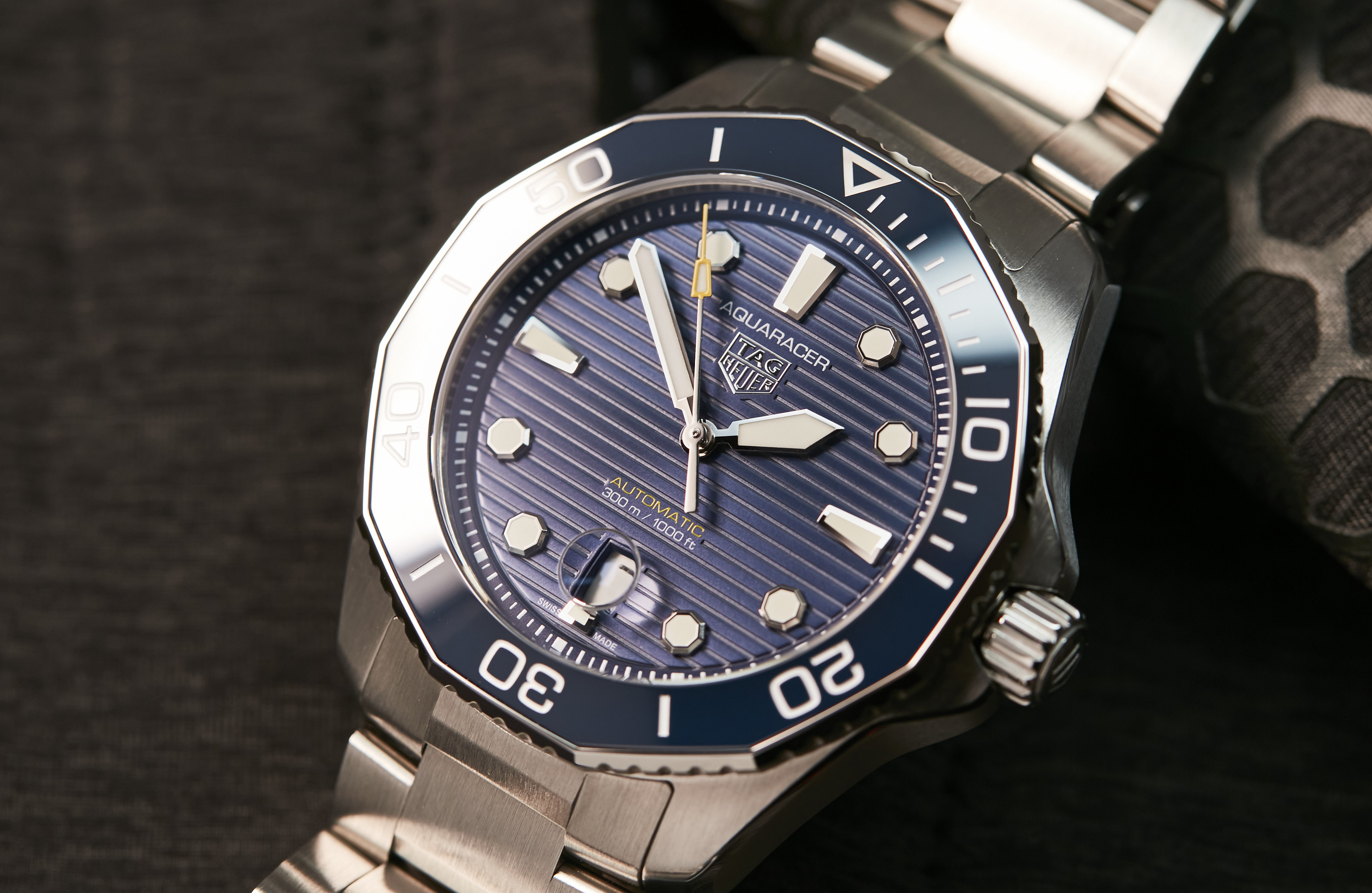 If TAG Heuer were looking to change anything further, it would be the movement within, but beyond that the new Aquaracer Professional 300 collection is the complete package. A watch you could wear everyday and never lust for another. So if you’re in the market for an everyday companion, or simply a beach watch for your summer holidays, this is a new range that should be on your radar. 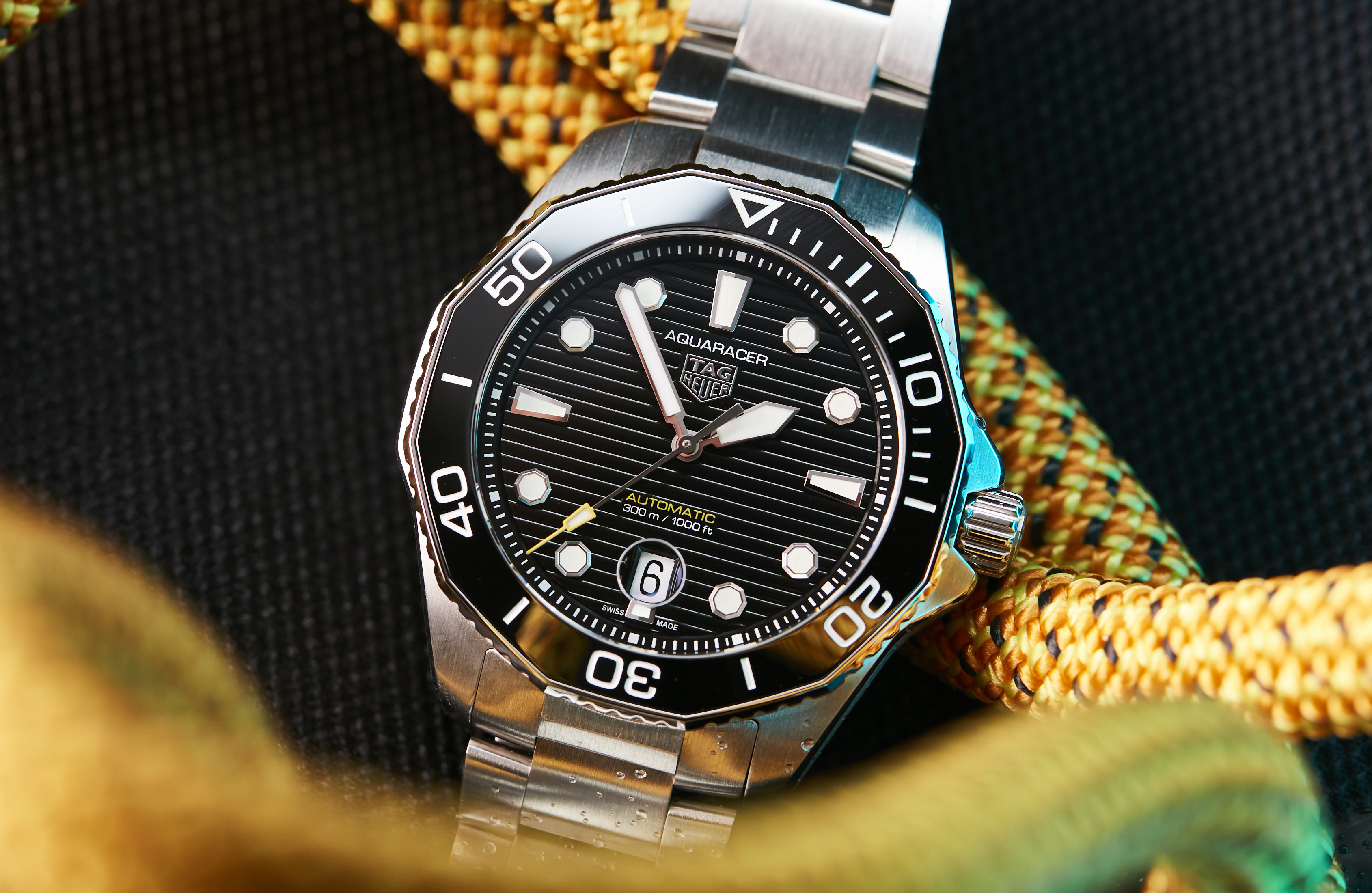