This version of Montblanc’s distinctive Nicolas Rieussec collection has a nighttime party trick that’s worth staying up for. 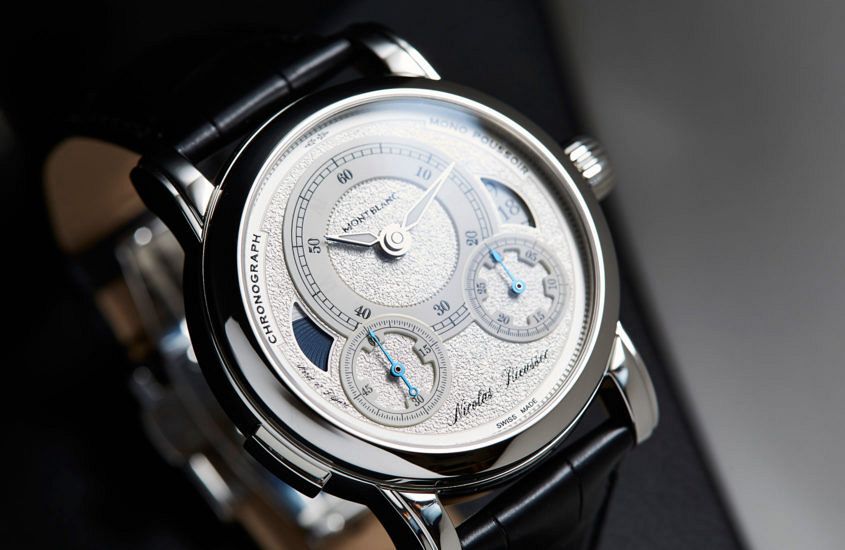 A nineteenth-century French watchmaker credited with inventing the chronograph, Nicolas Rieussec was an important man in the history of horology. For this reason, Montblanc decided to honour him with a series of – you guessed it – chronographs, inspired by his 1825 design. And you don’t need to have any great understanding of classical French watchmaking to appreciate the ample charms of this limited-edition piece.

The first Montblanc Rieussec emerged in 2010, and every subsequent model has followed the same essential formula, with dials and case materials receiving tweaks along the way. So, while the Homage to Nicolas Rieussec II isn’t a new piece (it was released in 2014), it’s worth a closer look. 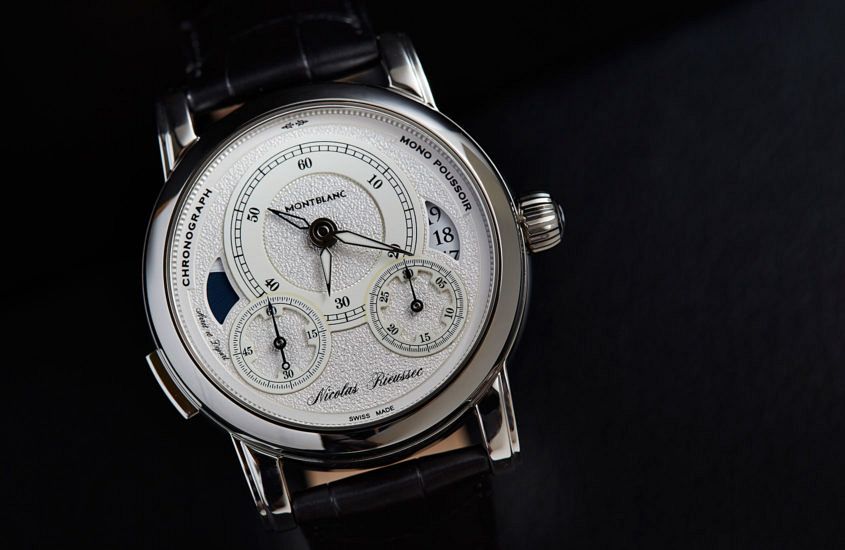 There’s a lot happening on the Rieussec II’s dial, in the best possible way, demanding attention and rewarding the eye. Every time you look there’s a new, equally fine detail to admire. First up, the base of the dial is silver, with a grained, eggshell finish. Upon this rest three subdials, the largest telling the time, while the smaller two are chronograph minutes and seconds counters respectively. These white ceramic subdials sit above the dial, creating depth through shadow. Look again and you’ll notice two cutouts at each side of the dial. On the left is a day/night indicator (there’s an independently adjustable second time zone on the main dial), and on the right is the date. The uneven display of the date numerals detracts from an otherwise very balanced layout, so perhaps the watch would be better off without these large cutouts. The other design quirk I could do without is the clash of lumed sword-style hands for the time, and blued spade hands on the chronograph counters. 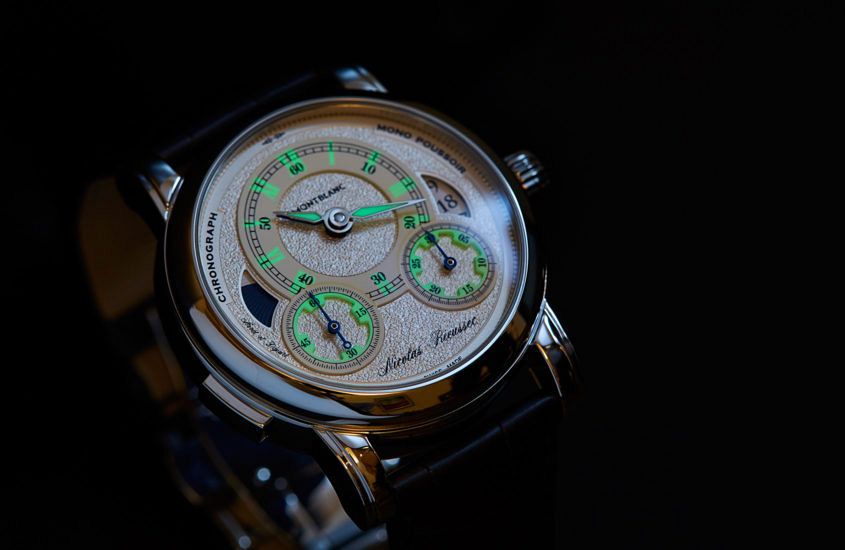 Beyond all this, there’s another obvious omission – the hours – but this is where the Rieussec II reveals its party trick. The hour numerals are there – you just can’t see them in daylight. A luminous compound has, somewhat ingeniously, been mixed into the ceramic with enough precision that, upon turning out the lights, Roman numerals light up the dial. It’s a small, but very cool detail and a process unique to Montblanc. 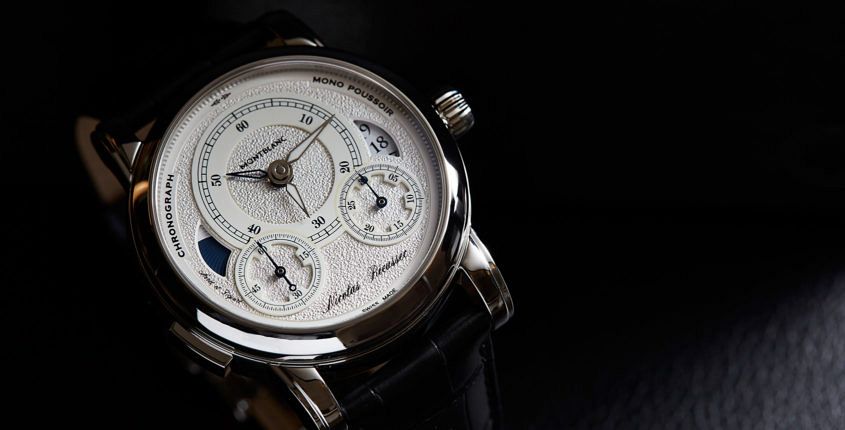 With everything happening on this dial – the textures, hands, numerals, and typefaces, as well as the apertures and unusual chronograph layout – it should be a visual mess. But somehow Montblanc pulls it off this difficult design, creating a beautiful and intriguing dial that works. 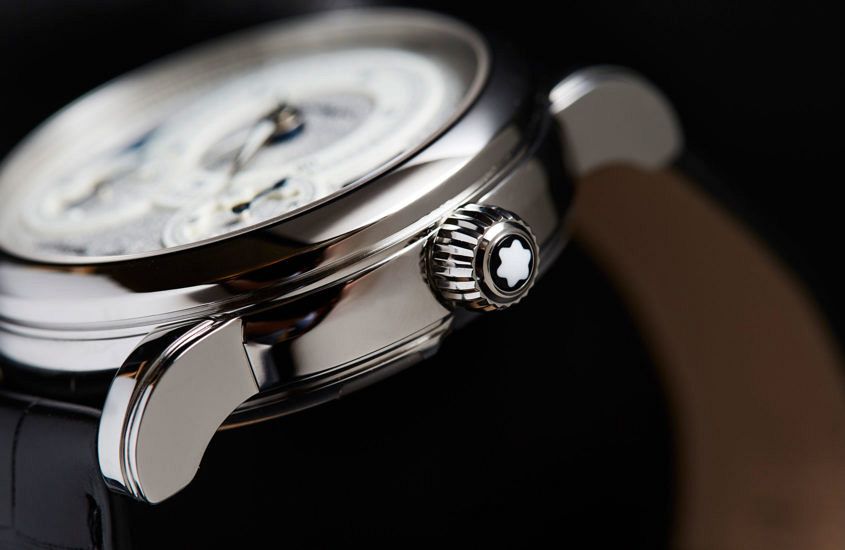 The Rieussec II is a sizeable beast. At 43mm across and 14mm high, it’s at the larger end of the scale for a highly polished chronograph. This size combined with the distinctive dial means you can be sure this watch will make a statement. And anyway – the height of the watch is justified, given that there’s an automatic chronograph movement ticking away in there. 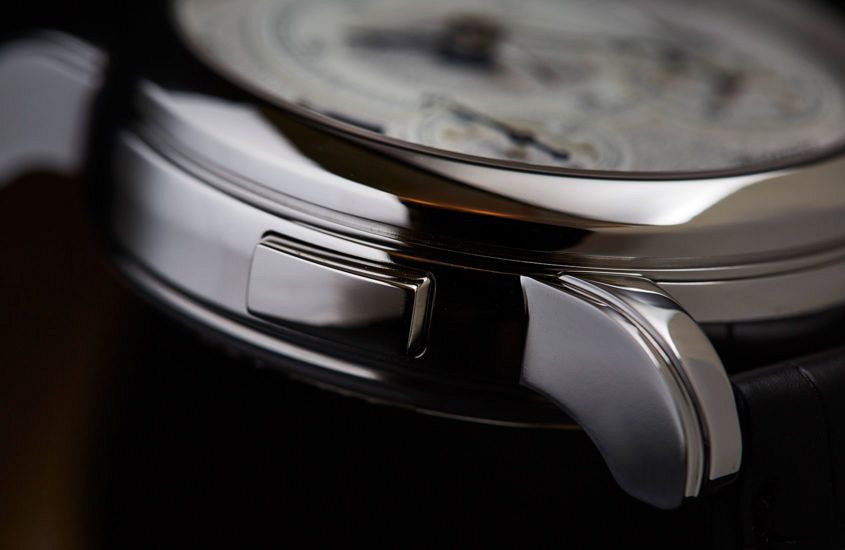 Finishing is top-notch, with plenty of mirror-polished, curvaceous surfaces to keep you interested. Nor have any of the details been scrimped, the vaguely onion-shaped crown tapered for comfort, and inset with the Montblanc star. The single chronograph pusher is simple, but satisfying to use. 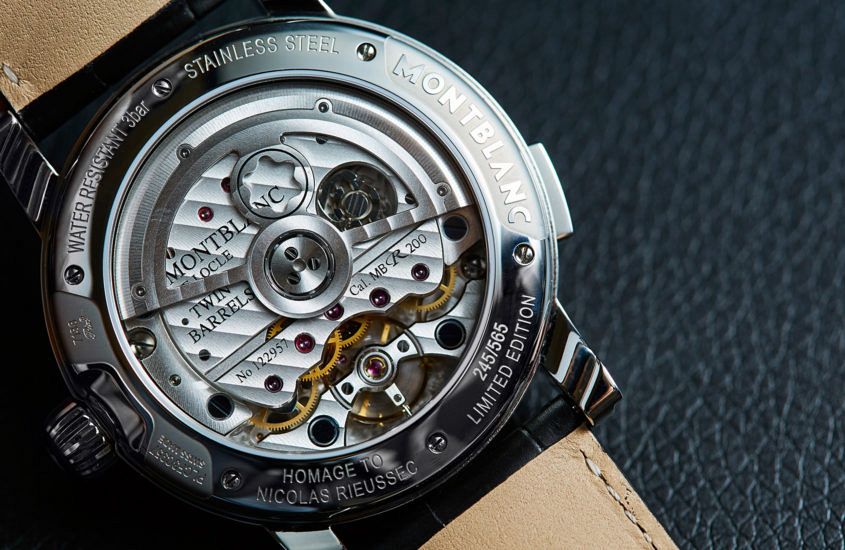 A column wheel chronograph with a vertical clutch, the calibre MB R200 that powers the watch is a movement with interesting architecture thanks to the layout of the subdials. Developed specifically for the Riuessec collection, and is made entirely in-house, the The MB R200 is a movement Montblanc has used to great effect, versions of it showing up in the Heritage Chronometrie Exotourbillon Minute Chronograph, as well as the new TimeWalker Exotourbillon Minute Chronograph – though of course these watches throw in a tourbillon for good measure. 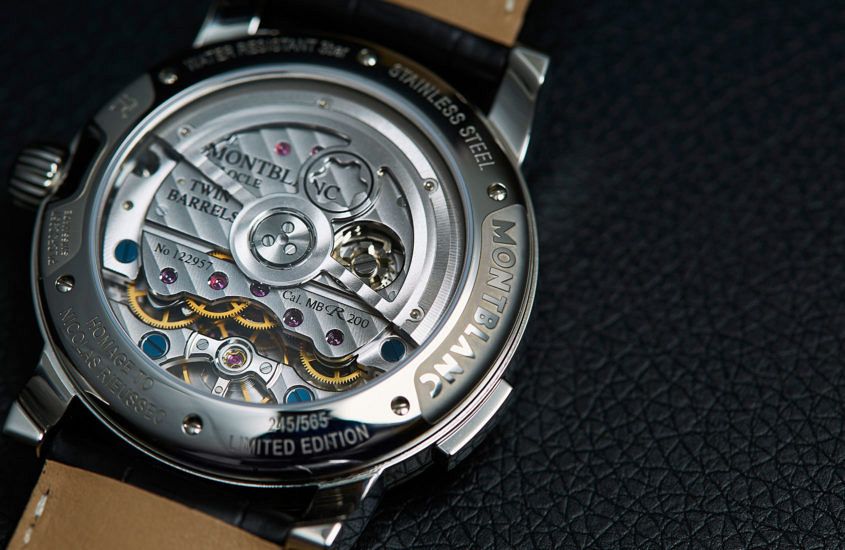 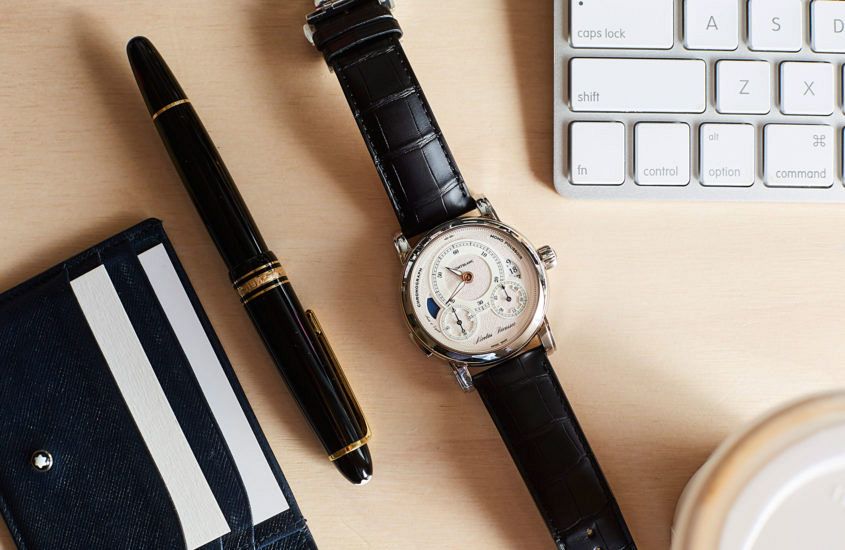 The slightly cushioned black alligator strap is a safe option, but an effective one as this is a dressy watch and needs to be treated with respect. That said, it would also look quite striking on a navy or dark green croc. 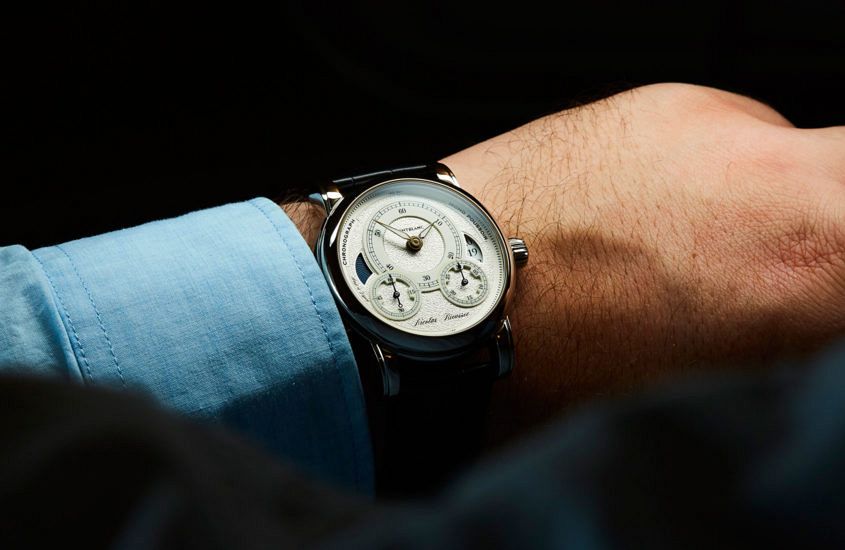 The Rieussec II is comfortable on the wrist, and the sort of watch you’re unlikely to see on anyone else in the boardroom. For me though, the collection marks an important transitional point for Montblanc – a clear evolution from the TimeWalker and 4810 collections, with its superior movement and genuinely unique design. It’s a precursor to the Heritage Chronometrie and Spirit collections that are the brand’s main focus today. Though the Rieussec seems to have been lost in the shuffle, occupying a space between their complicated heritage pieces and their Villeret collections, I think it deserves a place in the sun, as a strong, original design that’s emblematic of Montblanc’s watchmaking.

Want to see something cool? Turn out the lights.

The Montblanc aficionado who appreciates the unique style and great movement the Rieussec II offers.

I get that having the date on your watch is practical, but the implementation here doesn’t look great. A power reserve would have been perfect.

The Montblanc Homage to Nicolas Rieussec II is a limited edition of 565 pieces and has an RRP of $15,130.