When it comes down to wanting a flieger watch, everything is about the details. Do you want a smaller case? There are plenty of options from a bunch of brands. Left-handed crown? It’s rare, but not unheard of. A historical connection? Even then, there are five brands to choose from. The new Laco PRO Series is a revolutionary tool for those who want an authentic flieger experience without compromising their own personal tastes. With over 14,000 possible permutations, your perfect pilot can be just a few clicks away. 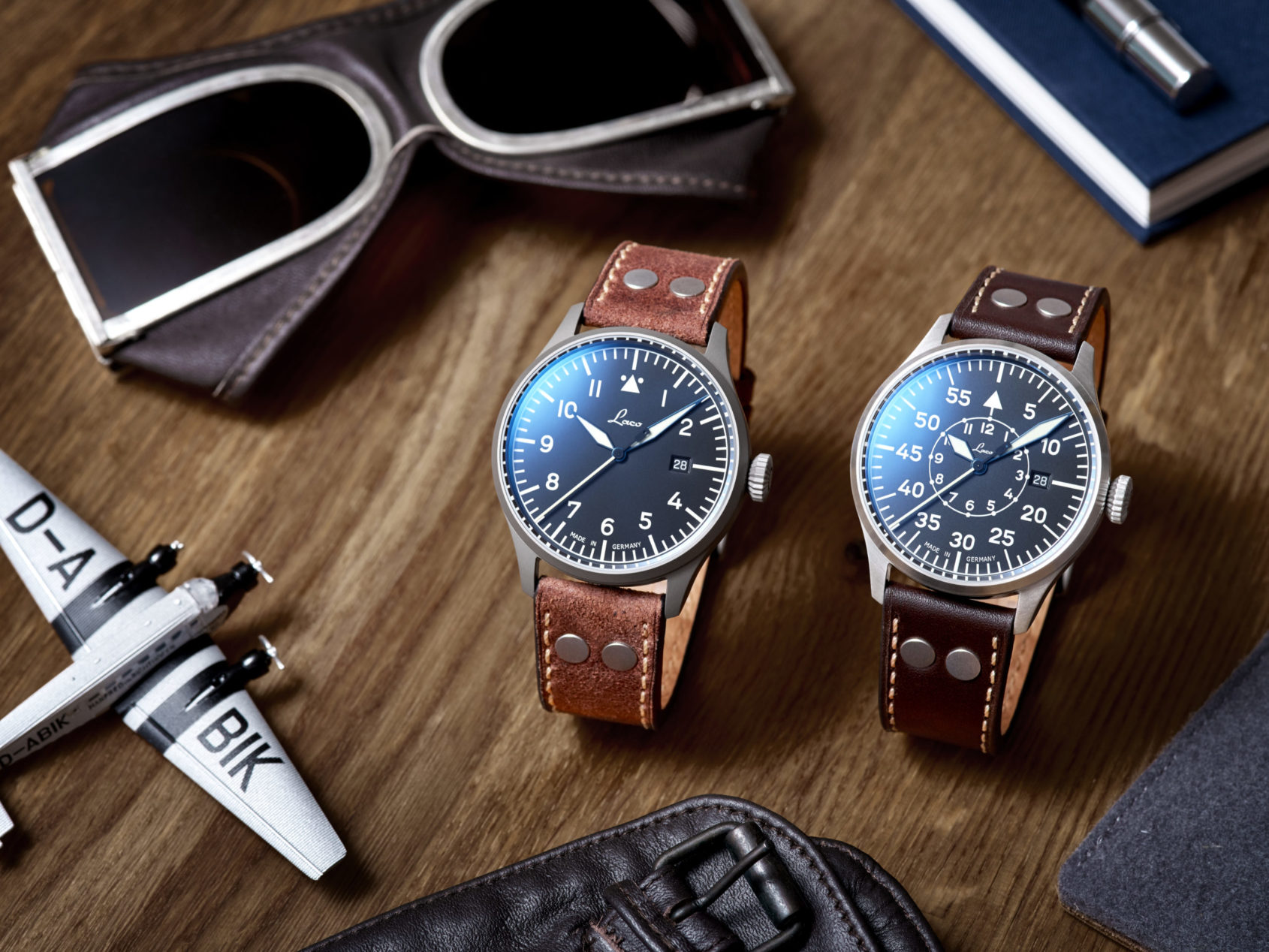 Laco are coming up to their centenary in 2025, and their history is one of their proudest assets. As one of the five original manufacturers of flieger pilot’s watches for the German airforce in WWII, the Laco PRO Series can claim to be the only authentic fully customisable flieger. They also happen to be one of the more affordable options, with prices that begin at only €850 despite high-quality production based in Pforzheim and the “Made in Germany” label proudly displayed. 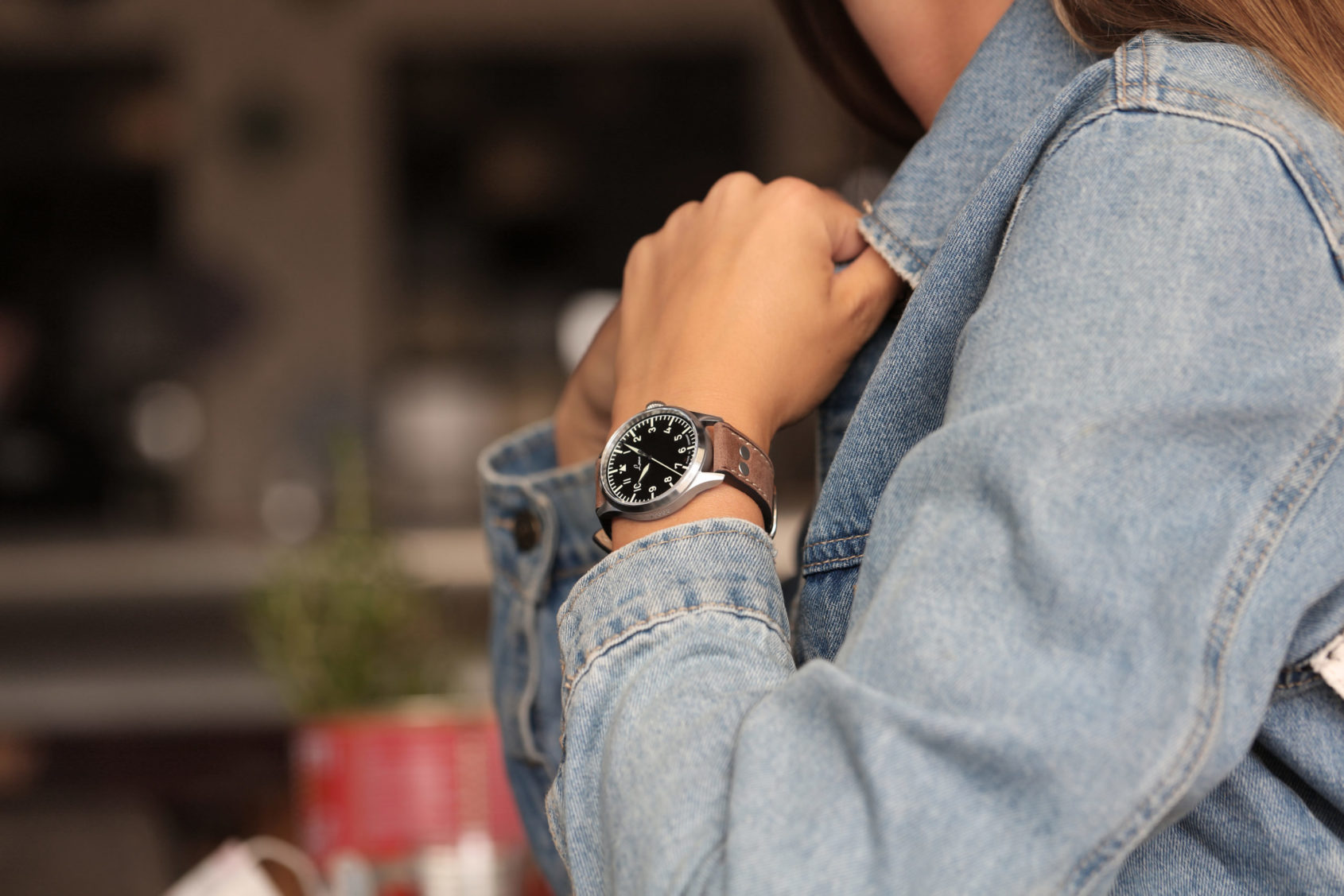 The case offered through the Laco PRO Series is by every definition a classic flieger shape, with a minimal bezel to allow for a more legible dial and smooth-sweeping lugs that finish in aggressively angled tips. The crown has that recognisable cone taper with a solid straight edge, making gripping it effortless. The side of the case is engraved with an “FL23883” inscription, which could be found on all of the original military-issued watches. The “FL” is associated with aviation equipment, the “23” relating to navigation, and the “883” served as a certificate of testing by the Deutsche Versuchsanstalt für Luftfahrt, or the German Research Institute for Aviation. 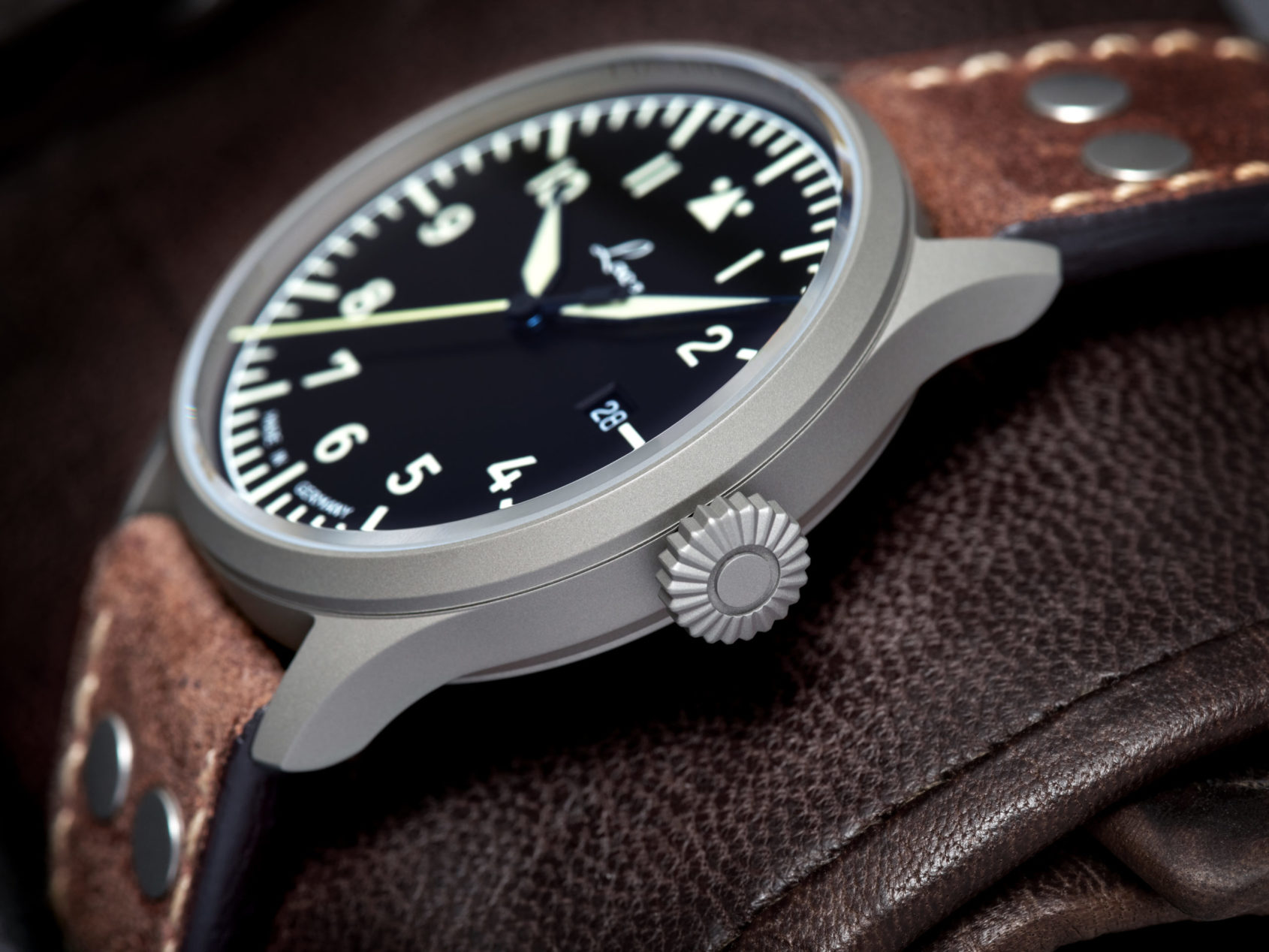 When it comes to options, the first and possibly most important choice pertains to the size of the case. With the smallest version available at 37mm, it’s reassuring that people with smaller wrists can still enjoy a genuine flieger experience without discomfort or a dinner-plate feeling on the arm. Some enthusiasts are quick to point out that historical examples of pilot’s watches could be as large as 50mm in diameter, however it’s important to remember that those examples were mostly worn by men and often over the top of a large leather flight jacket, purely for fast legibility. The next two sizes are 40mm and 43mm, catering to those who want something either goldilocks average or with some real wide presence. No matter your choice of diameter, all of the cases are around 11mm thick, which is a surprisingly slim measurement considering the optional use of automatic movements and 200m of water resistance. 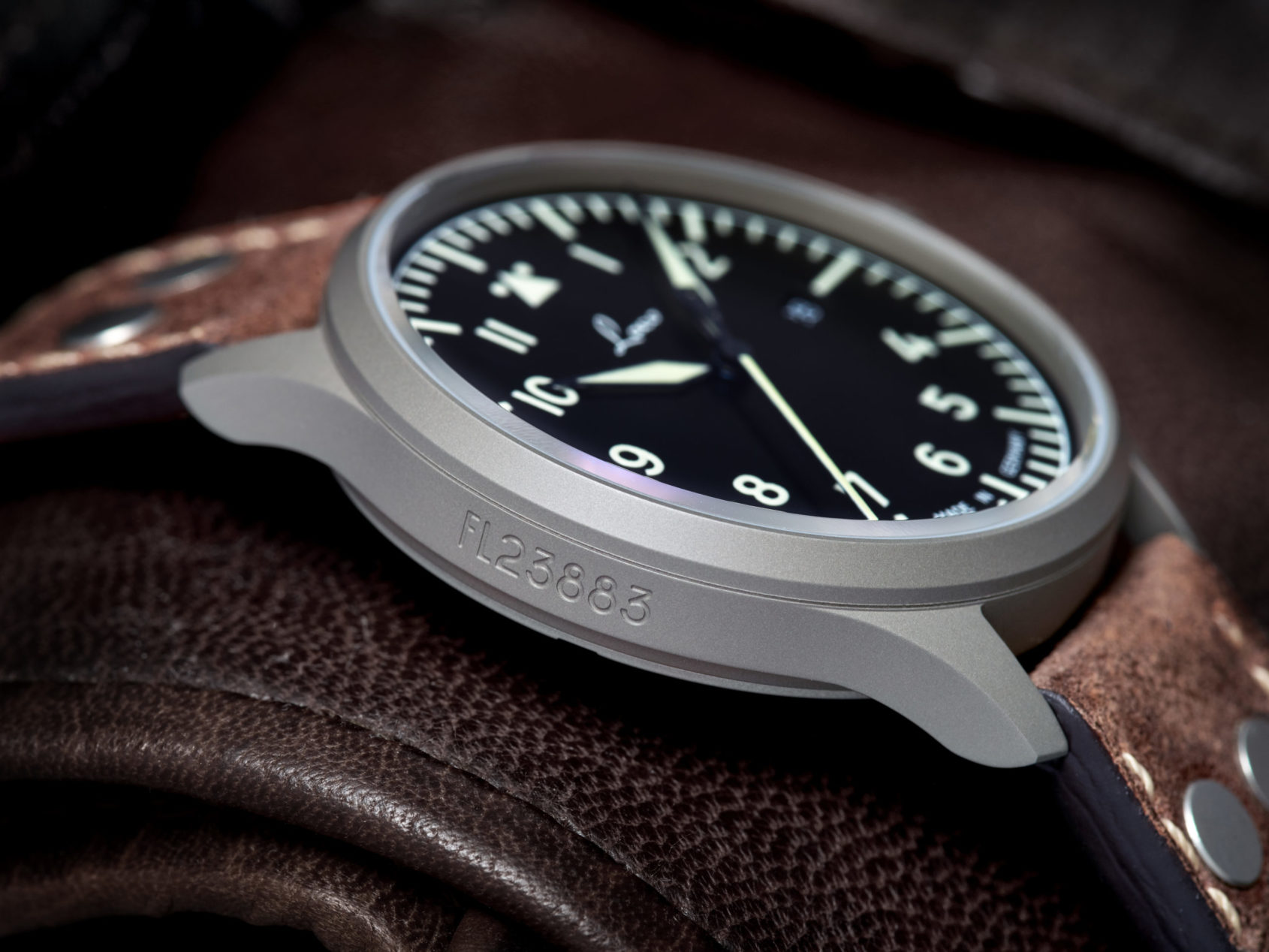 If lug-to-lug is your preferred metric for choosing a watch’s size, the 37mm model is 44.5mm long, with the next at 47.5mm, and the final reference at 50.5mm. The lug widths are thankfully all even numbers moving up the chain too, so you can easily swap around the straps for aftermarket options at 18mm, 20mm, or 22mm. Coming back to the thickness, from smallest to largest the cases are 10.95mm, 11.35mm, and 11.45mm respectively. 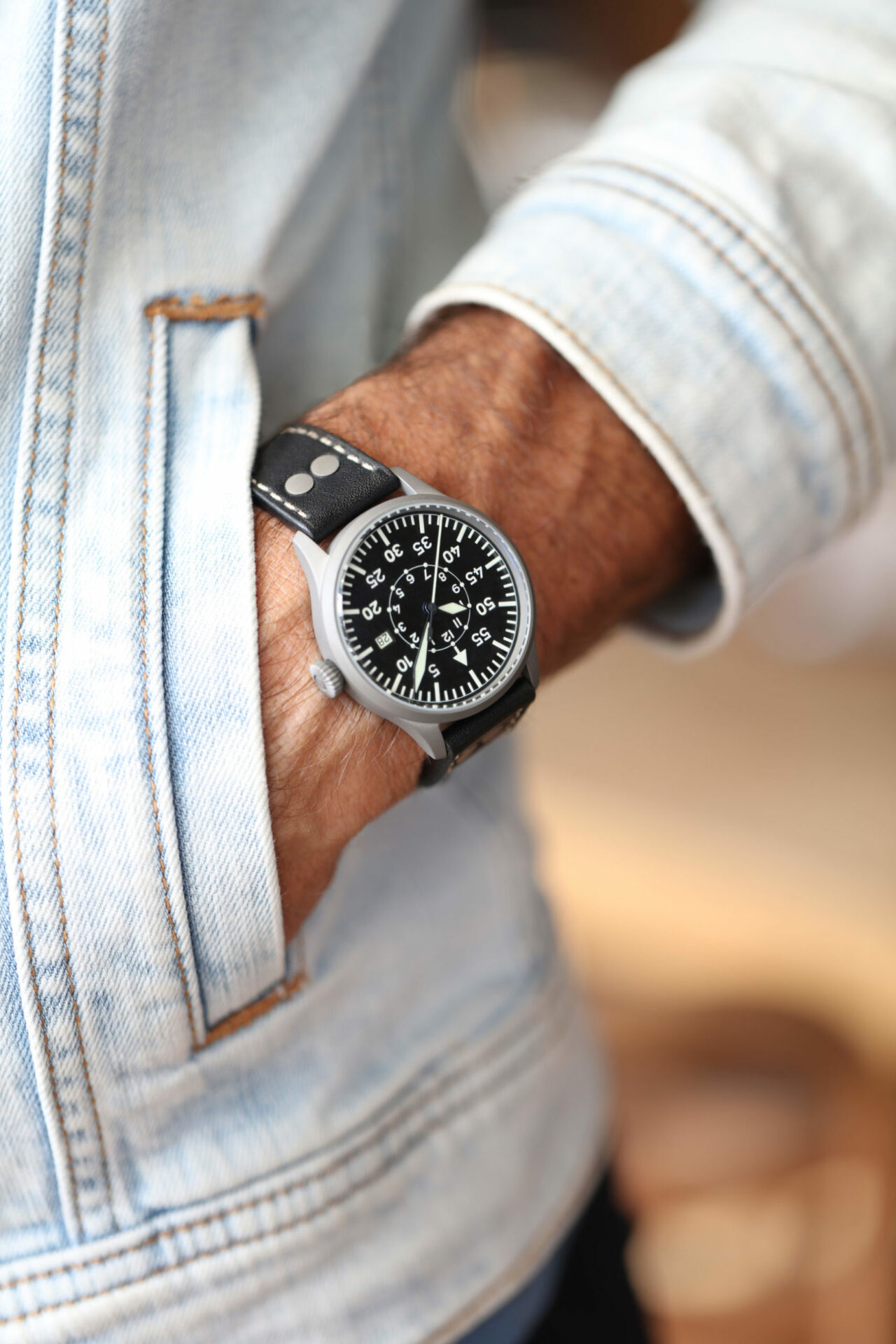 While stainless steel may be the only option for material, your choice of finishes extends to the classic all-brushed finish synonymous with scratch-prone tool watches or a dark-coated effect with matte sandblasting. The darker grey case gives the watch a much moodier tone, as well as knocking down any possible bright reflections that would theoretically be a hazard in a military situation. Besides that, you can also choose the orientation of the crown either at 3 o’clock or 9 o’clock. 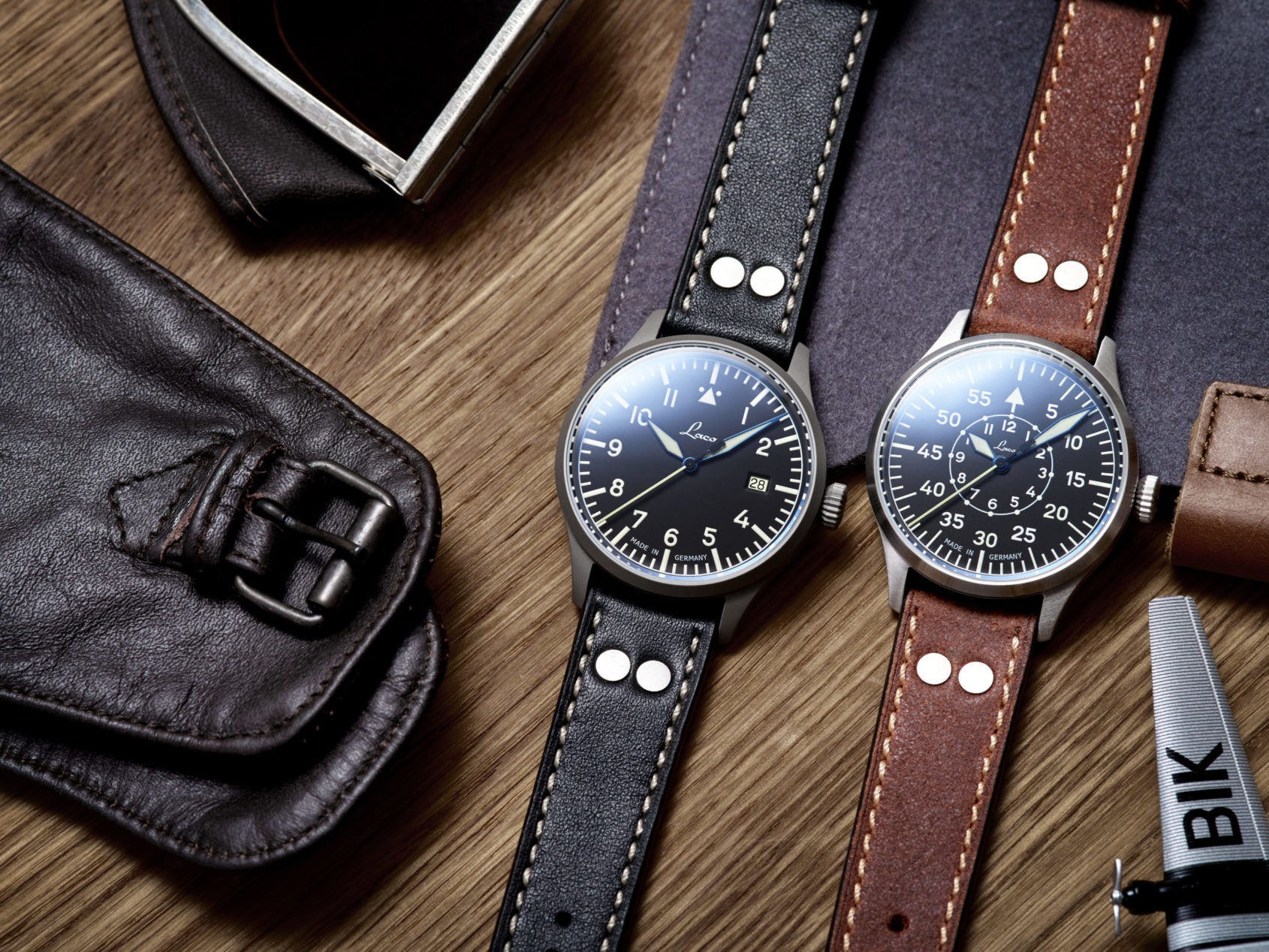 You may have heard of the terms Type-A and Type-B before in the world of German flieger watches, and that refers to the layout of the dial markings. Both employ bold light-on-dark strategies and clear Arabic numerals to ensure easy legibility, but they each hold slightly different appeals. The most classic example that has informed the entire design language of IWC is the Type-A dial, which the Laco PRO Series designates as the “Stuttgart”. The simple yet bold markers run around the perimeter of the dial at each minute, with the hours being elongated and bolded even further. Arabic numerals mark the hours from 1 to 11, with the 12 o’clock symbol comprised of two dots and a triangle that help orientate the reader in low-light situations. 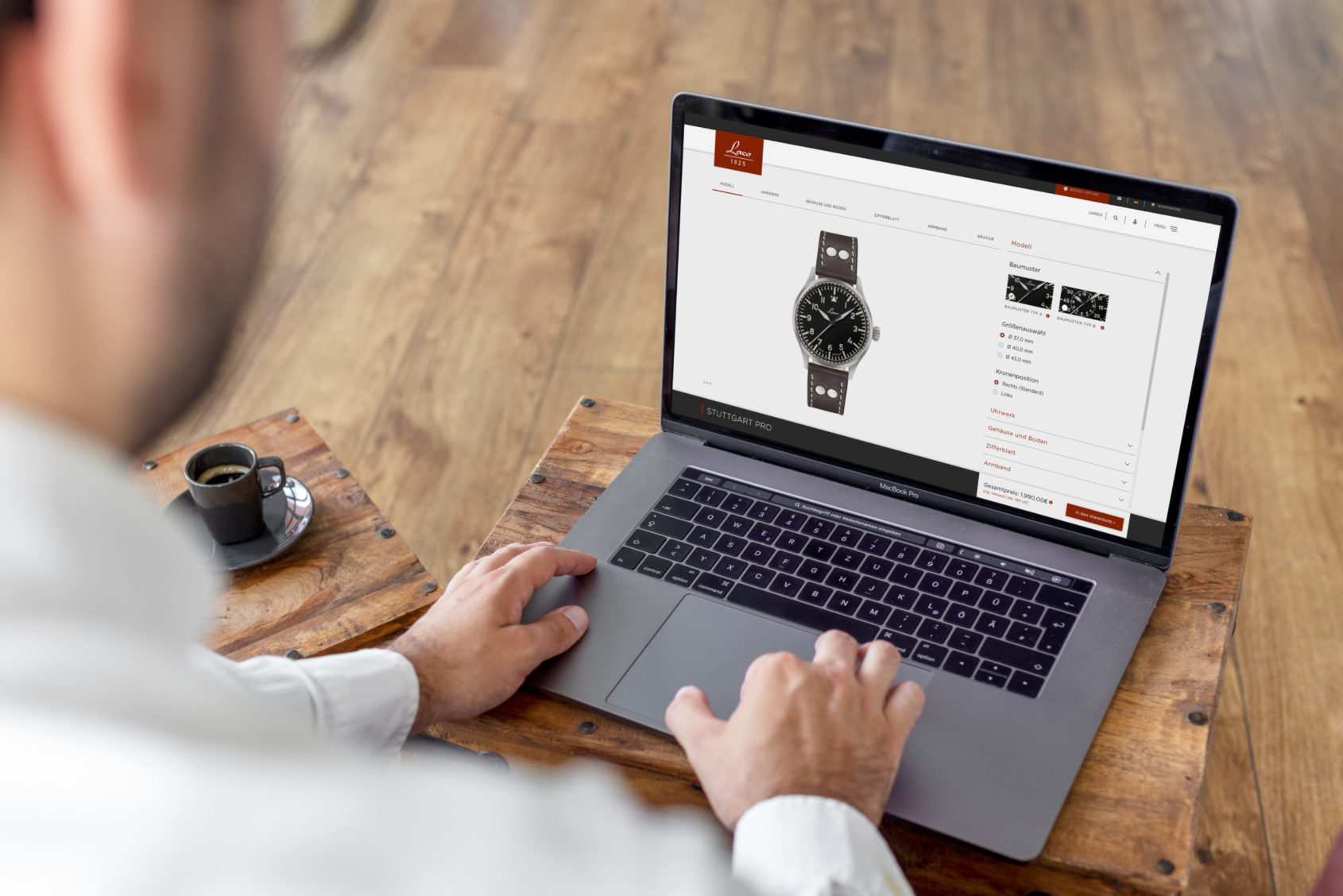 The Type-B dial is called the “Karlsruhe” and it has much more emphasis on the telling of exact minutes rather than the hour. A centre section shows the hour numerals that connect exactly with the hour hand, while the larger portion of the dial has numerals for each five-minute interval. The result is a much more complex look overall, but one that feeds further into the heritage aesthetic. Each dial can be chosen with or without the Laco logo and the “Made in Germany” label if you want true vintage accuracy, or if you just prefer a less cluttered appearance. 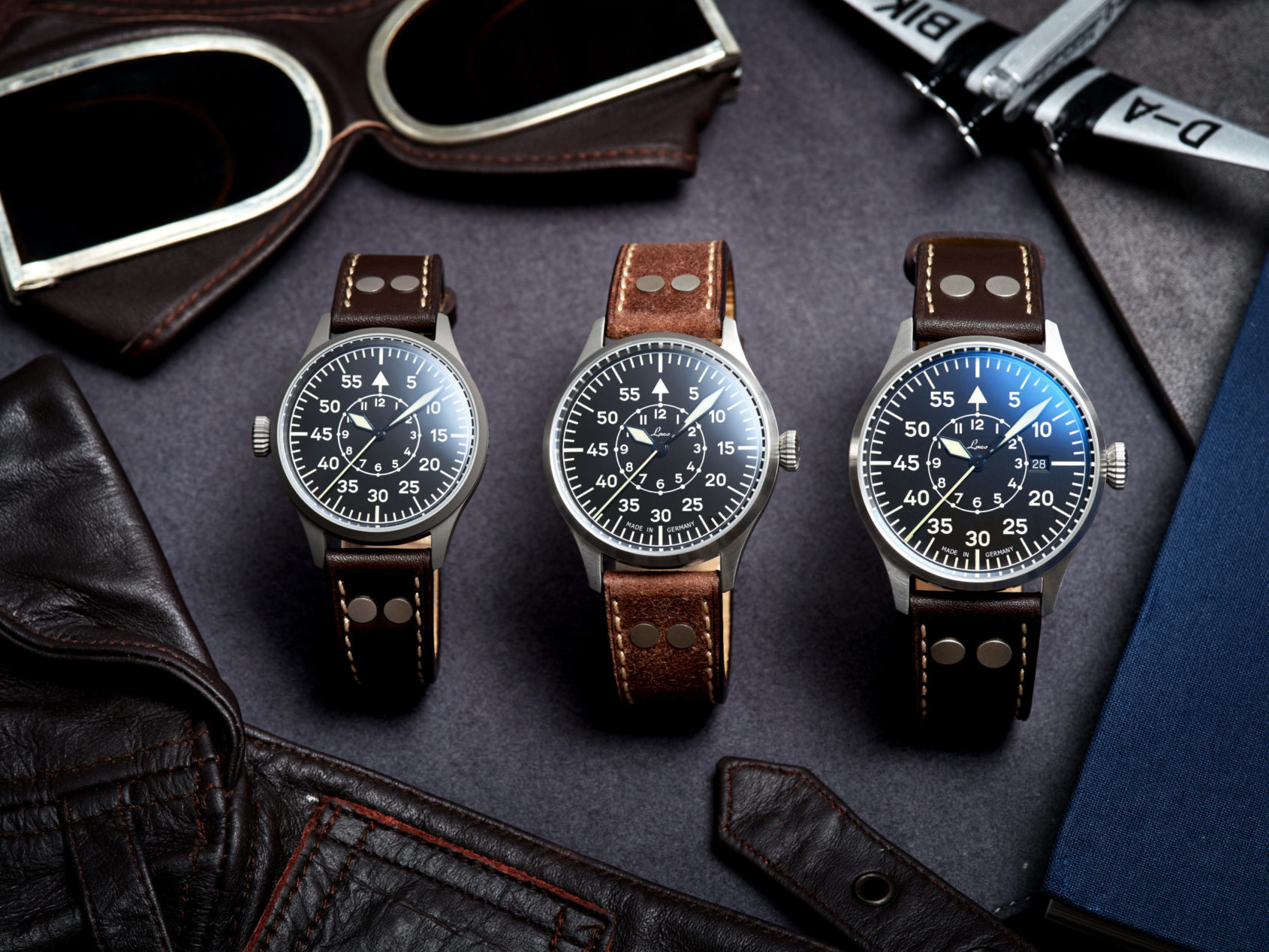 The final option for the dial itself is the inclusion of a date display, and whether or not you prefer a black wheel or a white wheel. Unfortunately the inclusion of a date does eliminate the ability to have a left-handed crown, as the movement wouldn’t be able to be rotated. Above the dial however, you can choose whether you want the sapphire crystal’s anti-reflective coating to be applied solely on the inside or both inside and outside. 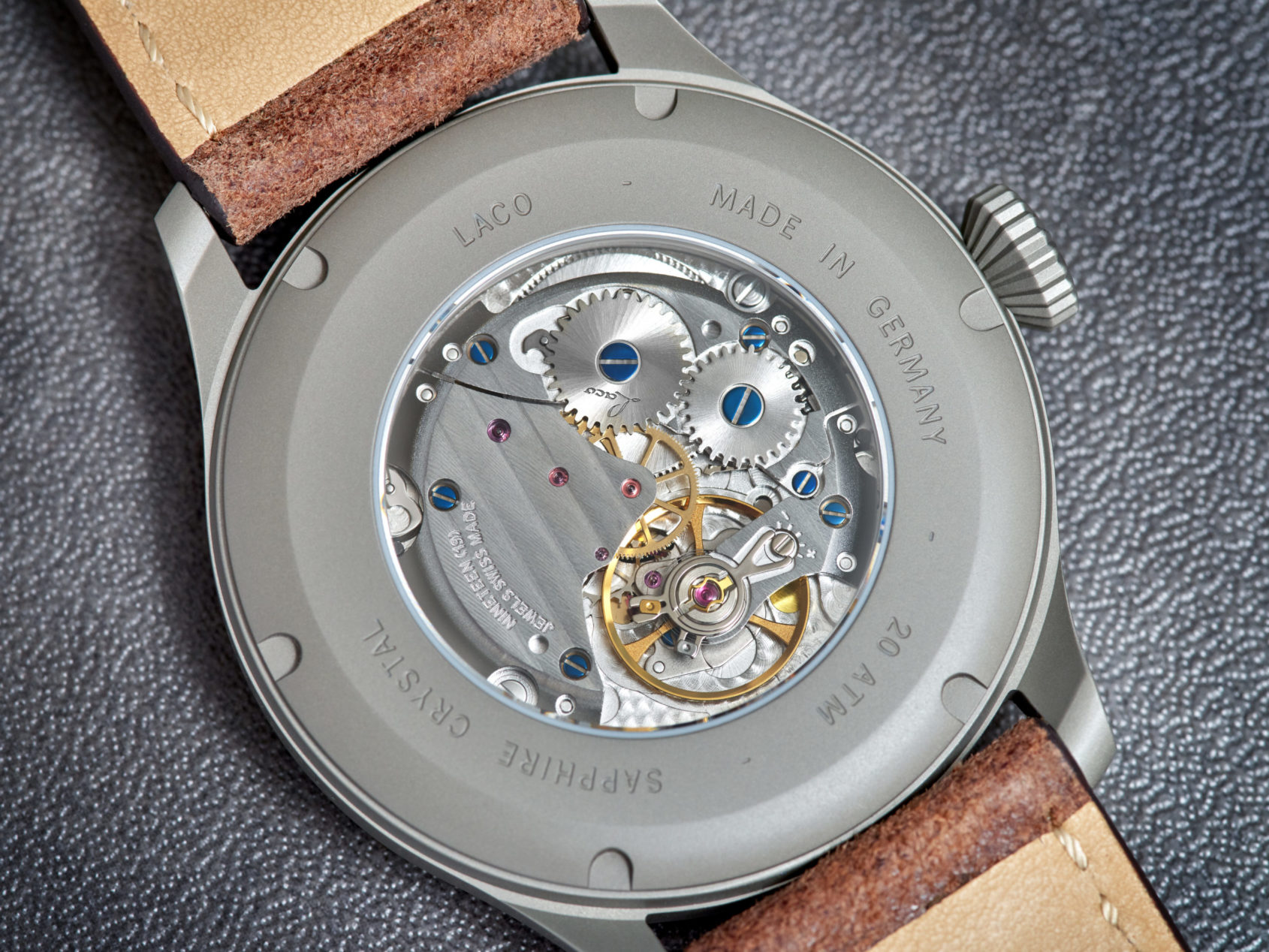 Keeping costs down and reliability high, Laco have elected to use Swiss-made Sellita movements for the Laco PRO Series. You can choose between automatic or manual winding, as well as whether the movement is Elaboré grade or Top grade. The main differences between the Elaboré and the Top grade movements are the balance wheel material and the accuracy, with Elaboré regulated in three positions to within +14 seconds per day and the Top grade regulated in 5 positions to within +8 seconds per day. You can also choose whether or not the movement is decorated, including a custom engraving up to 10 characters on the winding rotor. The caseback is solid by default, however the sapphire display version is available and can also be customised with an engraving. 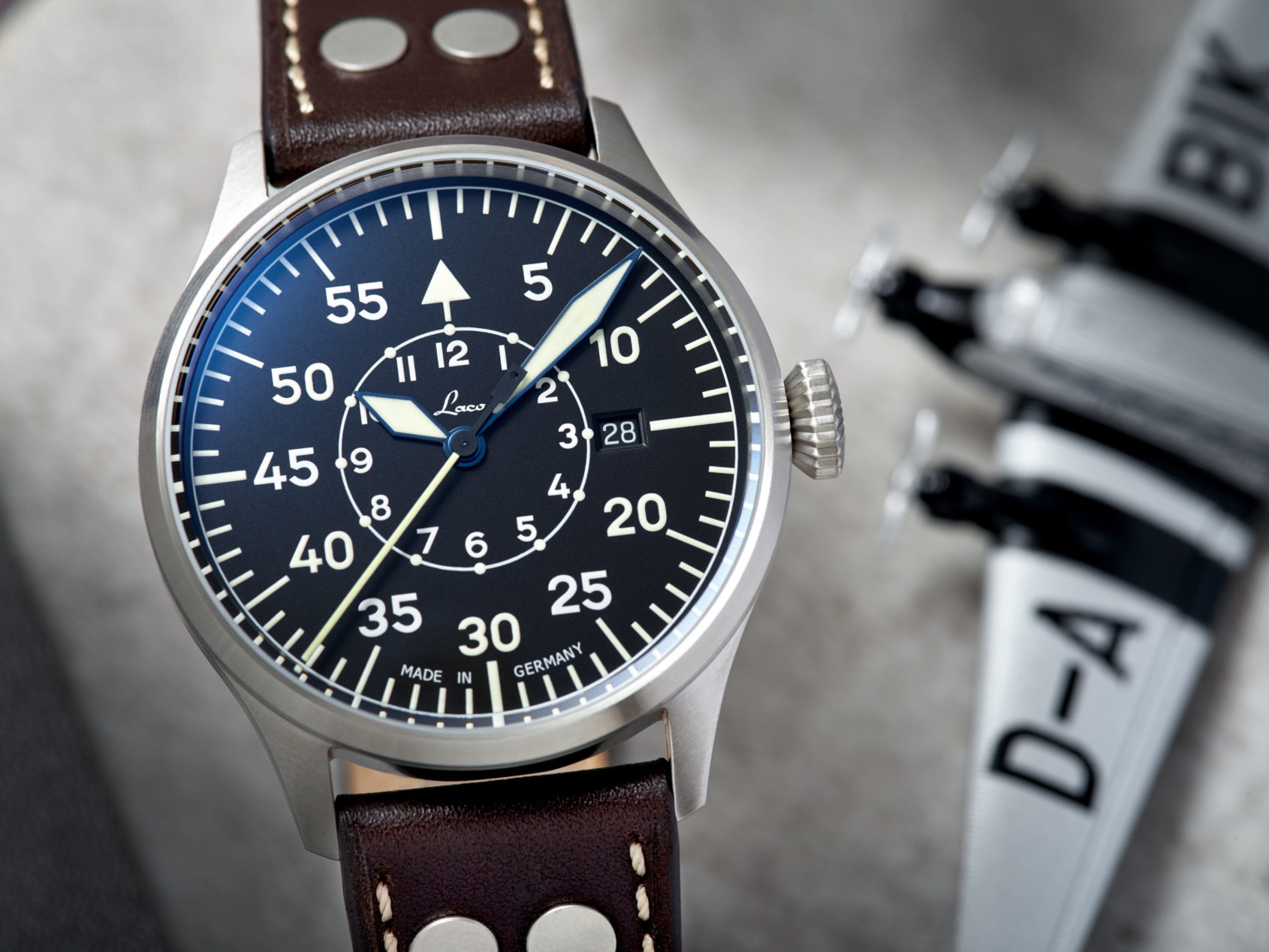 You can start customising your own Laco PRO Series flieger at this link here, and experiment with all sorts of configurations. Price: €850 – €1,560