The Drive de Cartier is the men’s Cartier we’ve been waiting for; stylish and refined with a dash of sports luxe. 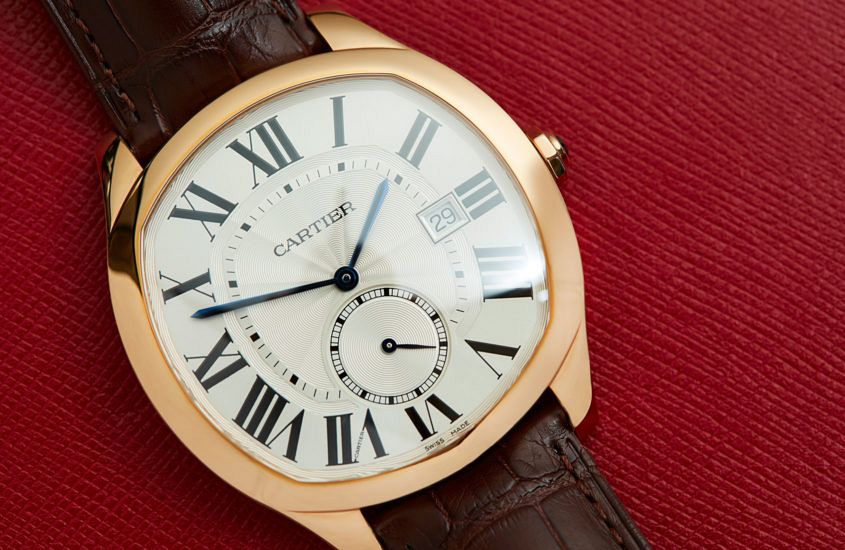 SIHH 2016 was a restrained affair, most brands playing a game of wait-and-see with the global luxury watch market. One exception was Cartier. Its Drive de Cartier stood out – a dedicated men’s collection that took Cartier’s classic style and put it in a new cushion-shaped case that’s masculine without quite as much testosterone as the dive watch or the sports chronograph. No, the Drive is a watch with nothing to prove. It’s a watch confident in its identity. Think James Dean in East of Eden. 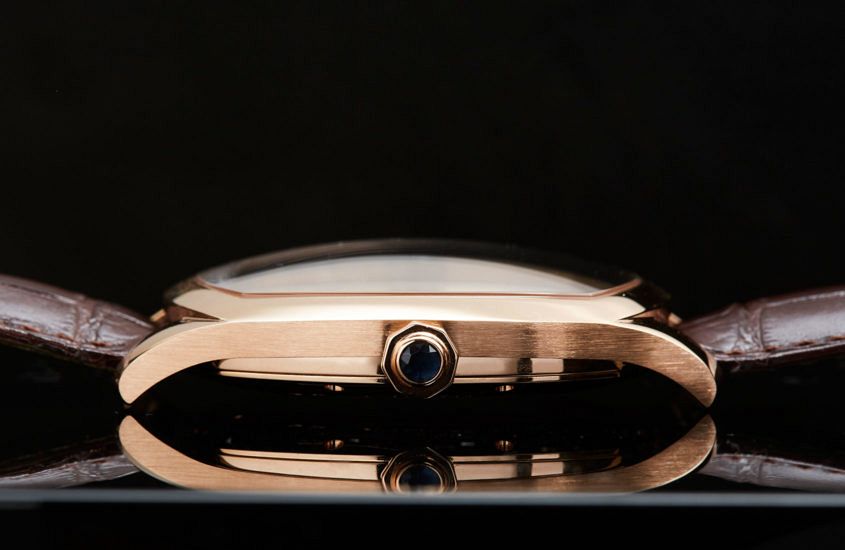 The case is the star of the show here. First off, it oozes style with a cushion shape that remains conventional enough to avoid looking out of place while being far from your typical round watch. It’s well proportioned too; at 40mm by 41mm, it’s large enough to have presence without any risk of ungainliness on smaller wrists. But the real joy of this case is something you can’t fully appreciate in pictures: its curves. And we don’t just mean those you see from the top-down view. The curves of the profile are just as enchanting. 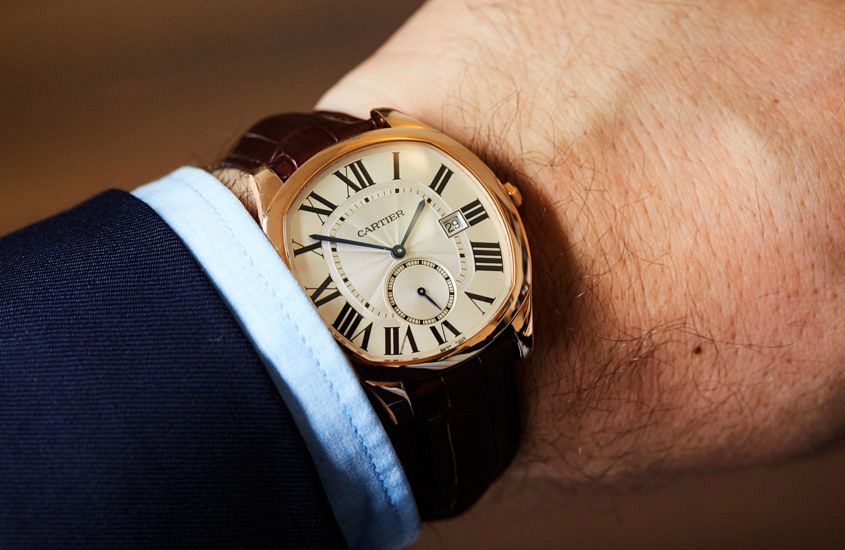 There’s the high curve of the sapphire crystal, paired with the more subtle contour of the bezel, and finally the prominent arc of the case middle, which extends down into the lugs. This section is brushed to contrast the predominantly polished finish of the rest of the watch. Resulting in a shape that hugs the wrist, this makes it a very comfortable watch to wear. Meanwhile the octagonal crown set with Cartier’s trademark blue-faceted sapphire provides an angular offset to all those curves, the perfect final touch. 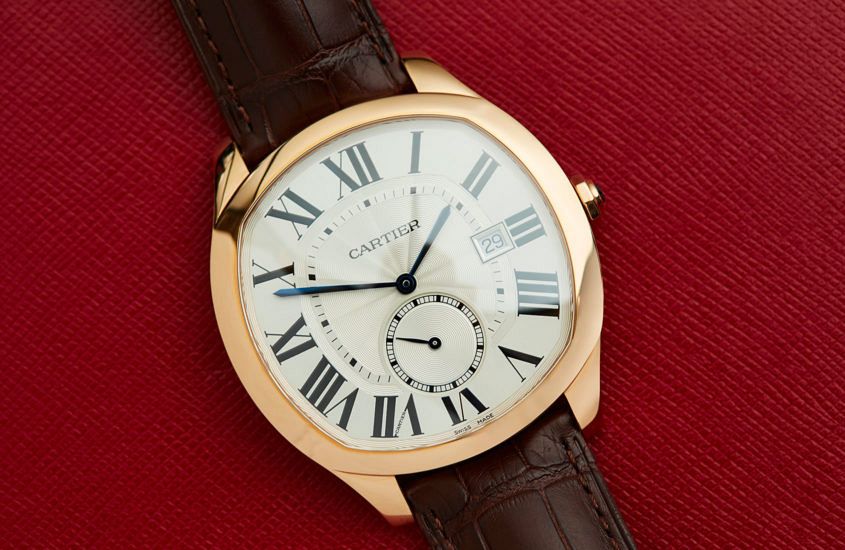 If the case is new, the dial is pure old-school Cartier. From the Roman numerals to the blued sword hands all the way down to the very fine flinqué guilloché finish, there’s no need to read the name on the dial to know what you’re looking at. Still, for all its familiarity there’s plenty here to draw the eye. The alternating tracks of guilloche and printed numerals/minutes are a subtle touch. And the small seconds, with its concentric guilloche finish adds balance to the dial. Even the date – often a bugbear for purists – is well done, with its own demarcated patch of dial, and aperture boundaries that line up neatly with the III. On the subject of numerals, you’ll notice that this Drive (and indeed most watches with Roman numerals) uses a IIII instead of a IV. Fun fact: this is known as ‘watchmaker’s four’ and it’s simply because a IIII better balances out the VIII and creates a more legible dial. So now you know. 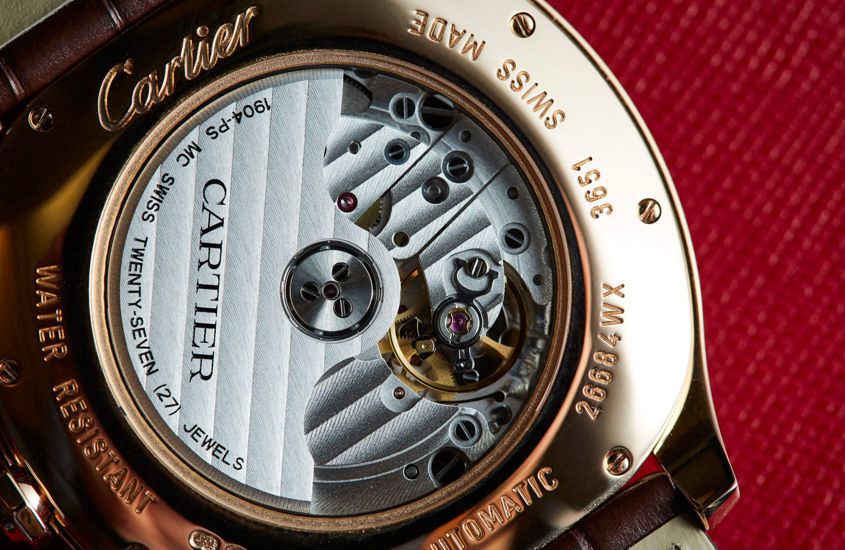 Behind the pretty face is the beating heart of the Drive, otherwise known as the 1904-PS MC movement (PS is for petite seconde, by the way). Cartier’s in-house workhorse was first released back in 2010, easing the brand’s reliance on ETA ébauches. It’s a smartly finished movement – the C-shaped regulator is a nice touch. Power reserve is at 48 hours, which is fine, though the latest comparable in-house movements tend to offer around 70 hours as standard.

This Drive came on a fairly padded brown alligator strap, which is elegant, but not as formal as black. While gold models should probably stick to croc, the steel versions would look great on more casual calf or even suede strap options. The low point for me is the deployant with the single fold pink gold deployant. Though it’s a good match for the pink gold case, I found it a little fiddly to open and close, though perhaps that stiffness would ease up with use. 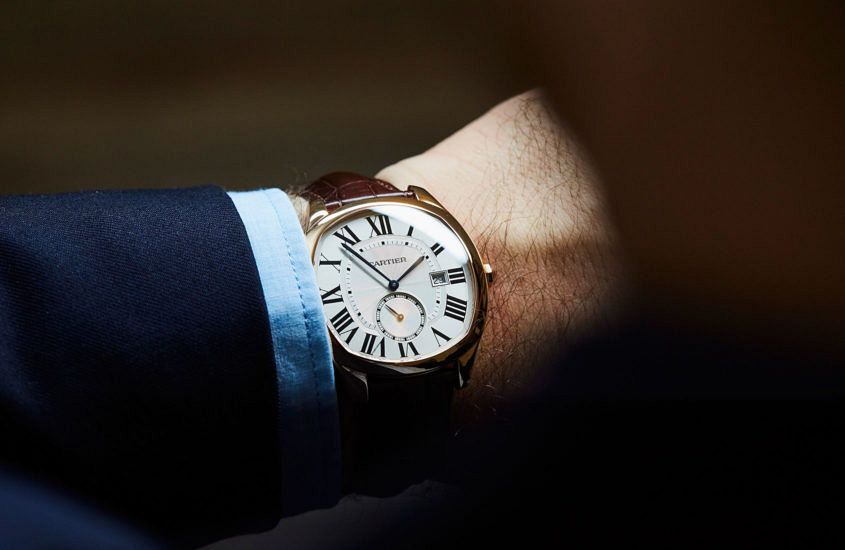 Absolutely no complaints in this department. The Drive strikes a perfect blend of formal and casual. You could easily wear this from Monday to Friday with a suit, and then pare it back on the weekend with casual shirts and light knits.

The Drive de Cartier is an excellent follow-up to the Clé, both serving as strong, contemporary designs that remain true to the brand’s design DNA. However, I was a little surprised by the price. While the steel version is competitive at $8750, this pink gold version retails at $27,100. By comparison, the Rolex Cellini Time in Everose is $19,250 and the Omega De Ville Trésor in Sedna gold $21,575 – with all three watches on par in terms of style and quality.

Oh, you asked for the time? Sorry, I was so distracted by how beautiful my watch is to check.

Honestly, of all the men’s watches Cartier has released in recent years this one has the widest appeal. So if you’ve always liked the idea of Cartier, but weren’t sure where to start, the Drive is a great place.

What would we change

A less fiddly buckle would be appreciated, and honestly I think the style of this watch would be well-suited to a regular pin buckle rather than a fancy deployant.