The story in a second: The Bremont H-4 Hercules offers a tool watch, which could pair with a dinner jacket, and doesn’t lose any Bremont DNA. 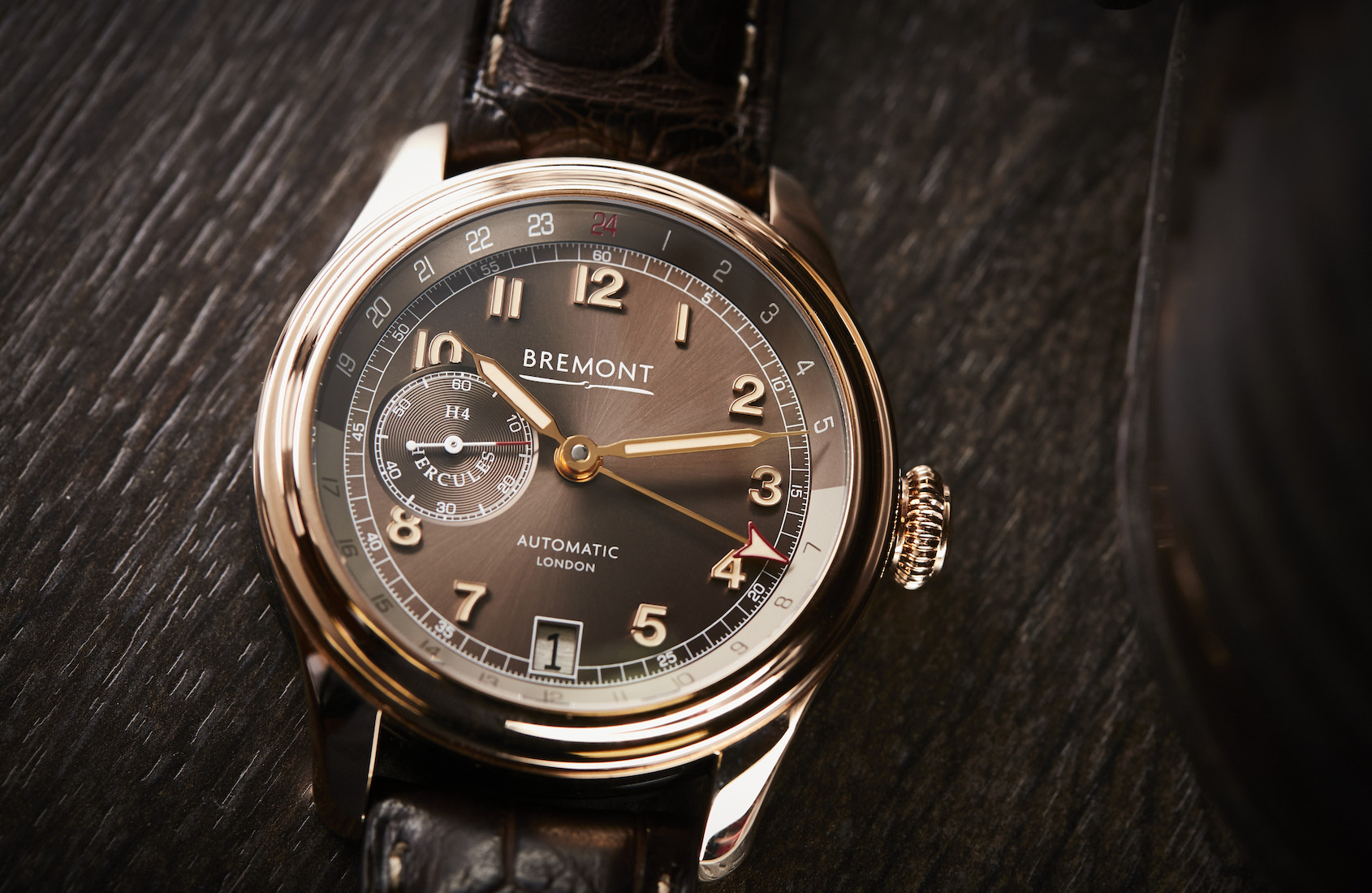 In any piece of design, there is a source of inspiration that is at least, in part, responsible for the final product that you are looking at. In the case of the Bremont H-4 Hercules, the source of inspiration requires a look back over 70 years into the history books. The year was 1942, and the Second World War was at a peak in the conflict, with fierce battles being fought across land, air and sea. It was the battle of the seas that the Allied powers were losing however, with the Nazi U-boat proving to be a formidable weapon against supply and troop ships, sinking 681 vessels by the middle of that year. Despite the war machine industrialising the ship-building process to improve the completion speeds of ship builds by more than 700%, the Germans were still torpedoing them faster than they could be made. 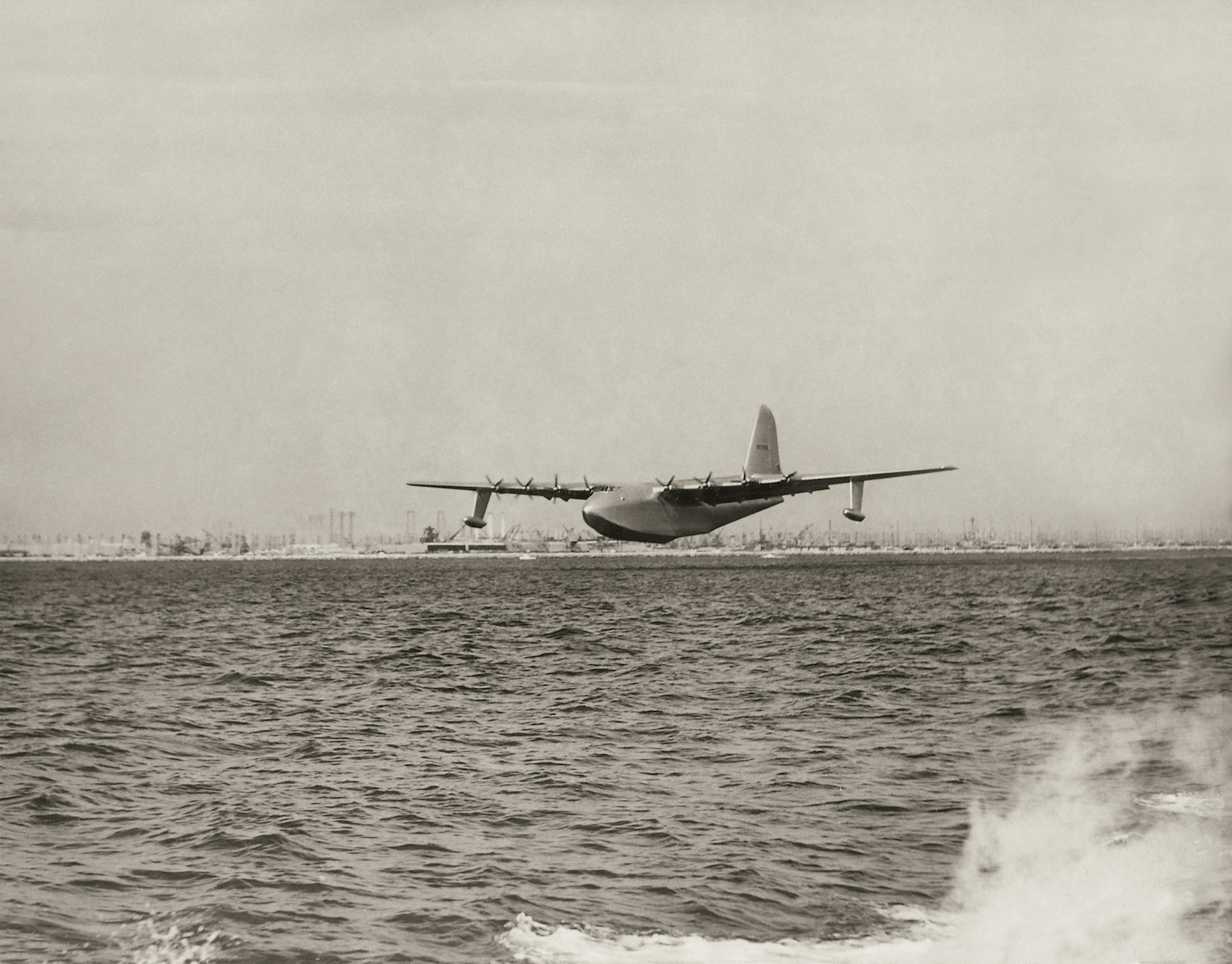 In an example of the simplest solution sometimes being the best, American industrialist Henry Kaiser had the bold idea to simply get out of the water. His answer was to build enormous seaplanes that functioned as freight ships but completed their journey almost totally in the air. Realising that such an undertaking would be hugely expensive if it were to work, Kaiser turned to the only man with the access to resources and the unfettered ambition – American billionaire Howard Hughes. Hughes had risen to fame in the late 1920s after he began producing films in Hollywood, but was also the owner of the Hughes Aircraft Company as a result of his passion for aviation, which led him to set an air speed record in 1935. Hughes enthusiastically took on the H-4 Hercules project with Kaiser, and after securing a government contract, began work on the aircraft. 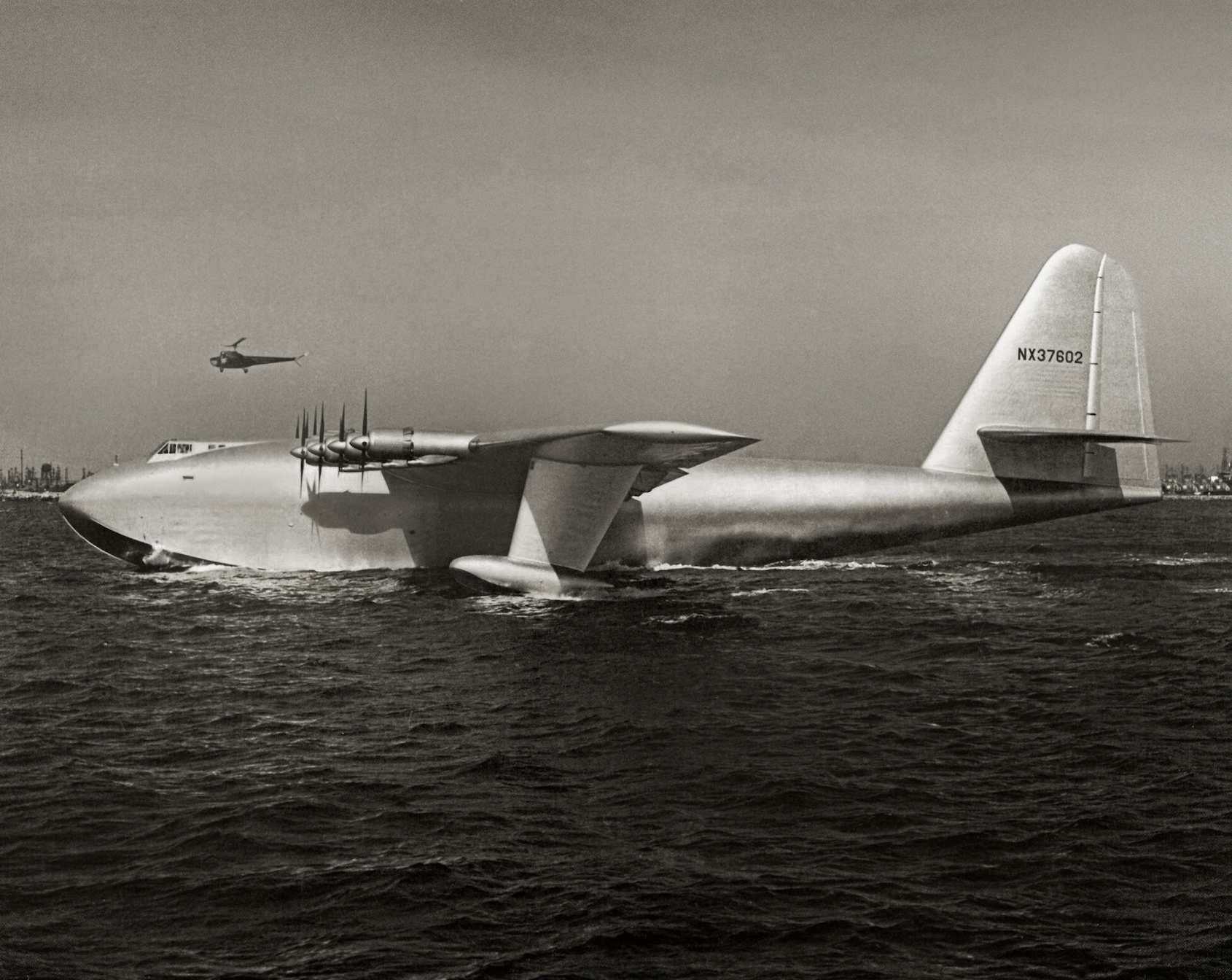 Unfortunately for the minds behind the project, the H-4 Hercules wasn’t completed in time to participate in WWII, and was finally finished in 1947 with a development cost of more than $280 million (adjusted for inflation). The resulting behemoth was the largest aircraft ever made, with a wingspan of 97.5m, a tail height of 24m, and a load capacity of 68 tonnes. 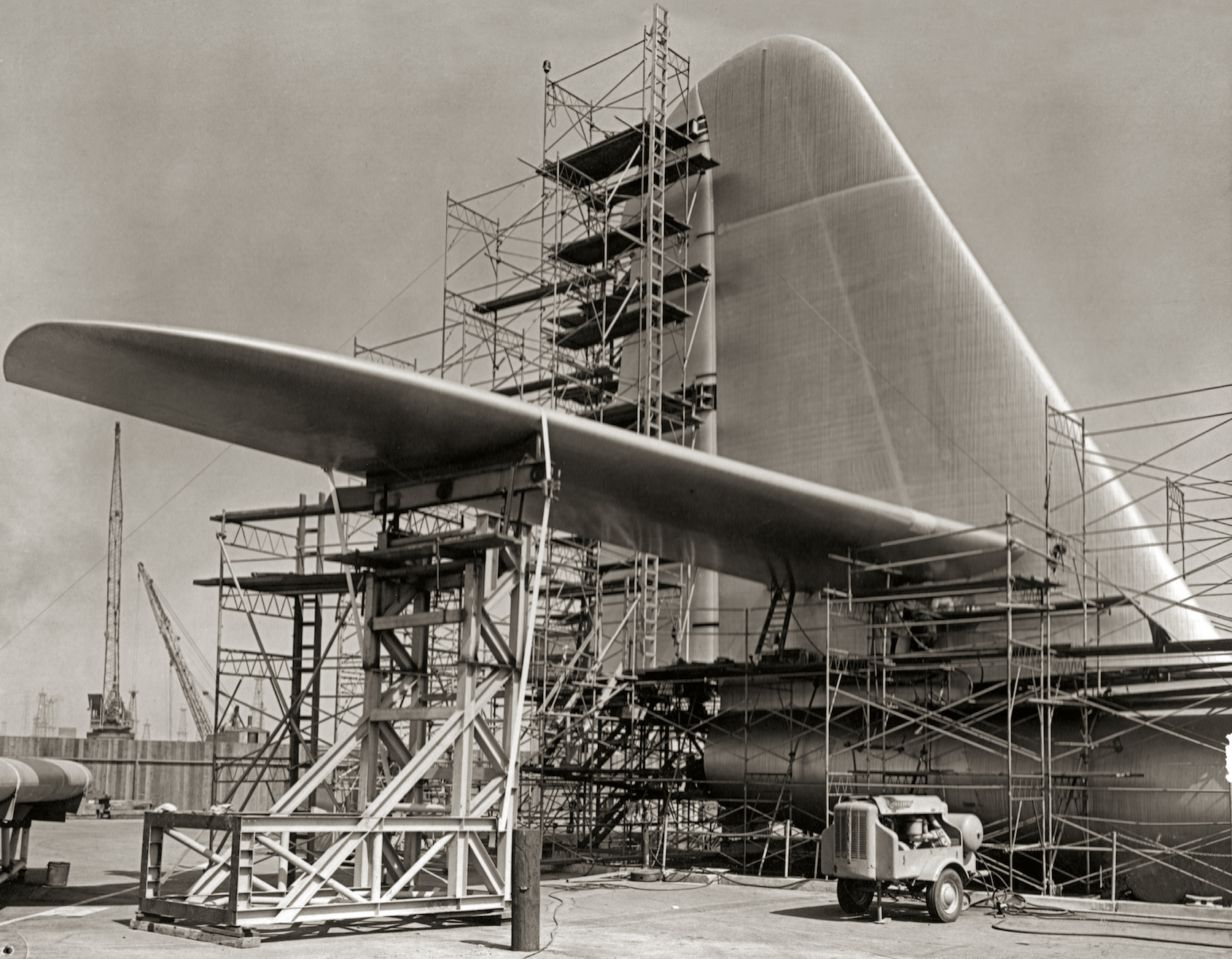 It was this incredible feat of aeronautical engineering that inspired the Bremont H-4 Hercules, a watch with notable heft, and a piece of the original H-4 Hercules in its case. 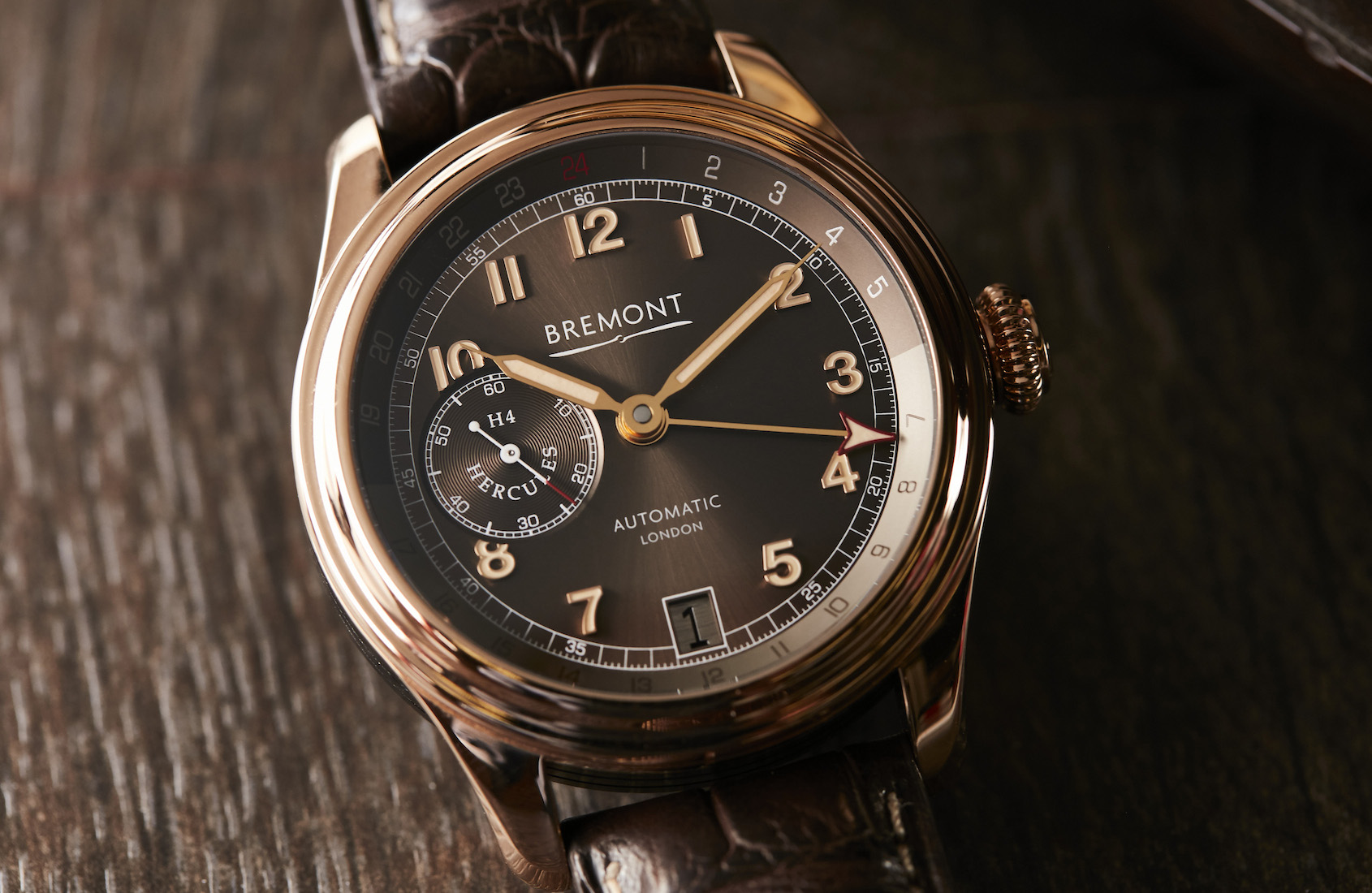 The dial of the Bremont H-4 Hercules is a a rich, chocolate brown that nicely complements the rose gold case tone. The Arabic numerals are bold and luminous, typical of pilot’s watches, and mounted on the centre stem with the hour and minute hands is a red-tipped GMT hand, also typical of pilot’s watches. Adding to the functionality of the GMT hand is a two-tone chapter ring around the dial, indicating the day/night of the GMT time zone. At the 9 o’clock position we find a seconds sub-dial with a concentric circle pattern that adds texture to the dial, and also features the text “H4 HERCULES”. At 6 o’clock there is a date aperture with a pleasing coppery-tone date disc that blends seamlessly into the rest of the dial. 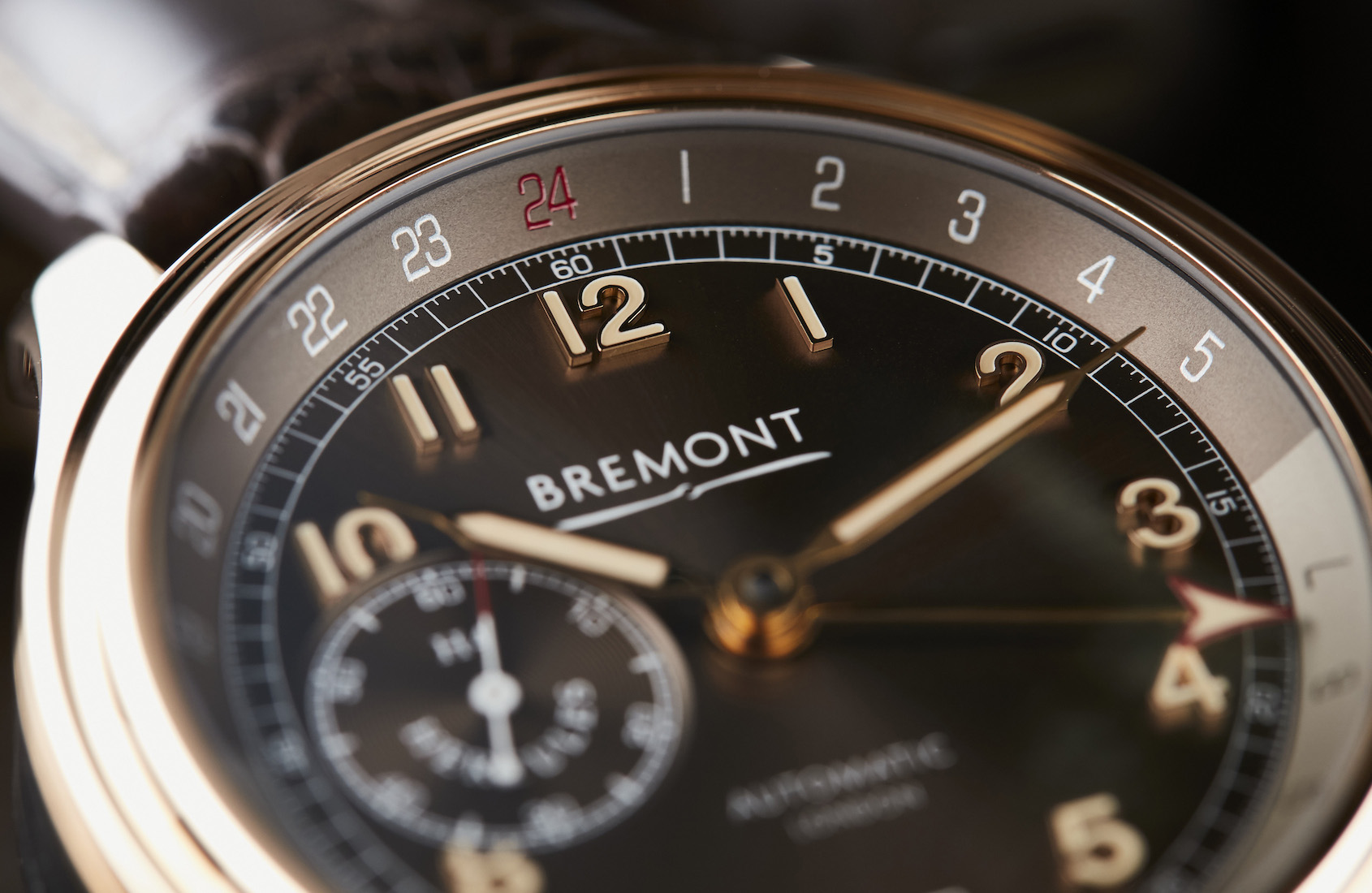 The rose gold case offers a charming warmth, and while on the larger size, at 43mm in diameter, it is consistent with historically larger pilot’s watches that offer greater dials and therefore greater legibility. The oversized crown screws down into the case to guarantee 100m of water resistance, and the case-middle is the same cylinder-like style seen in many Bremont watches, expressing their design language. While the dial side of the case looks good with a flowing stepped bezel and downwards swooping lugs, the real treat is when you flip it over and peek through the open caseback, but we’ll get to that in a moment. 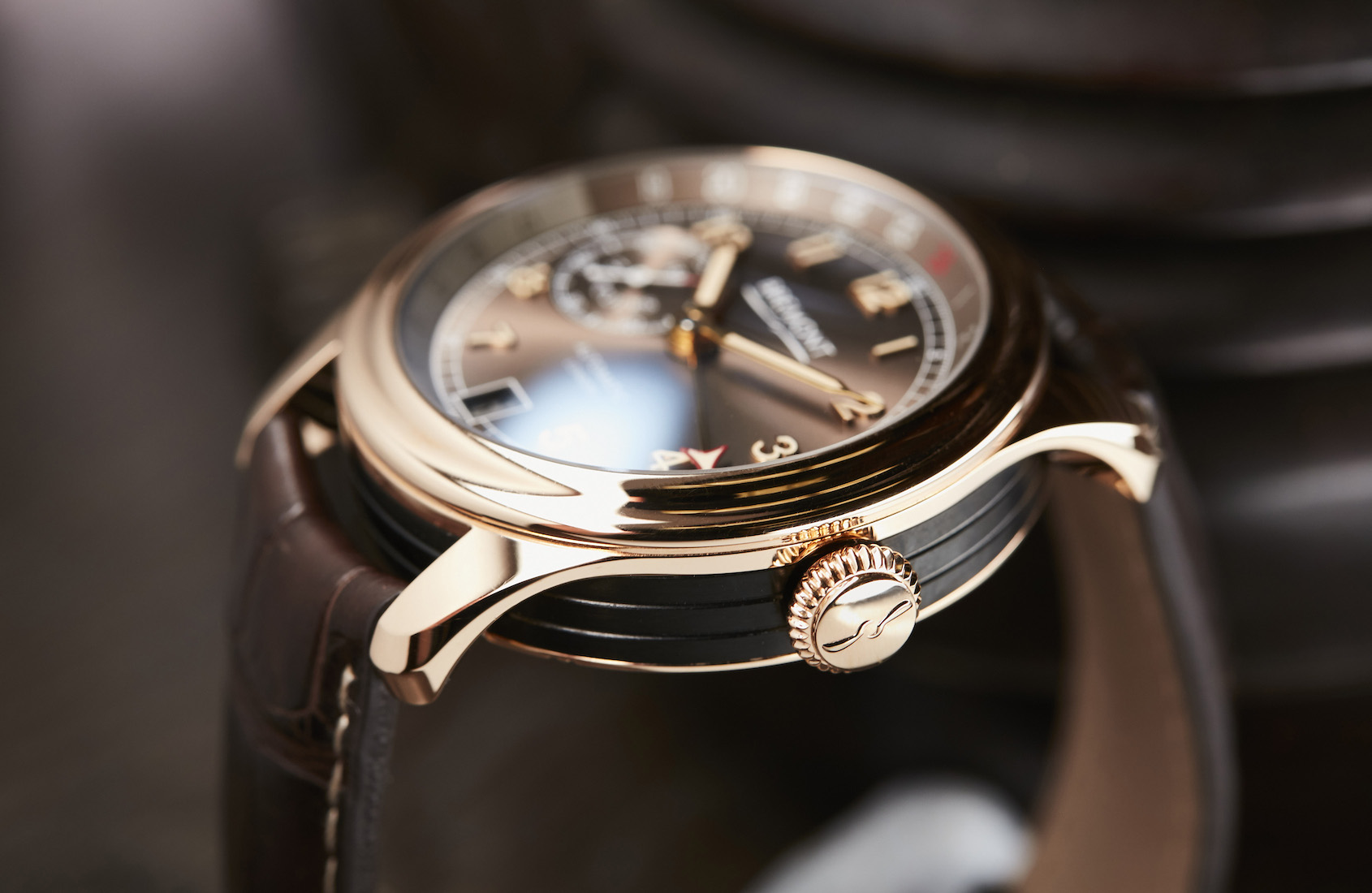 The bezel of the H-4 Hercules is unobtrusive, with the rose gold seeming to cascade away from the dial like a Cognac fountain. True to their own history, Bremont have not used a complicated slide-rule bezel that is sometimes seen on pilot’s watches. 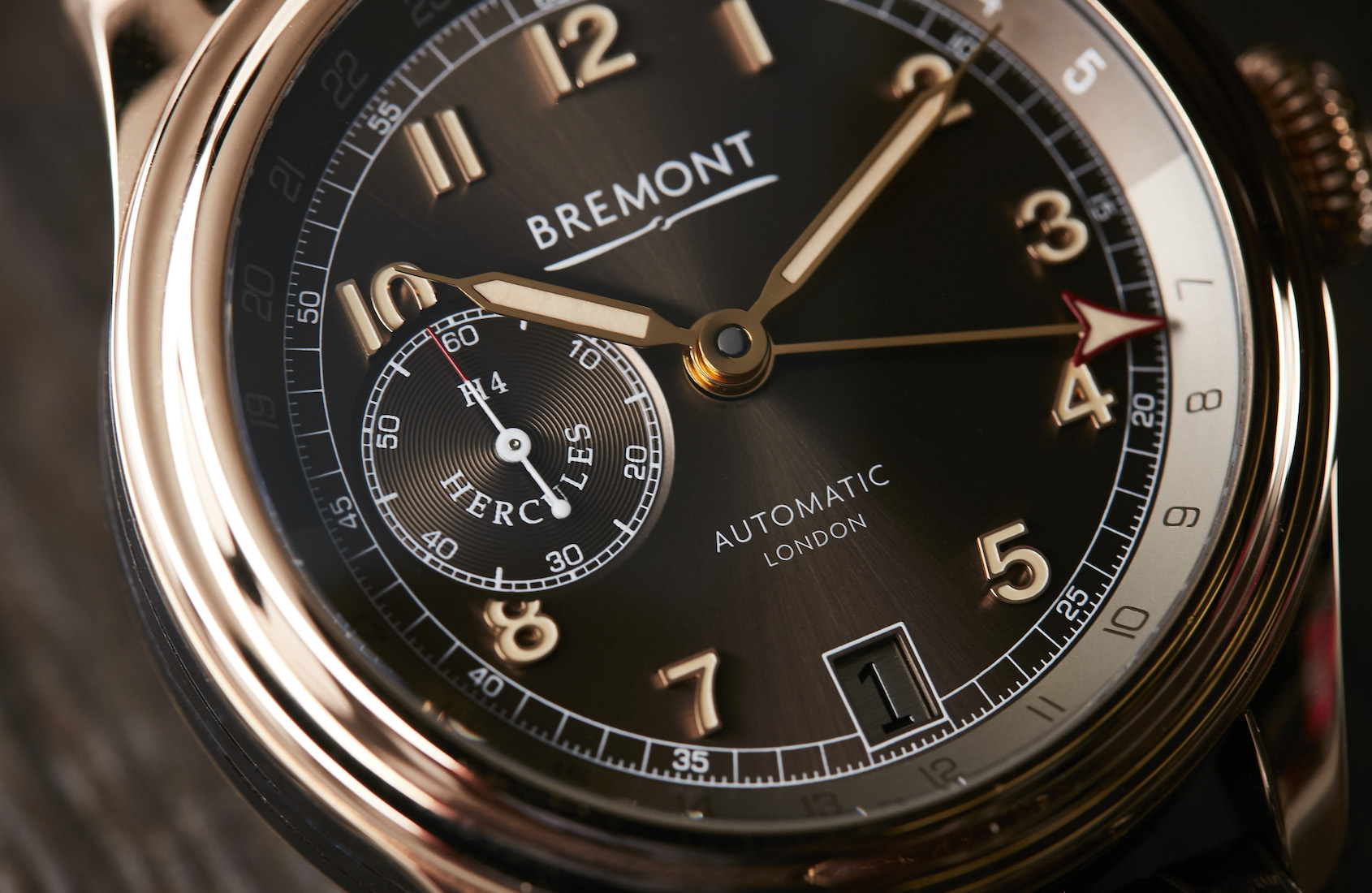 The H-4 Hercules is powered by the 25-jewel Bremont BWC/02 movement, which is nicely finished and coloured slate-grey. The rotor is the crown jewel, however, with it shaped appropriately like a 4-blade propeller with each blade being inlaid with birch wood from the original H-4 Hercules from 1947. The weighted section of the rotor is engraved with the text “SPRUCE GOOSE”, which was the nickname of the H-4 Hercules. 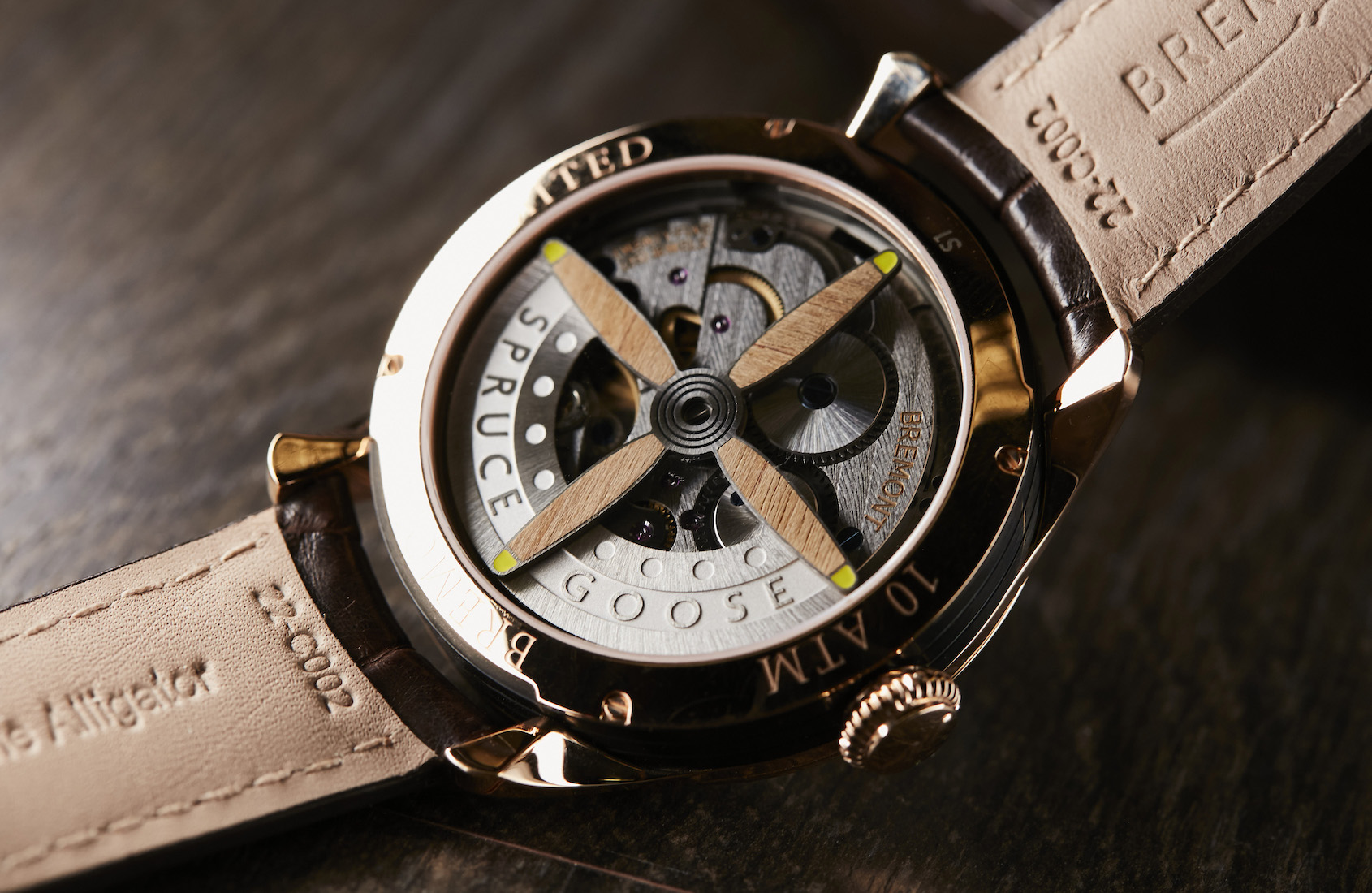 The Bremont H-4 Hercules is paired with a thick brown alligator leather strap, which visually matches the case and dial, and feels robust enough to survive the rigours of life in a cockpit. 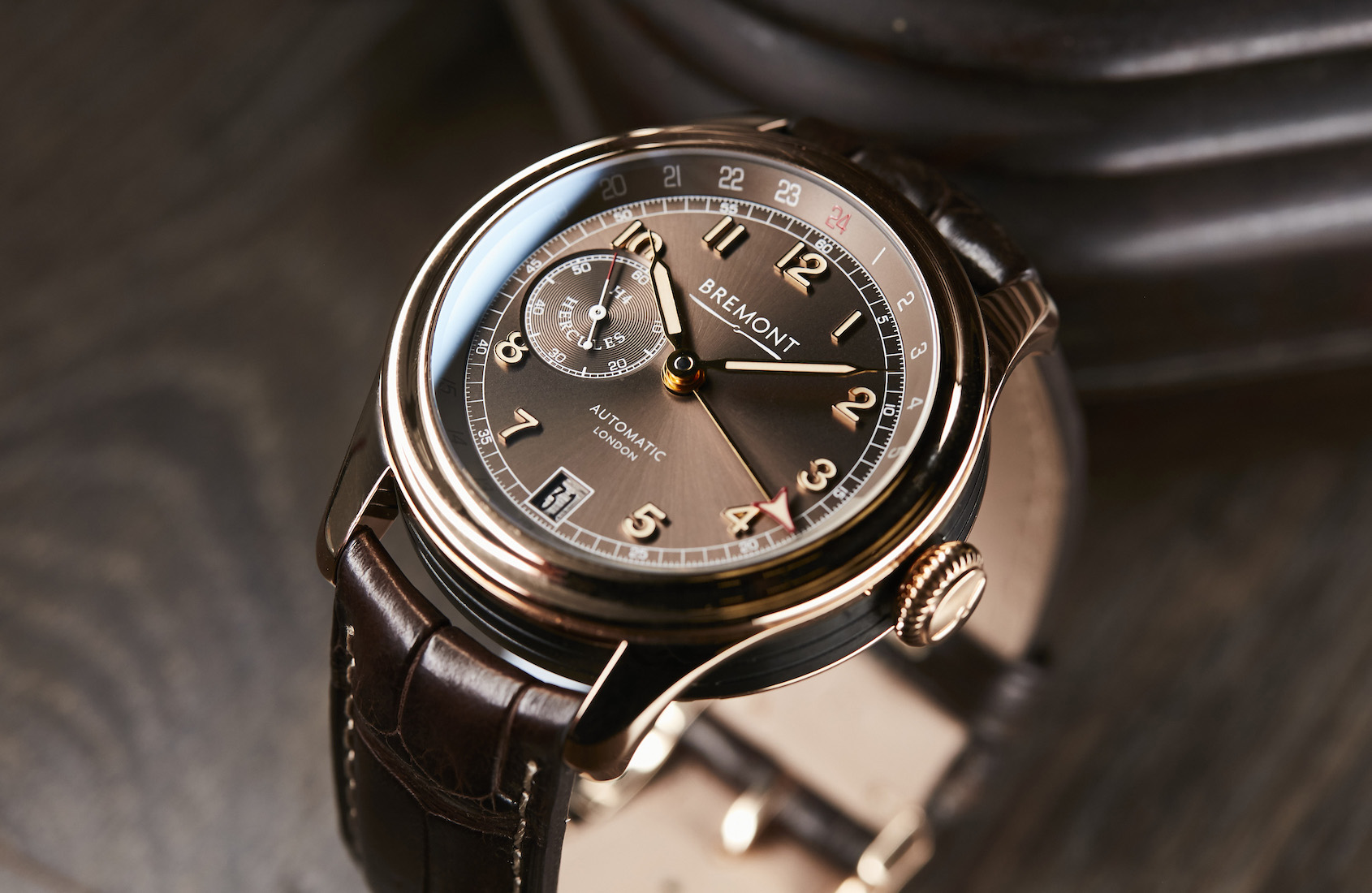 It is challenging to articulate how the H-4 Hercules feels on the wrist without simply saying it feels like an expensive and well-made watch, that also gives the impression of both of those things. The 43mm case feels large, but it also feels balanced and proportionate to its weight and the strap that it arrives on. I personally prefer watches on the smaller size (sub-40mm ideally), but for a reason I can’t quite put my finger on, the H-4 was comfortable in a way that other large watches I have worn haven’t been. 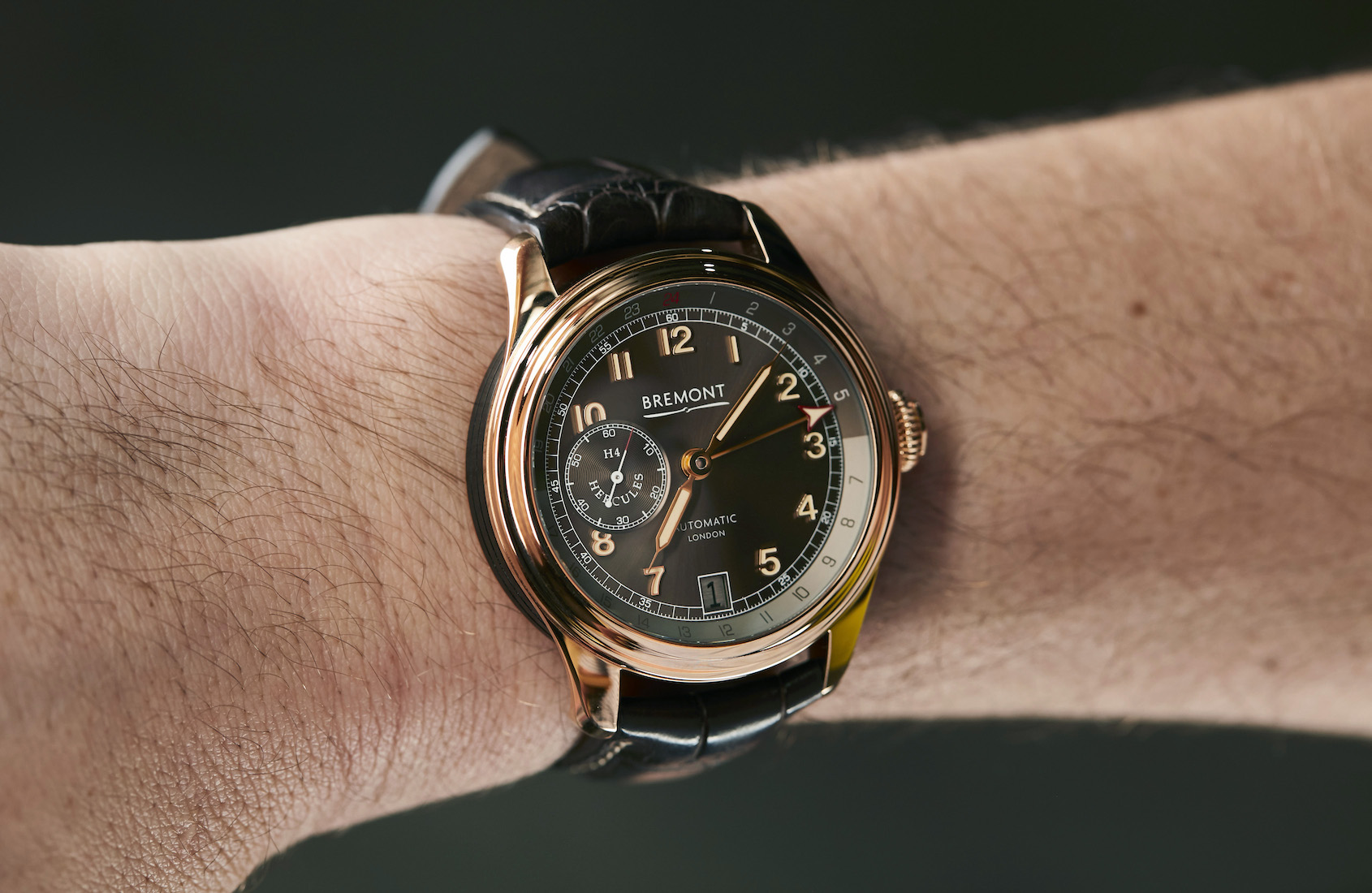 If you haven’t been able to tell so far, I like this watch. The historical connection is very interesting, and it’s certainly hard to have a self-esteem issue with a 43mm rose gold watch on your wrist. While it would be a little large for me to wear every single day, I wouldn’t have a challenge adding this to a rotation with a few other watches. 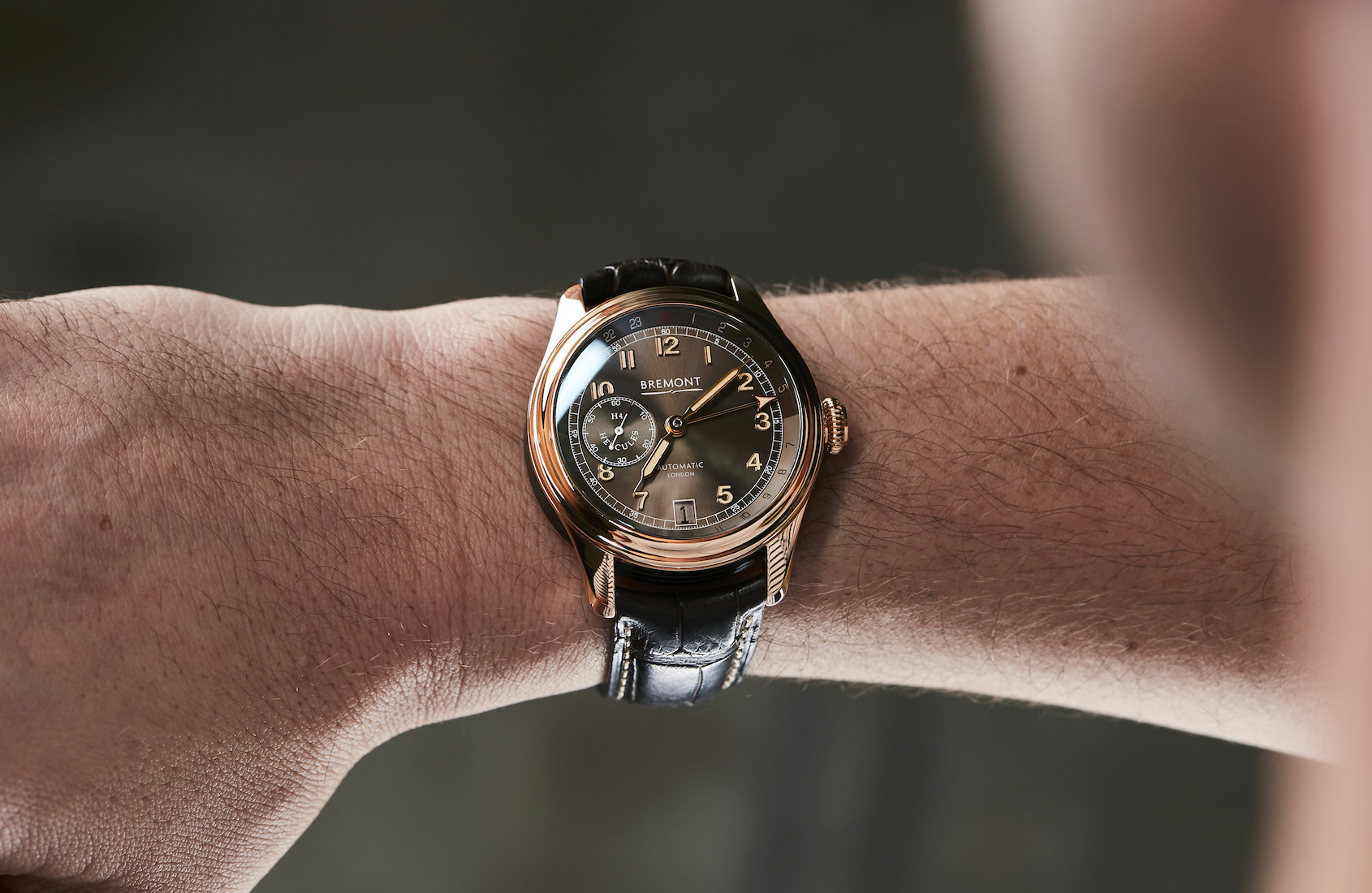 Aviation lovers, history lovers, and anyone who loves a gold watch on their wrist.

While the H-4 Hercules definitely derives some of its power from the size of the case, I’d be interested to see if the feeling translated into a smaller case size. 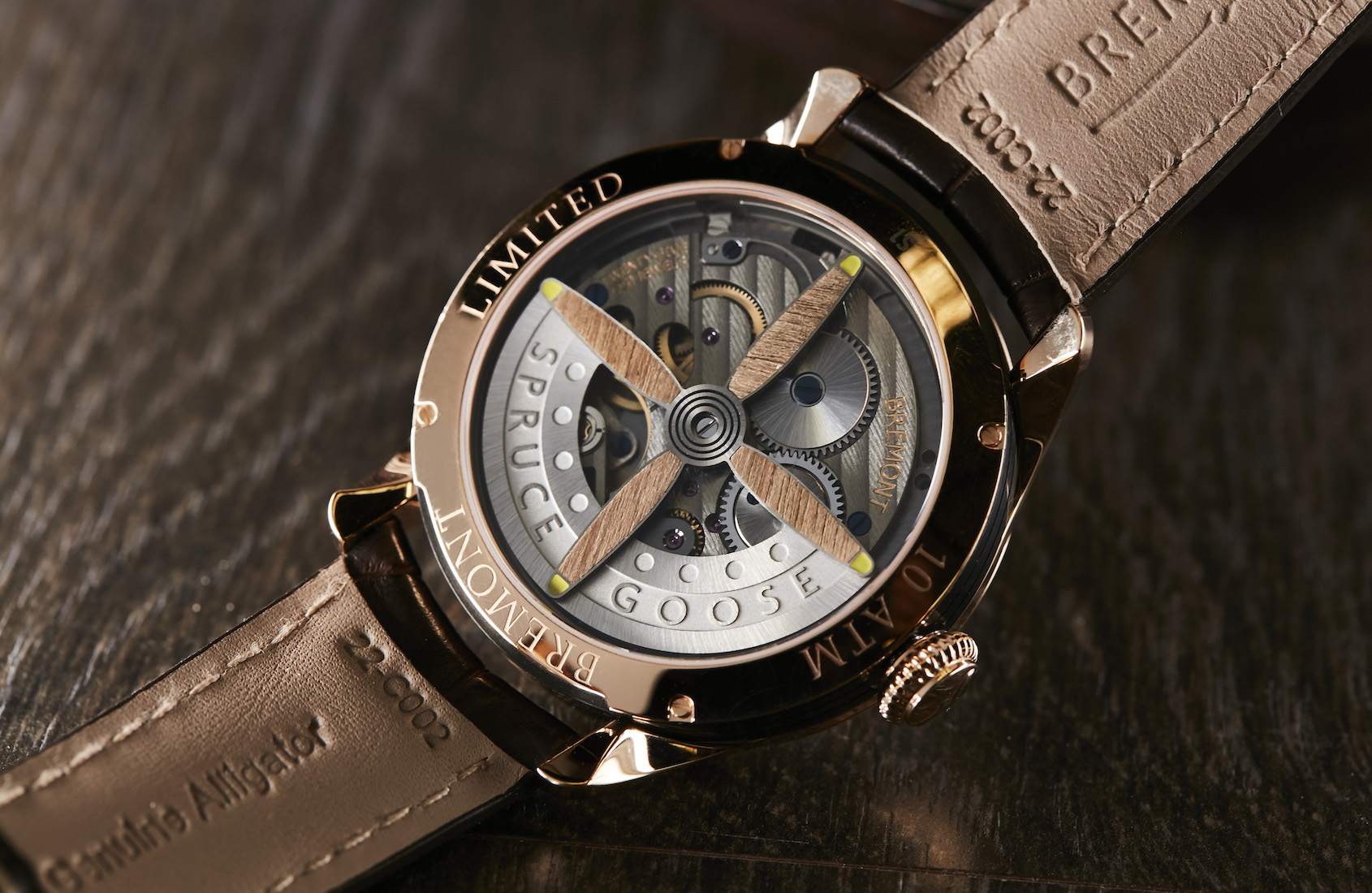 Bremont H-4 Hercules in Rose gold has an Australian RRP of $31,995, and is available from Bremont’s Melbourne boutique.

Made in partnership with Bremont. However, the opinions expressed in this article are our own in accordance with our Editorial Policy.