TAG Heuer has once again dipped into their enviable back catalogue, and come up with one of their best reissues in years – the Monza CR2080. 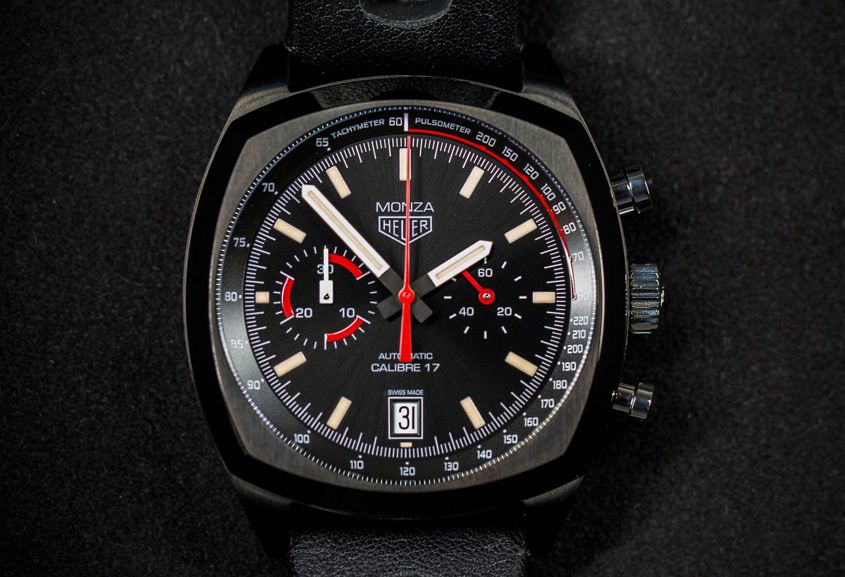 In 1975, a legend was born. Niki Lauda won his first Formula One driving title. This marked the coming together of three greats – Lauda’s skill, Ferrari’s cars and Heuer’s timekeeping. The track where it all went down? The Autodromo Nazionale in Monza, home of the Italian Grand Prix. In 1976, Heuer celebrated this milestone with the release of the original Monza, taking the Carrera case but giving it a mean black and red makeover. Then, 20-odd years later, TAG Heuer reintroduced the Monza into the line-up, this time in a distinctive, cushion-shaped case, inspired by a chronograph from the ‘30s (discover more of the Monza’s history here). This year sees these two distinct designs come together in the limited edition 40th anniversary Monza. Let’s just say it’s a winning combo. 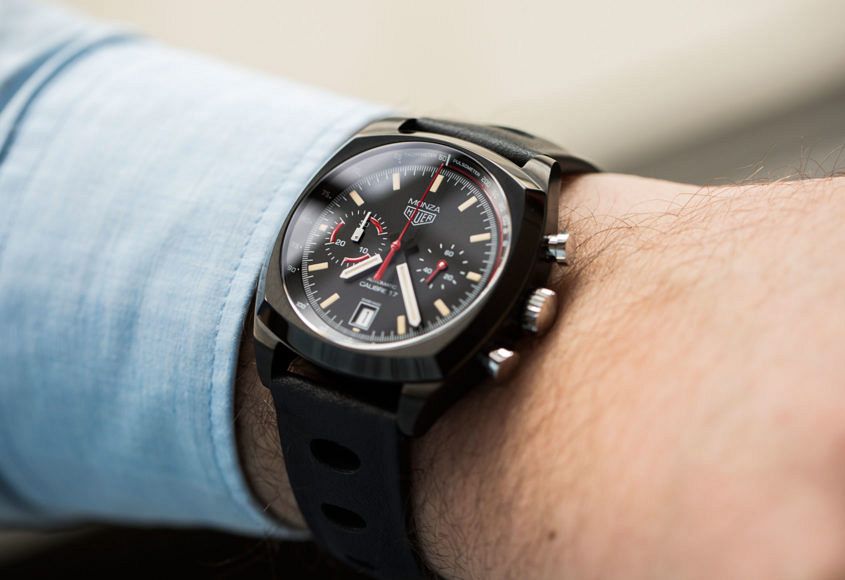 Key to the Monza’s instantly recognisable, cult status is the case. First of all – the shape. The Monza has a blocky, almost squared off tonneau shape. Already this uncommon case shape helps the Monza stand out from the overwhelmingly round crowd, without being quite so angular as a square watch (we’ll leave that to the Monaco). It’s also a super ‘70s style, which is perfectly fitting given the watches history. Size-wise the titanium case is 42mm across, a major increase from the previous Monza (first released in 2000), which came in at 38mm. This size might not seem huge for a sports chronograph, but it’s in line with the retro reissue vibe, but the cushiony shape makes the Monza wear large on the wrist. Aside from the shape, the other defining feature of the CR2080 (as it’s formally known) is the black case. Heuer led the way with black watches, not just with the Monza, but also the infamous Monaco ‘Dark Lord’, and it’s something the brand continues to excel at today. This Monza has been given a tough titanium carbide coating, to minimise the chances of scratches. Oh, and we love that the crown and pushers have been left in untreated stainless, just like the original. 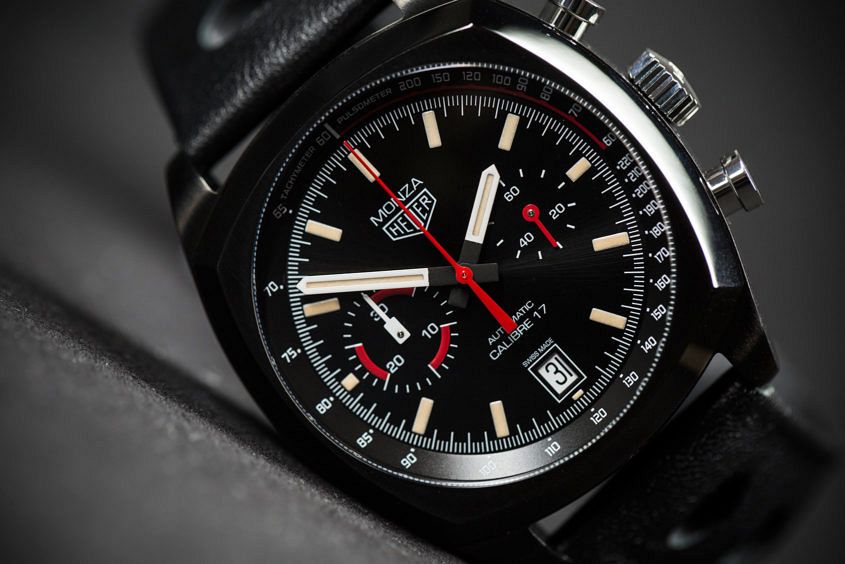 Complementing the black case is this pitch-perfect take on a heritage Heuer. It’s almost a carbon copy of the 1976 original, with the same typeface and layout, and the same white and black details. The luminous markers are in a faux-patina cream, an effect that can come across as overdone, but thankfully TAG Heuer has pulled it off sensitively here. Oh, and before the purists start getting up in arms about the date window, it’s pretty much exactly the same as the original (except for the Swiss-made) text. 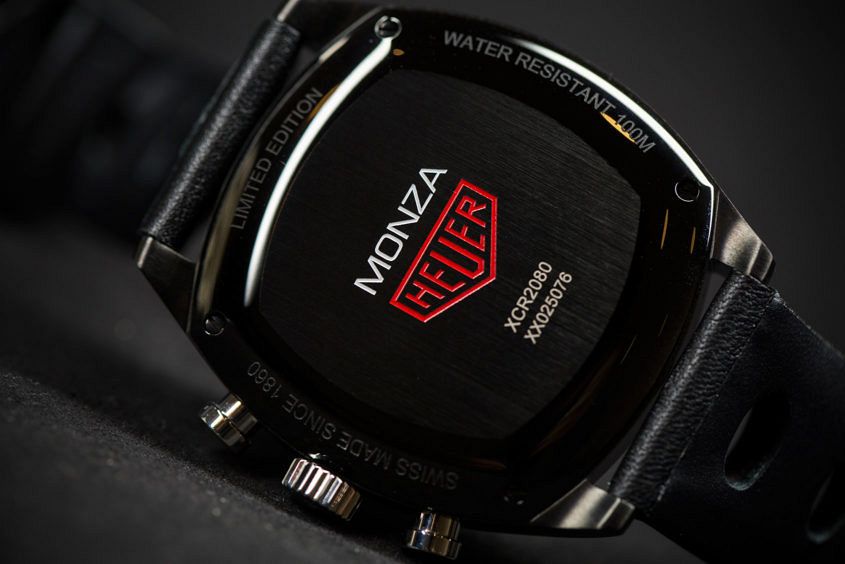 Hidden away behind the blacked-out caseback is the automatic Calibre 17 movement – a modular chronograph on top of an ETA 2894-2. It might not be as exciting as the Heuer-01 movement, but it’s a solid choice, especially given the solid back.

In another smart touch, TAG Heuer has used a large holed (AKA rally-style) calfskin strap on this watch, one of the most iconic ‘70s strap styles. It strikes the right blend of business and casual, but if you were inclined to mix it up, the Monza would look amazing on contrasting colour straps – mid-brown, tan and even red would suit it well. 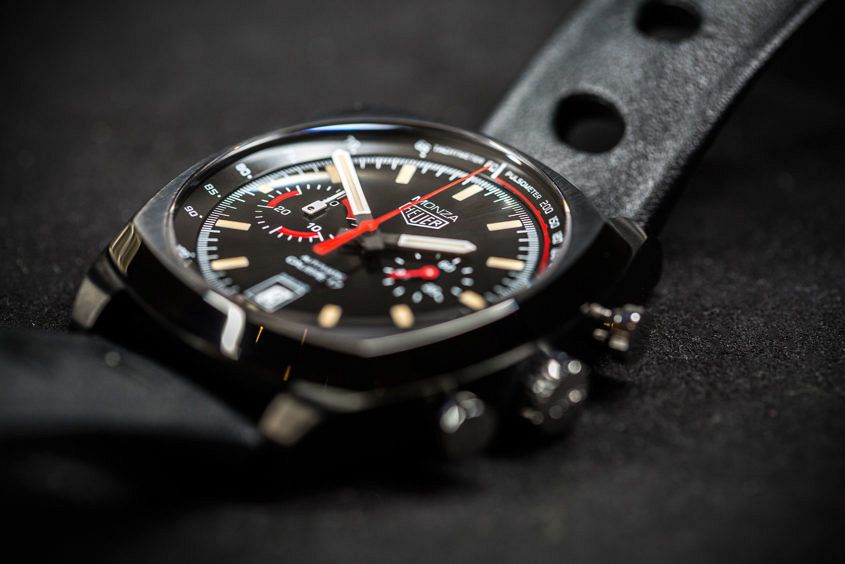 I’m a big fan of this watch. In fact, everyone on the Time Tide team thinks it’s hot – when we shot it in Basel, our photographer did not want to take it off and Andrew really, ah, waxed lyrical in the live review he did. And there’s a good reason for this: The Monza is a reissue (one of this year’s highlights) worthy of a thousand fire emjois, that mashes up the best bits of the ’76 original with the 2000 release. And what’s more TAG Heuer has managed to do it in a way that is fresh and exciting, without being faddish. The Monza will please the hard-core Heuer collectors as much as it will someone who’s casually browsing the boutique for a nice everyday watch. TAG Heuer is a mega-company with everything from A-list celeb tie-ins to smartwatches, and it’s good to see that amidst all the hype and noise, they haven’t forgotten their heritage.

Did you see the movie Rush…

If your heart is in vintage Heuer, but your head is in modern times, and case sizes – this is the watch for you.

Honestly, everything is about right on this watch, but I can’t just cop out and say “make it a regular production piece”…actually yes I can. There is nothing I would change on this watch.