Since we posted the Jack Heuer ‘Times of My Life“ video on the weekend we’ve had several Instagram comments and emails enquiring about the ‘Solunar’ model that appears early in the film. The artful, attractive piece has an interesting significance for Jack (his father Charles Edouard commissioned the piece to be designed by Jack’s physics teacher!) and it epitomises all that is unique about original Heuer watches: the attention to colour, detail and design paired with the functionality of a piece, that in this case, could tell the tide as well as the time. In fact, if we ever had to choose a mascot, this timepiece would be a contender. For this poetic twist, as well as your interest, we’ve decided to seek the best article on the net about the Solunar and repost for your reading pleasure. We didn’t have to go far. The following is written by our very own DC back in March, 2013 and posted on his TAG Heuer site Calibre 11. If you love TH and Heuer and you haven’t heard of it, then you don’t really love TH and Heuer. We hope you enjoy this comprehensive and visually stunning story that explores history, design and how it works.

When you think about vintage Heuer watches from the 1970s, they generally fall into one of two categories: One of the “Big Three” (Monaco, Autavia and Carrera), or another Chronograph series powered by Heuer’s Chronomatic Movement (Silverstone, Calculator, Verona, Monza, Skipper to name a few). But this week we have something for you that fits into neither category- the Heuer Solunar. Launched in 1976, the second-generation Solunar (the name being a portmanteau of “Solar” and “Lunar”) is a tool-watch designed to show the time of low and high tides over a 2 week period. The watch was aimed at fishermen, and is a fascinating example of both niche marketing and how a watch can be used for much more than simply telling the time. But before we look too closely at the second-generation Solunar, let’s start with the original- a beautiful watch from the late 1940s. 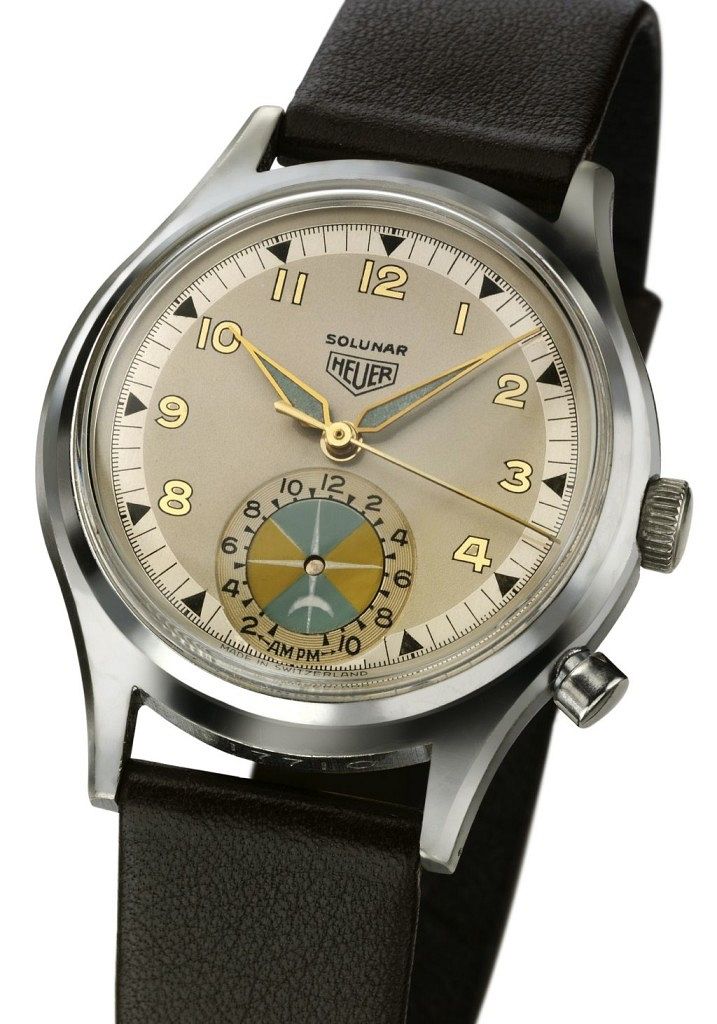 The original Heuer Solunar from the 1940s

Look familiar? Regular readers of Calibre11 will recall seeing this wonderful 1949 Heuer Solunar in Mark Moss’ review of Heuer’s history in the 1930s and 1940s. Mark recounts the story of the origins of the Solunar: “This was introduced at the instigation of Abercrombie & Fitch, the US sporting goods retailer, who would develop a strong relationship with Heuer in this post-war period. Their managing director informed Charles-Edouard Heuer of the demand for a tide watch from fishermen, but the necessary calculations for displaying tides were performed with the help of Charles-Edouard’s son’s physics teacher! The name of said son? Jack Heuer….” The success of the Solunar led to a Chronograph version of the tide watch, called the Heuer Mareograph.While the Mareograph range continued intermittently through to the 1970s, the Solunar disappeared from the Heuer range until being revived in a very different form. 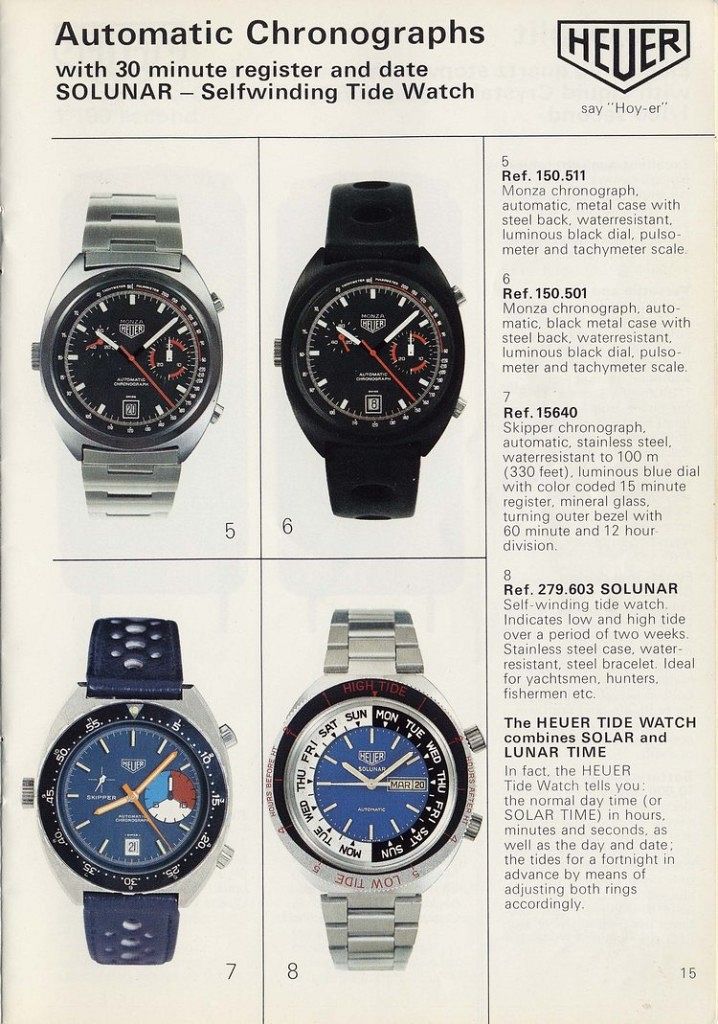 Arriving in 1976, the Solunar was somewhat of an oddity in the Heuer Catalogue (shown in the 1977 Catalogue above), with its large (45mm) stainless steel case, dual-crown, Day-date window at 3 o’clock and lack of Chronograph complication. The watch only came in one colour- a bold blue, which in reality is darker than the catalogue would indicate (see below).

While there were other Tide watches on the market, Heuer kept to the ethos of the brand at the time and launched a tide watch with an automatic movement.

The design of the Solunar is dominated by the large external Black and Silver bezel and the internal two-week Black and White disc. These take up most of the “face” real estate, leaving the Blue dial itself looking quite small. The hands are in keeping with the design used on other contemporary models, helping to give the Solunar a Heuer- family appearance. 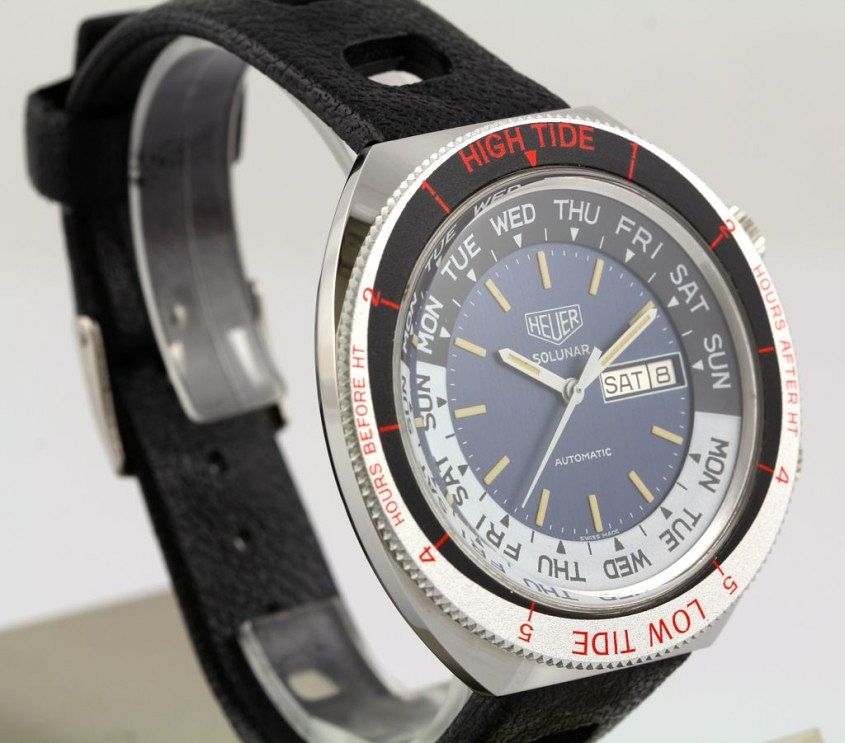 Like the Calculator, the Black colour and text on the bezel is printed on a Silver base, rather than having an aluminium/ steel insert. 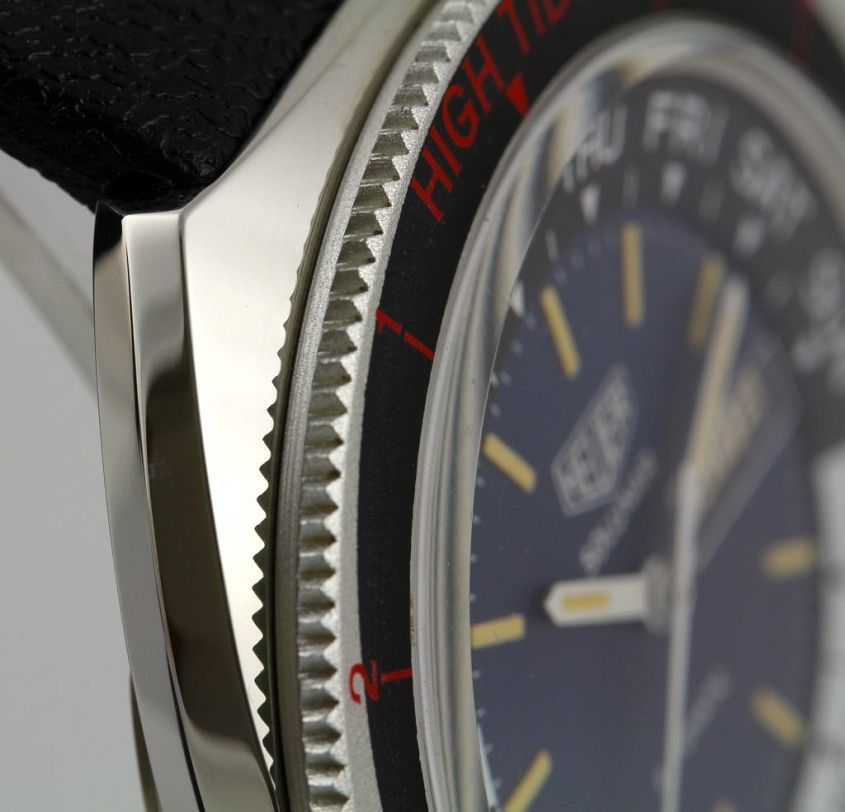 The case itself has a high-shine polished finish, which works well with the matte silver of the bezel. 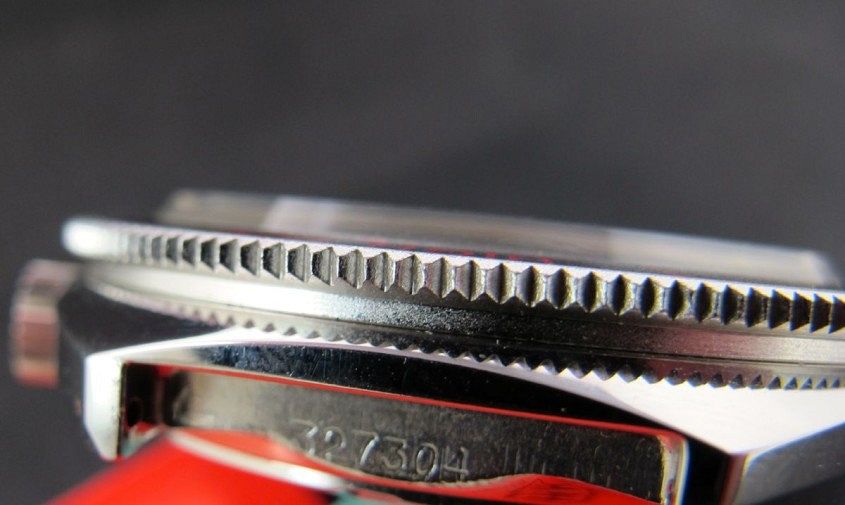 Topping off the watch is a domed plexi crystal- again, similar to the design used on the Heuer Calculator. While the watch was available with a bracelet, it’s more common to see them today mounted on a Tropic strap, which fits well with the outdoor lifestyle targeted by the Solunar.

Powering the Solunar is an ETA 2790-1 movement, a Calibre that like the Solunar itself, was only produced for a few years between 1976 and 1980. It marks one of the first times that Heuer used an “ETA” branded movement, rather than movements from other brands in the ETA family, such as Valjoux and Landeron. 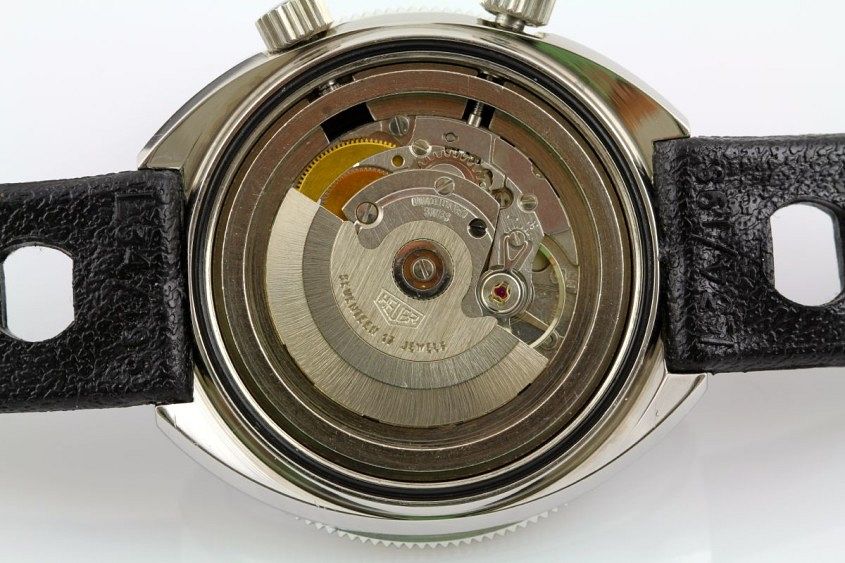 It’s an interesting calibre, offering not only a day-date function, but also boasting a dual-language option for the day disc (see below). 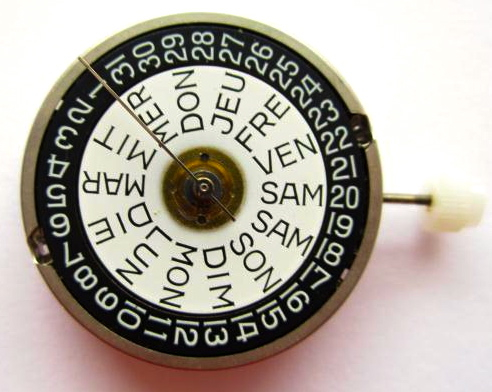 One of the characteristics of large cases like the Solunar is that the movement requires the use of a spacer to help fill out the space inside the case.

So, given that the Solunar has a conventional 3-hand movement, how does it indicate high and low tide? The answer lies in the combination of the internal two-week disc and the outer-bezel.

1. Two-Week Disc OK, a few basics first….bear with me. As you may know, tides are created by the gravitational pull between the earth and the moon. The timing of high tide is driven by two factors- the rotation of the earth (one rotation every 24 hours) and the moon rotating around the earth (once every ~28 Days). If the moon didn’t move, then high tide would be the same time every day, but life is not that easy. Given that we have two moving objects, the time of high tide moves each day by (1/28 X 24)= 51.5 minutes (approx.). Now take a look at the bezel- we have 14 days marked over a 12-hour dial. Applying a little more maths: (12 hours/ 14 days) X 60 minutes = 51.42 minutes between each triangular marker..pretty close to the 51.5 minutes calculated above (let’s be honest- being a few seconds late or early for high tide is unlikely to change whether the fish are biting). OK, so now that we know why the day markers are spaced ~51 minutes apart, how do you use the inner disc? Let’s say that your fishing holiday starts on a Monday. Simply wait until the exact time of high tide (10.10 as shown above) and then line up the hour hand with Monday…and that’s it. You now have the daily time of high-tide for the next two weeks. This is helpful, but high tide doesn’t only occur once a day- it occurs twice. So that’s why we need a second scale.

2. Outer Bezel The outer bezel is also cleverly designed. It shows that there is approximately 6 hours between high and low tide, and therefore 12 hours between high tides. Simply moving the Red triangle on the bezel to the time of High time (recall: 10.10 in the example shown) now gives you the daily ebb and flow of the tides.

While the Heuer Solunar is a pretty cool watch and exceptionally rare, its scarcity doesn’t translate into high prices with even the best examples selling for around US $2,500. 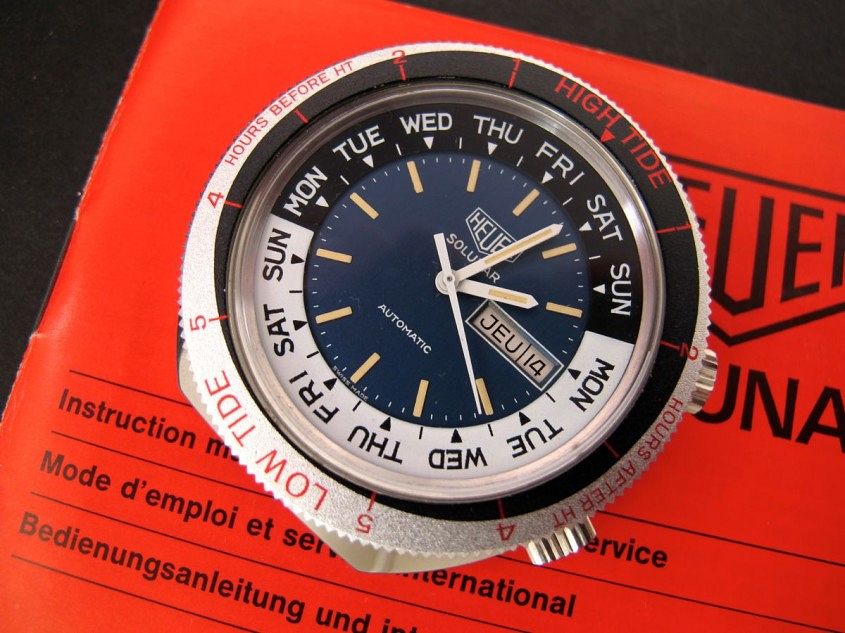 Many watches that you’ll see for sale are missing the external bezel, and it’s common to see pitting/ discoloration on the blue dial. Despite its niche status, the Solunar is one of the more interesting 1970s Heuers, both from a design and a functional perspective. In many ways the Solunar is the partner watch to the Heuer Calculator, both watches that use their bezels to perform a range of calculations. While the Solunar appears complex at first glance, a little practice will make sure that missing the high tide is not the excuse for returning home fishless. 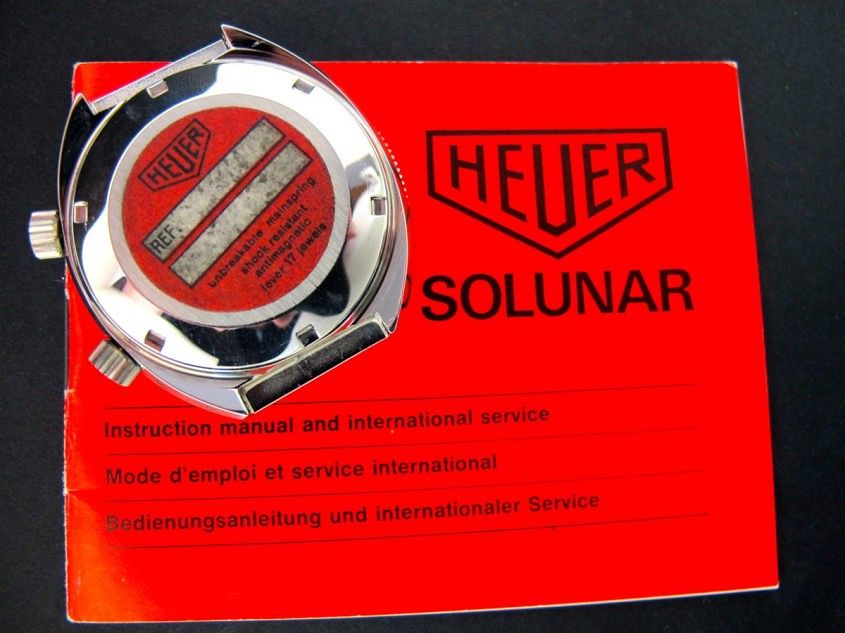