When Time+Tide last looked at a Hublot Big Bang Sang Bleu II, we described it as a “geometric ice palace” for the wrist. Well, the three new Sang Bleu II ceramic editions – coming in grey, blue and white – contain one colour that not only doubles down on that idea but also answers the question “what watch would Superman’s dad Jor-El have worn inside the Fortress of Solitude?” 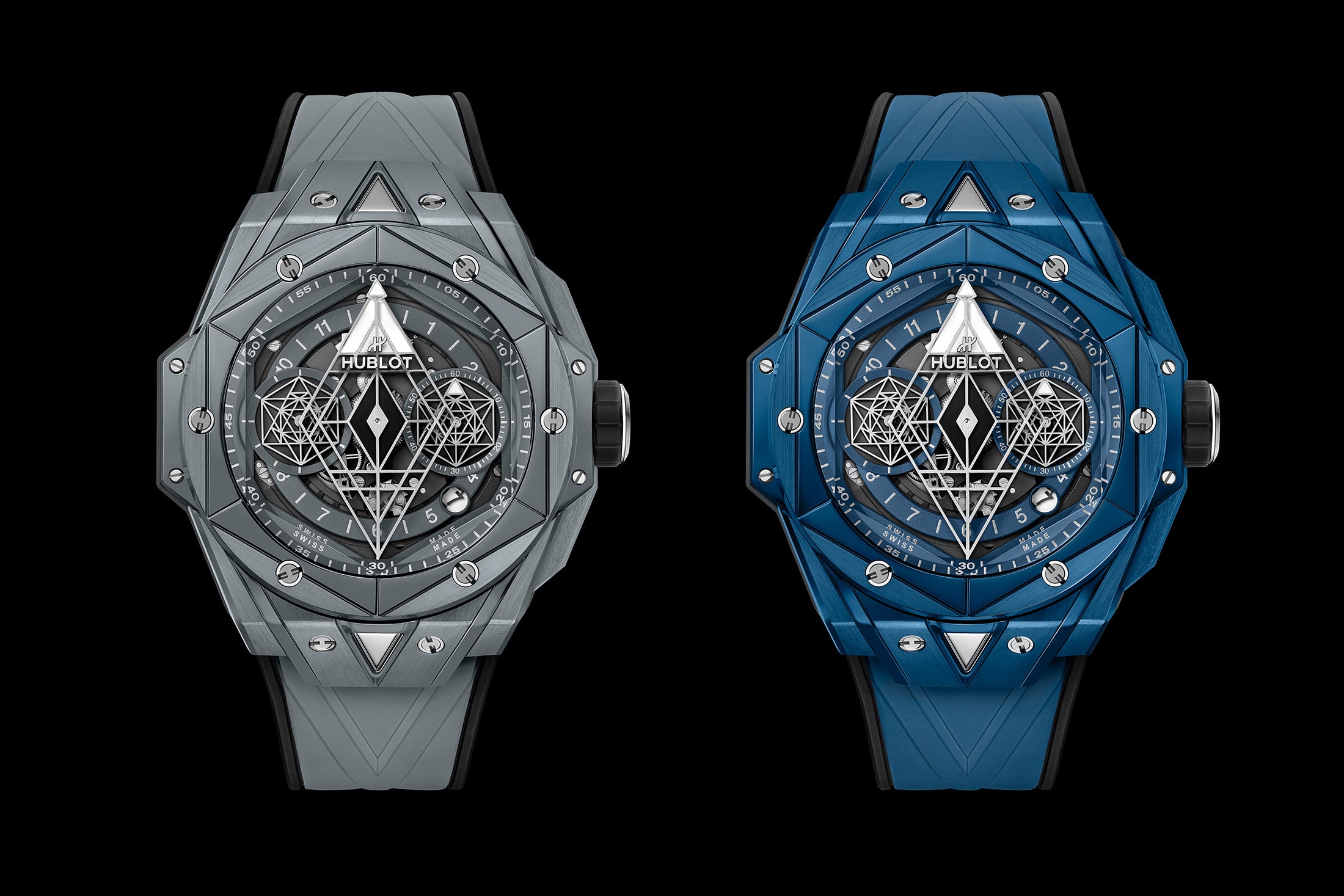 Under its creative director, tattooist Maxime Plescia-Büchi, Sang Bleu is a creative agency involved in a dizzying range of disciplines, from body art to typefaces, fine art to media, logo design to artist collaborations. Its work with Hublot is in its sixth year, with fruitful results built around an utterly distinctive structure that layers geometric shapes from case to skeletonised dial and yet maintains a deeply impressive equilibrium. 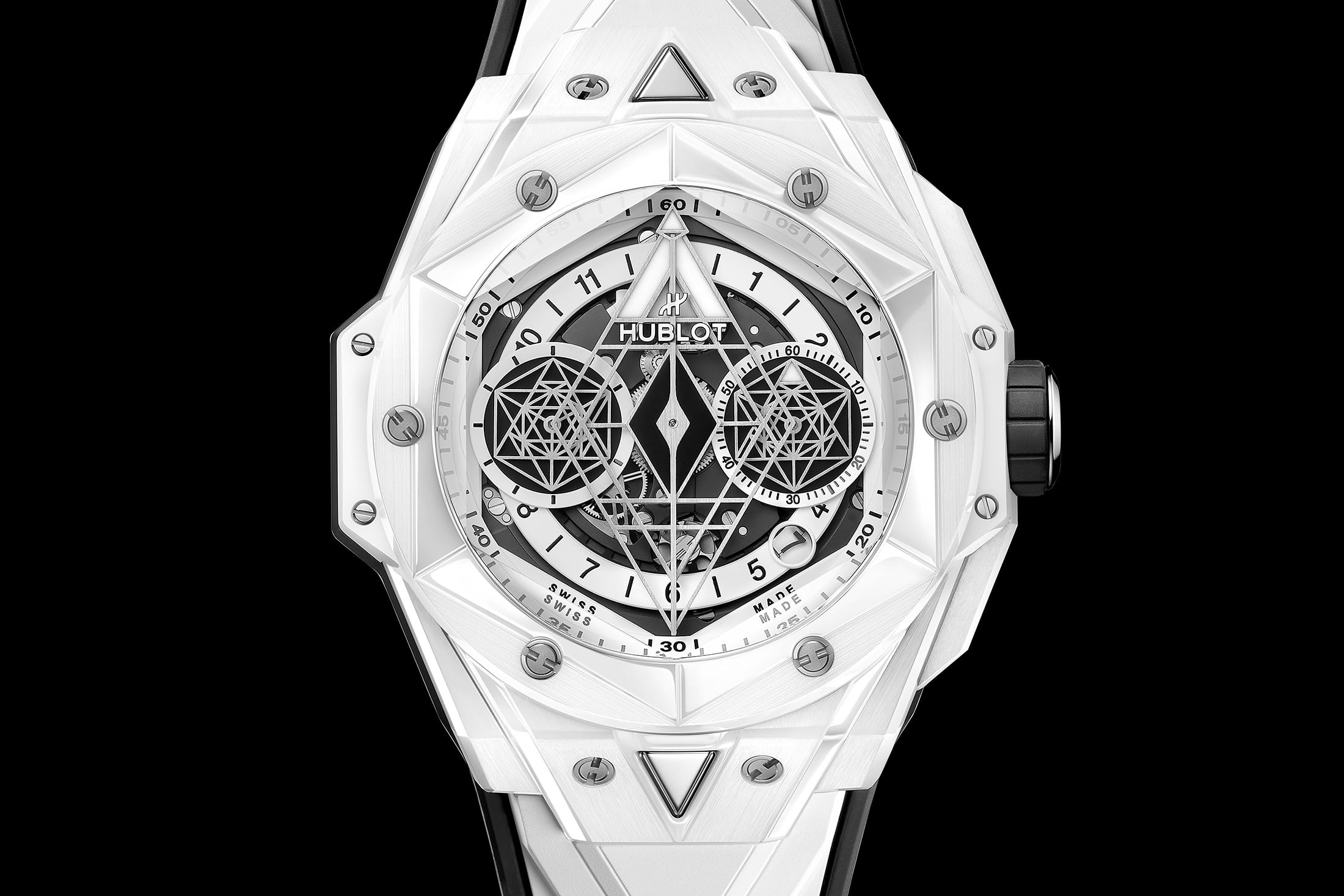 The Sang Bleu II is also a flyback chronograph, using the in-house HUB1240.MXM movement with a 72-hour power reserve, and the overall design displays the time in a way that forces you to take in the details.

You glance at the hour but end up lost in a fruitless count of exactly how many shapes are in there. And then you realise you haven’t counted the ones on the rubber strap.

These new grey, blue and white editions – with the ceramic polished and satin-finished – are reminiscent of similar colourways released earlier this year for the Big Bang Integral Ceramic. Most everything else is very much its own thing, however. 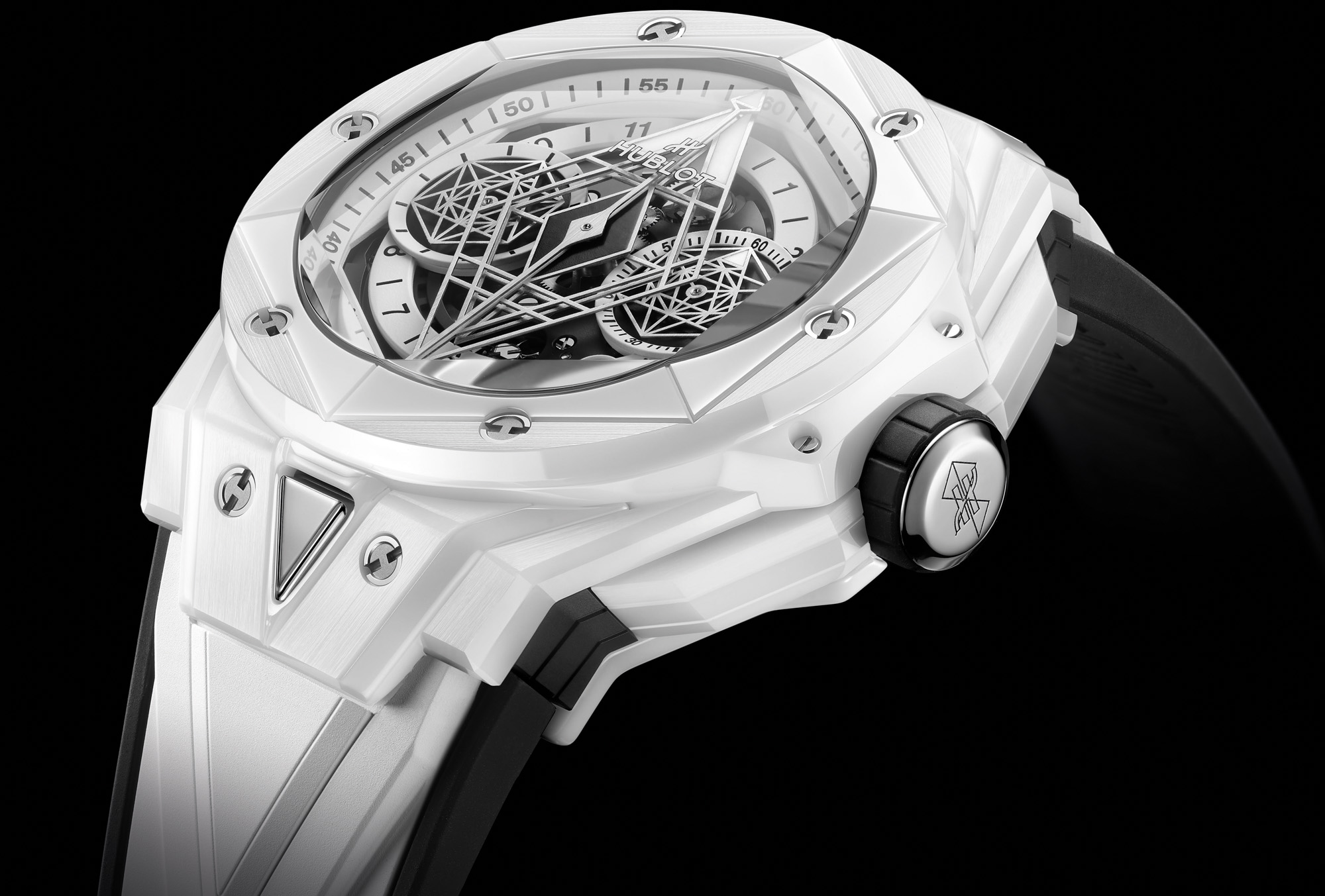 At 45mm in diameter and a chunky 16.5mm thick, it’s hard to call these watches understated, and the industrial hue of the grey version gives the sense of a construction rising from the wrist.

Most attractive is the blue, perhaps because it most clearly echoes the body art origins of Sang Bleu. The phrase translates from French as “blue blood”, and while Hublot says it echoes the linked notion of “royal blue” the colour has an inkiness to it that really brings home the idea of these watches being designed in such a way as to be akin to a three-dimensional tattoo. 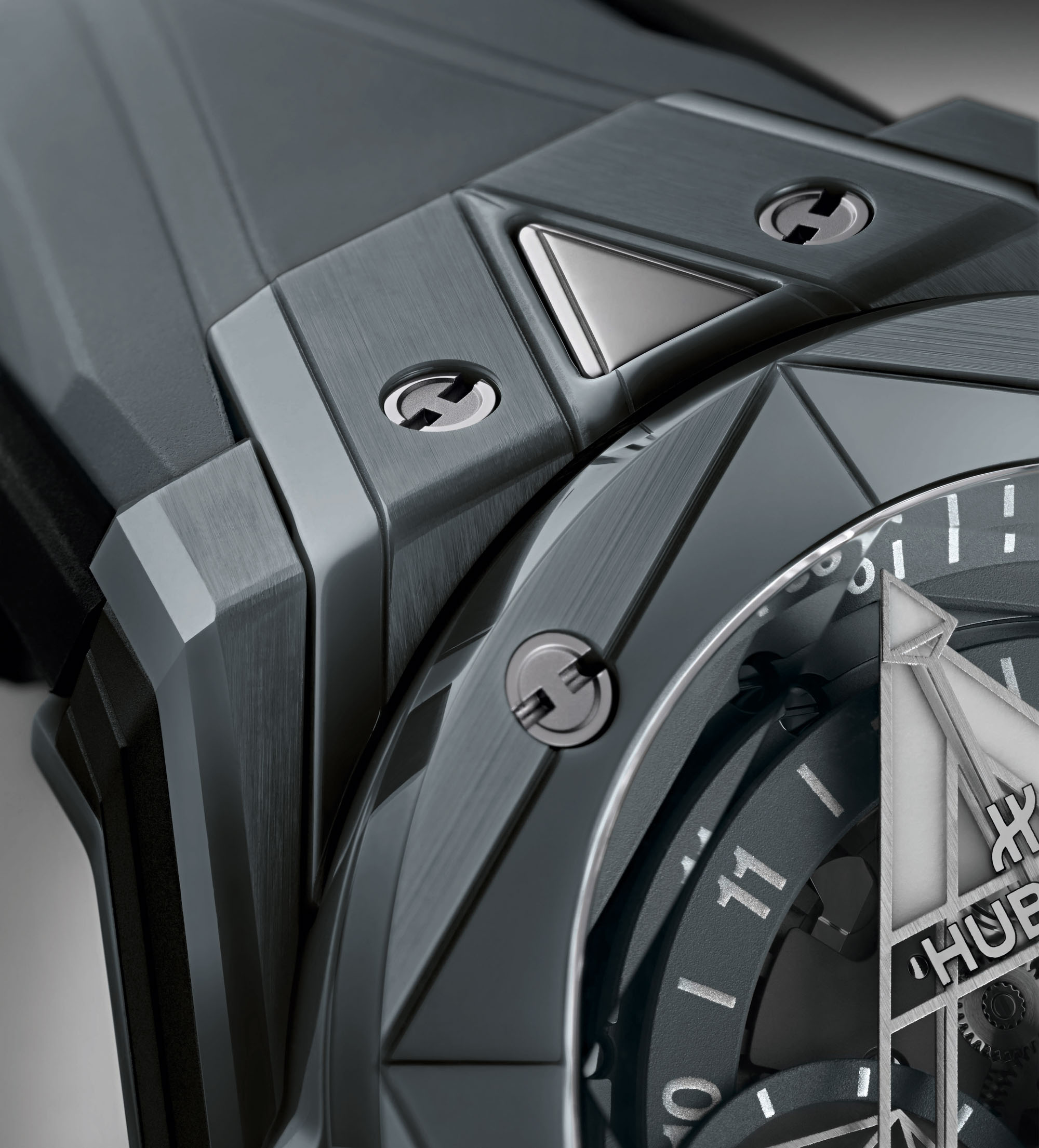 Finally there is the white version, where the angles, steps and geometry of the case are most emphasised. This is where you find yourself thinking of Marlon Brando, standing in the Fortress in Solitude in that so-white-it-hurts outfit. The actor famously wore a very different watch, but you could imagine Jor-El grabbing this Hublot after spotting it emerge fully-formed from one of the crystals jutting through the icy floor. 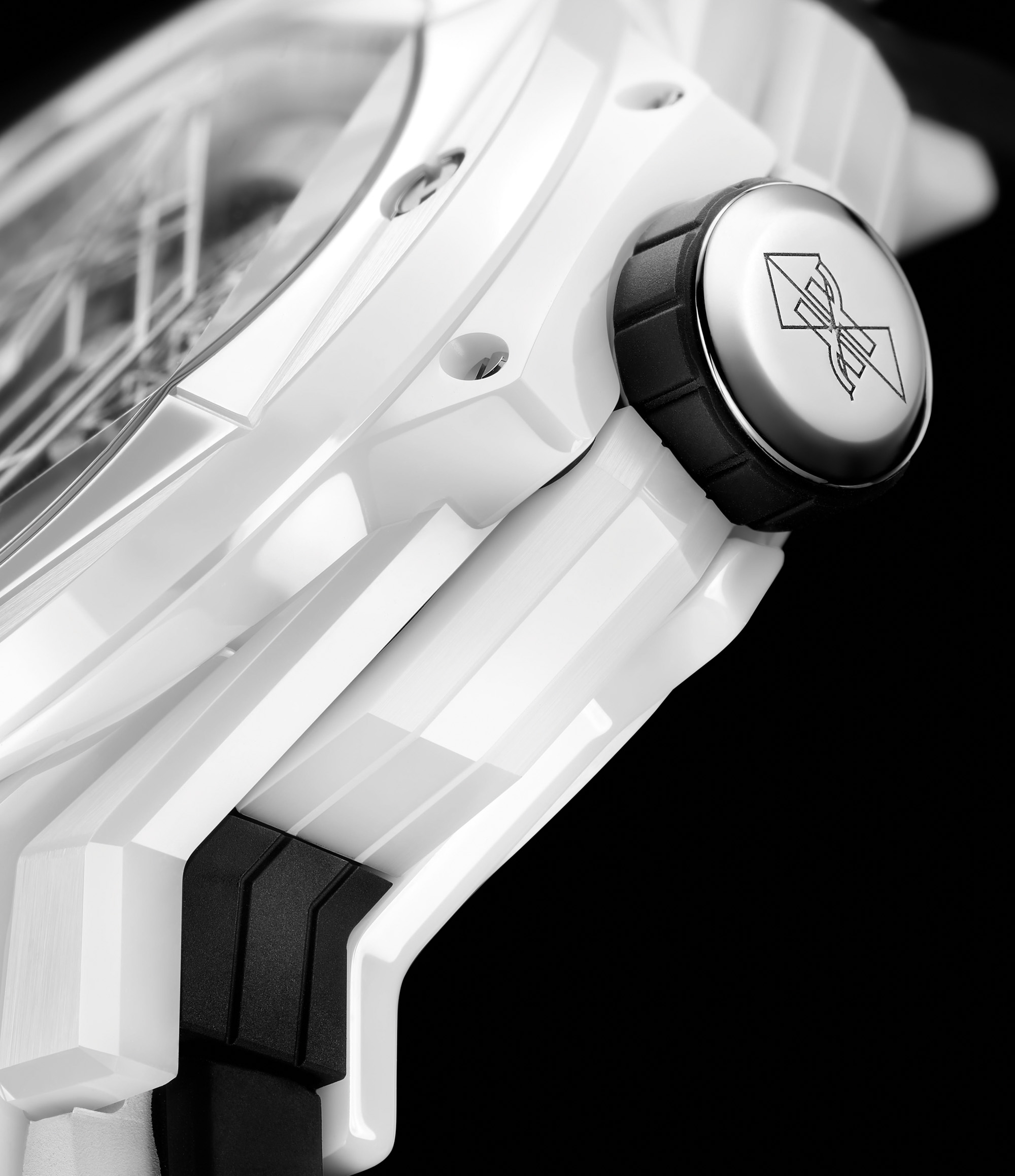 Hublot Big Bang Sang Bleu II: A Trio in Ceramic are each limited to 200 pieces and cost CHF25,900.