Ronald Chew (aka Horologym) is a watch collector based in Singapore. But he’s also one of the few people in the world who has managed to beat the queues and the flippers to assemble a complete set of the MoonSwatch. What makes this achievement even more impressive is that Ronald didn’t spend big on the secondary market to pull it off. In fact, every single one of the 11 watches was bought at retail price. In this interview, he explains how he did it. 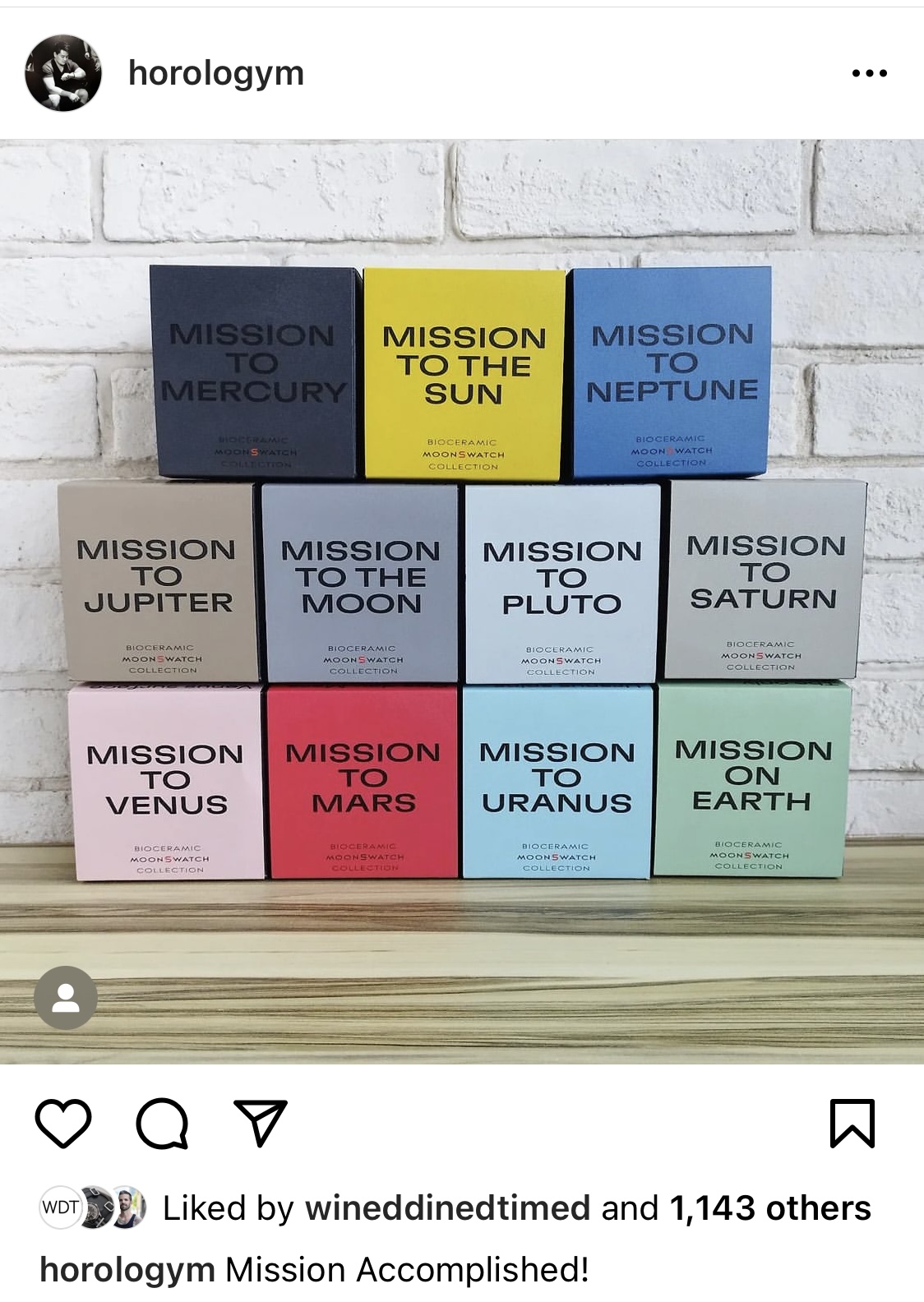 T+T: Before we get onto the MoonSwatch, can you tell us a bit about your watch collection?

Ronald Chew: I’m a personal trainer, so seven days a week, I’m in the gym. As a result, my collection is largely made up of sports watches like my Tudor FXD and Rolex Sub that can take a beating.  I mean, I do like horology, too, but those watches don’t suit my daily lifestyle and my profession.  I’m the total opposite of somebody who works nine to five in an office – my Cartier Tank and my Reverso are my weekend watches.

T+T: So when the MoonSwatch launched back in March, what was your first reaction?

RC: I Ioved it right away. I really liked the colorways but also, as a Moon Watch owner, I loved what Swatch and Omega had done. To me, the MoonSwatch collaboration introduced watches to a broader audience who were not already in this hobby. For example, lots of my friends who aren’t that into watches started texting me on WhatsApp asking me what the MoonSwatch was all about. So I instantly fell in love with the watches, but I also felt like it was a really good marketing strategy. 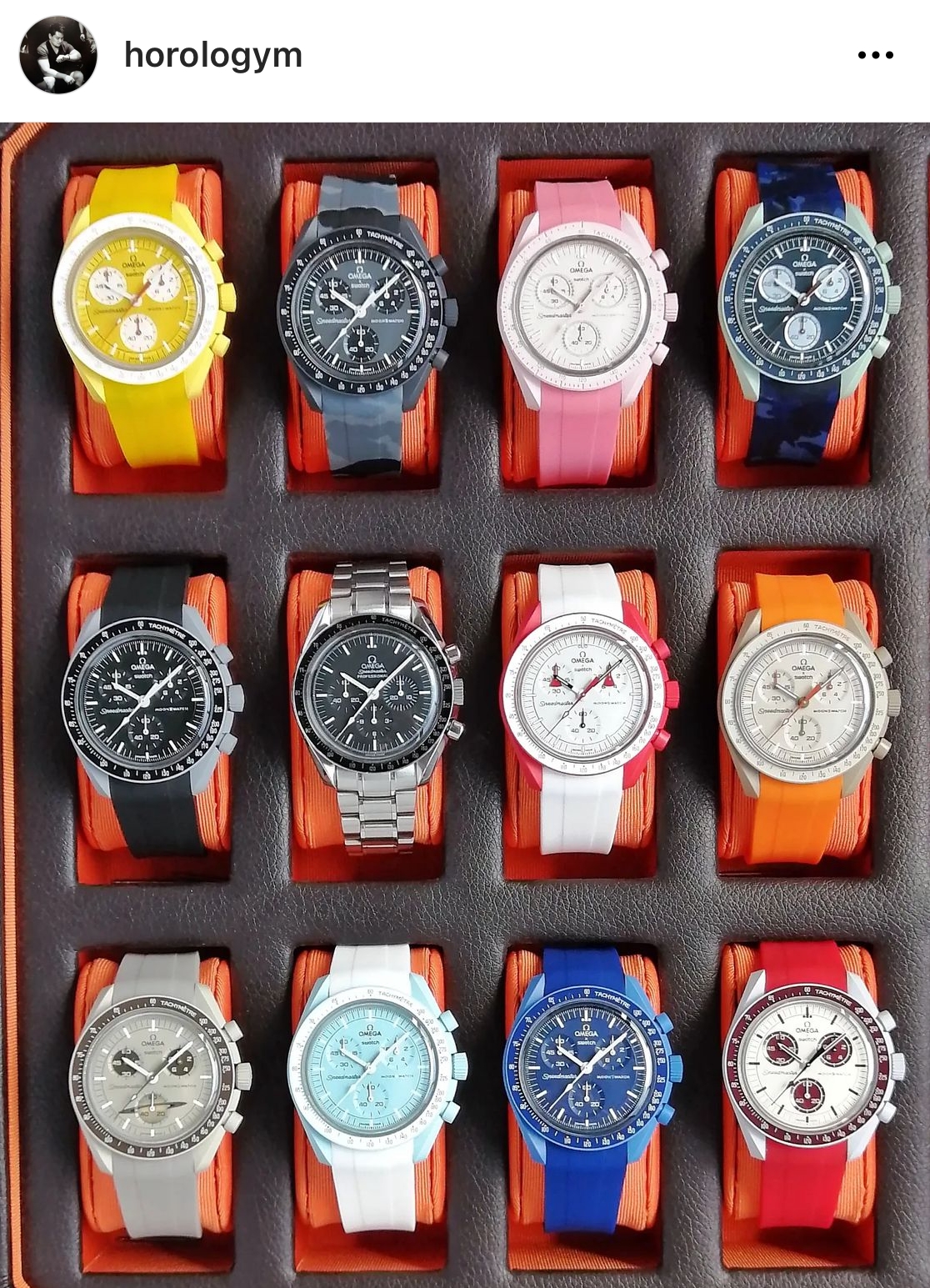 T+T:  Yes, given they cost just $380 AUD a pop, it felt like the MoonSwatch made watch collecting accessible to everyone. So when the watches first dropped, did you queue up in Singapore?

RC: Yes, I queued up on the first day. The store opened at 10am and I was in line by 6am, but there were already hundreds of people ahead of me. At about 8.30am, there was an announcement from the brand manager that there were not enough to go around and that we should disperse. My friends and I decided to go for breakfast as I knew I didn’t have the chance to land a piece. But patience pays off.

T+T:  Was there a particular piece that you had your eye on?

RC: Yes, the Mission To Mars. It’s the tribute to the Alaska Project and the only piece in the collection with the luminous sub-dial hands. 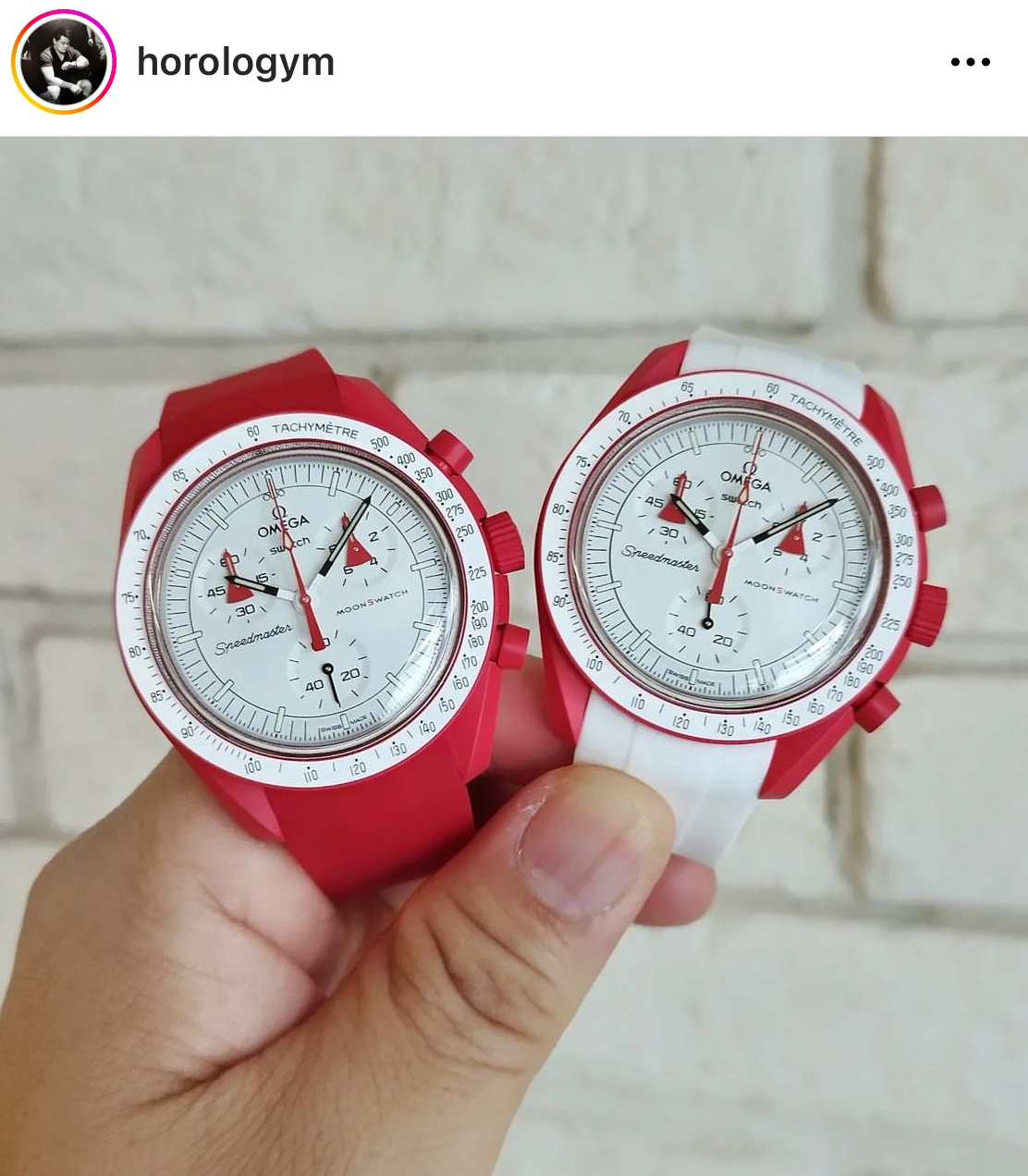 T+T: That seems to be the connoisseur’s pick. At the pre-launch workshop that T+T attended, Robert-Jan Broer from Fratello was there. He’s an Omega obsessive with more than 30 Speedmasters in his personal collection and he picked the Mission to Mars due to the Alaska connection. Anyway, so you missed out on that first day. How did you manage to amass this full set?

RC: All my pieces were bought at retail price. I didn’t pay a single cent more. And that’s basically because I have very nice friends and because I am acquainted with a lot of watch collectors in the community who knew I wanted to collect the whole set.

The first one I got was actually the Mission to the Sun. My friend was in the line that first day and wanted to buy a specific piece. But when he got to the front, the only option left was Mission to the Sun. So he bought it because he didn’t want to waste his time and then offered it to me at retail price.

After that me and my collector friends wanted to make sure that these pieces fell into the right hands rather than people who just wanted to flip them. Because we knew we were competing with the hype beasts and the sneakerheads who were interested in the MoonSwatch, too.

Basically, my friends and I spent the last six months trying to anticipate every new drop. So we’d spend our lunch hours or dinners or even high teas hanging around Swatch boutiques. Whenever we saw more security being drafted in, we’d know there was a good chance of a new drop.

When that happened, a few of us would buy whatever pieces we could and then meet up for lunch and exchange them amongst ourselves or just sell them to each other at cost price. If I was trying to collect alone, I don’t think I could amass all 11 pieces in such a short amount of time. 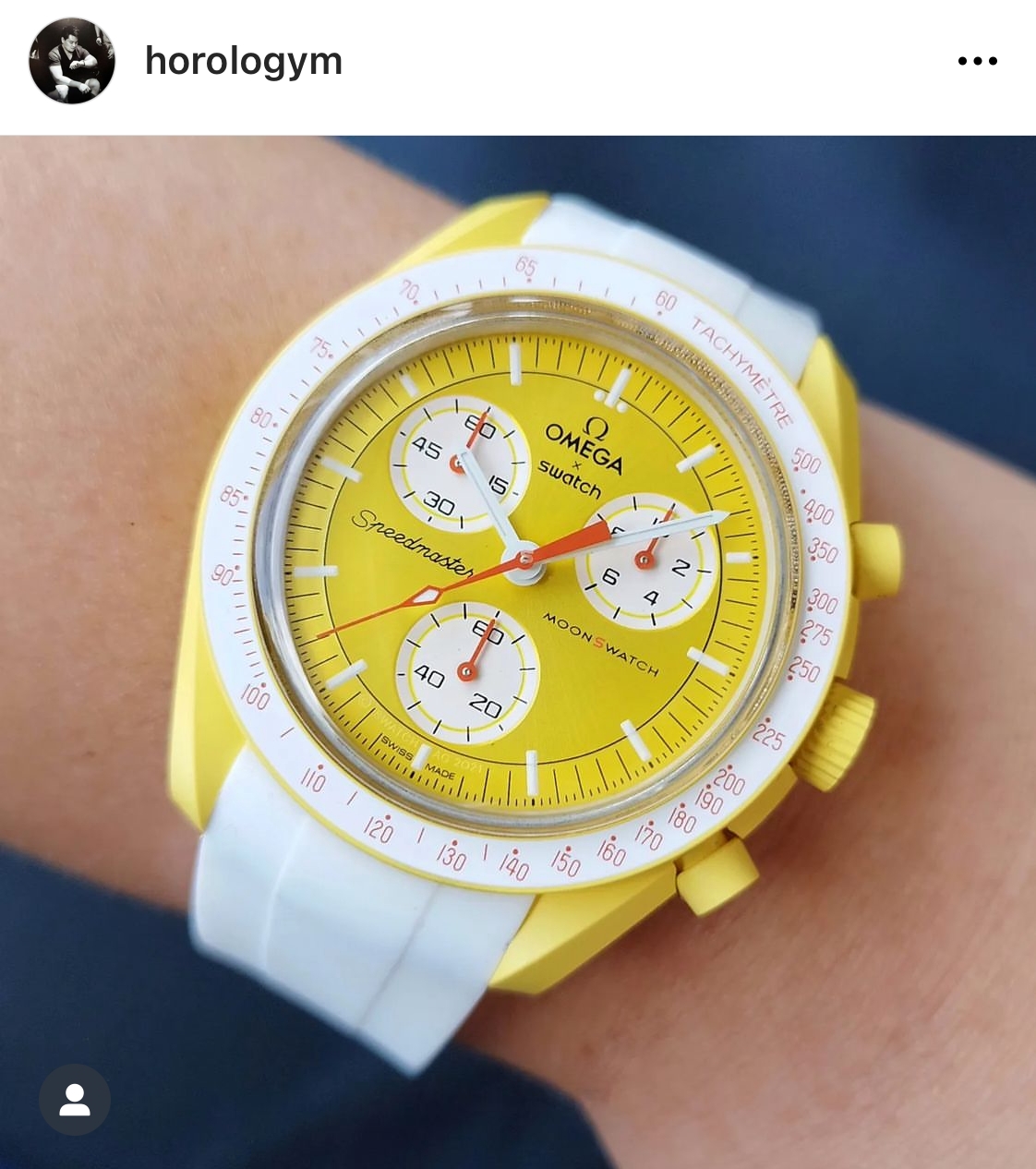 RC: Yes, what I loved about this was that it was an example of the watch community coming together and my friends all trying to help me to get the full set. And I’d do the same for them, too. For example, one day in the Swatch boutique I had the opportunity to buy the Mission to the Moon. I already had that piece, but I got it and passed it on to another friend. 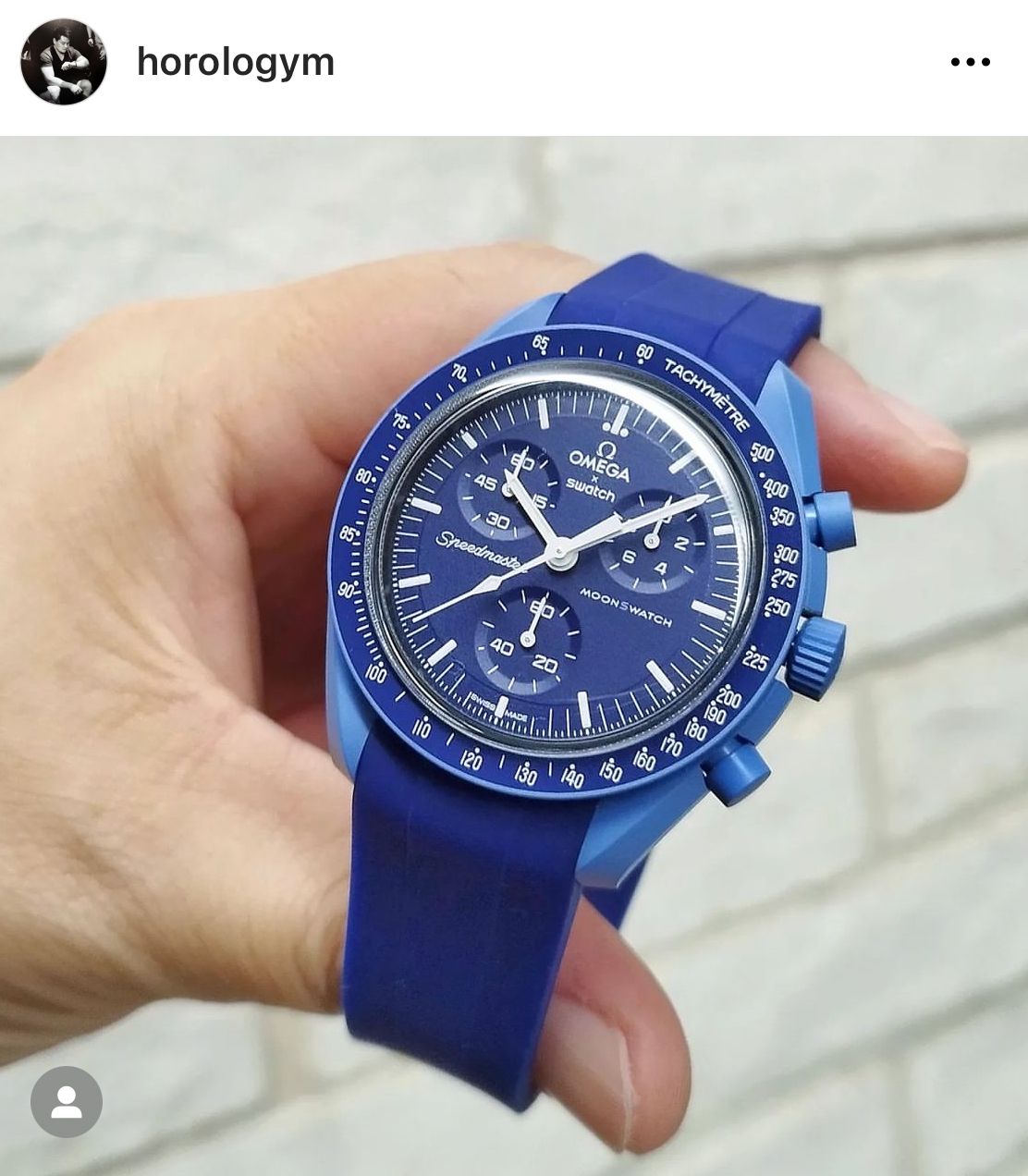 T+T: Presumably some pieces are harder to get than others? What was the final final piece in your MoonSwatch Jigsaw?

RC: The Neptune was the hardest to get – the Mars and the Mercury were hard, too, but not to the same extent as the Neptune. On Chrono24, the highest listing I’ve seen for a Neptune is $4,500 USD.

Why is the Neptune so hard to get? My understanding is that one person took a photo of some discolouration from the Neptune caseback on his wrist. That was the only picture ever circulated – I didn’t see anyone else complaining about that problem. But for whatever reasons, Swatch did not restock that particular model until earlier this month.So for about five or six months, there wasn’t a single new Neptune released in the market. To me the Mission to Neptune was like the Holy Grail.

But one day, I was meeting my friends for lunch at the Marina Bay Sands, which is two floors above the Swatch boutique. At 3pm, which is the usual drop time, we saw the mall security putting up the glass panels to cordon up the store so that the lines could form for a new drop.  We were lucky that we were some of the first people in line. There were only three Neptunes at that release. But luckily my friends and I managed to snap them up.

T+T: Congratulations on completing the set. It sounds like you really put the hard yards in. But how many times do you reckon you checked out the Swatch boutique over the past six months?

RC: Well, I met my friends at least three or four times a week and we’d always walk past the Swatch store every single time to check. So it would have been a lot of times! 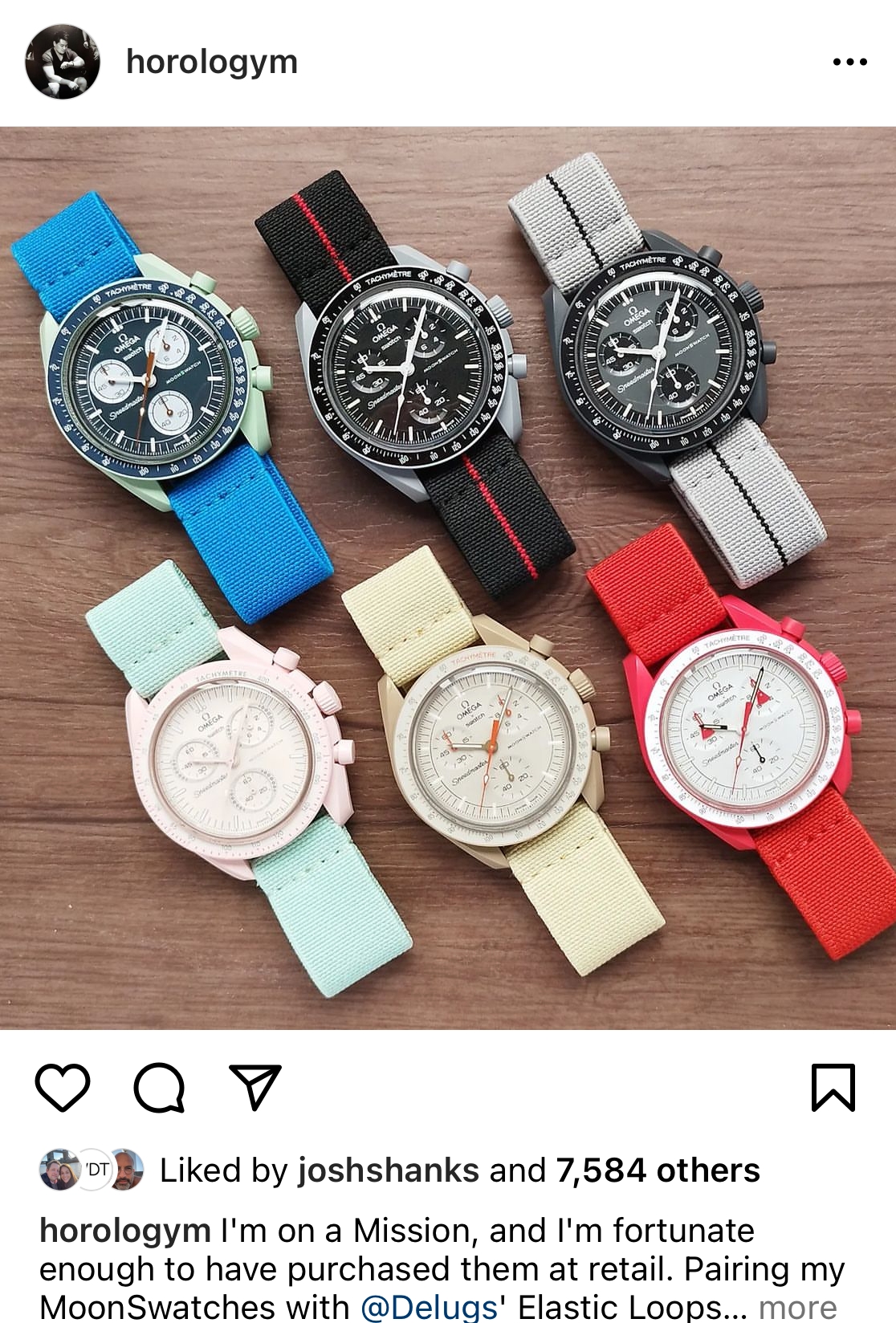 T+T: Now I appreciate you’re not looking to sell your collection. But have you any idea how much a full MoonSwatch set is actually worth? They’ve got to be pretty rare.

RC: I heard a story about one guy – a big time Omega collector with a very high disposable income – who purchased the entire set from multiple resellers just after the launch for $28,000 USD. I’m not so sure how true that is, but that’s what I heard.

But for me what was special about the way I got my MoonSwatch collection was that I did it through friendship. I mean, of course, each time we got together we were hoping that there was a drop on that particular day. But even if there wasn’t, my friends and I enjoyed having an excuse to get together. That six months actually brought our circle of friends closer together. Catching up with each other, our conversations were not just about watches, but about our lives and our families and so on and so forth. For me, that was particularly valuable after lockdown – just getting to hang out with my friends and see them without their masks on – that was such a nice thing after the last few years.