Launching a completely new watch collection (starting-from-a-blank-page new, not variations on an existing line) is a high-risk game that involves huge costs: the cost of design and development – and if it’s not a resounding success (heaven forbid), the cost to both brand equity and bottom line. No wonder it’s a rare event. Even rarer is the launch of an entirely new collection for women. Partly for the above reasons and also because women, to this day, remain a bit of an afterthought in much of the watch industry. The old “give her something with diamonds and a quartz movement” school of thought has remarkable stamina. 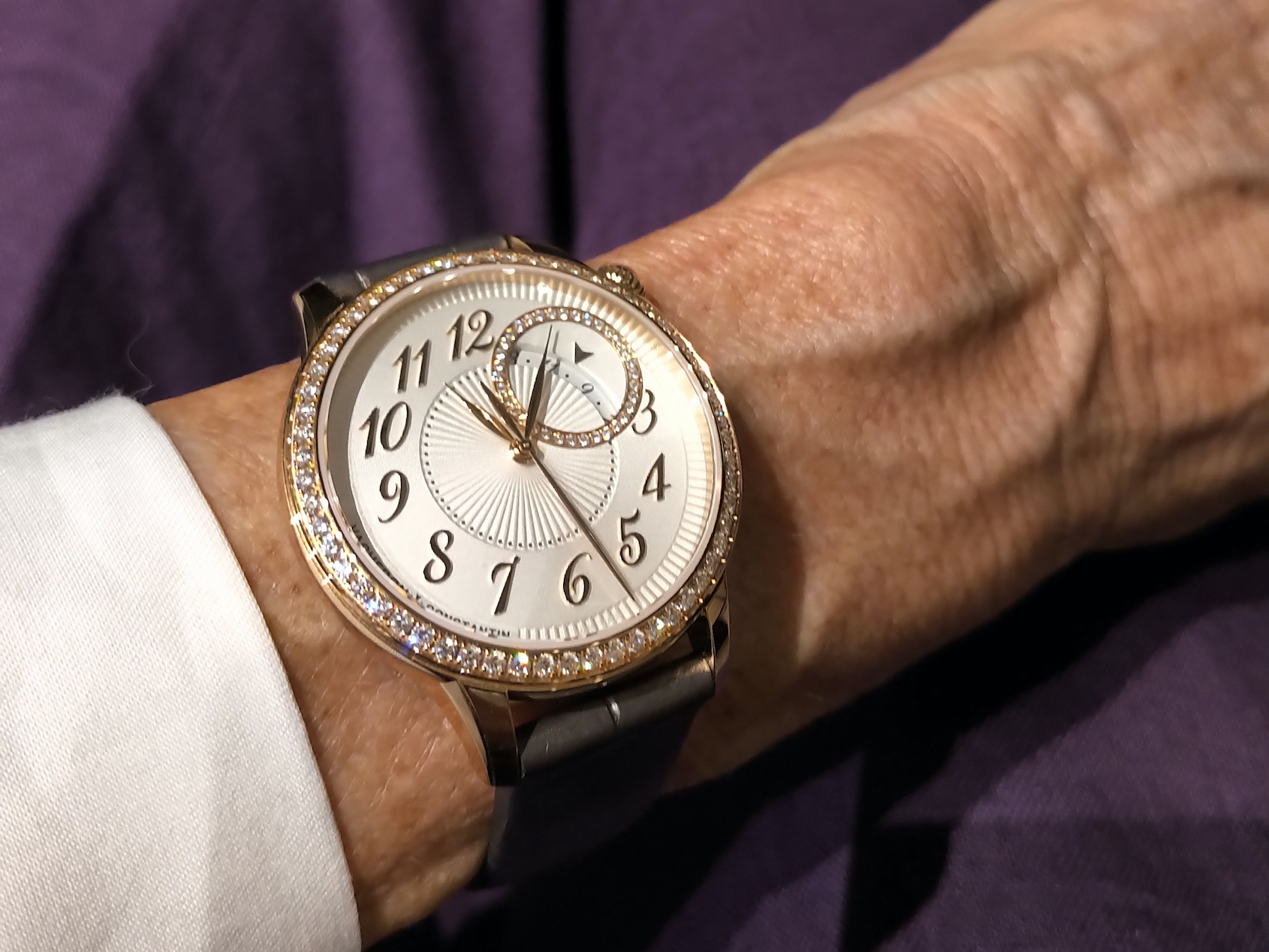 So the first whisper that Vacheron Constantin was planning a new women’s collection prompted a discussion with some girlfriends – if there were such a thing as an ideal watch for the 21st-century woman, what would it be? On several points we were unanimous: it should have real presence on the wrist (no fluffy, girly nonsense – and bland is utterly taboo); its design should exude character and confidence (like the women who will wear it); it should be packed with beautifully crafted details; it should show some self-control in the bling department (yes, we women like diamonds but not all the time, smothered all over the place); and it should – obviously – have a good mechanical movement.

A week before today’s launch, I had the privilege of spending an afternoon with Vacheron’s new Égérie collection. How did it measure up to our ideal?

But first: what’s in a name? 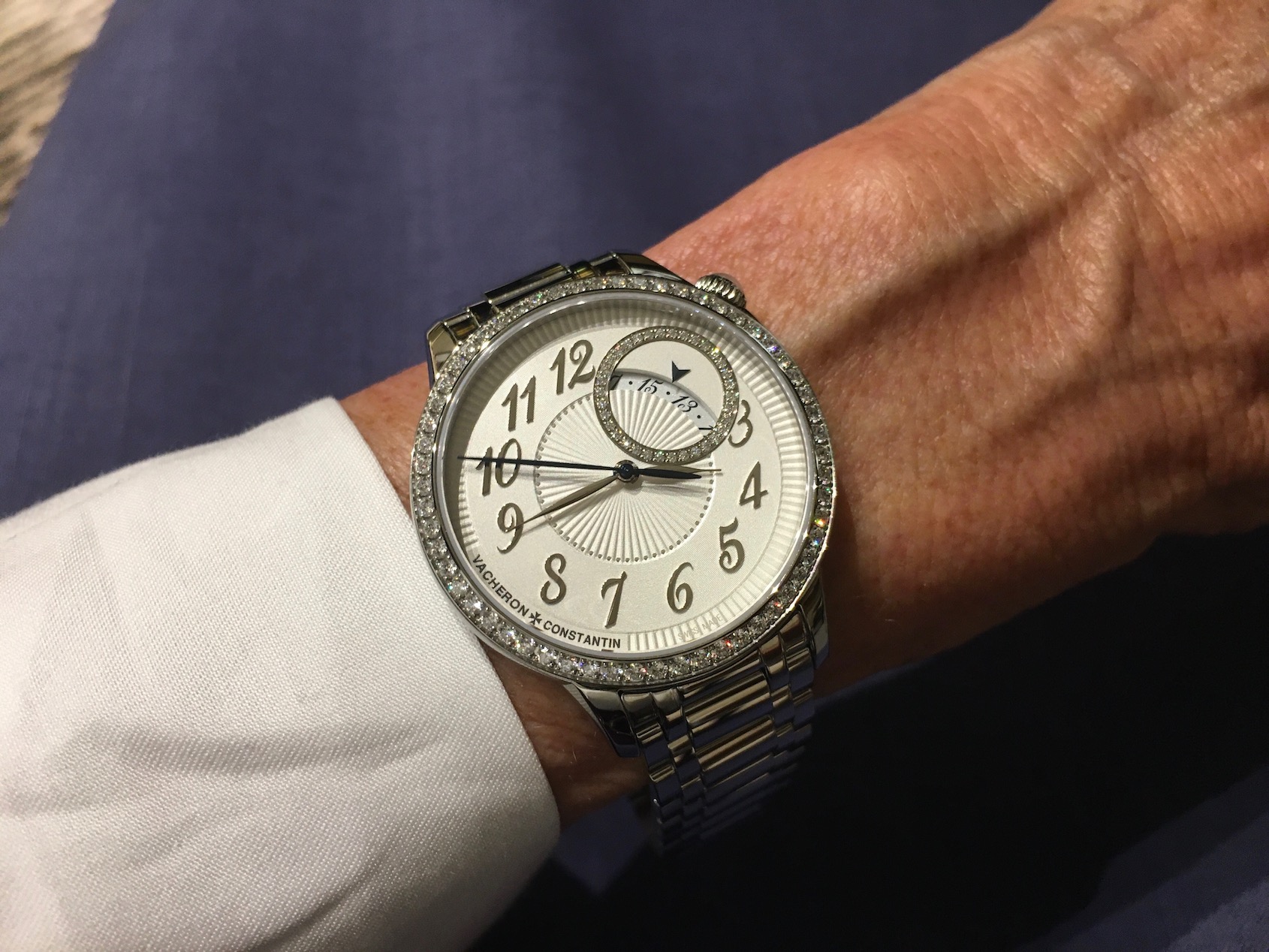 Well, it is very French; its roots are not immediately obvious – unless you are a scholar of ancient mythology – and its correct pronunciation even less obvious, unless you are Francophone. (Derived from Egeria, a nymph in ancient Roman mythology, égérie means muse or inspiration. And it is pronounced [eʒeʀi]). I like Vacheron’s courage in not choosing a totally “safe” and easy name. 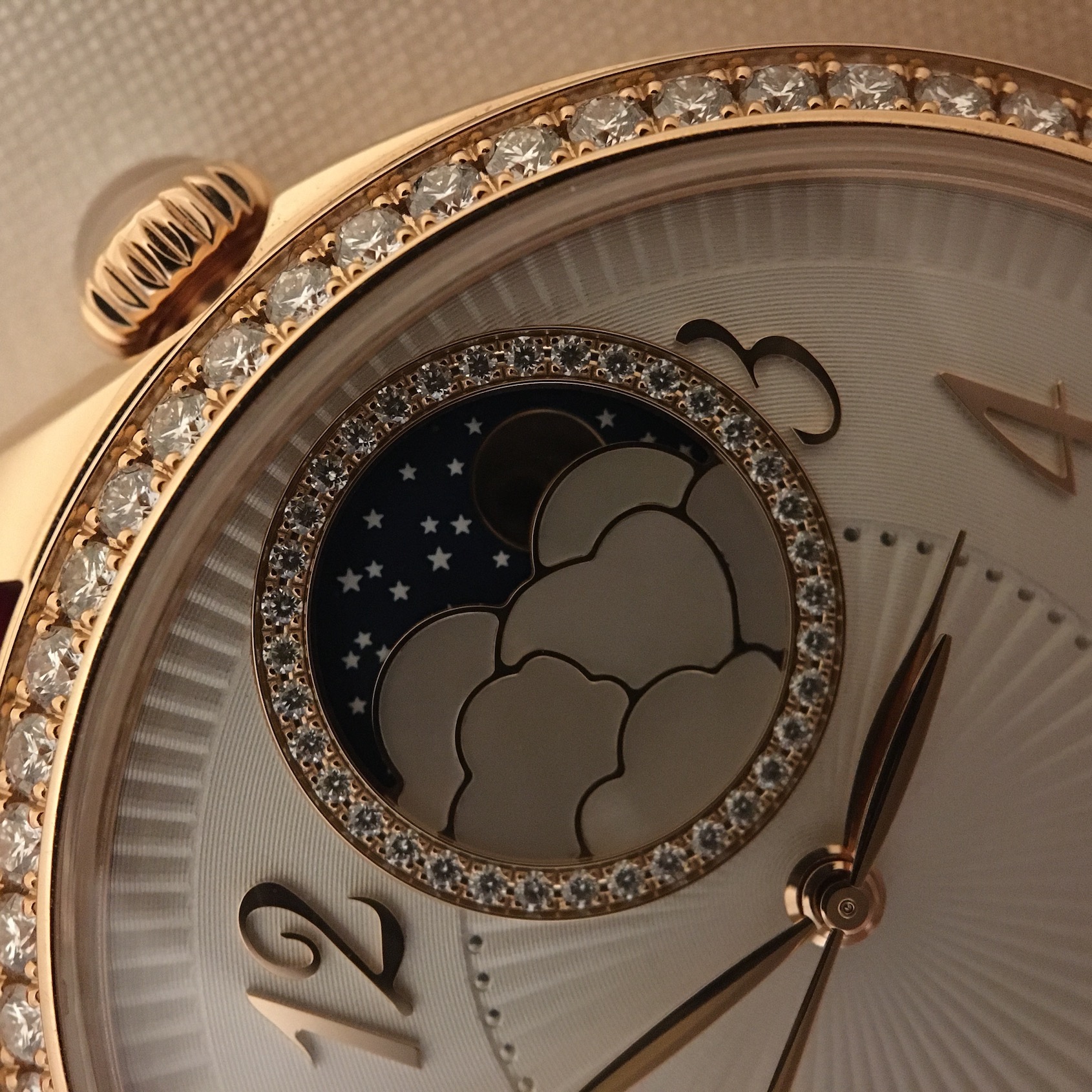 Rich, lush, round, strong, lively, intriguing – those were the words that sprang immediately to mind when the cover was lifted off the tray to reveal the watches. Although they were emphatically feminine, there was nothing “fluffy girly” about them. While some elements brought to mind certain aspects of some other watches I may have seen, everything added up to a distinctive and highly attractive whole. Creamy-white dials with lots of texture and detail – and an asymmetric layout that elevates the design far above the predictable or classical.  Two models: a time-and-date or a moon phase. Two metals: steel or pink gold. Two types of strap: alligator leather in four colours, or a steel bracelet. Two sizes, both of them assertive, with real presence: 35mm for the date version and 37mm for the moon phase. (There is also a fully diamond-set white gold version of the moon phase model.) 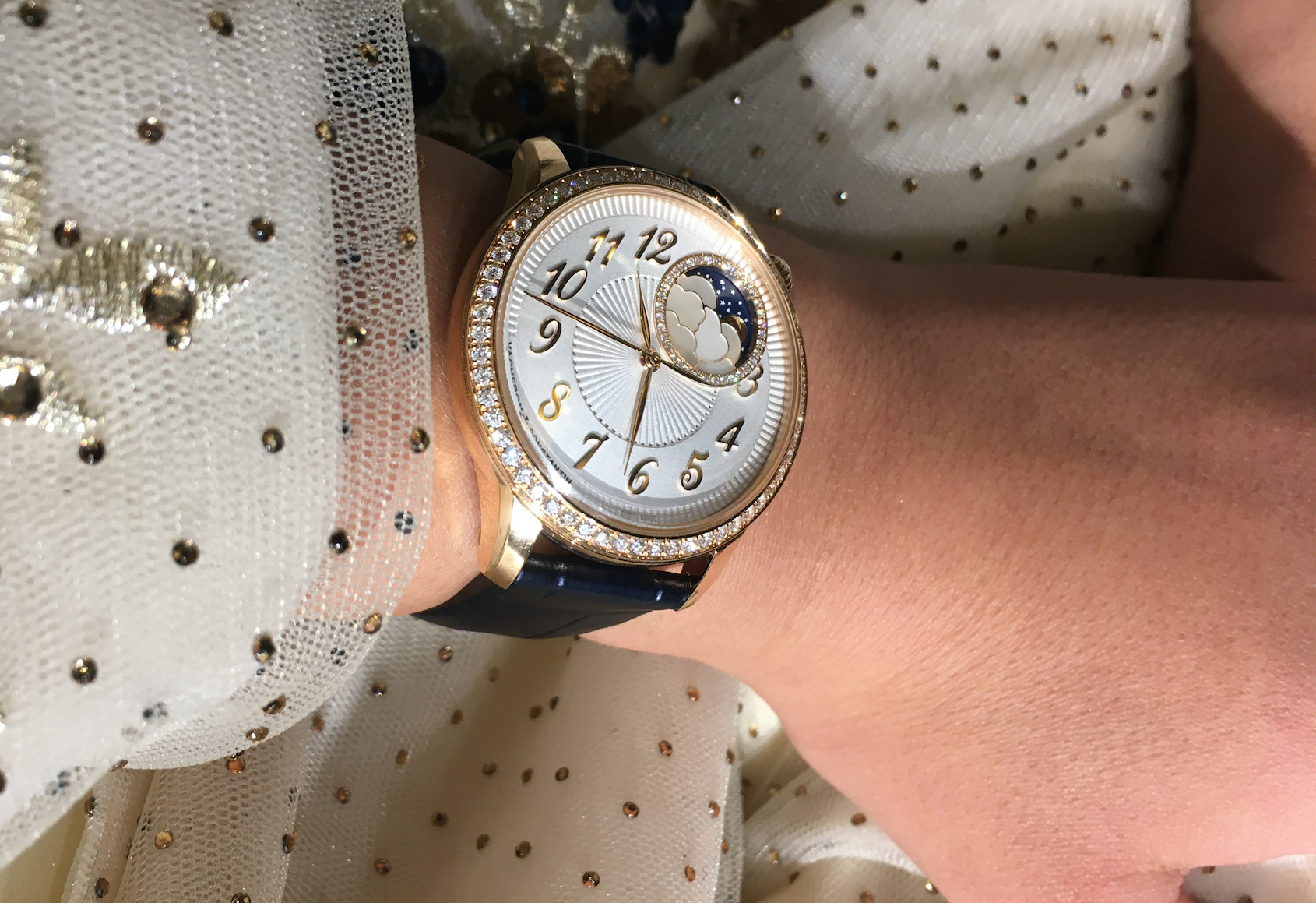 The most striking thing about the watch is the asymmetric dial layout – with the design based on circles within circles, the complication display at 2 o’clock and the moonstone-capped winding crown in the corresponding position. But look closer and there’s a whole lot more to enjoy. 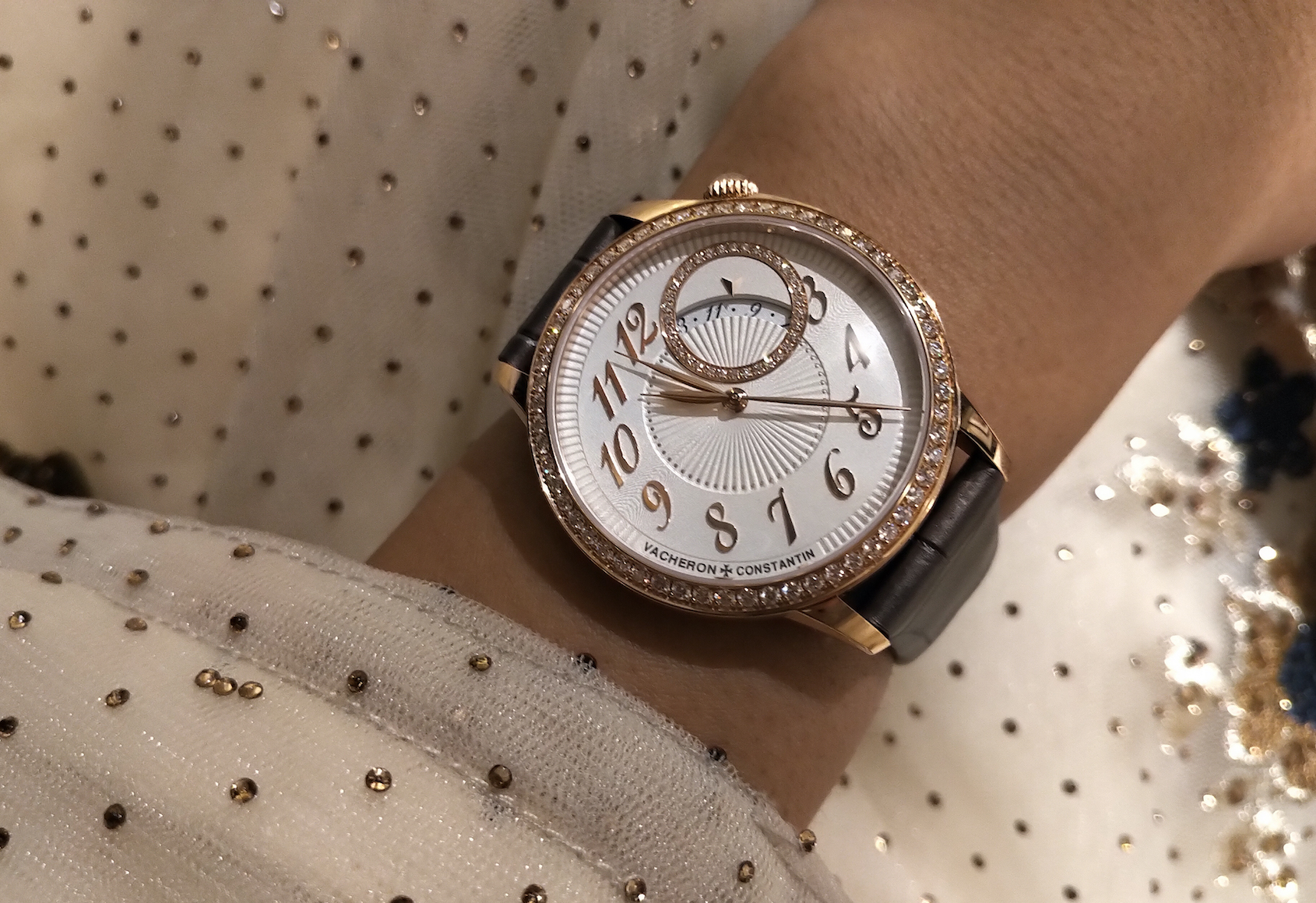 Vacheron says that the collection takes inspiration from the crafts used in Haute Couture. That may seem unexpected for such a quintessentially Swiss house but there’s a natural affinity through the use of highly refined craft – and the Maison has history in this area, having sponsored “artistic crafts” weeks in both Paris and London in the not-so-distant past. The Couture inspiration is expressed most noticeably in the guillochage, which resembles sunray pleating in the centre of the dial and around the outer circumference. Tiny polished dots at the edge of the inner circle of pleats are reminiscent of hand-embroidered French knots. 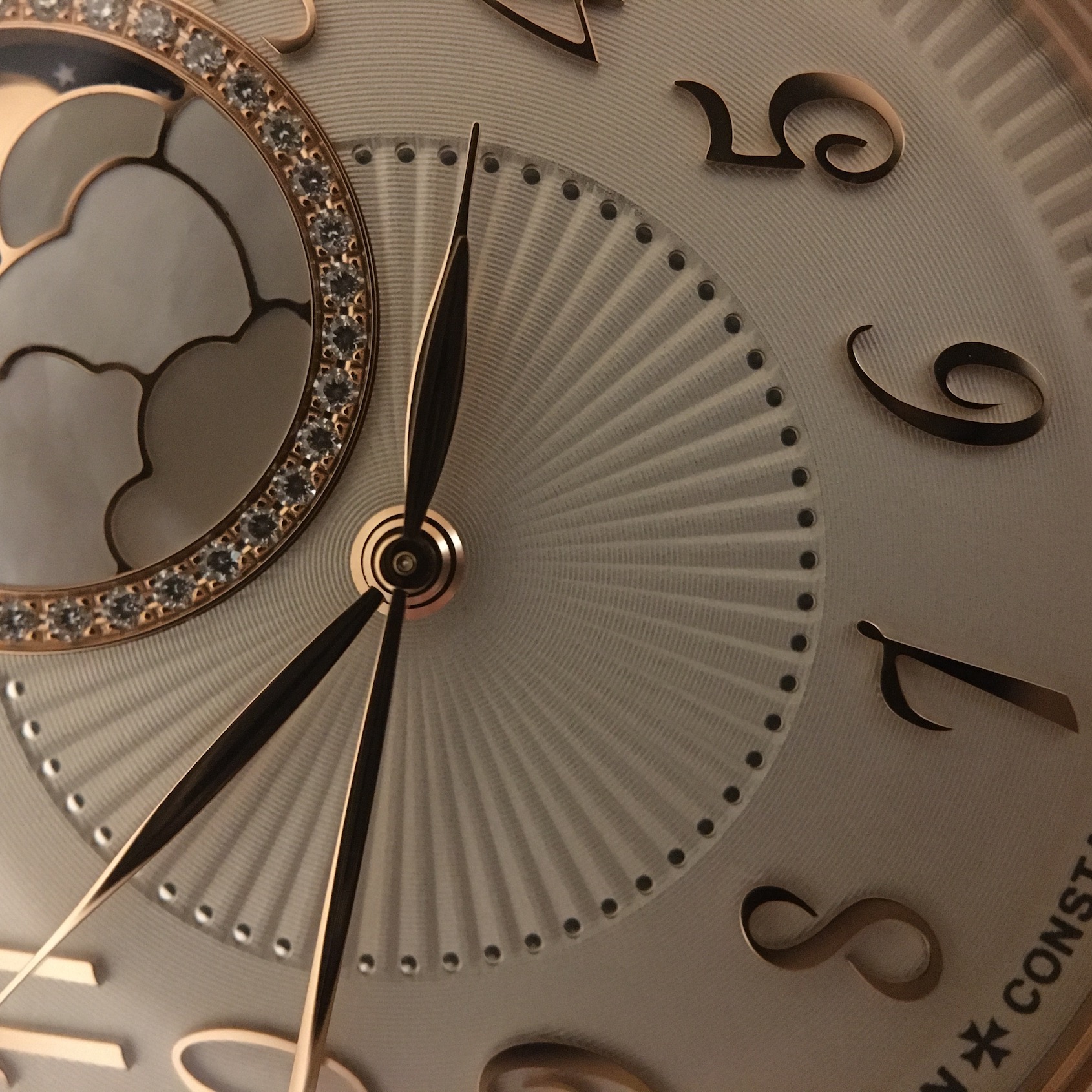 The applied numerals (pink gold on the pink gold model, white gold on the steel) are set on a band of simple circular guillochage. Bearing a strong family resemblance to the numerals Vacheron has used on some previous watches (such as the Historiques American 1921) the Arabic numeral font was specially designed for Égérie, with finer lines, softer curves and a slight slope to add a subtle sense of movement and lightness. 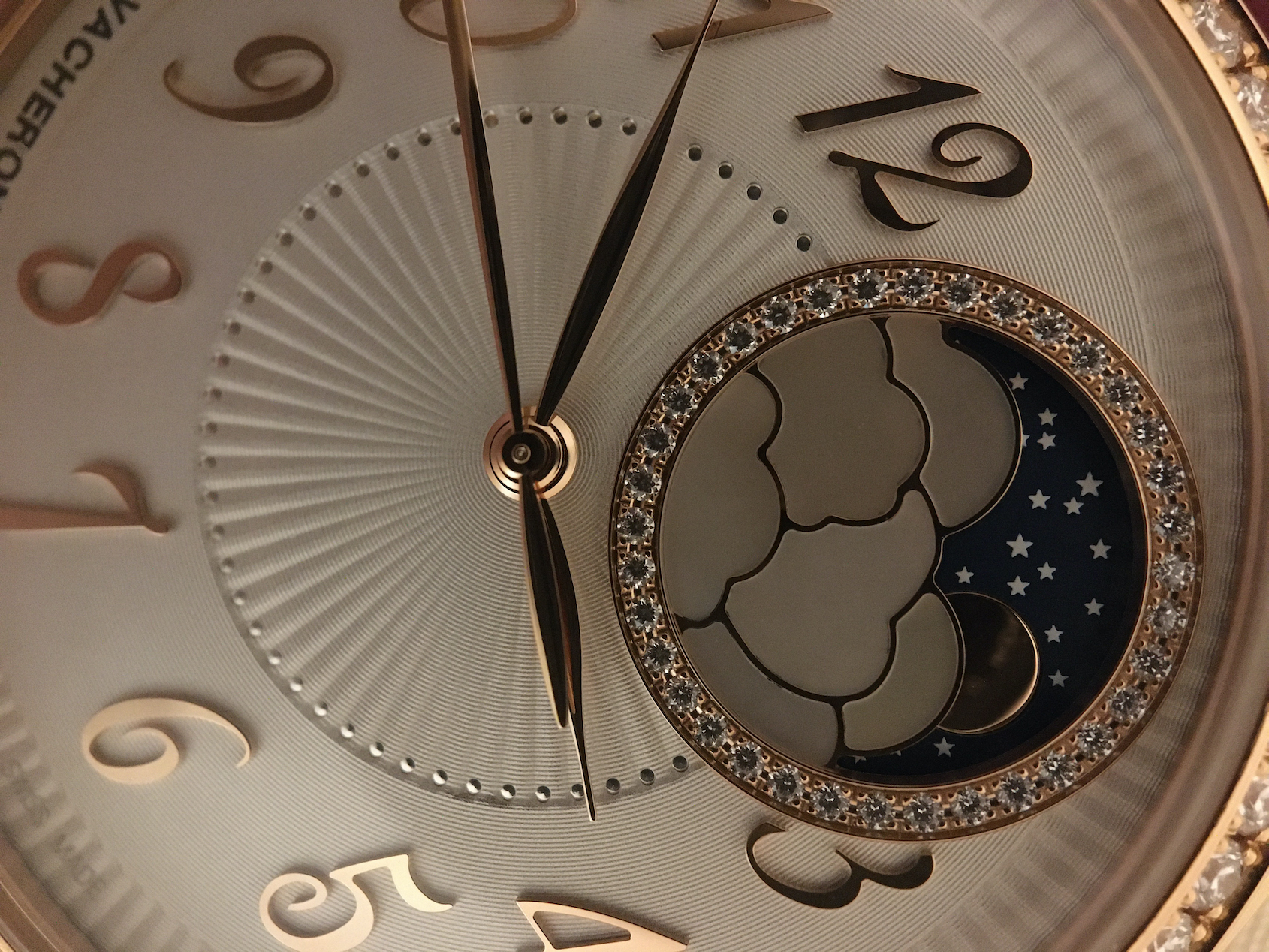 The complication displays are each beautiful in their own right. The date display, a curved aperture within the small circle, is hands-down one of the loveliest I’ve seen. The printed date-disc numerals use the same font as the applied hour numerals and a tiny applied gold arrowhead points to the exact date. It’s proof that thoughtful design can elevate even the most basic complication into a thing of beauty. The moon phase display is, likewise, a step above many others. Free-form gold shapes are inlaid with mother-of-pearl then collaged together to form a puffy cloud. Given the minute height tolerances and fragility of the paper-thin mother-of-pearl, it’s hard to imagine a finer level of craftsmanship. 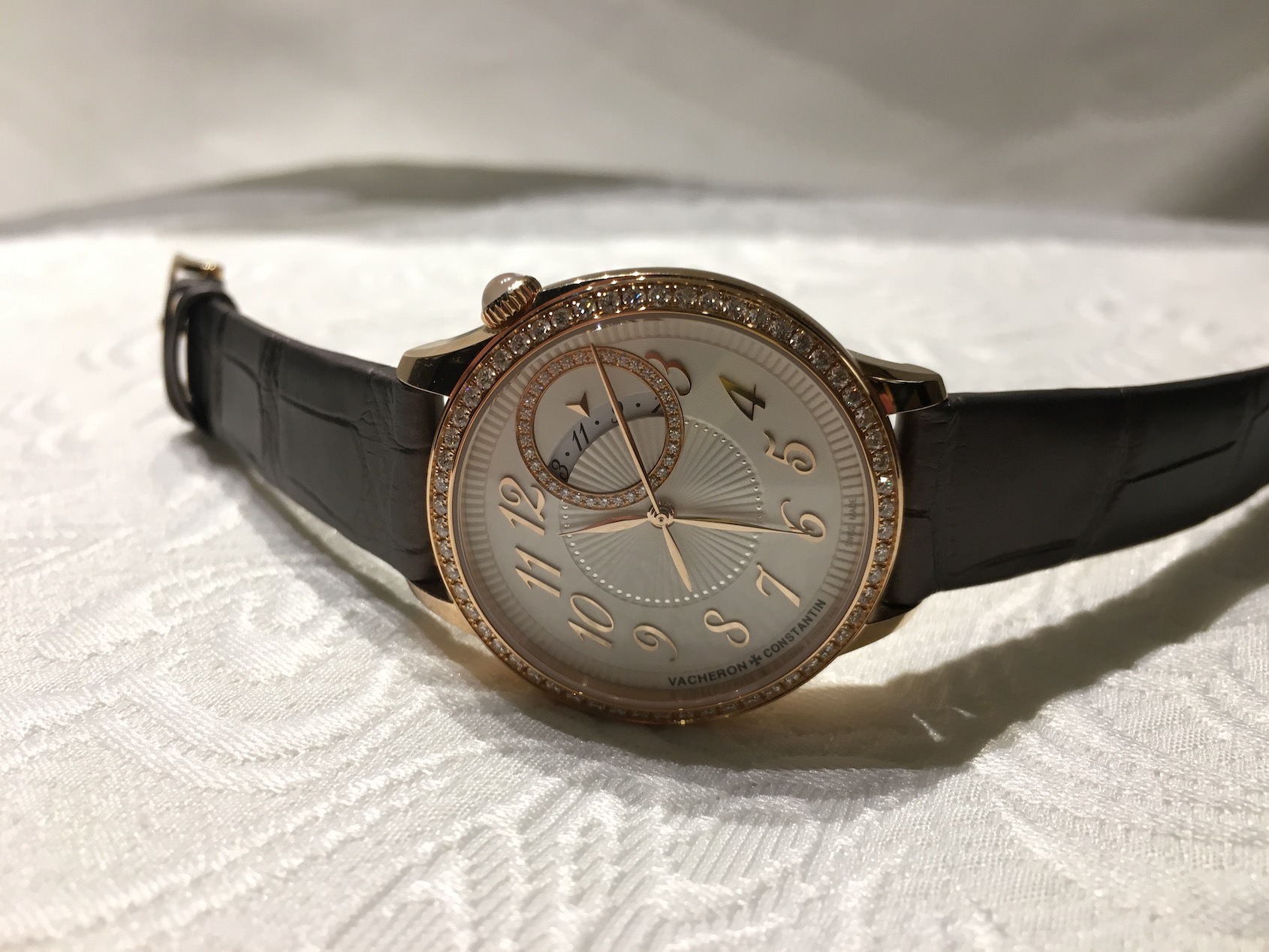 Of course, all of this loveliness would not make the “ideal woman’s watch” cut without a proper mechanical movement. Vacheron Constantin has developed the self-winding Manufacture calibre 1088 for the Égérie collection – with the variant 1088L denoting the added ‘lunar module’ for the moon phase complication. Both versions offer a respectable power reserve of 40 hours.

Thanks to the smoothly rounded pebble shape of the case, both the 35mm and 37mm watches feel (and look) extremely comfortable on the wrist. They are not small cases but they seem to have some kind of shrink-to-fit magic for my very thin wrist – while doing the opposite on the larger wrist of the Vacheron Constantin representative who was in the room. Equally intriguing is the optical illusion that, when worn, both sizes appeared to be the same. 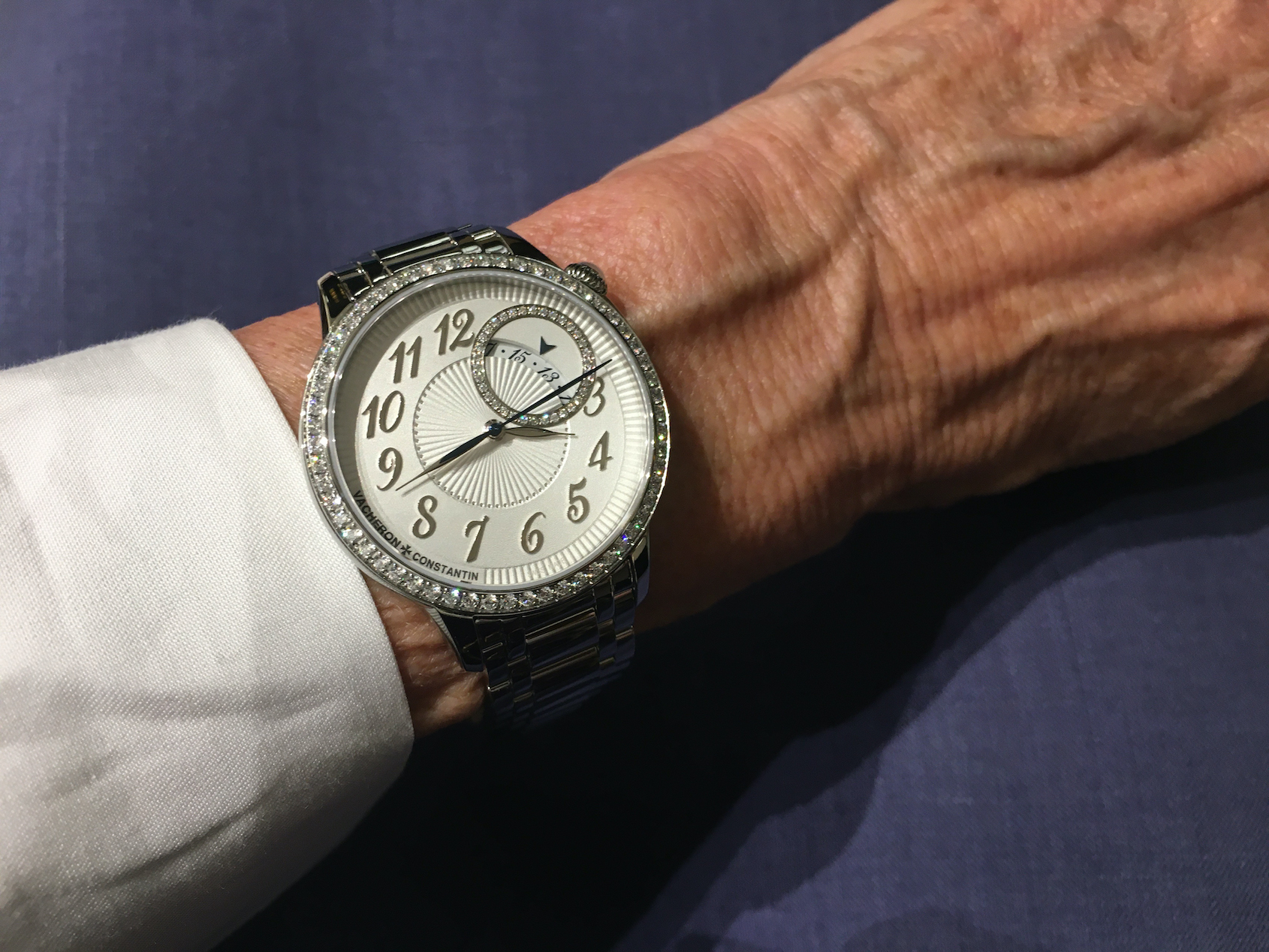 Back in 2016, with the introduction of the new Overseas collection, Vacheron pioneered the inclusion of multiple straps as its standard offer, with a quick-change mechanism to make the swapping easy. (While the easy-change mechanism is becoming more common, surprisingly few brands have followed Vacheron’s lead by including alternative straps in the box.) For the Égérie, it’s a no-brainer. These are dressy watches and we girls like to change our accessories according to our outfits – and our mood. Bonus points for the simple clip hidden under the spring bar being totally manicure-friendly. The ‘standard’ colours of the alligator are anything but standard: a rich, deep blue with a very subtle pearly sheen; a chic taupe (which Vacheron calls ‘chestnut’) and a vivid bougainvillea pink. The steel watch is also offered on a non-interchangeable steel bracelet. 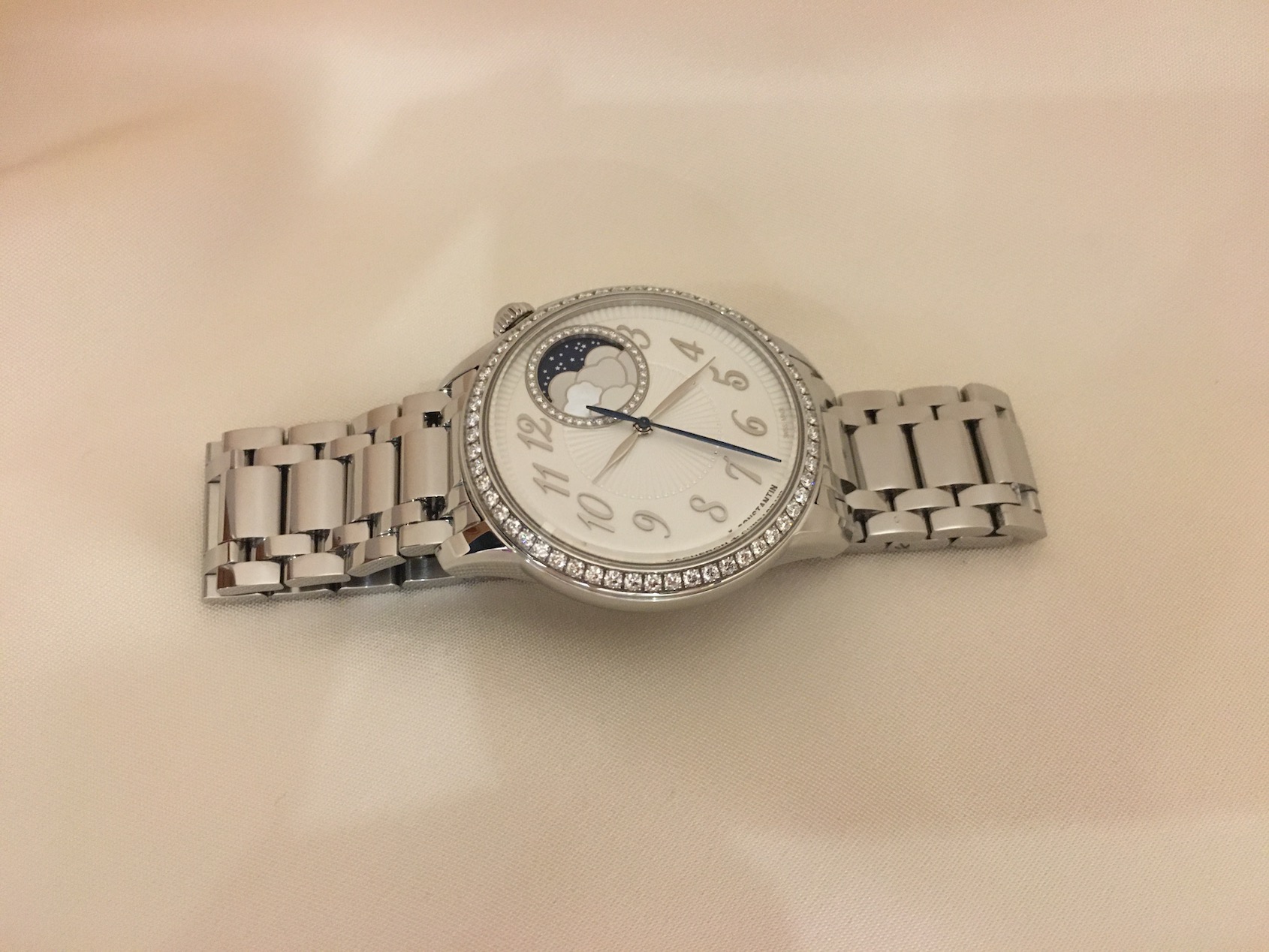 The personality change is immediate with each strap colour – and with the metal bracelet. That 5-link ribbon of steel – an array of rounded, polished surfaces that dance in the light – feels as soft as silk on the skin. (One day I’d like to do a head-to-head bracelet challenge – assembling the industry’s finest, men’s and women’s, and doing a blindfolded comfort test. I’m certain that this new Vacheron bracelet will be right up there, if not the outright winner.) If there is anything that I would change about this watch it would be to make the steel bracelet interchangeable as well. That way, I could wear the watch pretty much everywhere, all day. Which would make me very happy.