One of my very first articles for Time+Tide was a short overview on Yema and their key models, and since then their growth has been meteoric. Although they now hardly need any introduction as one of the most popular microbrands, the French brand has mastered their own niche within the dive watch scene. Both then and now, my favourite watch was the Yema Navygraf with its rich creamy lume, bold yellow hands, and 1970s charm like no other. Now, we’re being treated to two new versions of the Yema Navygraf in continued collaboration with the Marine Nationale. 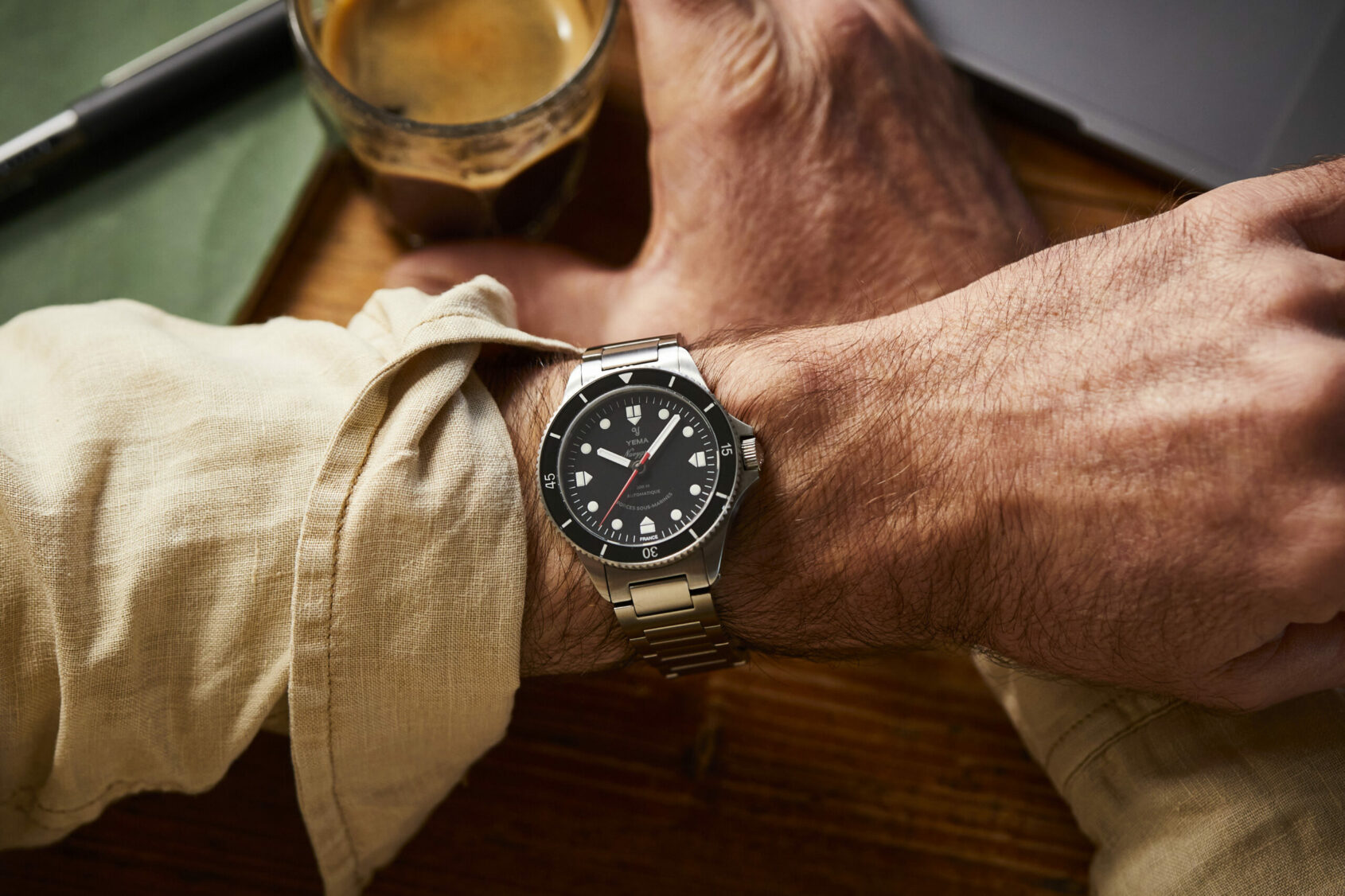 The Force Océanique Stratégique (FOST) finds its origins 50 years ago on January 28 1972, when the first French ballistic missile submarine named “Le Redoutable” was launched into duty. Now known as the French Submarine Forces, the Marine Nationale has an impressive fleet and a formidable international recognition. As the official partner of the Marine Nationale, Yema created two limited and numbered edition watches to celebrate the 50th anniversary of that milestone, with just 50 pieces each available exclusively to Marine Nationale employees. By popular demand, these two versions of the Yema Navygraf will soon be in the general public’s hands. 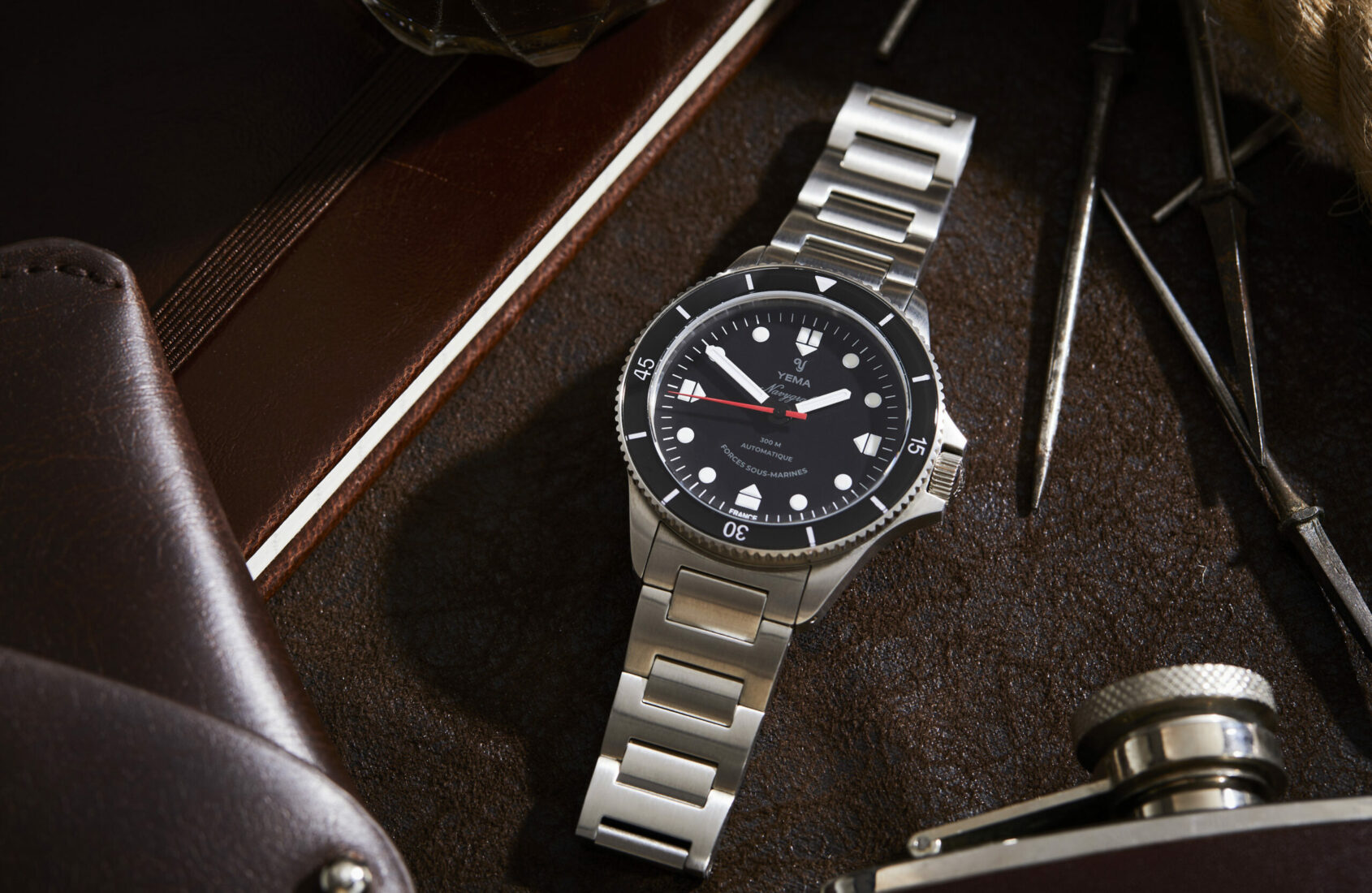 The Yema Navygraf case is an instant winner, with a wrist-friendly 39mm diameter which doesn’t lose any visual impact. The Yema qualities are all there, with the acutely stretching lugs and petite crown guards, as well as drilled holes for ease of strap changing. Although the lugs reach quite far visually, the lug-to-lug distance is only 47mm which should be suited to plenty of wrists. The crown is embossed with a rather lovely Marine Nationale logo, and it screws down to secure the watch’s 300m of water resistance. 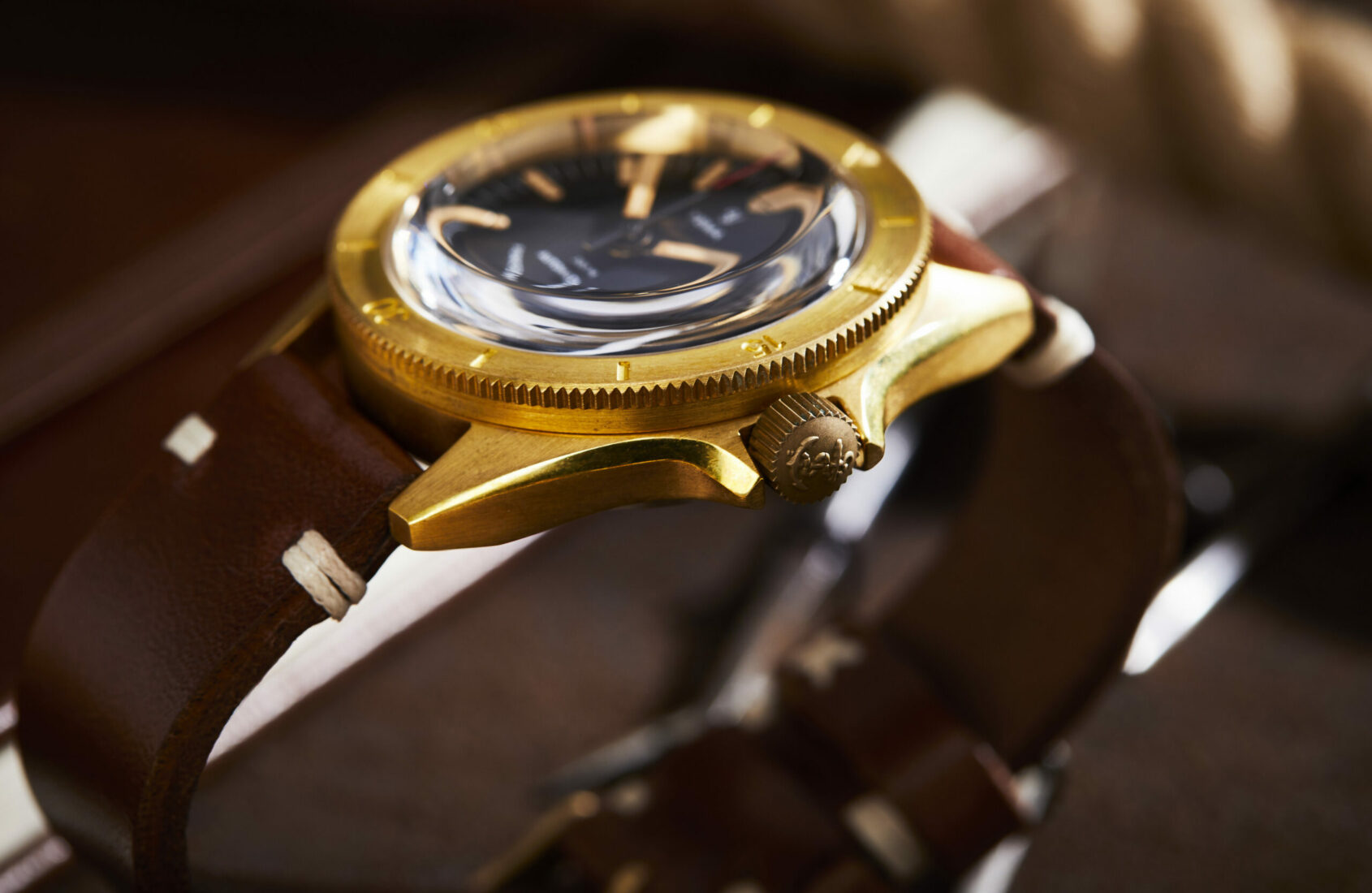 While the more modern-looking of the Yema Navygraf Forces Sous-Marines watches is made from stainless steel and features a glossy sapphire bezel, the heritage-style version is totally hewn from brushed bronze. The bronze chosen by Yema is a marine-grade alloy which resists the ‘verdigris’ bloom of green and blue oxidisation, although it quite quickly forms a moody brown patina which acts as a self-sealing protection layer against corrosion. If you need some tips on how to care for your bronze watch, you can check some out here. 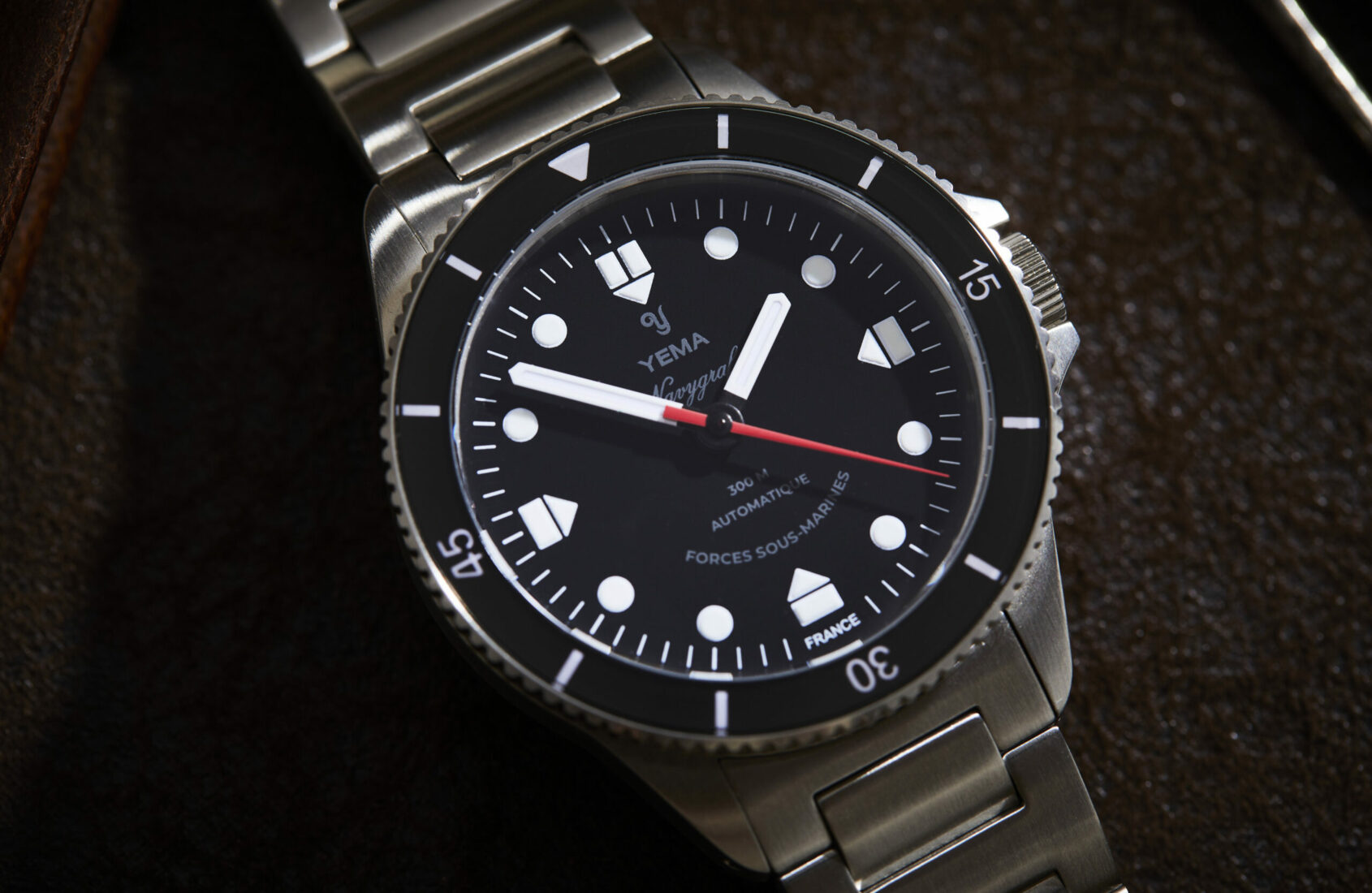 The two versions of the Yema Navygraf Forces Sous-Marines represent both the modern and historic sides of the FOST story, and as such they each sport completely different dials. The older style throws itself into the deep end of ageing, with faux-patina luminous paint and gold-painted hands. The gilt and beige theme works incredibly well alongside the bronze case, practically oozing warmth and feeling like an antique piece of diving equipment. 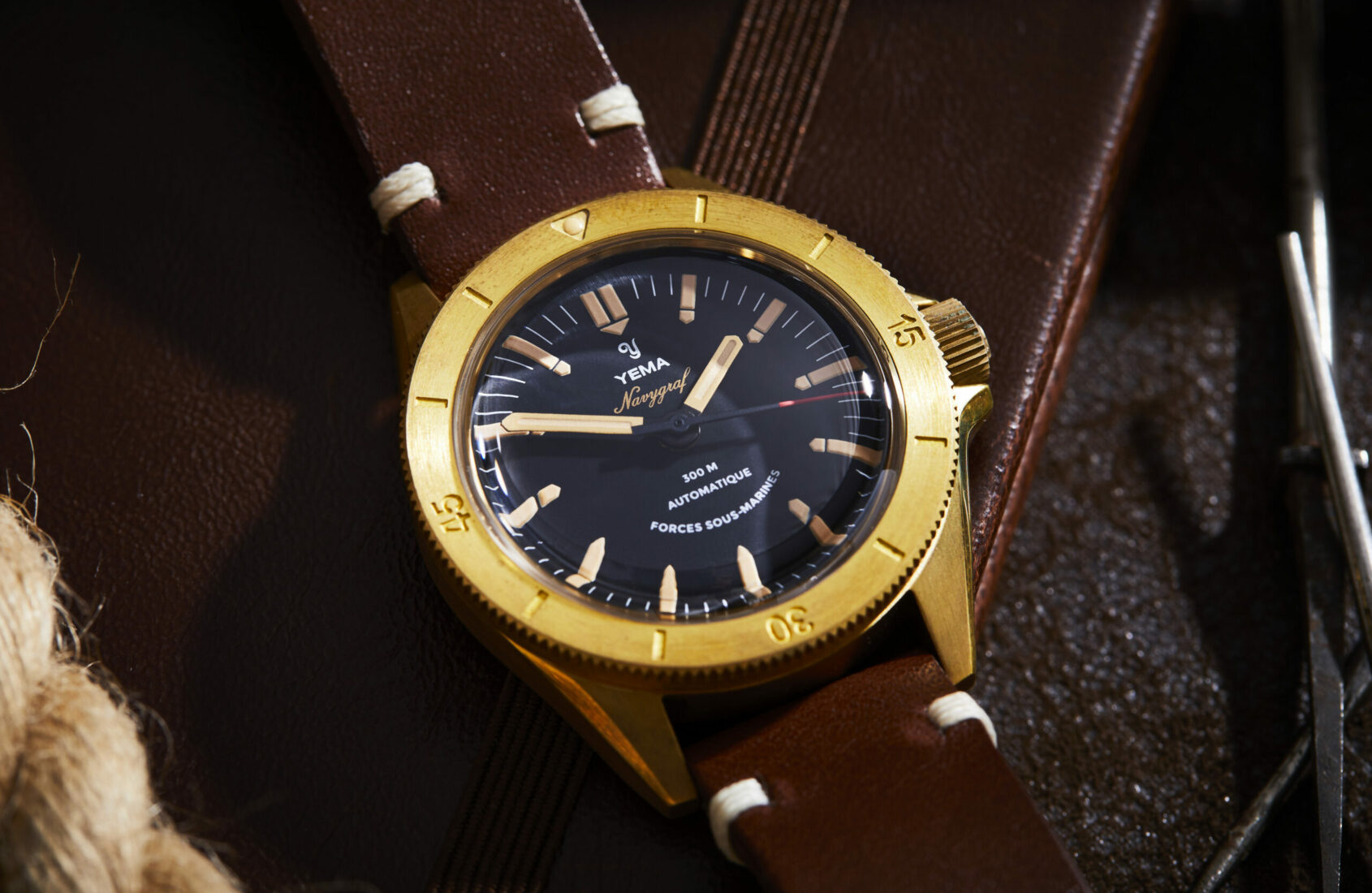 The more up-to-date version is a much cleaner and more versatile look, with a simple black and white colour scheme that really brings attention to the bright red seconds hand. The hour markers are also bolder, slightly improving legibility and taking the Yema Navygraf formula further away from its 1970s roots. The printing on the dial is in a soft grey, remaining readable but decreasing the clutter of the dial significantly, making those big luminescent markers even more crisp. 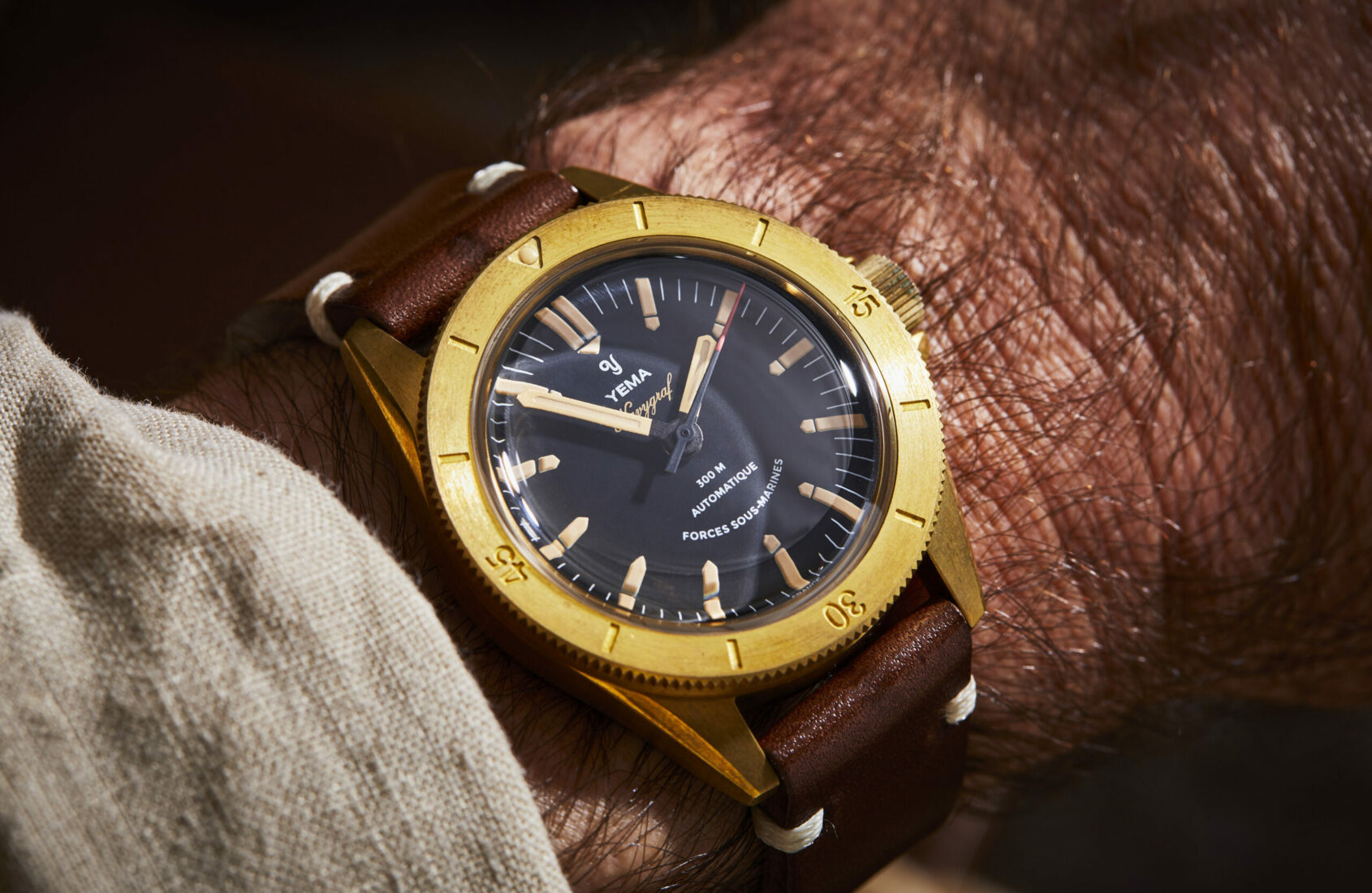 Sticking to its retro roots, the bronze reference of the Yema Navygraf Forces Sous-Marines uses a supple tropic style rubber strap that can happily jump in and out of the water. The steel version goes for a more holistic look with a solid steel bracelet, completely brushed to match the tool-watch look of the case. Both cases have drilled lugs for convenience of strap changing, although the 19mm lug width may mean you have to look a little bit harder for aftermarket options. 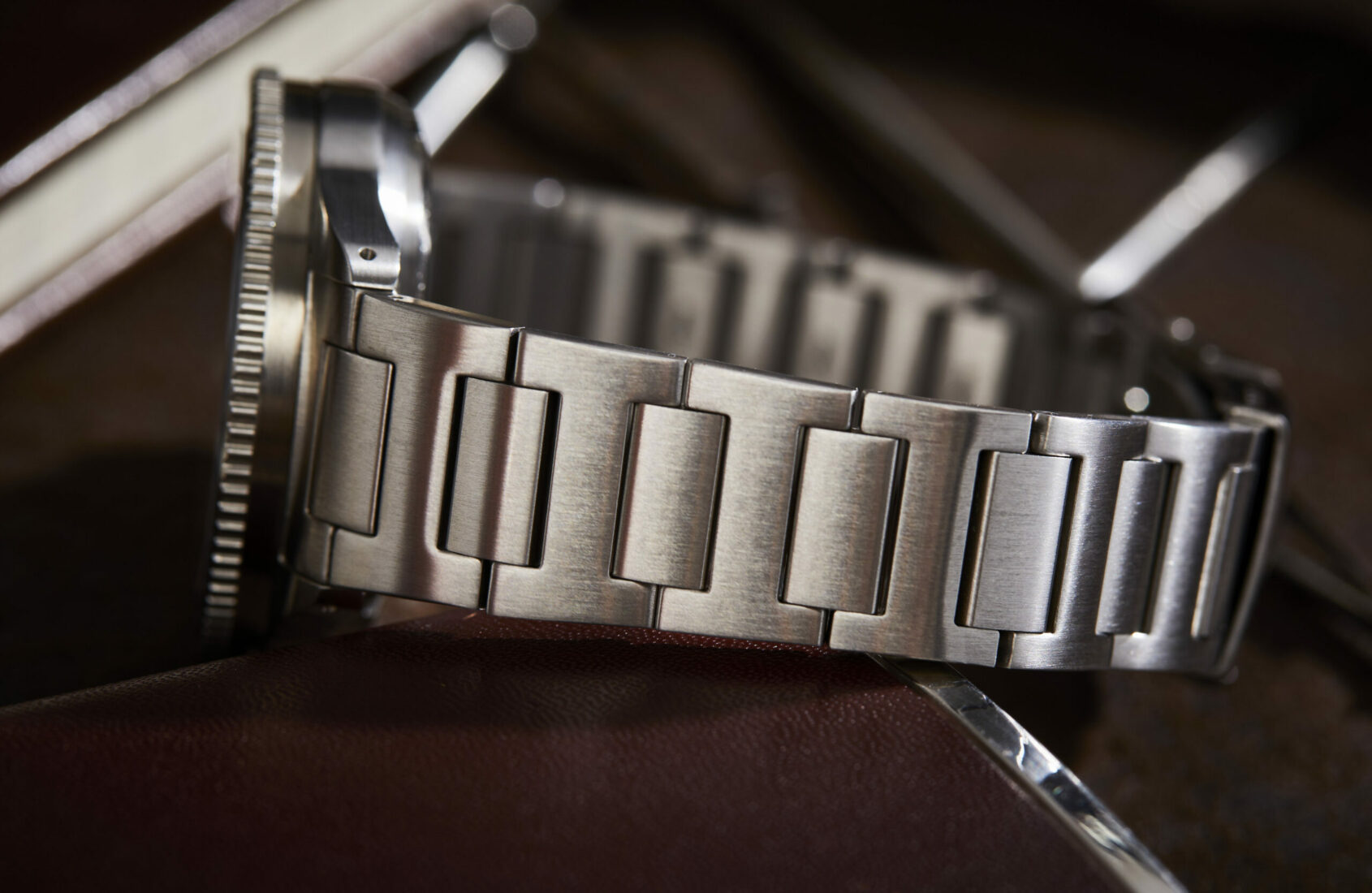 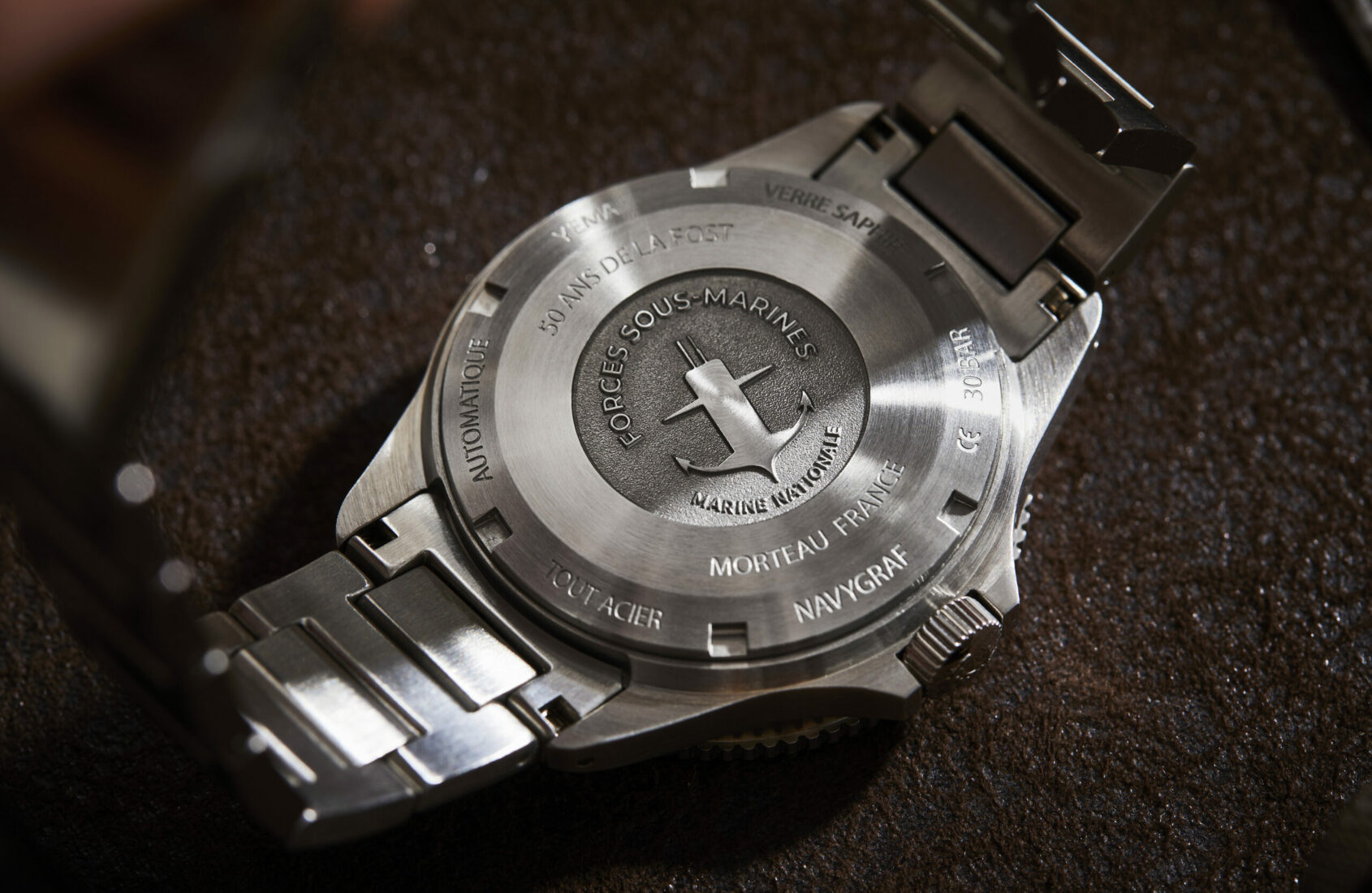 One of the Yema Navygraf’s biggest claims to fame has been its use of an extraordinarily affordable in-house movement which was first developed in 2011, and then improved upon in 2021 to create the YEMA2000 calibre. This movement has healthy yet unsurprising specifications, with 29 jewels, 28,800 vibration per hour beat rate and 42 hour power-reserve. However, the real impressive part is the in-house adjustment that every watch gets before it leaves the Yema production line. With an accuracy of +/- 10 seconds per day, you won’t see Chronometer written on the dial, but you can trust it will perform well for you. The caseback is solid, with a large engraving of the Marine Nationale anchor emblem.

The preorder for the Yema Navygraf Forces Sous-Marines will launch on Wednesday 7 September 10 am EST / 4pm CET, where you will be able to secure one of 400 watches that will be shipped out in October 2022. This is just the first batch, with other runs in the future a certainty. Price: $790/$849 USD (Steel model on strap/bracelet), $1,190 USD (Bronze model)