Even though many look to Rolex as a steadfast, unchanging bastion of the watch world, there are some definite outliers in the field. Bejewelled GMT-Masters, leopard Daytonas (which have now given way to unobtainium rainbow Daytona). These models are so uncommon and special that they do not really skew the public’s view of Rolex as a manufacturer of all-business timepieces.

The Rolex Milgauss aims to offer a moment of madness to everyday watch wearers. For years it has been known as the scientist’s watch due to its inherent ability to withstand strong magnetic forces. This is beneficial to absolutely everyone working at CERN and pretty much no one else, but hey, when was the last time you took your Submariner to 300m below the sea? I’m not going to delve into too many technical details but the internal build is as impressive as any other professional watch from this company. The 3131 movement is a familiar workhorse replete with the trademark Parachrom blu hairspring and that strong magnetic shield which lends the Milgauss its purpose in life.

So it is another over-engineered tool watch and status symbol? 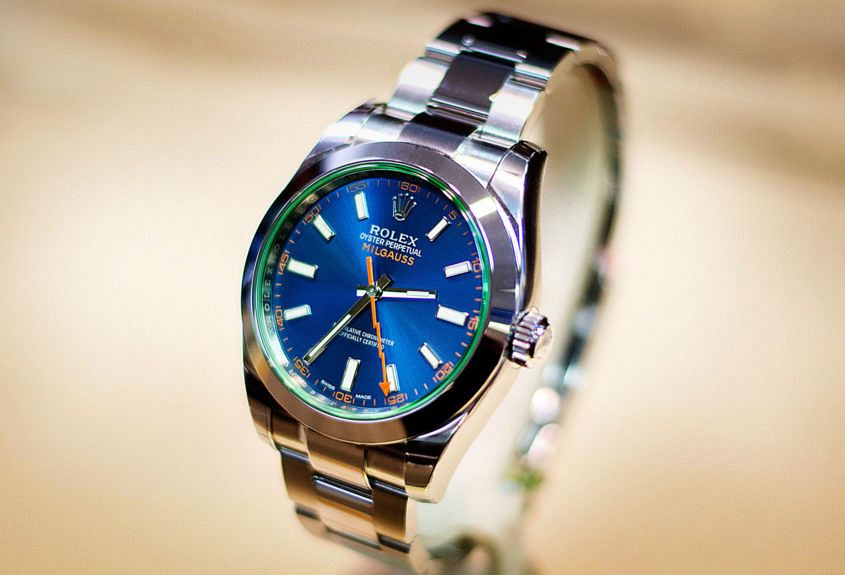 Don’t be so quick to jump to that conclusion as the Milgauss blazes its own trail in the Rolex family, especially with this Z-Blue model. Back in early 2014 some rogue Rolex design team came up with the idea that you can indeed combine blue, green and orange(!) in one watch and not end up with the equivalent of SpongeBob SquarePants on your wrist. This is not your father’s black Submariner, nor is it going to be mistaken for some kind of gaudy fashion watch. The Milgauss does crazy ever so tastefully, as only Rolex can.

Taking a closer look, the Milgauss Z-Blue first presents an initial impression of Rolex tradition with a restrained 40mm case as well as tapered lugs that are both elegant and comfortable. The classic Oyster bracelet, with polished centre links, is present and perfectly integrated. In fact, at first glance one may be forgiven for making the mistake of comparing it with the Datejust 41. The Milgauss sets itself apart from the more traditional Datejust by means of its larger case back, which is almost Sea-Dweller-like in profile and boldly emblazoned with Rolex script and four Rolex coronets, which for the brand’s devotees, is very untraditional indeed. A common criticism of the large Datejust is that its twinlock winding crown appears too small relative to the size of the 41mm case. This is not a problem with the Milgauss, which boasts a wider, beefier crown to balance out the case dimensions much more effectively. 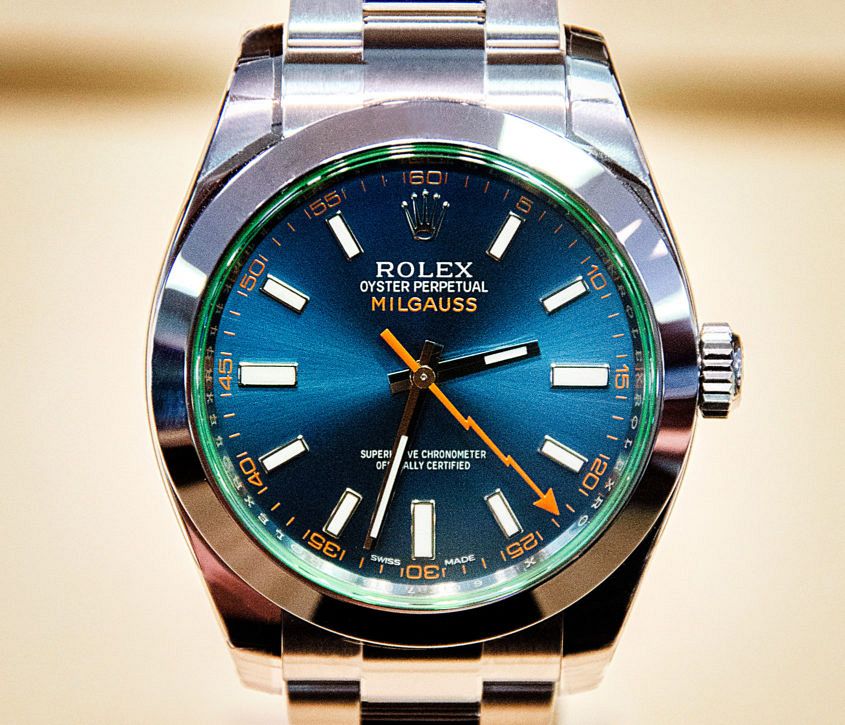 When checking out the Milgauss from an offset profile angle with good lighting, you discover a perfect way to witness the pop of the green-tinted sapphire crystal. Viewed head on, the crystal downplays the sunburst blue dial to a certain degree, but turn it slightly to the side in sunlight and a magical green ring circles the dial and lends the watch one of its main rebellious cues. The green ring of light is a result of the crystal being slightly raised above the profile of the polished bezel in a manner different from other Rolexes. It appears cut at the exact same slope as the bezel itself, almost like the base two layers of a stepped pyramid.

Slipping deeper into the details, when the watch is turned in the direct light, the rays reflect in a propeller motion glinting off countless perfect radial striations in the blue dial. Thankfully, there is no date and cyclops lens to interrupt this show. The show is stolen outright, however, by the intense orange seconds hand, boldly done in the sharp and jagged shape of a lightning bolt. Not only is the lightning hand unexpected on a serious luxury timepiece but it dominates the dial by being extremely long, striking to the very outer edge of the dial giving the perception of nearly shattering the edge of the green crystal. It takes a little getting used to seeing the tool of Zeus perform the Rolex sweep around the face of the dial and the result is mesmerising.

My initial opinion was that the minute and hour hands were too small relative to the size of the watch. When I compared them to the identical hands on the Datejust 41 I realised they appeared diminutive only because of the visual impact the lightning bolt hand had on the rest of the watch face. I believe this characteristic will be a major factor for most in the decision whether or not to acquire a Milgauss. 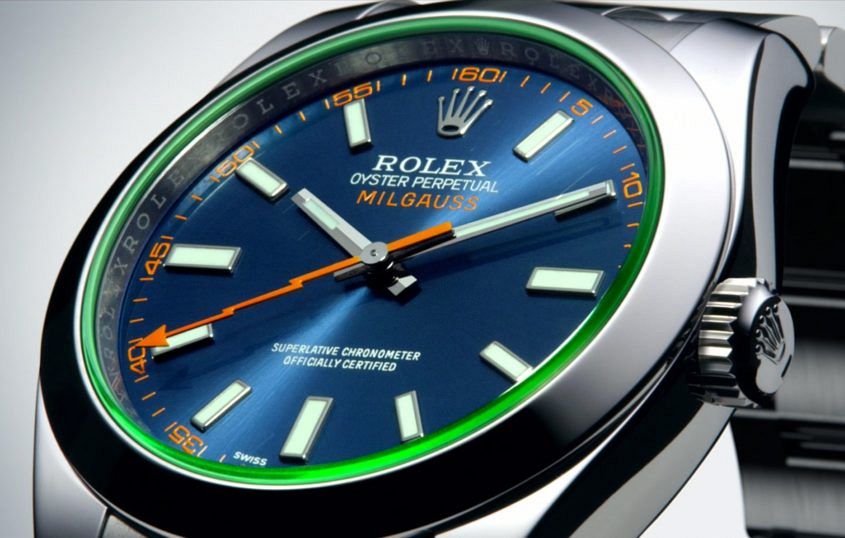 Clearly the Milgauss does a great job of distinguishing itself from the classical Datejust family but what about its position in the professional line? When handled in conjunction with the GMT-Master II, both watches have relatively the same weight and solid feel. With its deep case back, the Milgauss rivals the GMT for height as well as overall dimensions, yet it manages to be much more streamlined in appearance without losing the tank-like tangibility of the other professional models. In the sports watch schoolyard the Milgauss is the quiet, somewhat quirky but handsome bespectacled kid off in the corner plotting to be the next Nobel Prize winner.

A great watch reference can be defined as being able to perpetuate its desirability over the span of decades and the fact that vintage Milgauss watches are becoming more and more coveted and valuable helps this version’s street cred. Perhaps one day we will look back and say, “Remember that blue, green and orange version? Wow, I wish I had picked up one of those when I had the chance.” Detractors could point out the Milgauss lacks functionality without a day, date or other gizmos, and that it will always imbue a touch more buyer trepidation because of the celebrity more traditional Submariners and GMTs hold. It is important to point out that the Milgauss has a strong competitor in the Omega Seamaster Aqua Terra, which can also be specified in bright colour schemes, has recently been upgraded, and is less expensive.

So within its rogue role in the Rolex lineup, the Milgauss is a high quality and beautifully made watch with a measure of madness built in and will make a bold acquisition for the discerning buyer who doesn’t completely hide their extroverted side at the office. There are more functional watches at this price point but none offer this combination of personality and brand value.