Editor’s note: Fergus Nash, the writer of this piece, is one of Time+Tide’s newest members of the writing team. Increasingly, I am finding that his point of view – rich with analogy, kaleidoscopic associations and energy – is connecting me with the watches he writes about in new ways. Not just new ways, enriching ways. Consider this piece. One of many OF Tourbillon Chronograph reviews. But I’ll wager it will be the most memorable you will read, if not just for the visual treasure map of imagery that it creates, and leaves glittering in your mind.

Every now and again you’ll see an object where the stars have aligned, and everything just looks in its right place. This seems to happen disproportionately often with Bulgari’s Octo Finissimo line, a range of watches that sets out to melt the hearts of design lovers as well as smash the record books of technical achievement. With its perfect proportions, balance of symmetry, colour and weight, the Bulgari Octo Finissimo Tourbillon Chronograph Automatic is just the latest triumph in a long, long line. 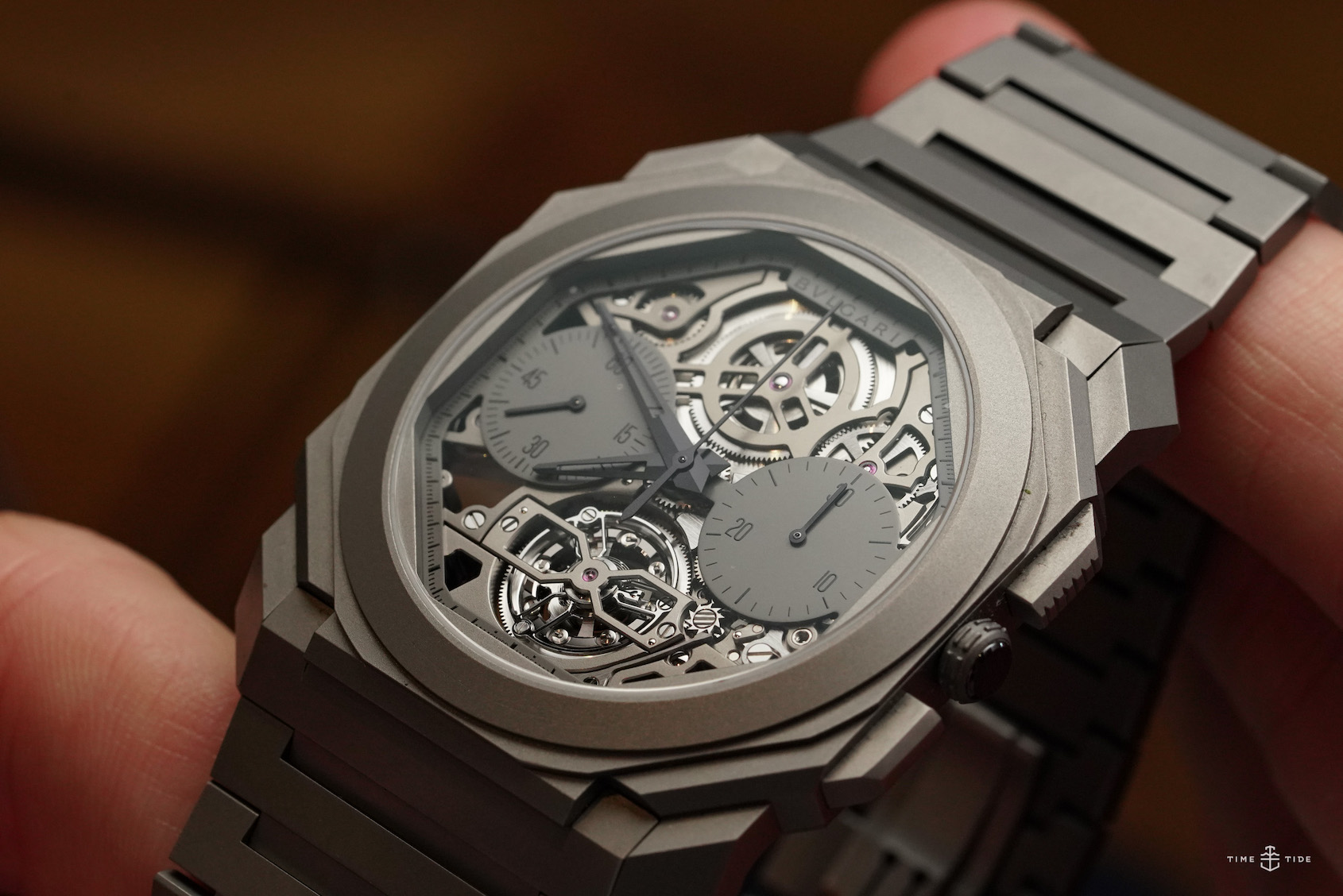 Though there’s no shortage of skeleton dials in the world of ultra-luxury chronographs, there’s something about the Octo Finissimo that makes it feel more skeletal than usual. The way that the movement is laid out seems to echo the case design perfectly, with its sleek, deliberate angles and palette of greys making the watch evoke an ancient stone effigy. 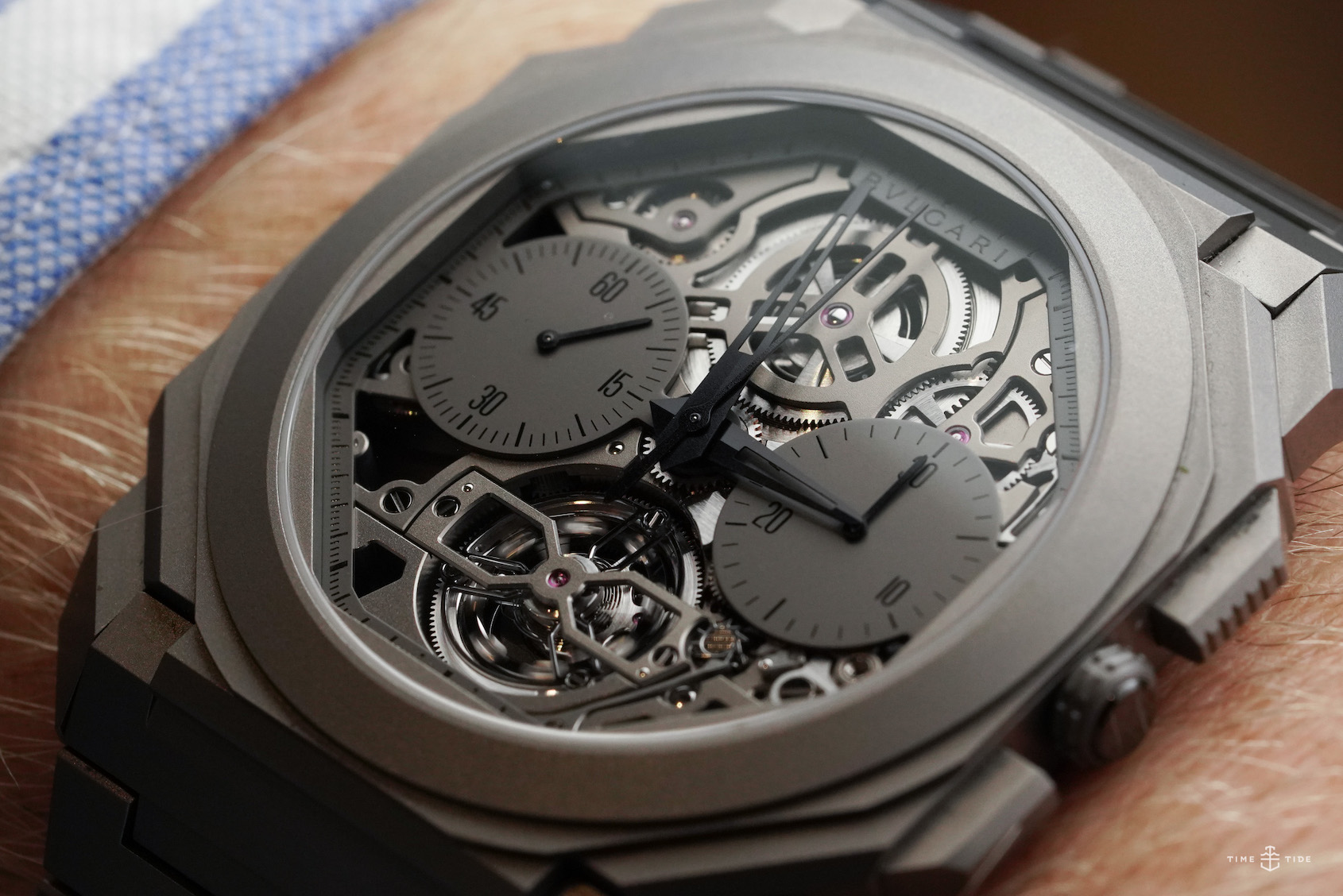 The large, simple sub-dials — aside from keeping a running seconds at 9 and counting the chronograph minutes at 3 — give a perfect amount of respite to the organised chaos that is the flurry of moving gears and springs. The typeface of the numbers is subtly elongated to match the art deco architecture that the Octo Finissimo is renowned for, without being tacky or overtly dated. The lack of hour markers and the skeletonised charcoal hands do make legibility take a back seat, but could you really care what the time was if you were wearing this? 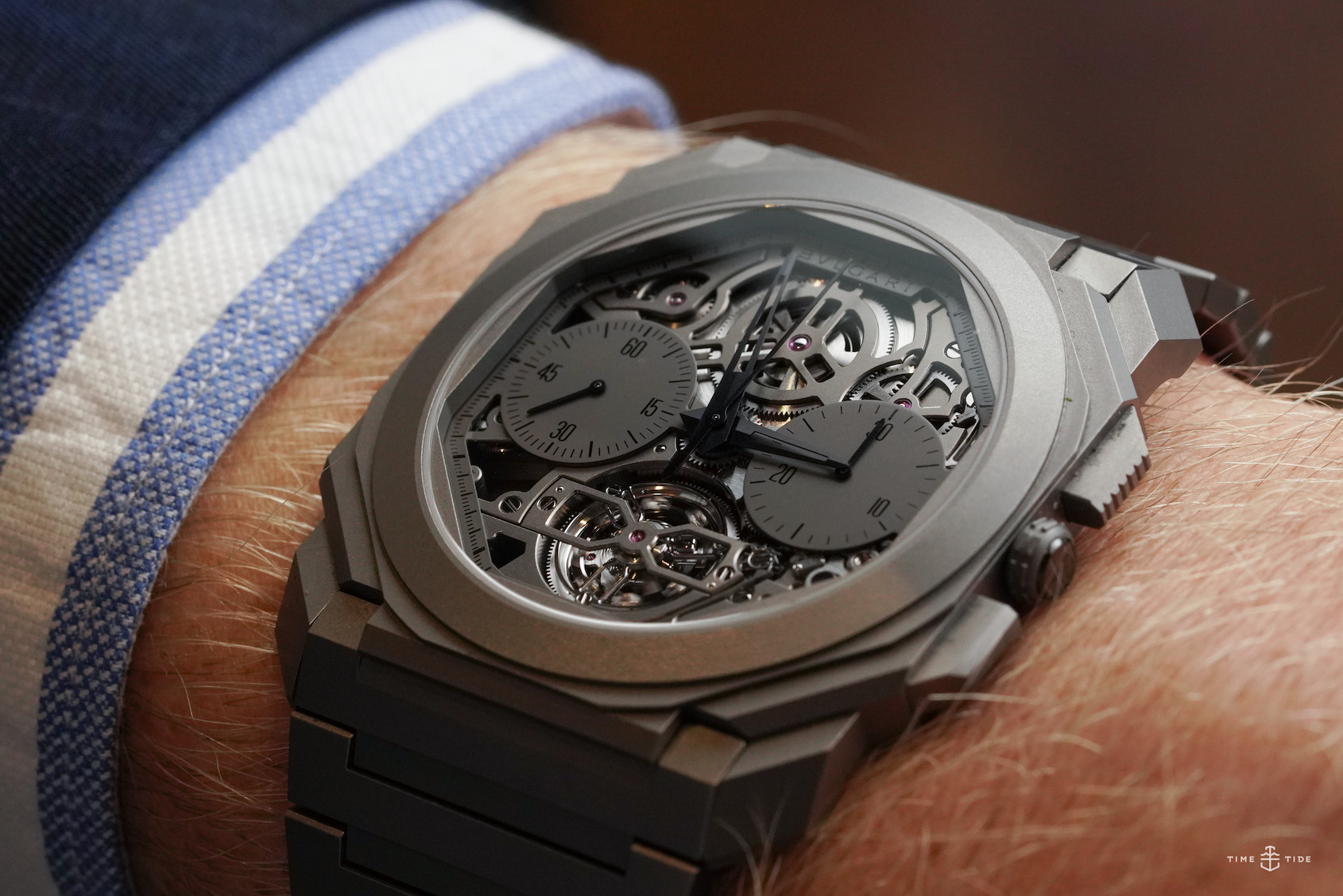 Having been around for six years now, the Octo Finissimo case design is beginning to straddle the line between a new, fresh idea and being a modern classic. 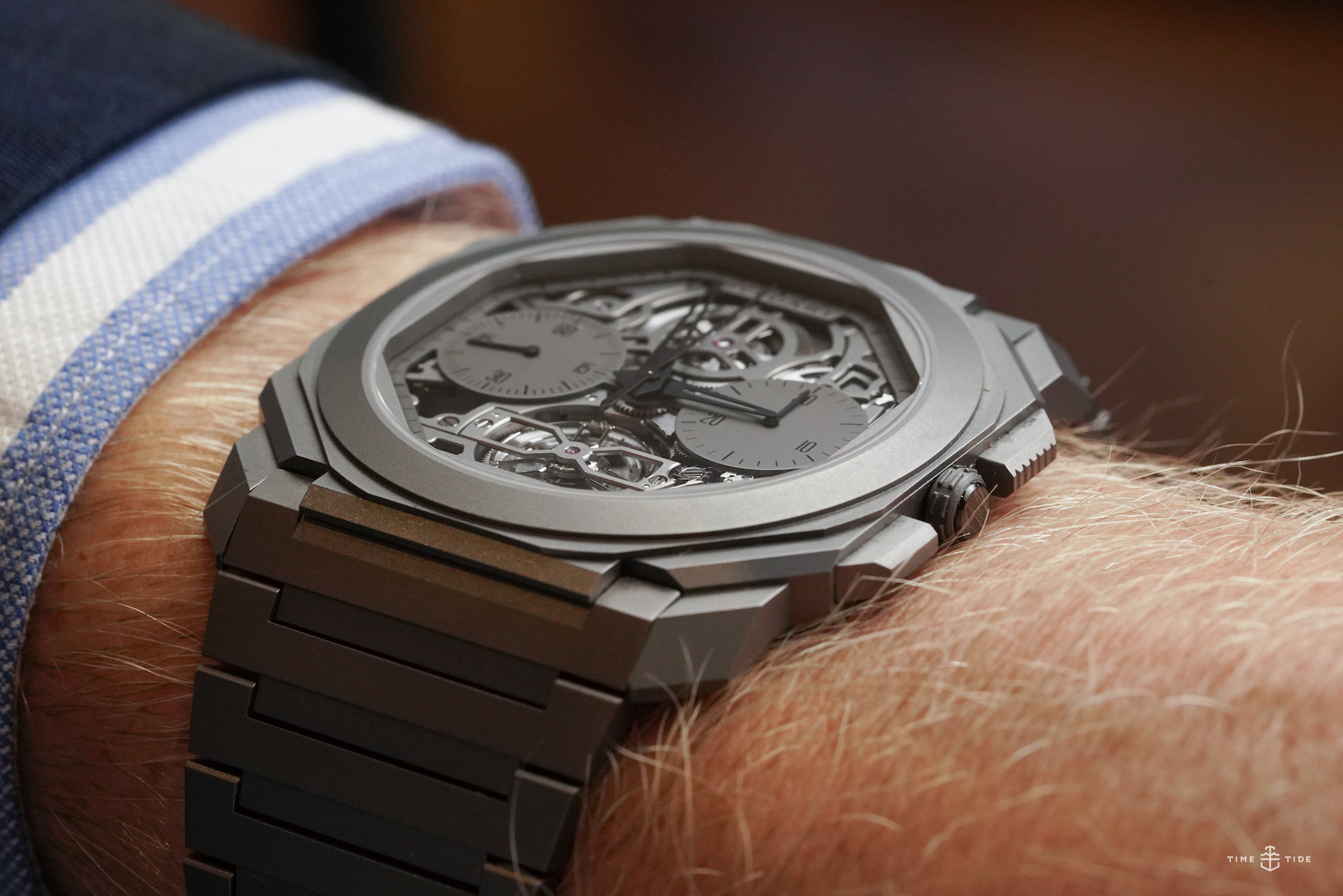 It may still be under constant development, as this Tourbillon Chronograph version suggests, but its embodiment of a 21st century sports watch seems to be going unrivalled. Its sculptural form looks as solid as the Chrysler Building with which it shares some design roots, but while the sandblasted titanium does make it look hewn from cement, its shocking thinness and low density makes it virtually weightless on the wrist, defying the comfort levels anyone could expect from something with so many edges. 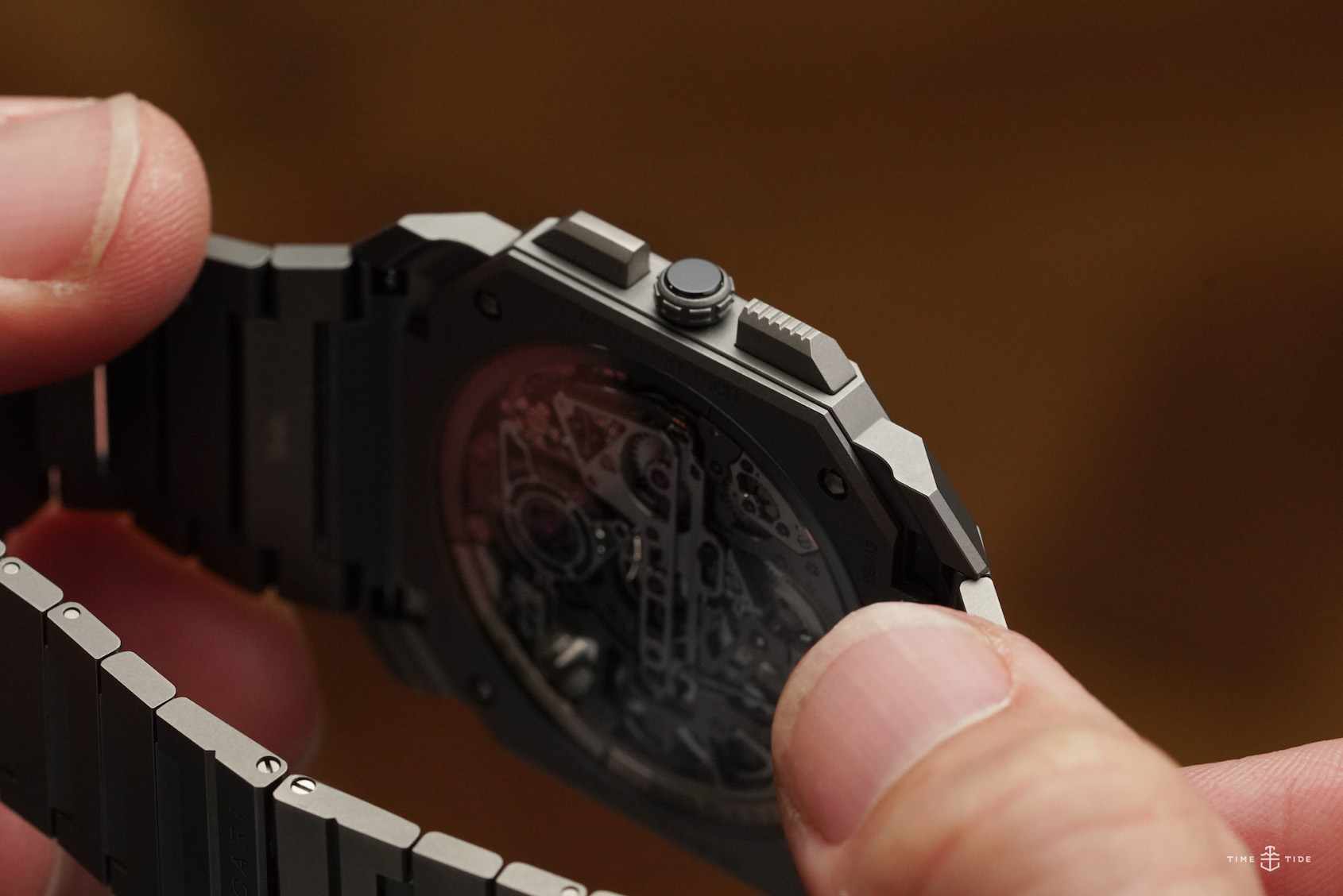 Viewable from both the front and back, the centrepiece of the Bulgari Octo Finissimo Tourbillon Chronograph Automatic is the caliber BVL 388. This movement is a stunning achievement for so many reasons — it boggles the mind why Bulgari aren’t mentioned more often in conversations about the world’s top watchmakers. 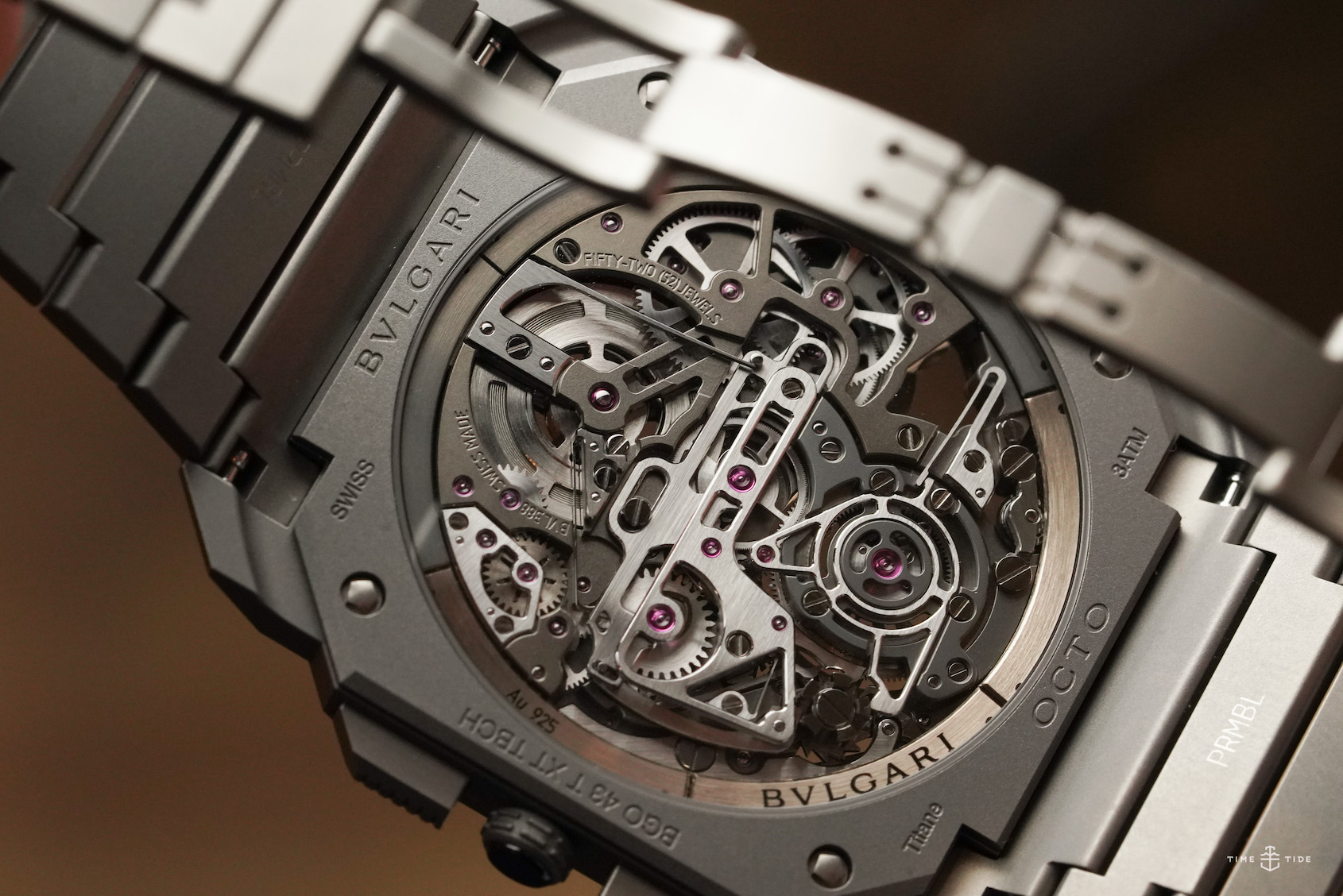 While most tourbillons are considered a bulky complication, especially when given the three-dimensional triple-axis treatment, the BVL 388 manages to be no thicker than 3.50mm. For context, that’s a 23.9 per cent reduction from an ETA 2828 — an industry standard automatic movement with no more than the time and date.

Not only that, but the inclusion of an integrated chronograph and peripheral winding rotor, continually topping up the 52-hour power reserve, means that this watch is the thinnest with those complications in the world. Operating the watch is slightly different to how you might expect, as the chronograph is actually a monopusher — with the top pusher engaging, stopping and resetting the timer. The bottom pusher acts as a crown operation selector, either enabling hand-winding or time-setting. 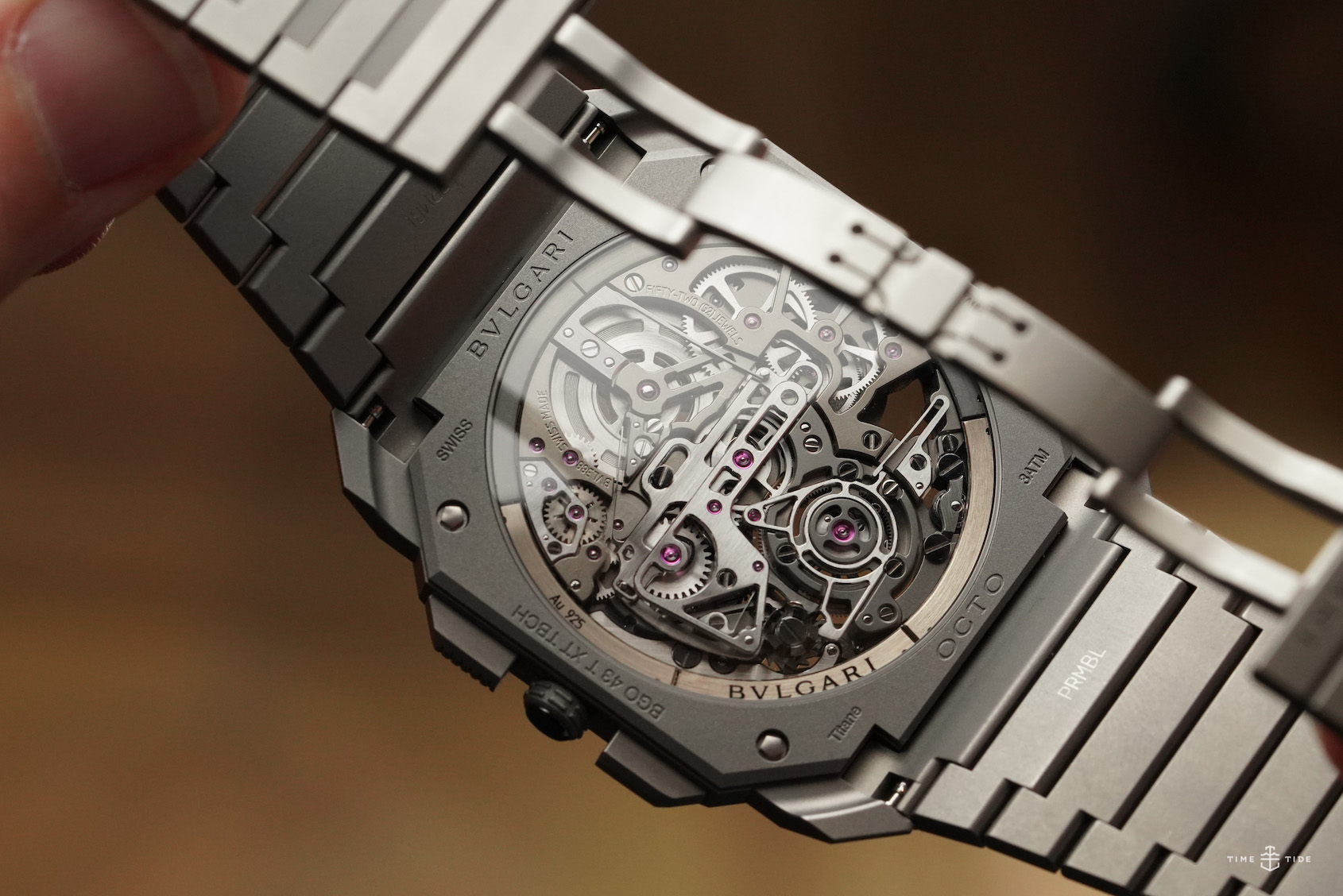 The view from the back is just as entrancing as the one from the front; if anything, changing the appearance from stoic complexity to space-age sorcery. The shimmering brushed-white gold peripheral rotor can be seen among the contrast of the lighter and darker grey tones, which allow many of the 52 purple jewels to glow iridescently. The level of detail in the finishing is clearly thought through, not just having alternating polished and brushed surfaces for the sake of it, but large areas of stippled sandblasting, perfectly horizontal brushing, and high-polished chamfered edges, which ensures every one of the parts can be easily distinguished from its background. 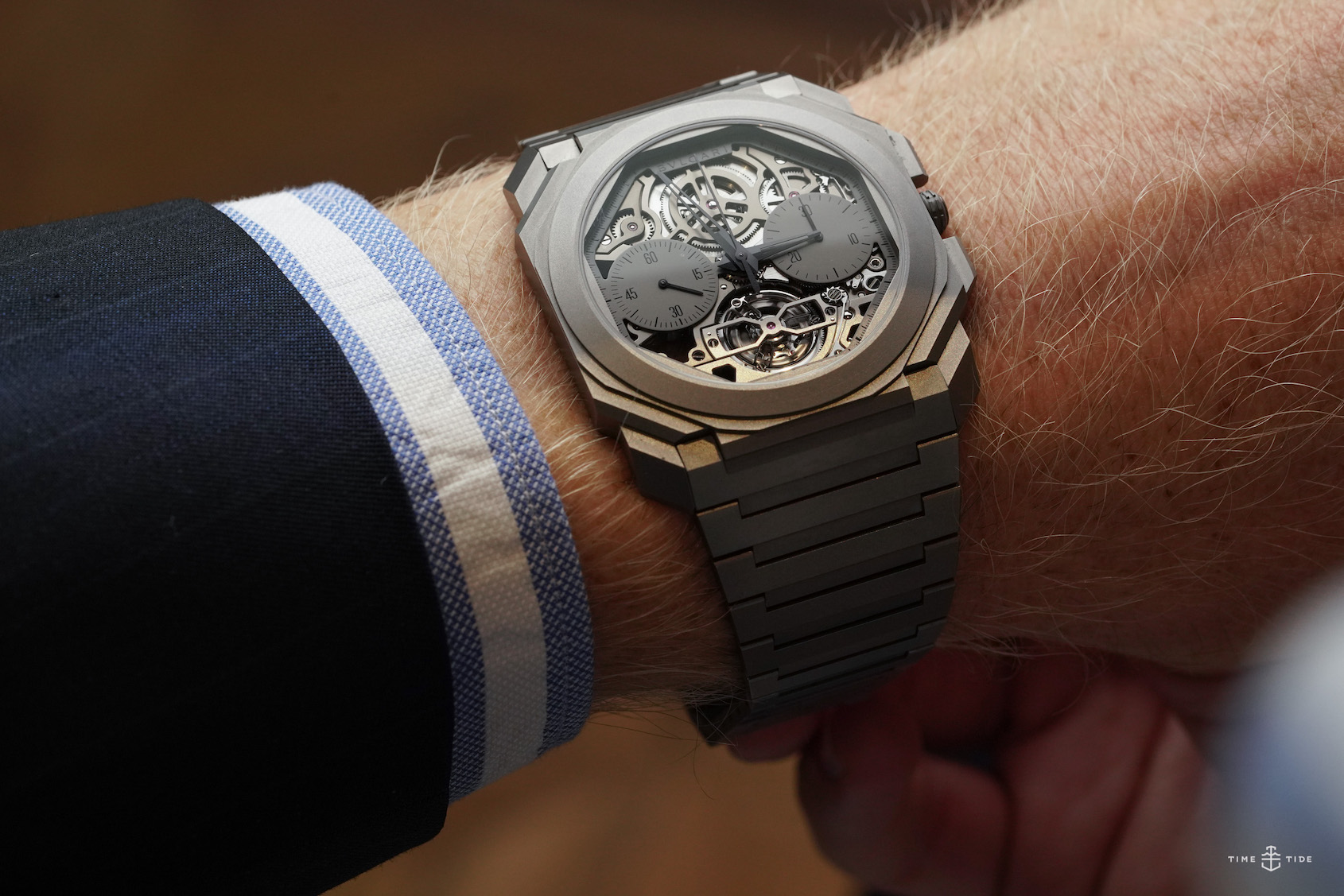 The Bulgari Octo Finissimo Tourbillon Chronograph Automatic redefines what a holy grail watch should be. Not only record breaking in its technical achievements, but also managing to be totally forward-thinking in its architecture without straying from classic philosophies of watchmaking and design principles in general. 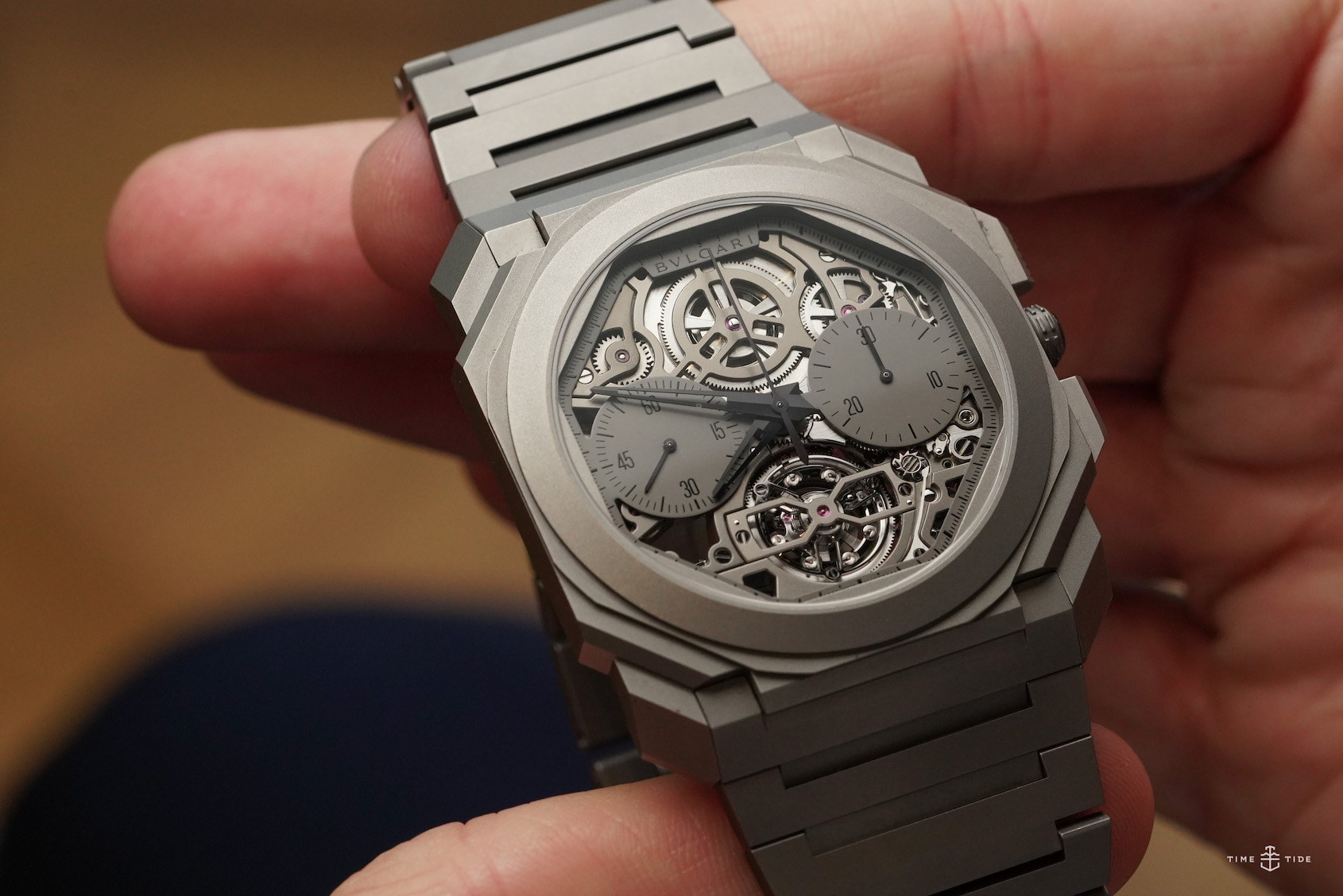 Limited to just 50 pieces worldwide, the retail price of €150,000 shouldn’t be too surprising. If anything, should you be lucky enough to have those kinds of funds lying around, you could consider this watch to be a bargain. Characterful and comfortable, Bulgari have undoubtedly created a piece that will become an absolute icon of 21st century watchmaking. 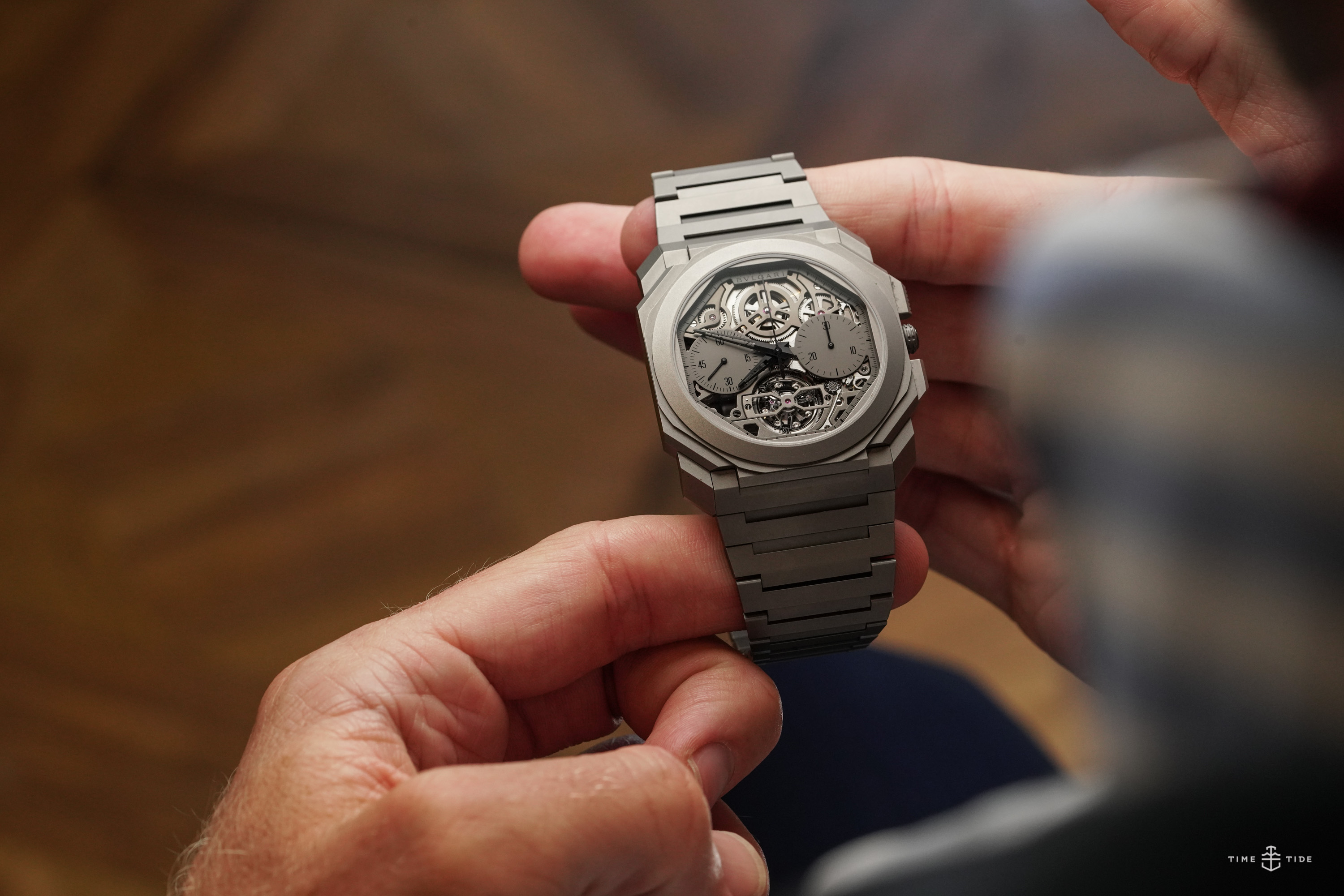 The Bulgari Octo Finissimo Tourbillon Chronograph Automatic is €150,000 and is limited to 50 pieces worldwide.