Before we get into the meat of this, it goes without saying that there’s no love lost between me and the average Omega Speedy. Yes, I absolutely have to (and do) respect their history, what they have done for the mainstream popularity of quality watchmaking, and so forth … but, generally speaking (with the exception of the MkII and a handful of more obscure references), the countless modern references of Speedmaster out there just don’t do anything for me. But then I saw the Apollo 8 and thought, “OK, maybe ONE more version won’t be the end of the world …” 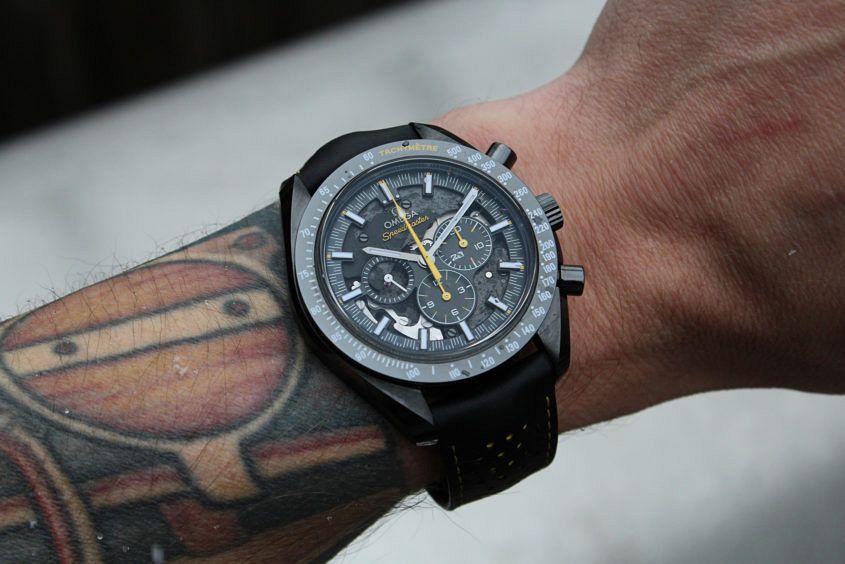 The Apollo 8, from the get-go, is my kind of odd duck. Between its unique partially cutaway dial, bright yellow accents, a ceramic case, a specially modified hand-winding calibre, there’s a lot going on here that ensures this piece isn’t your average Speedmaster dial variation. Its design is a tribute to the Apollo 8 mission that orbited the moon, and, as you can see from the imagery, there’s a lot of “moon-ness” to its design. 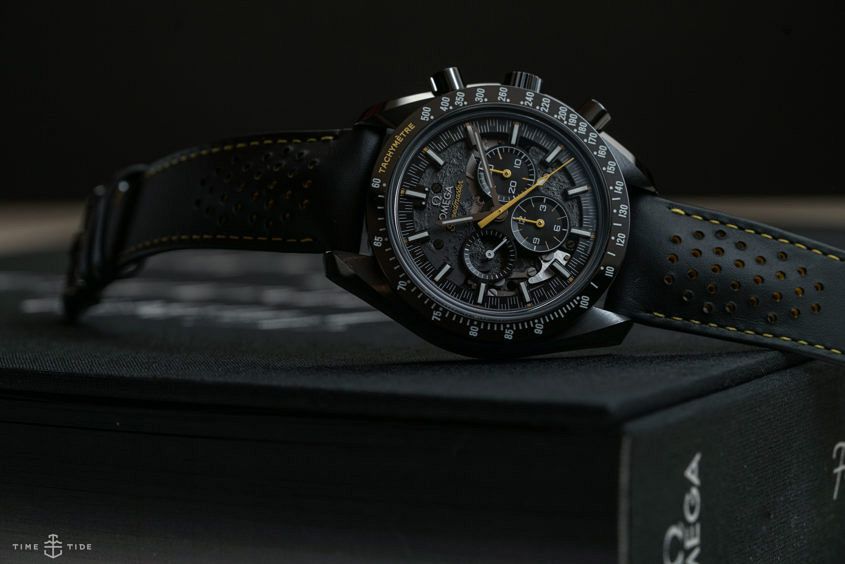 Though it’s still a larger 44.25mm diameter case — a far cry from the more svelte OG Speedies — it is a touch thinner than most of its siblings on account of the calibre choice (2.5mm thinner, at 13.8mm thick, if you’re wondering). The two biggest hurdles I cannot get past with Co-Axial Speedmasters is the thickness of their cases, and the stacked hour/minute chronograph subdials that impact legibility, and the Apollo 8 puts both of those issues to rest in one fell swoop. Three registers, and a case that can just about tuck under a shirt cuff (in a pinch), give the Apollo 8 an upper hand straight out of the gates. Functional fun aside, the dial and movement finishing of the Apollo 8 are a real treat. What appears initially as part of the dial is effectively the calibre’s mainplate, which has been blackened and then “laser-ablated” (per Omega documentation) in order to depict an interpretation of the moon’s surface. Out back, the balance cock and a few bridges have been treated with the same process. While these changes have zero impact on running performance, the added contrast plays a major role in altering the appearance of Omega’s calibre 1869 (basically a reference 1861 with this altered decoration). 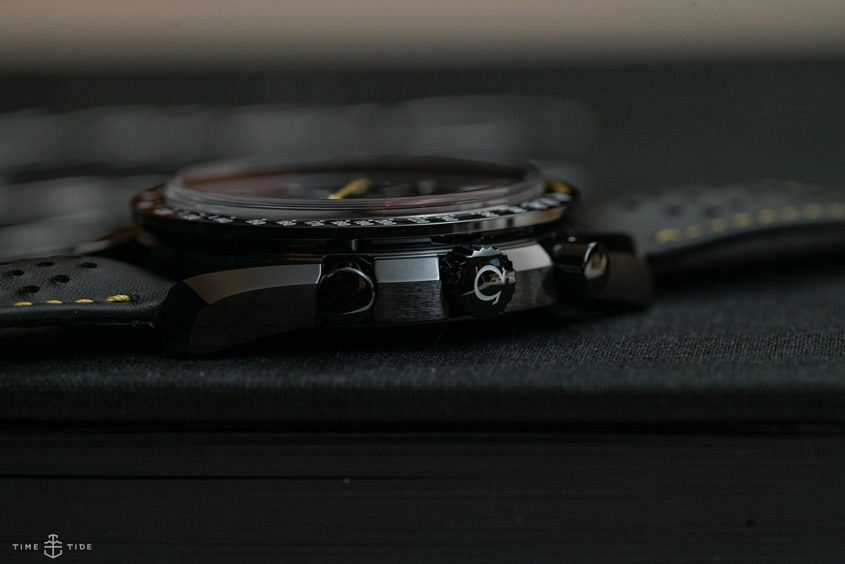 Black cases, in general, have a tendency of making a watch appear a touch smaller on the wrist than their stainless steel siblings, and when combined with the added lightness of ceramic, its physical and visual heft is almost misleading. Don’t get me wrong, you’re not looking down and thinking this is a 42mm reference 145.022, but it’s by no means as overbearing as its Co-Axial cousins. As a finishing touch, its supple perforated leather strap with contrasting yellow stitching is quite comfortable, and pulls the aesthetic package together wonderfully. The fact that they finish it off with a matching ceramic buckle is just icing on the cake. 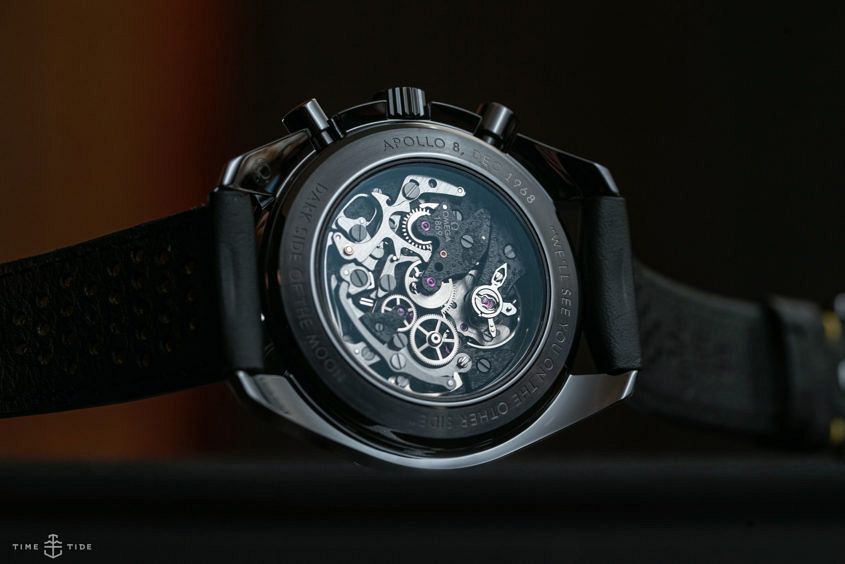 So at the end of the day, has Omega converted me into a Speedy lover? No. Have they put an offering on the table that I can objectively look at and say, “I wouldn’t mind having one of those, and would happily recommend one to someone else”? I think I can safely say yes to that at the very least. 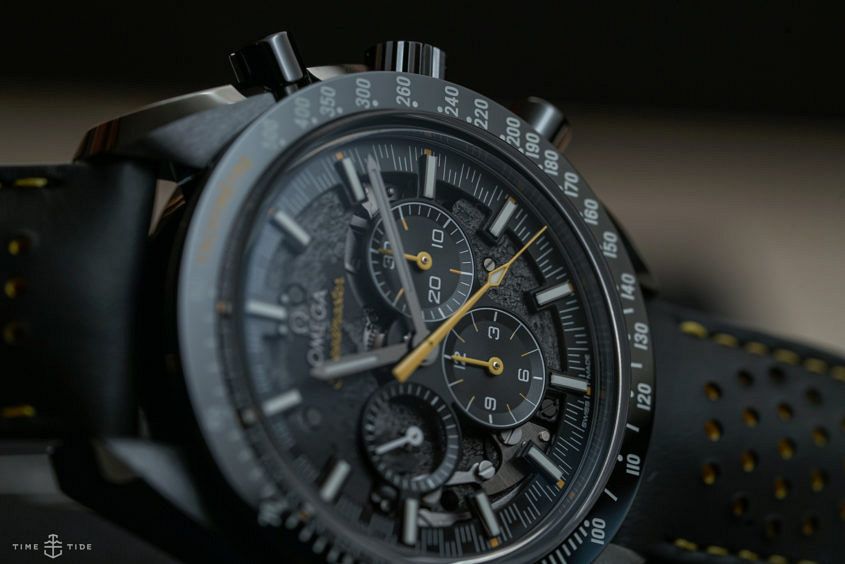