The Louis Vuitton Tambour Curve Flying Tourbillon Poinçon de Genève is an unabashedly large futuristic dark metropolis under sapphire. I see an angular maze-like horological architecture within an organic patterned cutting-edge composite case. Hypnotised by the 9 o’clock rotating magic of the Flying Tourbillon you’ll notice it being delicately cut into the dark and recognisable structure of the LV logo. 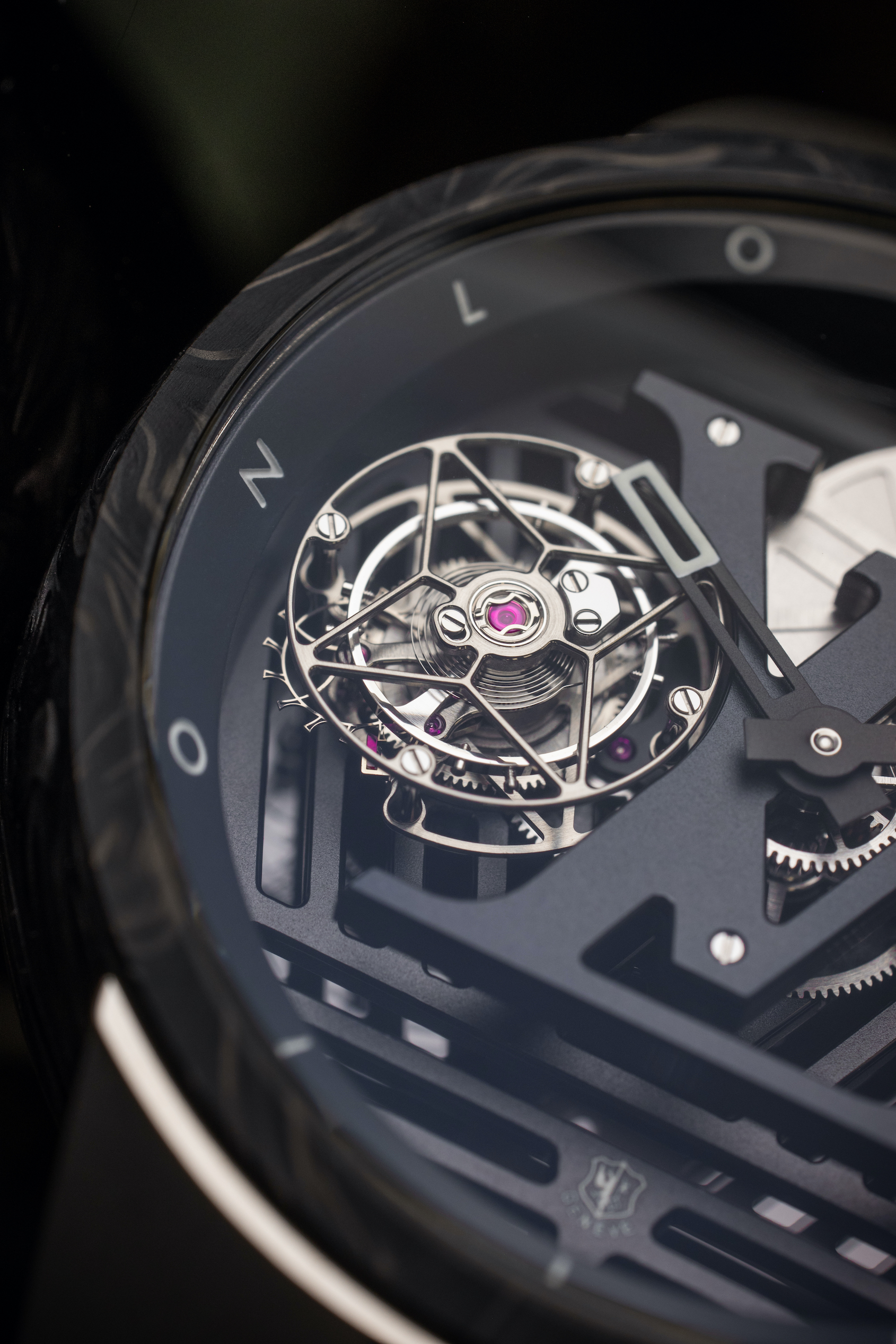 The dial – or is it the movement? 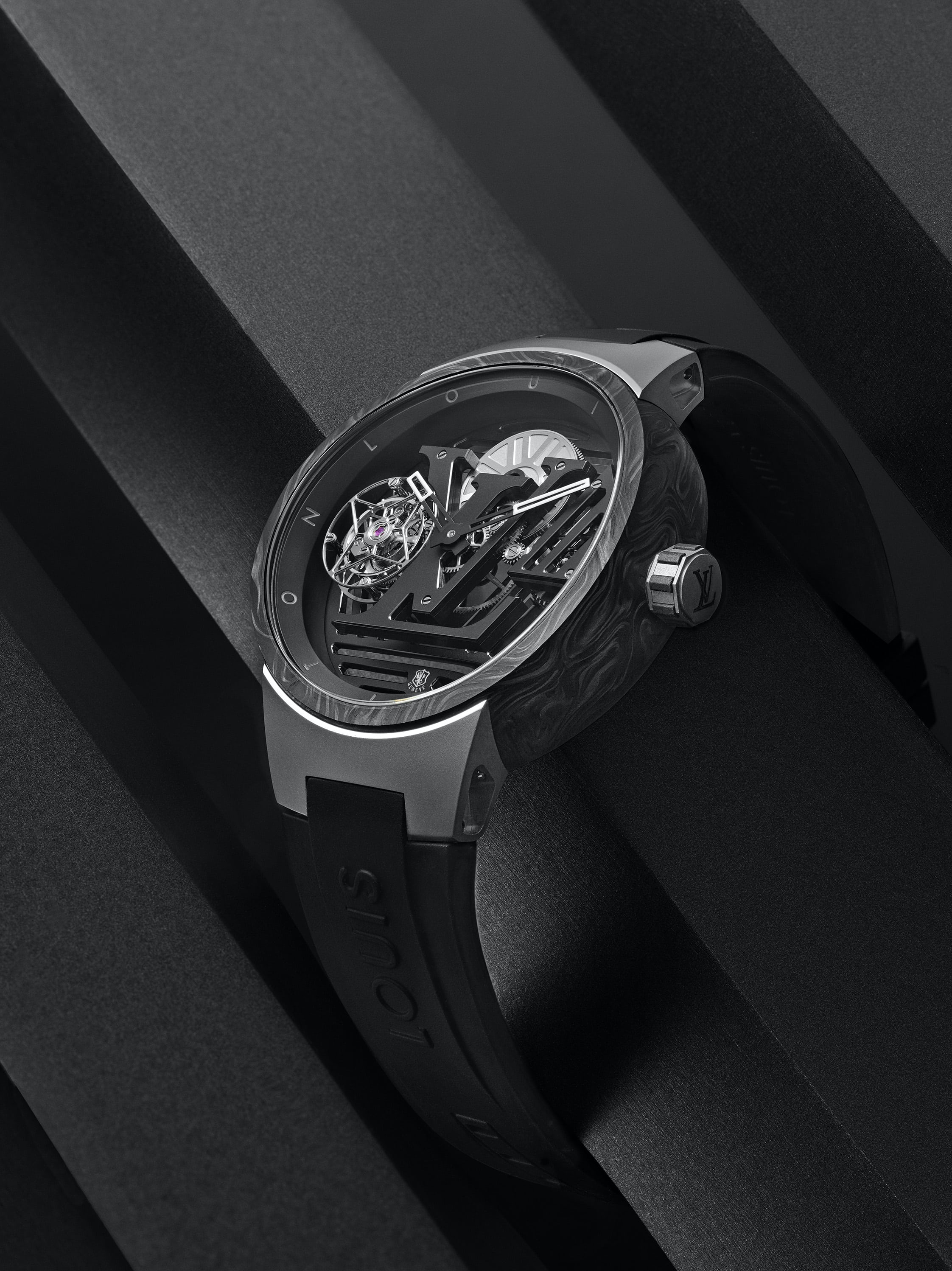 The dial complexity is such that the LV signature – bold and large within an intriguing depth of openworked haute horlogerie — becomes a natural part of the movement architecture. It is almost as if the movement construction itself has dictated the shape of the recognisable overlapping L and V. This is, in my humble opinion, easily the best integration of a logo within a dial for the last 10 years, but this watch is so much more than what merits this irrelevant prize. 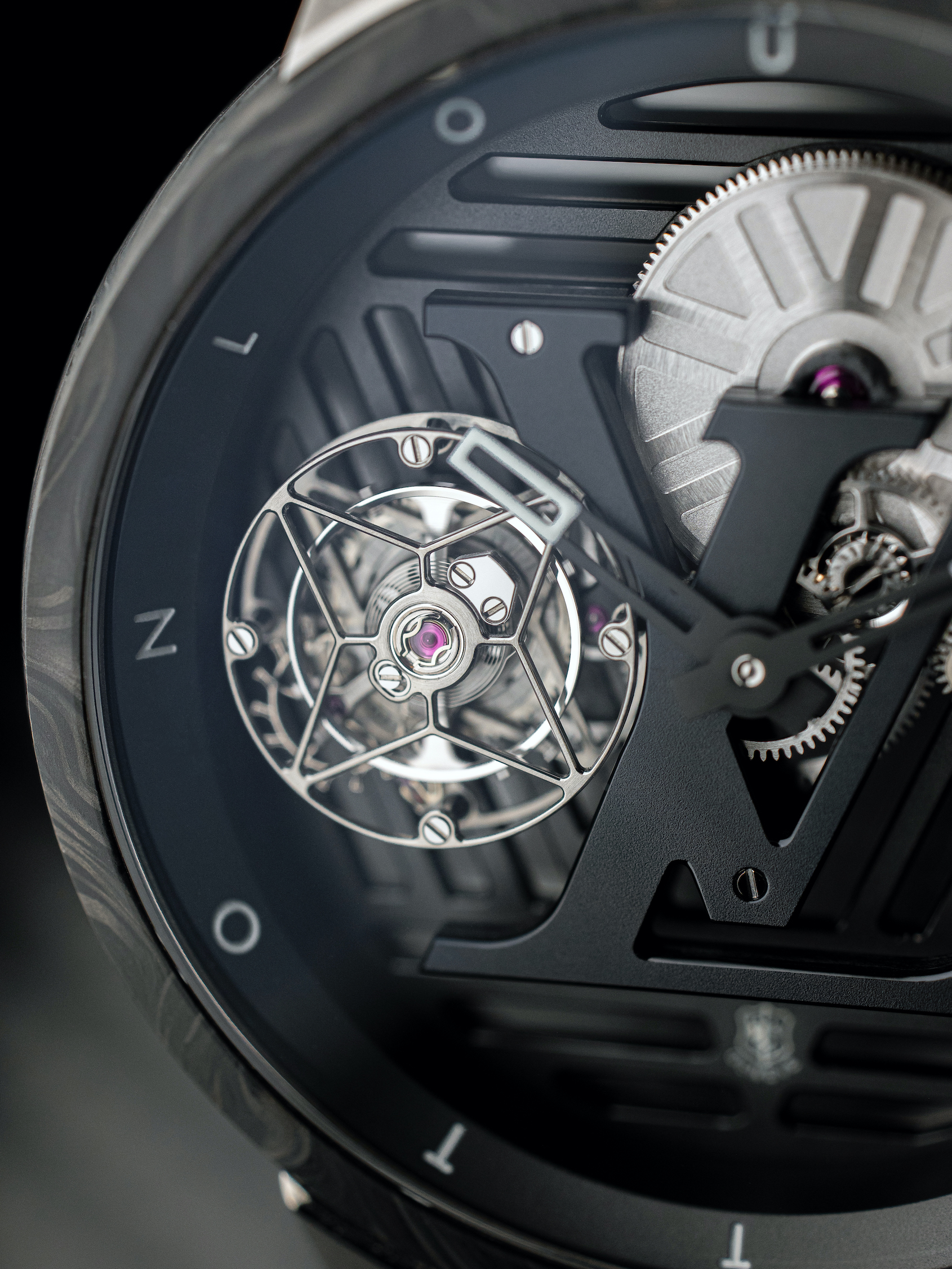 If we work our way in from the bezel-less design, we have a discreet dark sweeping rehaut, which is a reminder of Louis Vuitton’s luck of the draw – the only manufacture with exactly 12 letters in their name, elegantly substituting the hours, engraved and lacquer filled. The Geneva Seal at 6 o’clock lets us know that this is cutting-edge futurism, but with a deep traditional twist. The intricate architecture may look insistently futuristic and darkly industrial, yet everything from chatons to anglage is of the same delicately detailed finish as a traditional Côtes de Gèneve-striped hand-wound calibre. And therein lies part of the beauty in this imposing darkness.

The movement – or is it the dial?

A slotted base lays the foundation for the openworked movement, these slots perfectly mirroring the angles on the serifed LV font when viewed straight on, should you manage to avert your eyes from the star-shaped flying tourbillon, the absolute prima donna on this dark stage. The design is utterly fascinating, with the multi-layered intrigue challenging even a complex sense of watchmaking. The underlying integrity of the design process is clearly visible, the tourbillon rendering me in a quiet trance-like state.

The LV 108/9 caliber powering the Tambour Curve Flying Tourbillon runs at 21,600 vph, with a solid 80-hour power reserve. In this case (no pun intended) we need no turning of the watch to see it, as it is intricately linked within the girder-like construction of the LV logo. This integral bridgework is treated with NAC, non-amorphous carbon, giving it a black slightly textured structure. This would be enough for most maisons, having this spectacular presence inside a traditional steel or gold case, but not LV.

The case and strap

The gently curving organic case hides a complex materiality, resulting in yet another fascinating aspect of this halo piece of watchmaking. I will admit that this hands-on is very much so, as actually leaving it unfondled on the wrist to do its job seems a shame, so it spends most of my time being carefully examined as yet more details unfold. 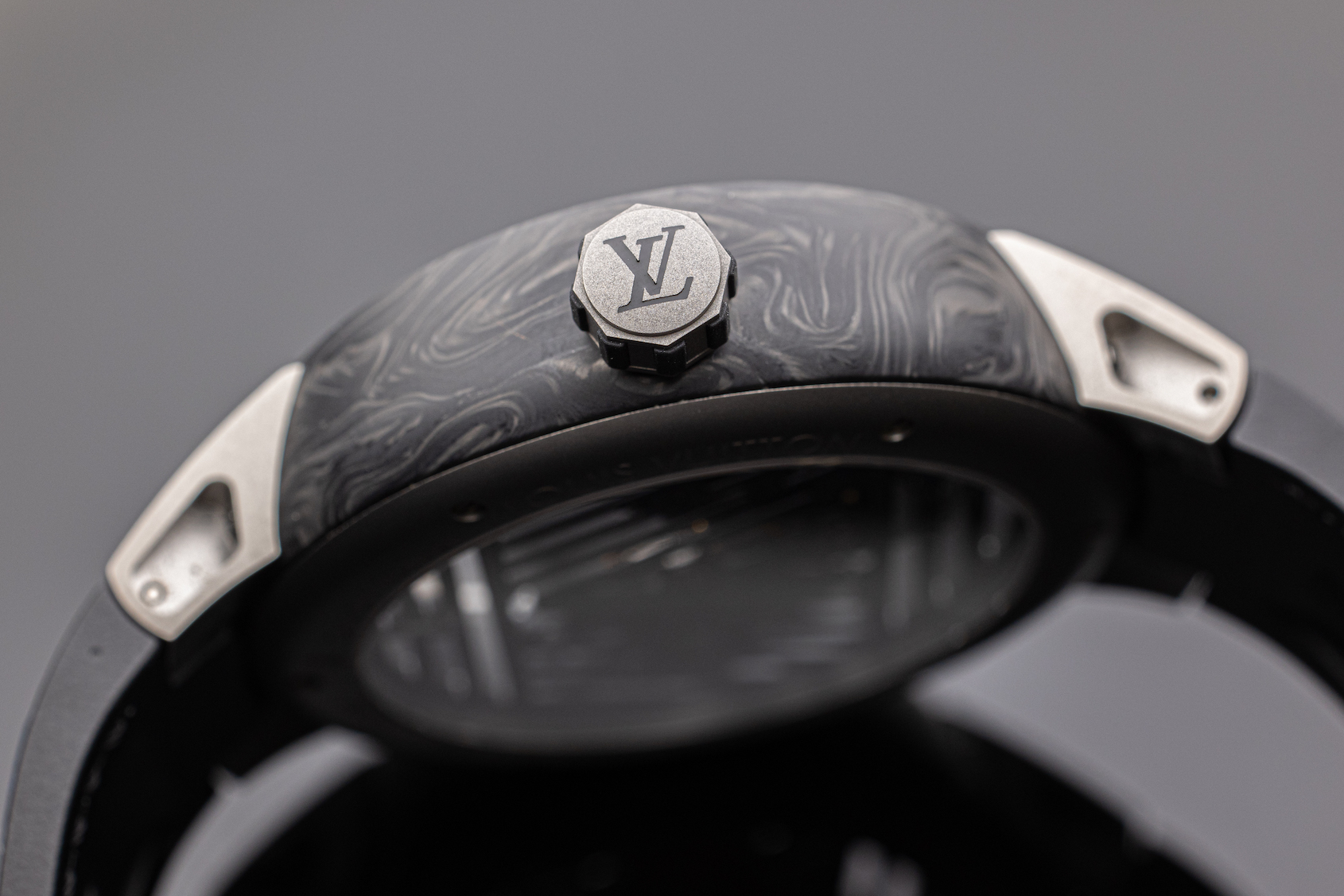 The tambour (small drum) case is not exactly svelte at 46mm, sloping inwards at the bezel-less top to 42, but with 12.75mm impressively housing the three-dimensional movement theatre within. On the wrist, with its weapons-feel blunt titanium lugs, it sits comfortably – and with a smooth velvety feel of the unexpected marble-patterned case. The organic shape and pattern hides the complex proprietary carbon-fibre composite CarboStratum, made up of 100 sheets of carbon fibre, heated, then compressed to form this fascinating swirly pattern. The crown is a bold titanium octagon with a black LV-monogram, befitting the tough complexity of the watch with inset black details.

There is genius at play with this soft, dazzling and organic shape juxtaposed with the tough titanium lugs – and hiding what is an inner titanium case protecting the movement. The soft rubber strap is a sporty yet perfect choice for what is a tough and futuristic vibe, with a brilliant contrast in the skeletonised flying tourbillon.

Once I managed to take this off my wrist I was left with the impression of an unstoppable force within Haute Horlogerie at Louis Vuitton. The Tambour Curve Flying Tourbillon Poinçon de Genève is a serious case in point. A perfect juxtaposition of dark complexity within the organic shape of a silken marbled case and a slowly turning spectacle at 9 o’clock. Only now do I notice that yes, there are hour and minute hands – black square-edged batons with the latter half being Super-LumiNova coated. The passage of time seems somehow less important than the delicate dance of the flying tourbillon.