While much of the Longines Heritage collection released this year has been brand new pieces, we have also been treated to an update to an existing model, the Longines Flagship Heritage black dial. The previous expression was released last year to rave reviews from the watch world and featured a charming cream-coloured dial, the warmth of which subtly complemented the gold-tone hands and hour markers. With the addition of this new black dial reference, Longines offer a slightly more understated watch that bears all of the same attractive vintage cues. 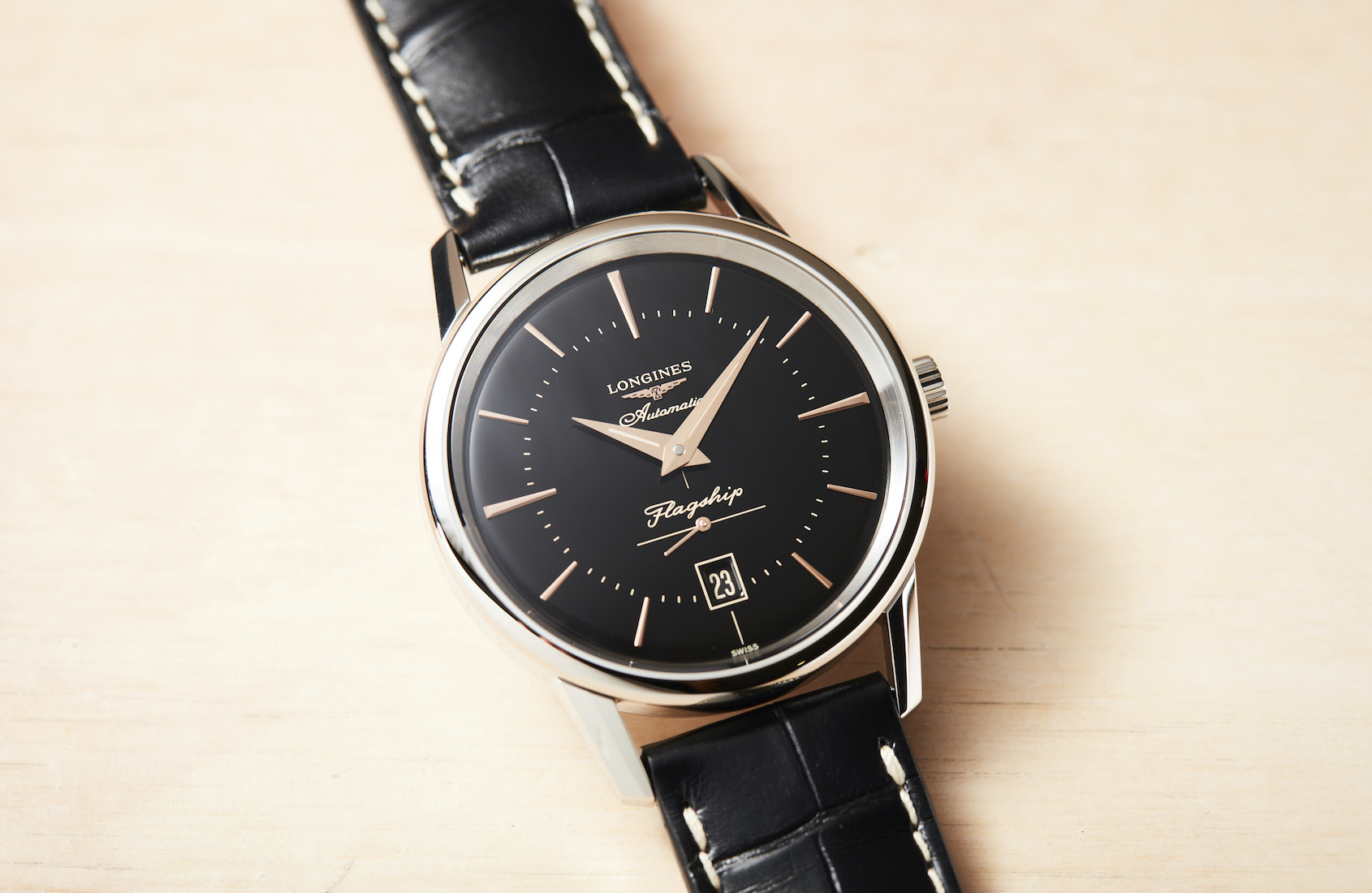 Inspired by the Longines Flagship watches of the 1950s, quintessential watches of the time that could easily be imagined glinting under the cuffs of dimly lit jazz-bar goers, the modern Longines Flagship Heritage is a distillation of the suave seriousness of a mid-century dress watch. The very first Longines Flagship was released in 1957, a time when the Jules Verne classic Around the World in Eighty Days captured the popular imagination and Elvis Presley dominated the airwaves, and is a period of nostalgia that the contemporary interpretation of the Flagship successfully arrests. 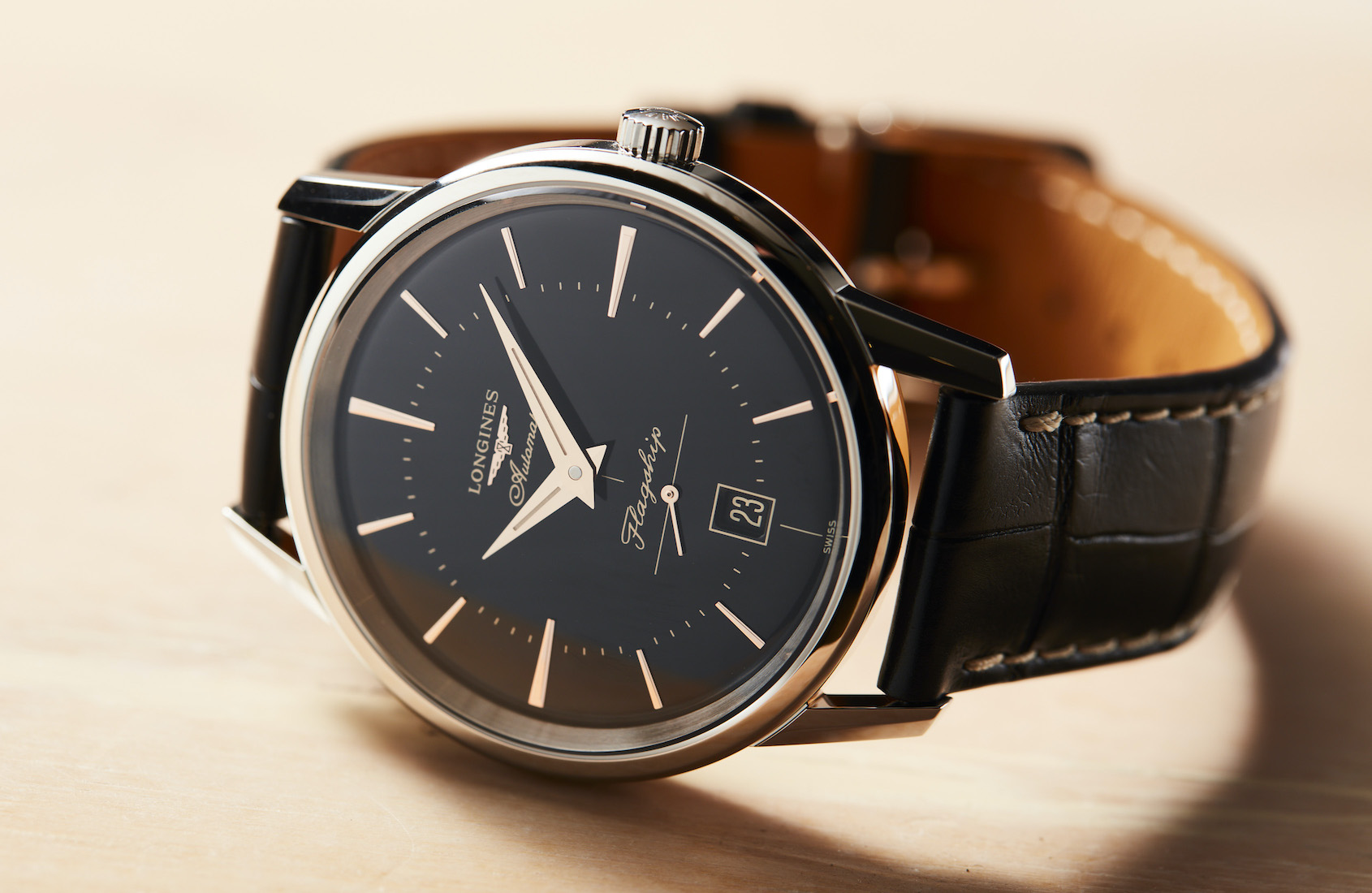 Featuring a 38.5mm steel case and sitting only 10mm off the wrist, the Longines Flagship Heritage with a black dial sits firmly in the Goldilocks zone of case proportions, as well as remaining true to watch sizes from the middle of last century. The polished case features the long and pronounced lugs that we are used to seeing from Longines, making it suitable for larger wrists than the case diameter might initially suggest. 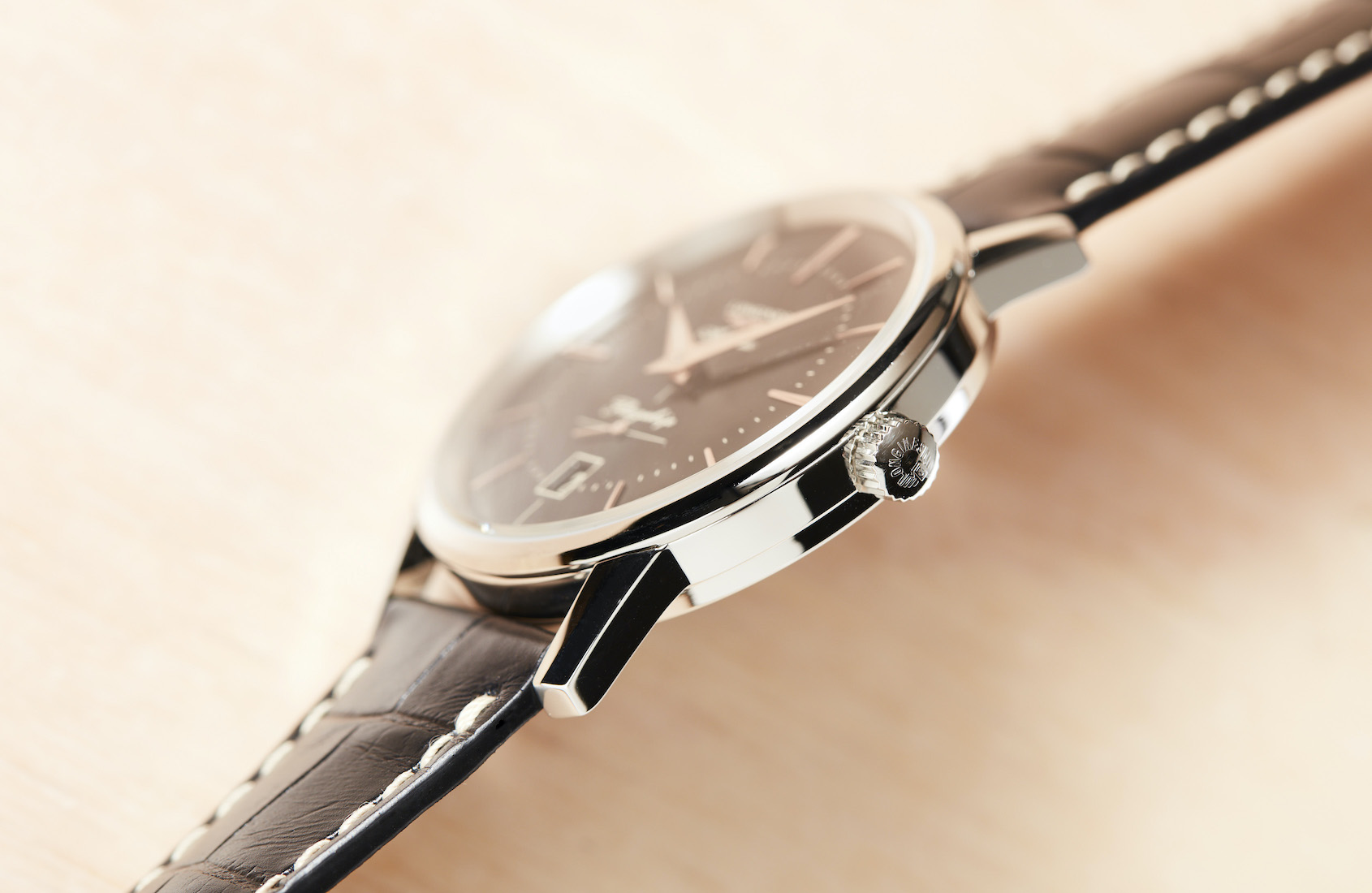 Focusing our attention on the updated element in this reference, the black dial has a gloss to it that draws the eye and delivers a strong contrast against the pink gold hour markers and toned hands. The applied winged hourglass Longines logo sits just above the dial, adding additional depth to it. At the 6 o’clock position, Longines has included both a date window and a small seconds complication, delivering a package that is both practical in the day-to-day and balanced in its design. 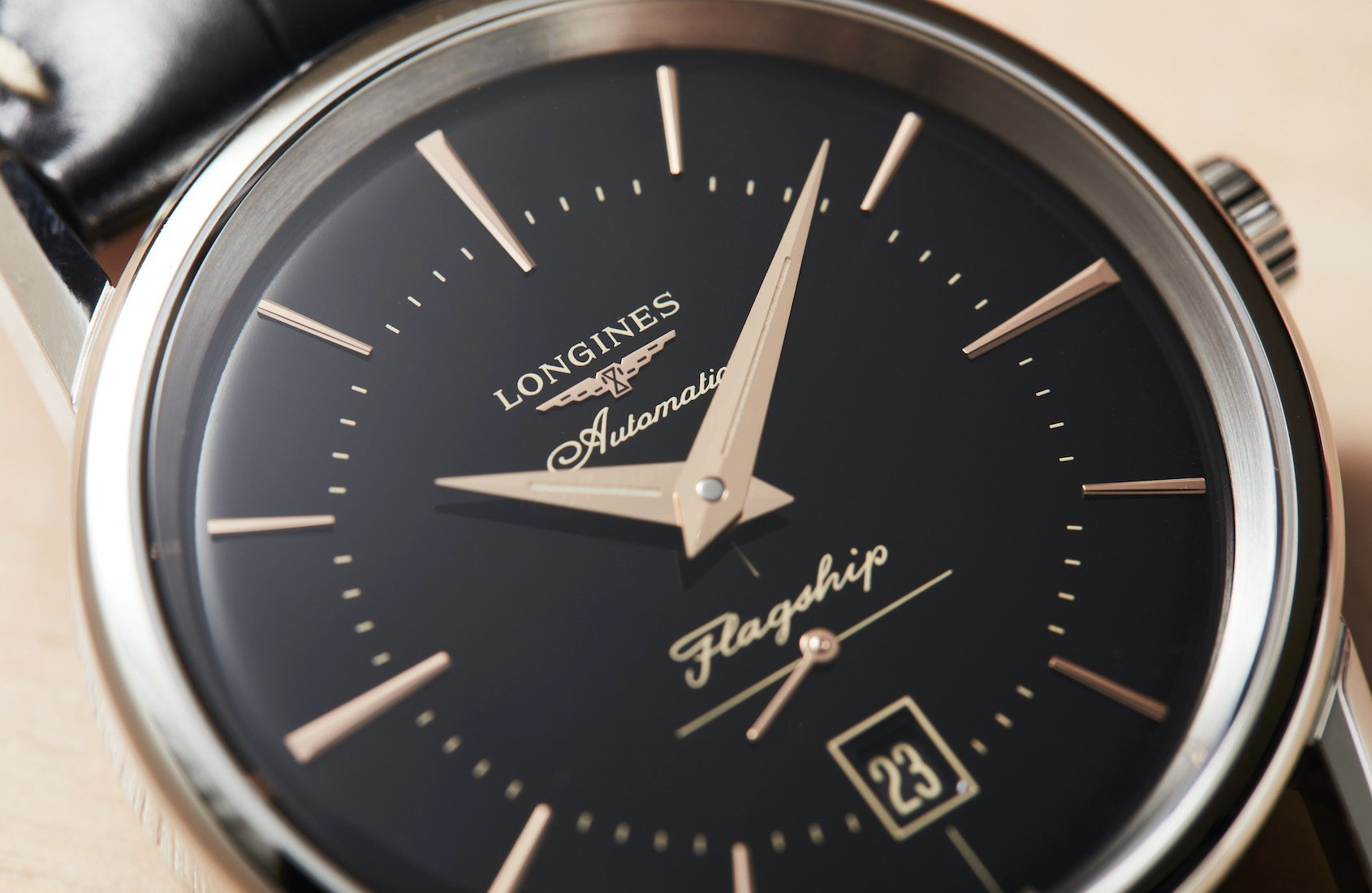 Another genuinely attractive feature is the blue and gold medallion that can be seen on the solid caseback of the Longines Flagship Heritage, which depicts a 17th century merchant ship that the watch is named after. The blue, which contrasts so nicely against the gold ship, is an almost liquid-looking enamel, a material very rarely seen at this price point. 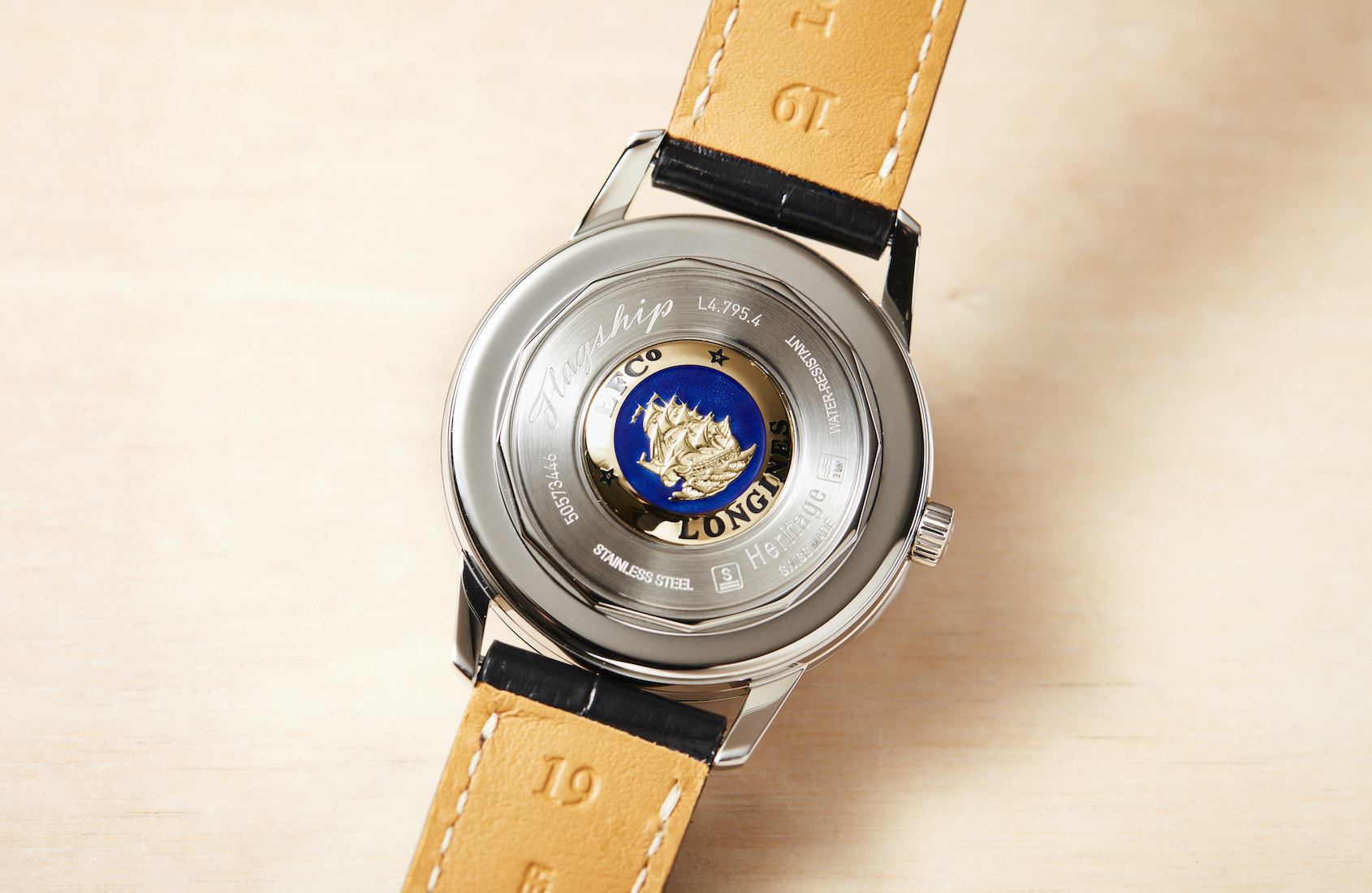 Hidden beneath the enamel waves is the Longines automatic caliber L615 that powers the watch, ticking away at 4Hz and offering a respectable 42 hours of power reserve. The Longines Flagship Heritage arrives on a black leather strap with contrasting white stitching and is secured with a steel pin buckle — exactly what you would hope for from a watch inspired by the 1950s. 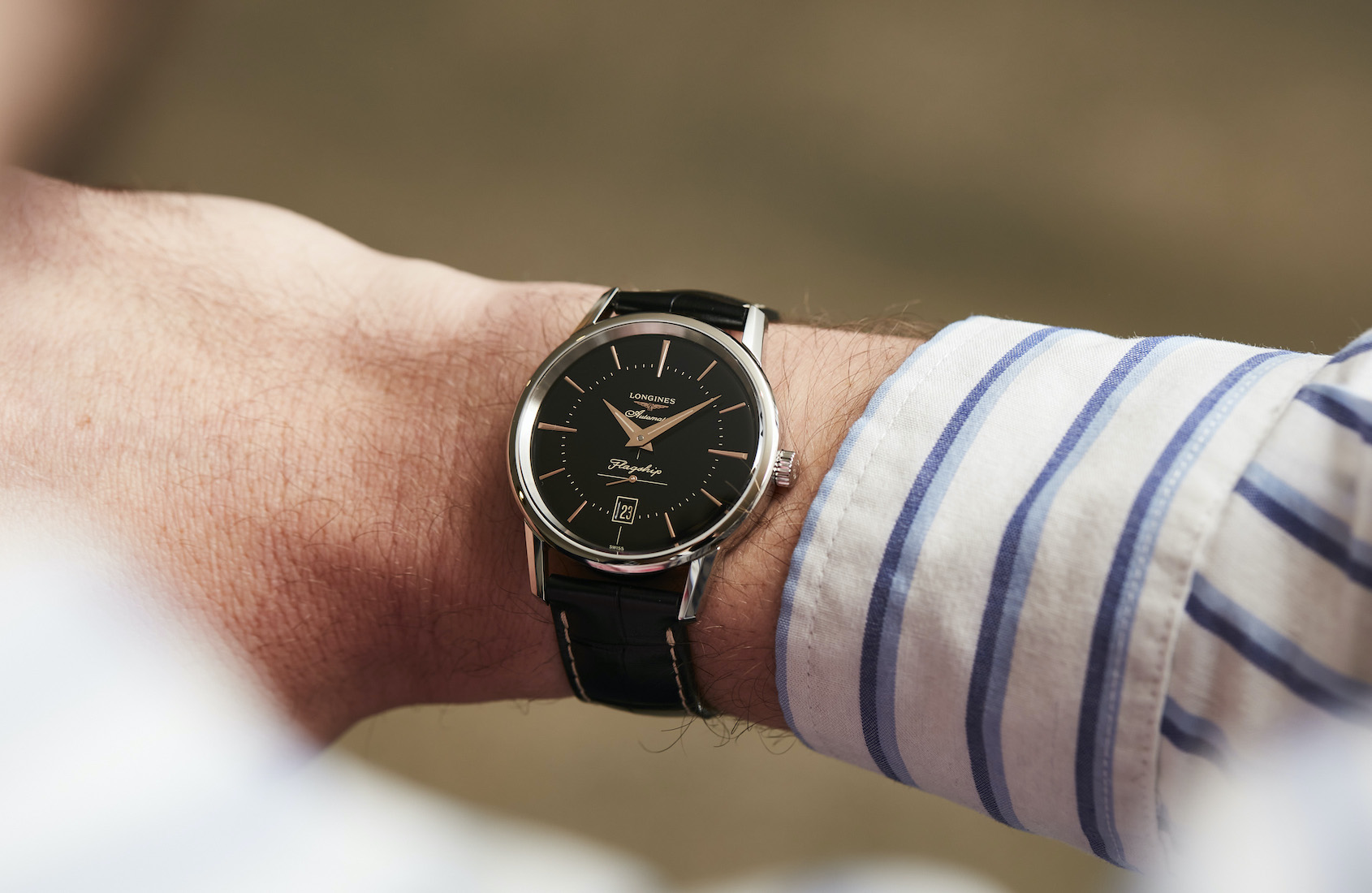 While the Longines Flagship Heritage with a black dial certainly isn’t breaking new ground in watch design, it isn’t trying to. It offers some of the best of dress watch design in a genuinely wearable and practical package, and does so at a price that should delight anyone interested in the golden age of watchmaking design.

The Longines Flagship Heritage has an Australian RRP of $2350 and is available from Longines boutiques and retailers, as well as their online store.