The hypnotic dial of the Minase Divido Shibo-Urushi

Although watchmakers have been experimenting with artistic techniques in dials for centuries, it feels like the surface has barely been scratched when it comes to the creative techniques that can be utilised. There’s seemingly infinite room for experimentation and exploration of new ideas. The Minase Divido Shibo-Urushi takes the rare concept of a urushi lacquer dial and expands it with a blast of colour, presented in a futuristic shell that announces its artisanal origins. 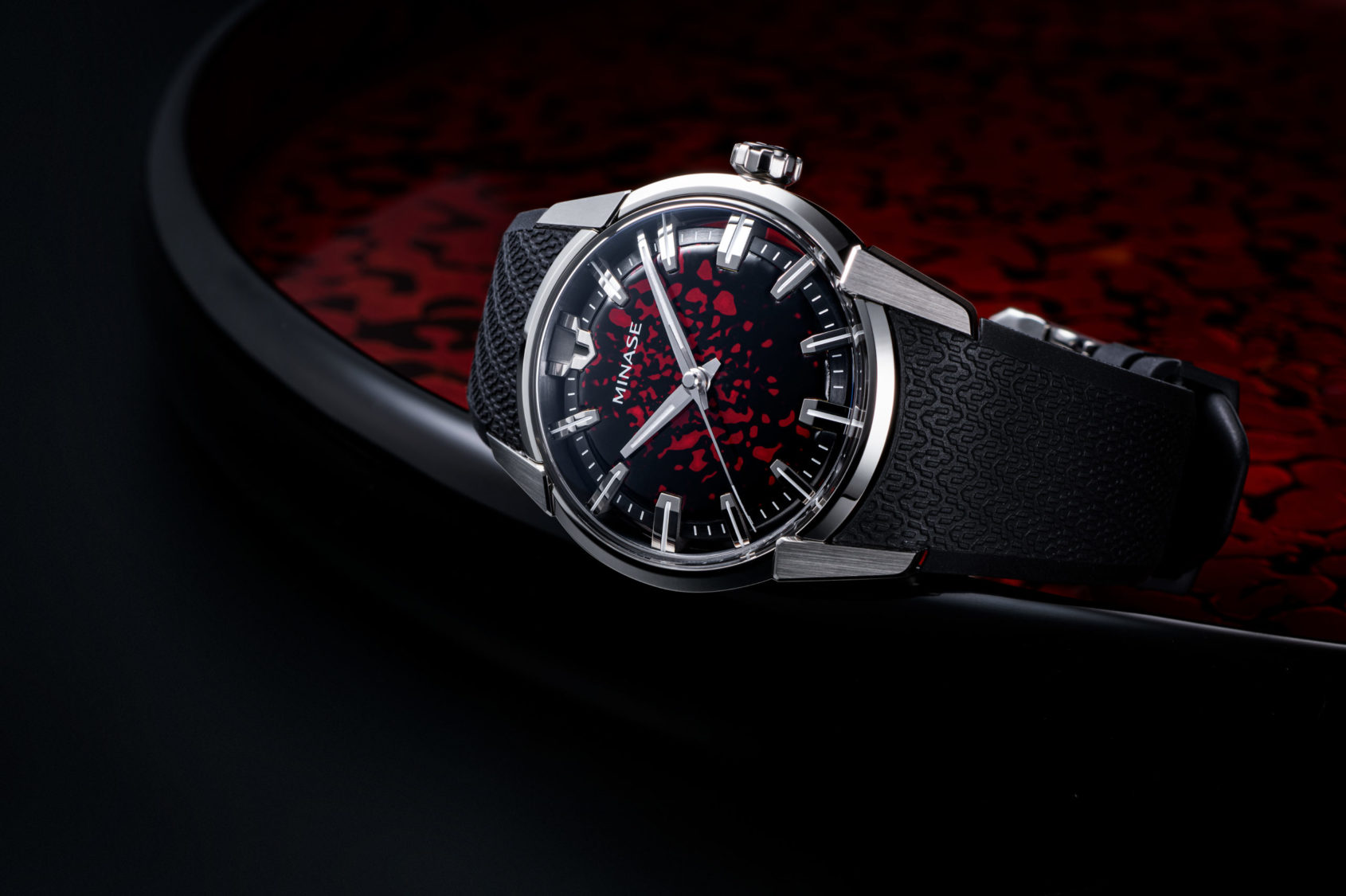 Japanese lacquerware is by no means new, with the oldest known examples dating as far back as 7000 BCE. It’s not novel to watchmaking either, with companies such as Seiko and even Undone having released urushi dials before. The process begins with the Japanese lacquer tree, which is tapped to harvest its dark sap that can naturally form a beautiful, hard and waterproof coating. The sap is then filtered for impurities before it’s ready to be hardened in a warm, humid environment. The most difficult consideration with urishi is the toxic nature of the sap, containing a high level of urushiol that can cause extreme rashes from the vapours alone. This is the same compound which makes poison ivy and poison oak so nasty. 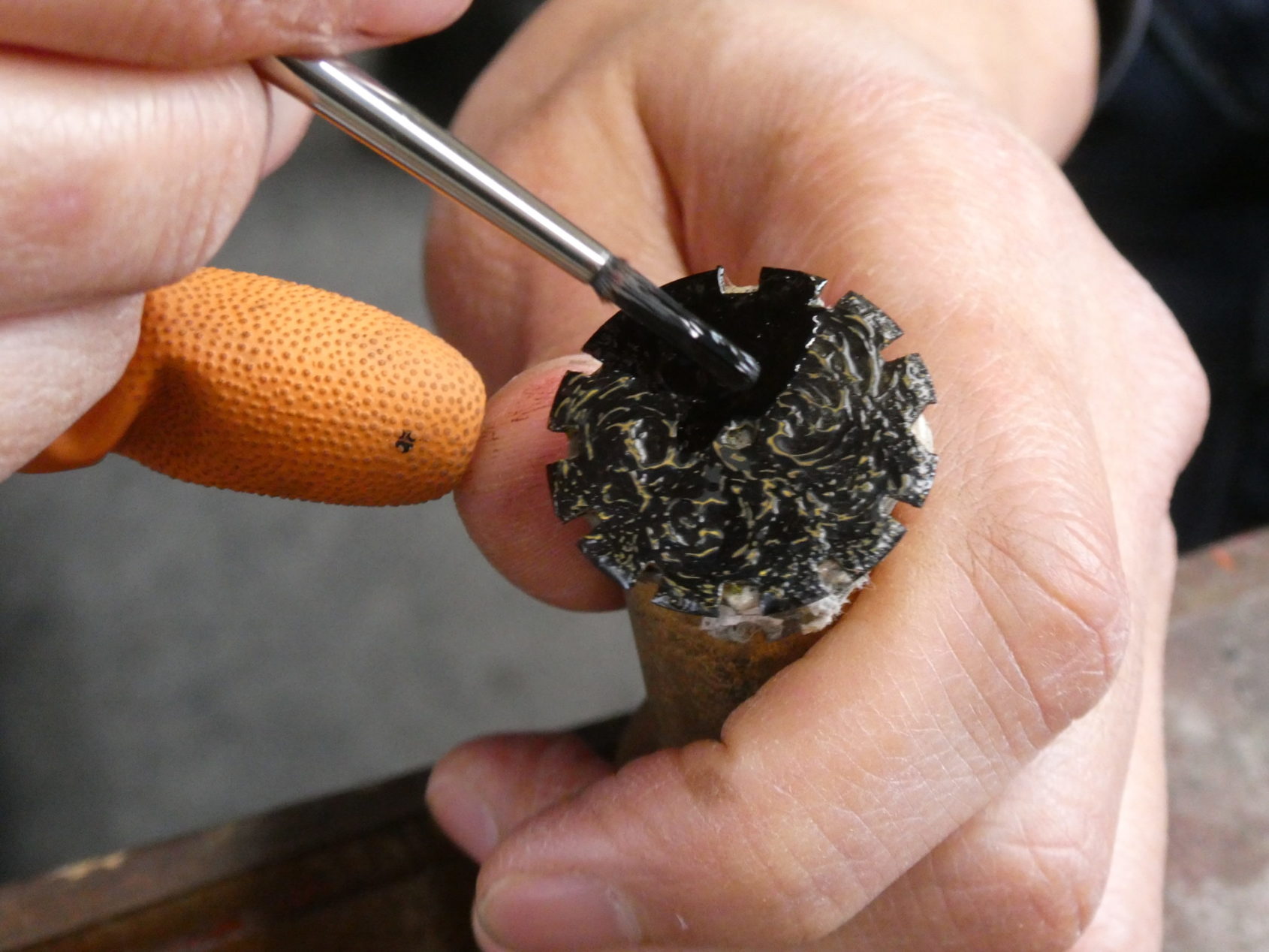 Where the Minase Divido Shibo-Urushi differs from previous releases is its use of colour and patterns incorporated into the lacquer. The urushi is mixed with egg white and colours to make it less viscous, allowing the colour to be swirled, blobbed, or otherwise manipulated around the dial before it’s dried. The result is a completely unique dial for each watch that gets made with an organised chaos that plays brilliantly against the intense structure of the case. 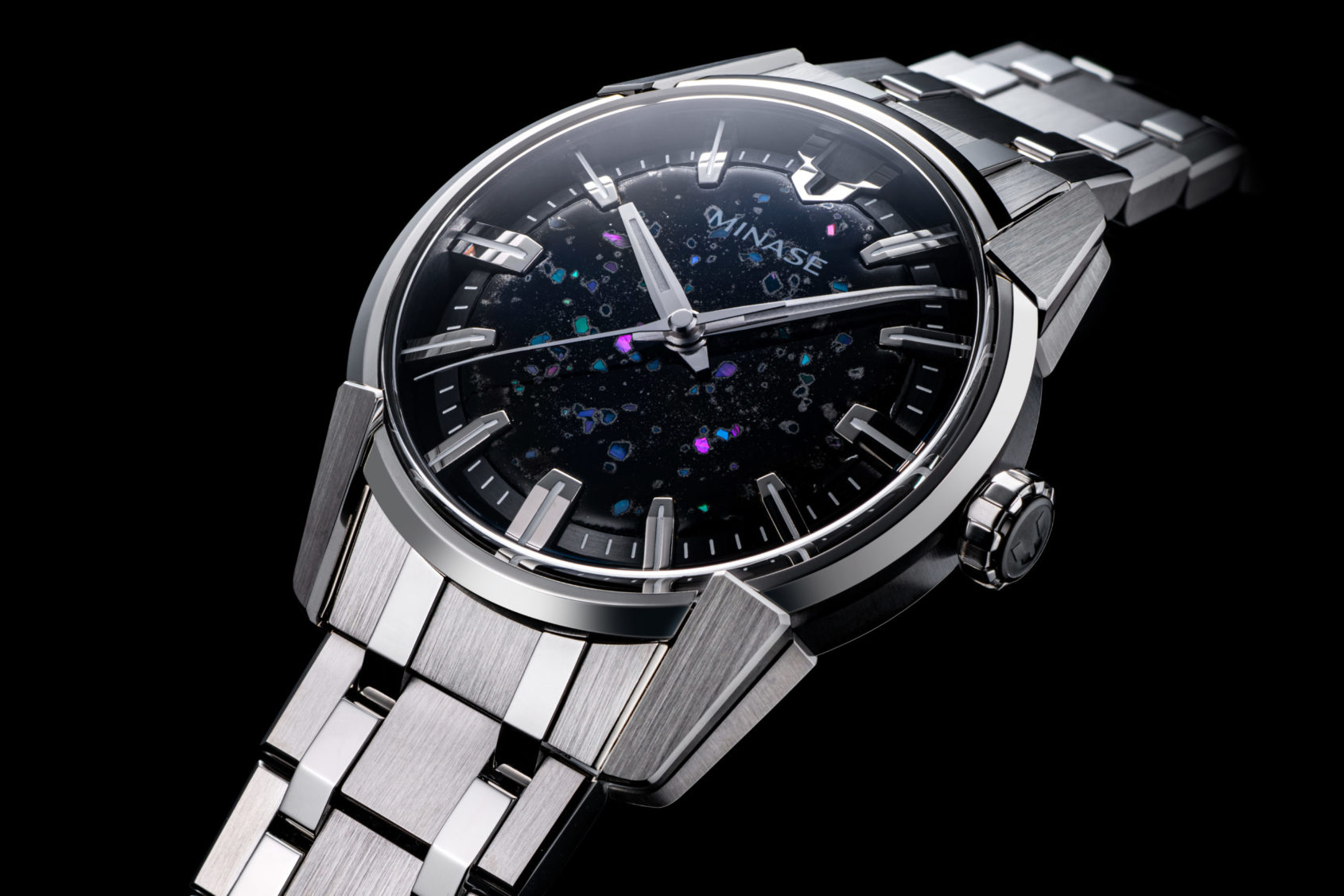 There are four dial variants available, each with their own very individual character. The first is Metallic Haze, with streaks and swirls of metallic grey forming a billowing smoke storm on the dial. Of all the designs, the colour neutrality of this reference is definitely the most versatile. Next is the Golden Flux, which has a similar effect to the Metallic Haze but with a rich, yellow-orange golden colour. Both the look and the name evoke a sizzling blaze of electrical sparks, accentuating the sportiness of the watch. Third is the Sky of Shells, which almost looks like a slice of granite or some other kind of mineral-rich stone. Different hues of blue and purple are scattered around in chunks, looking like a collection of colliding galaxies or even something biological under a microscope. The fourth and final reference is called Scarlet Illusion, with a deep crimson colour permeating the black lacquer in fusing blobs. The patterns this approach creates stray fairly close to the colouring on some kinds of venomous reptiles, where a sense of danger is clearly apparent. 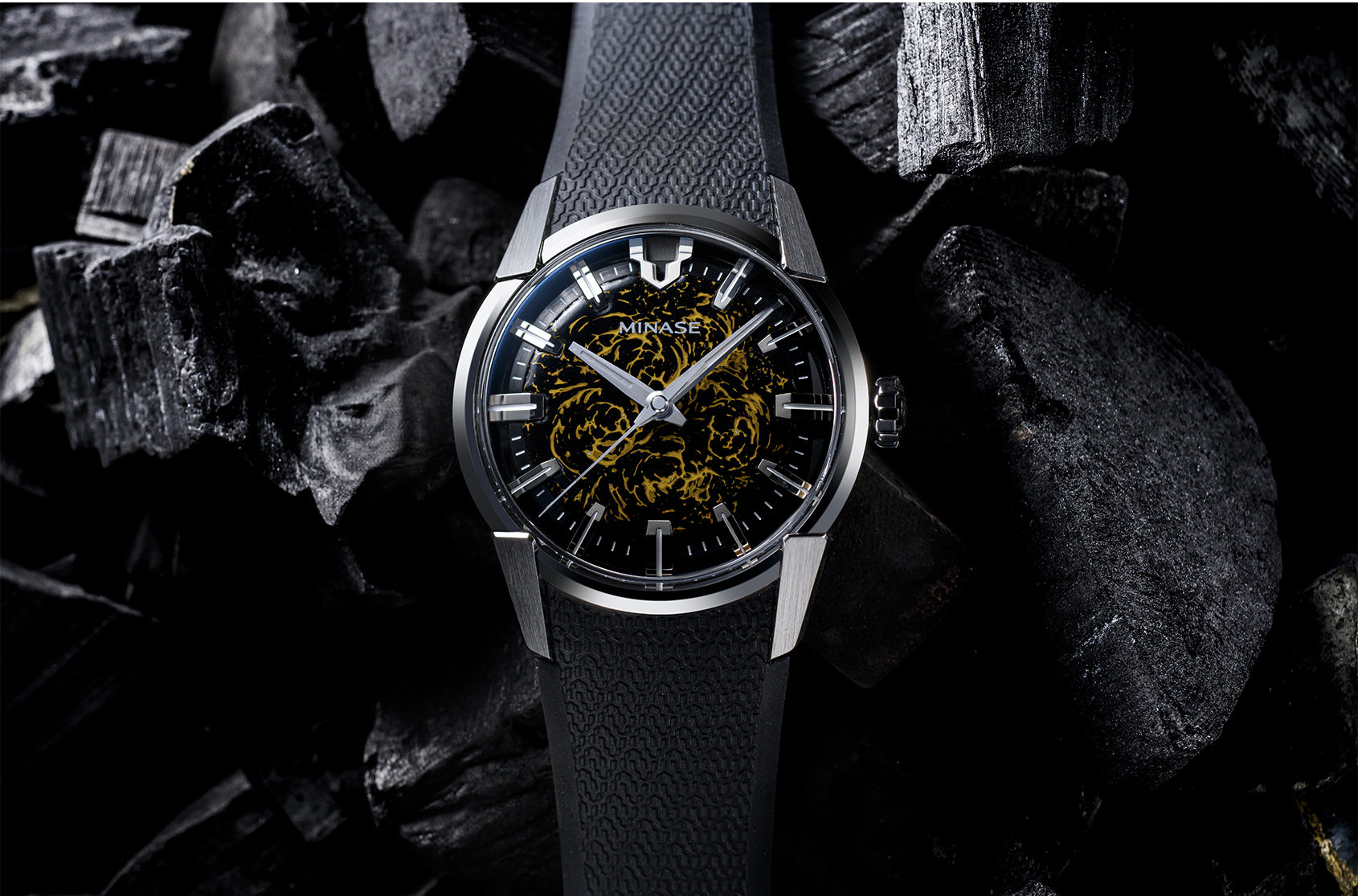 The Minase Divido Shibo-Urushi uses their Divido 2.0 case architecture — a futuristic looking ornament which redefines the barriers between the case, the lugs, the bracelet and even the indices. The bezel is hand-finished to a mirror polish using the Sallaz technique, also known as Sarazu or Zaratsu, which gives a distortion-free reflection that can appear fully black when held at certain angles. Brushed lugs hone in on a sportier feeling for the watch, while their chamfered and polished edges doesn’t let you forget its high-end status. The indices may technically be a part of the dial, however their connection to the outer bezel makes them feel like a claw within the case that grips the dial in place. 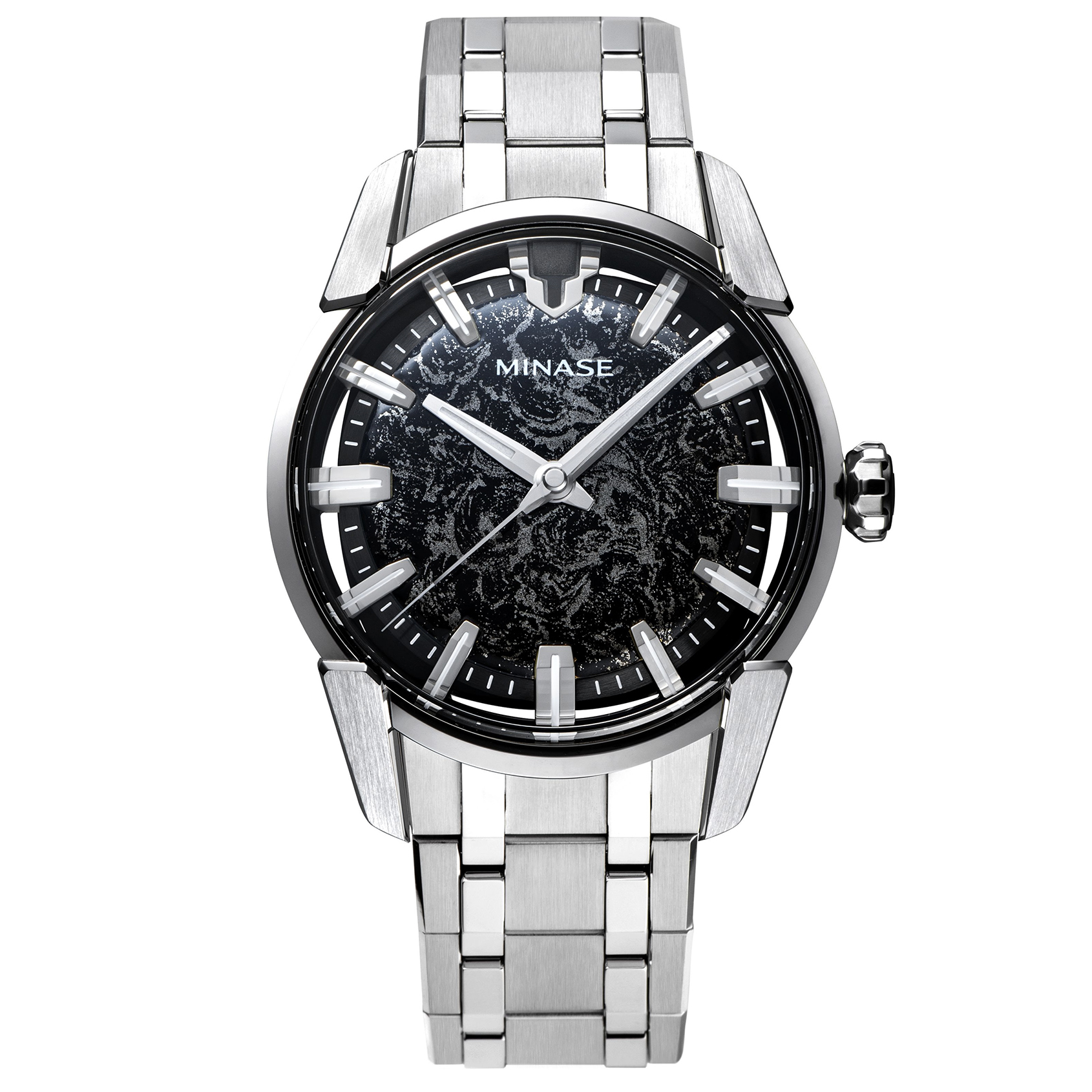 The case is a well-sized medium, with a 40.6mm diameter, 48.7mm lug-to-lug and 11mm thickness. The length may be a stretch for those with smaller wrists, but the size is optimised to show as much of the dial artistry as possible. The sapphire crystal is domed and coated to be non-reflective, and the display caseback offers a glimpse into the movement. You probably don’t want to be swimming with this watch, however it has 50m of water resistance for peace of mind in splashes or unexpected dips. 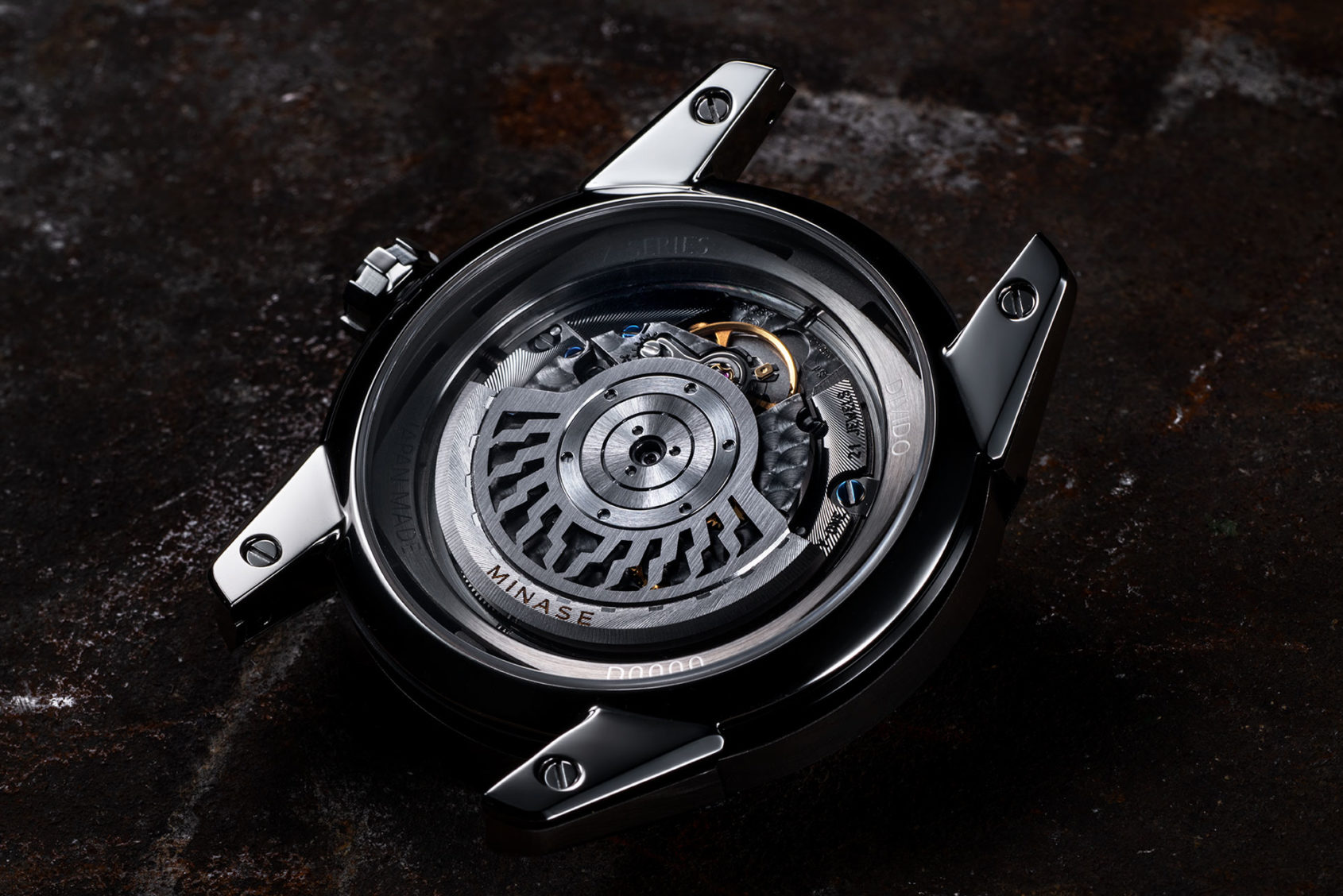 With so much focus on the design and execution of the dial and case, Minase have opted to use a Swiss-made ETA 2892 as the movement. It is delivered to Minase in an unfinished state, where they then hand-decorate and assemble the movement themselves. It has a power reserve of 42 hours, beats at 28,800 vibrations per hour, and has an ETACHRON regulator. This not only provides excellent performance for the Minase Divido Shibo-Urushi, but also ensures affordable servicing in the future. 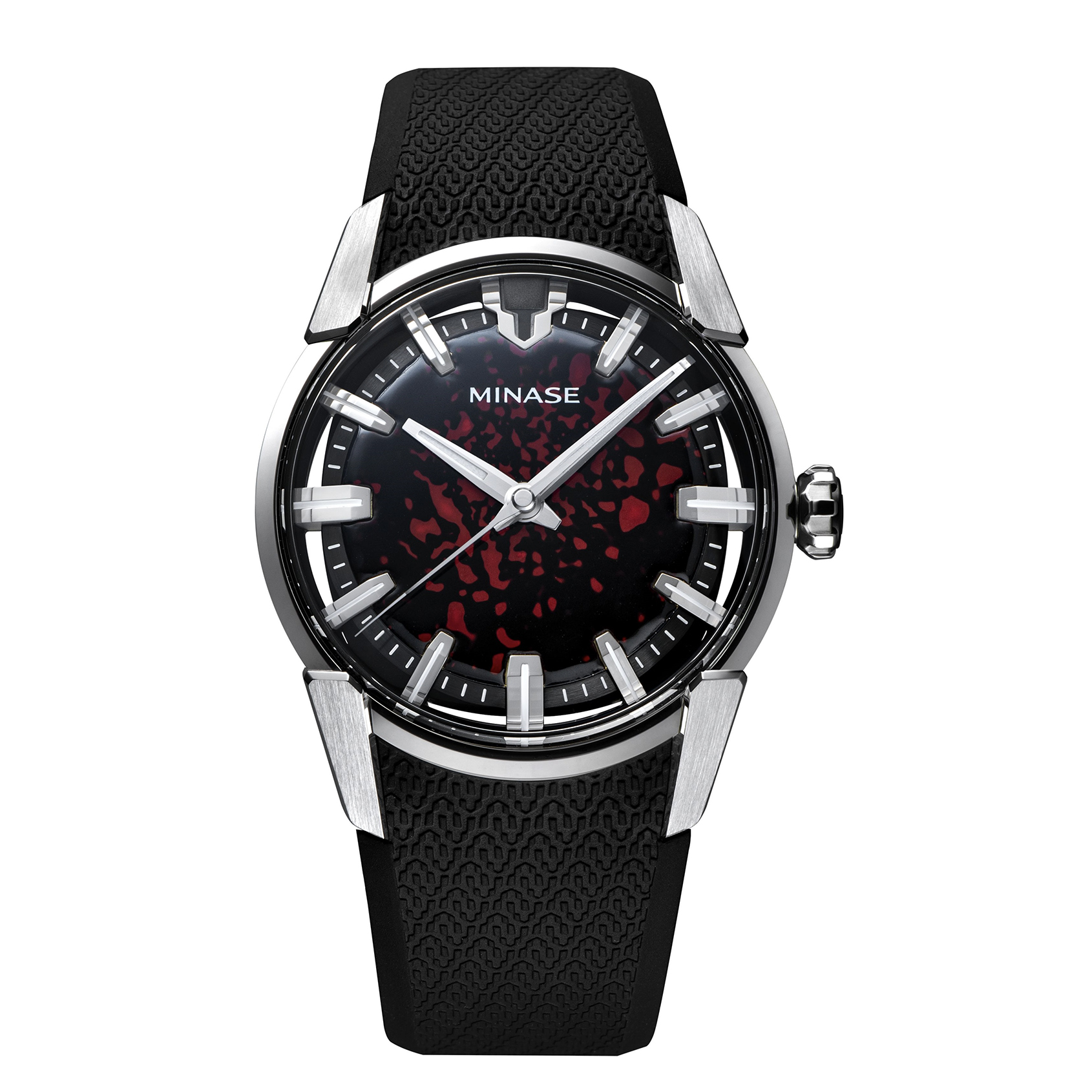 Presented on a solid steel five-link bracelet with a deployment clasp, the Minase Divido Shibo-Urushi definitely comes across as ornate. The links are nicely shaped with polished edges on the brushed links, with the polished ones giving an appropriate amount of glamour to the watch. Should you want something that looks a bit more casual, it’s also available on an integrated black rubber strap. The pattern on the rubber strap is made up of the Minase logo, as visible on the 12 o’clock index.

The Minase Divido Shibo-Urushi is available from Minase’s online webshop here, and is priced at 6,700 CHF on the rubber strap or 7,900 CHF on the steel bracelet.