HANDS-ON: The Dan Henry 1945 offers rugged WW2-era style for the same price as a MoonSwatch

Editor’s Note: Andrew here, and it just dawned on me as I read this piece by Fergus that the true modern master of democratisation, Dan Henry, has not only done it again with an “evocation of an era” as Ferg eloquently puts it. No, it’s more than that. In 2022, after a wave of desire swept the world for the MoonSwatch, he’s done it for the same price. Yes, this watch, in stainless-steel, is the same price as the MoonSwatch at retail. And significantly cheaper than the aftermarket prices of $400-$800 the watches are currently bubbling at. It’s absolutely mind-boggling, and we really don’t know how he does it. But here it is. Now, let’s get the torture of which dial you’re going to choose underway… Take it away, Fergus.

Dan Henry was one of the first major microbrands that achieved such grand success that you can hardly call them micro anymore. Using his vast collection of vintage watches for inspiration, Dan Henry’s watch designs offer powerful evocations of certain points in time, hence their naming scheme of specific years. The 1945 is named after the year the Allies officially claimed victory in World War II, and there’s no doubting its success in channelling that era. 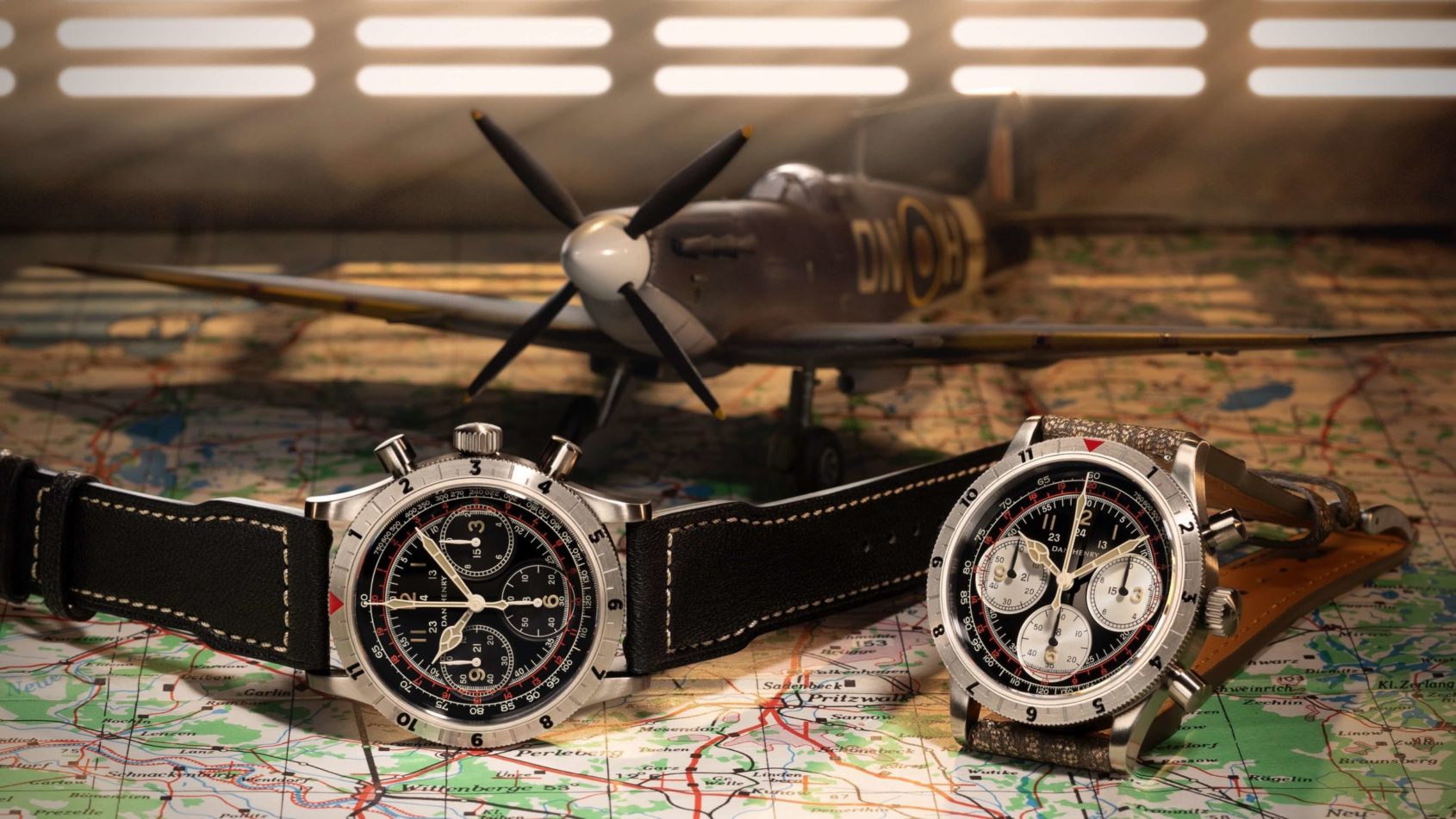 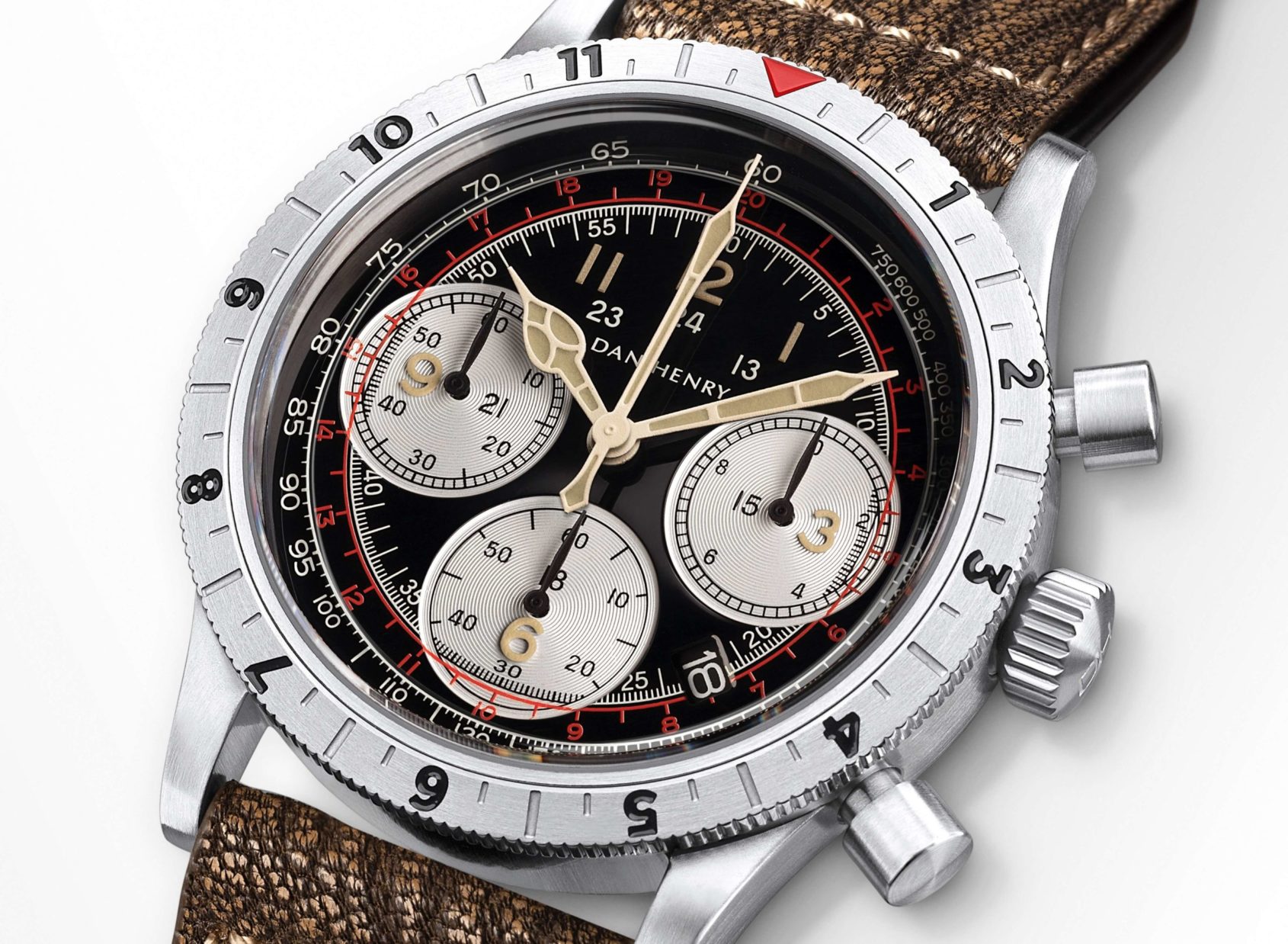 With a Spitfire fighter plane emblazoned on the caseback, you can be sure that this watch is specifically aiming to honour the pilot’s watches of the second World War. With legibility in mind, the case size is a healthy 41.5mm that carries good wrist presence without losing its vintage credibility, given that pilot’s watches were usually on the larger side. The use of a quartz movement keeps it at an average thickness of 13.6mm, improving the overall wearability.

The 12-hour bezel not only adds GMT functionality, but the thin profile and brushed steel finish very much embraces the Weems style. We noticed its coin-edge and upon turning, discovered it’s actually a 12-click bezel, corresponding to the hour markings. Pioneered with Longines, the Weems bezel was originally devised for marking the seconds on a watch that didn’t have hacking features, but the patent was soon spread amongst other major Swiss brands like Omega, LeCoultre, and Zenith. 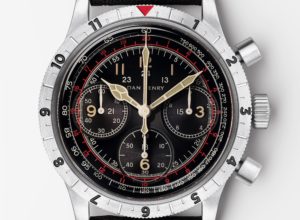 There’s a lot going on with the dial of the Dan Henry 1945, but there isn’t a single element out of place. The black and white colour scheme with red highlights is exceptionally cool, with your choice of white or black subdials featuring concentric circle guilloché. The subdials are fairly traditional for a chronograph, with a running seconds showing the single-second tick of the quartz movement. Overlapping the subdials are three scales printed around the dial’s edge, including a tachymetre to use with the chronograph and a telemeter in red that can be used for calculating the distance of falling bombs. 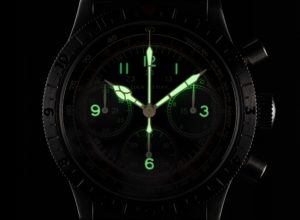 Although the dial is definitely cluttered, with some of the Arabic numerals and their respective 24-hour counterparts being deleted from the dial altogether, it does manage to be easily legible thanks to the large cathedral hands that stand out from the dial in all of their aged-white glory. In typical Dan Henry fashion, you can opt to have a date window sneakily incorporated into the 4:30 position, or keep the dial with one fewer complication. Most collectors would agree that a date display is too much on a watch like this, however it’s wonderful that those who need one can get one. 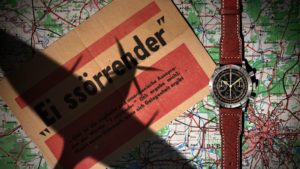 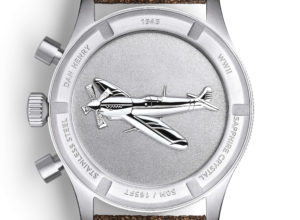 Dan Henry have used the Miyota 6S20 Meca-Quartz movement in their 1963 watch previously, and it’s undeniably the right choice to make watches of this style accessible to a much bigger audience. The single-second tick is relegated to the running seconds subdial as to be less noticeable, while the main chronograph hand moves at 4Hz to create the illusion of a fully mechanical movement. It has an estimated battery life of four years, which of course can vary wildly depending on your chronograph usage habits. All Dan Henry models depict a vehicle of their chosen timeframes on the caseback, and the dimensionality of the artwork is always fantastic. The Spitfire here is presented in a high polish on top of a matte, grainy sky.

While Dan Henry have already tackled a military chronograph in the form of the 1939, the Dan Henry 1945 does an excellent job providing a look into another essential style from World War Two. It’s a wellspring of designs that could still be tapped into, and the low cost means that you’ll be extremely tempted to own them all.

The Dan Henry 1945 pricing and availability: