HANDS-ON: The Bulova Classic HACK Military is a handsome field watch for under $500 USD

Bulova reminded the world what they’re capable of when they released the MIL Ships watch towards the end of 2021. But there was another military-focused reissue that seemed to fly a little undeservedly under the radar. The Bulova HACK was first shown earlier that year, honouring the Bulova watches that were issued to American troops in WWII with their simplistic black and white dials. The next follow-up aged things up with creamy off-white paint and red 24-hour markers, but the latest release goes in a slightly more modern direction without sacrificing the heritage of its Bulova A-11 inspiration. 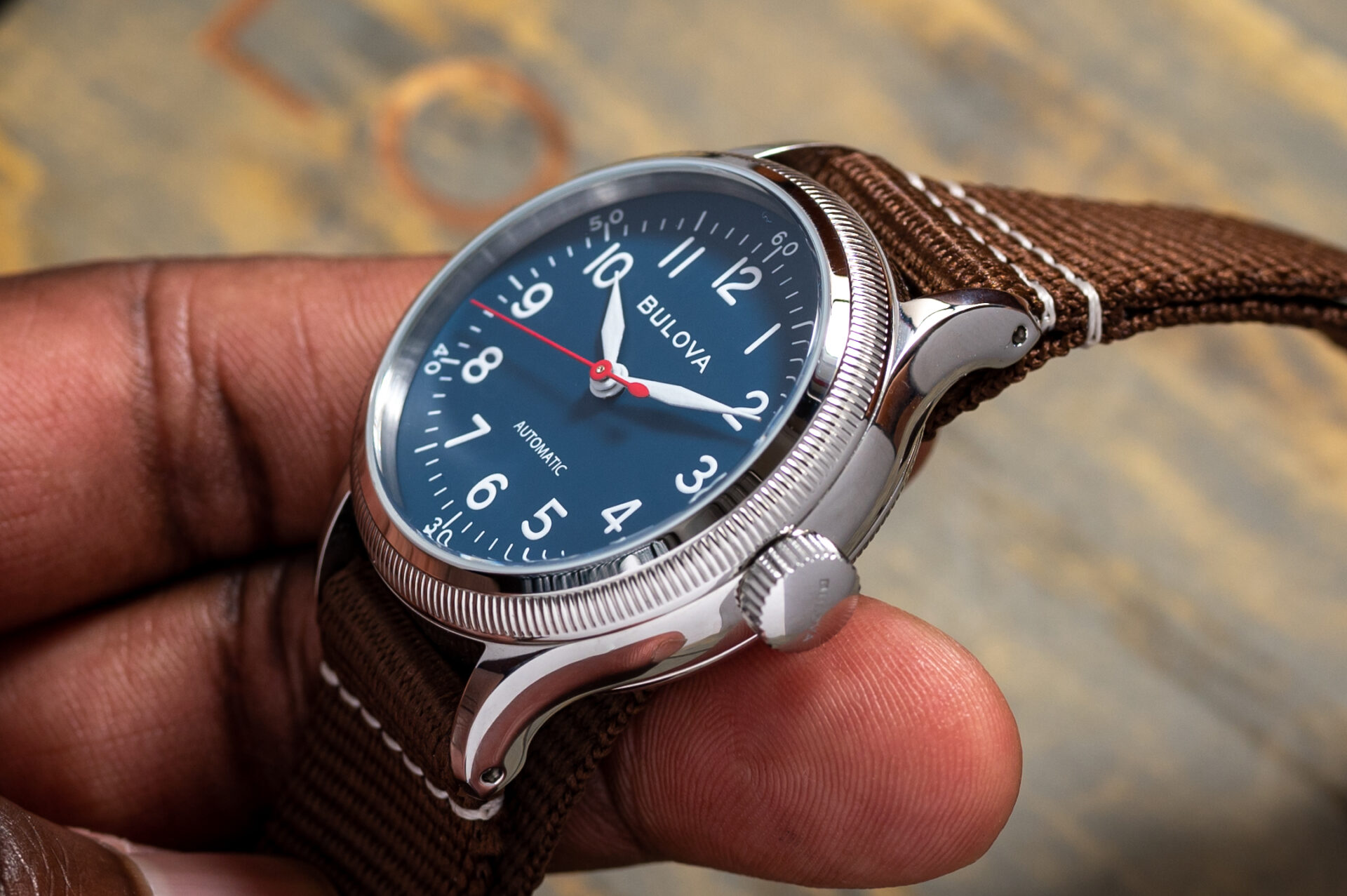 Although the trends are definitely moving towards smaller case sizes in recent years, the original 32mm case of the Bulova A-11 would probably look a little bit too small by today’s standards. Bulova originally went for a moderate size of 38mm for the first two HACK references, but the new Bulova Classic HACK Military in blue shrinks down a tad to 37mm, allowing for the lugs to be long and elegant without compromising wearability or vintage charm. The most distinct feature of the case has to be the coin-edge bezel, once functionally screwing the crystal down and now simply providing old-world decoration.

The caseback is solid, etched with stern military-style markings that denote the A-11 heritage and a list of serial numbers. Although some would prefer an exhibition caseback, this version is more accurate to the watch it’s paying tribute to, and it’s mostly covered by the brown NATO strap. The coin edge returns on the caseback too, screwing down to allow 50m of water resistance. 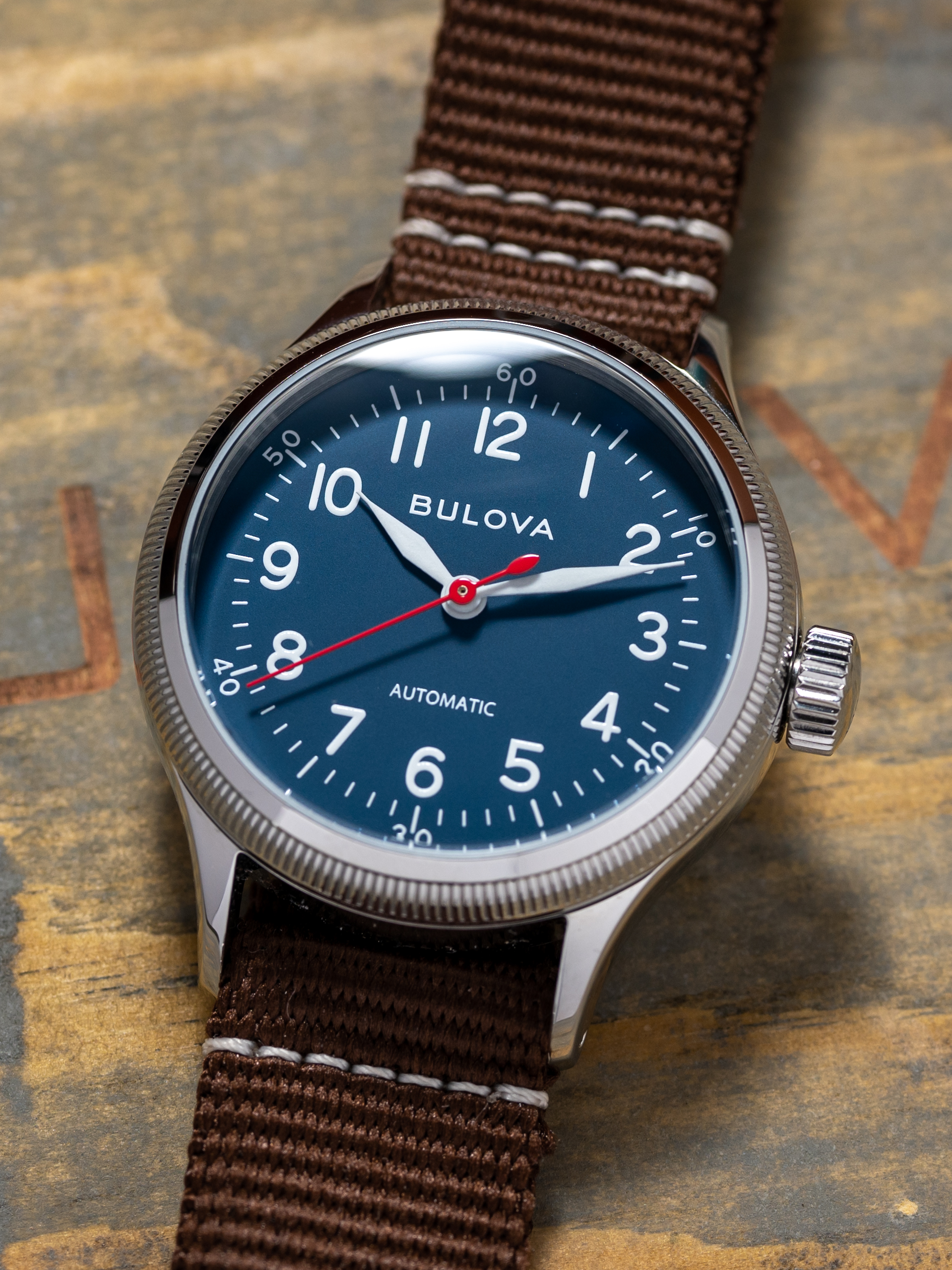 The watches of WWII were built to exact sets of specifications that were laid out by the militaries, and Bulova’s A-11 was one such interpretation that became recognisable even if their logo wasn’t always printed on the dial. This watch was mainly used by airforce navigators, hence the emphasis on legibility and luminous functionality, not dissimilar to the Flieger style that was used by the German airforce. The red seconds hand was important for it to stand out against the dial as synchronisation was paramount to the success of many military operations.

In a rather distinct, lighter shade of navy, the Bulova Classic HACK Military takes all of the 1940s character and gives it a fresh lease on life. It’s not exactly sportier in this blue colour scheme, but it definitely feels like a more light-hearted statement than something black, tactical, and utilitarian. The red seconds hand is also more of a colour contrast, giving a vibrant electric flair to the overall effect. The only other significant difference between this watch and the originals is the “automatic” text above 6 o’clock. 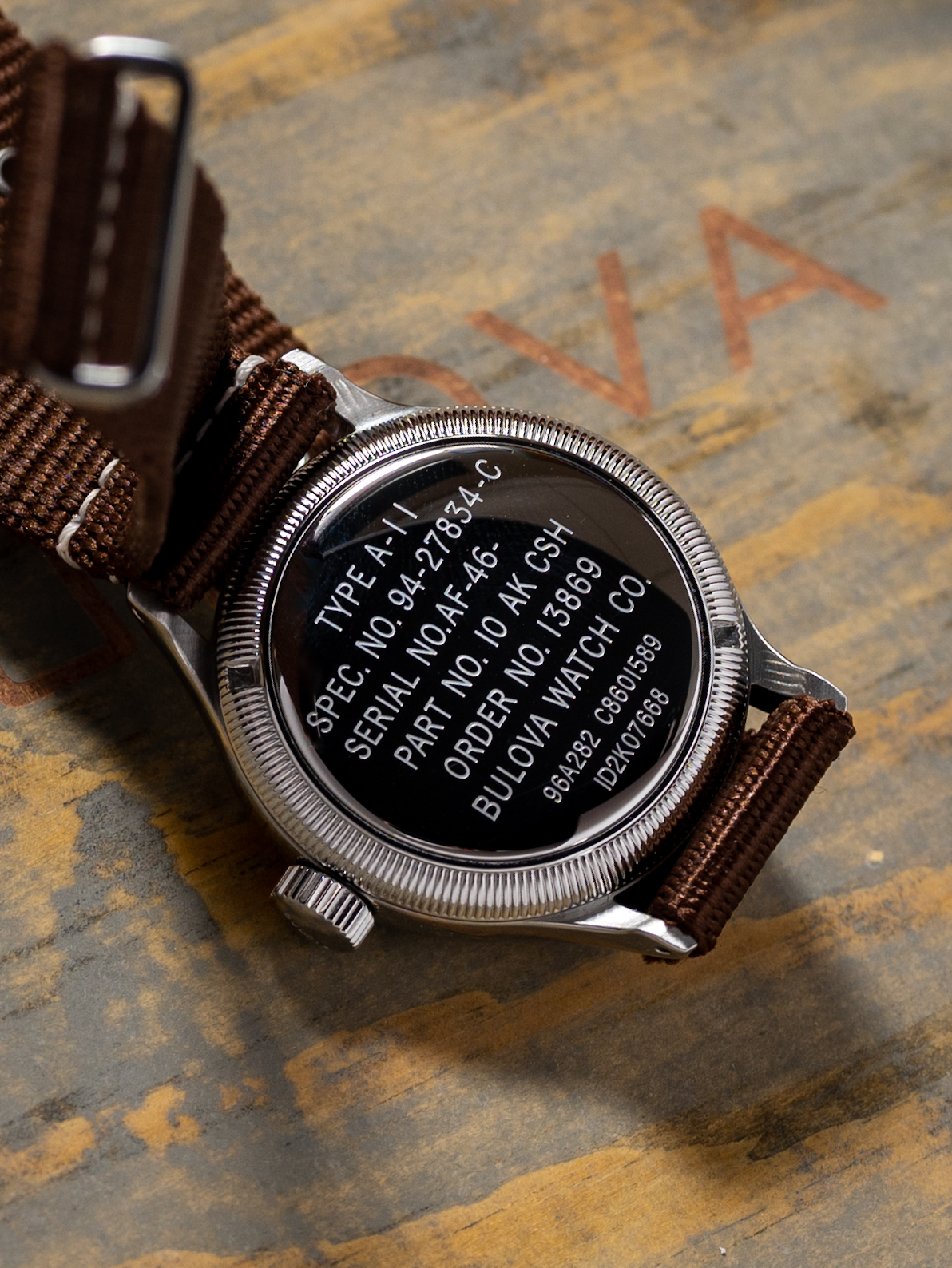 As the name suggests, the most important feature of the Bulova Classic HACK Military is the ability to stop the seconds hand when pulling out the crown. This allowed squads to synchronise their watches before missions, avoiding potentially catastrophic outcomes when coordinated moves wind up being executed at the wrong times. While the original A-11 watches would have used hand-wound Bulova or Elgin movements for example, this new version uses the Miyota calibre 82S0. This automatic movement is produced by the Japanese watch company Citizen who now own Bulova, and it has perfectly acceptable specifications for a time-only watch. It has the all-important hacking seconds, a beat rate of 21,600 vibrations per hour, and 42 hours of power reserve. The stated accuracy tolerance is between -20/+40 seconds per day, and the 21 jewels more than fulfils the 15-jewel minimum as stated by the original A-11 requirements. 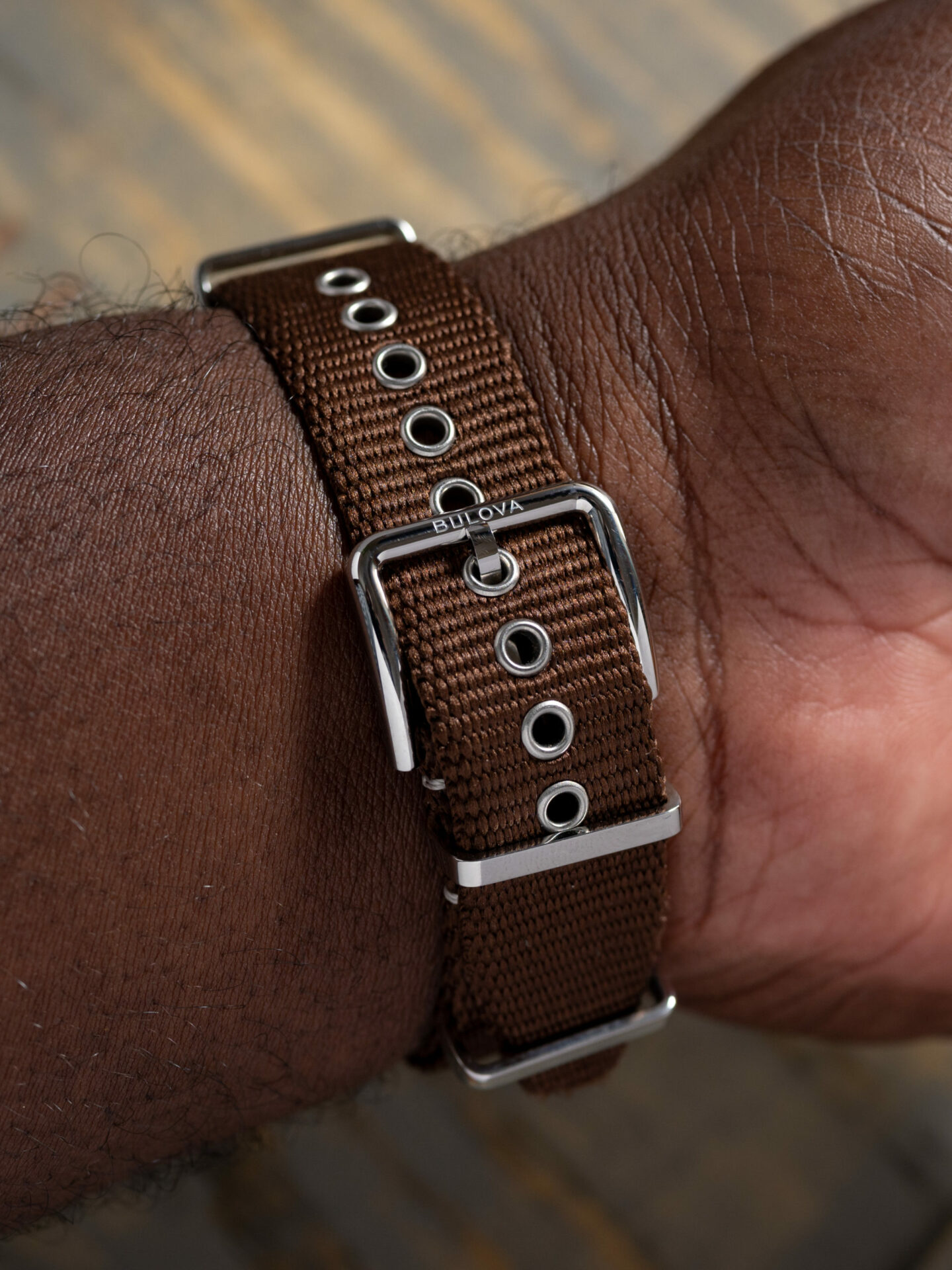 Introducing a third colour to the mix, the Bulova Classic HACK Military is provided on a brown woven strap that has the visual effect of a NATO, but with the adjustability of a pin-buckle system. The strap ends are stitched together requiring the use of removable spring bars, and the strap holes include steel ferrules to prevent potential fraying of the edges. 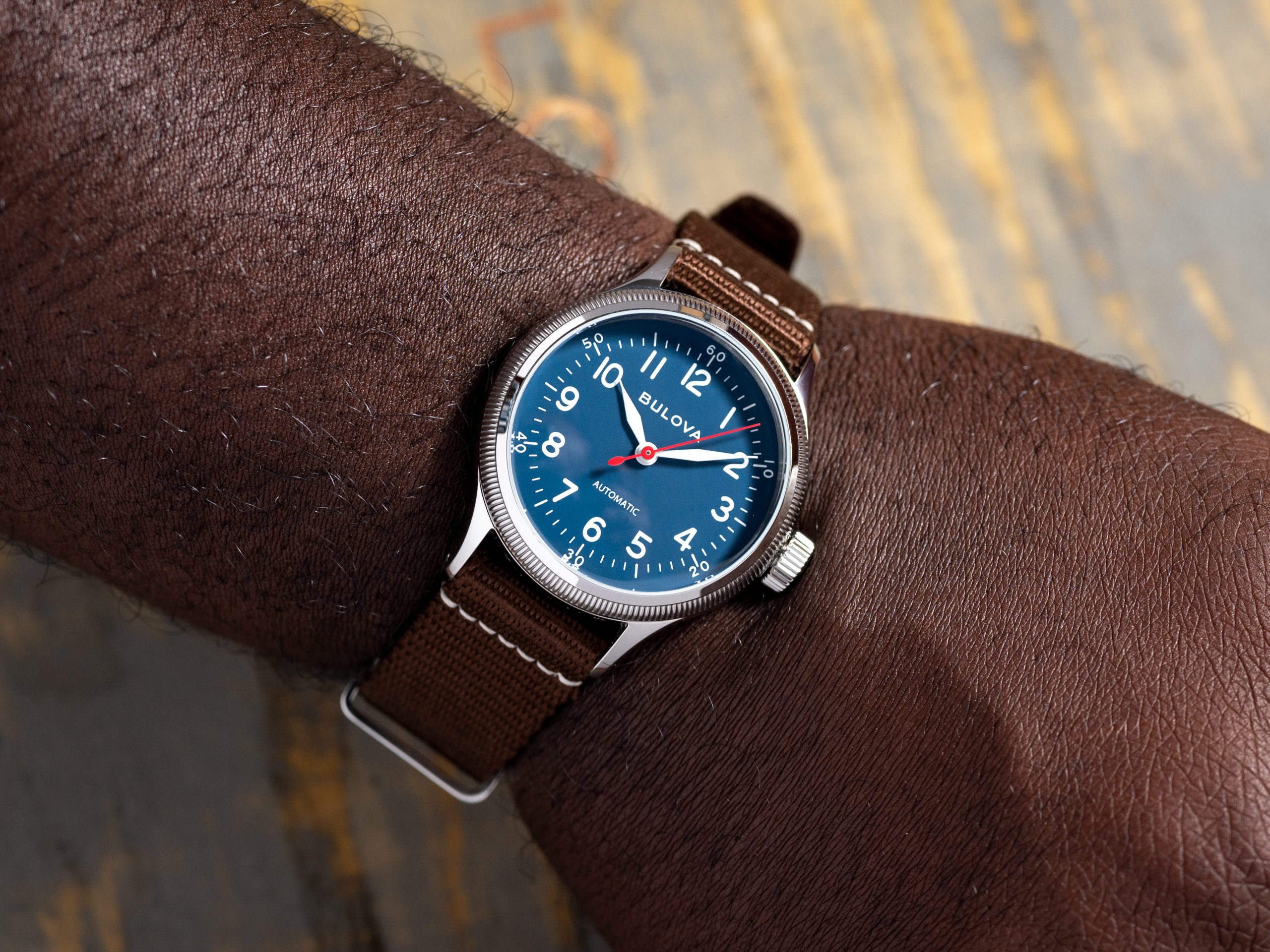 The Bulova Classic HACK Military has an Australian RRP of $550 AUD, or $450 USD. They are currently out of stock on Bulova’s Australian online store, however you should be able to find them at your local Bulova retailer.