Last year, Breguet gave us a first taste of their new design for the Marine collection. However, the new look didn’t get the massive attention you might expect for an update of a pillar collection. Not because it wasn’t noteworthy but because the new look was revealed in the form of the Marine Équation Marchante 5887 – and when you get a complication as mouth-watering as that, the aesthetics tend to play second fiddle. In contrast, the new Marine  5517, released at Baselworld 2018, places the emphasis firmly on the design. 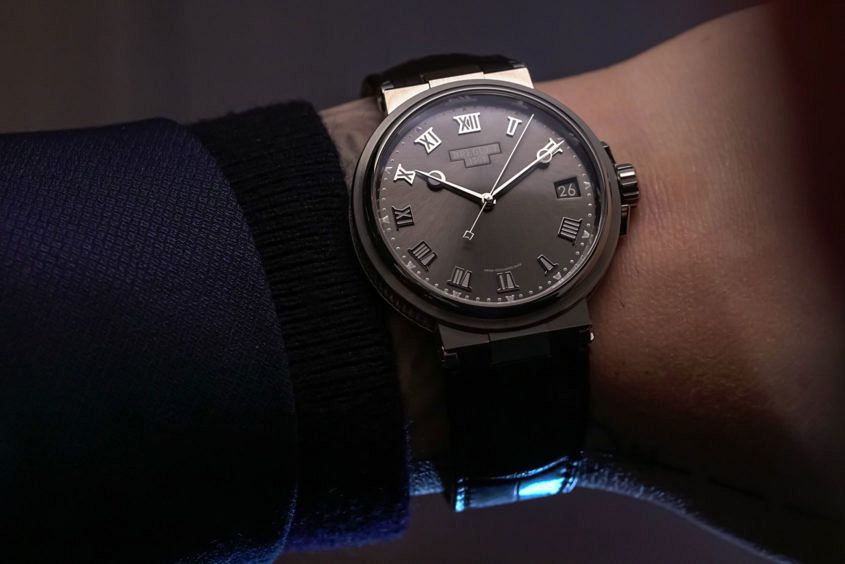 Set in a 40mm case, the movement is Breguet’s self-winding in-house calibre 777A with a power reserve of 55 hours, a silicon balance spring and skeletonised winding rotor. 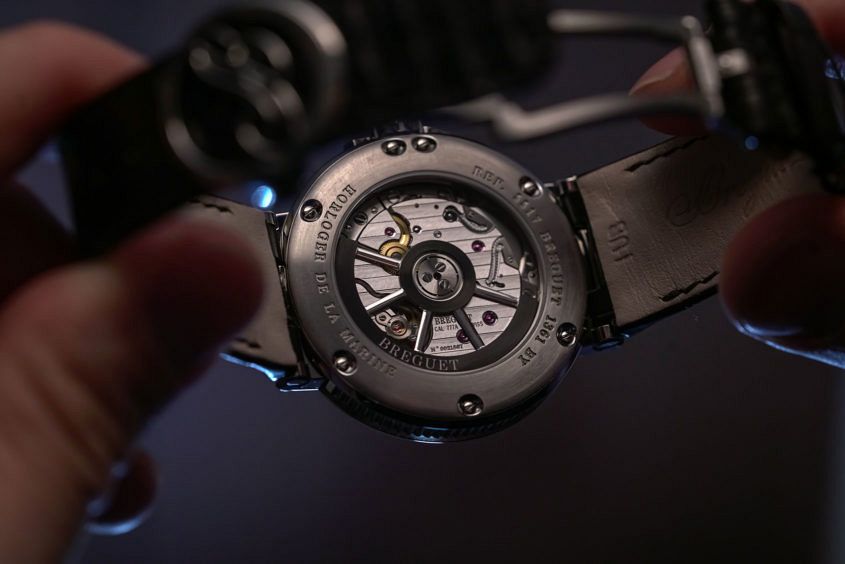 As well as this white gold-blue dial version, the Breguet Marine 5517 comes in red gold with a silvery white dial, and in titanium – the latter with a sun-brushed dial, rather than the guilloché wave pattern of the gold models. The dial of each watch is individually numbered, below the Breguet logo. The hour chapter is marked out by applied Roman numerals, with luminescent dots for the minutes and a date window at 3 o’clock. There’s also lume on the ‘lollipop’ ends of the faceted gold hands.

The watch is complemented by a blue strap, in either alligator leather or rubber. 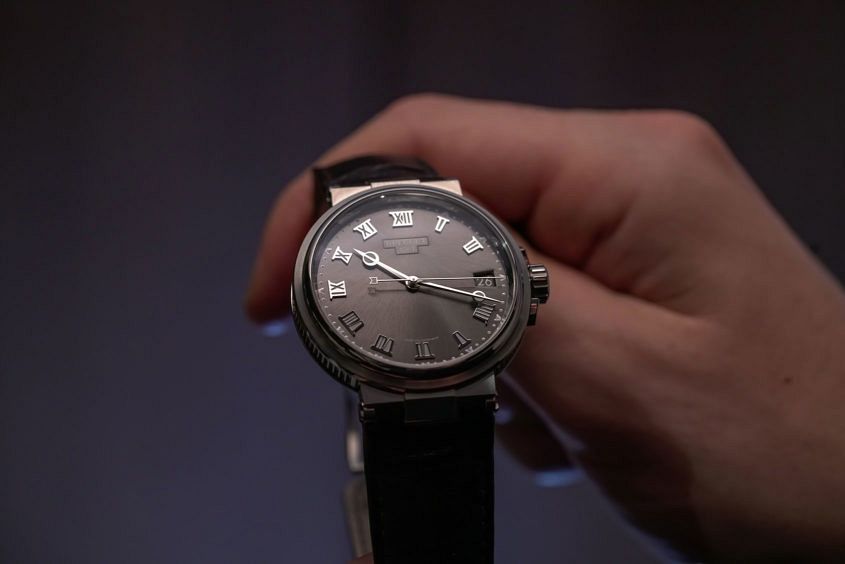 Compared with its predecessors, the new Marine dial design looks cleaner and more modern, with a stylised hand-guilloché wave pattern replacing the more traditional sunray guillochage, and the five-minute intervals now marked only by dots, rather than dots-plus-numerals. As you turn your wrist, there’s a lot of nice light-play across the dial, thanks to the deeply etched pattern, which contrasts with the smoothly brushed chapter ring and stylised Roman numerals. Bold and lume-filled, the numerals are another departure from the classical Roman numerals used previously. 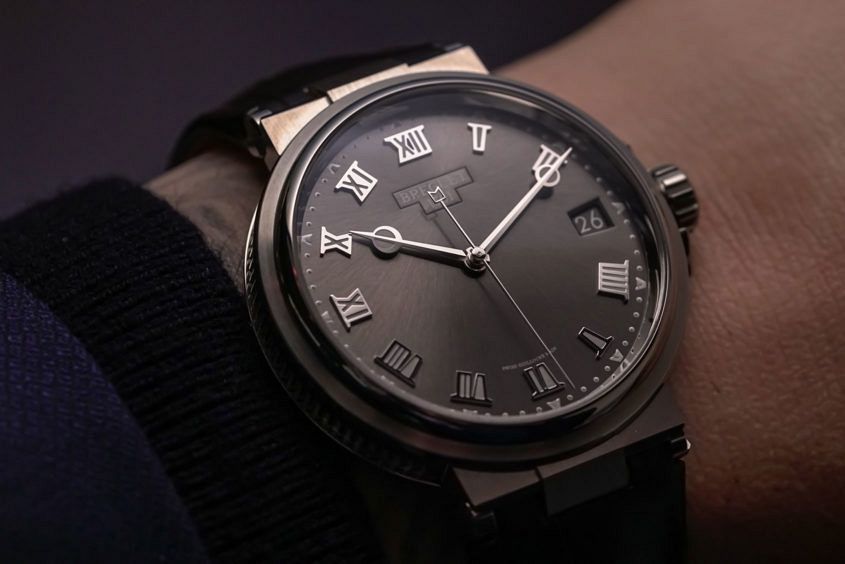 Adding to the overall strength of the look, Breguet have made their signature caseband fluting slightly wider, with sharper angles — making the angles of the distinctive Marine lugs crisper and more dynamic-looking — and have added a new central lug to the strap attachment.

Unsurprisingly for a collection named Marine, nautical allusions abound – the most obvious being the guilloché wave pattern. More subtle is the stylised ‘B’ counterweight on the seconds hand – a miniature silhouette of the marine signal flag that corresponds to the letter. Flip the watch over and you’ll see the rotor, open-worked to resemble a ship’s wheel and the crisp Côtes de Genève-style stripes that – if you want to stretch the allusion – echo the planks of a yacht deck. 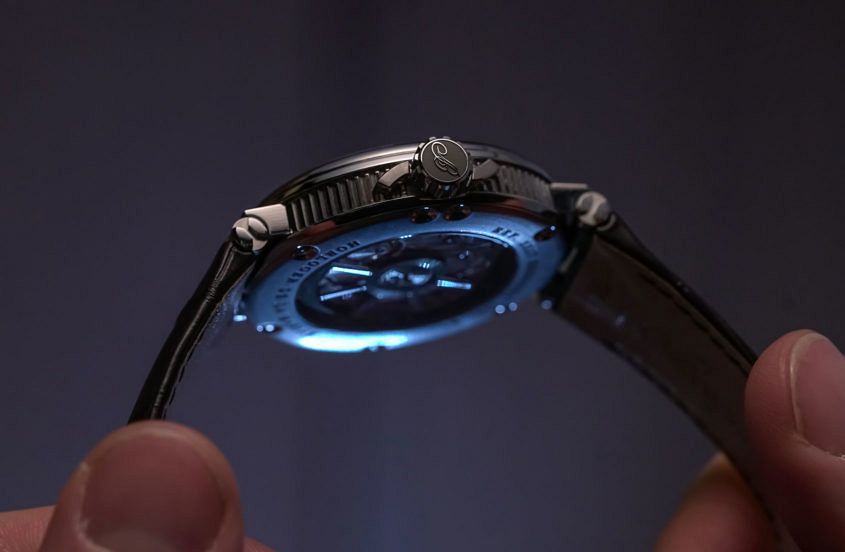 The 40mm case fits really well on a wide range of wrist sizes (even on skinny me), thanks to the angled lugs and convex case-back. While rubber is the fashionable material du jour for straps (and not always used to the best effect), I think it works really well on the Marine Three-Hands 5517, adding a more modern twist than the traditional alligator-leather alternative.

The man (or woman) who likes to wear a very distinctive watch that blends modern and dynamic styling with a heap of classically luxurious touches.

The Roman numerals: normally very classical chez Breguet, these are an unusual, stylised design and filled in with lume. Polarising, perhaps, but they play well with the overall design.