Anniversaries are monumental moments in all aspects of life and they’re certainly no different in watchmaking. It has been no secret that this year marks the 50th anniversary of the Royal Oak, originally conceived by Gérald Genta and manufactured by Audemars Piguet in 1972, and that a successor of some form was on the horizon. The Royal Oak completely changed the watch industry, birthing the concept that high horology could be married with stainless steel. Upon its introduction, it was not readily metabolised by the marketplace. The notion that a stainless-steel watch could be so luxurious, and command such a price, was a radical idea in 1972. Of course today, we all know too well that stainless steel trades like precious metal – many models now “unobtanium” and commanding huge premiums on the secondary market. Today, Audemars Piguet has finally ushered in the next generation: the Audemars Piguet Royal Oak “Jumbo Extra-Thin ref. 16202. 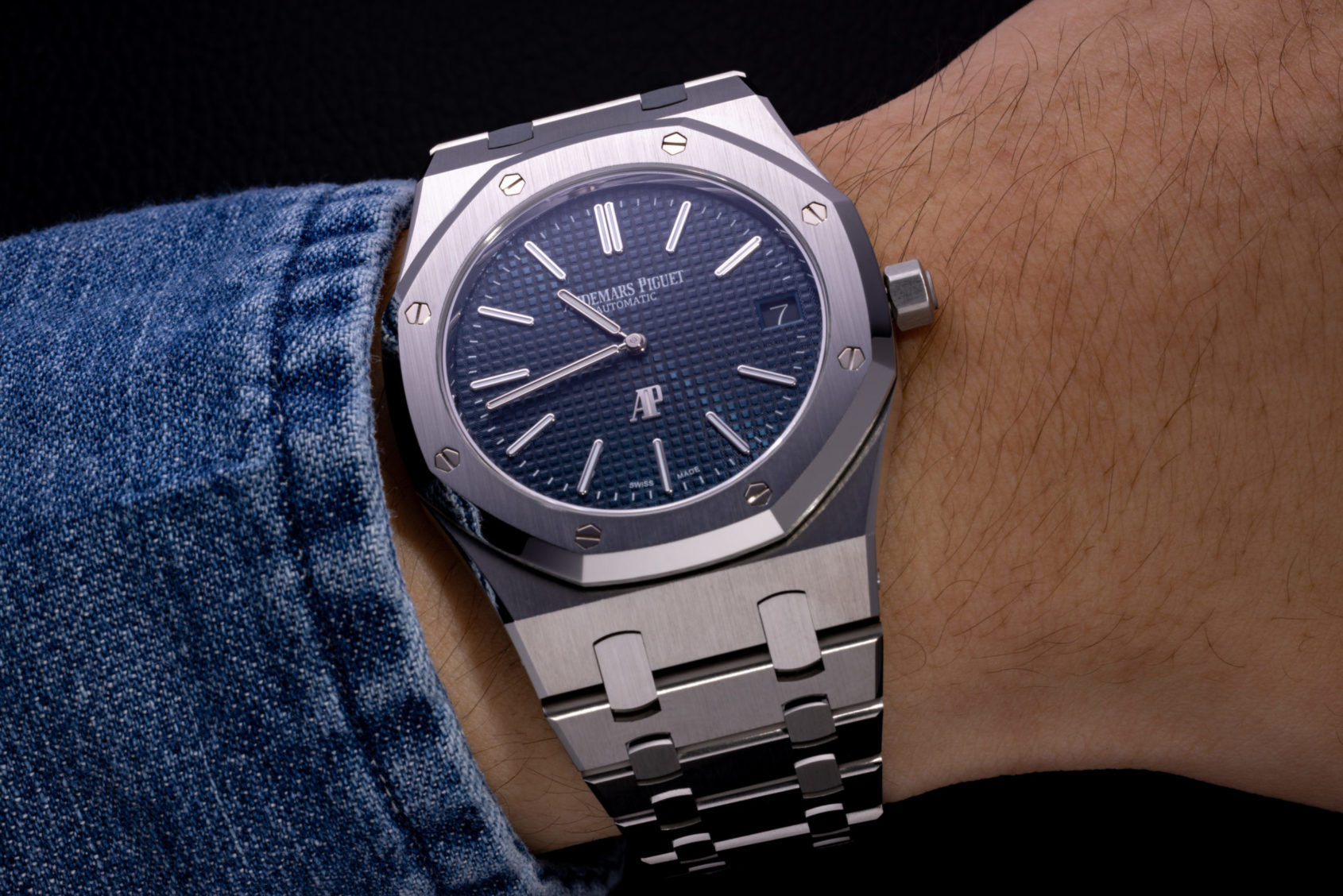 As such a beloved icon, much of its design has been maintained – its external proportions and finishing style largely unchanged. Internally, however, we now have the first Royal Oak “Jumbo” which utilises an in-house AP calibre, the new calibre 7121 replacing the JLC designed calibre 2121 used for the last 50 years. We went hands-on with both the stainless-steel and yellow-gold models, but the new Audemars Piguet Royal Oak Jumbo Extra-Thin ref. 16202 is also available in rose gold and platinum as well. My focus, however, will largely be on the 16202ST in stainless steel (the most faithful interpretation of the original Royal Oak), but I will touch upon the precious metal variants at the end. 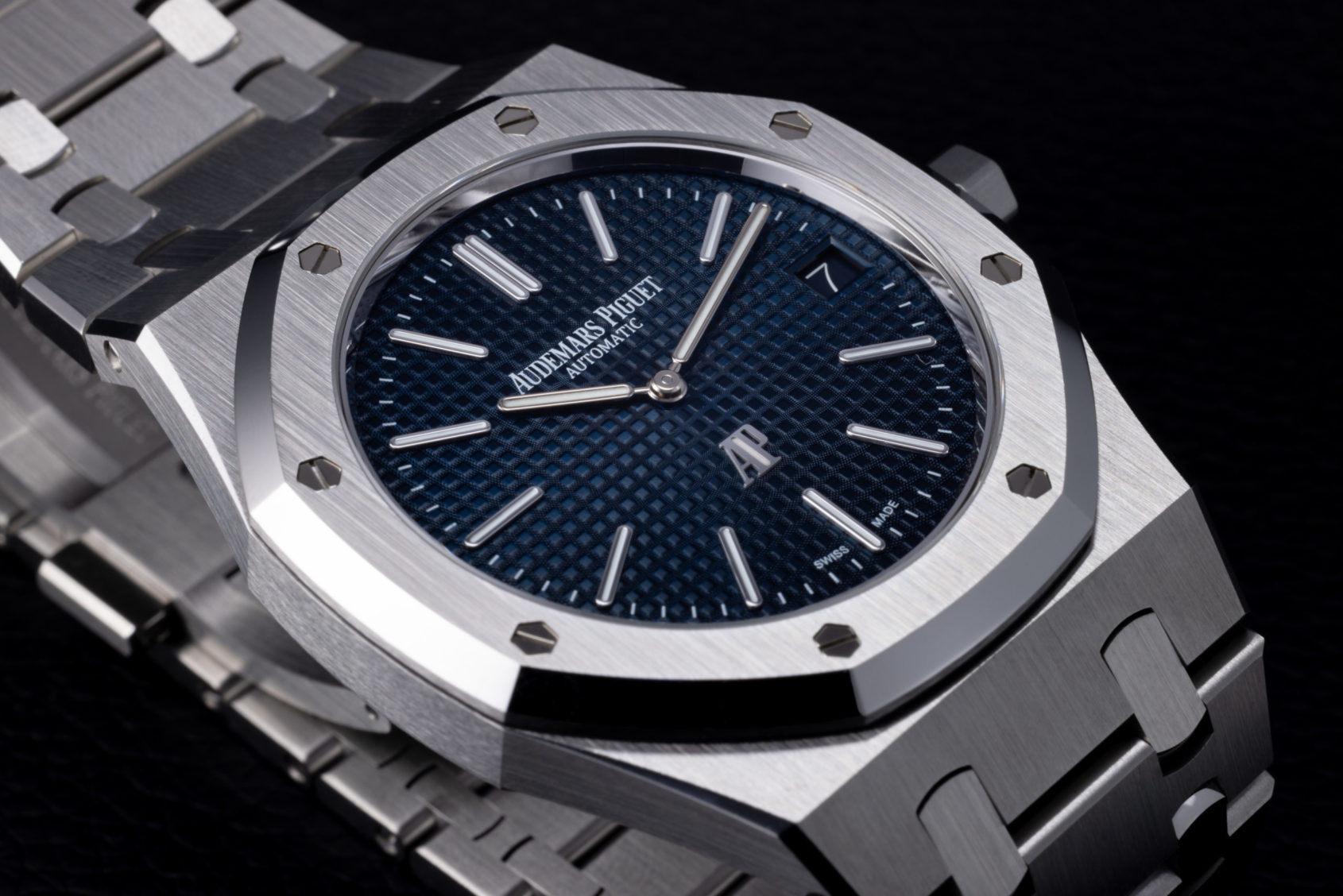 For those more familiar with the dimensions of the Audemars Piguet Royal Oak Jumbo Extra-Thin, you likely already know the now discontinued ref. 15202 carried a diameter of 39mm and a thickness of 8.1mm – dimensions the new ref. 16202 maintains. The case also maintains the incredible hand finishes collectors drool over, with rich vertical brushing on the top facing elements of the case and bezel and polished accents on the outer perimeter of the bezel, as well as on the bevels of the case flanks and lugs. 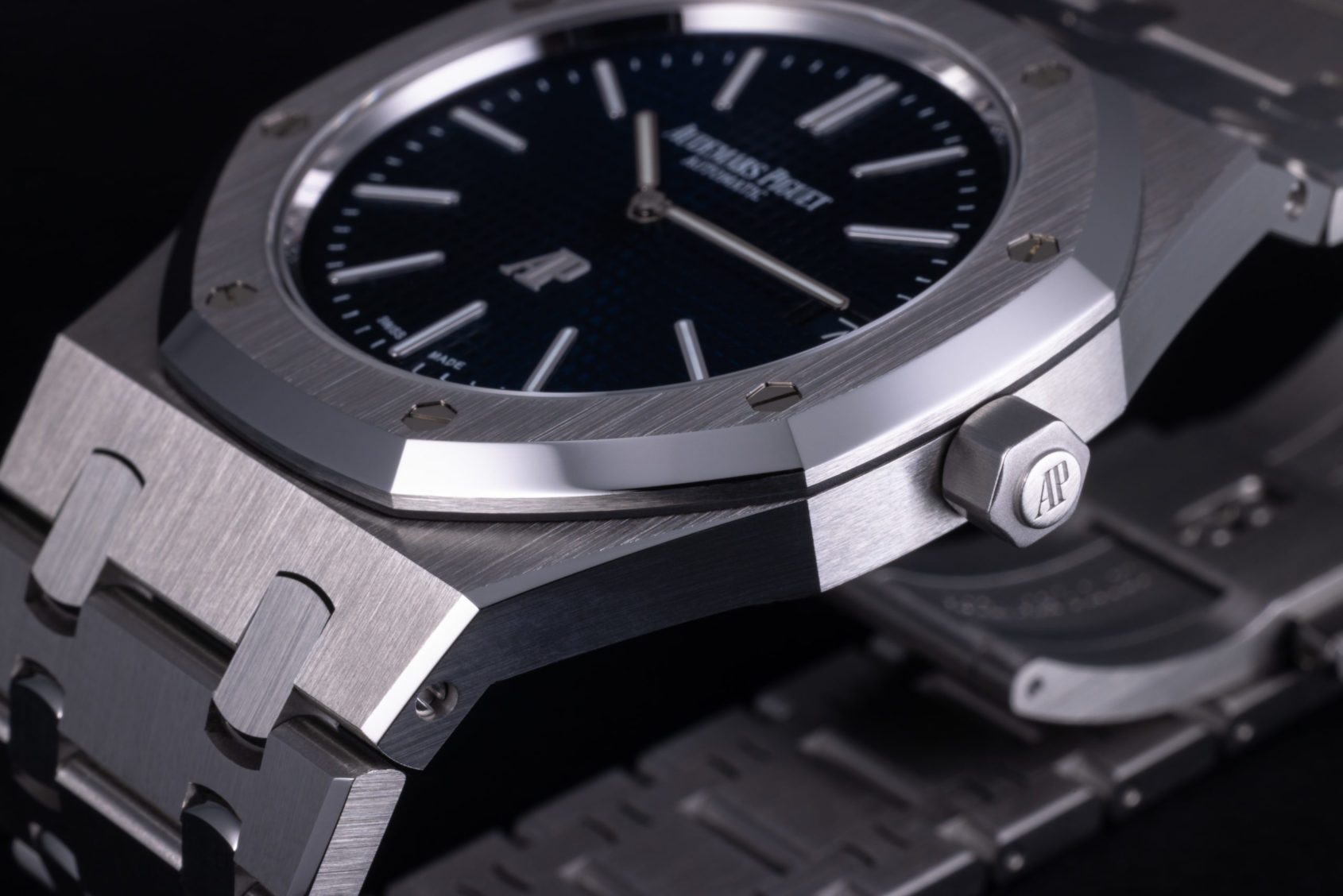 True to its sporty purpose, the case still has a depth rating of 50 metres – by no means a dive watch, but capable of surface swimming without fear. While the original Royal Oak of 1972 had yellow gold screws, AP has elected to keep the case-tone matching hexagonal screws found on the 15202ST. Having had it on the wrist, my smaller sized wrist for that matter, I can confirm it sits well and low and it perfectly cambers around the wrist to ensure centering and comfort. 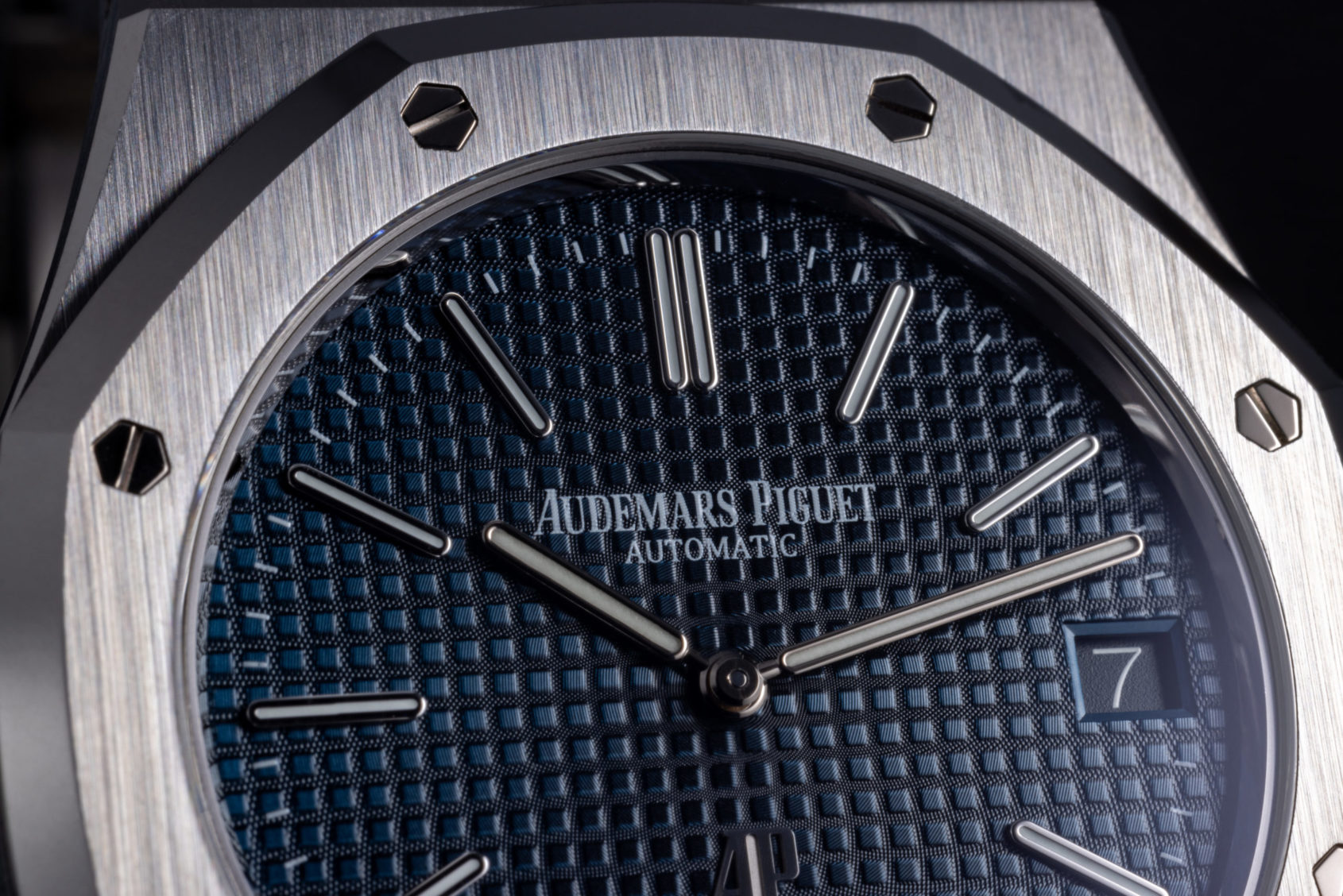 The 16202ST utilises a refined shade of blue for its “Petite Tapisserie” patterned dial, specified as “Bleu Nuit, Nuage 50”, which more closely mimics the original shade seen on the 1972 Royal Oak. In simpler terms, the blue is now a darker greyish blue versus the slightly brighter blue found on the 15202ST. Audemars Piguet explains: “The dial’s Bleu Nuit, Nuage 50 colour was originally developed by Geneva-based dial maker Stern Frères. The blue hue was obtained by immersing each dial in a galvanic bath. While the formulation of the mixture is important, the duration and temperature are both crucial. If the artisan removes the dial too early, it comes out purple, if removed too late it turns black. A thin layer of varnish mixed with a few drops of black colour (n° 50) was then applied onto the dial to protect it. The term “nuage” refers to the cloud effect the drop of black creates when it enters the protective liquid varnish. Today, the Bleu Nuit, Nuage 50 hue is achieved internally through PVD (Physical Vapor Deposition) to ensure a more homogeneous colour across the collection.” 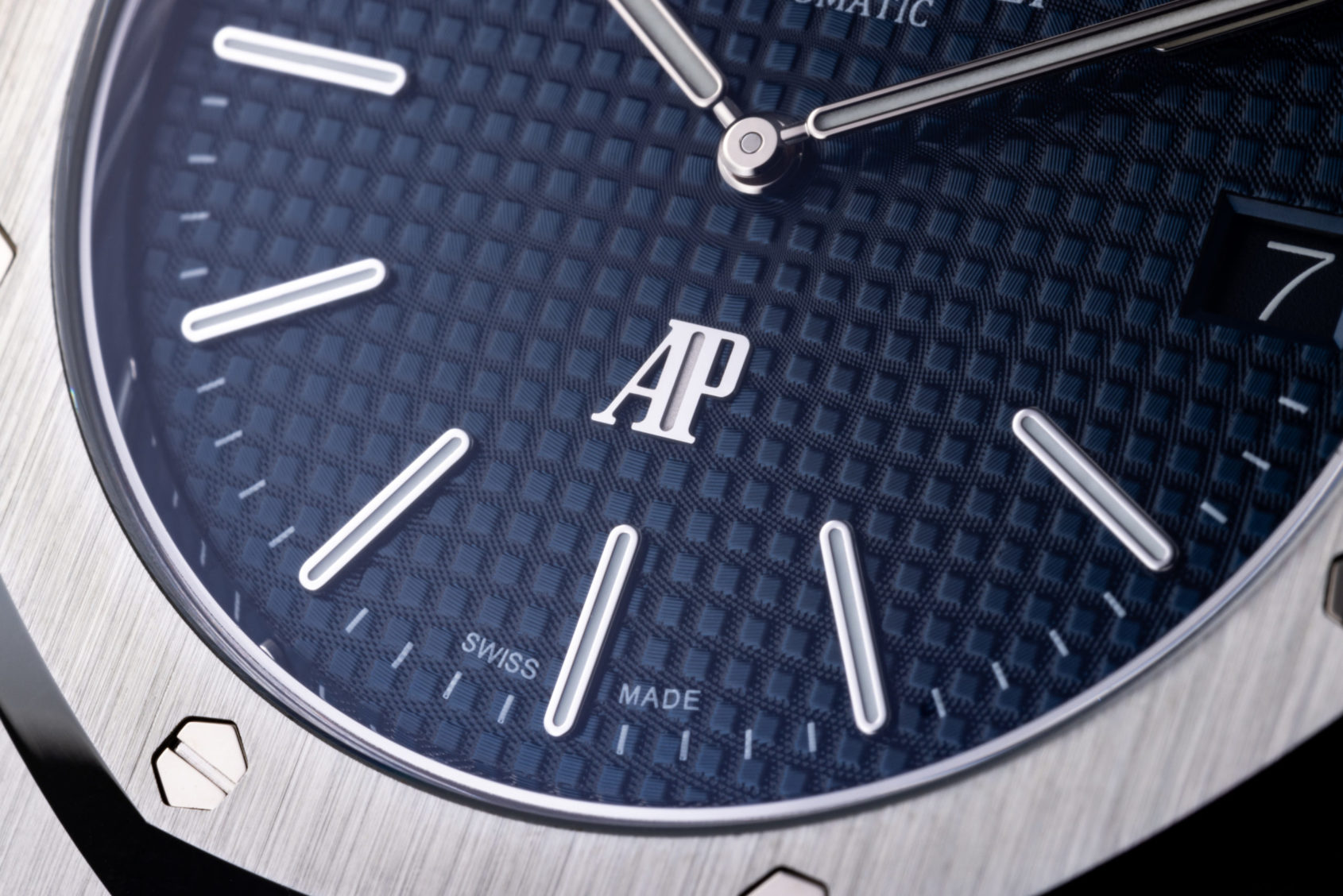 In person, there are almost moments where it can appear dark grey or near-black. Only under sufficient lighting does the blue really let its presence be known. Besides that, the layout remains the same, with white-gold baignoire “bathtub” shaped hands, applied white-gold baignoire “bathtub” indices, and applied “AP” logo at the 6′ position. At 12′, you’ll find “Audemars Piguet” and “Automatic” printed in white. Both hands, along with the applied hour indices, are filled with a luminescent coating to ensure visibility in darkness. At 3′, the calendar complication assumes the standard real estate – the discs tone-matched to each of the four 16202 dial colours. 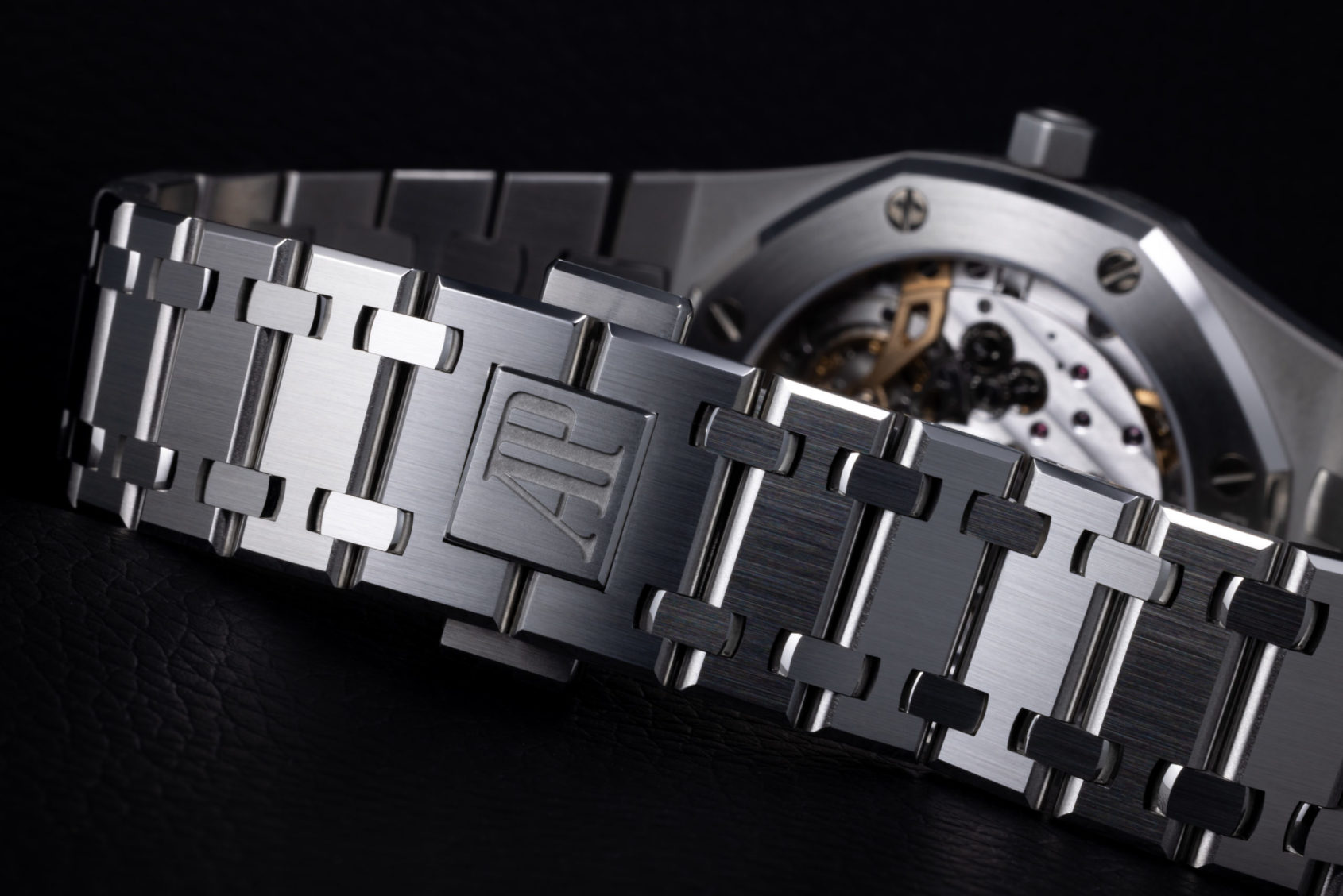 As expected the bracelet is equally as stunning as the case. Even to those less initiated in the nuances of watchmaking, it clearly conveys a whole other level of top-tier hand finishing – with many hours spent realising its form by the craftsmen and women of Audemars Piguet. Hypnotic is an understatement. When you do wrist roll, the links as they articulate, as well as the shouldering bevels of the links that continue the tapered bevel introduced by the case, glisten like no other. Genuinely, there are few bracelets, if any, more stunning than a Royal Oak bracelet. Each of the sizable links can be adjusted via their screws, and the butterfly clasp perfectly centres and secures the watch on the wrist. As you may have read in my inaugural What Tweaks My Tourb, I can be a bit of a clasp-nazi and have particular desires or expectations when it comes to their design. Clasp length has the potential to make or break the fit on the wrist, and, fortunately, the length of the butterfly clasp is just right as to not create unnecessary fixed length.

The headlining aspect of the Audemars Piguet Royal Oak Jumbo Extra-Thin 16202ST for watch nerds is, of course, the new in-house calibre 7121 – replacing the usage of the JLC 2121 ebauche AP has used for the last 50 years. With it comes a bunch of improvements that increase the aesthetic and performance appeal for buyers. Firstly, the power reserve has been extended from 40 hours to 55 hours. Secondly, the calibre 7121 introduces a full pink-gold balance bridge that protects the movement and its timekeeping against shock. There also appears to be a second full bridge, also in pink gold, above the barrel as well. Thirdly, the beat rate has been raised to a more modern 4 Hz (28,800 vph) from 2.75 Hz (19,800 vph) – also helping the calibre maintain accuracy in the face of shock. Lastly, from an aesthetic perspective, the calibre layout makes better use of the real estate its diameter allows – the bridges taking up more space and the ring framing the bridges of the previous 2121 no longer present. 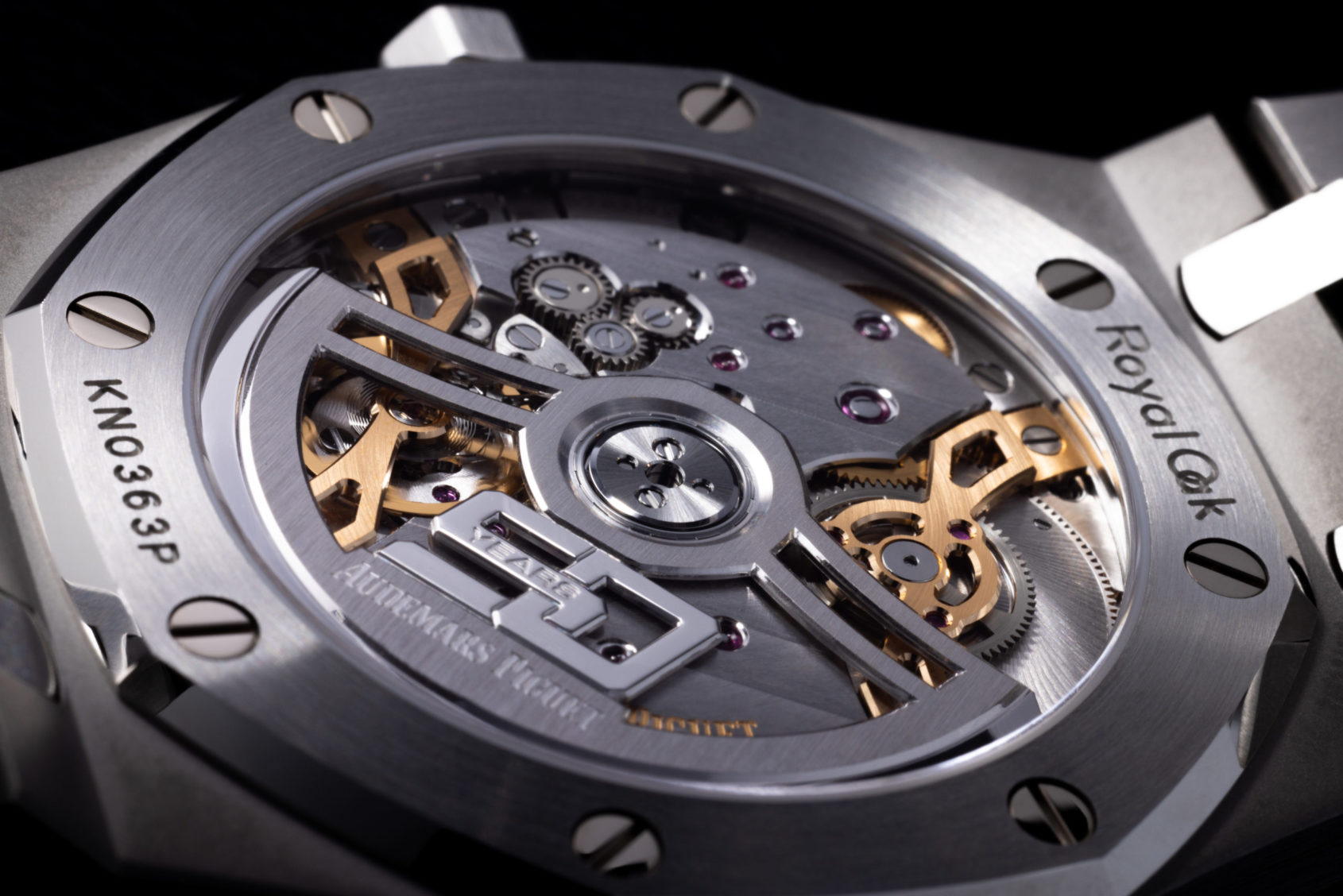 “Five years of development were necessary for the realisation of the new Calibre 7121, which is endowed with more energy than its predecessor thanks to its new construction. Its larger barrel confers it more power, making it more precise for a longer period of time. It is also equipped with a contemporary central oscillating weight mounted on ball bearings that utilises two reversers developed in-house to ensure bidirectional winding. Its balance wheel is fitted with inertia blocks that have been directly inserted within the balance wheel to avoid unnecessary friction. In addition, Calibre 7121 is equipped with a patented extra-thin low-energy date-setting mechanism.” – Audemars Piguet

In terms of its decoration, AP has ensured expectations will continue to be met with well-executed Côtes de Genève, traits tirés, and circular graining that can all be admired through the sapphire exhibition caseback. The pink-gold bridges are richly brushed like the case and bracelet, the tone and finish an interesting mix against the more traditional appearances of the rest of the calibre. The final note about the calibre 7121 is its brushed and chamfered open-worked 50th anniversary commemorative 22k gold rotor, which is executed in a case-matching tone for each of the four new models. This rotor, however, is not permanent, and will only be found inside these watches until December 31st. Once we hit 2023, the rotor will revert to the familiar format seen before – giving those who secure one in 2022 a point of differentiation.

The precious siblings in yellow gold, rose gold, and platinum 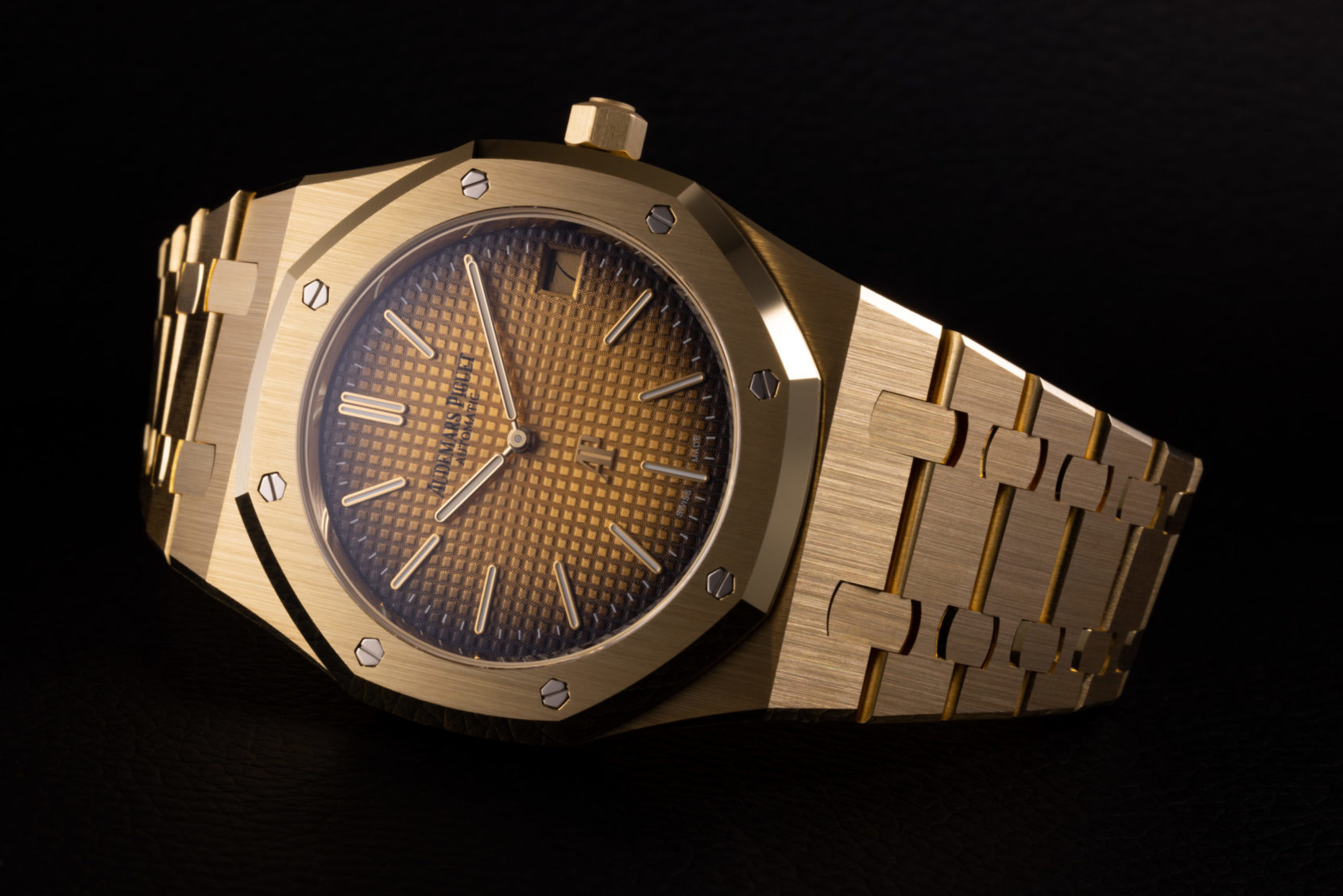 Now I have to confess, I’ve held in hand the new steel 16202ST, and the previous generation 15202 in platinum with a smoked green dial. But this new yellow-gold take on the Jumbo I got to also check out would be my personal pick. The gold-toned dial is incredibly striking in the metal, and the classic hue of yellow gold really displays the fruits of AP’s hand-finishing labor. 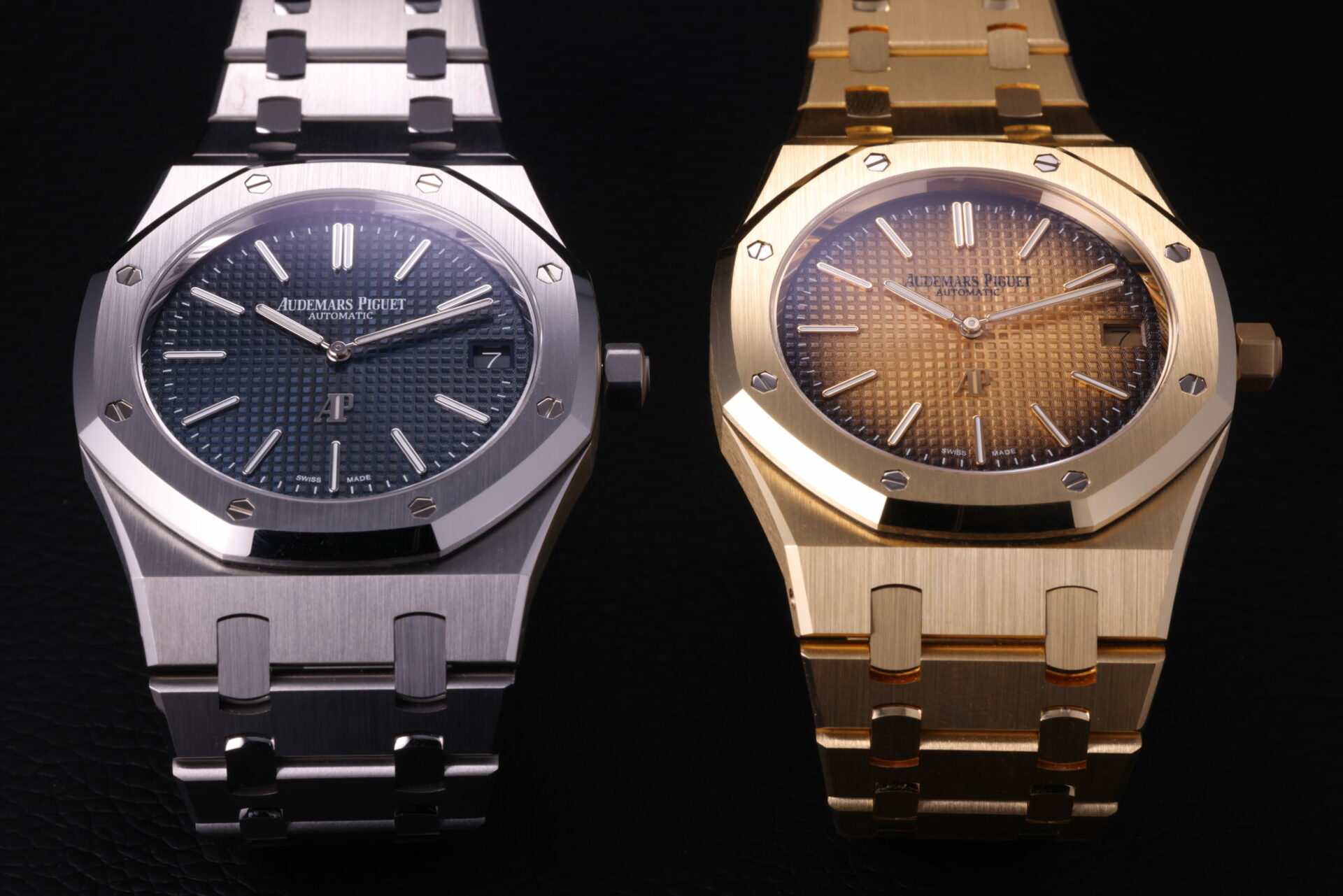 It also is so different from anything else I have ever seen. Sure we have champagne gold hues across many references and brands, but this really is in a league of its own. While Extra-Thin, the heft oozes tactile luxury and feels great on the wrist. My first thought, besides how much is my kidney worth, was this would be a great reference for Mark Ronson to bring into his collection. It kind of has 70s’ vibes due to its colour scheme that I really like. 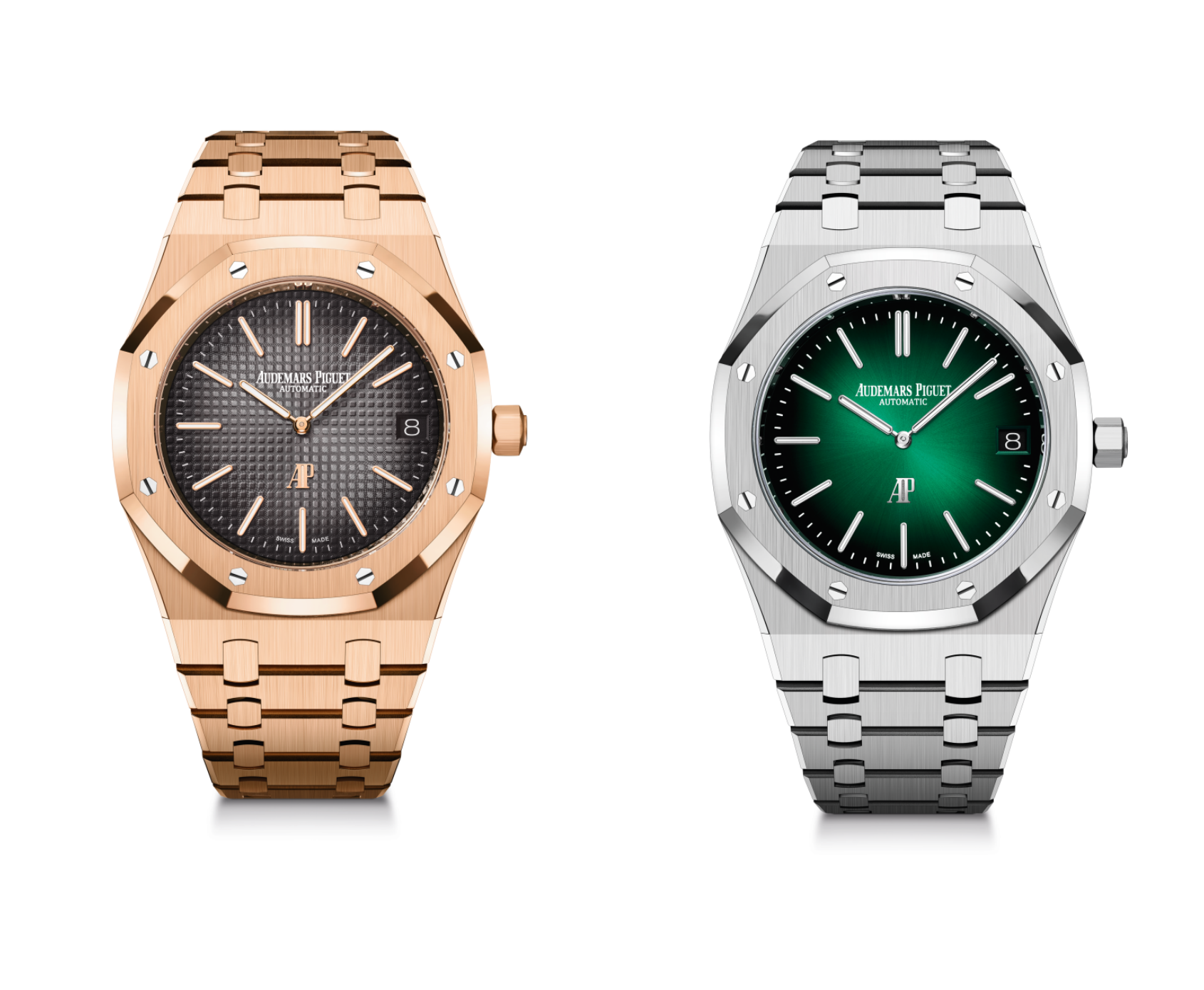 Unfortunately, I was not able to get hands-on with the new rose-gold variant, nor the next generation of the platinum Jumbo with a smoked green dial. But, having held the previous generation, which is effectively the same with a new calibre, I can safely infer the platinum configuration remains gorgeous in the metal. The rose gold has the most subtle gradient dial, a smoked grey with “Petite Tapisserie” pattern. It is a nice contrast that lets the rose gold do the talking. Any of the four you are able to secure, however, you cannot really go wrong. And speaking of securing a watch, Audemars Piguet notably mentioned that across all their introduced novelties today that, while they will continue to allocate watches to VIP clients, they will begin to set aside dedicated allocations for “newcomers” to the brand. So definitely visit your local AP boutique or authorized dealer the first chance you get if you are interested. There may be hope yet. 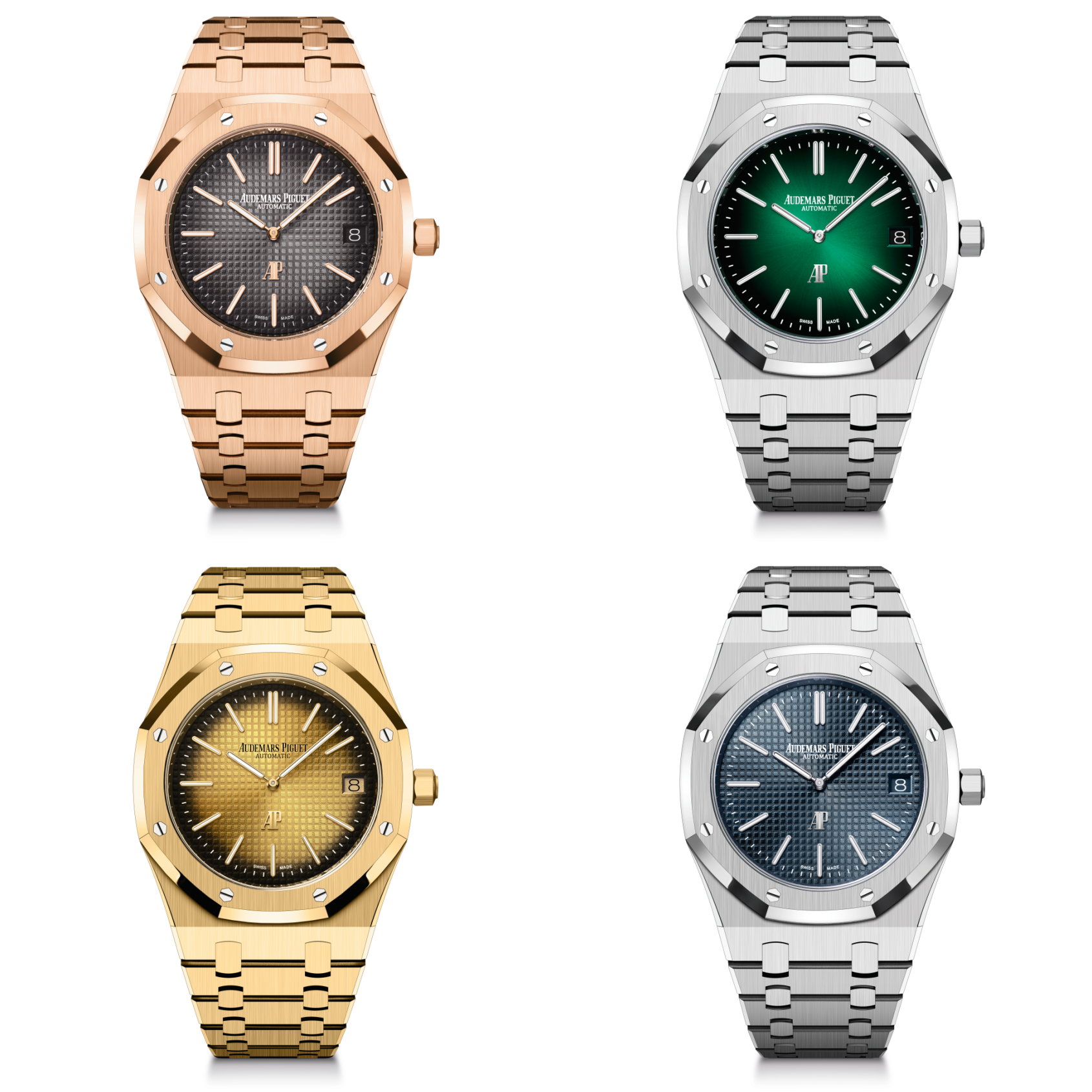