Forget Swiss neutrality, Moser are not a brand afraid to court controversy. This was made abundantly clear in January 2016, when they revealed a new watch in response to the launch of the Apple Watch from the previous year. The Moser Swiss Alp Watch was born as a satirical take on the watch industry’s mad rush to make connected watches. It borrowed distinct visual cues from Jony Ive’s Apple Watch with its round-edged rectangular case but housed one of Moser’s in-house mechanical movements rather than any touch-screen tech.  Now the brand introduces the last chapter in this delightfully subversive exercise in the form of the all new Moser Swiss Alp Watch Final Upgrade. 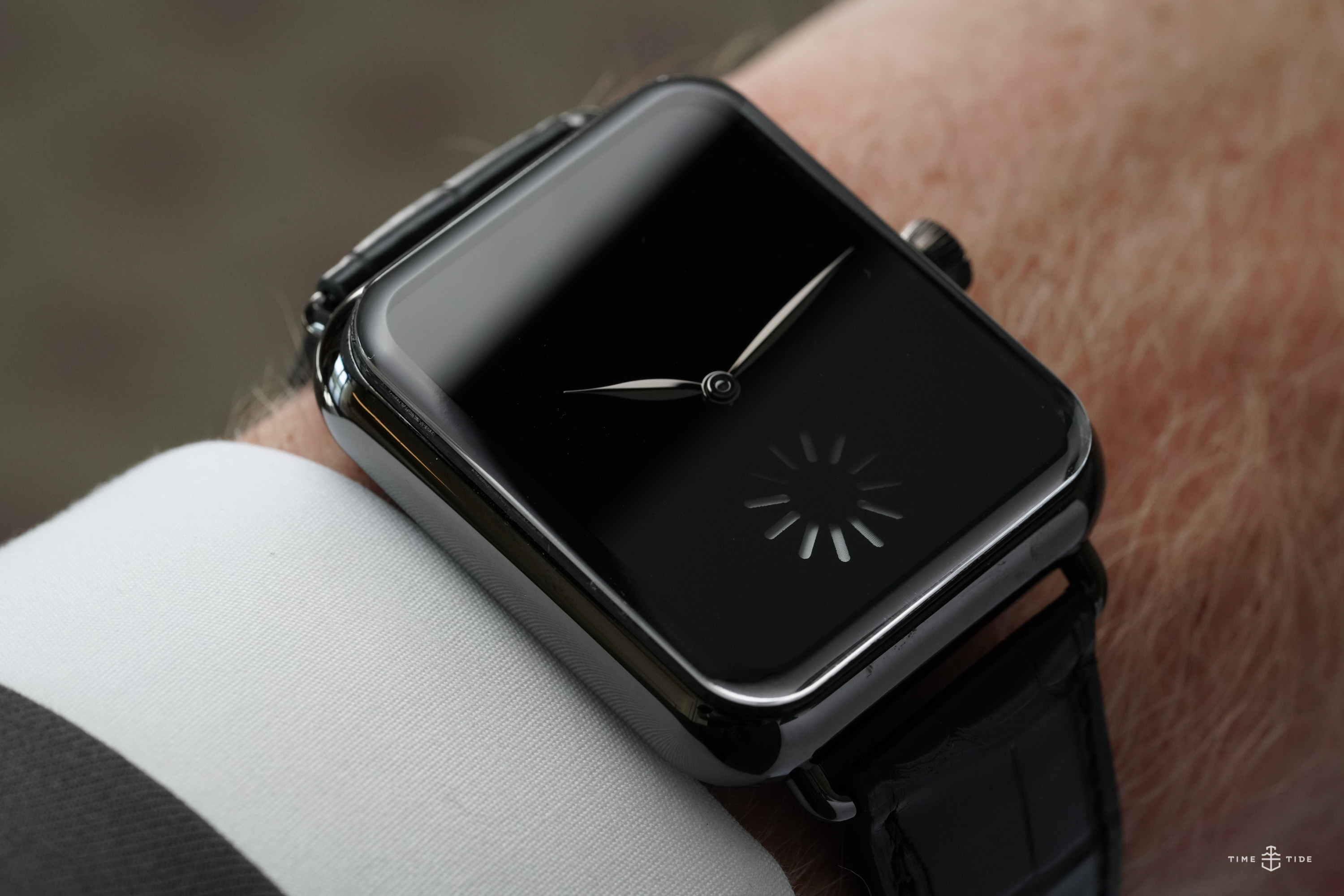 When first launched in a 50 piece limited edition in 2016, Moser were bullish about the need for a proactive response to the smartwatch’s inroads into the industry. In their original press release for the Swiss Alp Watch launch they pulled no punches.

“As the challenge of the smartwatch emerged, it threw Swiss watchmaking into turmoil. However, the complete lack of a response from most market players is remarkable in itself. Doing nothing and waiting for the threat to pass is certainly a dangerous course, but it is less offensive to Swiss watchmaking than the opportunists’ approach of combining traditional, high-end watchmaking with already-obsolete technology such as connected bracelets, NFC/RFID chips and other outmoded interfaces.”

Moser took less than 12 months to release a standard production of the Swiss Alp Watch as their cheeky form of ongoing protest. This year will be the last time we see a new expression of the softly curved rectangular case, and I for one hope this entire collection is remembered as a horological take on David boldly confronting a new breed of Goliath. 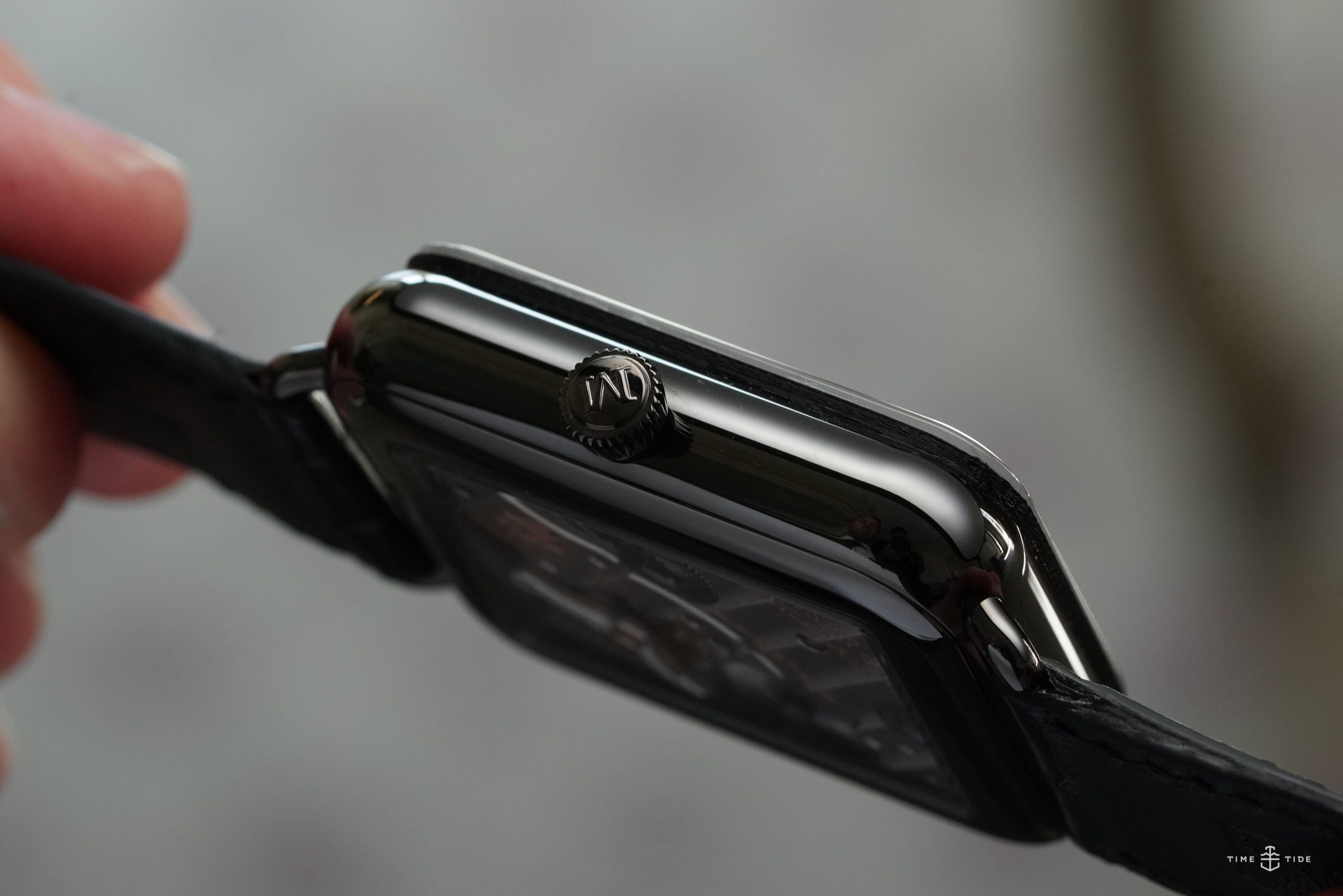 Unlike many of the references that have come before in the Swiss Alp Collection, the case of this final execution is DLC-coated steel. It maintains the same dimensions as the rest of the collection, chalking up a decent 38.2mm wide and 44.0mm from lug to lug, but is more than wearable in its thickness at just 10.5mm. 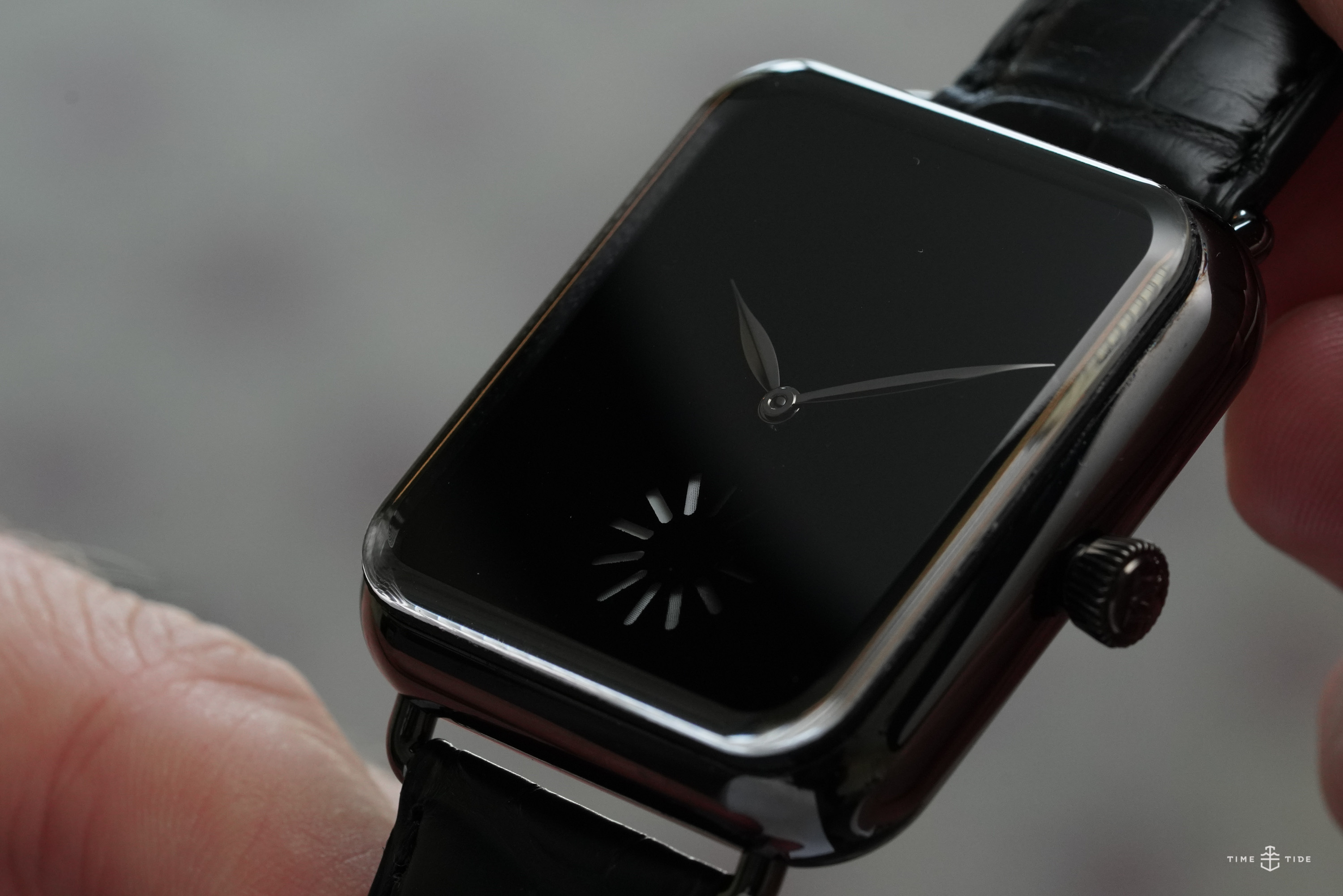 The case features the same soft curves that we have all seen on thousands of Apple Watch-clad wrists around us with sapphire crystal covering both the dial and the caseback, creating a touchscreen-like look from the front and a view of unquestionable haute horology from the back. The crown is signed with an “M” for the first letter of the brand and is big enough to wind the manual mechanical movement to life. 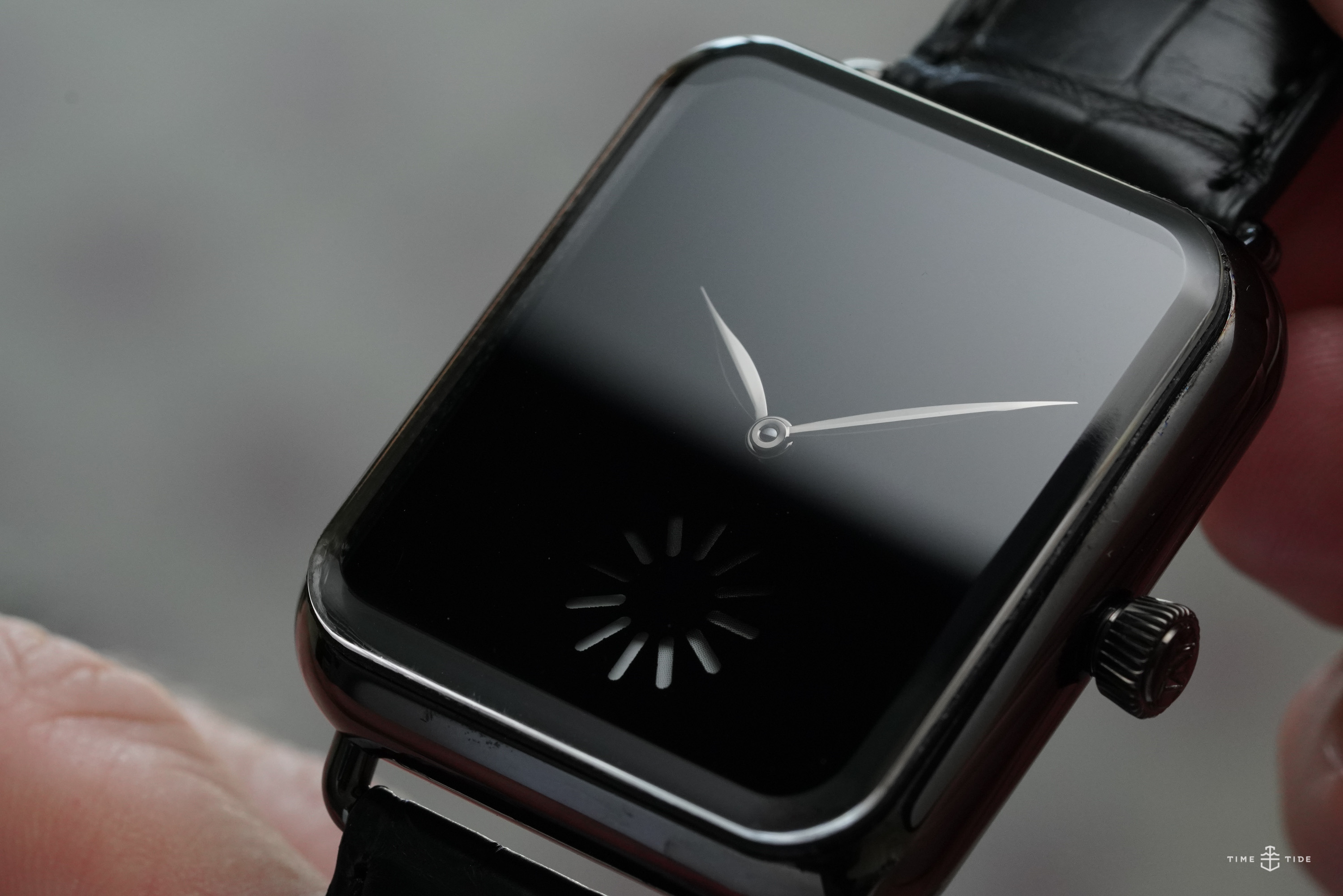 The dial echoes the inky blackness of a blank screen that stares back at you when your phone dies. Covered with a material that Moser has taken a dark shine to in recent years, the Vantablack coated surface is not only black, but it literally absorbs the light around it. The leaf-shaped hands have also been blackened to accentuate to darkness while minimising contrast against the dial. 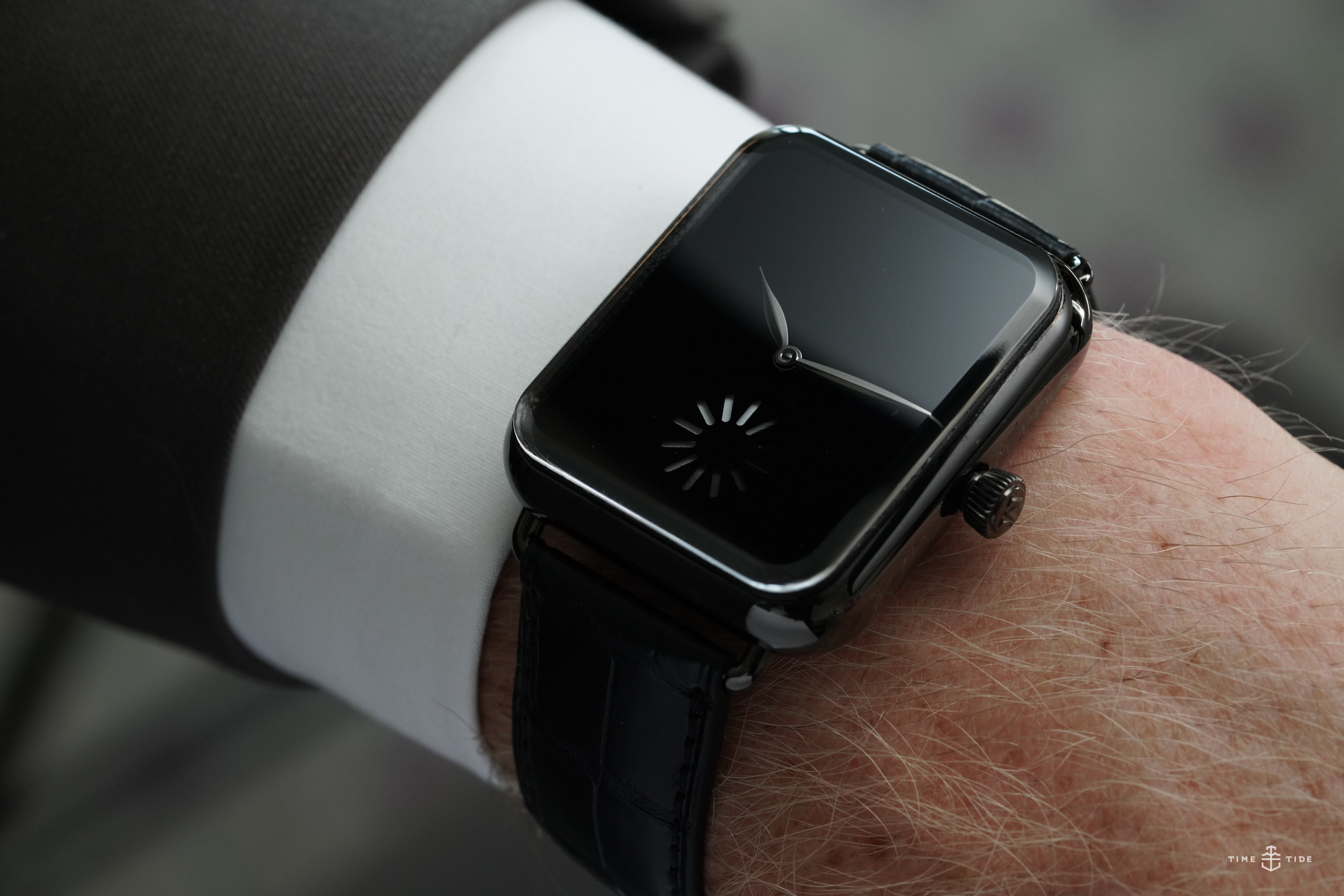 The most important change to the dial is the sub-seconds register at 6 o’clock, which has been designed to look like the spinning wheel of death that we are all used to seeing on our computer screens. By looking like a loading icon in motion, it offers pause for thought, perhaps about how much more efficient our lives really are thanks to technology, or perhaps about the time we have left on this earth while we wait for things to load. It is undeniably a final dig at the increasing reliance we have on our smart devices. 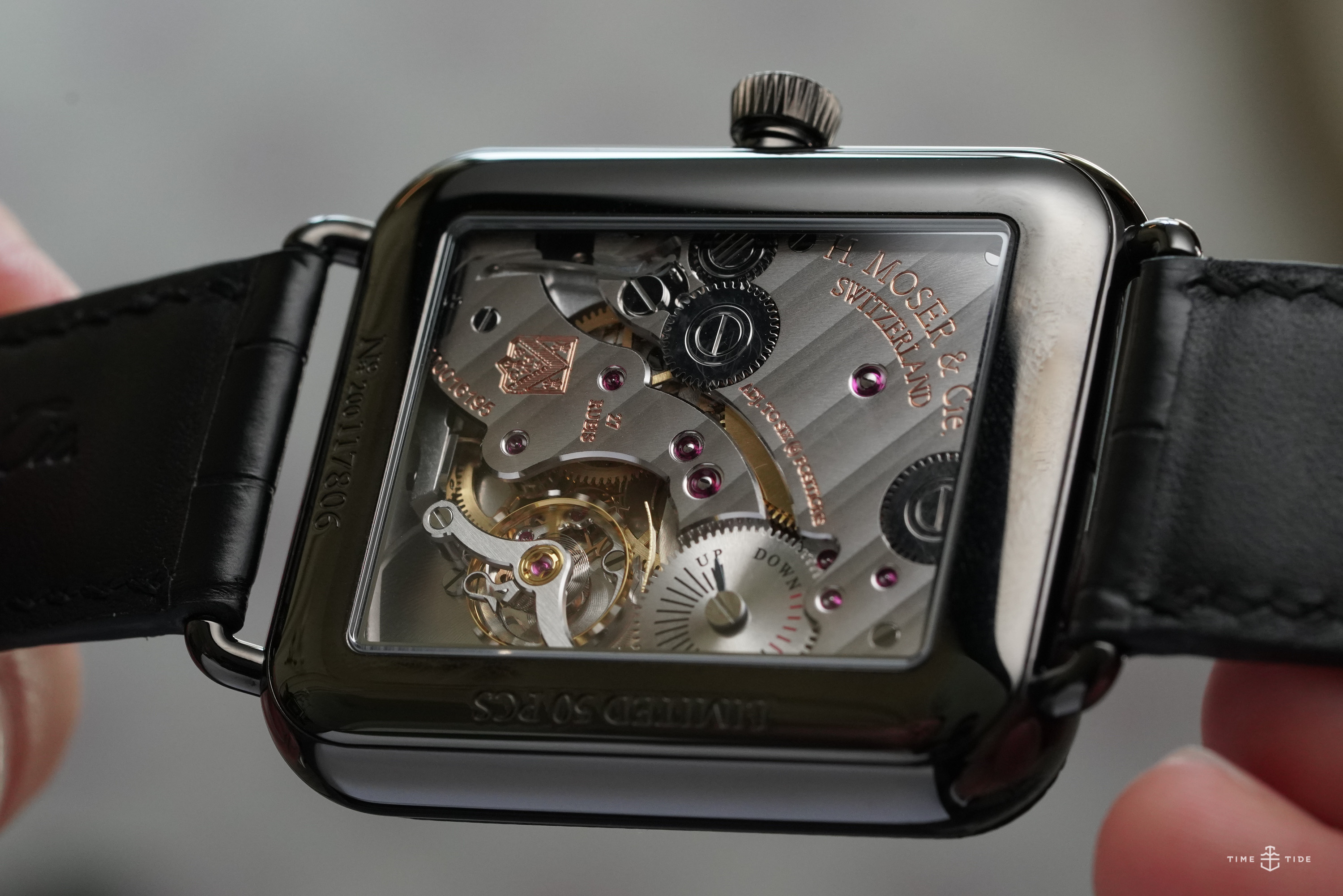 No matter which way you look at it through the sapphire crystal caseback, it’s a beautiful movement to behold, with an array of expert finishings. It is on the movement side of the watch that you can see the power-reserve indicator, which lets you know how far into the four days of power reserve you have remaining. 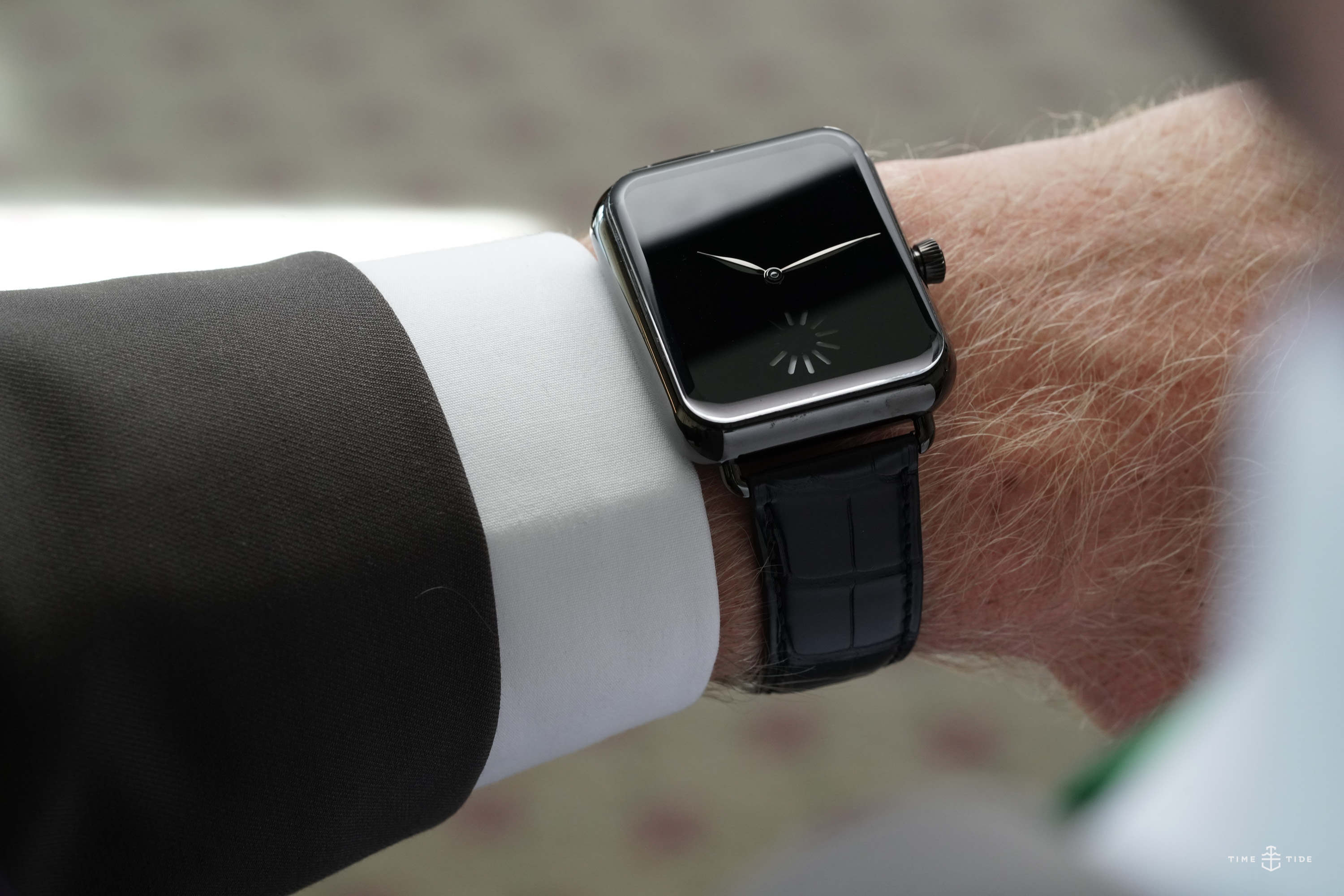 Secured with wire-like lugs reminiscent of pocketwatch-converted trench watches, the watch arrives on a black alligator leather strap, to complete the fully murdered out look.

The Moser Swiss Alp Watch collection has occupied a special place in the watch industry over the last half decade, and the Final Upgrade is a thoughtfully executed bookend to this wearable form of industry commentary. When I talk to my friends who aren’t watch geeks about modern day watchmaking, the Swiss Alp Watch is one that engages them more than most examples of fine horology that I thrust under their noses. Not just because it looks like a smartwatch, but because it makes a social statement about our world today, and the things that most people value. It’s closer to Banksy than it is to Rembrandt, and there’s something to be said for that. 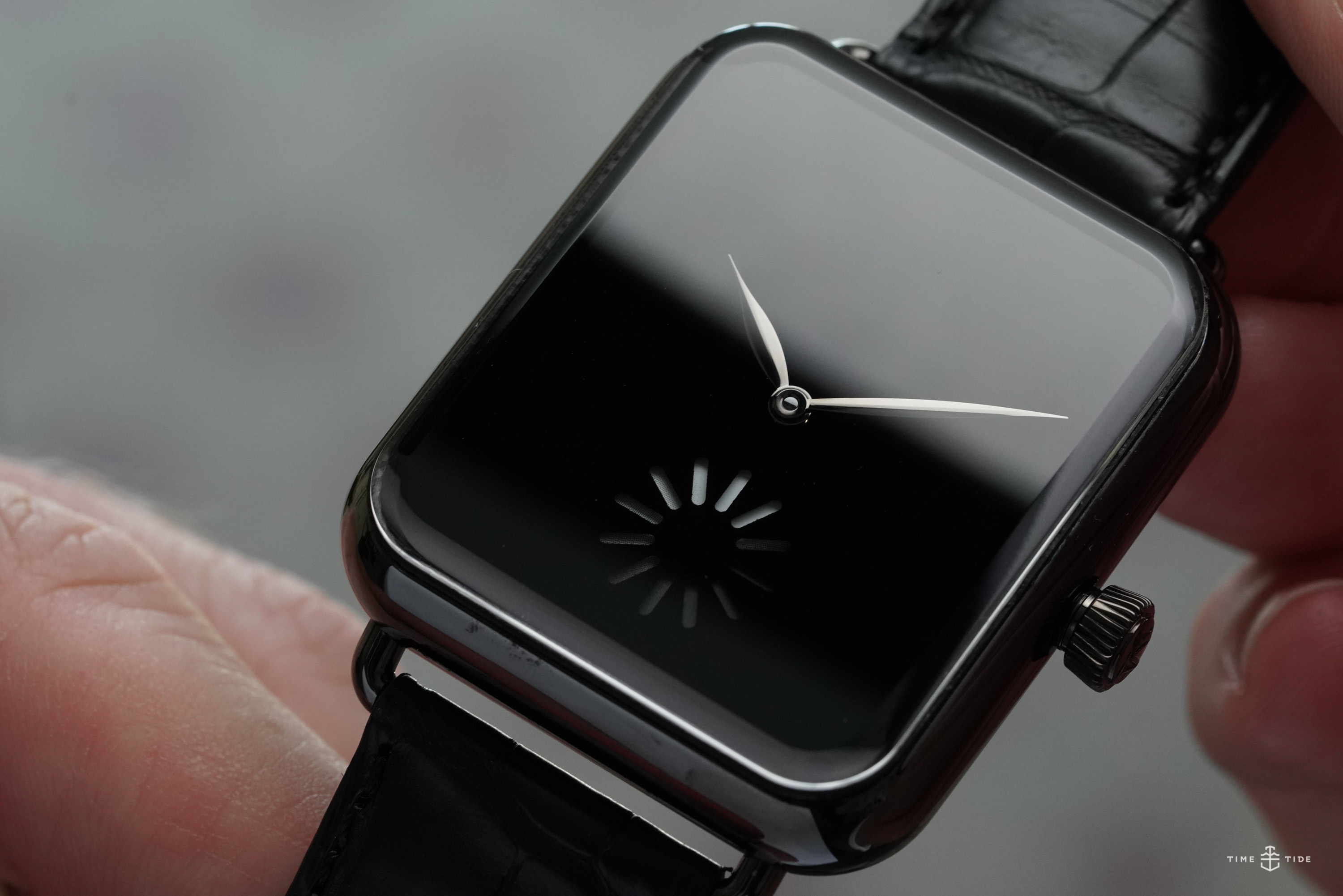 The Moser Swiss Alp Watch Final Upgrade is $47,800AUD and is limited to 50 pieces worldwide. It will be available in Australia from Hardy Brothers. For more details, visit H. Moser & Cie. right here.

Made in partnership with H. Moser & Cie.. However, the opinions expressed in this article are our own in accordance with our Editorial Policy.