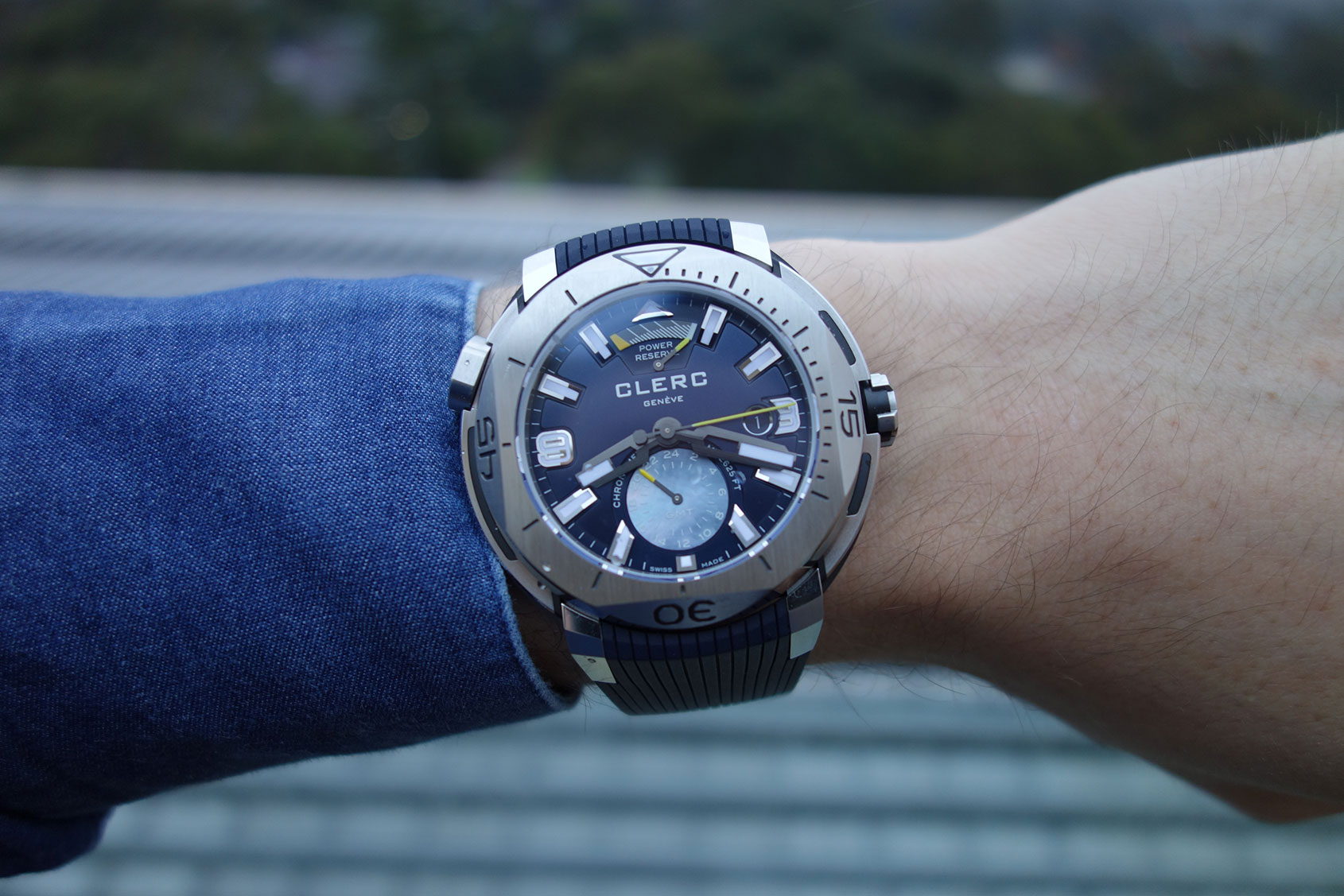 When the opportunity to spend some time with the Clerc Hydroscaph came up, I was keen as mustard. Having only ever seen the brand in passing, I was eager to try on one of their distinctively styled divers. My tastes are fairly traditional when it comes to aquatic-oriented watches, and Clerc was well and truly out of the ordinary. The thought of stepping outside of my comfort-zone was a little dangerous and yes, I’ll admit it, exciting. 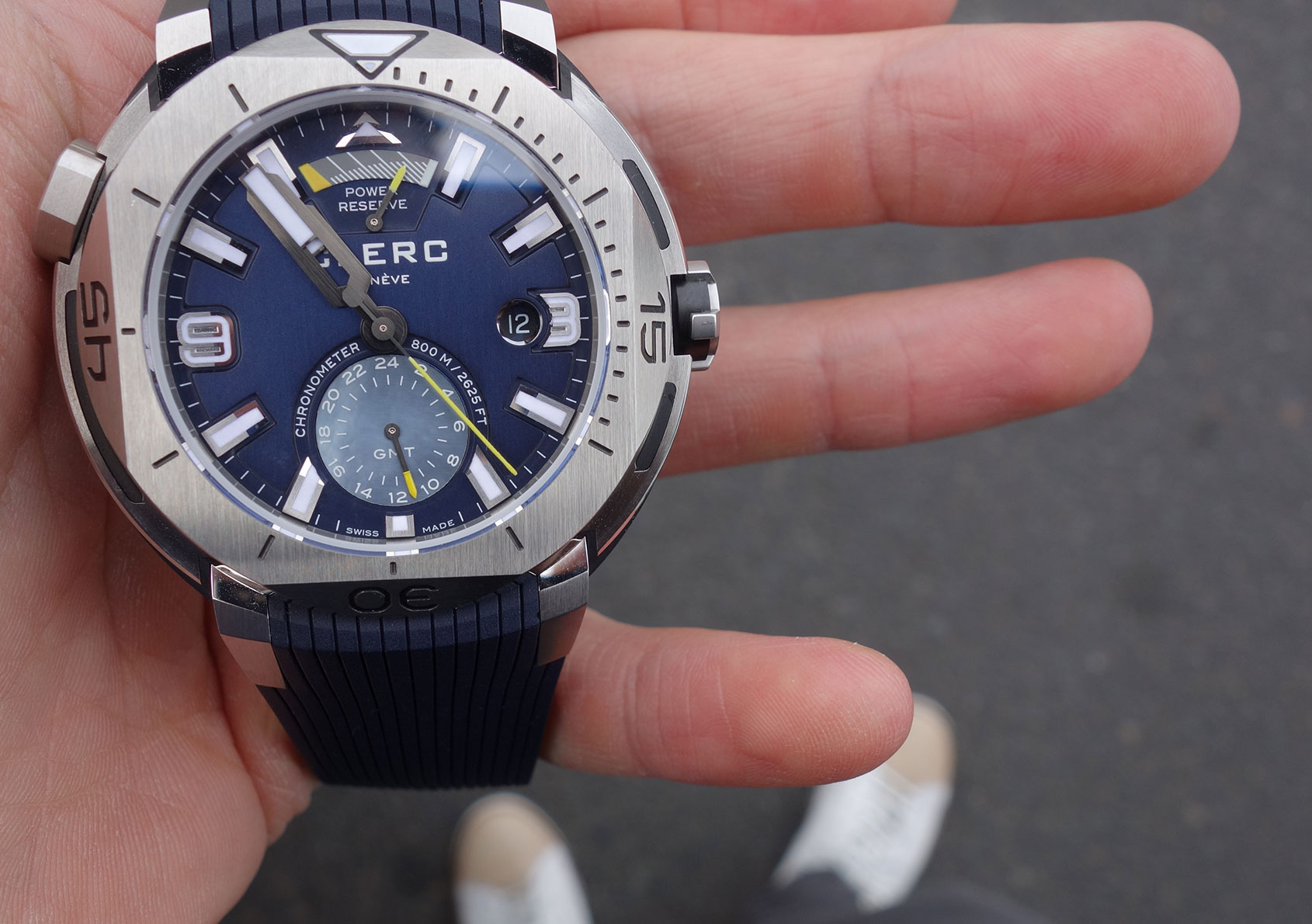 When I found out I’d be wearing the impressively titled Hydroscaph GMT Power-Reserve Chronometer in midnight blue I was pretty pleased, as I’m a big fan of the colour blue (second only to green, of course). Opening the box I was struck by just how blue this watch was, especially with the hands and matching rubber strap. The bold colour and design was matched by the size. I was taken aback by the sheer scale of the case. But as I sized up the strap, I found it felt comfortable on the wrist. As I set the time, and tinkered with the distinctive bezel, the quality and solid build of the watch became obvious.

On the wrist I found the vulcanised rubber strap exceptionally comfortable, giving great control over the watch; it never felt too top-heavy thanks to the dual springbar system – The Hydroscaph uses two springbars instead of one. Of course this makes changing or finding alternate straps challenging. None of this changes the fact that it’s a very chunky watch. That said, if you’re going to make a large, 800-metre rated diver’s watch you might as well go big or go home. 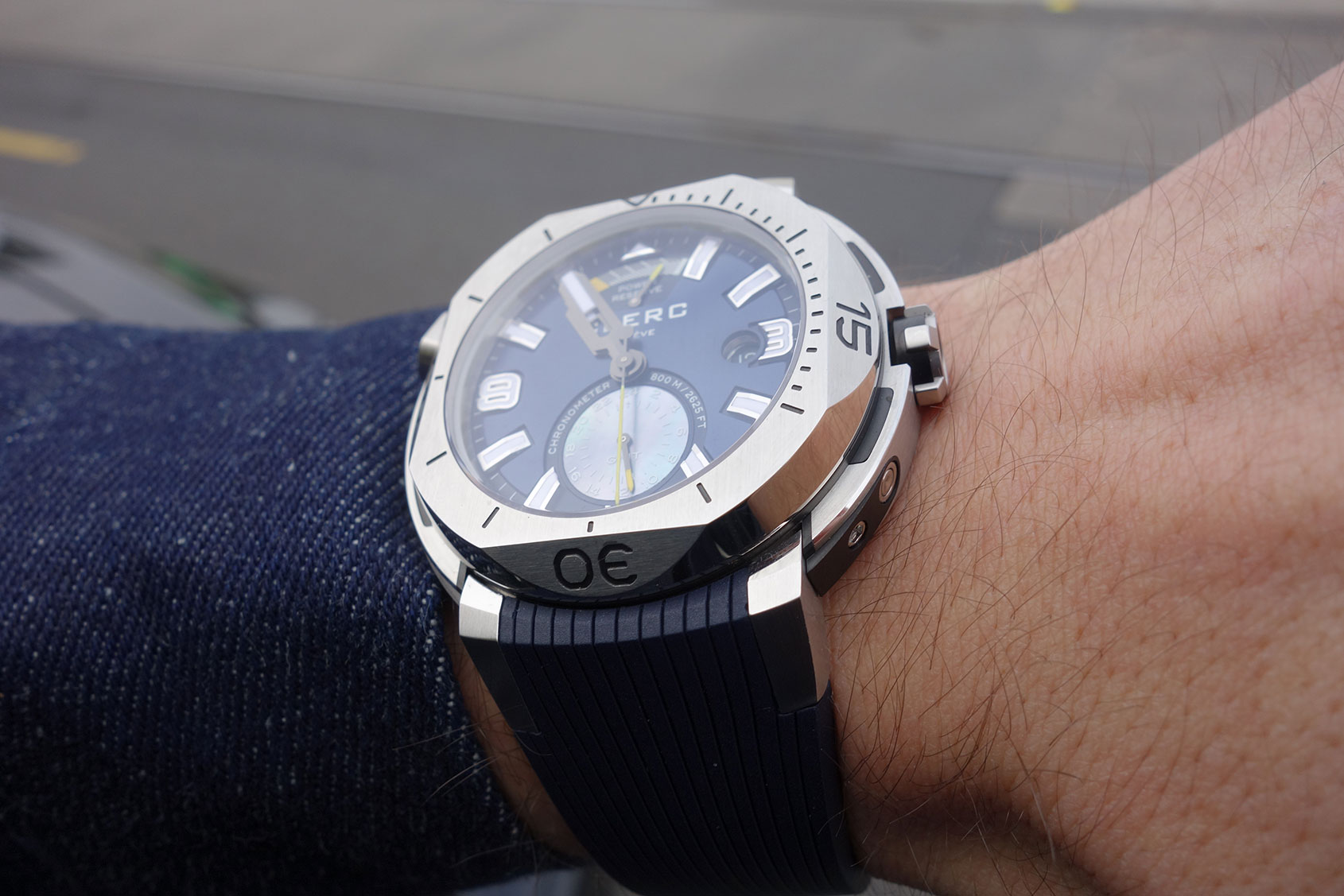 As the days passed, I found myself becoming more accustomed to the size of the Hydroscaph. At a smidge under 44mm (43.80mm) across, I had no doubts that the angular case could handle any heat, or pound-per-inch pressure thrown its way.

When it came to legibility I had absolutely no issues. The oversized lume plots and large hands do the job, and do it well. There’s no luminous material on the bezel, which is a feature you might expect, but it’s not a deal breaker. To turn the bezel, you twist the bezel lock. This was something I quickly became addicted to, probably because of the the rewarding sound it makes. A cool feature. It’s also worth noting that Clerc hasn’t skimped on the sapphire – using a particularly tough 4mm thick crystal. 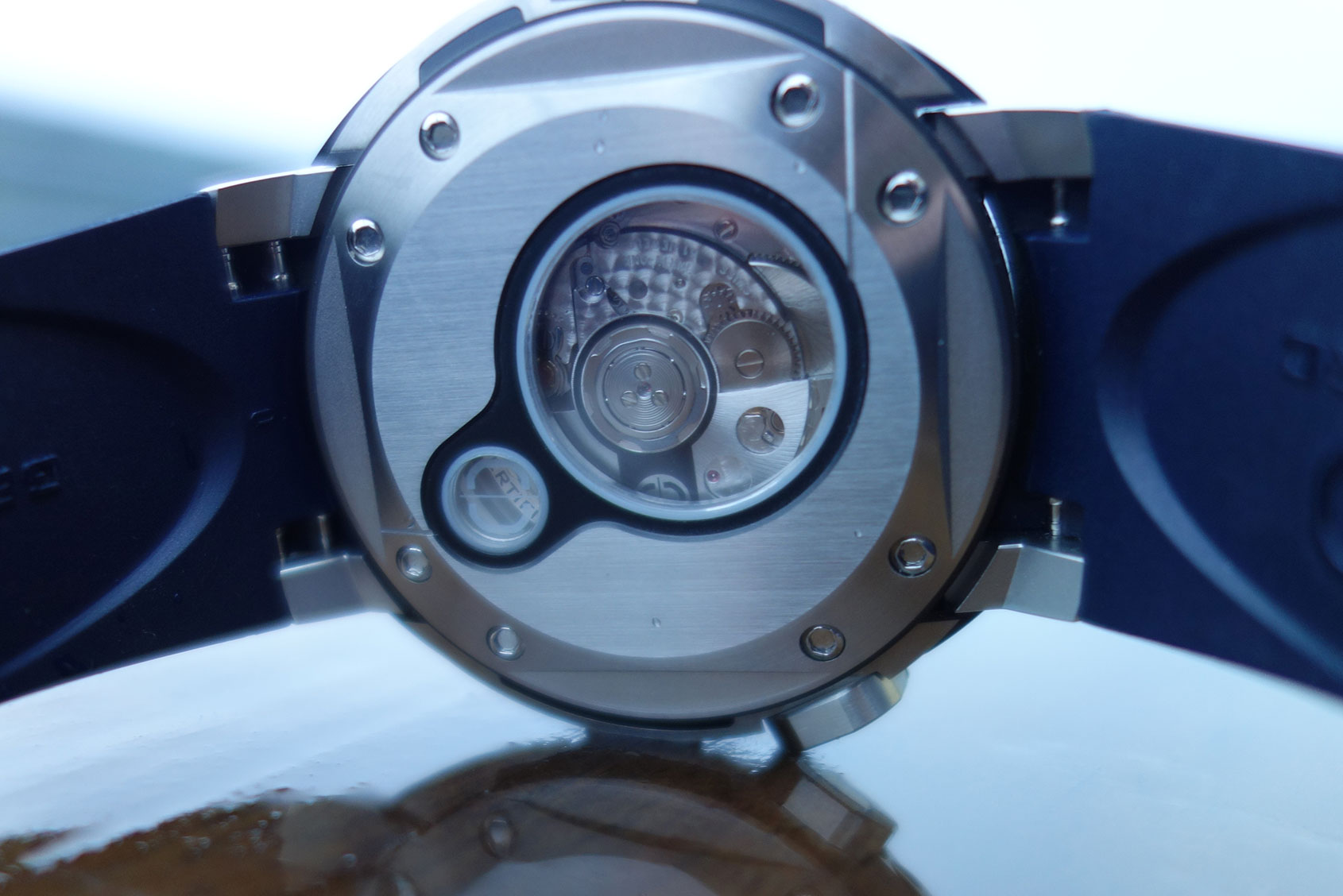 Powering the Hydroscaph is the Calibre C610, a COSC-certified movement exclusively supplied to Clerc. The automatic movement is visible through the porthole aperture on the caseback. In terms of functionality it boasts an oversized 24-hour dual-time display at six o’clock (in a mother of pearl subdial no-less), and a sporty-looking power reserve indicator at 12 which is, in my opinion fairly redundant as the movement only has 42 hours of power reserve.

I have no doubt the Clerc Hydroscaph GMT Power Reserve could easily stand up to any diving duties it might face. It’s an offbeat choice, well suited to thrill seeking adventurers, or desk divers looking to make a statement with something different.